Throughout my life, going on sixty-two years now, there are three things besides family and friends that get me through the stress and dramas of day-to-day living. Obviously, being a writer for MMORPG.com one is video gaming. After that there are comic books and one of my most passionate loves...music! I’ve always had the desire to meld these topics and write about comic book writers or musicians who fold video gaming into their careers.

Luckily for me, earlier this year I was able to connect on the musicians/video gaming idea! Read on as I had the chance to interview DragonForce, the Grammy-nominated Extreme Power Metal band based in London, England about their love of video games and how it affects their music!

Any Opportunity Presents Itself

My love of music has always fallen into the Classic Metal category. I own 850 vinyl LPs and over 3,000 CDs and music by DragonForce is among them. While I own music by DragonForce I had never pursued to see them live. Earlier this year my son-in-law asked if I wanted to buy a meet-and-greet package ticket and tag along to meet and see the band. Of course, being the music lover, I am I couldn’t resist.

When I met members of the band at the pre-show, I did some name-dropping and tossed around my position at Metal Express Radio, and surprisingly singer Marc Hudson was familiar with our founder. After watching the band’s show that night it was clear how much of a love of gaming, they shared with us! Their stage set included arcade machines with 8-bit games playing as well as digitized stage props and clothing that paid homage to the pixelated era a lot of us grew up in. As a further nod to their passion of all things video-game related, the band frequently incorporates retro game sounds and melodies into their recordings and live shows.

Given my association with the web-based radio station I’ve done a lot of one-on-one interviews with musicians in the past. After seeing DragonForce that evening it occurred to me that this might be my chance to talk to a musician about their love of gaming and its effects on their music. Thankfully singer Marc Hudson was approachable on the web and was more then happy to partake in the interview that follows! Please enjoy!

Marc Hudson: Video games came first. I think I got my first games console (Super Nintendo) for Christmas when I was around 10 years old. It came with Mario All-Stars, and I remember playing it constantly. I then went on to play Zelda: A Link To The Past, Starwing and F-Zero and remember having my mind blown!

MMORPG: Does your love of gaming extend into playing tabletop and board games as well?

MH: No, it doesn’t. I’ve often thought tabletop gaming looks like it would be fun, but I’ve never tried it myself. I used to paint Warhammer models when I was younger though if that counts.

MMORPG: What’s the first video game you remember playing and at what age?

MH: Before I got my first console, I played Kirby’s Dreamland and Castlevania on my friend’s original Gameboy. But my parents wouldn’t buy one for me at the time. I think I was around 7-8 and am still bitter about it today ha-ha.

MMORPG: What are your favorite gaming genres?

MMORPG: Which video gaming systems do you own, and which is your preferred?

MH: Somehow, I managed to get myself a PS5 not too long ago, and that’s pretty much all I’ve been playing. I have a Switch that I take on tour with me, and I also still play my PS Vita.

MMORPG: Any thoughts on VR (virtual reality) gaming? Have you tried it? Would you like to?

MH: I think it’s cool. I completed Resident Evil 7 in VR and that was probably one of the most hilarious and traumatizing video game experiences of my life!

MMORPG: Seeing the band live and knowing they have a song based on the Elder Scrolls’ Skyrim I could guess that’s the answer to this question but what’s your favorite video game of all time and why?

MH: I would have to say Final Fantasy 7. There are loads of other games that I’d prefer to play over that these days, but the story and music from that game has a special place in my heart.

MMORPG: Is there any other video game that you feel connected to besides Elder Scrolls’ Skyrim?

MH: Absolutely! I prefer the Fallout series to the Elder Scrolls, but the theme of the series isn’t very ‘Power Metal’ so it was easier to write a song about Skyrim. I also love the atmosphere of the Castlevania games (even though I’ve yet to finish one). I’ve got a song on my solo album called “Dracula X” about that!

MH: I’ve played the absolute living crap out of a game called Hunt: Showdown. It’s all I’m playing these days since I finished Persona 5.

MH: I wouldn’t say I’m proud of any gaming achievements as they don’t feel like real achievements ha-ha. My friend and I did beat ‘Ruby weapon’ from FF7 with only counterattacks though. Looking back, that was a completely unnecessary flex that I’m still bizarrely proud of.

MMORPG: After seeing the band live last spring on tour for my first time it’s apparent by seeing your stage show that perhaps all or most of the members of DragonForce share a love of gaming. Obviously, guitarists Sam Totman and Herman Li, and yourself. What about bassist Alicia Vigil and drummer Gee Anzalone?

MH: Gee plays a bit of PUBG (PlayerUnknown's Battlegrounds) online on his Twitch channel, and I’m not sure about Alicia, though we did play a bit of Warcraft together not long ago. 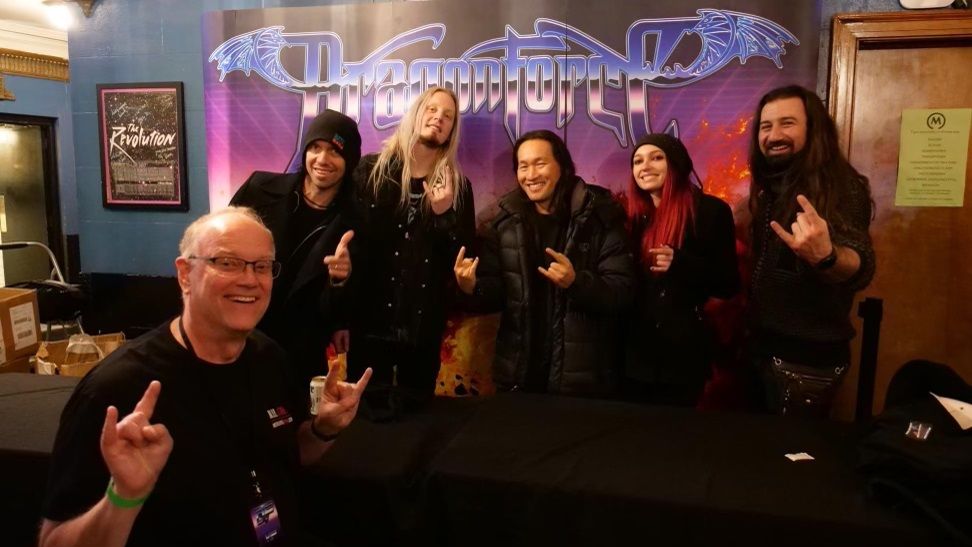 MMORPG: Based on your stage set DragonForce seems to be big fans of retro games and retro gaming. Is this true or is it merely that this is the most identifiable setting (arcade machines, 8-bit videos, etc.) for a live setting?

MH: It’s a bit of both, we love retro games, but it’s also because Sam is literally stuck in the 80’s and it spills out onto everything he does.

MMORPG: Did this shared love of video gaming help in some way with you getting into the band back in 2011?

MH: Not really. I think it was just one of those things that we later found out we had in common!

MMORPG: Obviously this shared love of gaming must create a special bond between you all?

MH: I wouldn’t say so. Sam and I had a bit of a rivalry going on over who could get the highest score on the original Donkey Kong for a while, but apart from that we just play our own stuff and don’t really talk about it ha-ha.

MMORPG: Is someone in the band considered to be the “Gaming Guru/Expert”? Meaning the person who likes watching current gaming news/reviews, buying the latest games for the band, etc.

MH: That would be me. Herman would say it’s him, but it’s not. It’s definitely me ha-ha.

MMORPG: On the latest DragonForce album (Extreme Power Metal) there’s a song entitled “The Last Dragonborn” that’s about Elder Scrolls’ Skyrim. Guitarist Sam Totman wrote the lyrics. Given the topic did you have any hand in it?

MH: Yes, I did. Sam pretty much wrote the lyrics not having played the game, so he ran the lyrics past me to help make them make sense.

MMORPG: Will there be any follow-up to “The Last Dragonborn”, e.g., an “Elden Ring” inspired song, i.e., something that feels like a spiritual successor?

MH: I don’t know, but it’s definitely possible. People seem to like that song and we have no problem with the idea of doing more video game-inspired songs.

MMORPG: You’re working on a solo album entitled “Starbound Stories”. Its Anime inspired but crosses some into gaming seeing as you already have a track inspired by Castlevania. Is this your first solo album? Have you done much writing of music and lyrics prior to this?

MH: Yes, it’s my first solo album! I’ve done plenty of lyric writing for DragonForce and most of the song writing in bands I was in before that.

MMORPG: Are the guest musicians on your solo album also gamers or anime lovers?

MH: Funnily enough, not really! The keys player, Shaz D, plays games, and so does Fred. I don’t think anyone involved in the project really watches anime, but we all love catchy anime music!

MMORPG: Any other video game-inspired tracks planned for your solo album that you can hint at?

MH: I had a song about the Xbox 360 game Lost Odyssey, but I binned that song off because it wasn’t as catchy as the rest, so… No basically ha-ha!

MMORPG: I guess it’s safe to say you also like the art of anime. What are your favorite anime titles, books, or shows? Which ones inspired material on the solo album?

MH: To be perfectly honest, I love the art of anime and manga, I love the music and the atmosphere, but I can’t confess to watching much anime. I’ve watched all the studio Ghibli movies, a bit of Cowboy Bebop, all the Dragonball series and played a bunch of JRPGs. I haven’t seen much in the way of recent anime though.

MMORPG: Who drew the anime artwork you’ve shown, presumably for the album cover, as well as the art featured in the teaser of you, I assume, wielding a blade?

MH: The album artwork was made by Shilin Huang who has her own webcomic series. The artwork for the teaser trailer was from a fan of ours who makes amazing fan art. Shout out to Anomaly Broccoli for that!

MMORPG: Do you feel that being a gamer has made you a better musician or are they completely unrelated?

MH: Not really. If anything, it’s probably made me a bit worse. I’d be a better singer and guitar player if I didn’t play so much Hunt these days.

MMORPG: What’s left on your gaming “bucket list” whether it's achievements, games I want to play, etc.?

MH: I need to play Elden Ring and Cyberpunk. Apart from that, I’d love to finish Yakuza: Like a Dragon. Oh, and I’m looking forward to Hollowknight Silksong!

MMORPG: Marc, thanks for taking the time to talk to us, especially while you’re busy on tour. Any closing remarks for your fans?

MH: Thanks a lot! The only thing I should mention is to continue to check my social media pages for updates on ‘Starbound Stories’! To quote every band, ever: ‘BIG NEWS COMING SOON’