This August, Hearthstone will be releasing its newest expansion, Murder at Castle Nathria, and we couldn’t have been more excited to have been a part of a group interview with Lead Designer Liv Breeden, and Game Designer Cora Georgiou.

Chock full of puns and gothic whimsy, Murder at Castle Nathria has us diving back into the Shadowlands to solve a murder mystery with the persistent Murloc Holmes and his ever-faithful companion Watfin. While the Shadowlands expansion has received a mixed reception across the playerbase, this new card set is bursting at the seams with potential and dripping with flavorful features that are sure to keep players entertained well past its sell-by date (August 2nd!).

At first, it seems a little silly to think about the concept. How do the Shadowlands and a murder mystery fit together? Where did this idea come from? And to be honest, after hearing from Cora and Liv, I wondered why they didn’t click together in my brain from the start. It’s perfect!

“The inspiration was definitely murder mysteries and pop culture, and then the classic tropes of murder mystery dinner parties, and how funny and silly and really interesting they can be. I really love them. It was something that I have wanted to do in Hearthstone for a long time. I think [murder mysteries] lend themselves to Hearthstone really well. I love subverting expectations of such dark material as a murder mystery, but you know, taking it and making it something that's actually quite light and quite silly… During one brainstorm session, somebody said, “Oh, you know, the Venthyr in Revendreth, actually throw parties as part of the class that your character goes on.” It's just a big part of the covenant. So I did some research, and I mean, the only thing that can make a murder mystery dinner party better is Gothic setting, and vampire characters. It really was just sort of a perfect marriage of all of these different wonderful tropes, and it felt like a perfect fit.”

“I also think coming out of the last year where we're like, “Hey, let's focus on what is core Warcraft.” This year has been so refreshing so far, where it's like, we're going underwater, and we're gonna visit this like sunken city and these gigantic minions and now we're heading into a space where we can be really creative with our ideas. We're seeing a lot of a lot of card names and card themes that we have never really been able to do before, because it's just such a unique space where the exploration is really creatively fulfilling.”

Hearing that the Hearthstone developers are finally getting a chance to stretch their creative wings is incredible; especially since while still successful, this past year has been extremely rough on the team. This has resulted in the team dedicating most of their resources to the expansion card set and new mechanics and features, while opting not to include solo content. It was a hard decision, but certainly a necessary one. 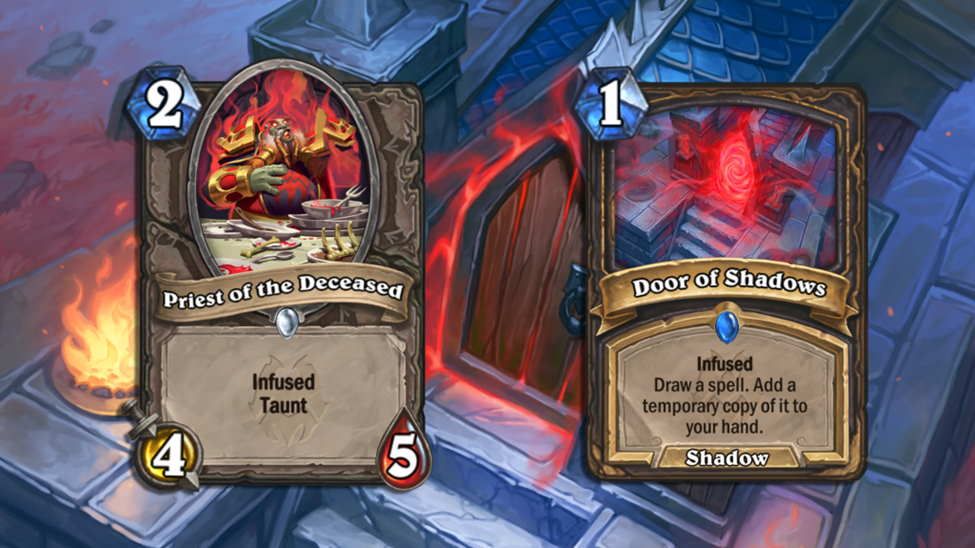 "It's really unfortunate because this is one of the sets that I would really love to do [solo content] in. But the truth of the matter is, our solo content designers were on a really unhealthy schedule, and it was leading to a really bad work environment for them because the last year was the book of mercenaries and it's so much content… But, that also means that they were running up against deadlines, and they were doing overtime, and that's not the thing that we want to do. So, we are taking a set off for single-player content. But, in its place, we wanted to find something that was appropriate to help build out that story a little more, because (like cards do) they're great at building vibe for an expansion, but they’re missing like a lot of connective tissue. So we did the solo screenplay script thing, to help build out those characters and to help players learn more about what the story is going to be. So we're trying other things outside of gameplay that can build out that story-and, you know, learn a little more about the murder mystery that way.”

Two of the features leading the charge for this expansion are the Infusion Keyword as well as the Locations card type. It’s not every day that we get to experience new additions of this magnitude, because of how much work goes into their creation and how they can potentially completely change gameplay. Cards that have the new Infuse keyword will transfer into a more powerful version once the specified number of friendly minions have died (as long as the card is in your hand). It’s a really cool idea that goes hand in hand with the themes of the Shadowlands, and consuming and reusing anima. The team played around with red mana crystals as an idea for a long time, but instead opted for the new keyword. 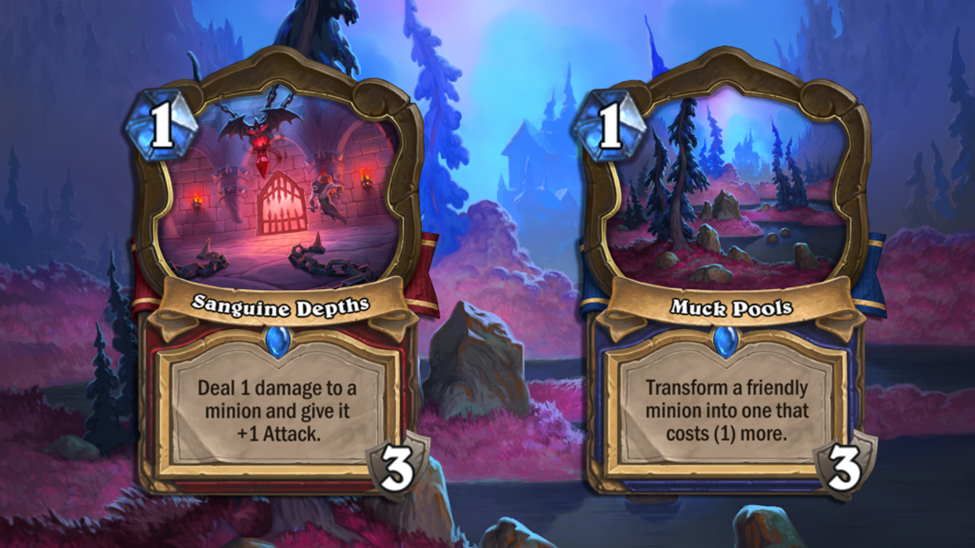 “It's funny that we keep returning to red mana crystals. And we're like, this is so coo! We can turn the crystals red, and then the gameplay that comes out of it-it's not really fun. It's like “Oh, it's like playing with blue mana crystals, but the visuals are cool.” So, it's something that we kept, we hung on to for a really long time, because the concept of getting red mana, and turning your mana crystals into anima crystals was really cool. But…there wasn't a whole lot of gameplay there to justify adding a new resource or changing your mana crystals and the complexity that goes along with that. So I think infused gives us a lot more gameplay there where it's the decisions you make, the cards you put in your deck-they really drive better gameplay. And you know, ultimately, that's where our iteration leads.”

Locations are especially intriguing because it’s such a unique addition to our current roster of cards types. “Location cards are played for an initial cost, and then activated for free on your turn to give you powerful buffs and abilities. Each location can be activated at the cost of a Durability and has a Cooldown of one turn between activations. Locations take up a slot on your board, but enemies can’t interact with your locations except with cards that specifically affect locations” (MaCN Announcement).

This is the kind of thing that “only gets added every 4-5 years”, Liv confirms, and had a lot of love and thought poured into it to make it a reality. One thing we’re really interested in keeping an eye on, is if these keyword and card types will continue into further card sets and that really seems to be up to the community’s reception.

“We're sort of always on the look for if a keyword resonates with our players, the gameplay is really good, and it's something that we, as designers find ourselves wanting to revisit. We're always open to making keywords “evergreen,” which is sort of how we refer to keywords that we use continuously things like discover, or battlecry, or deathrattle. So there's always that opportunity if we want to. I don't know that we'll do that within views, it seems quite specific to the setting. But with locations-absolutely. We're going to be bringing those back, we have some fun ideas going forward. But it was really important to us that we sort of established the baseline for locations within this set. It's a brand new card type. There's a lot of rules very specific to locations, and we want to give players the opportunity to learn those rules and to establish those rules before we then eventually break those rules and make locations that do crazy things that players don't expect. So it was really important for us to establish that baseline with locations that are simple enough, yet still very exciting and pretty flashy before we (in the future) decide how do we want to grow with them.”

MMORPG.com: “With so many new, punny, and creative cards, give us your top three favorites!” 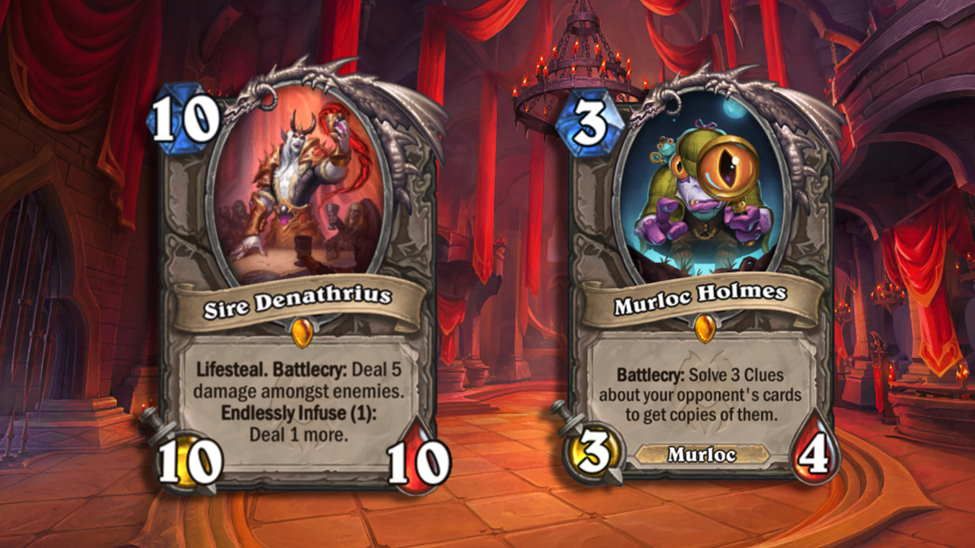 “I like that question! Okay, so I love the Harvester of Envy, which we revealed yesterday, I believe. I think it's super contentious. I think a lot of players are going to love it. A lot of players are going to hate it, and I think it's really unique, which I like it for that reason. I love the as of now yet unrevealed Paladin legendary. That one is super fun, and it's a really cool character. So keep an eye out for that whenever we reveal it! Not sure when it'll be but it's really fun. And third favorite card. Mmm hmm. Probably like Merloc Holmes or Sire Denathrius. I think it's hard for me because I'm so close to so many cards in this set. I've sort of had my hands on everything and I'm like, already like very attached to everything. But I think Murloc Homes and Sire Denathrius being sort of the two figureheads of the set. You gotta love them.” 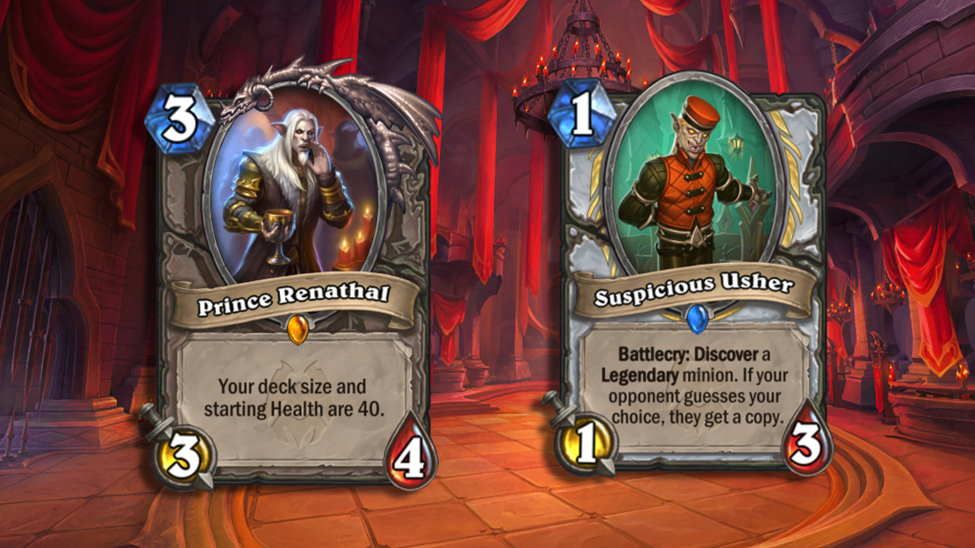 “For me, I think a lot of minor cards I've tried to slip into previous expansions and always get cut for some reason. But Renathal-I think this is probably the best version of him too. I joke that I tried to slip in the 40 card, every expansion, but this is like we found a good solution where it's like, not just downside actually feels like upside, because running more cards in your deck in a deck building game is, you know, less advantageous because your drives are less consistent. But people just like having more cards in their deck. Running a 40 card Reno deck is just silly to me. So being able to make that work-I'm really happy that that's made it in. The Suspicious cycle is another one. I think it's just a fun mind game to play with your opponent. It's better with friends, I'll say that, or people that you've played with multiple times. So (Hearthstone eSports come on!), but the idea of psyching out your opponent or like making them think that you're not going to pick the best card or whatever it is that I think that one's that’s up there.

For my favorite final one… There's so many good ones. I think the Kel'Thuzad package (but we can put it under Kel'Thuzad) is really exciting. Skeleton Mage is just super weird. It was something where we kind of want to try frost but we don't want to go do like “freeze a bunch of minions.” We tried that, actually, that was the first iteration. It's like, “We got Kel'Thuzad, we're gonna freeze a bunch of stuff, we're going to frost mage!” And then feedback internally was like, “Please don't…We don't want to freeze more things. We want to play the game”...So it's cool to like, get that frost flavor without being all about freezing. So yeah, I'm excited to see…how that plays out.”

“I will also say my favorite flavor text of the set is a not yet revealed Shaman spell. It's really fun.”Thanks again to Liv Breeden and Cora Georgiou for taking the time out of their day to get together with us for an interview! Murder at Castle Nathria is shaping up to be a deliciously fun addition to the Hearthstone lineup, and we can’t wait to see what happens when the playerbase gets a hold of the new set.