Fate of Gundabad, the latest expansion from The Lord of the Rings Online, has been out for almost a month now, and we wanted to know a bit more about its creation. We chatted with Executive Producer Rob Ciccolini at Standing Stone Games about the Dwarvish-themed expansion to the MMO.

MMORPG.com: The Legendary Item revamp had what felt like a rocky start.  How has the feedback been since it’s been out in the wild for a bit now, and how do you envision the system evolving with time to ensure that a full revamp won’t be required again, at least any time soon?

Rob Ciccolini, Executive Producer: We debuted a massive Legendary Items system update with Update 30.3 a few weeks ago, and it is rolling out new features both in Update 31 and beyond. In particular, we have a Legendary Item reward track coming soon, and we are working on some refinements for the future. We have heard from players who appreciate that the new system is easier to get into and use, and many players also appreciate the increase in power. We are looking forward to seeing this system continue its development in the future. A few things we have been hearing from you about is a desire to smooth out bumps in the user interface and initial learning process, so we will be looking into that.

One of the key design goals when we approached updating the Legendary Items system was to build a foundation that can be adjusted for years to come, and the new Legendary Item system has done that. The system itself has more ways for developers to make balance changes and improvements, so we can adjust to the current game environment more quickly. The system itself is built with the idea of not needing to do this kind of overhaul again.

MMORPG.com: Gundabad – can you talk about the inspirations to bring the Dwarves back to the Mountain- home? Do you think the fate of the Iron Garrison played into wanting to give the Dwarves another shot at reclaiming a lost ancestral home?

RC: I actually asked one of the story writers to help answer this one, as Jeff Libby was directly involved in the inspirations for the story of Fate of Gundabad. He tells me that most of the successes the Iron Garrison made in Khazad-dûm during the Mines of Moria expansion were fleeting, and the books themselves state that the dwarves don’t resettle Khazad-dûm until the Fourth Age, when Durin the VII leads them to victory. But we approached Gundabad with the idea of what if that defeat fueled another expedition and provided the drive needed to lay the foundation for the final retaking of Moria in the Fourth Age? What better and more meaningful achievement could there be for the dwarves and for Durin, son of Thorin Stonehelm, than the successful recovery of the Mountain-home? If it works, of course. If they fail, well... let’s hope they don’t fail! They’ll need heroes to help them, I suppose.

MMORPG.com: How has it been to create this journey for the Dwarves the last few years? How does writing for the Dwarves differ from creating stories that center on the Elves or Men, or even Hobbits?

RC: We have seen quite a few dwarves lately, it’s true! Much of the Epic Volume IV book took place in Gondor and focused on the world of Men so we wanted to shift the spotlight with the Black Book of Mordor and the regions through which it traveled, especially the Lonely Mountain, Iron Hills, and Grey Mountains, all of which have pretty dwarf-specific stories. We have made an effort to show that dwarves like every folk have a wide array of concerns and personalities. The story writers tell me that their writing is informed by the setting but that writing for dwarves and elves, for example, is very similar since the focus is often on what matters to the people, what they hold dear, and how they feel about the situation they find themselves in.

MMORPG.com: What is the story behind these Crystal Wargs and the blight that has corrupted Gundabad?

RC: Corrupted crystals were first found outside the gates of Gundabad, scattered among the enemies in Elderslade. An Angmarin sorceress named Brágha Fellwinder has discovered a way to boost the strength and ferocity of the already-monstrous Wargs. The power of these crystals has also had a side effect of driving Wargs and Men mad, and there is even further depravity and horror in the Clovengap. You as the player are helping someone investigate the power of the crystals, find the source of the corruption, and put a stop to it before this madness overwhelms the world.

MMORPG.com: One of the most interesting dynamics that I’ve found since starting the quest chain leading into Gundabad is the strife between the Longbeards, the Stout-Axes, and the Zhelruka. How important has it been to show that while the Good races can be against evil in the world (a la Sauron and his followers), it doesn’t necessarily mean it’s a harmonious alliance? It’s such an interesting dynamic and not really one that is leaned into with the movies, which dominate most of the mind share with your casual fans.

RC: Even though we are based in fantasy Middle-earth’s story often involves the question of what happens when the world-ending terror is finally defeated. The world is saved, but harmony is not guaranteed, and the sudden absence of a formerly unifying force causes ripples. We find the tensions between the dwarf-clans to be more realistic, and fertile ground for storytelling.

MMORPG.com: With the level cap inching ever higher, do you think a level squish might be in the works here soon? Or do you simply envision the level number continuing the rise?

RC: We do not currently have plans for a level squish as you describe it. Doing something like that would probably be the equivalent of a major release cycle, so if we did choose to pursue something like that, it would involve re-engineering a new level scaling system, adjusting actual content and gearing, and other things.

MMORPG.com: While we think of Minas Tirith or Caras Galadhon as marvels in LotRO, I’ve always been in awe with how the Dwarvish structures look, especially the work the team did in Moria proper. What’s it been like to go back and create even more zones with Dwarves in mind – as well as showing a region that was once a shining jewel of Dwarvish society now run down and decayed thanks to the evil that now holds it?

RC: One of the most exciting things about working on Gundabad was that we were able to take the blueprint we set back in the day with Moria in terms of a vast underground city and then modernize it by applying our new methods and sensibilities to the space. Each section gets to shine as a distinct region; Mattugard is quite pristine but other segments have fallen into disrepair, and places like Deepscrave have been overrun by orcs. Clovengap represents nature run wild, and the Pits of Stonejaws have the enemy moving in and establishing their own fortresses. 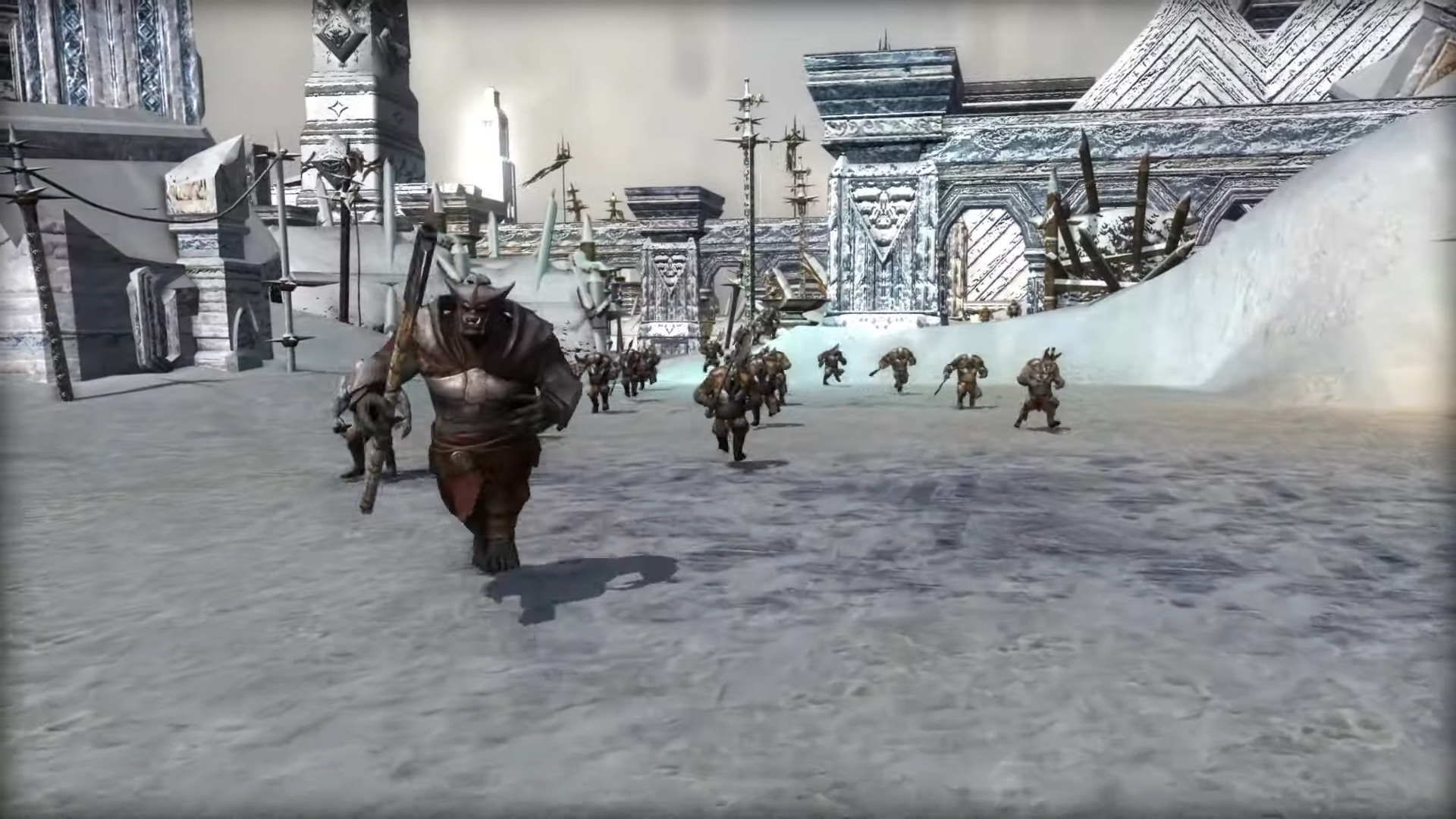 MMORPG.com: Brawler. You’ve talked at length about this and now players have had the chance to check it out for a few weeks now. How has the feedback been here, and do you expect there to be such a long delay between classes again (i.e. the gap between Beorning and Brawler being seven years now)?

RC: We try not to predict the future but we’d be surprised if it took this long between Brawler and the next class we release someday. We’ll be spending more time with the Brawler in the coming months fixing a few bugs and settling their DPS, for example. Feedback on the Brawler has been positive, and players seem to be enjoying taking their Brawlers through the game.

MMORPG.com: Can you talk a little bit about building the raid coming in Gundabad? A dragon? I mean, we’ve faced one before in Draigoch, so how do you top that?

RC: The upcoming raid centers on the intensifying conflict between the Dwarves of the Gabil'akkâ and Hrímil Frost-heart for control of Mount Gundabad. Hrimil and Draigoch couldn’t be more different. Draigoch was a powerful dragon like Smaug, but he was largely content to sleep amongst his riches. Hrimil in terms of lore served in the armies of Morgoth in the First Age and managed to escape the Dark Lord’s ultimate downfall. She was captured by Karazgar and imprisoned during Sauron’s rise to power in the Third Age, but escaped after Sauron’s defeat and returned North to seek dominion over the lands lost to her, most notably Mount Gundabad, which she has claimed as her lair and sole domain.

When players first encountered her in the Anvil of Winterstith raid back in Update 23 they managed to eke out an unexpected and temporary victory, but she’s now wiser to the threat Prince Durin and his allies pose to her rule and she will not be holding anything back! We have a lot of surprises in the store for the raid.

MMORPG.com: How does Gundabad compare to Minas Morgul in terms of size and scope of its content?

RC: From a storytelling perspective, the Minas Morgul expansion arrived alongside four chapters of the Black Book of Mordor (and an Epilogue), but it was divided pretty cleanly in half between Mordor Besieged and Imlad Morgul; as a result, the main story felt like it was told in two smaller halves. Gundabad arrives alongside seven chapters of the Legacy of Durin and the Trials of the Dwarves, all of which take place in and around the Mountain-home, giving it a feel more akin to big expansions of yesteryear, like the Mines of Moria (which had six Epic Story chapters). Gundabad is very big, but most importantly it’s varied. It was really important to us to keep it from feeling too samey, both to Moria before it and from zone to zone in Gundabad itself.