EVE Online has felt as though it’s been in a holding pattern these past months since May’s Fanfest 2022. And in some way it has been, as the team preps for its first expansion in years to the sci-fi MMO.

However, as Uprising gets closer to release, CCP Games is ramping up the events in the MMO to lead into the expansion drop. Last month’s Empire Frontiers update was significant in starting that endeavor, as CCP Games introduced not just more narrative into the mix, but also did something they haven’t done in an age: release new ships.

The major update coming with Uprising has to be the revamps to Factional Warfare, and the most recent major content drop here in EVE Online reinforces this. It plays on the progress alliances and empires have made in factional warfare as the NPC empires start to make moves of their own.

As a result, players can set themselves up to get ahead of the eight-ball with their time in Factional Warfare today, as Empire Frontiers allows them to really leverage the ground they’ve already gained, according to CCP’s Community Developer, Dan “CCP Convict” Crone.

“[T]o tie in with the run-up to the Uprising expansion a few months ago, the faction warfare militia leadership contacted the players in the game who are members of their respective militias [and] set out a set of goals that they wanted them to take and hold in the game, but didn’t explain why.”

Crone goes on to explain that those players that heeded the call went out and took control of the systems in the various warzones, and now those players are able to leverage the advantage they took with the ground they’ve gained.

“Players have the opportunity to leverage the advantage of the ground that they’ve taken previously to help them get ahead in the technology race between the two sets of empires that are fighting in the war zone,” Crone elaborated. 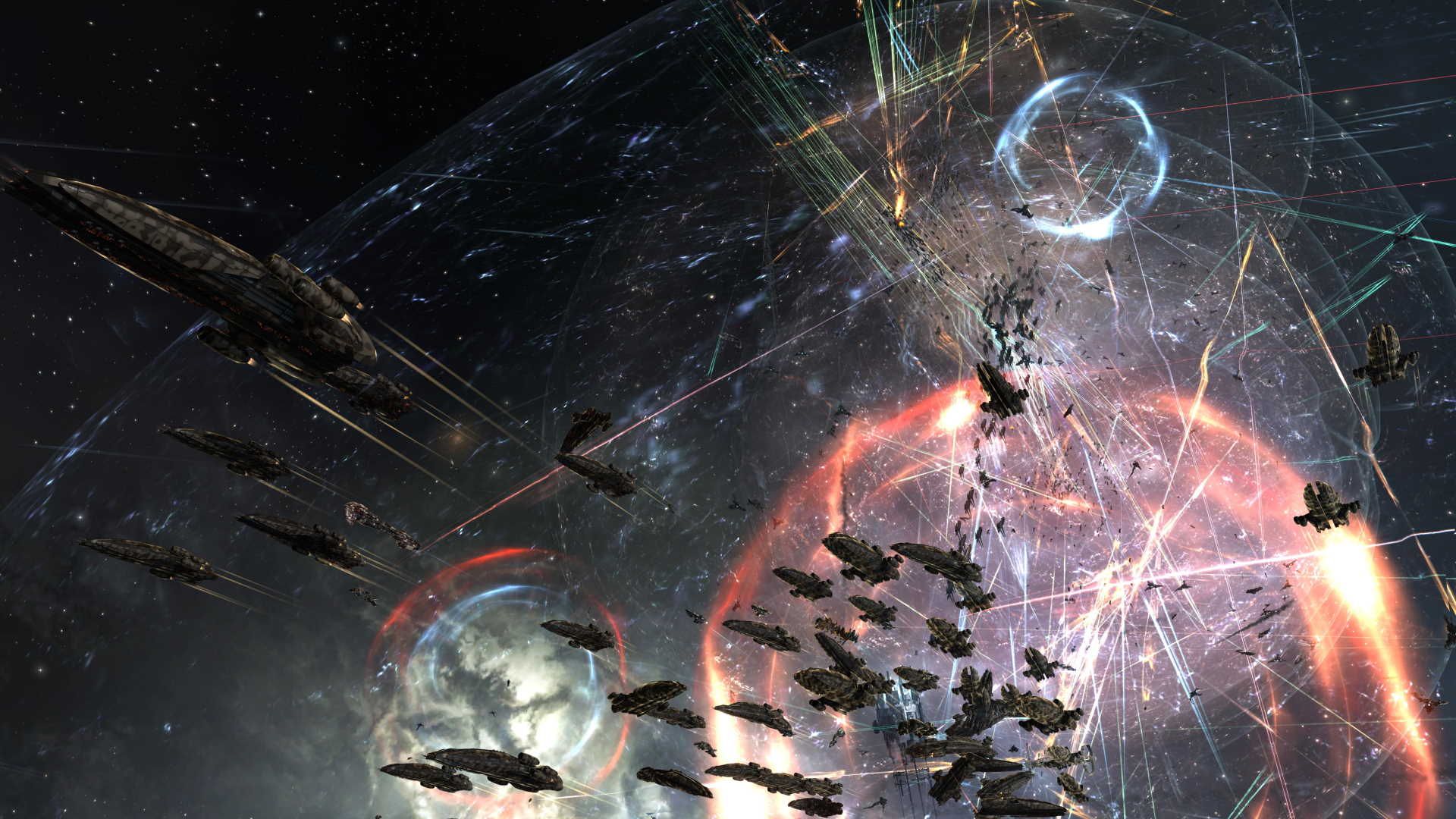 That technology race has been the underpinning of the narrative structure heading into Uprising, something EVE Online’s creative director Bergur Finnbogason has stressed will be more and more important over the years that I’ve been covering this MMO. Ever since the inception of the Triglavians into EVE Online with Abyssal Deadspace, through the Invasion, and into 2022, the narrative has felt at the forefront of everything the team has been doing.

For many players, the narrative arc here won’t matter as much as the story they themselves are creating in New Eden. After all, EVE Online thrives on the drama its players create, not the wars waged by the Gallente or the Amarr.

However, the community feels muted in their response to both the expansion and the current state of EVE Online. While the MMO has felt in this holding pattern as players have had to get used to not having rapid-fire content drops like Quadrants brought over the last few years, it feels as though the reaction to Fanfest’s announcements to now have cooled some with the community.

“That’s definitely a valid concern,” Burger tells us in our interview. But it’s something the team at CCP anticipated it seems, stating that they were “upfront” about this taking time.

“That is one of the things that I mentioned upfront that we’re moving from Quadrants to expansions and that just takes time. We have to untrain certain muscles, retrain some old muscles again.”

The team is keeping a close eye on community sentiment, however, gauging the reaction of those who are playing EVE and looking for more information and exciting things to do while in-game. But it’s easy to see even at a cursory glance how some players are, simply put, getting tired of waiting and moving to other titles while the ramp-up to Uprising continues. The easiest way to see this is in the streaming community, with many of its main game streamers branching out into other titles such as Albion Online or Star Citizen lately.

However, while CCP Games is obviously keeping a close eye on daily log-in numbers, it’s also expecting some ramp-up in excitement as Uprising releases.

‘We’re definitely keeping an extremely close eye on our daily active user numbers, our MAU numbers,” Bergur says in our interview. “We have frequent meetings with our community team where we go through sentiment, we dive really deep into what's going on with streamers and things like that. And that’s something we’re keeping an eye on, but it’s also important to not lose sight of the target. The expansion is coming out on November 8th and it’s going to be kick-ass. And that’s the goal. And it’s very easy to lose track and kind of start to focus on other stuff or react to the moment right now. We noticed that the community is in, you know, there’s a lot of players in somewhat of a holding pattern, waiting to see what will come out.”

Convict added to Bergur’s point about keeping an eye on streamers, effectively stating that this is the normal course of a streamer growing their career, and branching out to other titles.

“Sometimes people just sort of get into a rut where they plateau in their number of viewers, so they decide they will try out a different game to see how they go. If their ambition is to make themselves out as a streamer as opposed to merely being an EVE Online streamer their whole career, obviously they have to try other things if they want to hit the numbers if they want to be the next Ninja or something like that.”

Obviously big, established EVE Online streamers leaving the game is going to make the community raise an eyebrow, but to both Bergur and Dan’s point, it could simply be part of this overall holding pattern the MMO seems to find itself in. The need to branch out for an audience, or just check out another title while waiting could be taking hold in the community as they wait for the expansion and its anticipated Frontlines changes to Factional Warfare launch next month.

For a genre that really keeps a close eye on concurrent player and monthly player counts, EVE Online players really feel more keenly aware of this versus other MMORPGs. While we can all talk about New World’s drop in player count over the year, EVE Online players have been talking about MAUs for years now (it’s been an active concern ever since I started covering this in 2017). Why this might be is down to the fact that I alluded to earlier in this piece: player-generated storylines. The sandbox needs players to survive, and that excitement to log in and fly with your space friends is paramount to keeping player engaged.

However, what has brought some excitement back to players has been the inclusion of the new ships with the recent update. This is the first time the team has added new ships into the MMO since 2020 during the Invasion when Edencom ships were brought into New Eden. However, it’s not like players could just start manufacturing them the second they released. Part of the set up was to get into a position to earn the blueprints necessary to start manufacturing these ships, especially at the scale Nullsec empires would need to in order to shake up the meta in the next war.

Players are already starting to fly these ships in PvP just a few weeks after they launched, with the second Myrmidon Navy Issue ship ever created being lost in a PvP battle just a few days prior.

It’s also not accurate to say that just because the community has felt a bit muted in recent weeks that there hasn’t been any excitement, especially in Faction Warfare in recent weeks. Gallente Militia has been on the move, with Oicx recently being captured after a long siege. (Though, in perfect EVE fashion, the Gallente Militia’s progress is being disputed in the Reddit thread.)

It’ll be interesting to see how players react through the coming weeks as Uprising starts to inch ever closer to launch. One thing is certain, though, Uprising has seen a noticeable uptick in direct engagement with the community beyond the normal Twitter interactions or back and forth on the forums and Reddit. The community team has been taking more and more towards streams of their own to get out in front of the players and engage in a way that makes one remember a Fanfest panel to a degree. And this is something that, while it won’t happen all the time, is never going to go away.

The streams that have happened have been more opportunistic, according to Crone. More or less the team has a topic that would be compelling to show on stream, so they do so type of situation. Not every update is going to warrant that, or be compelling. So it’s a mater of choosing what fits.

“We will continue to do them, but not at a set cadence if you will. We’ll just look for the opportunities that come along, which lend themselves to that format and seem like an ideal topic to tackle.”

This coming week is the return of EVE Vegas, and while it used to be a major event on the CCP Games calendar, it’s been turned back into the grassroots community even that Vegas started as. However, don’t expect CCP to just count it out, however, as there will be a few devs in attendance to chat with the community and interact with players who are there to enjoy the bright lights and nightlife of the Las Vegas valley, all while plotting their next move in New Eden.

“We’ll be there,” Convict tells me. “And we’ll also be bringing something.”