Over the last month, we’ve been slowly dipping a toe into Amazon’s New World. The same hands busy polishing off the sands of Aeternum dropped new highlight reels allowing all of us to step beyond the beachhead of this upcoming MMORPG and glimpse an island full of new dangers and legends. Despite this information dump, we still don’t actually know a great deal about what makes Aeternum work. Whether it's Reekwater, Mourningdale, or the dank dungeons that lurk out in the wild, we took some time with Amazon’s Robert Chestney, Narrative Design Lead, and David Verfaillie, Creative Director at Amazon Game Studios, to chat about the magic behind New World.

MMORPG: Thanks for taking the time to answer some of our questions today. To get a better understanding of what sets Aeternum apart from some caldera atop the ocean, what makes Aeternum so magical?

Robert Chestney:  While a complete answer to this question may remain elusive for some time, some elements are readily apparent at the start of the game. The island is abundant in a substance known as Azoth, which is the reason why many on Aeternum return from the dead. Some return entirely as they were, except for maybe a slightly traumatic memory scar from the experience of dying, but it’s not a 100% reproducible phenomenon. Some return without their souls, their sense of purpose. They become “Lost.” Others come back Corrupted, possessed somehow with an insatiable evil. While there are some apparent factors in determining which fate befalls each person, it may be more complex than the current residents of Aeternum realize.

As players explore Aeternum, they’ll meet characters from countless cultures who’ve arrived on the island during different ages. While many have only vague recollections of how they arrived, or how long it’s been, this would suggest that the island might not have always been located in the Atlantic Ocean. If it does move, however, the mechanism and purpose of this functionality is also something that remains a mystery at the current time.

MMORPG: As a consumer, I’ve almost been conditioned to expect high fantasy that leans heavily on medieval empires and the High Middle Ages. Visually and thematically New World feels like it takes a lot more inspiration from the Late Middle Ages when mysticism, hexes, curses, and Witchcraft were taking root. Did this guide the design of Aeternum’s magic?

Robert Chestney: Yes, most definitely. Elements of folklore and superstition from the Age of Exploration were the primary influence. It was a time when early science was smashing through archaic wisdom and centuries of religious theory and indoctrination around the world. Cultures coming into conflict with vastly different worldviews and belief systems. Aeternum is where all these influences collide, and while the humans on the island can hardly afford to indulge conflicts among themselves, the specters of the worlds they left behind have followed them here and manifested as threats in a very real way. It’s worth pointing out that while it’s true that this is the entry point for players as they begin to unravel Aeternum’s mysteries, it goes much deeper as well. New World also has secrets and twists that are inspired by the peoples and mythologies of the world’s most ancient civilizations. 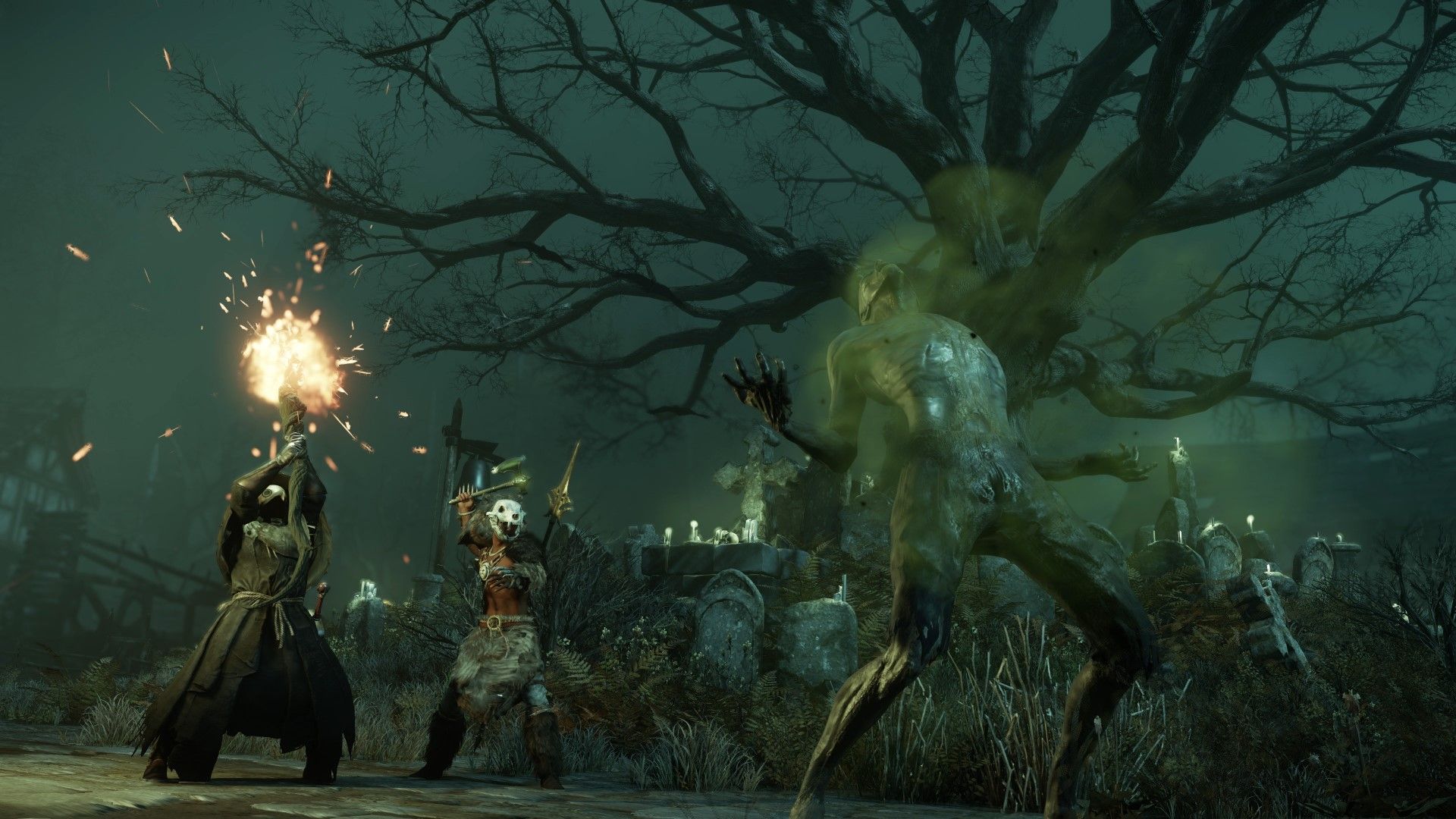 MMORPG: There appear to be many types of enemies out in Aeternum, the corrupted, the Soulless Lost, and even the Ancients. All of these look like they have their own magic. Is their magic all the same and how does that tie into the way magic manifests Aeternum?

Robert Chestney: While Azoth is the primary source of supernatural power on Aeternum, it’s part of a more diverse array of cosmic forces. Indeed, while it’s clearly the cause for resurrection, the presence of Corruption is proof that it’s not the sole source of power. From the Corrupted to the strange, botanical “Angry Earth,” to the use of weapons that can channel elemental magics, it seems that the laws of nature here have been and continue to be manipulated in ways that are to some extent beyond current human comprehension. The dynamics between these cosmic forces have evolved over time and are probably still evolving even as the game’s narrative unfolds through current events and those in post-launch content.

MMORPG: Similarly, we’ve seen distinct cultural influences on Aeternum like Ebonscale and Taiying. Do these play a role in the way different factions in Aeternum use magic and how it is represented?

Robert Chestney: Yes, the various civilizations and cultures of the world have brought their own understandings of life, time, death, magic, good and evil, and then seen those beliefs reflected back at them as they’ve interacted with the energies of the island. Some have simply learned how to channel these energies in the ways that they understood from the old world, and others have discovered entirely new twists to their beliefs or, through their interactions with the Corrupted, the Lost, or the Angry Earth, evolved entirely new beliefs and practices which they pursue overtly, or in some cases, in secret.

MMORPG: We’ve seen a lot of the Corrupted and their insidious influence. Can we expect all magic to present itself as a malign force in Aeternum?

Robert Chestney: Definitely not. There are beneficial magics on Aeternum and in fact, I might even go further to suggest that there are good and bad elements to all the different enemy groups and the cosmic powers they represent or channel. Some scholars might suggest there’s a balance between all these forces, and while it clearly isn’t self-maintained, over time, we’ll see different expressions of the Soulless Lost, the Angry Earth, and even the Corrupted that are more sympathetic. Players may even need to tap into these various powers themselves at some point in order to survive, and certainly to protect the human settlements in this unending frontier. 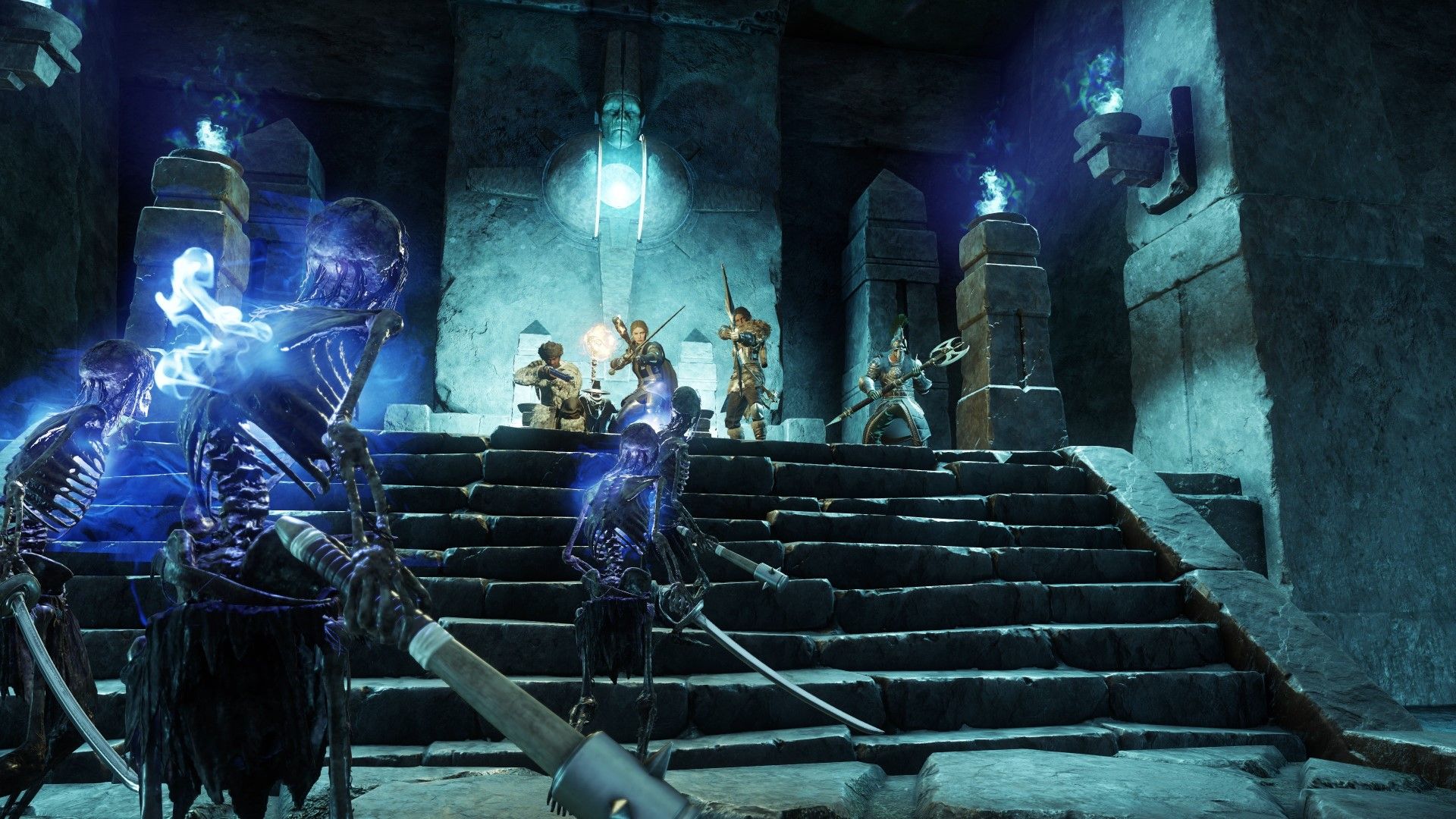 MMORPG: I noticed during some combat scenarios, certain skills have an audio queue and even runes connected to them. Are these significant in the wider lore?

Robert Chestney:  Our audio team is world-class and they’ve been developing some really awesome strategies for integrating with the lore for some time. In fact, as you seem to have noticed, some of the enemy families have entire languages that they’ve developed, which the players will hear in audio cues and read in lore notes. These languages are of course inhuman, but suffice to say, if someone devoted enough time to studying them, they very well might decrypt them and expose some of these groups’ secret histories and future plans.

MMORPG: With New World’s action combat system, we haven't seen a traditional skill bar swarming with magic spells, so how exactly does magic play into player combat in Aeternum and how do you access it?

David Verfaillie: Players will be able to access magic by equipping magic weapons that channel powerful elemental magic. At launch, we will have 3 magic weapons available. The life staff harnesses the power of nature to heal, restore and buff players. The fire staff harnesses the power of fire to burn, explode, and rain down fire. And our most recent addition, the ice gauntlet, harnesses the power of ice to freeze, create ice storms and encase its wielder in protective ice. One of the unique parts of the combat system in New World is that players can wield up to two weapons at once, so they can live out their fantasy of creating a hybrid fire/ice mage.

MMORPG: Having had an opportunity to step into an Expedition and experience New World’s combat, it doesn’t feel that magic is always a necessary option. If I chose to rely on steel and oak to get the job done, am I going to be at a disadvantage?

David Verfaillie: While going all steel and oak is possible, it will be at a disadvantage versus a balanced party of adventurers. Life magic, with its strong heals and protective abilities, gives players important sustainability during the more challenging boss fights and minimizes downtime between fights. Likewise, the Fire staff can provide strong DPS and help with some of the larger engagements with its large Area of Effect spells. And lastly, the Ice gauntlet can help provide some crowd control with its slows, while also pouring on some nice damage. A balanced group that combines a tank, healer, and a few DPS is generally the most efficient path in Expeditions.

MMORPG: In combat, magic tends to be a very passive power. Stand back and heal or DPS from a distance. How does New World stand apart from that, given that combat doesn’t tend to be a tab target sort of scenario?

David Verfaillie: The action combat system of New World makes using magic much more dynamic and skill-based than in tab-target games. Some abilities, such as Beacon on the life staff, are projectiles that shoot out from the staff. Beacon’s projectile is interesting because it can either hit an ally or the environment, so it can be used to either attach to an ally, healing them and all other allies nearby, or to shoot at a specific place so anyone who stands near the beacon will heal over time. Other abilities, like Meteor Shower on the fire staff, allow you to aim an AoE target on the ground until you’re at the exact spot you want and then unleash its power. 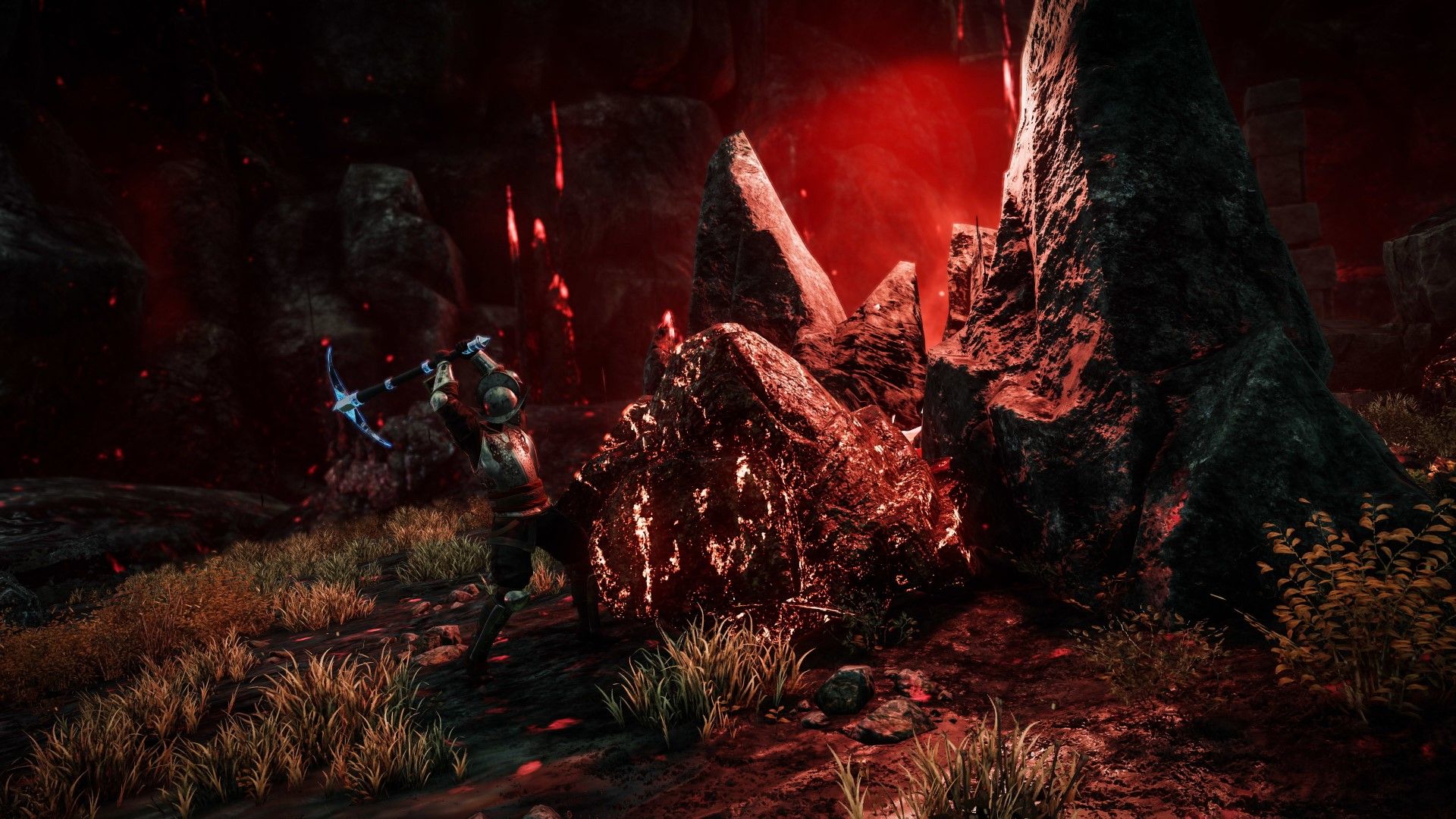 MMORPG: We know that magic has a direct influence on combat systems, but does it just stop there? We’re bending the power in Aeternum to our will and the island seems to be steeped in it. For example crafting?

David Verfaillie: Magic and the power of Azoth influence much more than combat in New World, and yes, that includes crafting. Players can enhance their chance of making powerful gear when crafting by adding Azoth to most recipes. The more Azoth that is added, the higher the likelihood of powerful perks, gem slots, or attribute bonuses. Players can also use Azoth to fast travel around the world of Aeternum. The farther a player travels or the more they are carrying at the time, the more Azoth it will require to teleport to their new location.

MMORPG: I can’t imagine that a single magical skill is maxed out as soon as it is available. How does magic fit into New World’s character progression?

David Verfaillie: The main way to progress magical power is through our Weapon Mastery system. In New World, as players use a weapon they get better with it. This manifests itself in weapon mastery points that players can spend to unlock new abilities and passive upgrades. So as a player uses their Ice gauntlet, they will earn Ice gauntlet XP and at certain thresholds be awarded a point they can use to improve the weapon. Every weapon type has two trees that offer different styles of combat, and players can mix and match or create their own specialization.

MMORPG: All I’m saying is, Dragons? Do we get epic magical wildlife or is Aeternum the preserve of the undead?

David Verfaillie: Dragons can be undead! In fact, as we’ve all seen from Game of Thrones, they can be even more dangerous as undead! Either way, they’re definitely not an impossibility here. But one thing you can count on is that Aeternum isn’t going to tread too much on fantasy clichés. We’re looking at folklore and mythologies from around the world for fresh inspiration. The game is, after all, called “New World.”

Magic in New World seems to weave its way through the very fabric of this upcoming experience. While our recent hands-on provided a fantastic example of how that unstable element can be utilized in combat, there's clearly much more to explore on Aeternum than just the Amrine Excavation. To find out a little more about the history behind New World, have a look at the recent Legends of New World trailer while we work on our own spell-slinging for the 20 July Beta Test.