Back at EVE Vegas 2019, CCP’s Bergur Finnbogason announced to EVE Online fans the introduction of Quadrant updates. These quarterly-ish updates would be complete with their own theme and bring dedicated improvements and updates to the sci-fi MMO regularly. In addition to these themed quadrant updates, a new development team at CCP Games had been put together, Team Talos, with the intent to create faster updates that could be deployed quickly to fans to iterate or react to something in EVE Online as feedback dictated.

Since then, through the last few years these updates have, more or less, hit the mark. From the first Quadrant since EVE Vegas, Fight or Flight to the most recent Gateway update, the cadence has allowed players – and the developers alike – to set into a rhythm. However, it’s been a bit since the last release, which came in September 2021 and players have been keen to know what’s next.

CCP Games is always looking to iterate, even when it comes to its release cadence. And with Fanfest returning – four years since it was last held in Reykjavik – it stands to reason the team behind EVE Online might be holding some of what’s to come for the event.

Quadrants have worked, by and large, and the community has understood how the structure has worked the last few years. Team Talos’ ability to be agile in how it deploys updates and iterations as well has been pivotal to adjusting and iterating in EVE since 2019. One constant in my calls with CCP over the last few years has been the ability for the dev team to iterate on a Monday and, if need be, adjust by Thursday. The speed at which ideas and updates can flow is, as brand manager Sæmundur Hermannsson put it in an interview last week, “unprecedented.” 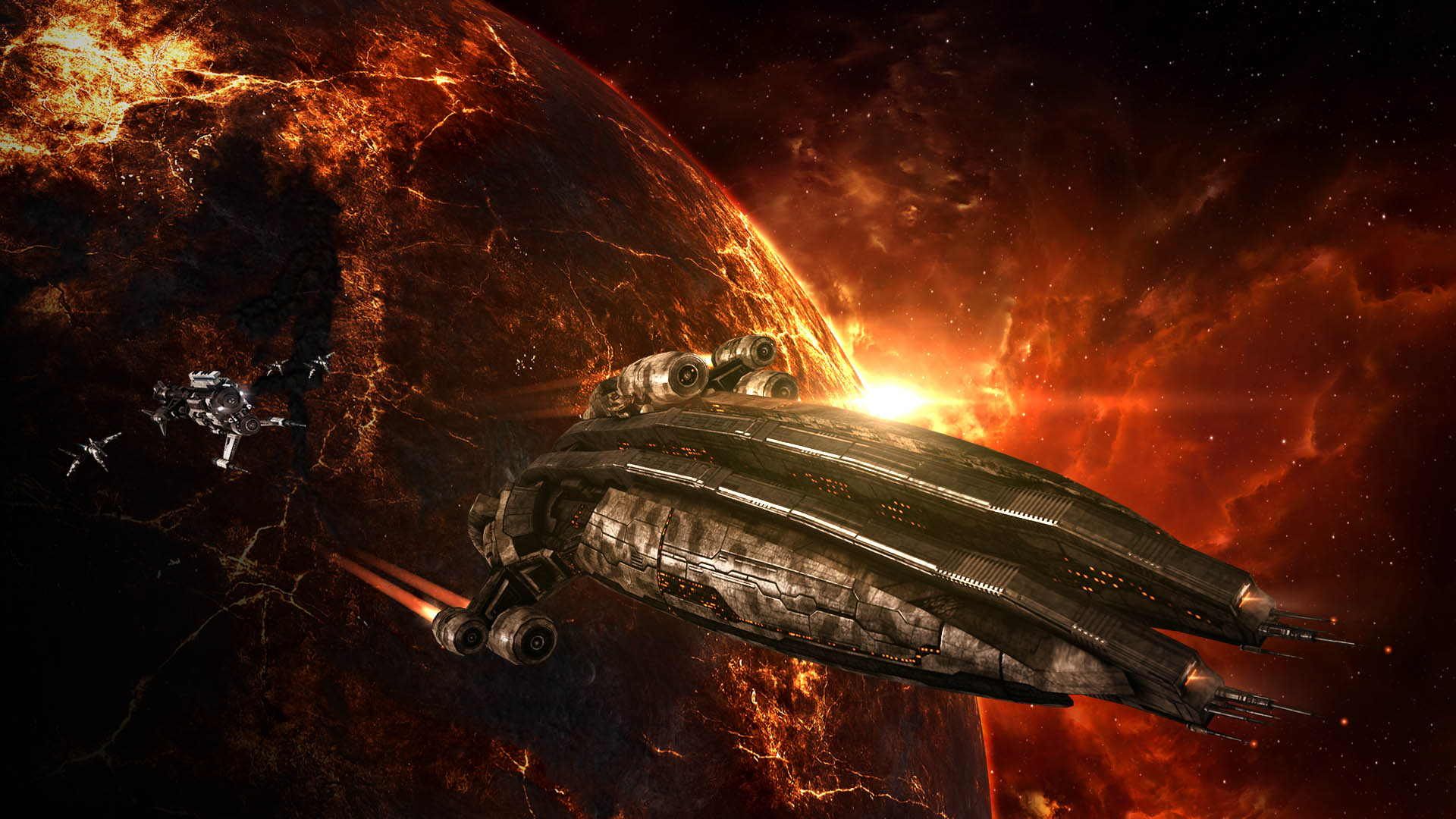 “Just the reception from the community understanding it, and us being able to deliver things, updates at that unprecedented scale that EVE Online has not seen before,” Hermannsson said about the reception to Quadrants. “I’ll just allow myself to say those are the events and balance changes, iterations and updates – everything. It’s been a lot of fun for us internally to have this holistic theme and feed into it.”

Each Quadrant had a theme that defined the release, from 2021’s Foundation which sought to reintroduce the in-game NPC empires that form the foundation for New Eden’s story, or 2020’s Phoenix which saw players rebuild New Eden after it was changed forever thanks to the outcome of the multi-year Triglavian arc. These themes, these event and more helped solidify and give context to the updates that CCP was pushing out, with smaller, iterative updates inbetween. However, this came at the expense of the massive expansions EVE did for years, and it also didn’t allow for the type of narrative growth that EVE Online has been leaning into with its recent additions.

“Now, after two years of having done it,” Saemi continued, “we have been going on a journey internally to see how we want to progress going forward.”

According to Hermannsson, this signals an evolution from Quadrants. And while the brand manager is quiet in terms of hard details of exactly what players can expect, he does tease that there is a focus on narrative and expanding the narrative that is the backbone of EVE Online’s universe.

“We want to put more emphasis on continuing to evolve the New Eden world, the lore behind it, and what is going on, having a narrative tie the whole thing together. And not just do balance changes and visual updates and event. Having [something] very concrete, something to put a bow on it and tie it all together.”

This is something that seemingly has been in the works since I started covering EVE Online in 2017, it feels. EVE Online has always felt “PvP-first, “ and everything else is a distant second. Story, which might surprise many that EVE has a story, always felt simply uncelebrated, as if it is there to help give the scaffolding for the players to use when building their narratives and social structures. However, as creative director Bergur Finnbogason put it, this idea of progressing the world is something “near and dear” to his heart.

A perfect example of this shift in focus can be seen with the currently ongoing Guardian’s Gala. While the event has been going on for years, the narrative underpinning of this year’s event serves a purpose more than just what players can blow up and recover for a reward: it sets the stage for what’s to come.

This year’s Gala still has players blowing up Angel Cartel and Serpentis pirates should you decide to engage them. However, the whole narrative is that these factions ambushed an ORE research facility, stealing away the scientists working on a new form of compression. This might sound familiar, as last year the proposed compression mechanic as part of EVE’s tumultuous exit from the Scarcity Era rubbed some capsuleers the wrong way. CCP went back to the drawing board, taking player feedback and vowing to revamp the upcoming proposed mechanic.

Should you save the scientists that are missing – a rare occurrence as not many of them will appear as loot from your Gala adventures – you’ll be rewarded with a billion ISK. You can also earn early access skill books to get started learning the ORE Compression technology that CCP has been building towards.

This idea of the events in EVE Online progressing the world is something Bergur touched on even before we started talking about the upcoming changes to release cadence in our interview.

“This is something that is very near and dear to my heart. I want the events to really start to progress the world more. I just want content in EVE should progress the world. The world is, and it has been , quite static throughout the years. And this is something that we kind of iteratively kind of pushed on and tried to push further with something like the Invasion and other content where player actions can really affect the world and affect the fabric of space.”

This doesn’t mean either that the Road to Fanfest as CCP is calling it will be devoid of updates, though. Hermannsson states that until Fanfest, which takes place in May this year, things are still going to be updated at a similar pace as before. For the last year or so CCP Games has been building on the foundation of EVE Online, from the Scarcity and Chaos Eras to now, trying to get things like the economy back in check as well as introduce risk back into EVE Online. This is something that can be built upon for the future, which Peter “CCP Swift” Farrell, a community developer at CCP Games, explained exactly what players can expect to see along this road to Fanfest.

“The patch coming in March is basically all cool stuff. It’s all stuff that players have wanted. It’s something we’re able to now build on what we have and deliver the fun like really, really hot features like in-space compression. Which is something we kind of wanted to put out last December, we took it back because it wasn’t exactly how we’d liked it. And the players were like, ‘we want compression, but we don’t want it like this.’ So we took it back to the drawing board, made a few improvements based on their feedback, and just basically gave them, or will be giving them exactly what they wanted. “

Now with the upcoming changes, players who want to do compression can compress gas, as well as be able to compress up to 215 kilometers away from large industrial mining ships, giving players more options for their industry supply lines.

CCP Swift also touched on changes coming to Battleships, which is always a hot hull class of ship to fly in EVE Online. Personally, I’m pretty excited for this as my favorite ship in the game is the Machariel, a battleship which I’ve had to buy quite a few times thanks to losing it in firefights.

Battleships are, as Swift put it, going be seeing the team “buffing the crap out of them.” More hit points,  adding more resistances, MGDs will be easier to fit, giving these Battleships even more maneuverability on the battlefield – the team is looking to really shake up the meta and see how players will react.

Also on the road to Fanfest is a new addition to the new player experience: mining. While the NPE currently teaches players about basic combat, fitting a ship and the lessons death in New Eden can teach, it doesn’t necessarily lean into the career paths players can take. CCP Games is adding the first of those paths in mining to the experience in an effort to help new players understand this pivotal activity easier.

It'll be interesting to see how CCP frames the coming months, as well as how they plan to follow up the largely successful Quadrant formula. Fanfest, which is anticipated by not just the fans who will be festing at the festival, but also the developers who have been looking forward to this since the EVE World Tour ended in 2019, is just a few months away. How EVE plans to kick up the narrative to make it more central to players, especially new ones, is going to be interesting, especially as the team still has the task of balancing an open-world sandbox that represents to type of player freedom games have tried to emulate for over a decade. It’s a balancing act for sure, and it’s going to be fun watching the team try to keep their balance in the coming months.