2022 is already off to an interesting year in EVE Online, with the holdover from the scarcity to prosperity discussion from late 2021 still casting a pall over many capsuleers. Since then EVE has seen NFTs hit the MMO's Alliance Tournamnet, though not in the MMO itself, as well as the first major cross-over IP in EVE's almost twenty year history. Yet as 2022 starts to deepen one question looms on my mind specifically: Fanfest.

It's been a few years since the last proper EVE Fanfest, with developer CCP Games opting for a world tour in 2019. The the pandemic happened a year later and the annual trek to Reykjavik for many a capsuleer was put on hold. It's now set to resume this May, though the current resurgence of cases has many wondering whether Fanfest will be on hold once again.

"We are closely monitoring the situation," CCP Game's Saemundur Hermannsson stated in an interview with MMORPG.com last week. As the studio will have to look at a myriad of factors to determine whether it's viable to move forward, from transmission rates of new variants to guidelines handed down by the Icelandic government, the studio is monitoring the current surge in positive cases from all angles.

Fanfest is a time like no other for many EVE players. It's a chance to meet up in person with your corpmates, plan large movements and goals for the year, and just have a good time with fellow capsuleers in one of the most interesting destinations in the world. While Fanfest 2022 as of this writing is still a go, it'll be interesting to see how it proceeds as we get closer to May. 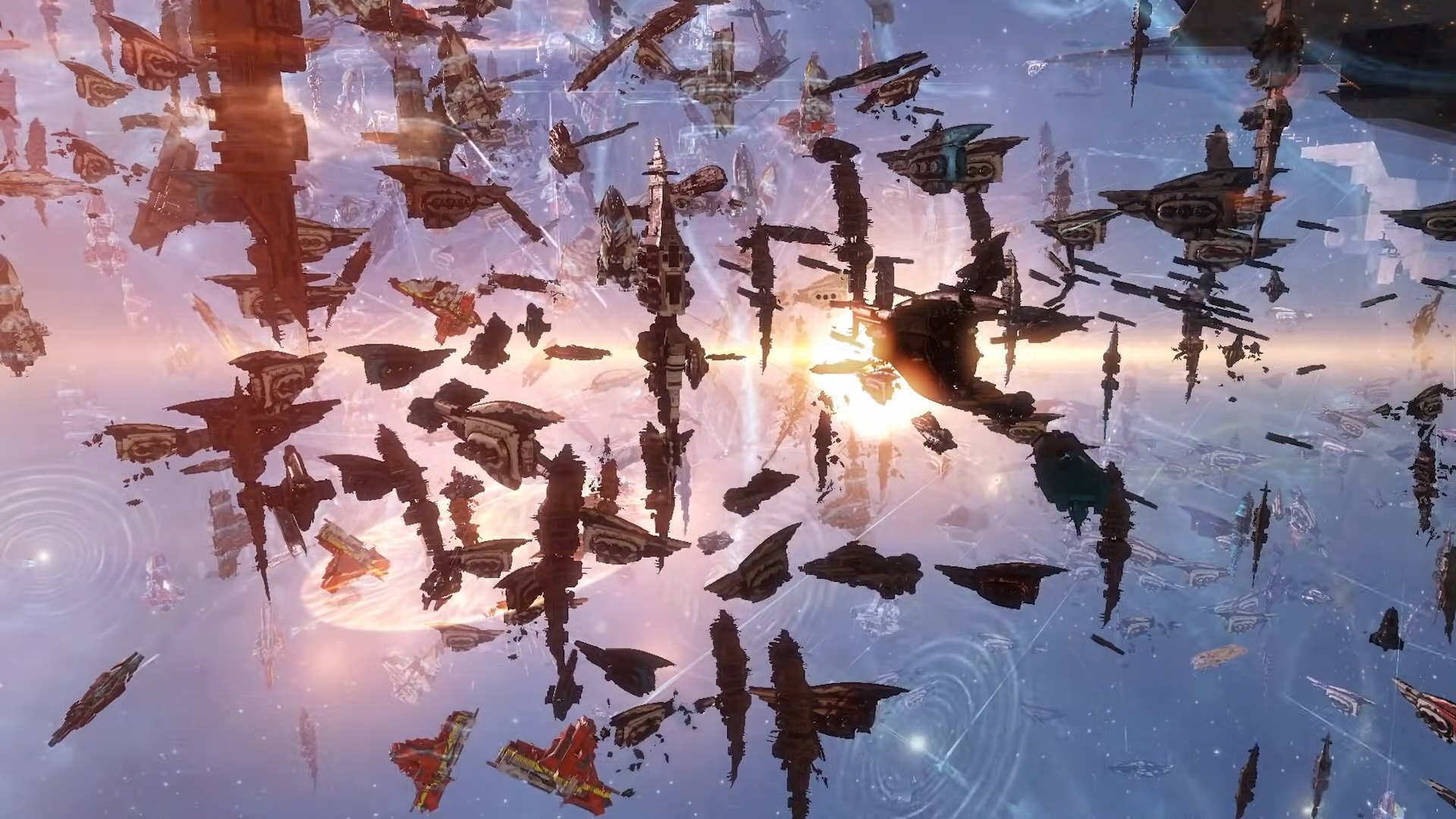 Another major topic that has dominated not just EVE discourse, but gaming in general, is that of blockhain and, more specifically, NFTs. While many MMOs are dabbling in NFTs themselves, EVE did the same by introducing NFT killmails as part of last year's Alliance Tournament. While the NFTs themselves aren't in the actual MMO, meaning that you can't earn NFTs for kills in your everyday gameplay like participants could during the tournament, CCP Games isn't shying away from the technology. Blockchain is something we've heard CCP talk about before, and it doesn't seem like that interest in learning more about the technology is going away any time soon.

"When you dig into the blockchain an dhow blockchain is created, there are incredible similarities to how EVE Online is built," Creative Director Bergur Finnbogason said when asked if these NFT experiments will continue, or if they are one-off fascinations of the studio. "I'm not saying that this happened because we were Uber masters, maybe by chance or maybe it is the most logical way of building and storing massive amounts of information. The amount of transactions that happen in EVE Online every day, and I'm talking server transactions that happen in EVE Online every day, it's way beyond what any cryptocurrency is doing right now.  It's like it's way, way, way, way beyond. So we're, in an odd way, almost too big for the blockchain right as it is right now."

How blockchain is being implemented in the games world is something of a contentious topic. The technology itself is still being iterated on and evolving, something which both Saemundur and Bergur bring up when talking about the tech. However, Bergur states that as they stand right now,  the blockchain world "is not necessarily at a place where it makes perfect sense for games to adopt."

"I think there [are] a lot of interesting things in this blockchain world we can learn from and we can take learning from to push foward. I think, [from] my personal view, I think blockchain is not necessarily at a place where it makes perfect sense for games to adopt it. I think it still has a little bit more to go, but [thankfully] for most things move extremely fast in this world. "

"There [are] a lot of really cool things going on in the Web 3 space," Saemi added as well. "And a lot not so good. It's in the middle of a crazy innovation cycle. "

One thing CCP Games has held firm on is this idea of EVE Forever, this notion that what they are building in EVE Online will outlive us all. Looking at technologies like blockchain only further that goal according, though Bergur is quick to note that just because the team is looking at these technologies doesn't necessarily mean its their future, per se.

"I think the dilemma we're seeing with NFTs for instance is there is a very interesting answer in gaming. Because the value of an NFT is in the eye of the beholder, like most art. But there is little tangible with it, there are so [few] emotions attached to it. But games, they have this element of emotion and emotion towards a digital item. [G]ames hold the answer that blockchain is looking for in NFTs right now. And now I'm not saying that we're going like hardcore into this world. I'm absolutely not saying that. I'm more saying that there is some interesting conversation here and I have not seen a correct solution in this space. And I don't think anyone has found a solution yet. But slowly people are chipping away towards a place where the solution is. So there's a future there. I don't konw if it's our future or someone else's future. But it's out there and I'm extremely intereested in what it will be."

Saemi added to this stating that the vision he has is of EVE Forever. And while the discussion around NFTs usually turned into a fear that implementing them will mean a cash grab for companies,  Saemi stresses that's not the direction EVE will go - as it doesn't further that Forever charge.

"The vision is to have EVE go on forever, and that will not be realized with a cash grab that does something in the short term for damages in the middle and long term at all. I am motivated, extremely motivated by having EVE outlive myself and my son. And if you look at the implementation we did for the [Alliance Tournament], it was extremely graceful compared to a lot of things, I would say."

The future of EVE Online also looks pretty bright from CCP's standpoint. 2021 has seen great growth, spurred on by both the new new-player experience, but also launching the MMO on the Epic Game Store and opening the universe of New Eden up to even more players. However, it's easy to also see that while many players might have logged in, retention is still something the team is working on. Increasing average play time is on the list for the developers, as well as adding onto the new player experience by teaching other core concepts like mining and more are on the horizon.

The recent cross over event in EVE Online, the Doctor Who event titled the Interstellar Convergence has the chance to bring in even more new players who are interested in shooting down Daleks and maybe sticking around to fly with capsuleers when they are done.

Interestingly enough, it was the BBC who approached CCP Games for the cross-over, and the team jumped at the opportunity to pay homage to one of EVE's biggest influences.

"The BBC approached us actually some time ago," Bergur stated with a smile. "They basically reached out to us asking if we want to collaborate, and they don't really do a whole heap of collaborations. They're very protective and very selective of who they work with. And Doctor Who is a big sci-fi insuration, especially for Western Europeans. So we viewed this more as a homage to something that has inspired a lot of people who have worked at CCP. Yes it's wacky, yes it's off the beaten path in many ways. But we've never done a collaboration this deep before, we have smaller kind of homages in the world. We have our tribute to David Bowie, our tribute to 2001 Space Odyssey and a couple of more. So we wanted to do a deeper tie in, but not something that would offset the narrative of the world and break the game."

Bergur continued, stating that the Doctor Who event pushes the boundaries of what has been done with these collaborations in the past, not just in how deep it goes but also on an audio and visual front. Saemi agreed, adding that the new event is a way to continue the push of getting new players to check out EVE Online, something the team has been working towards for years now.

"You've heard us talk about getting new players to the game," Hermannsson said following up on Bergur's comments about the Doctor Who event. This is one way of doing that. If you look at the YouTube video, which was posted on the Doctor Who channel, it has even more views than EVE Online's, and a lot of excited people about to try EVE Online out for the first time."

The event has not been without its detractors, though, as many have expressed on Twitter, Reddit and elsewhere, and Saemi states that he understands where that feedback comes from. However, the team hopes players see how respectful they are trying to be, to both IPs with this cross over.

"I definitely understand people having reservations," Saemi said. "When this happens 18 years into a game, it's like 'What's going on?' But like Bergur was saying, it's extremely graceful and respectful to the IP. [...] [N]ow they can get their hands on it, they can experience it, [the players] can see that this was a really good event."