To say EVE Online has had an interesting October is to undersell what’s been going on in New Eden. The Icelandic-developed Sci-fi MMO has gone through some pretty monumental changes as the more than a year-long Triglavian invasion came to a close. Resources have been reallocated across the EVE universe. The landscape of EVE Online’s New Eden has been irrevocably changed.

Oh, and players broke not one, but two world records in a day.

The events of the last few weeks of EVE Online aren’t something that just happened overnight, though. The team at CCP Games has been planning this story for some time, and to see if pay off in such a spectacular way was both exciting and bittersweet according to CCP’s Brand Manager Sæmundur Hermannsson.

“I think a good way of phrasing it is ‘I’m tired, but happy.’ But also sad, because this is a bit like ‘Joey-in-Friends-sad,’ it’s an ed of an era. It’s been two and a half years since Bergur and CCP Rise stood on stage at FanFest in Iceland to announce the anomalies that are happening, which led to Abyssal Deadspace. It’s been a year and a half since now since the Invasion started and when we started invading the whole world at the same time, visiting nine cities in nine countries in nine months. This week now was the Zenith – pun not intended – of everything that’s going on.”

T-Day, as Sæmi put it, was the day that the Triglavians established their complete control over the 27 systems that now make up the Pochven region in Eve Online. These systems in New Eden are completely cut off from the rest of the universe, as the inter-system stargate system was disrupted. Now to enter these systems, you need special filaments, which aren’t easy to come by just yet, or travel through wormhole space. Even then, you’re not out of the woods – you can’t easily go back to Known Space either. You’ll need to traverse the wormholes or use the Filament.

Some players, understanding what was coming, sought out ports in Triglavian space, while others were stranded there with no real way back to their homes in New Eden. Players, such as Signal Cartel’s Katia Sae, helped to create organized efforts to help stranded capsuleers navigate their way back to K-Space and the rest of New Eden.

What all this means for the future of EVE Online isn’t really known just yet. The Triglavians are here to stay. EDENCOM, while they fought valiantly, didn’t do enough to deny systems to the invading alien race. And in the background of it all is a player war that has heated up in recent weeks.

And that’s the funny thing about all the excitement in EVE Online right now – the player war felt like a true backdrop – an afterthought – compared to the PVE shenanigans that Bergur Finnbogason, EVE Online’s Creative Director, and his team have up their sleeves right now.

“This chapter has come to an end, but the book is no where close to an end. It’s a book that keeps on writing itself and we try to guide it in a direction and slowly we’re giving the book and the community more tools to write themselves deeper chapters of this epic saga.”

Last weeks theatrics included days of stargate manipulation, with many gates going down, including the outrageously trafficked Perimeter/Jita gate. And that actually surprised Bergur. When Permaband, CCP’s in-house band, had their song “Wrecking Machine” start playing at the gate, Bergur realized it was one of his guys trolling New Eden.

“Holy hell! The moment Jita went down and Wrecking Machine started…first off - no one had any idea that would happen! This is the biggest troll in gaming I’ve ever seen. It’s one of my guys who did, and I’ve never been trolled this hard in my life. I laughed so hard.”

It’s been about a year since CCP Burger stood on stage at EVE Vegas and discussed their teams plan to do the now well-underway quadrant release plan. Since then, the team has been agile in deploying updates, fixing issues, and more throughout the year, with the quadrant updates themselves setting the tone for that quarter in EVE Online.

The release wasn’t without issues, however. Players almost immediately began noticing that killing Rogue Drone rats in K-Space was a fast way to build rep with both EDENCOM and Triglavians, leading many to go from zero to 7 standing with the factions in a matter of hours.

Bergur mentions that the issue is one of the downsides to working fast, but praised the players for helping discover the exploit and putting an end to it quickly. 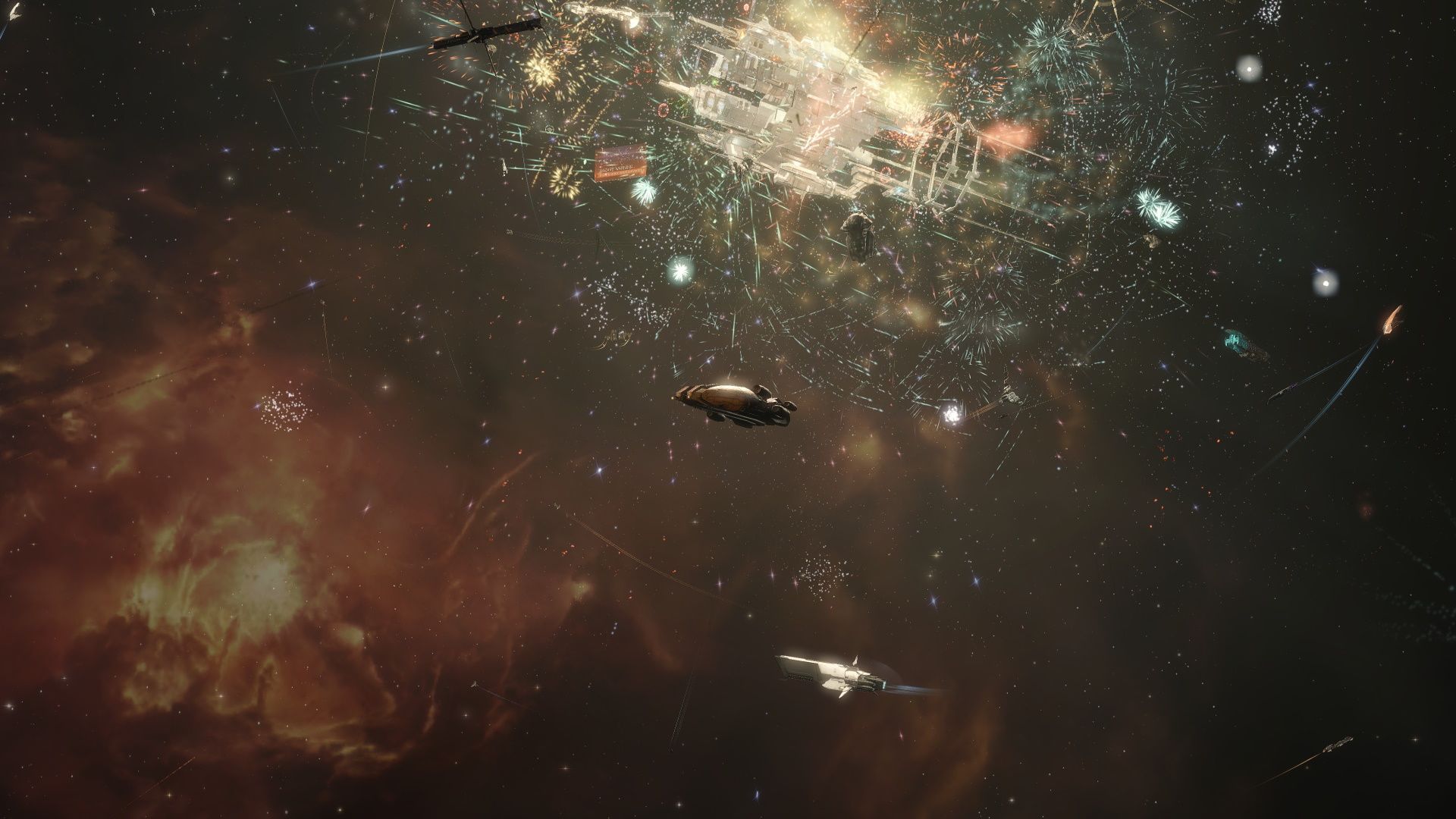 “This is one of the downsides to running fast. This is one of the downsides of when you put on the cowboy hat and decide to run faster, things like this can happen. […] This has been our attitude for quite some time for at least over a year now. Rather than sitting and debating for hours and hours. It’s better to go in, try it and deal with the consequences. Sometimes bad things happen and things you can’t really foresee happen, but you can’t test these things on a test server where loss doesn’t have meaning on Singularity.”

“What is impressive is how fast this was noted and communicated,” Sæmi added. Given the vastness of even where this can happen. What’s also cool is the community talking openly about it. I’m sure there were some Discord things trying to hide it or whatever, but we spotted it quickly because of being let know, getting good intel about it, being able to adjust. So that was cool.”

The next quadrant, Phoenix, kicked off last week. It’s meant to be a rebirth of New Eden. The universe of EVE Online has been irrevocably changed as CCP keeps saying, and I wondered what actually went into the name – does CCP expect players to rebuild, recover, Phoenix evokes specific thoughts of those things thanks to the myths surrounding the legendary bird.

Turns out, as you might imagine, game names are meant to evoke something from the players, and even the developers themselves. And Phoenix definitely does. However, it’s not just Phoenix, but even the other quadrant names that, according to Bergur, stand out even more in hindsight.

“I think, looking back on Eclipse, I think you can actually read way more into it. In hindsight, when you look at the Eclipse quadrant, there are so many, kind of, eclipsing moments in that quadrant, and even in Zenith. Just looking at Zenith now, without planning it, this was very zenith-like. [The] last three months have been filled with zenith: the war, Niarja fell, the war started really escalating back from being kind of a tug of war and being extremely personal. Now, Goons, their home is being attacked, and we’re reaching these epic, myth week [with] keepstar battles, we’re breaking world records again.”

Once a name is assigned to something, it brings on a deeper meaning, Bergur also pointed out.

“There’s something about, when you really start to look a Zenith as a quadrant and you start to look at what happened there, all of a sudden the name becomes this multi-dimensional being in a way. And there is something about Phoenix – the Triglavian’s have found their place in space, and now for them it’s time to establish themselves and build their home, make it their home. And that’s kind of the Phoenix rising.  Then there is the war – the big war – going on. And Holy Hell, you can apply the Phoenix to that in so many different angles. And then some of the stuff we have in store for this quadrant are definitely going to play into the myth and depth of that word.”

CCP are always quick to point out they they are simply janitors or caretakers of the sandbox. Yes, they define the PvE content and how it’s going to be presented, but even then you get the feeling that your specific actions in EVE Online, even when just doing PvE content, can shape the course of New Eden. That was on full display during the fevered months of the Triglavian invasion, with players siding with the invading Triglavs, while others sided with EDENCOM and the resistance. While it feels the Triglavs were ultimately successful – they took over 27 different regions – it made me wonder what Phoenix would be if the EDENCOM forces had been more successful in battling back the Triglavs and flipped those systems into fortresses.

“I think one of the beauties of this year is the control we’ve given to players,” Bergur responded. “I think one of the highlights of this year was when Sæmi pinged me and was like ‘Holy hell, did you notice what’s happening?’ And Niarja became a possible target. This was out of our hands. My heart definitely took an extra beat because I understood the impact of that system. Like, if that system were to fall, it’s a major thing. I, in all honesty, did not believe that system would fall. I’m a proud Trig support against Sæmi as the EDENCOM Spokesperson. And I was so sure that it’s such a strategically important system and when I heard that Goons and TEST were actually siding with opposite parties, I was sure that this is going to be an EDENCOM fortress.

“And when it fell? Oh my God, we tried to get the message out within the company, just for people that didn’t understand the ramification and deep impact [of the system.]”

When I asked about what happens to those EDENCOM players now that chose to side with the Empires of EVE, Bergur simply smiled and commented on his coffee, so it leads me to believe the EDENCOM’s story isn’t completely finished just yet – though he simply isn’t saying as of now.