Frozen Flame, the RPG and survival hybrid game from Dreamside Interactive, heads to Early Access tomorrow after a long development process. A more vibrant, fantasy-flavored survival RPG than some others in the genre, Frozen Flame aims to beautifully blend survival and RPG elements seamlessly. The result will, hopefully, be a title that stands apart from the dystopian survival titles that litter the landscape in today's gaming world.

MMORPG: As Frozen Flame heads towards early access, what are some of the big things the studio has learned along the way while developing the title?

Serge Korolev, Founder, Dreamside Interactive: First of all, support from the community is essential: you not only have to constantly communicate with your audience to understand their expectations, but also to receive that energy and drive that make you move forward and encourage you to continue development of the game. Open beta tests and demos play crucial roles here.

After the demo and the open beta we examined all the streams and reviews and adjusted our development plans accordingly, fixing critical moments. For example, we have refined the combat system towards better flexibility.

Moreover, to deliver the best experience possible it is important not to rush things, but moderately improve such key aspects of every game, such as onboarding, balance and character progression that are intertwined. 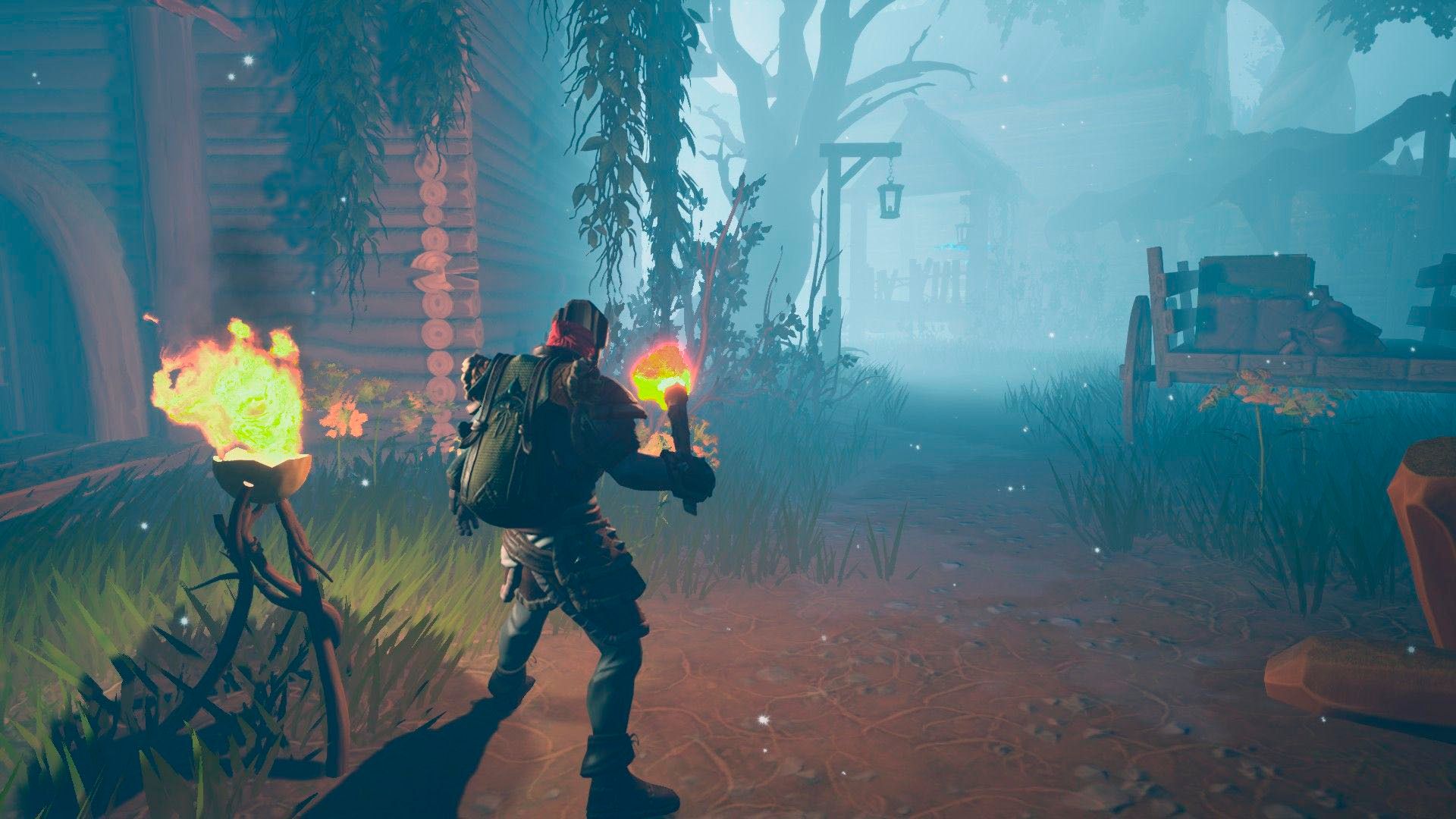 MMORPG: Survival games have seen something of small resurgence thanks to games like Valheim and V Rising in the last few years, what does Frozen Flame bring to the table to help set itself apart from these titles and evolve the genre?

Korolev: As you know, Frozen Flame is the game balancing between RPG and a survival genre. Our intention is to make a game that could become a “gateway” into the genre: to preserve challenging mechanics, yet to make them easier for understanding and application. Frozen Flame has a lot to offer to distinguish the game from many other titles: for instance, procedural generation, fully integrated flying system (which is linked to narrative and in-game exploration), relatively simple building and many features that will be introduced in the future, but it would be better to keep them a secret right now.

MMORPG: With the drive to build a game that is both a survival game with RPG mechanics, how did you balance the two?

Korolev: Long story short: through trial and error. I think it’s a common thing for every studio, for every developer. Let’s take the onboarding segment for example, which is the first thing players grapple with in the game in fact. We’ve spent a lot of time changing onboarding mechanics, because simple survival instruments like building and crafting are intuitive for gamers with relevant experience.

But our QA tests showed that many people unfamiliar with the genre are at a loss and usually don’t understand what to do, why they should gather resources, how to build, how to craft. The task is to simplify and describe these systems to that extent, that won’t bore others. Of course, it’s applicable to other mechanics as well whether that be combat or overall progression. We should consider different experiences and approaches to find that happy medium satisfying everyone or at least the majority. 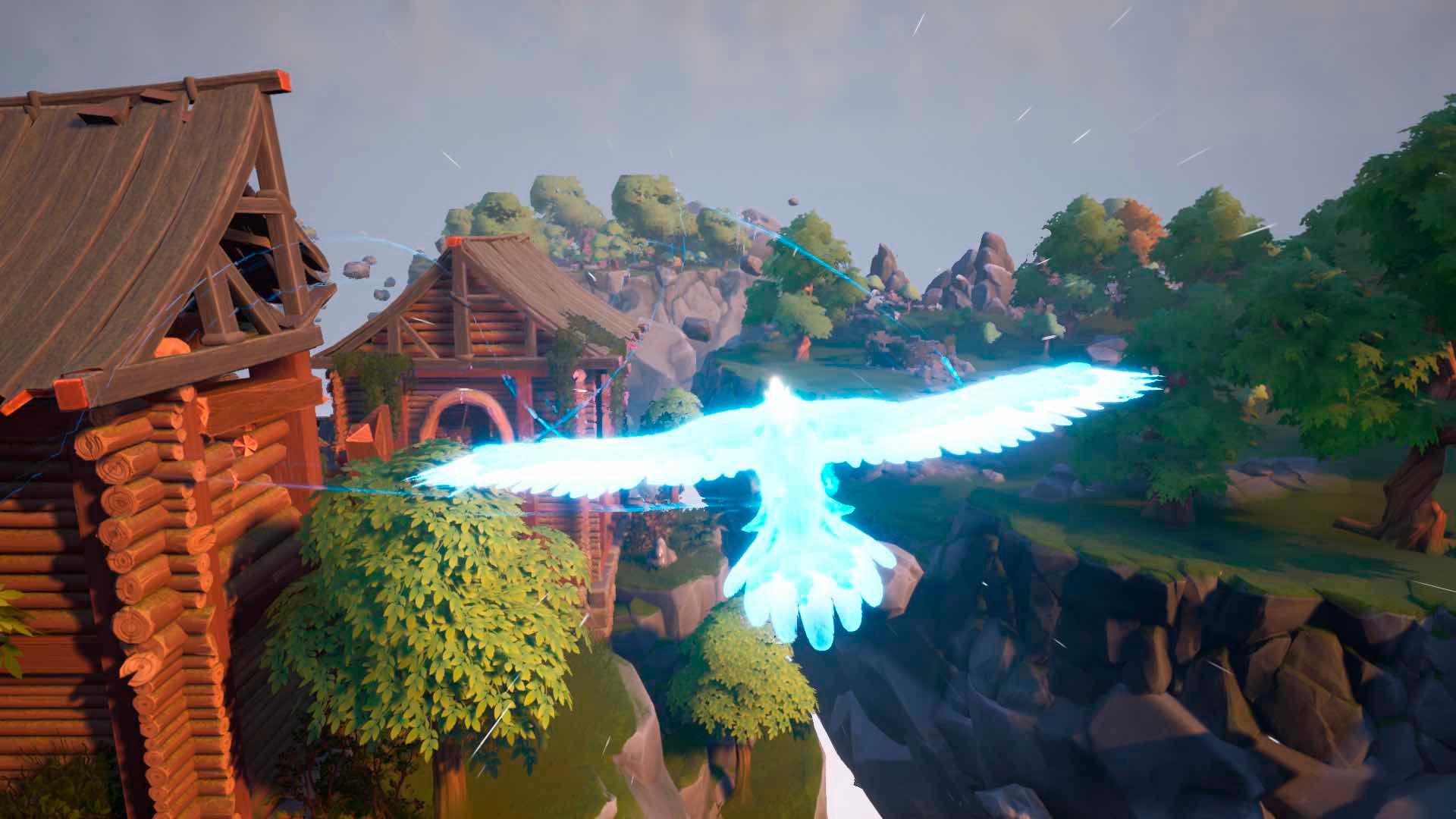 MMORPG: What are some examples of concessions you had to make to support the survival gameplay over the RPG aspects, and vice versa?

Korolev: Every concession made is a matter of balancing the gameplay. I’ve mentioned the building system, let’s look into it in more detail: to support the survival gameplay we decided that in order to move further it’s essential to build a base and install all necessary craft stations there for creation of new weapons and gear. Without high-tier equipment, players will find it troublesome to progress and deal with monsters in newly discovered biomes, while the bosses will be a one-sided extermination story. Besides, the player's gear and base will also protect from the force of nature that becomes more furious and dangerous with advancement of the story.

On the other hand, we introduced dungeons and camps with treasure chests, which reward players with different tier equipment or supplies: the harder the battle, the better the prize. Theoretically, you could get the required equipment from beating such enemies, it might take more time though. These two mechanics are a sort of concession, one to another, yet they provide different solutions for different gameplay preferences. 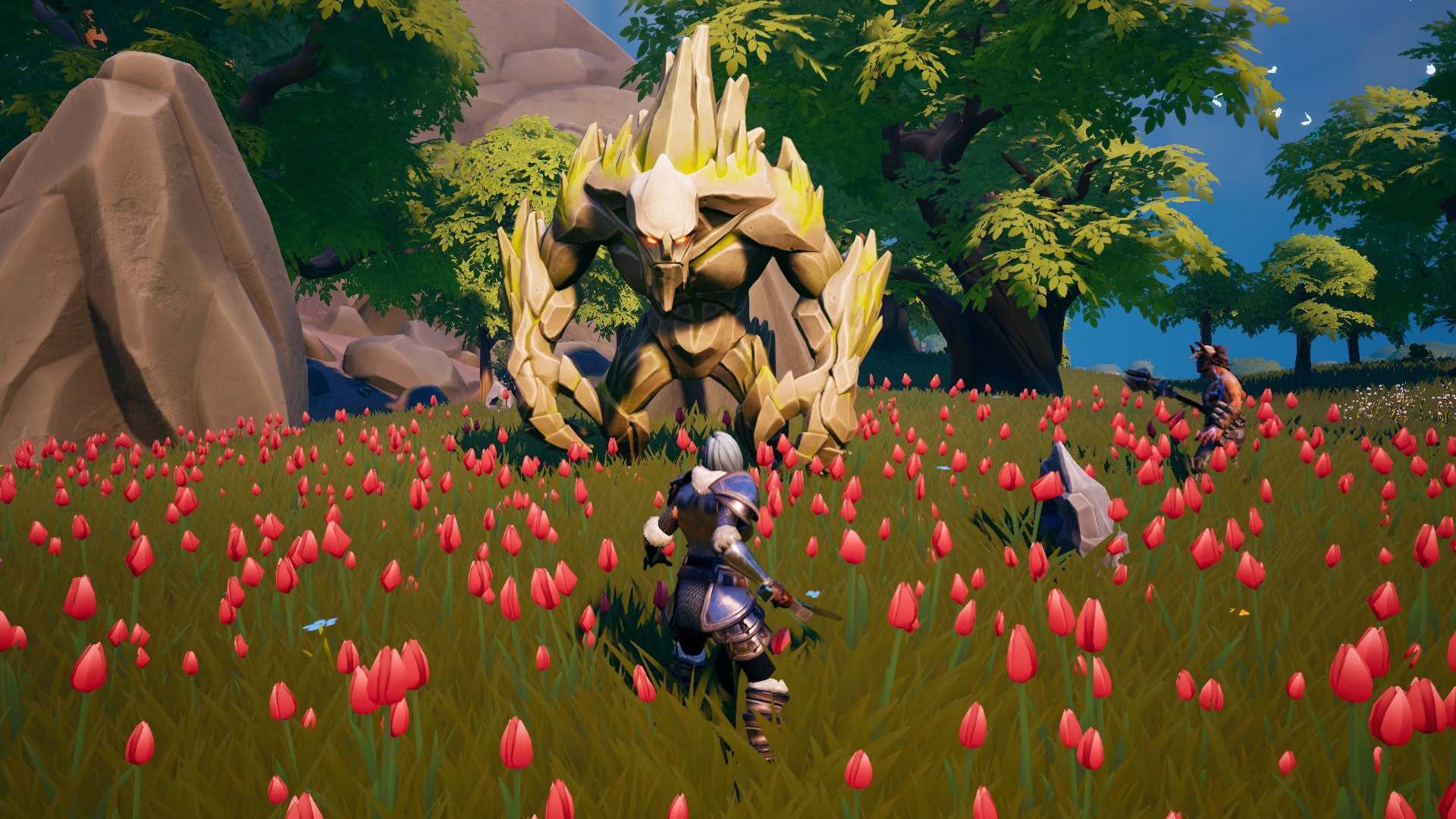 MMORPG: How has fan feedback from recent tests helped to shape the game that will be coming when Frozen Flame hits early access?

Korolev: It was encouraging and inspiring. The recent open beta helped us to find some weak points that we are polishing right now. For instance, better balancing and better optimisation is something we need to pay attention to in coming updates.

MMORPG: The world of Frozen Flame is vibrant, a far-cry from the dystopian settings of many hardcore survival games on the market. Was this purely from a genre setting fatigue of your own, or was it simply as a way to help differentiate the title from the rest of the genre?

Korolev: I would say it’s a combination of everything: we do have a sort of genre setting fatigue, it’s a way to differentiate the title indeed, but also it’s a great narrative instrument. The Cradle of Keepers (the first biome) is more welcoming and bright in contrast to other locations, which will gradually show the decay of the dying world. 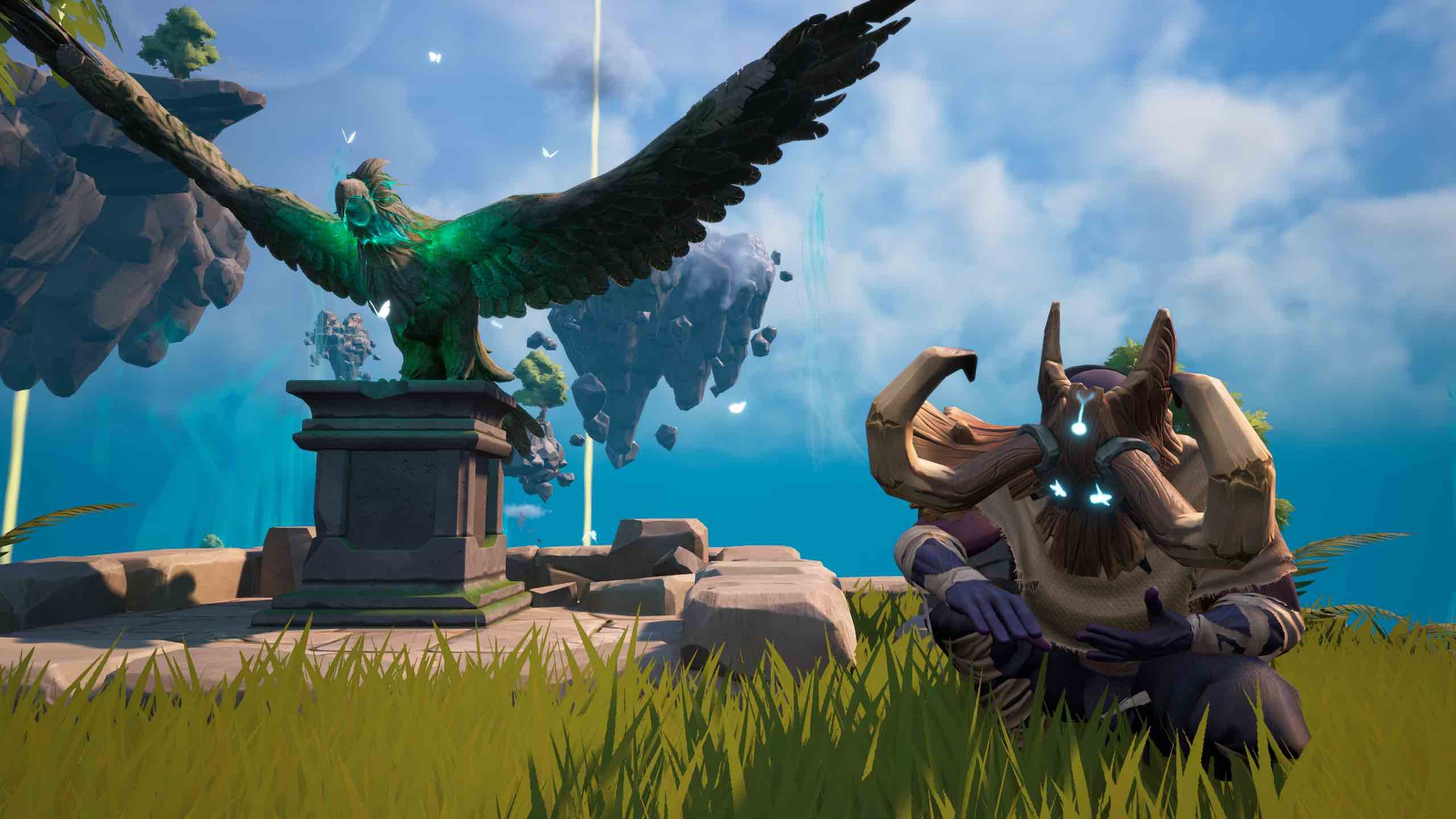 MMORPG: Frozen Flame is described itself as a game with “procedural generation of parts of the landscape.” Does this mean that there will be constant, familiar locations regardless of server, or will each world and server be wholly distinct? Can you elaborate on exactly what will be procedurally generated and what won’t?

Korolev: Some locations will never change their position regardless of the server, namely the Cradle of Keepers (the first biome), the Sanctuary (story-related biome with all major NPCs) and the Ice Citadel (final destination, where Faceless is dwelling). Floating islands, however, will change their location every time players launch a new game (the Broken Valley, for example). Thus, each adventure gives a fresh experience.

MMORPG: How do you envision different playstyles thriving in Frozen Flame? Are you allowing for some variations on the theme by supporting those players who just want to build, versus those who are the adventurous exploration types and all they want to do is go seeking monsters to slay?

Korolev: There is no correct path to “beat the game”. Players are free to choose the best comfortable playstile for them, and we, as developers, try to provide this opportunity. The game won’t impose anything on players that are interested in building and expressing their creativity. In particular, we believe that the Broken Valley and other biomes that will be available in the future will encourage the creative potential of our audience (for instance, to build such structures as bridges and towers to make islands more accessible). As I’ve mentioned before we also consider the interests of those who are interested in slaying monsters by challenging them with tough encounters and rewarding accordingly afterwards.