Are you a fan of RuneScape but don’t have enough time to devote to content and skilling? Wish your progress would keep going while you work a long shift or get some sleep? Keep on reading because we think you’ll like this one. Melvor Idle is a brand new, casual, indie adventure game that emulates some of the best parts about skilling in RuneScape, so much so that Jagex reached out personally to offer to publish it. We sat down this week with Brendan Malcolm to talk about Melvor Idle, his inspiration, and how he partnered with Jagex to make this indie idler a massive success.

MMORPG.com: You’re the founder of the Games by Malcs studio and undertook Melvor Idle’s development all on your own back in 2018?

Brendan Malcolm, Games by Malcs founder: Yes! I’m the founder of Games by Malcs, and for a long time the solo developer behind Melvor Idle. It was an idea I’d been toying with for a while, but really focusing on Melvor only started in 2019, and it only became my full-time focus last year.

MMORPG.com: Did you already have a background in game development, or was this a completely new adventure for you?

BM: As far as game development goes, Mevlor Idle is my first public project, and I’m an entirely self-taught coder. It was only in 2019 that I dropped out of a university cybersecurity course to focus entirely on developing Mevlor Idle. I realized I had to make the choice between continuing with education or focus on what would eventually become Melvor Idle. It was definitely a terrifying idea at the time, but it has certainly worked out for the best!

MMORPG.com: What was the hardest part about developing Melvor Idle on your own? What kept you going when things started to get more difficult?

BM: The hardest part was something common to most game developers who are trying to work around a regular job - time management. Working 9-10 hours and coming home to develop a game that has no guarantee of success is very difficult! Looking back on it, a lot of the time wasn’t even spent on “developing” the game, but more on the connecting tissue, like the business side of things. In the early days engaging with the community could eat into the small hours of the morning, answering DMs and sharing details etc. But looking back I found that engagement was also what kept me going and allowed me to turn Melvor into a success.

MMORPG.com: Now on the other side of things, what was the easiest part about developing Melvor Idle? What came naturally?

BM: This is always a more difficult question! But I’d say it was when I got to really focus on the design and the direction of the game. I’ve gained a lot of experience over the last couple of years finding out what works for Melvor as an idle game, and what the community wants to see from it as an evolving living game. Actually, getting in the zone and making that a reality is what I’ve enjoyed the most. Both with planning future features and sorting out their implementation.

MMORPG.com: What games did you end up drawing inspiration from?

BM: Obviously RuneScape is the biggest one. I like to think that Melvor Idle takes RuneScape’s core gameplay mechanics and condenses them down into bite-sized moments in a way that players can enjoy even when time is tight. For the world building aspect, the Elder Scrolls series is definitely a big influence, along with Diablo. Before starting work on Melvor I went through games such as Clicker Heroes, Cookie Clicker, NGU Idle and a lot of other idle games. While I really enjoyed them and appreciated the immense amount of work that went into them, I felt like there was more room to explore within the Idle game genre.

MMORPG.com: Congratulations on getting published by Jagex, that’s incredible! Can you tell me a little about who reached out to who and how this partnership came to pass?

BM: Apparently Jagex first became aware of Melvor Idle when one of its team flagged it internally. It’s obvious to anyone who has played both games just how much Melvor owes to Runescape as a source of inspiration, its DNA is threaded throughout the entire experience.

When Jagex Partners really looked at the game, they recognized how much had been achieved in a short space of time and how much of it aligned with RuneScape. The team reached out to me through Reddit and then Discord to discuss the possibility of working together and we found that we lined up very well on core values and what we think makes a good game. The rest, as they say, is history. It was a natural fit to decide to work together and we both really liked the idea of someone from the RuneScape community being helped to make the best possible game they could, with Jagex’s support.

MMORPG.com: The name Melvor Idle…I get the “Idle” part, but where does “Melvor” come from? Is “Melvor” a reference to a character in-game, or the name of the world we play in?

BM: In all honesty, there isn’t a story behind the name Melvor! Back when I started making a game, Melvor was just a name that emerged from my head full of fantasy-RPG naming tropes. 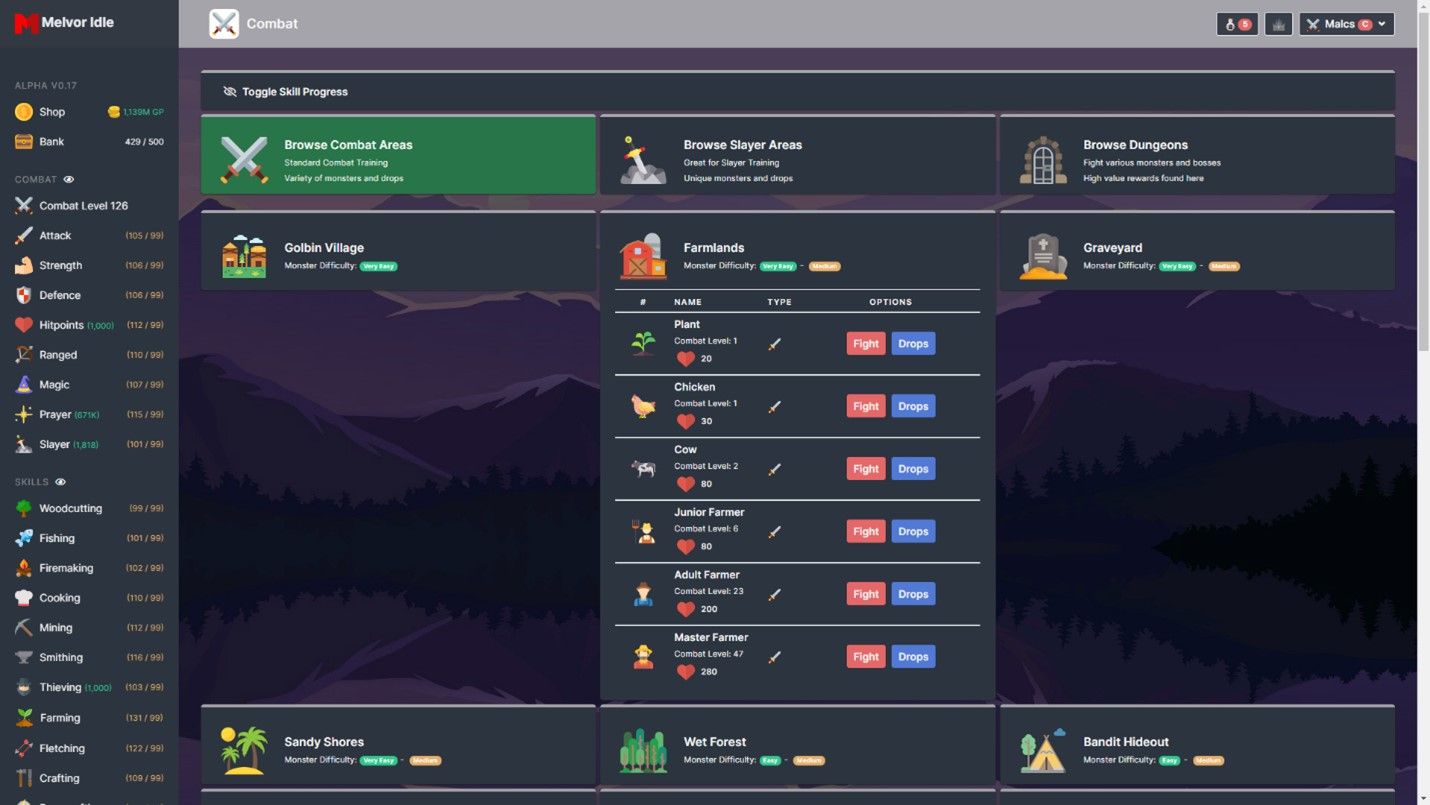 MMORPG.com: Since we’re dealing with mainly text, is there going to be any underlying story for us lore hounds, or is it just all about that sweet, sweet serotonin hit?

BM: Fleshing out the lore of Melvor Idle is actually very high on my to-do list, and I actually have plans to employ a full-time writer to help codify it before implementing it into the game. The game does contain some Lore already through the use of Books you can acquire after defeating some of the hardest Dungeons. These Books setup the foundations of the Melvor universe that I plan to expand on heavily in the coming Expansions.

There are also hints at it in places already, with some item descriptions and flavor text in places, but what is lacking is the overarching worldbuilding present in games such as RuneScape that were so key to inspiring Melvor Idle. Definitely watch this space, I think it's something that the Melvor Idle community is really going to enjoy.

I noticed that there’s an extremely in-depth combat system! Does this also include magic, or are we mainly focused on melee and physical ranged combat?

The existing Combat System includes Melee, Ranged and Magic Combat for you to explore! You will be using all three types of Combat many times during your playthrough. 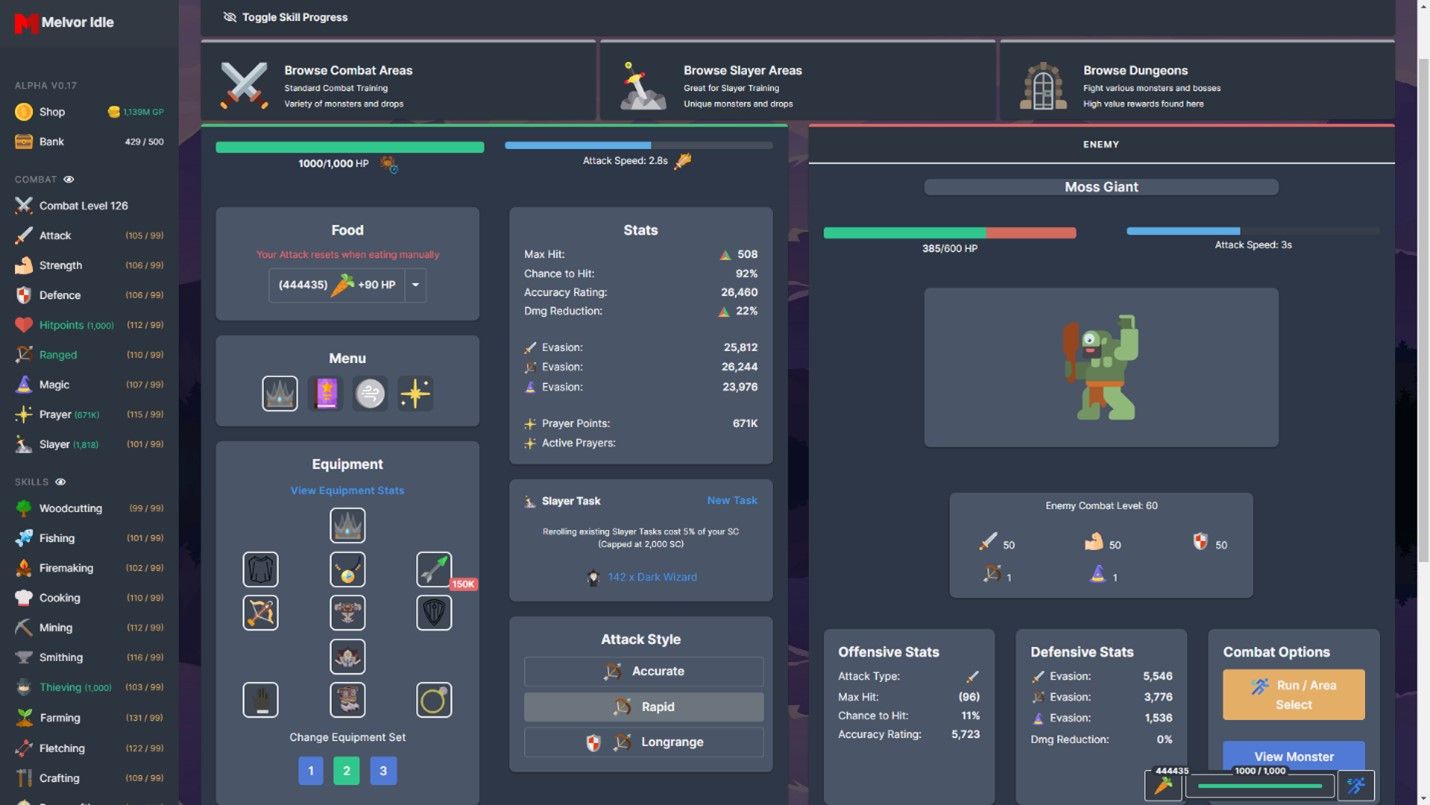 How did you go about settling on the combat system, and what were some of the challenges you faced when trying to capture a satisfying combat experience for the player?

I’m glad you’ve asked about the combat system! For what felt like the longest time it was top of my priority list to improve on, but it was a mammoth task. It's actually what led to me hiring my first employee at Games By Malcs, a programmer from the community who could focus specifically on the combat system. This was a huge part of the Alpha v0.21 update, and having the capacity to hire more people in future opens up a world of possibilities for similar updates.

MMORPG.com: I can’t tell you how exciting it is to see that there won’t be any microtransactions. Not only are we getting an even playing field, but you’ve also stated that there are going to be monthly content updates as well as expansions coming in the future. Can we expect the expansions to be free to the player as well, or will this be the primary way we can show continued financial support for the game?

BM: While our focus is currently on this patch, we are working on several massive content updates which will be available to purchase later next year. We look forward to talking about these in more detail as we get closer to their release.

Now for some fun questions!

MMORPG.com: Stop the presses, there’s over 40 pets in Melvor Idle? Which one is your favorite, and why is it the otter? Please tell me there’s an otter.

BM: Chio is by far my favorite Pet in the game (And I assume the most popular Pet as well)! I think the community has developed this relationship with Chio that goes unmatched in other similar games. Chio looks like an otter, but in fact Chio is a Cat who has eaten a little too many treats!

MMORPG.com: What first drew you into Runescape, and when did you start playing?

BM: Like most people, I started playing RuneScape because most of my friends at the time were playing it. The fact that RuneScape was a browser-based game was a huge part of this, that low barrier to entry combined with RuneScape’s branching depth and complexity were what kept me coming back to it for a long time - which is something I wanted to replicate with Melvor Idle.

MMORPG.com: Do you prefer Old School RuneScape or RuneScape?

BM: I prefer Old School RuneScape. This is mainly due to the nostalgia it provides me as I first started playing RuneScape back in 2006. Most of my inspiration for Melvor Idle indeed comes from OSRS.

MMORPG.com: I only recently obtained my first skillcape, and it was…firemaking. I admit it, not the coolest, but you can probably tell a lot about someone by what they chose as their first cape. What was your first Skillcape?

BM: My first Skillcape was actually the same in Melvor Idle as it was in Old School RuneScape. I have no idea what draws me to that Skill to complete first, but it always seems to take priority over every other Skill. Maybe it's because it is one of the most Idle Skills in both Melvor and OSRS? Or I have some unknown love for the Skill that I’m yet to discover.

MMORPG.com: Do you have any favorite quests or particular story bits that stick out in your mind?

BM: Not necessarily, no. I’ll be honest and say questing within OSRS is something that I kind of turned a blind eye to. I was more involved with the general skill progression the game has to offer. This kind of personal preference can be seen throughout the design of Melvor Idle where there are currently no Quests, and the sole focus is on that progression aspect OSRS provides.

MMORPG.com: Which god banner do you fly?

BM: Definitely Aeris. It’s the first God I planned and is by far my favorite.

A huge thank you and congratulations again to Brendan Malcolm for sitting down to share his thoughts and feelings with us on Melvor Idle! Stay tuned for our next interview with Chris Pfeiffer, Director of Product Management for Jagex Partners, as we’ll learn a little more about his position within the company and the potential they saw in Melvor Idle.