When I was in high school, I was pretty convinced I was going to be a musician. In school I excelled at music, earning state honors and was lauded at honor bands and camps wherever I went. So when I graduated and started working at a local music store so I could get my feet wet in the local music scene here in Las Vegas, I felt pretty determined I would make it.

Well, fast forward 17 years and obviously, my career path changed. But my love of music never died down, instead over the years it's only intensified.

One of my favorite aspects in many MMORPGs are the music and performance systems many developers put into them. They not only give another dimension to the world but allow players to showcase their own creativity in a real way. So when New World announced that alongside its Medleyfaire event this year we'd be seeing the introduction of its own music performance system, I was eager to check it out.

On the PTR this last week I've spent time diving into the faire, learning the music system and I have to say I really love this. It's not perfect, but it's such a fun way to spend some time in Aeternum in between a PvP battle or when waiting for your party to start the next expedition.

Instead of it being a free notation system, New World's dev team opted for a rhythm game, directing players to hit the WASD, Spacebar and mouse buttons in time with the music as it passes don't the grand staff. You can play one of five instruments: the guitar, the Azoth flute, drums, upright bass, and mandolin. Each song (and there are 31 songs at launch), has predetermined instrumentation and you can team up with multiple players to build out the band.

I have to say, too, the songs New World has written for the new system are pretty fantastic. From melodic mandolin lines that remind me of some of the best bluegrass out there to bass licks that slap almost as good as Davie504, there are some real gems launching with the system.

However, my favorite instrument so far has been the Azoth flute. More of a solo instrument, what I love the most about it is it reminds me of old Native American wooden flutes I used to sell at the music store. The flute has a distinct breathy sound with an amazing drone that melds into the melody beautifully. It really reminded me of these flutes I grew up playing and then eventually selling in the early part of my adult life.

The music system in the Medleyfaire might be my favorite music system in an MMORPG to date.  It has its limitations, such as the fact that you can't just whip out your guitar and start taking requests unless they are one of the songs the dev team have written (no Freebird in Windsward, thankfully), nor is it likely we're going to see community events as creative as LotRO's Weatherstock. Thankfully, though, it feels like a system the dev team is going to be supporting for quite a while.

We had the chance to chat via an email interview with the dev team about the faire, the music system and some of the biggest changes coming with the next update.

MMORPG.com The Medleyfaire event: can you talk a bit about the inspirations behind a summer event that involves music and fishing?

Mike Willette, World Experience Lead- We really wanted to celebrate things we like doing in the summer. A time to celebrate being outdoors and hanging out with friends. Good music, good food, and a little bit of Aeternum magic. We also wanted to add new activities for players to do during events and there was great synergy between our mechanics and the story we wanted to tell.

Designing the music rhythm minigame: were there any inspirations from other minigames of the sort that you leaned in on? How did you land on the five instruments you chose for the minigame? Are there plans to add more in the future (say, a saxophone for us jazz enthusiasts?)

Phil Bolus, Sr. Game Design Manager - When we approached the ideation for this feature we reviewed a TON of other instrument features in online games as well as rhythm action games, and wanted to do something unique to the MMO space. We are all a bunch of avid rhythm action game fans so there was a fair amount of inspiration from some of our favorites.

As for the selection of instruments, that was primarily driven by our amazing Audio team as a way to compliment the current musical pallet in the game and provide really energetic moments for socializing around a group of performers. We are eager to get feedback and see how our players are feeling about the feature to determine where to take it next.

31 songs out of the gate is a lot and should be commended, but in my playing on the PTR, I was a little let down by the fact that it doesn’t seem that you can create your own music. Are there plans to expand this system to give full notation to players?

PB - As of this moment we aren’t planning to allow players to create their own music. We approached this feature with the desire to make it approachable and fun for all players regardless of their ability to compose actual music. We do plan to add more songs to the current catalog in future updates, and again, based on player feedback we’ll assess future feature updates.

For those players who really don’t enjoy fishing in games, are there any activities that they can do to still participate in the festivities?

MW - Well I would hope they give fishing on Aeternum a try! It is a centerpiece of the event and is very rewarding. Playing music to catch Maudlin bugs can reward you with some good bait to catch Aeternum Sturgeon, and there are lots of fishing hotspots around the world during the summer event. (But the magic sturgeon can also be caught in any waters). The Maudlin bug dust players collect from playing music at specific Maudlin bug areas can also be used to get Summer tokens in the shop. Players can also dance at each of the Medleyfaire locations to earn event reputation gaining them access to higher shop rewards. While fishing for sturgeon you can catch resources to build your own Fish mount for your home.

For future events, how do you see the New World team ensuring that each year these events are varied and offer something unique, so they don’t feel too routine as time goes on?

MW - We don’t have anything specific to share right now, but we are discussing adding additional content in future years.

Barnacles and Black Powder: I love the fact that players can jump into a cannon and fire it off at the Admiral. The boss fight really feels like it requires a ton of movement on the part of the player as well. Can you talk about the design philosophy and process behind creating this boss fight and how it might influence future bosses down the road?

MW - we are always looking to create new experiences with our boss fights. It could be revolving around navigation, or a unique puzzle pattern, or a new fight mechanic. We really wanted to lean into the pirate fantasy in Barnacles, and what better way than with cannons! We want to make the players’ actions and the stories we tell closely match whenever possible.

One thing about the Barnacles and Black Powder expedition is that it seems to lean super heavily in on the pirate/age of exploration themes of New World in a way that while others might have touched on them, they felt more aligned with the supernatural aspects of Aeternum. What was it like to create this pirate-y area that leaned into the treasure hunt fantasy that New World has always given vibes of while also making sure it blends the supernatural that makes the world interesting?

MW - There are many stories to tell on Aeternum and we are always looking for the best vessels to tell them. The team had a lot of fun going through the creative process in developing the lore and the set pieces the player goes through - Haunted treasure, booby traps, and of course pirates! The team looked for new interactions and a new mood to bring to our endgame expeditions. We hope players enjoy playing it as much as we had building it. 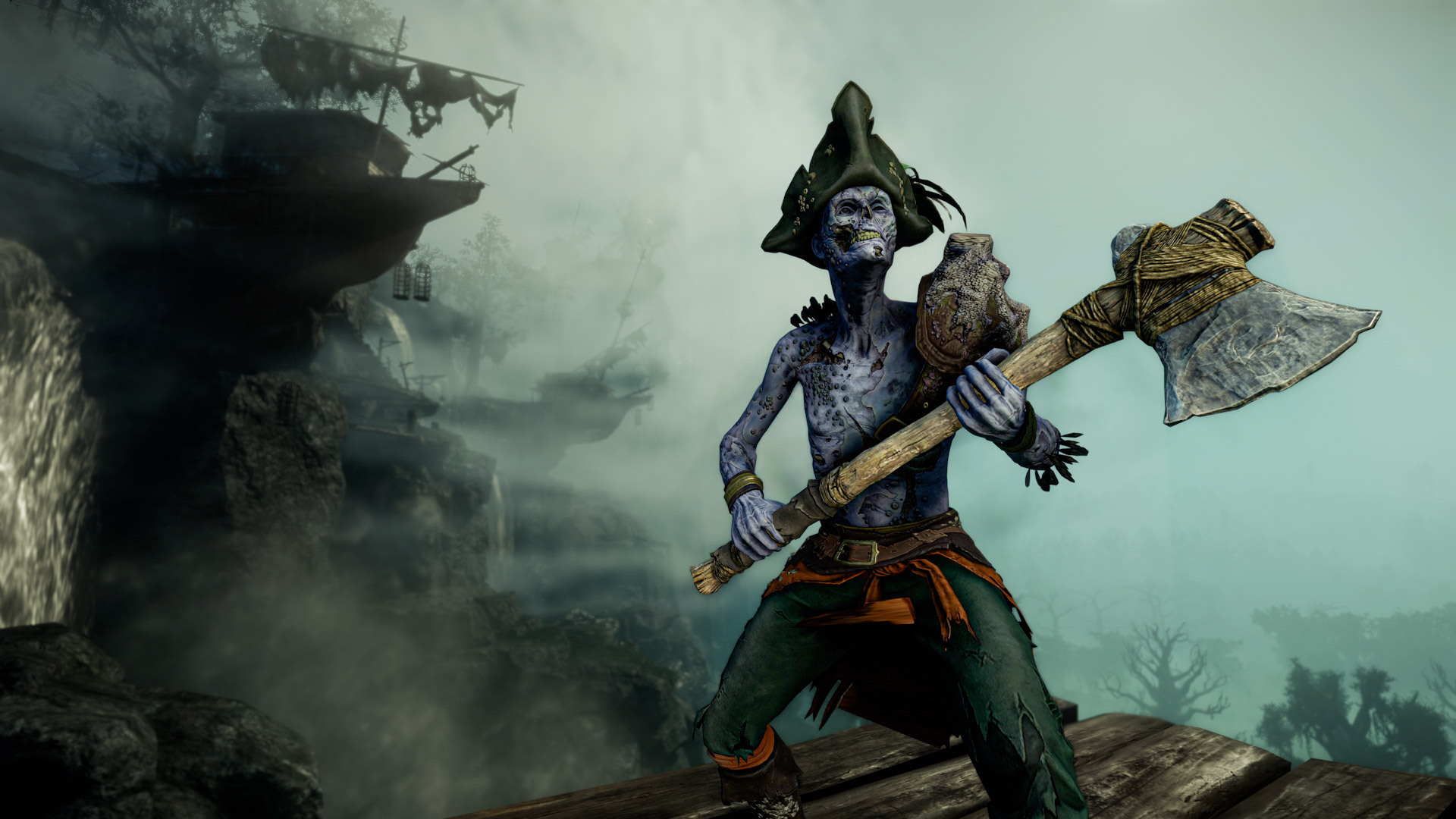 New Mutators are coming to New World’s expedition: can you talk about those and how the team ensures they can keep coming up with new mutations to keep these encounters more interesting as time goes on?

MW - Mutations are a meta game mechanic that add increased challenges, variety, and rewards to expeditions. Mutated expeditions have three categories of mutations, base mutations which are elemental, promotions that are based on perks, and curses that are scripted or status effect driven. We have three brand new ones that we just launched in our PTR that will go live in this update:

The core idea is to build out a strong foundation of mutations that can be mixed and matched, providing a wider amount of gameplay variations and challenges. With this release there are 64 different combinations of mutations. We haven't given ourselves a final number of mutations. We want to see how the current set integrates into the overall system and where we need to balance and adjust. Nothing we can share today, but we are looking at other additions to improve mutations in the future.

Removing Tuning Orbs: what has the feedback to this change been and does this signal a willingness on the team’s part to revisit major aspects of the title in the future if it’s just not working?

PB: The Tuning Orb changes have been met with a good amount of feedback since we announced it. The feedback overall has been positive from most players. We did make some adjustments to the amount of times players can run mutated expeditions per week based on PTR data and critical feedback.

As a live game, we take a very customer-centric approach in listening to player feedback and monitoring our engagement data to continuously improve New World. We heard the feedback loud and clear on Expedition Tuning Orbs, and agreed with the players that it wasn’t working. We missed the mark with the initial implementation, which added much more friction to daily play than intended. After hearing initial feedback on tuning orbs, we added lower friction ways to acquire them in-game as an interim step while we worked toward goal of removing the orb requirement altogether with our July update.To that end, we remain very open and willing to make revisions provide our players with the best experience possible in New World.