As the resident graphics nut here at MMORPG, I had the chance to ask the World of Warships team about their shiny new visuals and, yes, ray tracing. I can’t not talk about ray tracing, guys. The update itself touches on water, a shift in materials, new vegetation, and more. Many thanks to the team for their time. You can check out the full interview below.

MMORPG: Regarding water, you mentioned your old model was ray traced in some way. Can you expand on that?

We were not really using raytracing, our model was based on reading multiply samples from huge water heightmap texture, and approximation of these samples to determine gradient of a wave at the given point. So, when it comes to distant points, we needed a huge number of samples to get the correct average value. With the new approach we can use mipmapping instead. That way, we always have correct roughness for any scale of water surface.

MMORPG: What drove the decision to move to DX11 instead of other APIs like Vulkan? DX11 has historically been “heavier” on system resources than Vulkan.

Basically, we needed to adapt to our players. Vulkan is good for parallel compute and modern multithreaded devices, but a big part of our audience plays with up to 12 [year] old hardware. These devices can’t use advantages of modern APIs like Vulcan and DX12.

MMORPG: Regarding photogrammetry, can you describe your intake pipeline to implement such new texture and material details?

We have now started using photogrammetry to create objects and textures. We use photogrammetry either by finding ready-made models, or if needed, we arm ourselves with a quadcopter drone and go film the location ourselves to get the 3D objects that we need. But, of course, this process is time consuming.

After that, we start creating natural objects of the location using photogrammetry for detailing, and we can use it in different scales, for example, for the general shape and for some small details. After we begin to overlay tiles on the resulting model (textures of stone, sand, grass, and others), which are also obtained using photogrammetry and contain volume. Tiles are superimposed by masks on the object, taking volume in account.

For example, a stone when applied to grass will always be higher, sand is lower than grass, which at the end creates a realistic interaction and have for result to obtain very high-quality object.

MMORPG: Does the sky leverage photogrammetry scans as well, or is it limited to land and sea geometry?

Sky is different. We shoot the sky without volume, but in 360 degrees including the horizon in a high color range, which accurately conveys dark and light areas of the sky. This, in turn, allows us to achieve realistic lighting of objects in the scene. 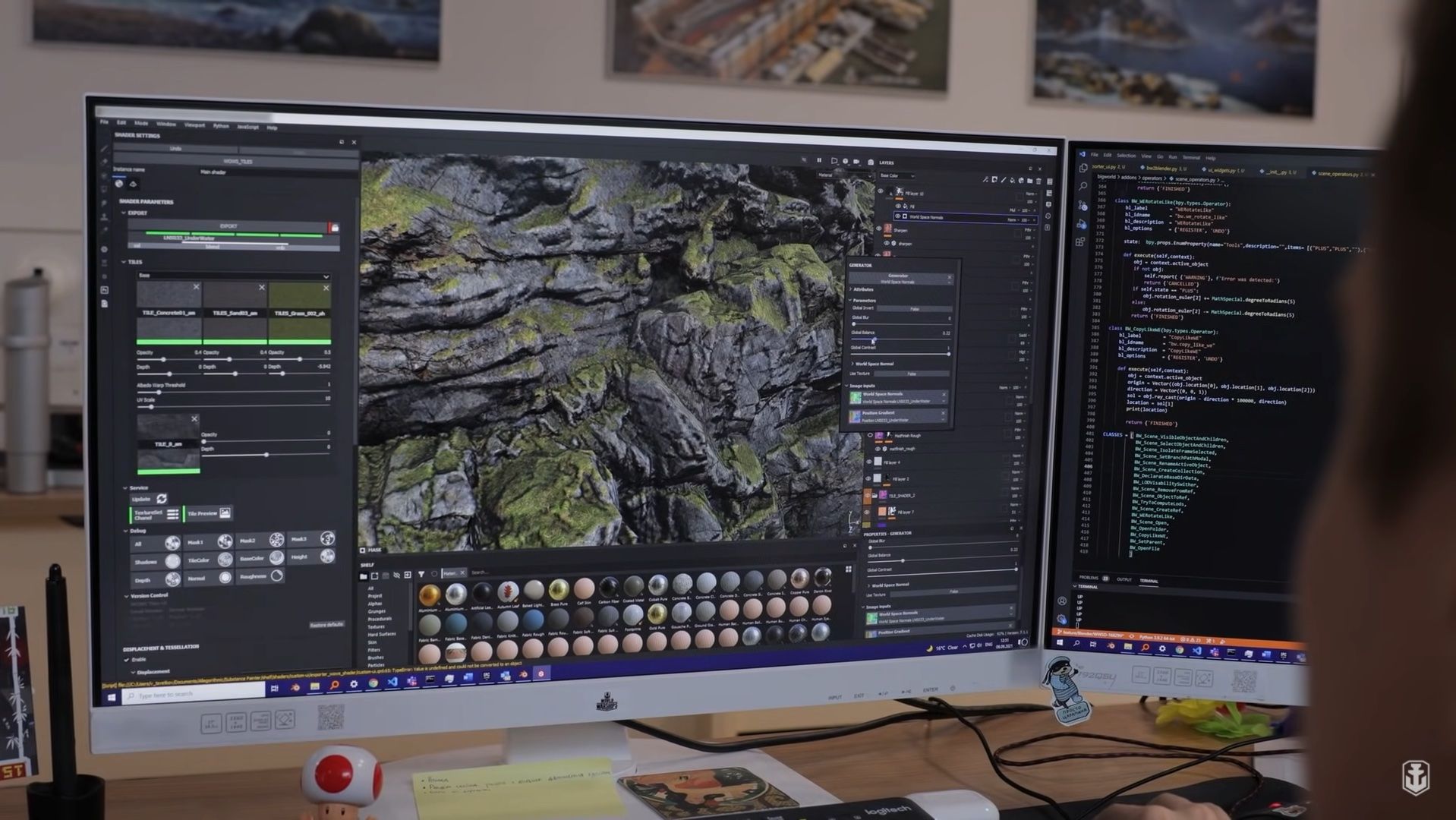 MMORPG: Is your lighting system using standard probe lighting, or leveraging some sort of voxel-based GI to complement the PBR materials? How specifically is indirect lighting handled?

Now, we don’t handle indirect lighting at all. For the very open maps GI makes a small part of the whole lighting. We use prebaked AO (ambient occlusion) maps for ships. And in [the] next versions, we will introduce dynamic Screen Space AO.

MMORPG: Looking ahead, are there any plans to implement ray tracing as a lighting solution? No doubt, this will necessitate a move to DX12 to leverage DXR.

Right now, Ray traced [techniques] are too heavy for most of our PC players. But our colleagues at WoWS: Legends are going to bring raytracing for modern consoles in the near future.

MMORPG: With all the new features and effects, will DLSS and FXR be included to offset any performance costs? If not, are there any future plans to implement these technologies?

Indeed, FXR is already implemented. DLSS is supported only by modern hardware, and such devices can run World of Warships at native 4K without any performance issues.

We are happy to say that for the big majority of players the graphics update had almost no performance impact.