When a game launch doesn’t go well it’s easy for dissatisfied fans to dismiss a developer’s efforts as half-assed or, even worse, claim their only purpose was a quick cash grab. In reality, with the complexity and demands of developing a modern game continuing to rise, more and more triple-A releases are being met with internet crowds armed with pitchforks and torches, ready to crucify any who stands in defiance of their review bombing and negative social media campaigns.

Godfall, the looter-slasher developed by Counterplay Games and published by Gearbox Publishing, happens to be one of those games. There’s another side to the story, though. A side where a dedicated community has happily continued to play Godfall since it was released in November 2020. A community that would forego spit and vitriol and instead offers up constructive criticism that could be acted upon by the developer.

We are nearly a year and a half removed from Godfall’s ill-received launch. During that time, Counterplay didn’t just walk away and move on to a new project. Instead, they continued to tweak and refine Godfall based on the criticism, both constructive and not, in an effort to make it a better experience all around. The team’s hard work has resulted in the Primal and Lightbringer updates as well as the Fire & Darkness expansion, all of which received positive feedback for the improvements they brought to the title.

Now, with the free Exalted update addressing even more of the community’s feedback and the Godfall: Ultimate Edition launch expanding the player base to include the Xbox series of consoles and Steam for PC, we were able to submit a few questions to Counterplay Games about their reaction to the initial reception of Godfall and how it affected their post-launch development.

Daniel Nordlander, Game Director for Godfall, Counterplay Games: We were honored to be part of the PlayStation 5 launch. Being able to share a game with the community at the same time as a new console means you’re among the first developers that get a chance to explore new tech and find creative ways to incorporate it into gameplay.

MMORPG: In a similar fashion, do you believe bringing Godfall exclusively to the Epic Games Store at launch had any factor in its initial reception?

Daniel: We were thrilled by the response and reception we received from the Epic Games Store community at launch. We are always looking to meet players where they are, so when the option to expand became available to us it was only natural to support it on Xbox and Steam.

MMORPG: Did any time constraints imposed by releasing Godfall within the PS5 launch window push the team into a situation where they had to cut content or force game mechanics to be pushed out the door without proper polish? Would a few extra months have given you the time needed to release a more robust game?

Daniel: Game development is always tricky, particularly development during such a difficult time globally. Our intent with Godfall is always to deliver the best experience possible and we are proud of the game we launched back in November of 2020. We are grateful to the Godfall players who have been understanding of the challenges placed on the team developing in a pandemic/fully remote world and hope they continue to support us.

MMORPG: When reviews and player criticism began flowing in, how long did it take to realize you hadn’t met the consumers’ expectations? How did this change your post-launch plans?

Daniel: Critiques are part of game development. Not only do players have expectations, but we as developers do as well. More often than not, the harshest critiques come internally because we’re always striving to be even better. That said, these critiques drive us to actively listen to players and then we do our part to make Godfall the best game it can be.

When developing the Exalted Update and Ultimate Edition we sifted through mountains of forums, thousands of social media posts, hundreds of hours of videos, as well as reviews. We made it our goal to tackle as many of the recurring notes we were receiving from players as our development resources would allow us to deliver with high quality. 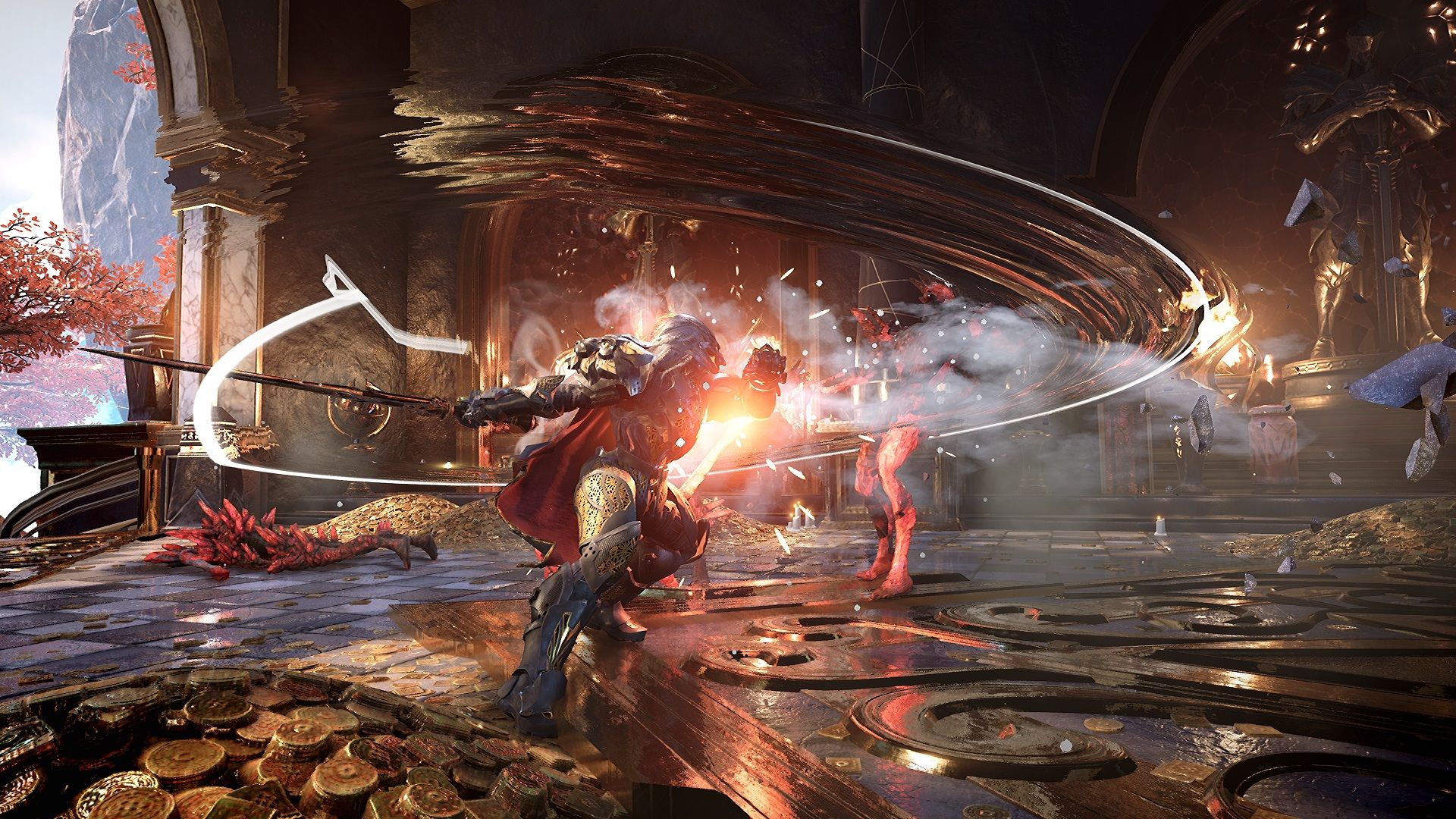 MMORPG: Over the last year and a half, each major update has addressed bugs and other player concerns with the original game mechanics. At the same time, you’ve also been able to deliver new game systems and content. Has it been difficult to find a balance between improving existing features and creating new content so that you not only appease current players but also bring new players into the Godfall community?

Daniel: You work hard to give back to your core community who is in the trenches with you every day, but you also work hard to drive new players to experience the game that you put your heart and soul into. More often than not, that core community will be your loudest advocates and drive new players to your game. We love our Godfall community, and hope that as we launch on Steam and Xbox we have even more gamers find a love for our title.

MMORPG: When receiving player feedback, how do you implement their ideas or address their concerns without losing your initial vision of what Godfall should be as a game?

Daniel: It’s a constant dialogue within the team; we are also Godfall players ourselves and often find that many of the community requests are fully aligned with our own vision for where to take things next to improve the experience. In our weekly design meetings we have a “Bullshit of the week” topic up for discussion - this can be anything we feel causes friction in the game which we think warrants us making a change. Oftentimes it’s coming from us playing the game, but many times we would bring clips from streamers and community members playing to show where they were suffering the most. This allows us to best target a fix. The point is it doesn’t feel like we’re being dragged in different directions here. We’re always eager to iterate on the Godfall experience alongside the community and are extremely proud of the changes we’ve made to best serve our players.

MMORPG: As Godfall comes to new audiences on Steam and the Xbox ecosystem, what are the biggest changes and additions that you’ve made with the Exalted Update that will help overcome the voice of the naysayers from the original Godfall launch?

Daniel: Counterplay has reviewed countless forms of player feedback and requests, two of the most popular being to bring the game to Steam and Xbox. Expanding the playerbase is just one part of our continued efforts to perfect Godfall. The Exalted Update contains quite a few major fan-requested features and enhancements, including more depth and identity for each of the 12 Valorplates, an overhauled story experience, the ability to recover from knockdowns and revive downed players in co-op, and new inventory management tools such as Valorplate loadouts. Each of these are truly transformative additions that both longtime fans and newcomers alike will appreciate.

MMORPG: I am personally super excited for the revamped story and to see what lore has been added to the campaign, but do you have anything to say that could entice veteran players to hold off on the new Valorplate shards and other new end game content and instead go back through the new story?

Daniel: We’re excited too! There are several major additions to the campaign, but from a strictly lore-friendly perspective, there is now a greater presence of Macros, the main villain, who appears at key intervals throughout story missions to taunt Orin and build up to the final confrontation. Likewise, there is also a greater presence of Orin’s allies, including two fellow Valorian knights, Ravenna and Soras, who will accompany and fight alongside Orin during certain story moments as well as appear in the Sanctum between missions. These additions add a lot of new dialogue that further expands upon Godfall’s world and characters in an interesting and dynamic way.

MMORPG: With the Exalted Update marking the end of your mission to add all of the major community-requested features to Godfall, what’s in store next? Is the team going to take some time to assess feedback from the Steam and Xbox launch or are they already working on the next big update?

Daniel: We’ll continue to listen to the community and also ensure launch on the new platform goes smoothly. Beyond that, we’ll be happy to share future news when the time comes.