EverQuest II has just recently launched their 17th expansion entitled Reign of Shadows. We had the chance to sit down with Jenn Chan, the head of Darkpaw Games to ask some questions about the long awaited return of the Vah Shir race to the world of Norrath!

MMORPG: Hey Jenn, thanks for taking the time to sit down and talk with us. It’s been quite some time since I last played EverQuest II, but I thought we learned that Luclin exploded when the game launched? How did the Vah Shir prepare for the explosion, and what did they do to survive?

Jenn Chan, head of Darkpaw Games: The moon did indeed explode in the disastrous Shattering, but it was magically reassembled by a mighty draconic chronomancer during the culmination of Ages' End! No society on Luclin prepared for the destruction, nor did they know it was coming. Since its reassembling was “time” related, they’re back and struggling to understand what happened and what has changed on their home world of Luclin.

MMORPG: That’s an interesting way to retcon the story. I'm surprised to see the Vah Shir return, as we all thought the Kerrans from the islands of Odus were the closest we'd get to majestic cats! Was this a decision as the game evolved to include Luclin in the last update, or was this due to fan requests?

Jenn Chan: We always wanted to return to Luclin in EverQuest II, but were waiting for the right time. Last year we released our Blood of Luclin expansion. This gave our players the opportunity to travel to the light side of the moon and experience the stories of what happened on Luclin leading up to its destruction. They also found out what's happened since then and the struggles happening now, including the mysterious absence of Luclin, the Goddess of Shadow. We knew players would be interested in meeting up with the Vah Shir, considering they were introduced to EverQuest in the Shadows of Luclin expansion, but their city was on the dark side of Luclin. There was definitely enough content and story happening on the dark side for its own expansion. We were very excited about it all, so we decided to talk about the Vah Shir, but not introduce them until this expansion. This allowed us to do right by them and explore their grand city and give them the justice they deserve, which I feel shows in this expansion’s content and stories.

MMORPG: Sweet. They always felt like they had more of a story to tell than what we saw in EverQuest, so it’s nice to see a focus on their backstory. Can we assume that the Vah Shir are still going to remain with the appearances of descendants of Lions/Tigers/Panthers and other big cats?

Jenn Chan: Our version of the Vah Shir is a little different from the EverQuest version, we wanted our Vah Shir to be more seated with Lions, pride and family.

MMORPG: I can respect that, but I’m gonna miss seeing 400 people with weird variations of Panthro and the other non-Lion Thundercats. In EverQuest, the Vah Shir were a natively good race. Are these Vah Shir going to be neutral, evil, or good aligned?

Jenn Chan: They are good aligned, but you can choose one of the neutral classes that are not evil. They cannot be Brigands, Shadowknights or Necromancers.

MMORPG: Will Shar Vahl be returning as their starting area or will they inhabit a newly formed outpost for adventurers to explore? Maybe just Shadowhaven instead?

Jenn Chan: No, the Vah Shir will be using the current good aligned cities of Qeynos, New Halas, and Kelethin as starting areas.

MMORPG: Bummer, but that doesn’t rule out visiting Shar Vahl in some capacity during this expansion! Will we be seeing some of the iconic Vah Shir armor and shields make a return? Everyone loved the lion face shield in EverQuest.

Jenn Chan: Yes! You’ll see some of the iconic symbols from the original Shar Vahl and lots of lion-like idols, effigies and symbols that are very nostalgic of the Vah Shir in EverQuest. 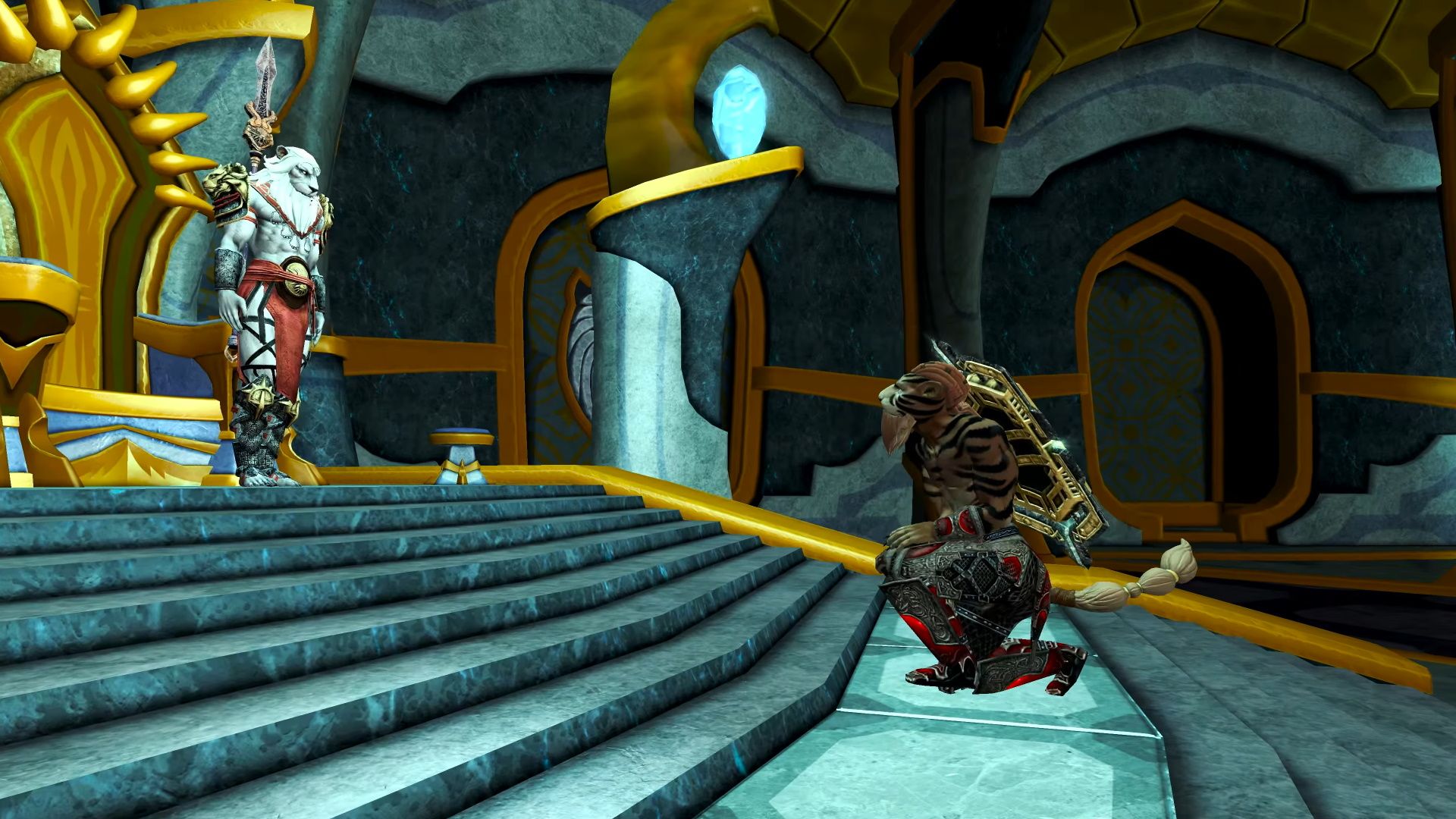 Jenn Chan: We added a lot of items that are nostalgic of EverQuest. We try to do nostalgia between the games in subtle ways, and we definitely tipped our caps here.

MMORPG: I can’t wait to see what you guys have come up with. What kind of racial traits will the Vah Shir have?

Jenn Chan: The Vah Shir run faster and have innate in-combat run speed. They also get some combat bonuses and a cool combat ability due to their cat-like nature.

MMORPG: Will the Vah Shir be available as soon as the expansion is live or will players have to do anything to unlock them? Unlocking the Frogloks was one of the most fun times I had back in the early EverQuest II days.

Jenn Chan: We opted to make them available to everyone at the beginning due to their nature of starting on Norrath. However, there are some exclusive questlines available to them if they complete the signature quest lines for Reign of Shadows and they are, of course, Vah Shir.

MMORPG: Awesome. One final question: Will the Vah Shir only be available to use on live servers or will their race be added to the TLE servers as well?

Jenn Chan: With the Vah Shir starting on Norrath, we’ve made the Vah Shir available to the players on Kaladim as well.

There you have it, a quick peek at what to expect in regards to the Vah Shir race finally making their long awaited debut in EverQuest II. Have any of you had the chance to pick up the expansion yet and if so, did you check out the Vah Shir yet? Let us know in the comments below!