When many outsiders think of EVE Online, I’m willing to bet that the first thing that comes to mind are the stories told of New Eden’s Capsuleers – the player pilots who write the history of the secondary universe. More often than not, when we in the media report an EVE story, it’s talking exclusively about the escapades of a player or Corporation doing something amazing.

But underneath the sandbox gameplay is the very fabric of New Eden – a story of Empires and, most recently Invasions. The framework of EVE Online is established in its lore – something that doesn’t get talked about enough when discussing the long-running MMORPG.

“EVE Online is an ever-evolving universe,” EVE’s Creative Director Bergur Finnbogason told me over a call last week. And he’s definitely not selling the MMORPG short. Story threads that connect players with the universe around them are being laid years in advance – and after 17 years in existence, EVE Online knows how to allow for its story seeds to be sown.

Players consistent theory craft, questioning every aspect of the EVE lore on Reddit, the EVE forums, various player run Discord channels. I remember being at EVE Amsterdam last year and sat around a table with some players as they discussed the Triglavian invasion in detail, questioning everything form the language to why the fact the alien race did everything in threes was significant.

Players in many games often question and come up with theories around where a story is going in an MMO. But with EVE Online, every action a player makes could have the potential to change not just their own gameplay at the time, but spiral into something major down the road.

“I joined CCP ten years ago,” Bergur continued, “and I joined the EVE Online team in 2014. The Drifters were actually one of the first things that I worked on in EVE. And my kind of biggest pet peeve when I started in EVE was the fact that I always felt that, you know, you had the game – the amazing EVE Online universe and interactions here. And then PvE and Missions – they kind of sat outside, it didn’t matter that some of the content existed outside – it didn’t matter that some of the content existed. You could kill the same rat again, again, again, and again and it didn’t affect the universe in meaningful ways. So I felt like those elements were missing form the story telling aspect of EVE.”

As such, going back to 2014, if you’ve been paying attention, you can start to see the seeds of the storyline that is still going on today. These story threads aren’t just reinforced by CCP themselves, but explored, dissected and discussed among the community as I alluded to previously. But even CCP get in on the action, such as The Scope, an in-game news cast that discusses major story beats and updates from the perspective of an in-game news team. 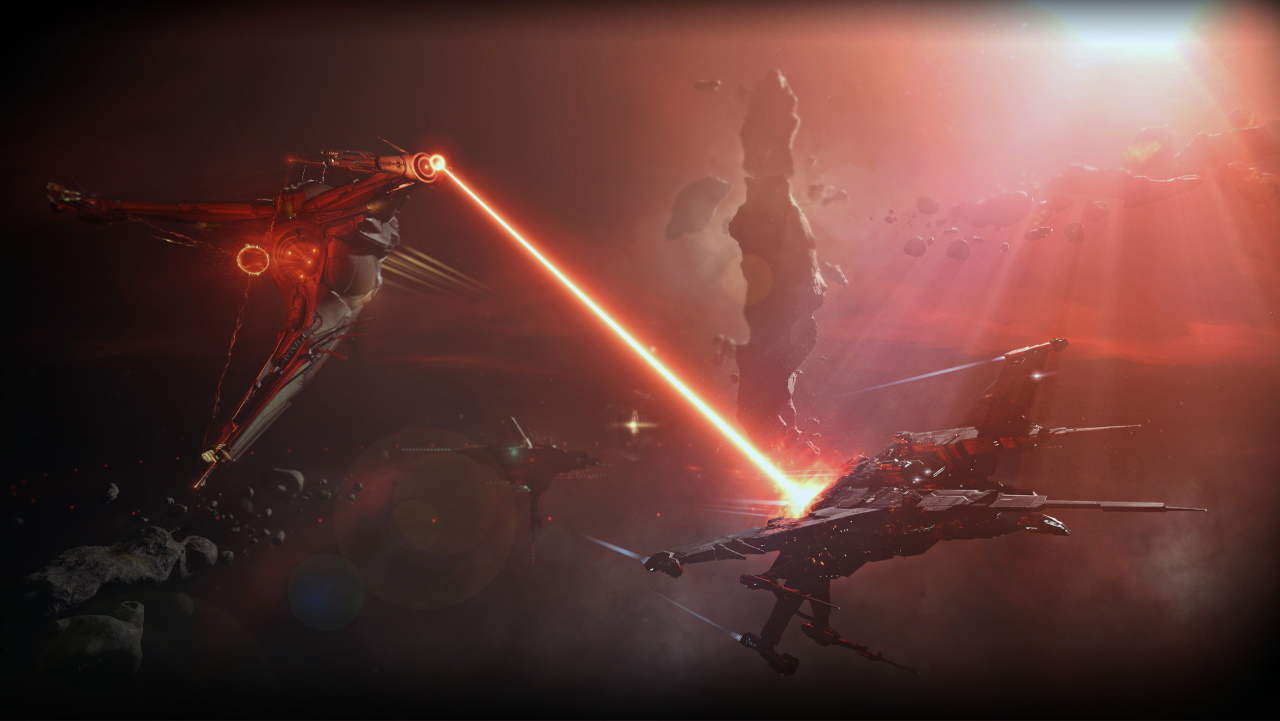 Some new players might be remiss in thinking this was player made, but infact it’s from CCP themselves. And it doesn’t just include hard details about the update or story beat it was designed to promote – keen eyed players might just see some of the conspiracy theories they’ve discussed also make an appearance – a direct line from the community discussion of the lore and the team that creates the game.

Currently, according to Bergur, there are “dozens and dozens and dozens of open ended storylines,” and while many things are touched on directly by CCP and the community, Bergur mentions that there are even more things that players haven’t noticed as well.

“At any given moment we always have a few storylines that are flowing around and we’re playing with – and in some cases, you know, we have the long game. And then all the cases we seed storylines and see how the community reacts to them. We have an estimate of where we want to say, but we allow the community to guide us through the ins and outs. So, you know, we pick upon tinfoil theories, we pick up on speculations. We have tools like The Scope that are completely in character, so they can take on some of tinfoil and run with them, break away from them or confirm them – stuff like that.”

EVE Online is one of the only games where in-game tinfoil theories are openly discussed -many games have community discussions, and sometimes conspiracy theories surrounding the game in general – and with CCP running with some of the theories the community makes and work them into their stores makes New Eden truly feel alive in my opinion. Knowing that some discussion I have in game or on a Reddit post could lead to a story thread down the road potentially only makes me want to discuss the universe CCP has created even more.

Some players take this to the next level, producing documents that even impress the dev team themselves. One group of players at the Arataka Research Consortium, a player-run endeavor dedicated to uncovering the mysteries of New Eden, produced a paper that actually made the dev team wonder whether or not it was the result of a leak.

Sæmundur  Hermannsson, brand manager at CCP, told me on the same call that it was the “single most impressive piece of work [he’d] ever seen from the community.” Personally, I thought it was dev-made when CCP shared it with me. Bergur, again, thought it might have been because of a leak.

“When I read it for the first time, my first thought was, ‘Oh shit, who leaked stuff?’ Second thought was like, ‘Wait – have they? Did they change the design without telling me?’”

Sæmi took it a step further and attributes the work from the Consortium to the dedication of EVE Online’s playerbase.

“It’s absolutely fantastic. I mean, EVE Online does not have the highest concurrent number of players of any game in the world, or whatever. But damn it do we have the most hardcore community in the world.”

With all the branching storylines and threads that can converge at any moment, or even alter based on something crazy a player does the team picks up on, new players might feel intimidated to jump in. Indeed, with the third chapter of the Invasion spinning up in New Eden, players might be discouraged as the Triglavian invasion might not be the easiest thing to do as a new player. Yet Sæmi reminds players that it’s, as Bergur said, a long game – something to work up towards as you start your adventure in New Eden.

“If they join today they can start preparing to be a part of it because this is not just dropping everything in like, one week and then it’s over with. This will be continued to go throughout the summer. Yet What is also important for players, a fraction of players engage directly with the Invasion every day. But a lot more players than engage with it enjoy the Invasion, that they’re part of this universe. Knowing that there is this evolving story and that I’m part of it, even though I’m not necessarily engaging directly – we that players love that. And the story of New Eden will continue to evolve, and that at some point they will be more directly involved with it because it’s more directly involved with their playstyle.”

Where the Trigalvian Invasion, and seemingly settlement of New Eden will take EVE Online into its third decade remains to be seen – it’s still unfolding before our eyes. But CCP is playing the long game, not just relying on their own storytellers, but also seeding from the community who create the major events that have shaped New Eden since 2003.

While killing a single pirate in EVE may not have overarching consequences to the great Empires of New Eden, the fact that at any moment a new event could be stumbled upon accidentally, or a piece of cargo could start a rabbit hole that leads to a new threat – the fact that at any given moment something you interact with could have consequences years down the line makes every interaction in EVE Online more meaningful.