The Elder Scrolls IV: Oblivion’s Cyrodiil has a special place in my heart as one of the few western RPG worlds I’ve explored extensively, despite my personal issues with open-world games. Some days I would just choose a destination and set out, exploring everything in my path, stopping to help NPCs as I came across them, or defending myself from those denizens of Tamriel that were insistent upon me having a very bad time.

So when The Elder Scrolls Online’s Cyrodiil was showcased at the launch of the MMO, I was naturally excited to jump back into that part of the world that meant a lot to me. The same feeling, only moreso as I consider its predecessor, The Elder Scrolls III: Morrowind to be the greatest in the series, flooded back to me when Vvardenfell was added to the MMO.

For many, last year’s Greymoor chapter satiated that thirst for the familiar, adding Western Skyrim – and Blackreach underneath it – to the game world. For me it was an achievement for sure, and walking around Solitude hundreds of years before The Elder Scrolls V was definitely a treat. However, when ZeniMax Online Studios unveiled Gates of Oblivion as its next year-long story with the Blackwood chapter at its center, something inside me got real excited again.

Going back to the realm of Oblivion – the Deadlands as they are called in ESO – is going to be a trip for those whose first ES game was Oblivion. It’s that challenge that ZeniMax sees itself tackling with seemingly every major content update it pushes out throughout the years: translating the familiar into something that can be seen as their own take on the world.

“Oblivion is kind of the thing that really started it all – I mean, Morrowind was the big thing, but Oblivion kind of cemented that for [Bethesda Game Studios] and for Elder Scrolls in general,” Elder Scrolls Online’s creative director Rich Lambert told MMORPG in an interview late last week.

Capturing that nostalgia is huge for many players of The Elder Scrolls Online. Many flocked to last year’s Greymoor for that reason, and it’s something the team understands will be there, however they are eager to put their spin on these regions and tell their own stories.

“Obviously the Deadlands is going to be super nostalgic for players, right? We’re putting our own spin on it as well in the fourth quarter, but it’s going to be nostalgic. Being able to go and explore Leyawiin is going to be nostalgic. But then as you progress through the zone, you get into places like Gideon, which hasn’t been seen since [The Elder Scrolls:] Arena. And a lot has changed since Arena has been out. So it’s been fun kind of doing what we did with Greymoor last year – there are some familiar places, but we’ve been able to put our won spin on a lot of places as well.”

Part of this comes down as well to the stories the team wants to tell. It would have been easy to just call this year’s chapter Oblivion, however the team is very specifically not going down that road, instead exploring Blackwood, a region of Cyrodiil that borders both Elsweyr and Black Marsh and is known for its swamplands. While the Oblivion-realm setting is obviously going to be a major draw, the team is clear it’s not setting out to “remake” these old titles, rather put their spin on these regions and tell interesting stories that fit right alongside the lore of The Elder Scrolls. Part of that comes down to how Oblivion is even mentioned in the story, with the team calling it the “Deadlands.”

“Over the years we’ve been slowly filling the map out. You watch from where we come from in 2014 to where we are now, we filled up huge portions of the map. And so when we get the opportunity to add to the map and build out the world and flesh it out even more, we jump on that. And it’s interesting that you call out Oblivion – it’s not being called Oblivion. We made that a very conscious decision. Because we didn’t want people to think, ‘Oh, they’re just remaking Oblivion,’ right? Same reason why we called Greymoor, Greymoor, and not Western Skyrim. We don’t want people to go in going, ‘Oh, they’re just remaking it.” It’s our take on the area and we wanted to have those elements of nostalgia, but being able to show that we can do our own thing as well.”

As such, a new region isn’t the only thing coming this year for ESO fans, as it was announced at the showcase that Companions are coming to the MMORPG. These companions act as party members you can deck out and set up as either Tank, DPS or Healer. This feature is really meant for those solo players who run around the world experiencing The Elder Scrolls Online as if it were just another numbered entry in the single player franchise. While more and more MMOs are catering to single player content, this is engrained in ESO’s DNA. Companions are just another part of that evolution to give players more ways to play – and more stories to explore as well.

One of the major reveals In the wake of the announcement showcase was the ability to, eventually, romance these companions. Rich elaborated a bit further on this with us in our interview, stating the desire to “get it right” before branching out with more features and companions as they move on.

One thing Rich noted was that every companion will have their own “likes and dislikes.” As you work with your companion and progress, you’ll unlock dialogue choices which can, in turn unlock additional quests. These companions are more than just a simple body to help you through a quest or delve, rather they are stories to be told unto themselves. Over time, however, this sytem could be fleshed out to include more options and stories, such as the ability to romance your companion.

“Every companion has their own unique set of likes and dislikes,” Lambert said in our interview. “As you progress through that rapport system, you unlock different dialogue choices, different quests that are associated with those companions. So the first two, Bastion and Mary, have a little bit of a story arc, a personal story arc about their background and kind of who they are and what they are about. And So you unlock that as you progress through. And then, what that system allows us to do in the future, we can add to it, we can add more things to it. And that’s probably where the romancing side of things is going to come in. But for now that’s not going to be a part of launch., because we want to focus in on the core mechanics and the core system and getting that right.”

Companions were really envisioned to give solo players the ability to run content with a companion, or two friends and their companions. It’ll be interesting too to see the kind of theorycrafting and stories that come out of the new feature, especially as new content and companions are added to them over the years.

"Since our initial announce in 2012, the online players are like, 'Yes, I get to play my favorite game with my friends.' And the more traditional Elder Scrolls player was like, 'No, no, no, no - give me the next solo play experience.' And so we had to find that kind of balance. And i think, over the years, we've gotten a lot better at finding that balance. The game, you can play completely solo, if oyu want. You don't have to interact with another player if you don't want to. You can go through all the stories. The dungeons are usually out of the reach of most of the hardcore solo folks. But all the core stories are there and you can play them and bump into players along the way but you don't have to interact with them." 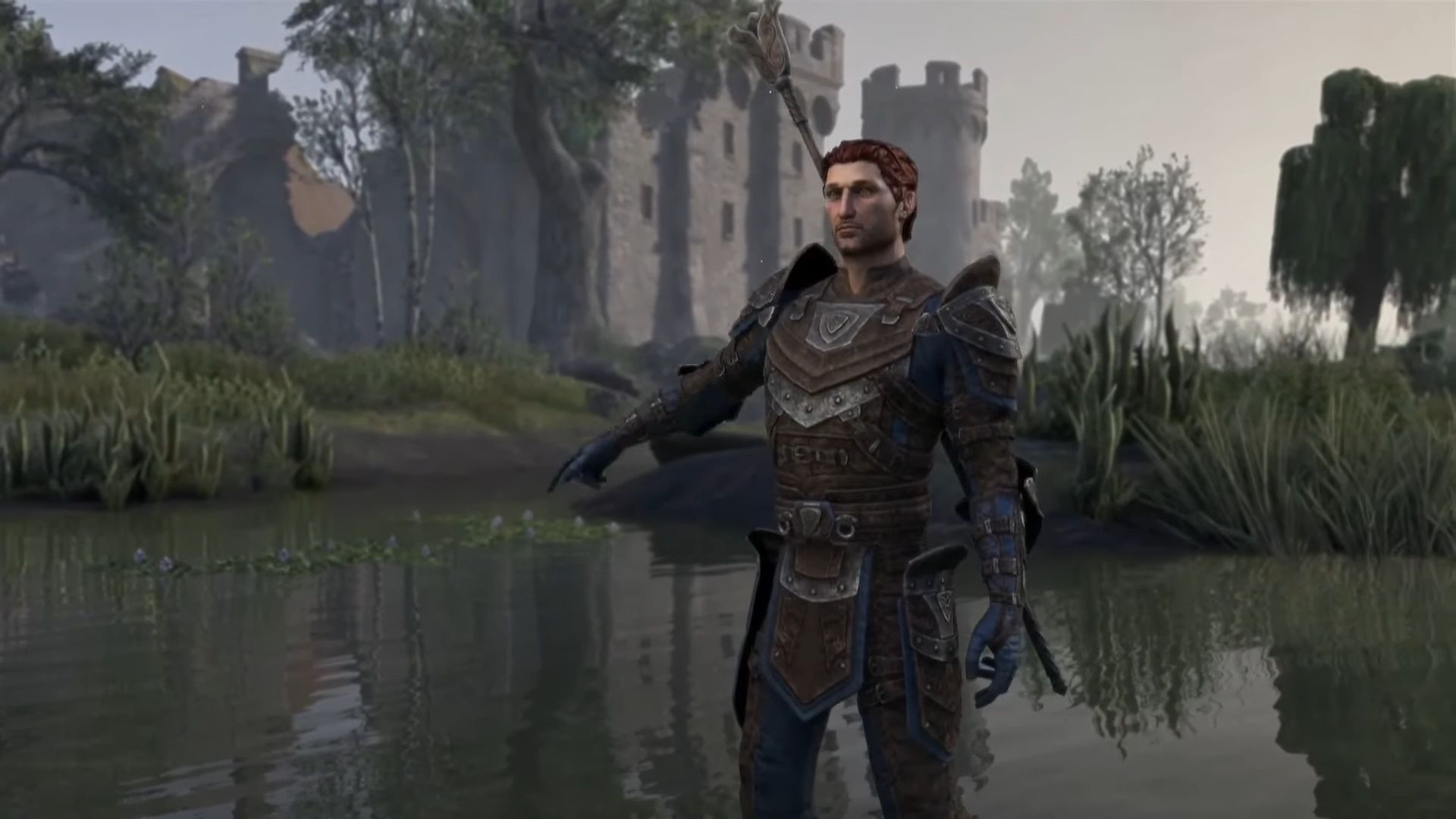 Balancing multiplayer and solo activities in ESO is par for the course for ZeniMax, and the MMO has certainly gotten better at balancing this for players over the years. Since its reveal in 2012, it felt at odds with those two identities, but over time the team behind the MMORPG has found its groove, especially as they’ve rolled out these yearly stories and chapter releases. However, that then begs the question: is it becoming too formulaic? For some, it might be approaching that territory, and the team is well aware of the feedback.

“I think you’re always gonna see that kind of feedback in games – especially games that have been around for a long time, that release content at a regular cadence. ‘Oh I know what’s coming.’ And then they go in and play it and they’re like, ‘Holy shit I didn’t actually know what was coming. This is way different than I thought.’ I think there is a bit of that in there, but it’s definitely something that we internally take a look at and try to be as mindful of as possible.”

Part of the ways the team can combat this is by the features they are releasing with the MMO every year – and ensuring they feel different enough to not fall into that “formulaic” trap. Antiquities with last year’s Greymoor release helped contribute to that, giving players an entirely new way to enjoy ESO. Companions is just another extension of that desire and push to give players more ways to play the MMO, instead of simply adding a new class, like Elsweyr’s Necromancer a few years back.

“For us, Companions was a lot more interesting and a lot more compelling than a new class. And so, you know, that’s what we’re focused on. You know, same thing with Antiquities. I really love the idea of exploring how to add new alternate activities to the game. That’s one of the ways that we try to solve the formulaic issue that you brought up, right? Where if we do things and we mix things up a little bit differently, or we give you an avenue to play ESO a completely different way, that’s really good. And that changes kind of how players play the game and what they can expect.”