When The Burning Crusade Classic was announced, I wasn’t surprised; I’d been expecting that since the BlizzConline announcement. Aside from excitement, my first thought was, “ok, how are they going to do this?”. Last Saturday, I had the opportunity to interview the Executive Producer of World of Warcraft, John Hight, and Technical Lead for World of Warcraft Classic, Brian Birmingham, to delve deeper into how all of this will work and what players can expect when it launches later this year.

Over the years, there have been many stories about how Blizzard couldn’t have set Classic to an earlier patch than 1.12 because they had “lost” the original data. Birmingham wasted no time putting that rumor to bed, saying:

“I wanna correct a popular misconception that we didn’t have the older data than 1.12; 1.12 was the patch we chose because we felt that it was the most complete and balanced version of the game. There were some very early versions, like 1.0 I think we don’t have that version, but earlier on snapshots like 1.5, 1.7, we have snapshots of various points of time that we do have and can go back to and look at; and we used those to look at things like the progressive changes to the drop tables from the various creatures. Which we found changed significantly in 1.10, and we had the 1.9 version of those in the early version of Classic, and we switched to the 1.10 version of those in phase 5… It was more of a matter of it was misplaced around the office. We had an archives team who knew where all that stuff was, it was more of a matter of knowing what to ask them for so we could resurrect it… so we did have it, it wasn’t a matter of going to external people to get it. It was more, within the company which organization was managing that, which IT group had the back-ups.”

Another point Birmingham during the interview is that one of the more significant challenges with bringing Classic back was meshing the old code with the modern infrastructure to create a more stable and all-around better experience for players than there was in original Vanilla. Talk to any Vanilla player, and they can tell you all kinds of stories about how unstable everything was back then, so bringing things to modern infrastructure was a good call. However, it isn’t a trivial task, and this same task returned when adding in the 2.43 data for BC Classic as well. 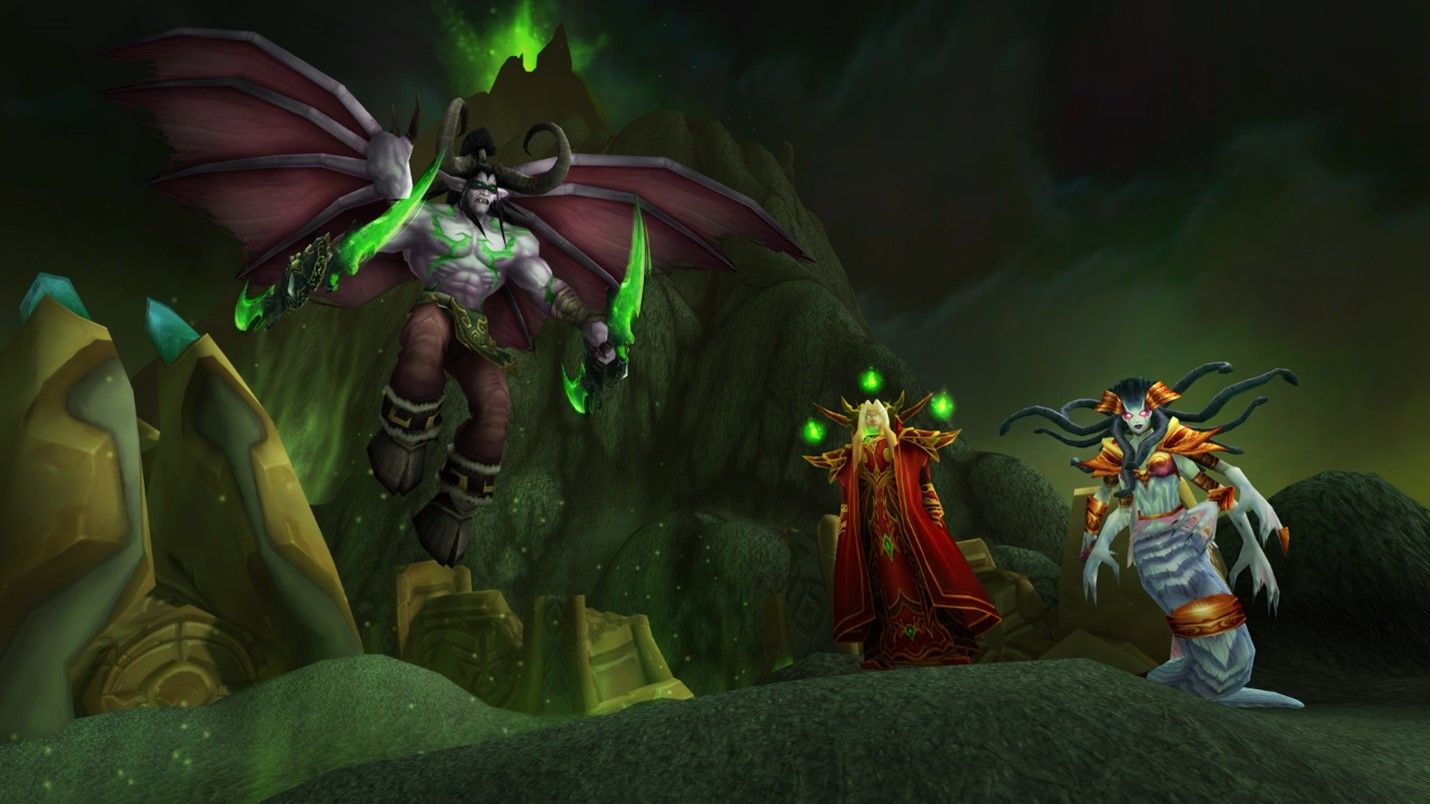 One question some players had after watching the BlizzConline coverage was why they are going with patch 2.43 as the starting point for Burning Crusade Classic. Birmingham gave an interesting explanation that during that patch, they introduced some streamlining of the leveling process. It was important to the team to include that in the beginning so players who decide to roll the new races would have the opportunity to level and go through the Dark Portal with their friends. Which, honestly, is fantastic. Trying to level one of the new races at the original TBC launch was a huge pain, especially for anyone who wanted to be in the first wave of raiding. Making this slight compromise will help a lot of players to be able to play what they want to play. Of course, that doesn’t mean leveling will suddenly be super-fast and easy. It’ll be just a bit quicker than it is currently in Classic.

One area of some friction among Classic players has been between the players who wanted no changes and others who were good with some changes. For the most part, Blizzard has managed to walk a pretty fine line of what they have changed to give a better experience but still maintain the essence of what made Vanilla so iconic. They are pushing this envelope a bit with BC Classic by offering the option for a boost. Hight explained that one of the reasons they wanted to provide this was for players who, for whatever reason, already feel behind. They didn’t want BC Classic to be something that makes players feel even further behind and despair of being able to catch up. So, they added the boost to ease that tension a bit and to make the experience better for everyone. 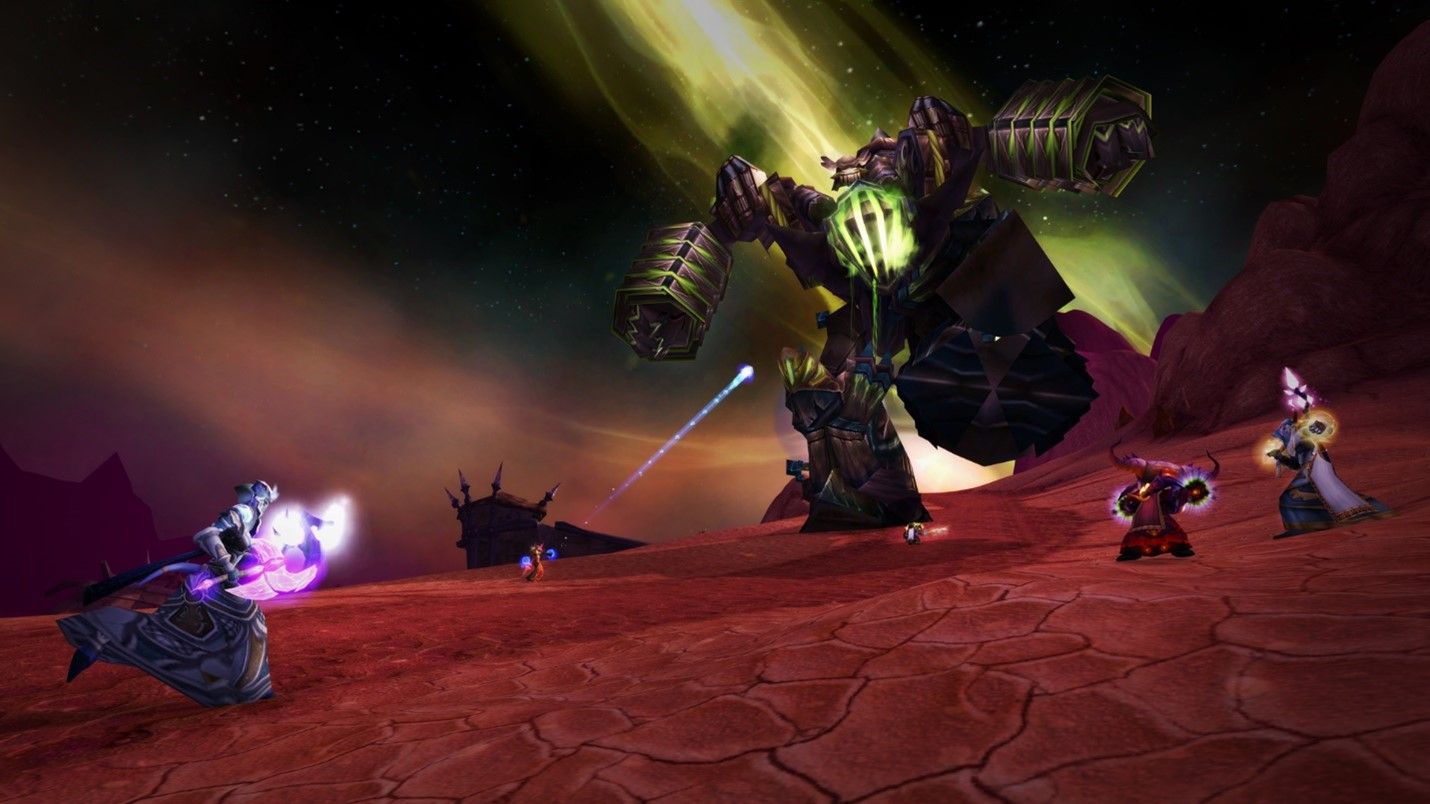 On the topic of what sorts of changes would be made or not made with the coming of BC Classic, I asked if some features like cross-realm grouping or using crafting mats directly from your bank could be added. Unfortunately, Birmingham was quick to say using mats from your bank is precisely an example they would give of the types of changes they wouldn’t make. It is convenient, but it also removes a bit of the friction inherent to the Classic experience, and they want to preserve that. He also explained that although they don’t want to allow cross-realm grouping, they are aware that people who choose to remain in Classic might need some help to find groups because they expect that population will likely be much lower than the population of players who move to BC Classic. He didn’t know what they plan to do but wanted to let us know they know it is a potential problem.

One interesting change Birmingham pointed out was although attunements were removed with patch 2.43, that doesn’t mean Burning Crusade Classic will launch without the attunements. We will have to go through all the original attunements just as we did when TBC originally launched. As someone who generally doesn’t like attunements because it’s a logistical nightmare for guild management, I’m happy with this change. Sure some of the attunements could be frustrating, but I also remember often enjoying that process in TBC. 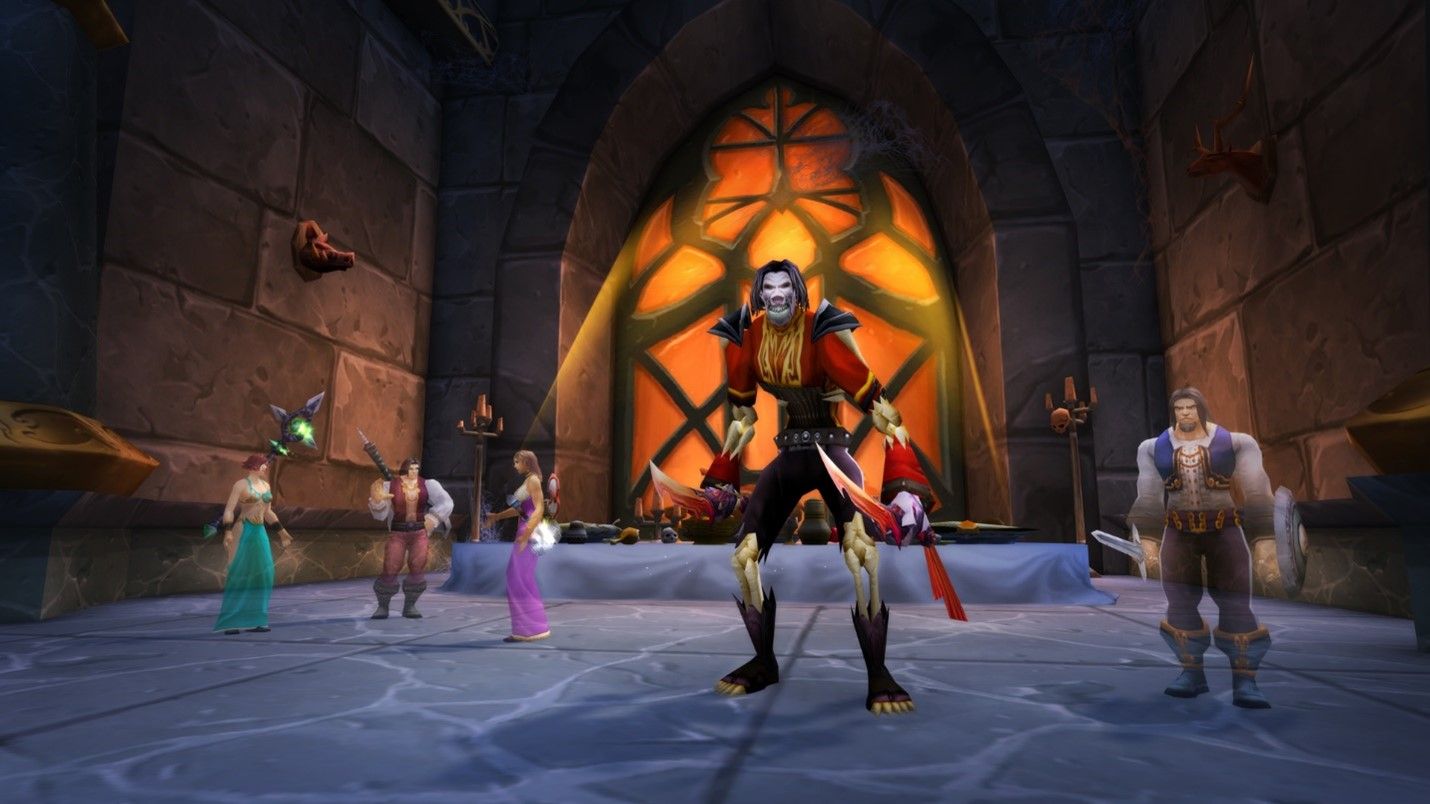 One of the big questions about how Burning Crusade would work if they did bring it back was if all players would be forced into it or if there would be a choice. Thankfully Blizzard is leaving it in the hands of the players who can choose either staying in Classic, moving on to Burning Crusade, or both. Although I am happy they are leaving it for players to choose themselves, there seemed to be a real potential to fracture guilds, and I was concerned about what the experience on that end would be. Birmingham clarified that the guild entities would be carried into Burning Crusade Classic to recreate the authentic transition to TBC that players remember.

However, Birmingham also clarified that they currently don’t think they will be able to carry over guilds when they do the cloning process for players who want to stay in Classic. Friends lists will be preserved, and everyone who was on the same realm previously should still be together, so they can reform if that’s what they want to do. Honestly, I am a bit disappointed in this answer because it sounds like there is some real potential to fracture guilds in this transition. If most of a guild decides to move forward to BC Classic, but a few stay in Classic, that guild will effectively be over on the Classic server. Although, if they did this as Retail WoW currently works when some members buy expansions and some don’t, it wouldn’t preserve the Classic experience for players either because all the systems changes would still go into effect.

Another good choice Blizzard made with this change is players will have the ability to change their minds about where they are playing. Birmingham clarified how this would work a bit by saying there will be a period of time where players can decide to go back and clone themselves on whatever branch they didn’t initially choose. However, the clone will be based on the state of your character when they implement BC Classic. For example, if I log in and choose to stay in Classic, I can do that and continue playing. Then I would have the option to later clone over my character to BC Classic, but it wouldn’t be my character as it is at that point; it’d be the version of my character that existed when I originally chose to stay in Classic. The same holds true for players who go on to BC Classic but decide to return to Classic as well. They don’t know what the exact timeframe players will have to change their minds will be yet, but they will be sure to let everyone know when they set the cutoff. 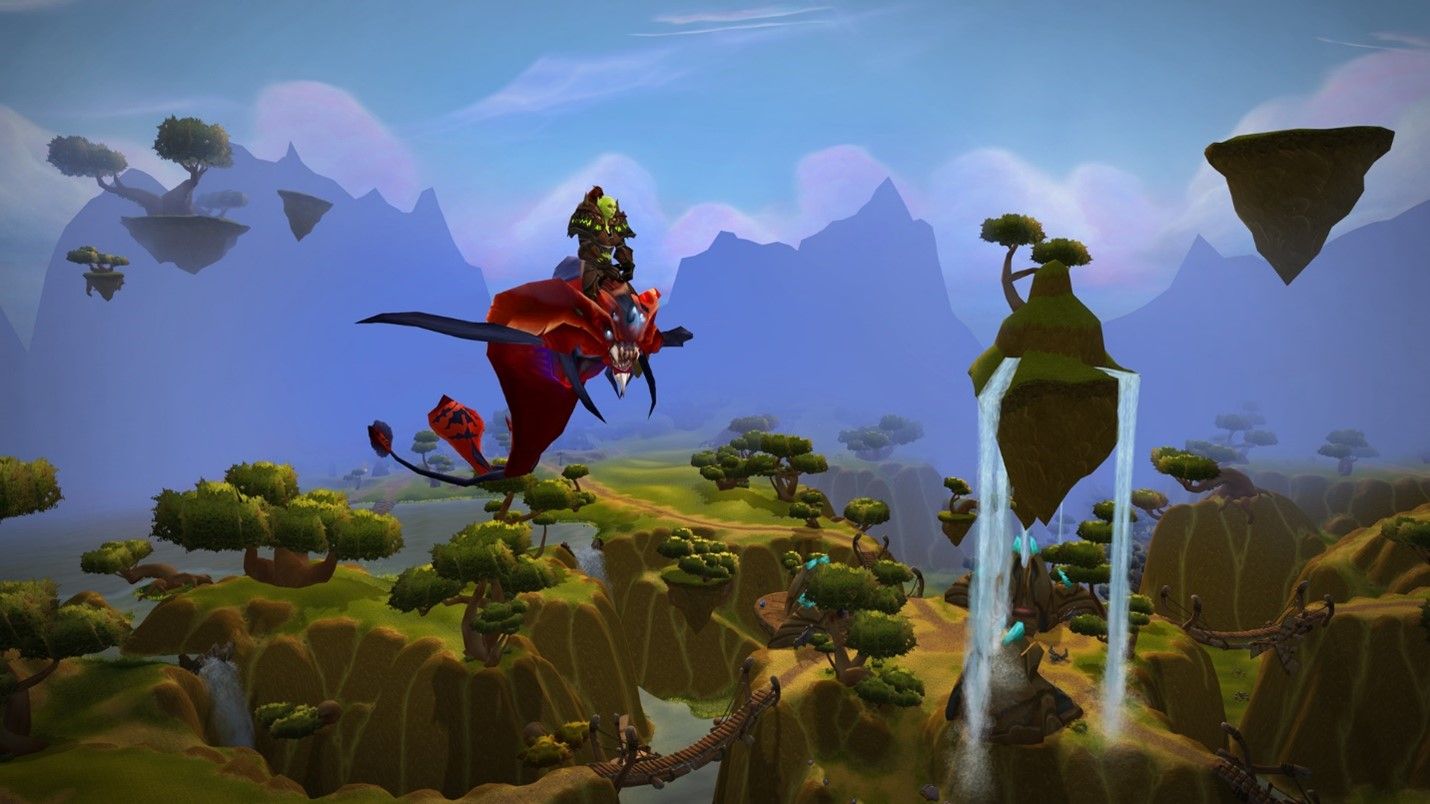 One obvious question is if WoW Classic will just go on through all of the expansions and if there are any plans to pause it at a certain point so it doesn’t catch-up to Retail WoW. Hight was quick to say that they aren’t ready to commit to anything on that front, which makes a lot of sense. One of the prevailing reasons given by players for wanting Vanilla back was because they were unhappy with some of the streamlining and reducing of requirements that had been brought into WoW through the various expansions. Burning Crusade Classic is coming because they had significant amounts of people asking for it, and if the Classic players also want future expansions, they can look at doing those too.

That’s pretty much everything we covered in the interview. Are you excited about the expansion? Anyone thinking they are going to stay in Classic and not move to BC Classic?