During the Opening Ceremony for BlizzConline, we had our first look at the new Rogue class revealed for Diablo IV. In addition, there was a ton of information shown in the Diablo IV: What's Next Panel, and I had the opportunity to participate in an interview with Lead Systems Designer, Joseph Piepiora, and Lead Animator, Careena Kingdom. Let's go ahead and dive into all the new Diablo IV information, which was dropped on Friday.

The Rogue may be a callback to the original Diablo, but it isn't just limited to that game's skills and play style. They are pulling ideas from the various dex classes they have had over the years, making them fit together well, and creating an incredibly versatile class that can accommodate many different types of playstyles. During the interview Piepiora was quick to point out two pull-ins from other dex classes are some of the Amazon weapons, and some obvious Assassin abilities are being used. Since the Rogue is such an encompassing archetype, they felt they could offer a lot more variety in a tidy package than if they had gone with one of the more narrowly defined dex classes.

Watching the Rogue reveal it seemed like switching between ranged and melee was something the class could do on the fly depending on the situation.  I made sure to ask Kingdom about this, and she confirmed that even though players can specialize in ranged or melee you will always have the option to switch between the two in combat. She also went on to explain that one of the main aspects of the Rogue they have focused on is making attacks fluid, so no matter how the Rogue is attacking, it looks smooth and as if someone with a high dexterity is fighting. With this concept, the Rogue's dodge is a spin move instead of a straight dodge the other classes have.

Imbues were briefly covered during the What's Next panel; basically, the Rogue can apply various effects to her weapons. Examples listed were Frost, Poison, and Acid. During the interview, Kingdom brought up the interesting point that these imbue effects can stack with the effects other classes put out. For example, if a Rogue and Sorceress are fighting together and are both using frost, they will freeze enemies faster than they would on their own. This allows for a lot of exciting synergy between the classes and could potentially affect some builds, especially for players who generally play with friends.

The What's Next panel also covered the fact Rogues will have three different Rogue related guilds to choose between and will give them unique class quests. As someone who loves individual story quests and lore for different classes, I was curious if the other classes would have something similar. When this was brought up as an interview question, Piepiora was quick to point out other classes will have access to unique quests/storylines, but they won't follow the same pattern as the Rogue. For example, every class won't have three factions to choose to help. They want to maintain the unique feel for each class and don't want even the quest experience to feel repetitive when switching between classes. 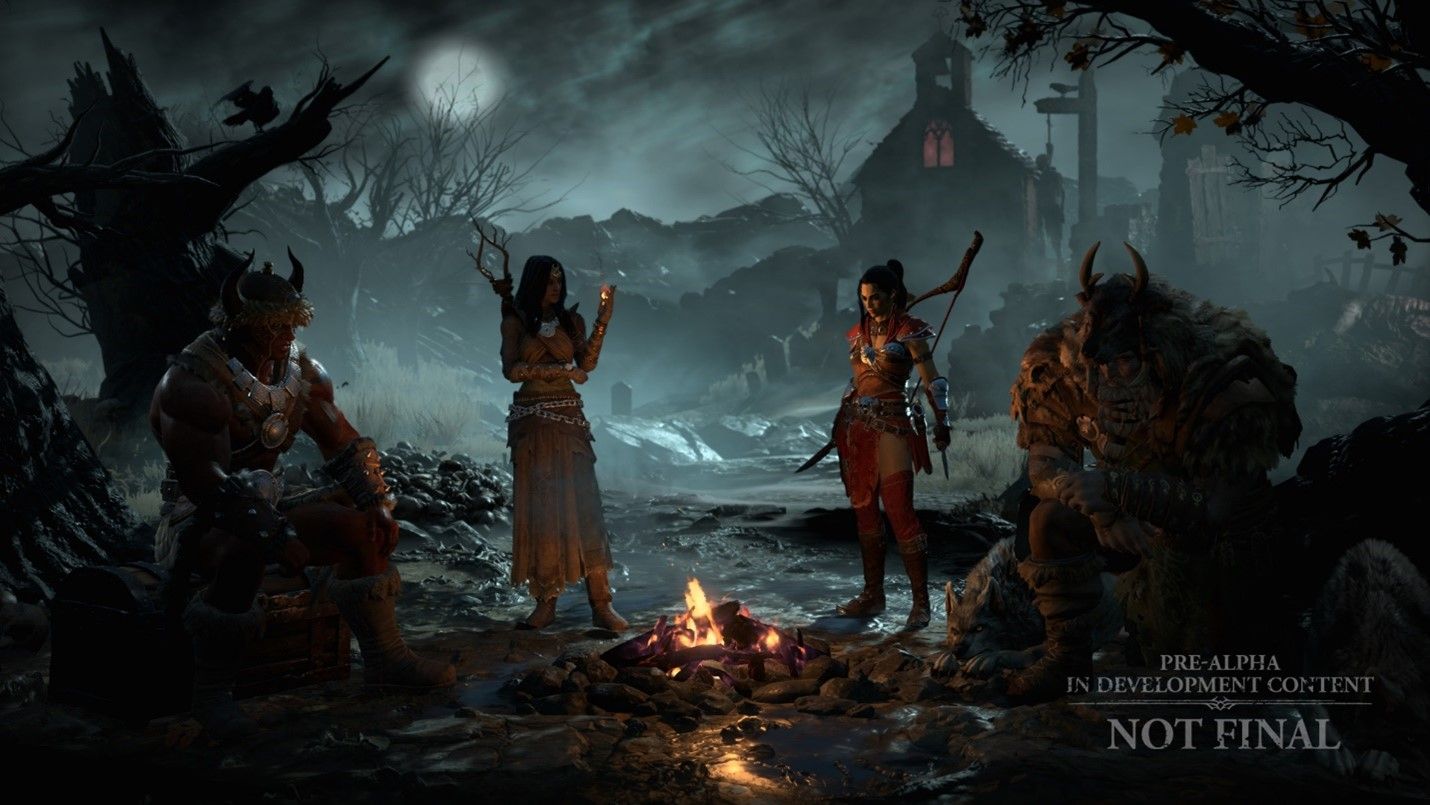 The world of Diablo IV is a much more lonely place than Diablo III was. This may seem to not square well with an open world where players can run into each other both in the wilds and towns. When asked about this apparent dichotomy Piepiora explained that running into other players out in the world won't be like running into other players in a game like World of Warcraft. It'll happen for sure, but it'll be something out of the norm when it does happen. In towns, of course, there will be a higher density of players, but that makes sense. It's a tricky balancing act, but it is one they are committed to getting right.

In keeping with the theme of the population is relatively sparse, all story areas (critical path) and dungeons are instanced. As such, only one player or one group of players will be in these areas. This will help preserve the singleplayer aspects of Diablo IV in a meaningful way without taking away the ability of players who want to group up to do so. I tend towards more solo play in Diablo games, so this is ideal for me. If I happen to want to play with friends, I can, but when I'm off doing things independently, I shouldn't see many other players outside of towns.

Camps are one area that falls into both categories. Piepiora pointed out that when a player first finds a camp, the site will be a "stronghold of evil," which will need to be cleared out. Once the player fixes whatever the issue is there, they can reclaim the camp, and it will become a public hub where other players and NPCs will return to. Initially, during the What's Next panel, I was concerned camps would either be something where people who get there first would do an event, and no one else would ever see it, or the event to retake the camp would be reoccurring. Both options seemed terrible. However, from what both Piepiora and Kingdom said during the interview, it sounds like they are instanced for each player until that player completes the clearing event. 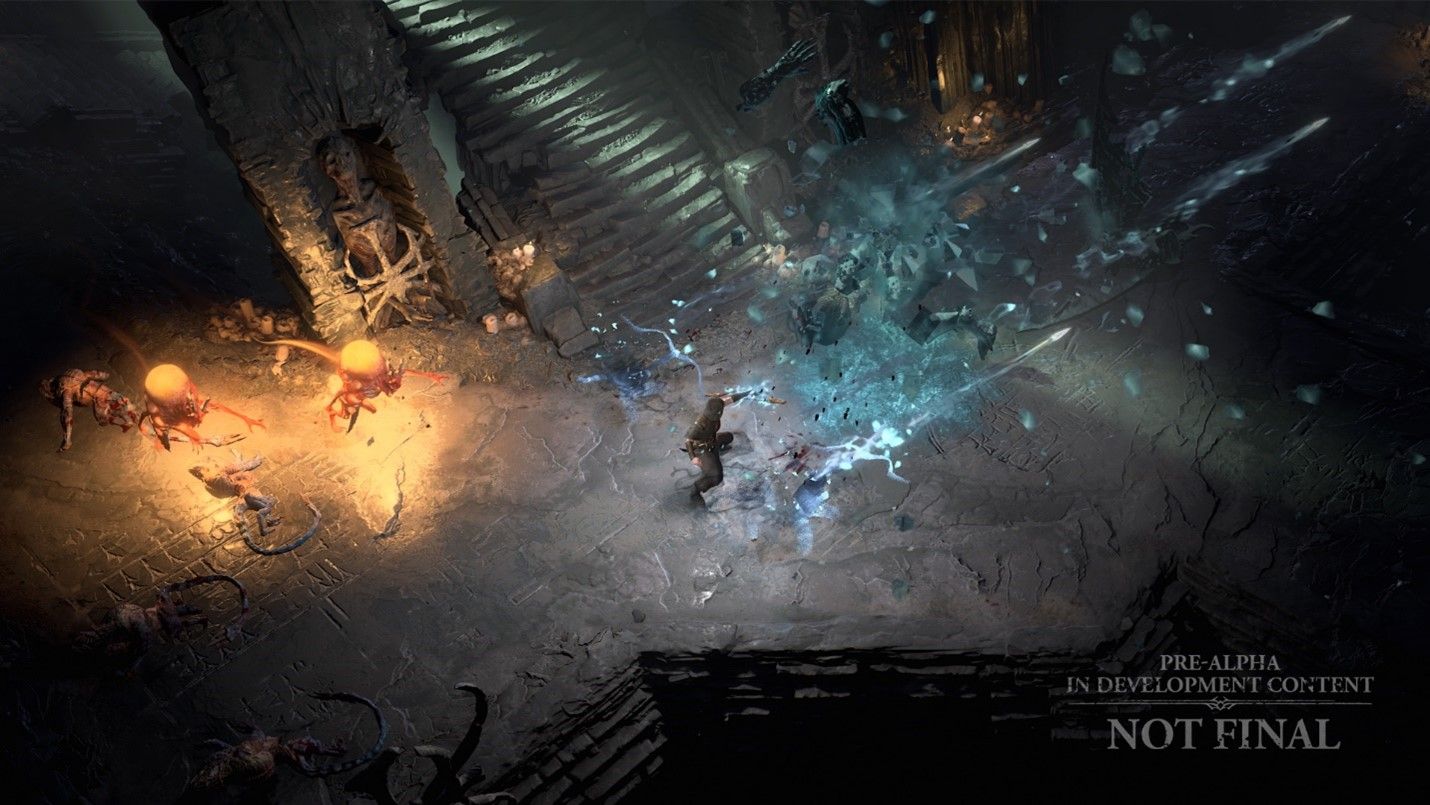 The open-world PvP areas are called Fields of Hatred. Everyone can collect shards of hatred, and you can opt into PvP by making yourself hostile, which flags you as being attackable by anyone. Players who only want to do PvE can absolutely head to these areas as well and only fight monsters and not participate in PvP and still collect the Shards of Hatred currency. Of course, one issue with this type of setup sometimes players will find ways to force other players to become PvP flagged, so I asked them about this. Piepiora clearly stated that it is not intended for any player to force another player to become hostile and therefore attackable. So, no hostile players wandering into your AoE and then ganking you unaware. If this does happen, it would be a bug and would need to be fixed quickly.

Before Shards of Hatred can be spent, they need to be purified, and to do this, a player will have to flag as hostile. This allows other players to attack you and try to steal your shards. Once the shards are purified, there is no way another player can steal them from you. So, although you can collect them without engaging in PvP before you can spend them, you will have to make yourself vulnerable to attack. Since these shards are the PvP currency, it only makes sense you'd need to take the risk of PvP at some point during collection. 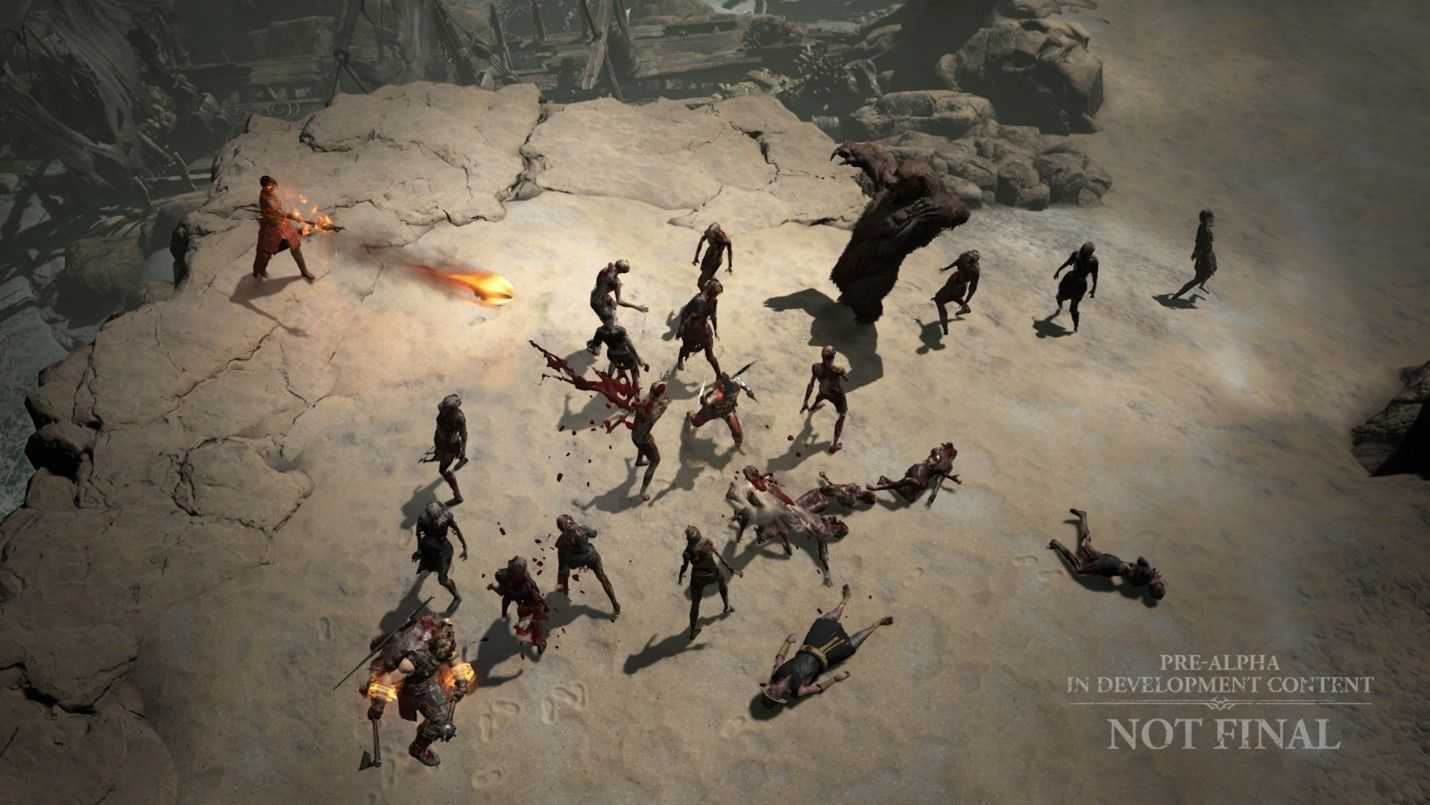 I like this because I could band together with other friends to protect each other while purifying our shards, leading to some exciting gameplay. Of course, there's also always the chance of betrayal as well. During the interview Piepiora also mentioned that Shards of Hatred aren't involved with progression in Diablo IV at all. They can only be used for cosmetics or items which would be classified as trophies. Hopefully, this should prevent players from feeling like they have to partake in PvP if they don't want to.

Also discussed in the What's Next panel, ears are returning as a trophy from PvP. Piepiora was emphatic, in the interview, regarding their desire to keep ears from being a currency and instead remain as a token or trophy from the players you've killed. Ears will also have the name of the player you took the ear from to make it even more meaningful. One thing I'd like to see, and to be clear, there was no mention of this during the interview or panel, is some way to organize and display the ears you've collected. It'd be a cool way of displaying your proclivity in PvP other than the normal fancy cosmetics generally offered for this type of thing. 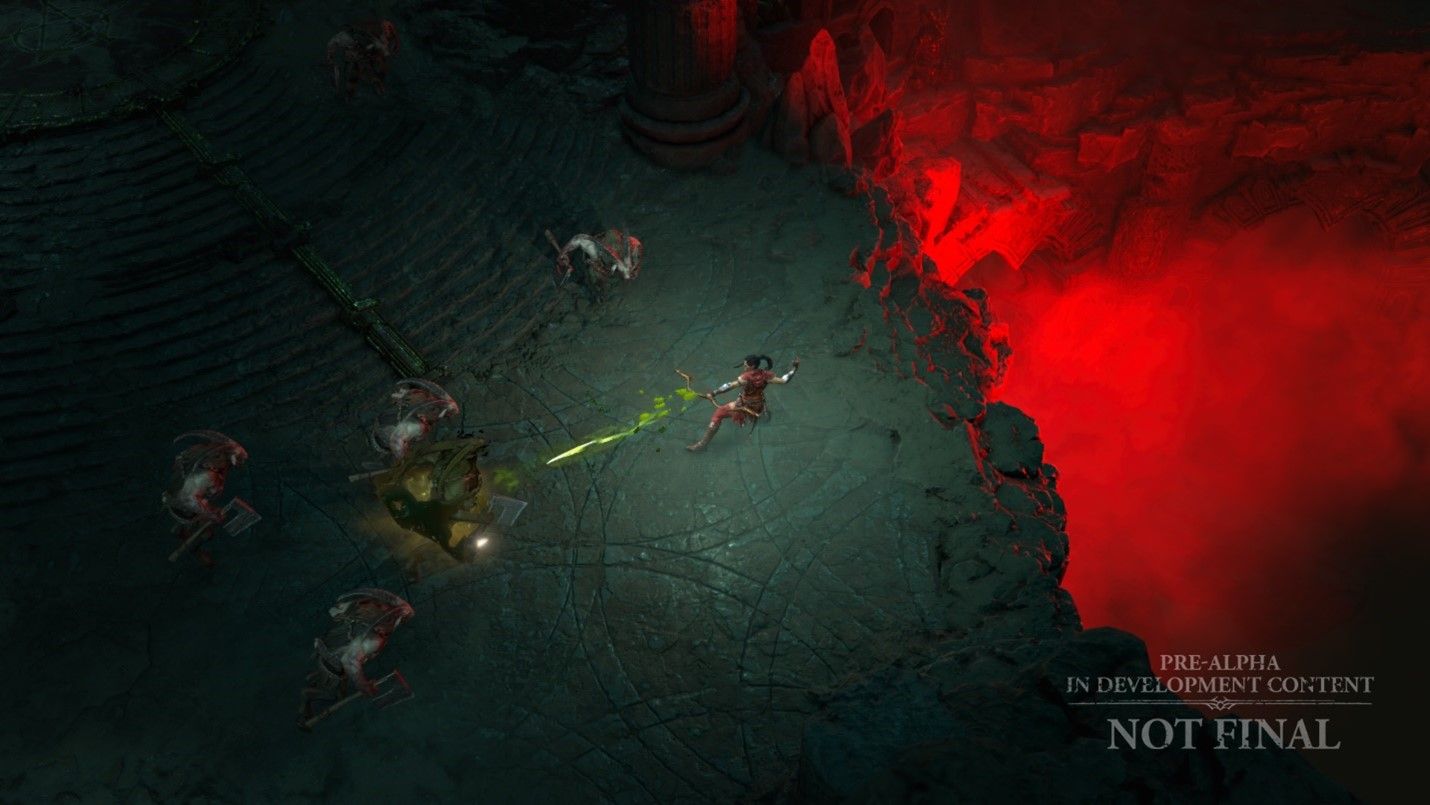 Seasons have been a huge man stay of Diablo III and keeping that game going over the years. When asked about seasons in Diablo IV, Piepiora was adamant that they will be making an appearance though they probably won't follow the exact same format as Diablo III. However, Blizzard isn't ready to go into any real details about how seasons will work yet.

They also weren't quite prepared to talk about the endgame experience. However, Piepiora did mention that they want to make sure there are multiple options for players at endgame, so everyone won't feel like they have to do any one thing, which would be a significant step forward. Of course there’s still a lot we don’t know yet, but we are also still quite a ways away from launch. It’ll be interesting to see what the next few Quarterly Updates will reveal. What are you looking forward to with Diablo IV? Anything particularly concerning to you so far?