It has been several months since we’ve had a deep look into the state of upcoming sandbox MMORPG Ember Sword. When last I graced the deserts and forests of Thanabus was during a very limited technical test that was cut short after developer Bright Star Studios believed they had all of the information they needed. This week, the team has unveiled some new, updated gameplay, and I was able to sit down with Mo Fadl, Chief Publishing Officer of Bright Star, and ask him a few questions on how the development has been going.

While it has been a few minutes since I was able to take a deep look into the progress of Ember Sword, it has been quite easy to keep track of what the team has been up to with our weekly updates in our Indie MMO Spotlight column. It is obvious that Bright Star Studios has kept their growing fanbase engaged with their Work in Progress Wednesday posts, along with consistent community events. When I sat down with Chief Publishing Officer (CPO) Mo Fadl this week, it was important that I get a clear picture of where the game was at, and what Mo and the team has been working on.

Mo started his gaming journey at Lahza Games, and later moved to some of the most popular publishers in the online gaming industry, such as Blizzard, NCSoft and Riot Games. Earlier this year Mo met with the Bright Star Team and was impressed with what they’ve been working on, which ultimately enticed him to join the project:

“I told them, I come from the game industry, from publishing mainly, I don’t have a lot of knowledge about Crypto. (I have a lot) about blockchain technology, and what it could be in regards if it’s used right, but the crypto aspect is something that has been misused in many regards of today’s society. You know, the ‘Crypto Scheme’. The blockchain technology itself, a beauty!

The implications of what the cloud-based engine could do surprised Mo. Through the new engine, the team is able to push live updates, across the entirety of the live service game at a moment’s notice, be accessible to anyone through a web browser, and launch their game with no updates and no major hardware requirements. During out conversation, Mo commented that, despite Ember Sword utilizing blockchain, it’s not actually a blockchain game. That was quite interesting to hear, especially with the way that NFT’s, crypto tokens, and blockchain-game economies have struggled throughout 2022. Here’s what Mo had to say regarding the way the market has changed, and how that affects Ember Sword:

“We’re not a blockchain game. We make an amazing game. We’re a game company. We use, for the economy, a new technology, which allows us to build really great experiences for anyone who is interested.

On Guild Wars 2, or with Riot, we would have never talked about how the economy in the small parts where we monetize, are a core element of the game, because it’s not. It’s the gameplay experience, progression, the depth, the connection, the experience you create, how do we put together the actual game. So the core game (for Ember Sword) didn’t change, nothing changed there because the team has always said ‘We want to make an amazing game, with blockchain being used correctly.

In our previous, extensive coverage of Ember Sword we spoke with Executive Producer Loren Roosendaal about how cosmetics will be the primary driver for the in game NFT economy. Mo spoke candidly about how the team is keeping with that philosophy, even if there may not be as big of an emphasis on it as more game features are revealed. “We most likely will not focus on it anymore, and say ‘This is a crypto game’ – No – because why would we?” Mo said. “Nobody cares if they have to buy Riot Points, World of Tanks Gold, or ArenaNet Gems. Nobody cared about this, so let’s focus on the players, how they connect, and how they have a good time.” He continued. “Then if they want to use cosmetics or buy cosmetics or trade cosmetics, there is an opportunity for us to make revenue. For them to make revenue. To share it.” He concluded. 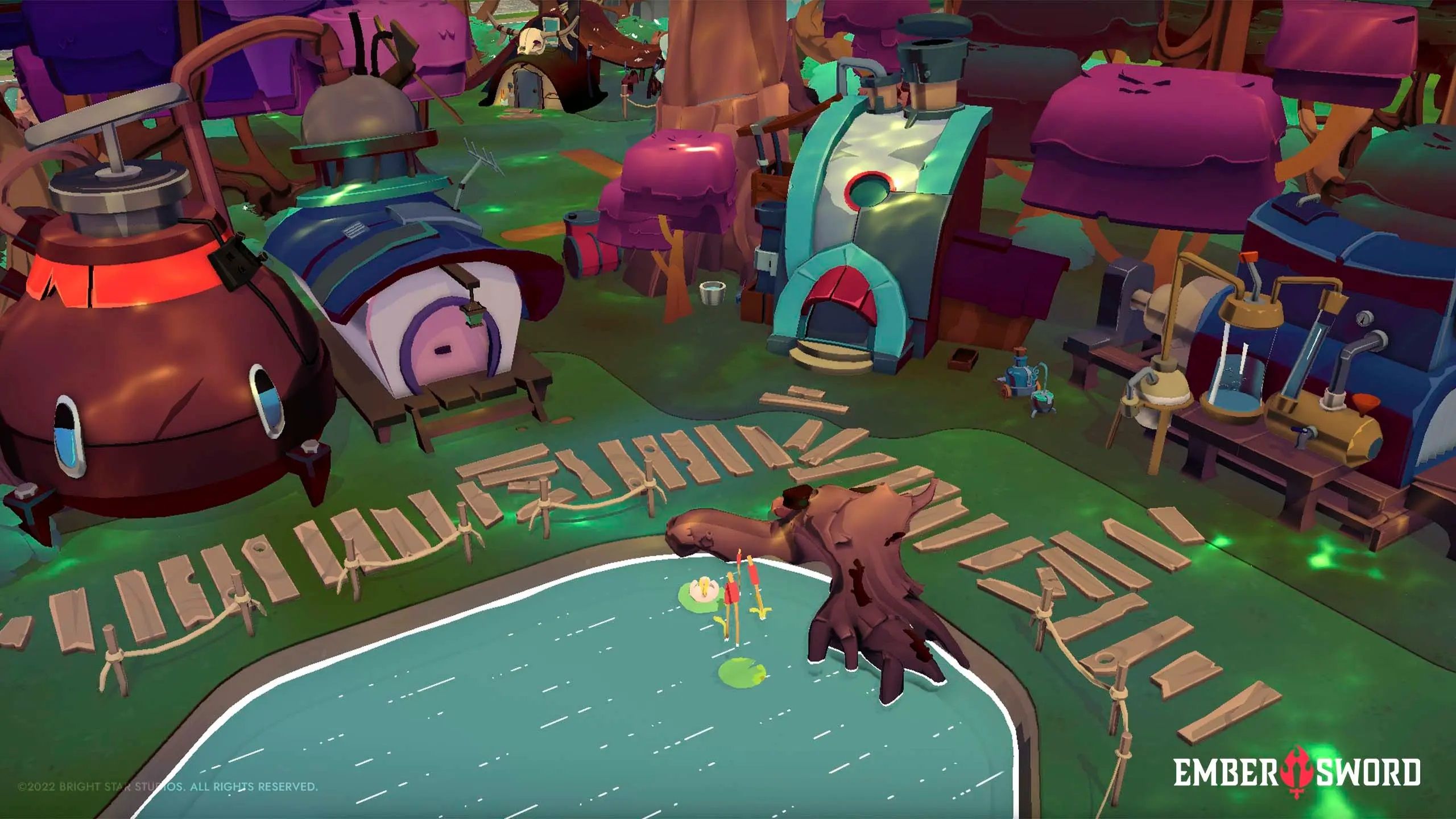 Despite an emphasis as a game first, Ember Sword still utilizes blockchain for land ownership, which has consistently sold out during each land sale, and the team has also sold NFT Badges, which provides early game access and other features depending on the level of badge you purchased. Here’s how Mo characterized the relationship between these NFT holders and the potential population of gamers who aren’t interested in participating in the blockchain game:

“There is now a new demographic of gamers, which are the blockchain gamers. They are gamers, don’t get me wrong, and they will be a part, and have a key part where they’ll maybe focus on one part of the game, like the economy, or on trading, or on the land and badges, and they should.

But if you look out there at the market of gamers, there’s like 3 billion gamers in the market. They’re limited by infrastructure, so imagine we’re able to offer them great experiences when you remove that part and suddenly it becomes accessible.

(The accessibility) alone increases the transaction rate, the engagement rate, the success rate, and creates momentum and that brings non-blockchain enthusiasts, like the majority of current gamers, into a world where they realize, ‘Hey, blockchain can be done right,’ we’re merging worlds. The landowners are there, and making content with you.

…If you just want to play, play! If you just want to trade, trade! If you want to be a landowner and create content, or just make revenue, there’s a place as well for you. The bigger the successes the greater the likelihood that everyone will get what they came for.”

Finally, the interview turned towards the current state of the game. Bright Star Studios was kind enough to provide the latest gameplay demo trailer for us, which showed off a populated world where many players could be seen running around with each other, battling monsters, and traversing the world. While the content was clearly a work in progress, it appeared to be leaps ahead of what was available during the technical test I had played back in March. Mo explained that the game has been making some great strides this year, as the team has expanded, and that has evolved the development cycle so that they are barreling towards an Alpha build quickly.

The process of getting a well-rounded feature set for Alpha has taken on a new approach for Bright Star. In the spirit of transparency, the team has decided to forego hard release dates and instead provide testing targets that would mark the start of the next development phase.

“Some developers postpone 5 times and then decide, It’s ready when it’s ready. Everyone likes to use this now. But we decided to say no, how about we actually look at the features we need to reach a certain point in the game cycle – Alpha, Closed Beta, Open Beta, Launch.

(We decided to) Open up with (our core community) and start a feature test process. Where, we say, these are the features we have for the greenlight process, you will test with us. Features that make it through the greenlight process (could) ignite Alpha, or ignite beta. The community has full visibility on where we are, what’s being tested and why it’s being tested, because some features aren’t even relevant for the community and they can give very clear feedback.”

Mo mentioned that combat has tightened up a lot where skills are starting to feel more impactful and rewarding, to the point where they are comfortable with talking about how they plan to balance popular combat features like PvP. The video depicts the melee set that the team has been working on, but ranged weapons will start to take shape very quickly, and the balance between each set will be an ongoing challenge for the team.

That brought us to the final question, where I inquired of any future testing that we may see headed our way, especially since we’ve had several testing delays in 2022. Mo ensured me that new tests would be on the way, and that when they start making their way through the different stages of development, we may even see testing open up to non-landowners and non-badge holders, which would give the greater gaming community the opportunity to jump in and test the game alongside their core community. Ember Sword aims to be available for as many gamers as Bright Star can reach, and while Mo couldn’t directly confirm if and when we would see testing on Mobile or on third party game stores such as the Epic Game Store, he did say that these are all features the team is looking at, and to stay tuned for more information on that.

It has been exciting to see how far Bright Star has come so far, and with passionate industry veterans like Mo Fadl on the team, it’s becoming clearer that Ember Sword is shaping up to be a unique MMORPG. I’m looking forward to the next testing phase, and I hope to see a proper Alpha version on the horizon.