A day before Tennocon 2020, I had a chance to sit down with Warframe’s Senior Producer, Dave Kudirka, over Zoom to ask him a few questions about the new update Heart of Deimos. While some of my questions were answered during Tennocon Live, there were a lot of tidbits I discovered during the interview that are very exciting. The new update comes out on all platforms on August 25, 2020.

What makes Heart of Deimos standout the most from other major updates?

Dave: This time we are really getting to what the heart of what the Infested is, its origins, its motivations, and how it came to be. That is really important piece to the Warframe story as a whole because we have shown in previous quests that the Infested are related to your warframes and there is that unique that connection. This is kind of like taking it to the next step and grounding that in this relationship of a family. It is really cool to bring that family dynamics. It really brings a difference to it verses you know, you helping debt slaves or a struggling fishing village, this time you’re in the mix with a family that have social interactions that you might be familiar with your own family. It brings an interesting facet to the origin of everything that is happening with Loid and the Infested and where we are going in the future with the New War.

In other open world zones we have gotten boss fights to farm things like arcanes and a new warframe, is there any boss fights in the Heart of Deimos?

Dave: We have mostly focused just on new enemy types because the past enemy types have just been an assimilated type of enemy you have seen before. It is like a Grineer that has been transformed into or a corpus moa that has been reshaped. Now you are going to see that a pure Infested creature. We have put a lot of effort into five or six different ones that you have not seen before. So, we have put a lot of effort into that and then there is also the wormy monsters in the background. There is an aspect to them that will affect the gameplay that is also interesting.

How many different types of Necramechs are there?

Dave: We started with two. Each one as their own suite of abilities like how a warframe would have its set. We showed just one version of it in the demo. But again, you will be able to customize it in your arsenal. You know the weaponry that is being mounted on and your colors and hopefully mod it up.

Can the Necromechs be upgraded like Warframes with mods or are the more like Railjacks with component upgrades?

Dave: They are much more how you upgrade a warframe with mods and ranking up. The difference is you can summon them like you do with your K-Drive.

So, there is going to be specific mods for the Necramechs?

We now have every slot for Kit weapons, is the next step kit Necramechs?

Dave: Right now, you are just choosing a heavy weapon that you equip to it, but obviously as we roll along and see how people are using them, there is always the opportunity add other attachments or things like that.

How do all the resources from the rest of Warframe get linked together in Heart of Deimos?

Dave: Oh yeah, that is one of the coolest things. If you got to see the Helminth. In the Helminth infirmary you will be feeding it to upgrade to this Helminth chrysalis feature. That’s going to let you feed the Helminth resources from all the stuff you have collected already from other regions and planets. It will feed into this system depending on which warframe ability you are trying to learn or extract. It will require certain resources to feed the monster. That is one way we bring it all the way back to let you use some stuff that has been stockpiling. 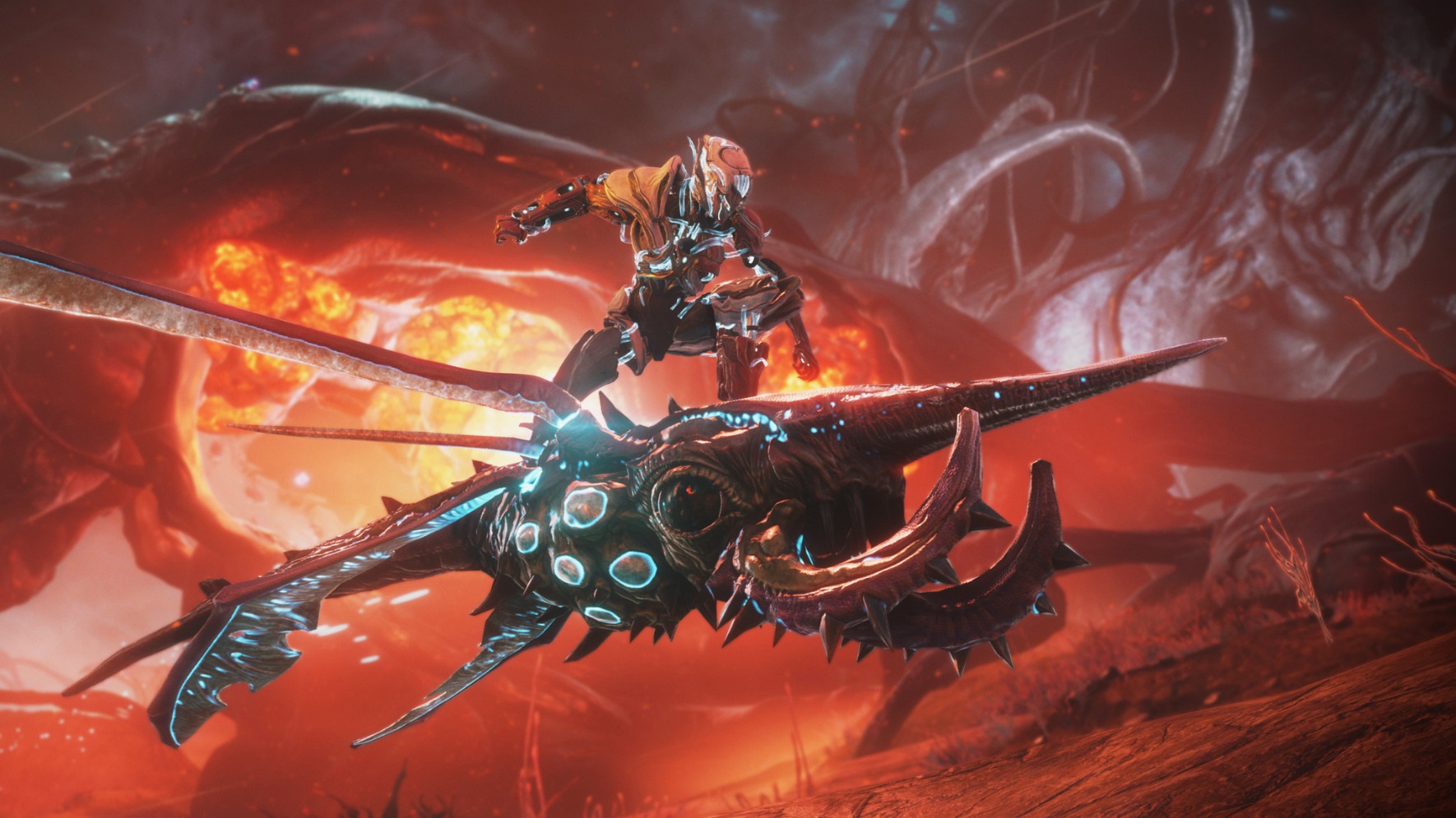 Dave: There is only one type. There are variations but it is still that dragonfly.

Because warframes are very agile and have a wide range of abilities and weapons at their disposal, what is the benefit of only using your secondary weapon with K-drive combat? More resistances to damage? More maneuverability? Faster fire rate or higher damage?

Dave: Our plan is to actually have some mods as well that tune that so you can really pump out your efficiency if that is the gameplay that you want to do. You want to ride your dragonfly and shoot the bad guys then we are going to give you what you need to boost that up and make it worth you while to use that.

Can we expect the bugs to be added as combat pets?

Dave: We do have some new companions planned to come with this. We will have to see if it makes the first release or a follow up release. But yup, we defiantly have that.

I noticed in the demo that the bounty system had about 10 tiers to them now. In the demo tier 1-3 and 6 were done. Those missing tiers were bothering me. How do the bounties work in HoD and how does it differ from the other open worlds?

(Note: this changed from the press version of the demo to the demo showed at Tennocon Live. In Tennocon Live there was only three tiers to the bounty system not 10. As Dave said, it was just a placeholder at the time of the press demo)

Dave: Honestly, it is very similar to the bounty system that you already know. It is just going to be chained until you get to the end of that chain. We can choose if it three, four, five steps. We do not have a 10-step bounty made. That might have been just a product of our demo thrashing, but the possibility is there. We like to build the game where we can mix and match to be modular and have different things. It fits with our philosophy.

Is there going to be a new cinematic quest with Heart of Deimos?

Dave: Yes, defiantly. I think that is where you will really get the meat of the story, of the Entrati, and what is going on with the Infested. That will be your first stop when you get there.

In the press demo I asked how Heart of Deimos ties in with the lore for The New War. I was told it is about keeping the heart beating. Can you elaborate on how the Lotus and sentinel army ties into the heart beating?

Dave: I cannot… it is defiantly connected.  It will fill a lot of gaps that you might have had and had questions, so I think it will really get you to a new spot where you are like. “ok, this is where we are going next!”

Can the heart stop beating? 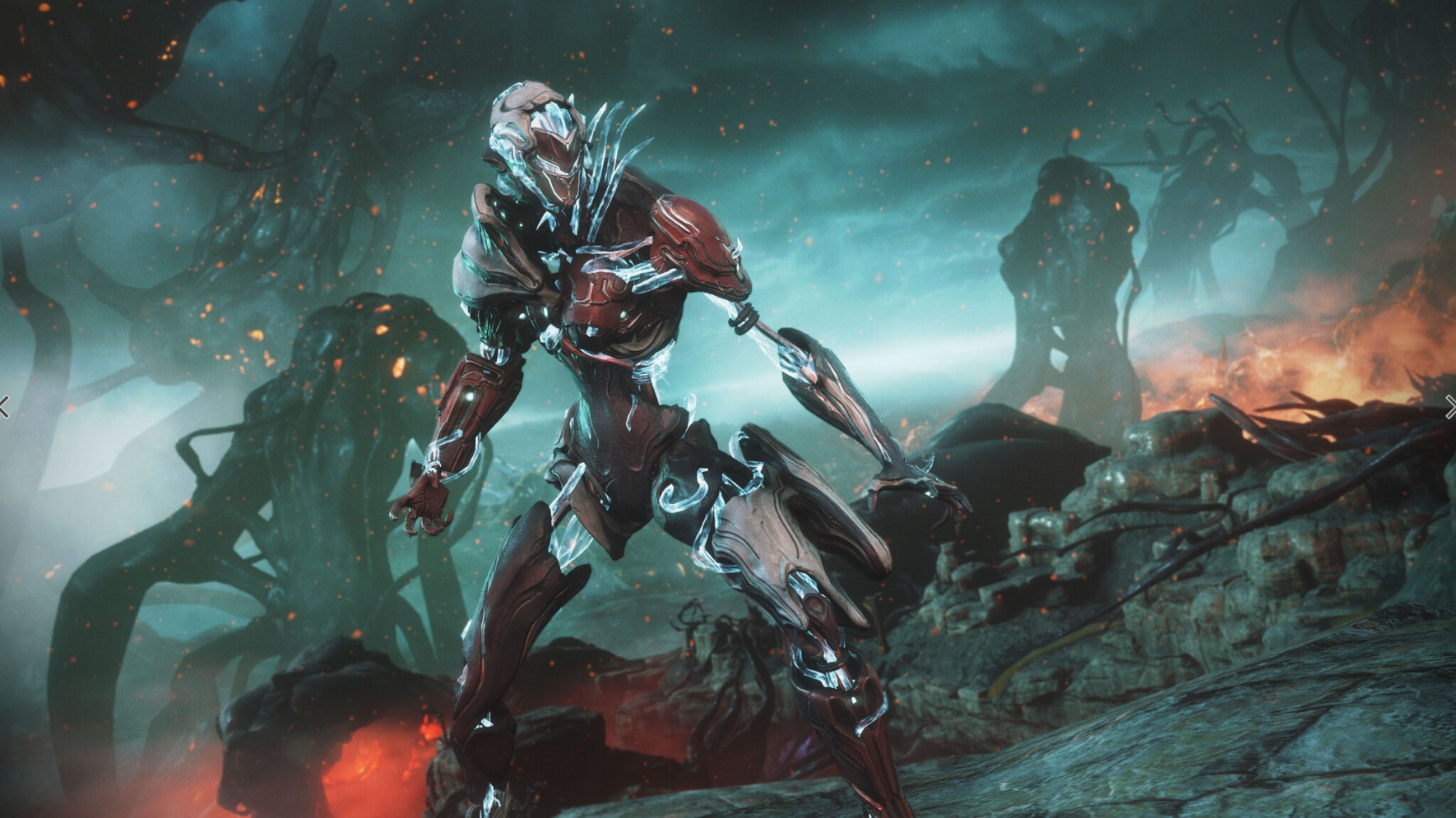 Is Railjack going to play a role in Heart of Deimos update?

Dave: Not in the Heart of Deimos.  It is not the focus. We were happy to update Railjack earlier in the year to make it a little more in line with what players want. We are not done with it, but we felt like we need to pause take this beat with Deimos. It is really important and a lore beat. It is really exciting landscape and I think we will get back to all the other things that we’ve been showcasing and saying we will get to, but this really felt like it was important to get to this point.

Any plans for ray tracing to be added with the next generation consoles supporting it?

With Heart of Deimos launching on all systems on August 25th, is the plan for next generation consoles to get updates the same time PC does?

Dave: That would be nice. Obviously, this is our first real crack at it. A big update like this on all platforms at the same time, we’re a little bit nervous about it, but also excited and optimistic. I think I am going to wait to see what happens with this one before I can show any confidence for the next gen.

Any update on Squad link?

Dave: I do not have any update for Squad Link for you for this particular update at least.

Any update on the new player experience?

Dave: With Heart of Deimos we want the new player experience out at the same time because if we can capture any interest from new players to come in, we do want to give them that best first impression. We think with opening with that cool cinematic and then we built the game space that it takes place in. It makes sense. The real goal is to make that a nice smooth introduction for new players to get onboard with us.

I want to thank Dave Kudirka for taking the time to answer some questions for MMORPG.com. I also want to thank Douglass Perry the Public Relations Director for all the hard work in scheduling the interview.  I had a lot of questions and all of them were answered. I am looking forward to the new update on the 25th. During Tennocon Live I went to the Tennocon Live Relay and bought all the Infested Prime mods I could. I am ready and geared to mow down all the Infested. Are you ready?