Earlier this month I had the opportunity to try out Humankind, Amplitude studio's newest foray into the 4X genre, during a virtual preview event where I was able to get over four hours of hands-on time. First announced at Gamescom 2019, Humankind is a new style for the studio behind previous hits Dungeon of the Endless, Endless Space, and Endless Legend. In Humankind, players will start in the Neolithic era of history and build a culture up through to the Modern era. Here are my full impressions from my time playing Humankind.

From Neanderthal to Powerful

I admittedly don’t have a lot of experience playing a wide variety of 4X games – I like my Civilization a lot and I’ve dabbled in the Endless games before, but not enough to truly understand and appreciate the intricacies of them. I always got bogged down in the minutia when I started out, and it usually worsened as I explored. So I was excited but nervous when I first logged in to the Humankind demo earlier this month.

I started out at the very tail-end of the Neolithic era, so there wasn’t much exploring to do until I was able to promote my culture up to one of the four Bronze age cultures available in the demo. At launch, each new era will have 10 cultures to choose from – for a total of 60 – but we were limited to only four during this demo. For this run, I relied on my previous Endless experience and chose the culture that seemed most suitable for war: the Hittites. After all, I expected combat and I wanted to be ready to fend off my territory. 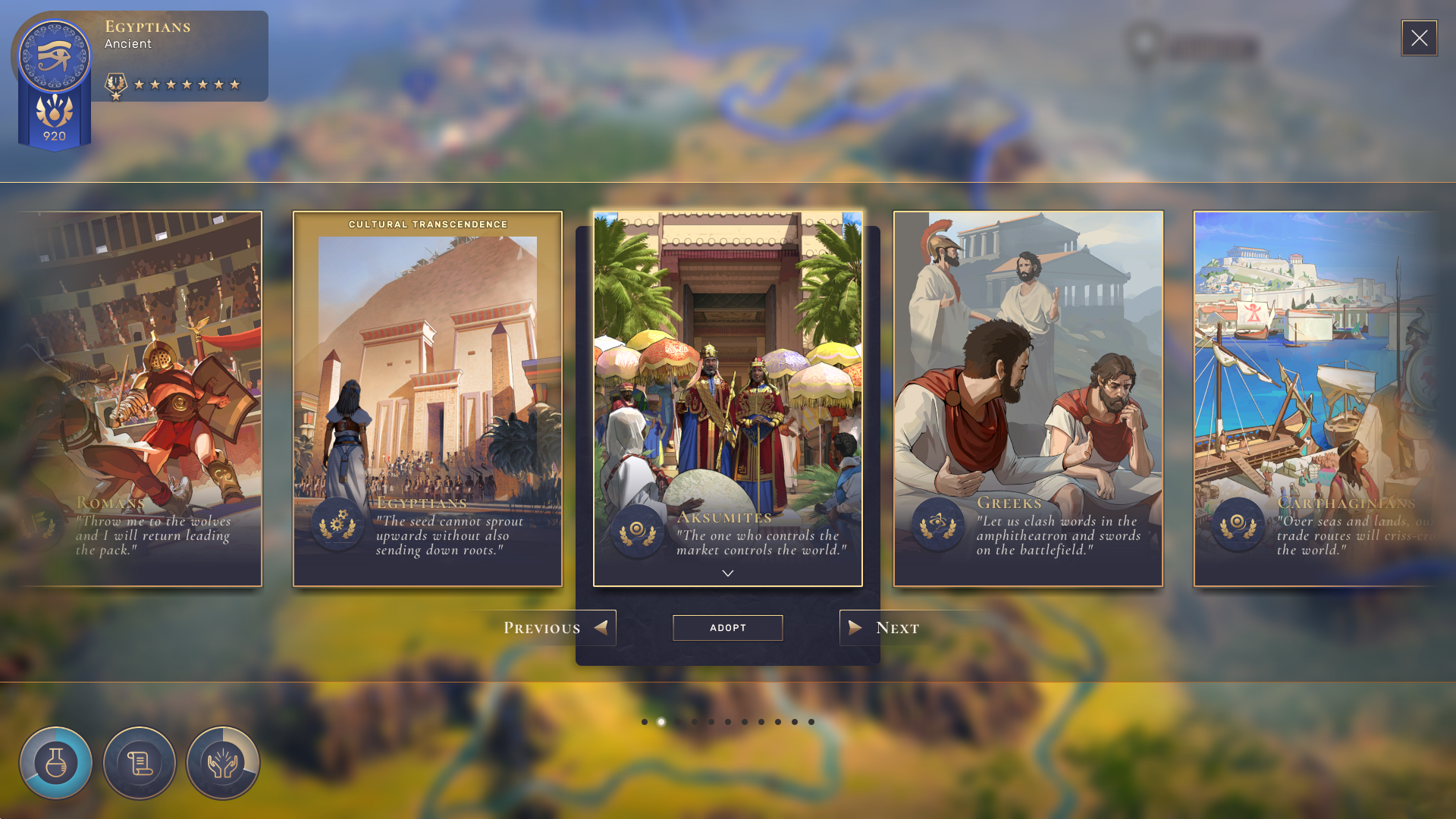 Each culture has their own bonuses. Some have better combat units, while others are better at producing a particular resource. But with literally 1,000,000 different possible combinations of Cultures available through the course of a campaign, you’ll be hard-pressed to get bored with all the eclectic gameplay styles imaginable.

The next important step in Humankind was deciding where to start building my city-state. Like Endless Legend, there are different regions on the map that each contain unique resources or special materials. By claiming one region over another, you set yourself up for different advantages. It’s therefore wise to try and pick a spot with the most resources that are compatible with the type of culture you picked. You can eventually establish outposts in neighboring regions as well to spread your influence and gain access to even more resources to exploit.

To fans of Endless Legend (and to a lesser degree, Endless Space) you are going to feel right at home with Humankind. The UI is strikingly similar but comparatively streamlined and easier to read overall. There are some new gauges to pay attention to, like the stars and the Fame score in the upper-left side of the screen, but the main resources were on display right at the top. Now, this was just a demo so who knows where the final placement will be for these UI elements, but at least during the time I got to play I felt like it was a considerable improvement over the smaller, hard to read displays in Endless Space and Endless Legend. 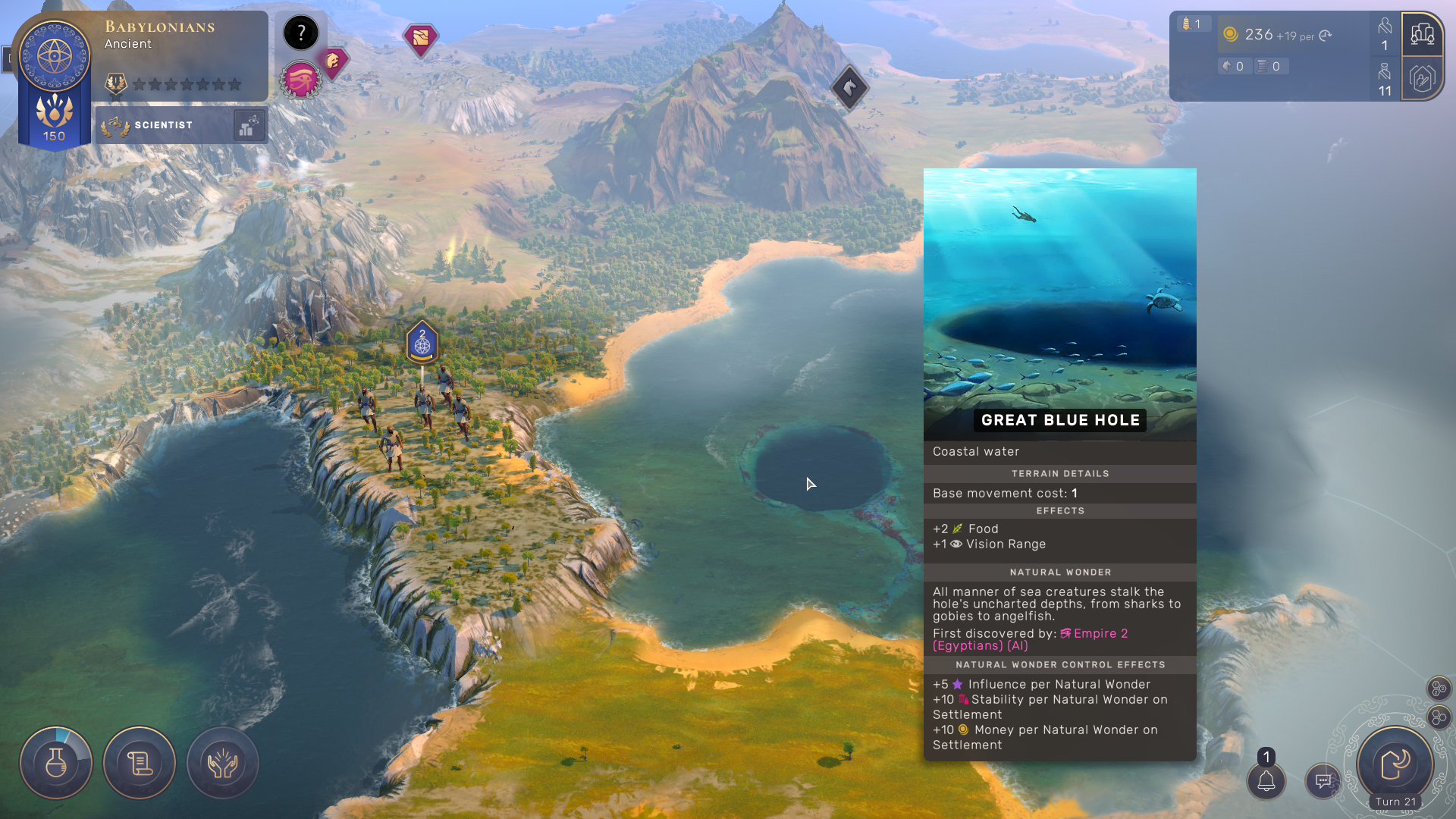 Managing resources in the beginning was my biggest struggle. With Science, Gold, Food, and Industry to all juggle, it can look daunting to new 4X players. What’s great though is that regardless of where or how you start, there’s always a way to exploit the resources in a manner that enables you to earn Fame and progress your culture.

Fame is like a scoring system in Humankind; you’re rewarded Fame for different achievements throughout the campaign. You can earn Fame by researching a set number of scientific discoveries, or using your resources to create additional people for your city, or even by being the first to discover a landmark on the world map. There are a plethora of activities to focus on, and there is no one way to “win” at history. 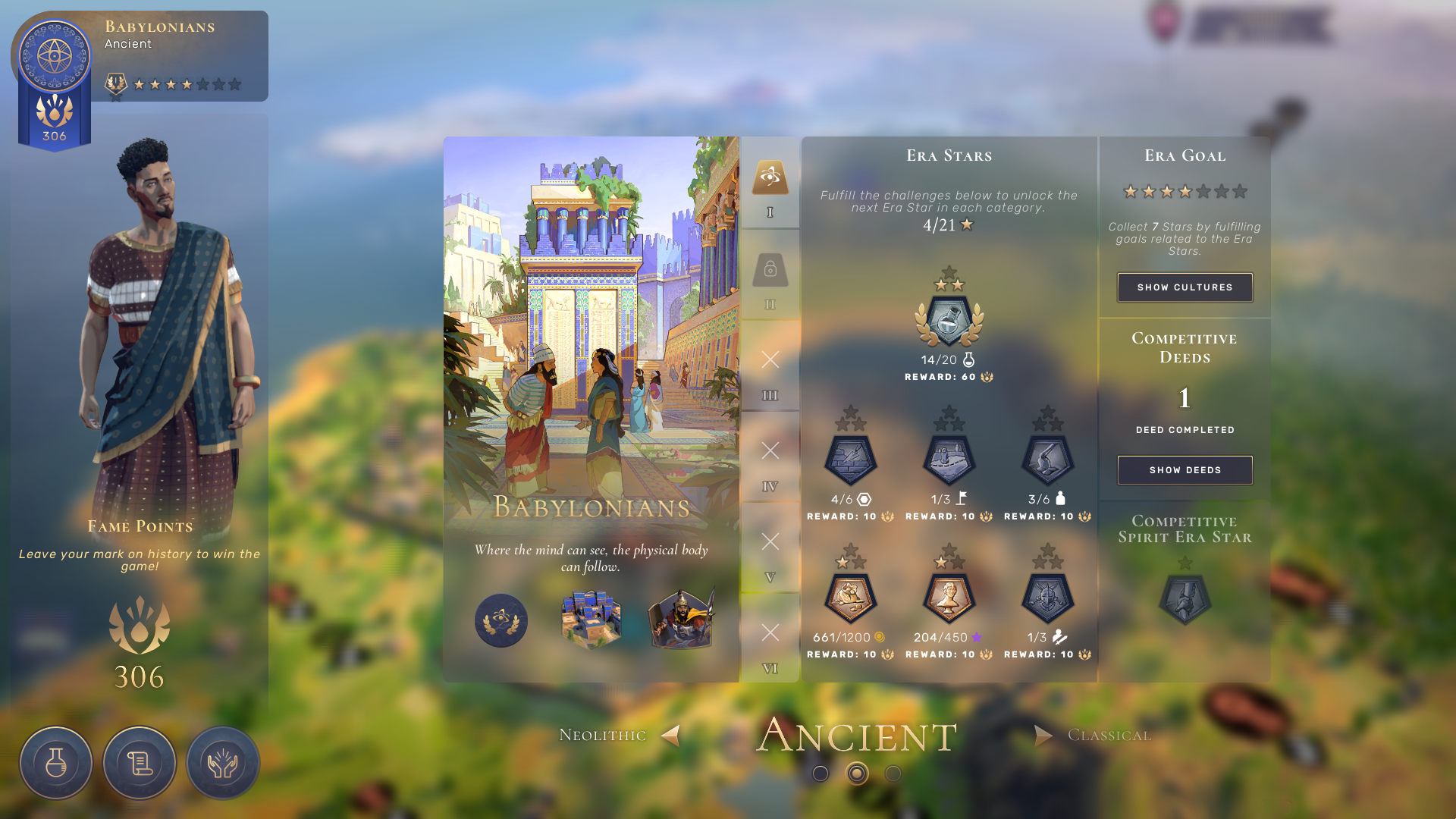 That said, the way I kept progress was via Stars that were doled out after hitting certain milestones. Regardless of your culture, the achievements appeared to be the same. For every new milestone achieved you earned a star, and after a certain number of stars gained you can evolve your culture into the next era!

A metagame aspect to Humankind is a range of ideological synonyms like Authority vs Liberty or Individualism vs Collectivism. At different times, events pop up that prompt you to choose between significant socio-economic developments for your culture, ranging from how Religious your culture will be to whether you will allow slavery in your cities. All of these decisions will have a lasting impact on how your culture will develop and even your relationship with neighboring cultures.

When I spoke with Creative Director, and Head of Amplitude Studios, Romain de Waubert he said, “for all these situations you are undecided. And then at one point you can take a stance.” Regarding slavery, if I allowed me culture to adopt it and a neighboring culture was against it, “they could actually push you – or at least one of your cities – to adopt to be against slavery as well. And if you don't, you may trigger a crisis with that country and that could lead to a war.”

To more dynamically impact these ideological scales, there are Civic points that can be earned that will allow you to choose certain benefits via a secondary ‘Civics’ tree. These won’t just affect ideologies but will also have the added benefit of acquiring permanent passive bonuses for your culture, like determining whether your Army Composition relies on Conscripts or if you have Professional Soldiers trained from birth. Conscripts would cost less to produce additional units, but Professional Soldiers have increased combat strength. Depending on your choice, your culture may move more towards being Authoritarian or geared more towards Liberty. But you must make sure to keep your citizens happy, or else “you could have a revolution happen if you have too many cities rioting against your power,” according to Romain. 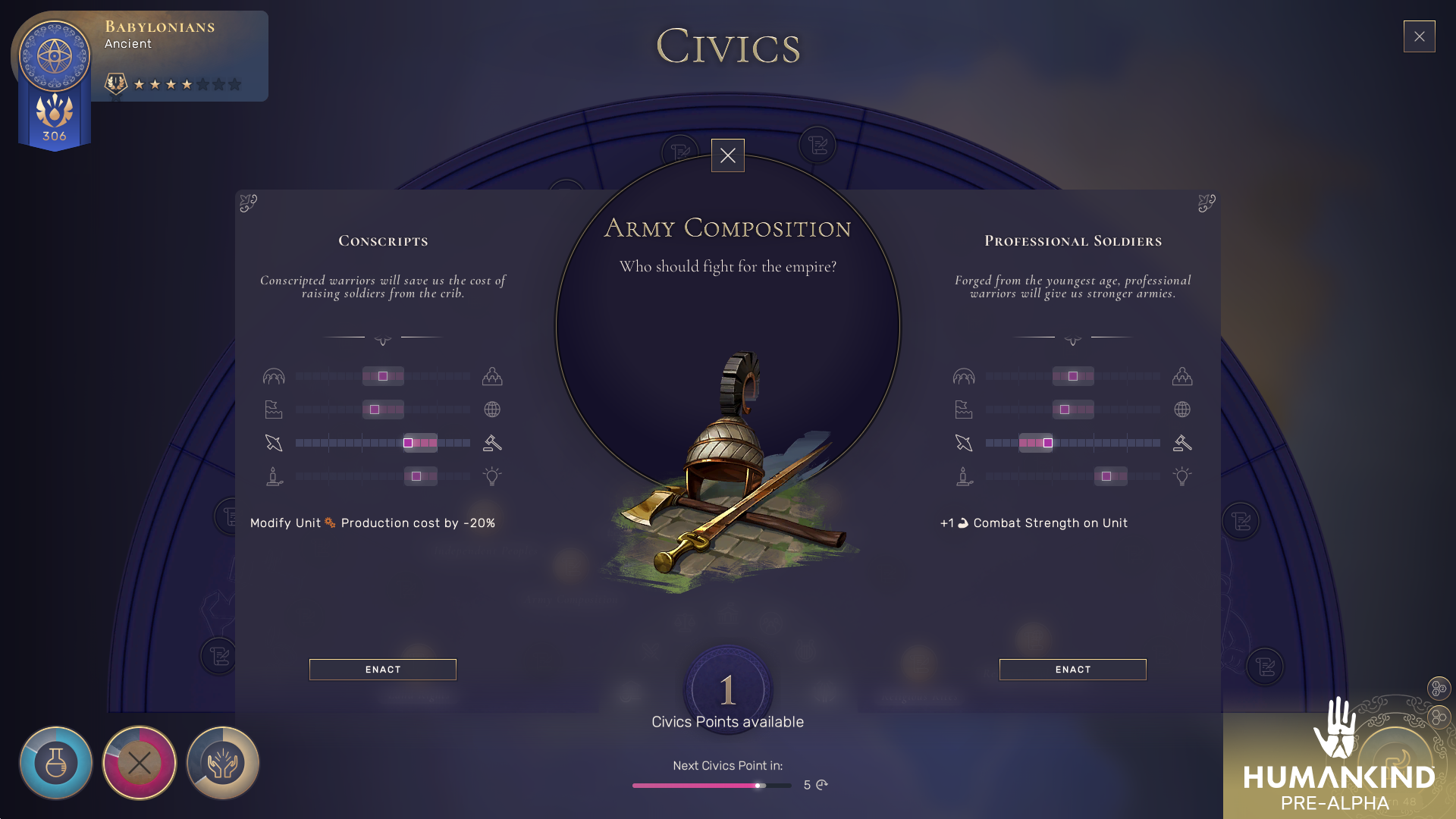 Advancing your culture right away might not always be the best idea, but it does allow access to additional military units for combat. There is a wide diversity of units ranging from simple scouts to horse-drawn chariots, archers, and even hoplites. Different cultures have different, oftentimes unique, combat units and it’s possible to mix units from different historical eras this way. Want to see the Babylonians fighting side-by-side with Samurai? It’s possible in Humankind.

The combat I experienced in the demo wasn’t feature complete, and the AI was noticeably lacking in tactical understanding. When I asked Romain about this, he said, “it’s quite an easy AI – it’s more like a sparring partner, but that’s what it is for the Demo.” He followed up with, “if you want a proper challenge… let’s meet up in a few months from now and you’ll be able to check out the AI. We’ll have some good surprises for you on the AI side.”

There were several features aside from a combative AI that were missing from Humankind in the demo. Some of the work-in-progress features include diplomacy, trading, influencing other cultures, revolutions, religion, and nomadic cultures being able to settle down nearby regions as allies. With so much more on the horizon, it’s no wonder that Amplitude Studios had to delay Humankind into 2021.

Thankfully, you won’t have to wait until next year to try out Humankind for yourself, since Amplitude Studios recently announced ‘OpenDev’ as a “new approach to community-driven game development.” From now until June 26, interested players can register on the Humankind website for a chance to get access to 3 limited-time only scenarios that focus on specific features to help the development team improve Humankind.