Drop, formerly Massdrop, has been a major player in the mechanical keyboard world for years. I’ve been using their compact ALT keyboard for almost a year and love it. Fully programmable, RGB backlighting and underglow, hot-swappable switches — what’s not to love? Drop recently added yet another layer of customization on top of these options with its new line of colored aluminum cases. When they reached out to see if I’d like to try one, I jumped at the opportunity.

Having never swapped out a case before, what better way to “review” this case than to take you along on the journey with me?

First things first, a refresher on the original ALT. 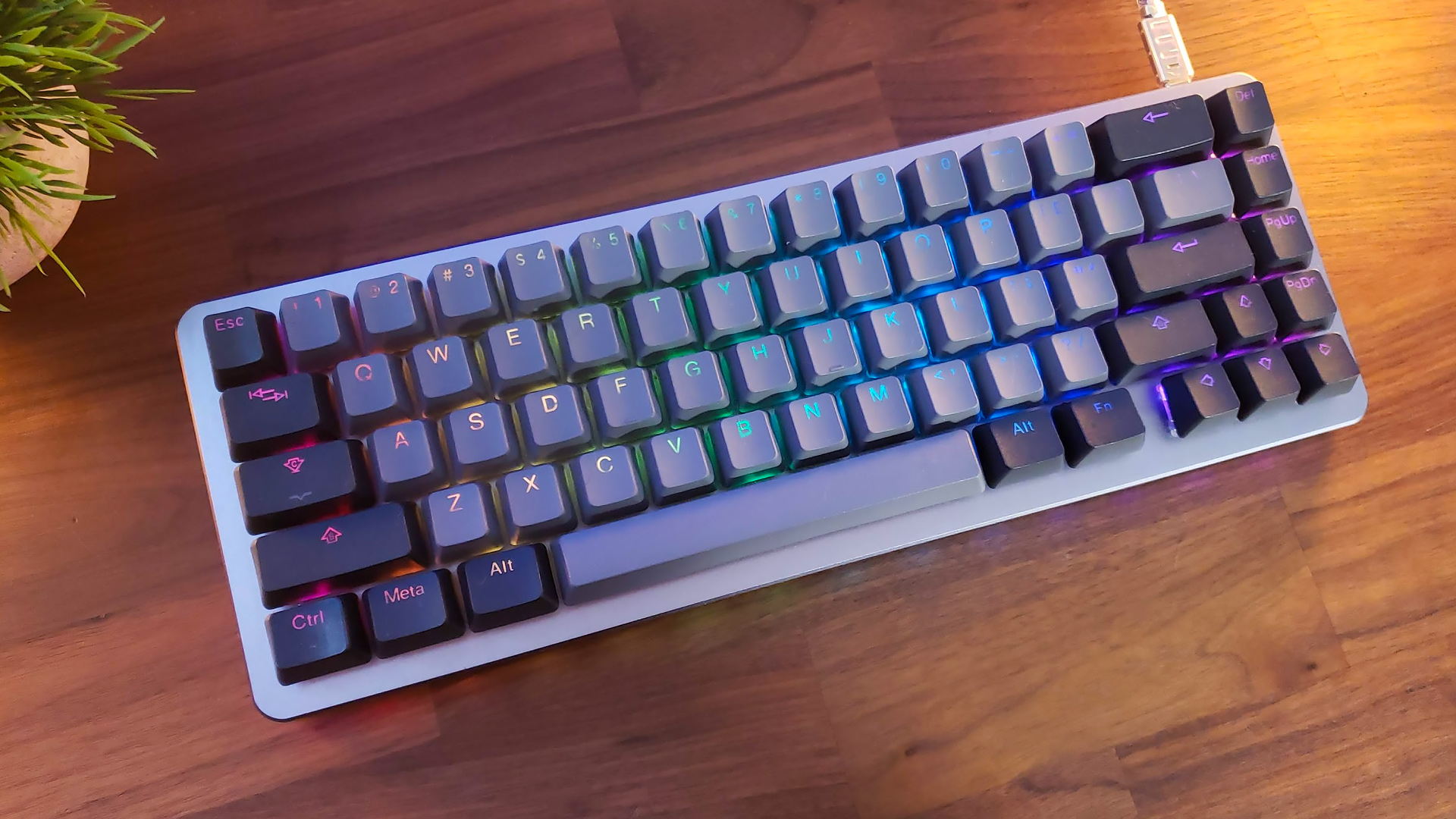 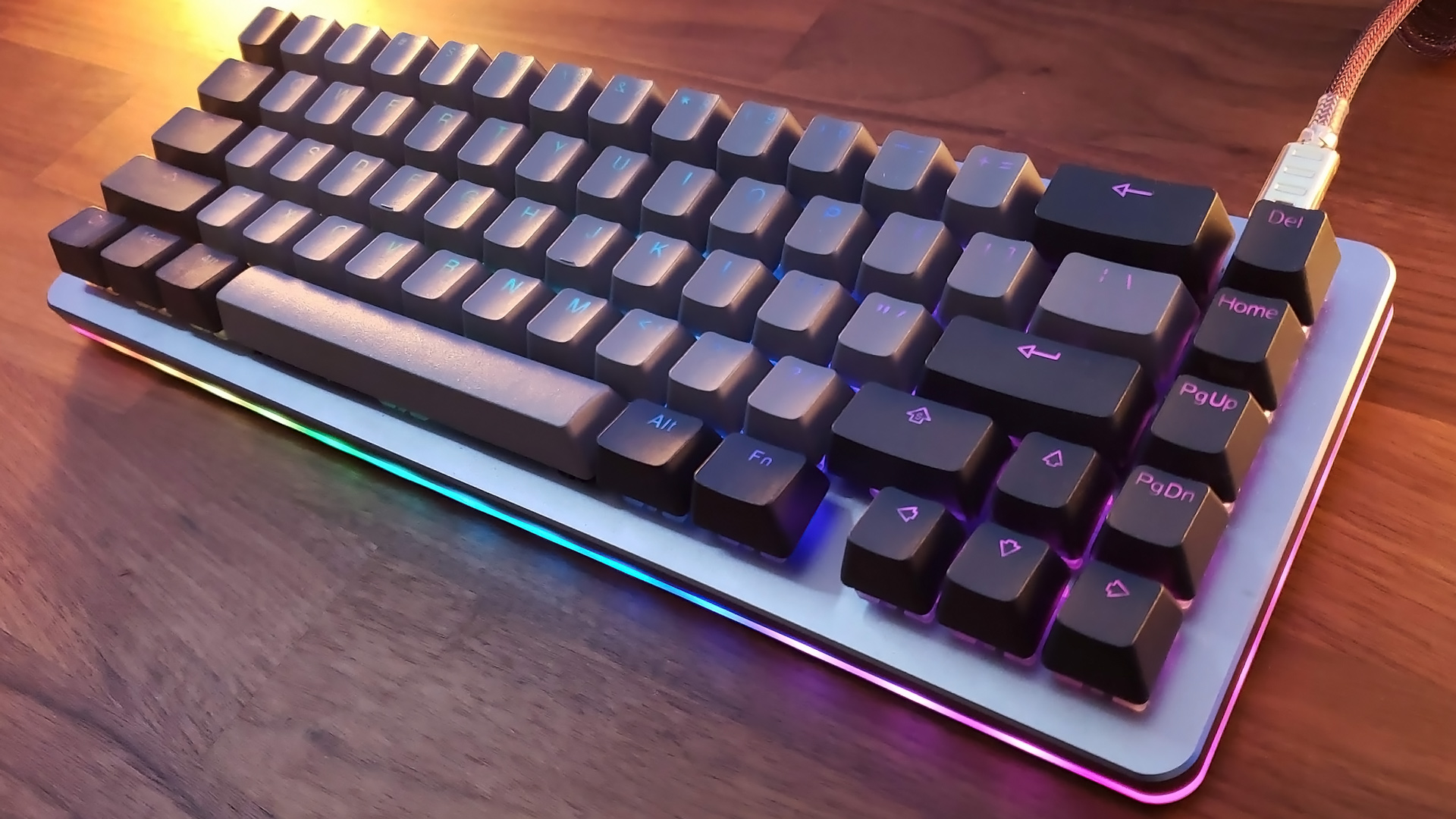 The ALT is one of two keyboards that Drop currently offers. It features a compact 65% layout which does away with the function row and number pad, but retains the arrow keys and most important editing and navigation buttons. Out of the box, it features your choice of Cherry, Halo, and Kaihua (Kaihl) switches, which are also hot swappable, so you can change them at any time without desoldering. It also features backlit, doubleshot PBT keycaps, and RGB illumination under each key and along the outer rim. The case, as you can see, is low profile and silver anodized aluminum, though a black version is in the works. It’s great. 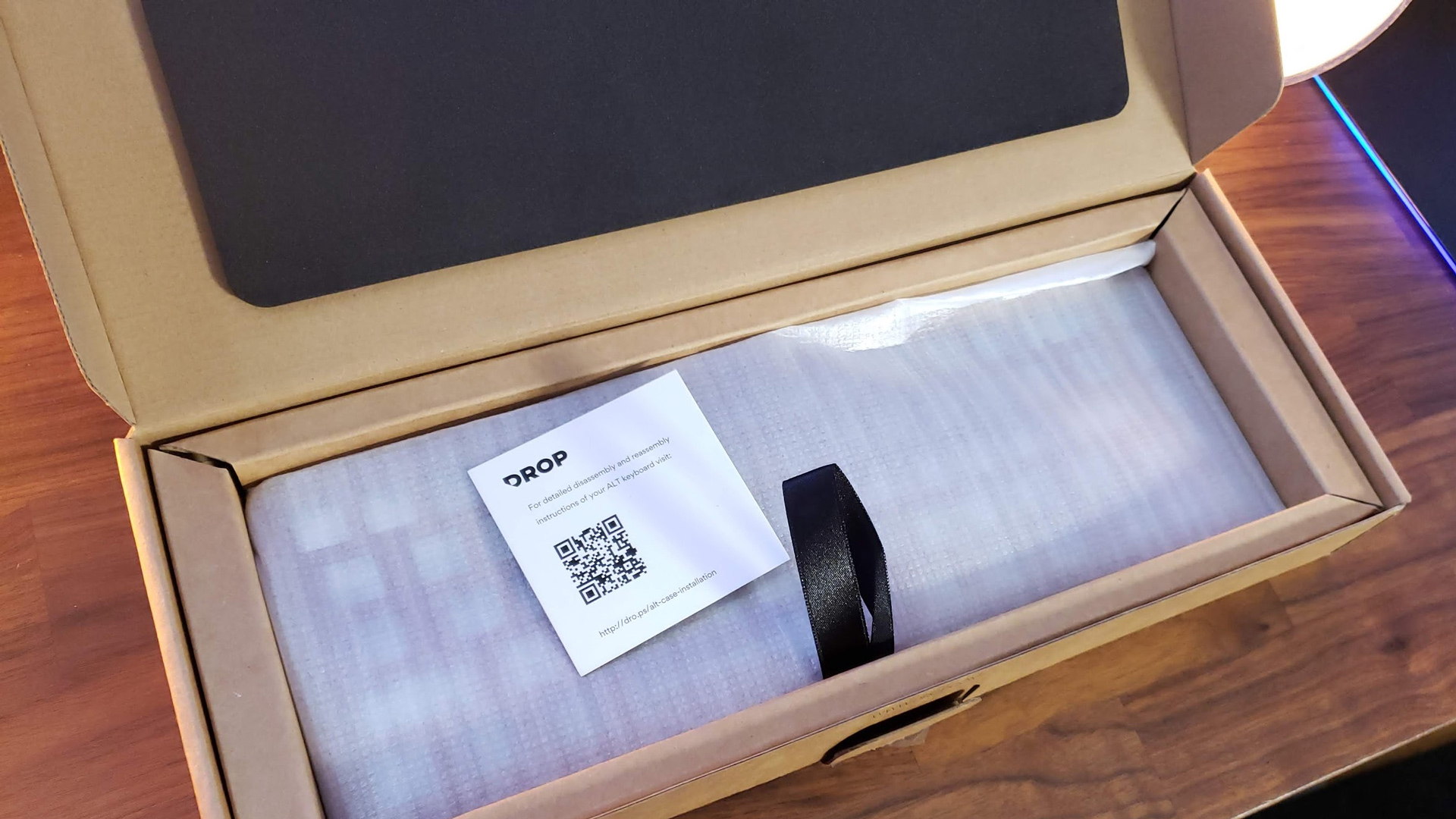 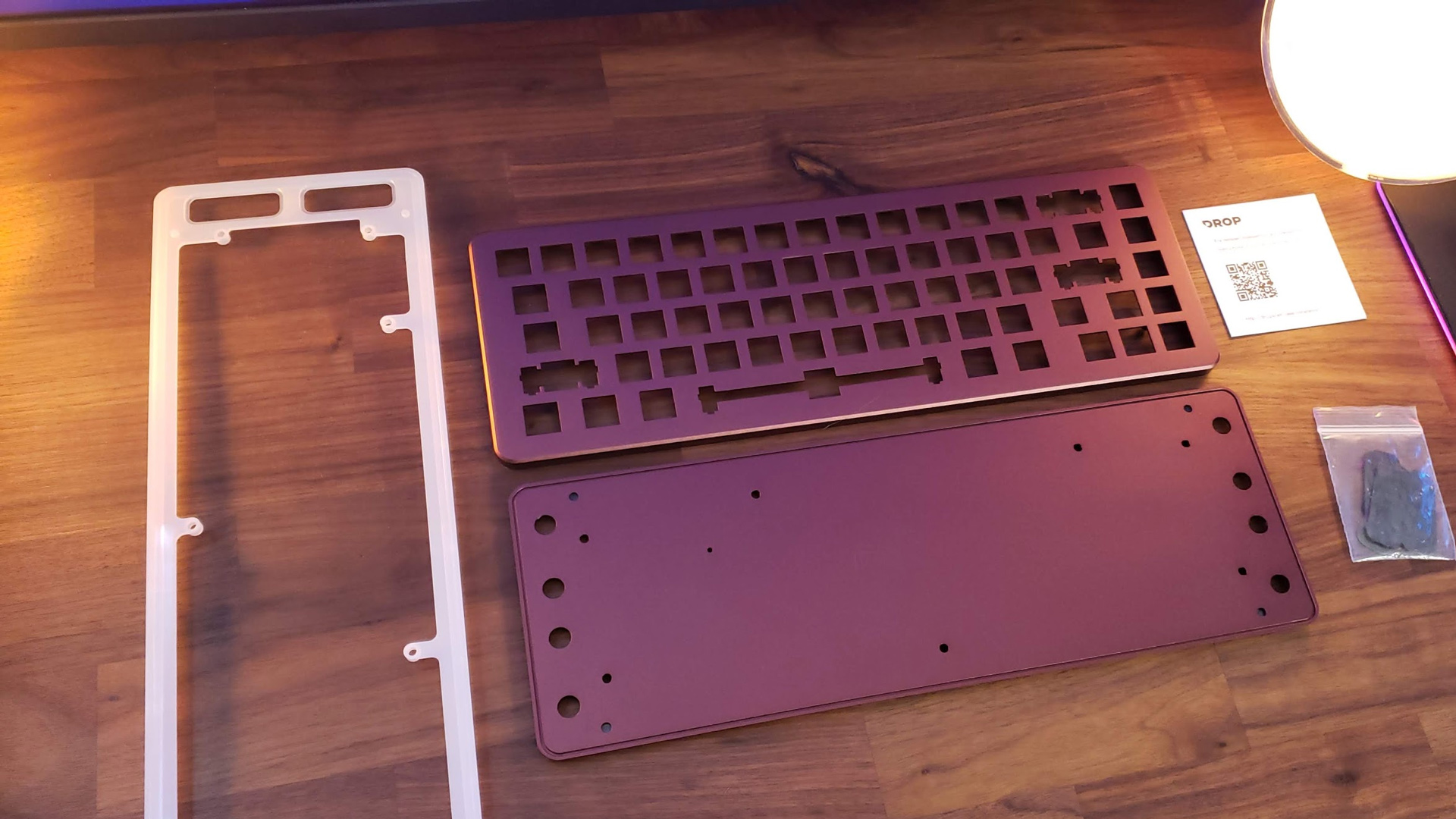 The replacement aluminum case includes everything you’ll need. It’s honestly not a lot because, as a case, it’s fairly simple. It comes in two halves, the top of which is also the plate where you’ll mount your switches. Since I had the original Massdrop version of the ALT, they also sent the new model of diffuser. Also included in the package are seven hex screws, two magnetic feet to increase your typing angle, and a set of four metal plates for those feet to attach to. The finish on the case is excellent with not a scratch, mar, or inconsistency to be seen. 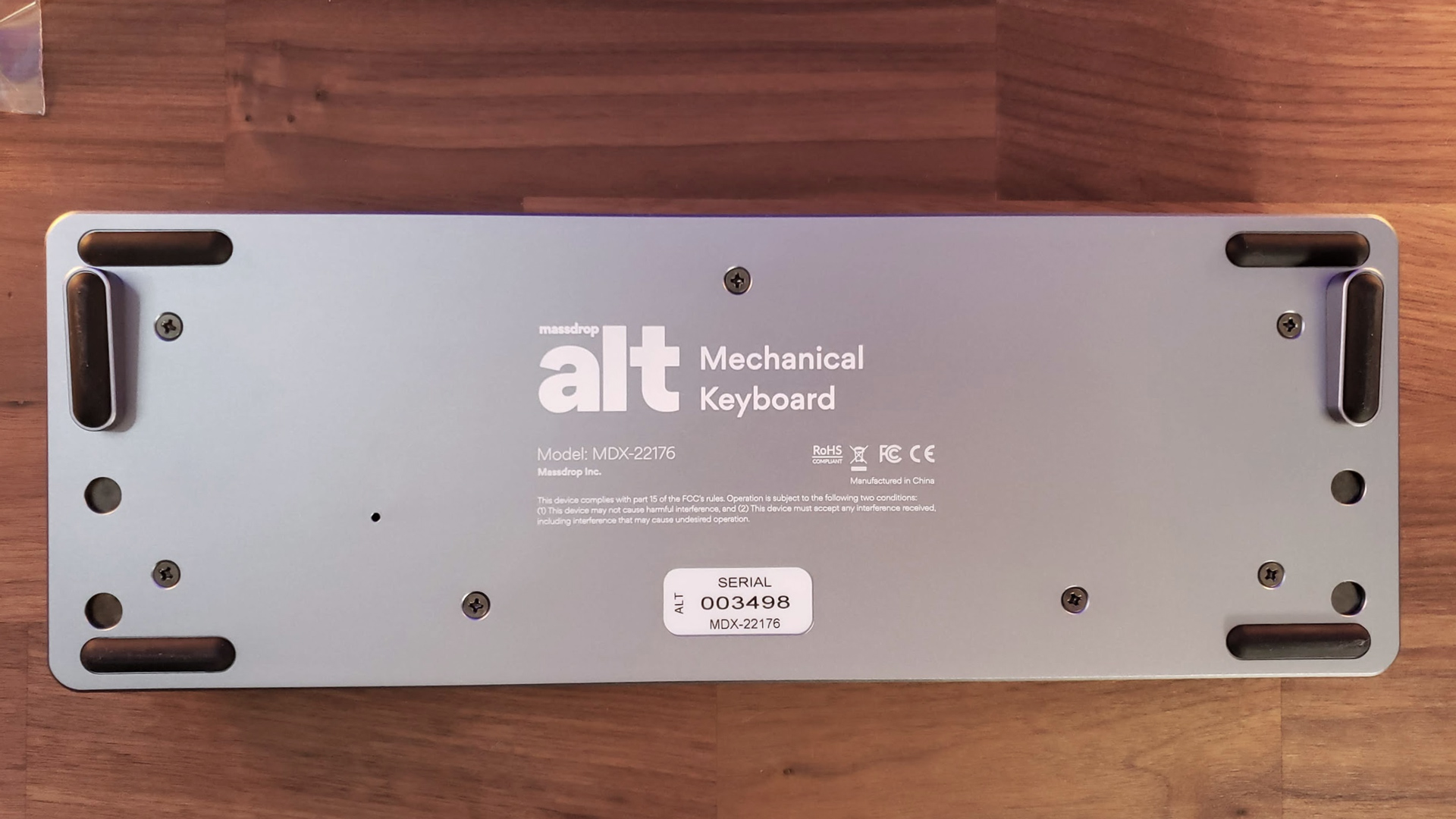 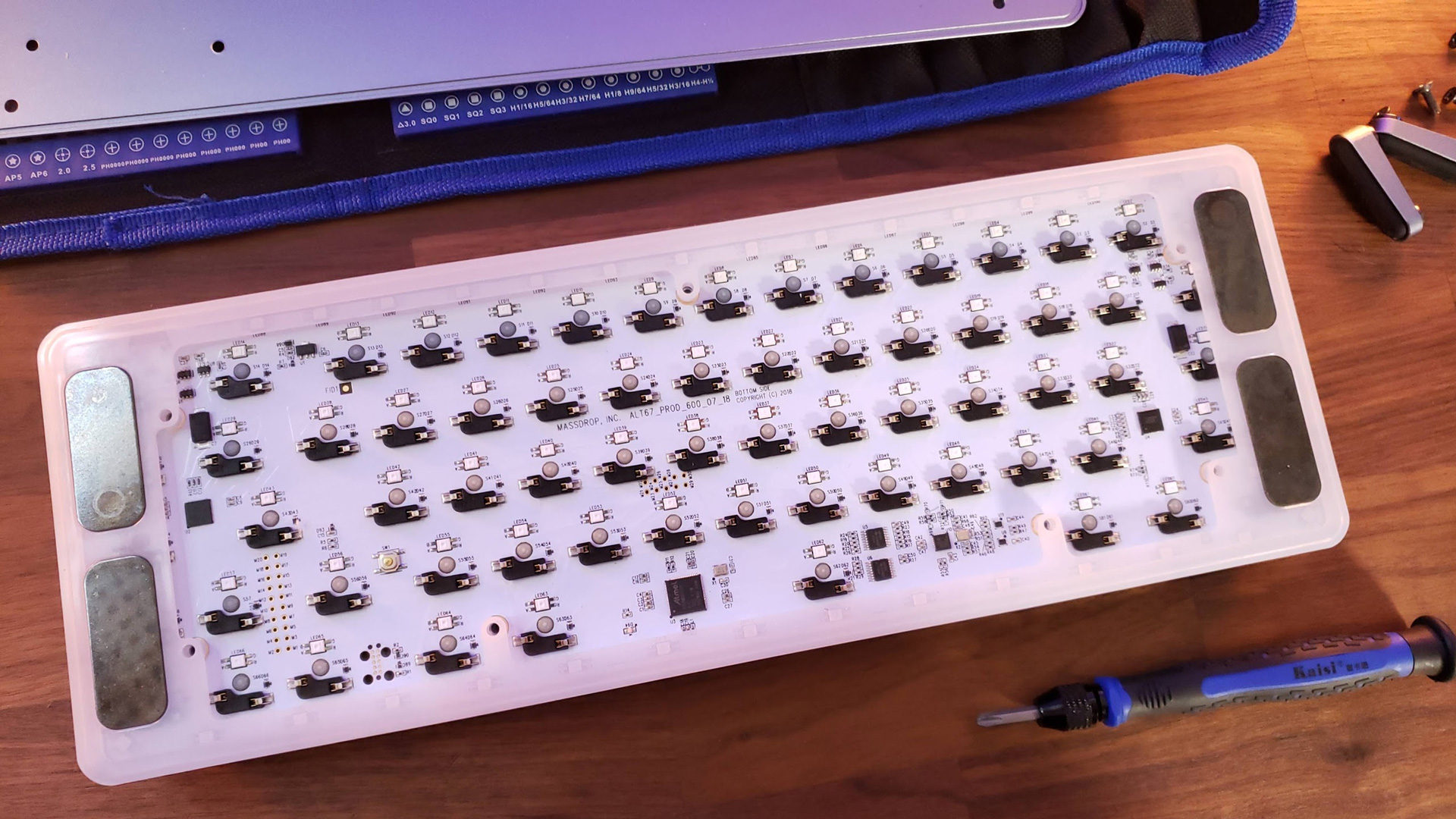 Disassembling the ALT is simple. There are seven screws that hold the bottom of the case in place. Once they’re removed, the plate comes right off revealing the diffuser and PCB. The black L-shaped pieces are the hot-swap sockets. The diffuser isn’t screw in place, so pulls right off. 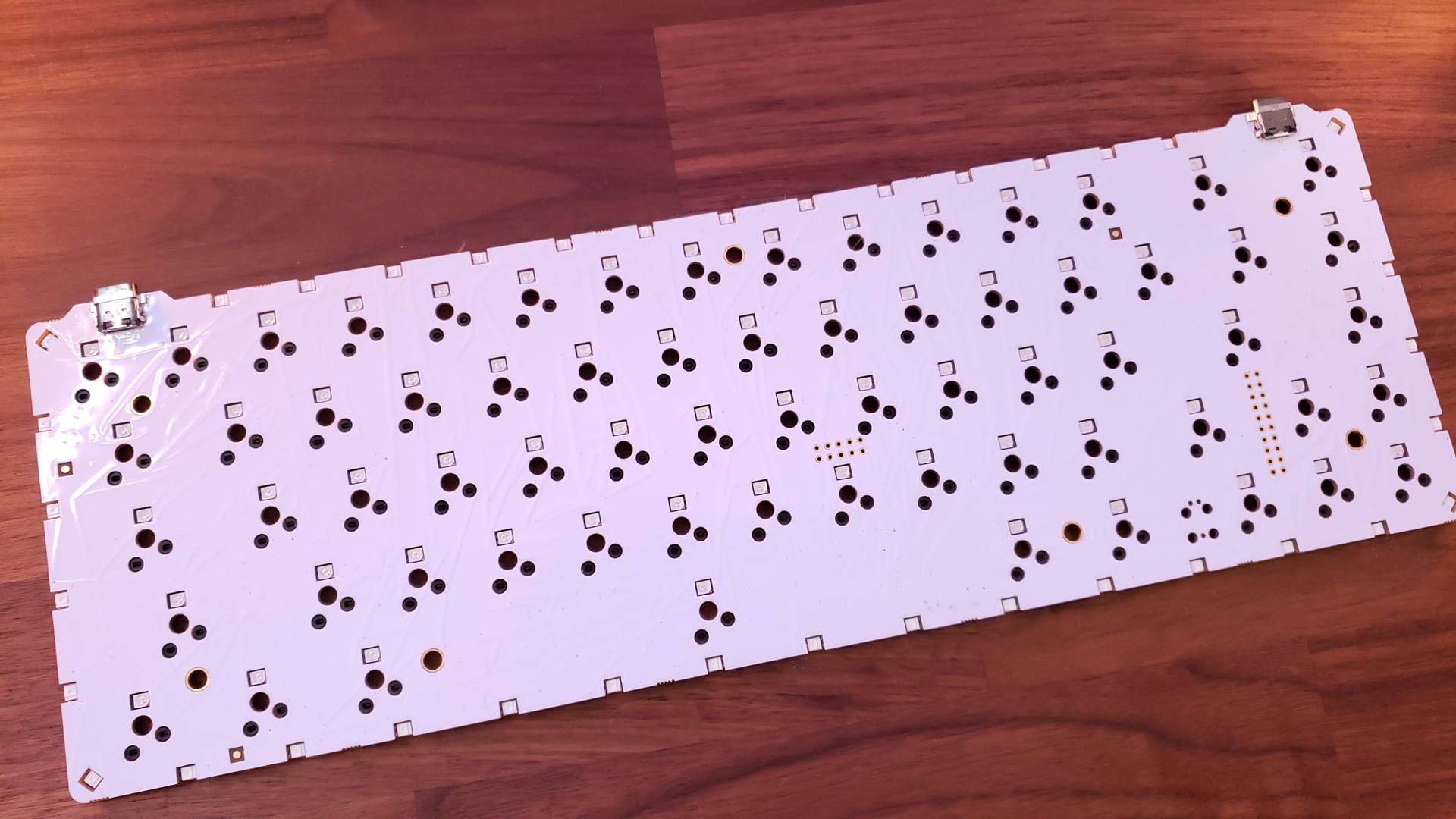 With the bottom removed, the only thing holding the PCB to the top plate are the switches. There are no keycap or switch puller included with the aluminum case, but both come with the ALT itself to easily remove both. Once the switches and caps are out, the circuit board slides right out and is ready for its new case.

It’s worth noting that the instructions for how to do this weren’t live at the time of I did it, so I may have done things out of order. It’s simple enough that a detailed how-to wasn’t necessary, though. 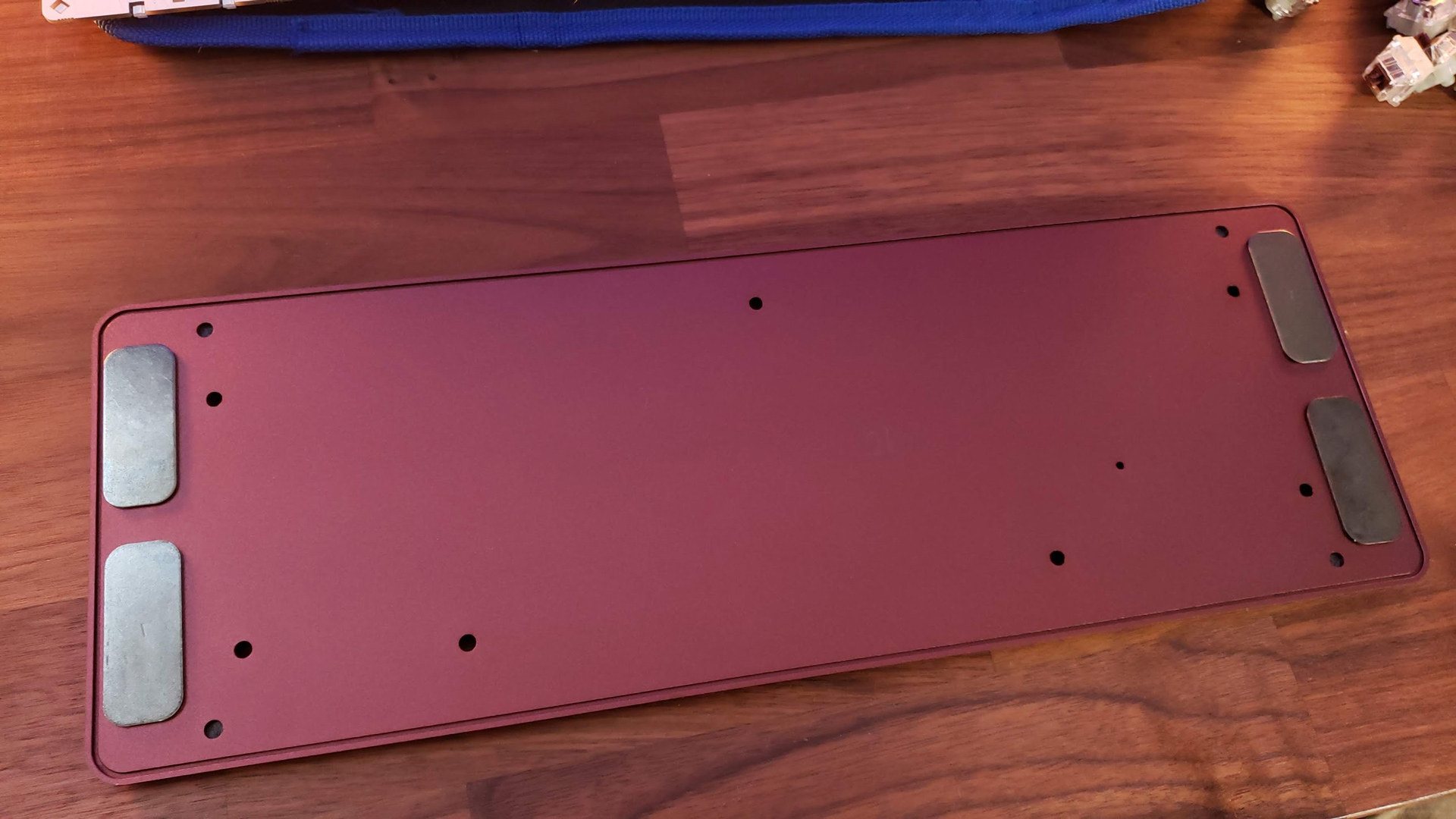 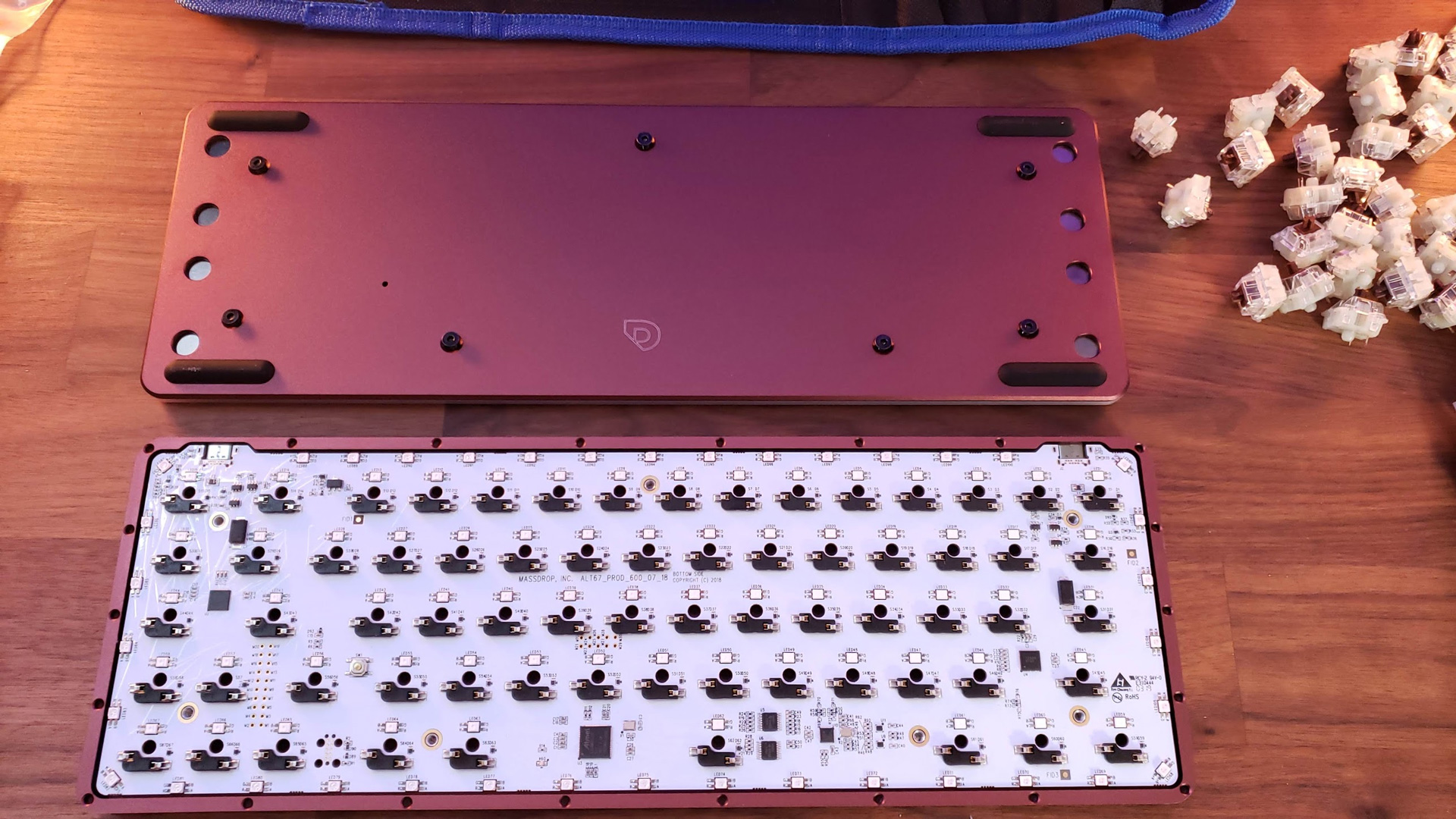 In the pictures above, you can see that I tried to place the metal plates on the case itself. This turned out to be a mistake because they easily slid out of place until the diffuser was held on top of them. I placed the screws in to hold everything together and gently slide the PCB into the top half and fitting both sides in place. Along the edges, you can see small holes that match bumps on the diffuser which makes it very easy to perfectly fit both sides. 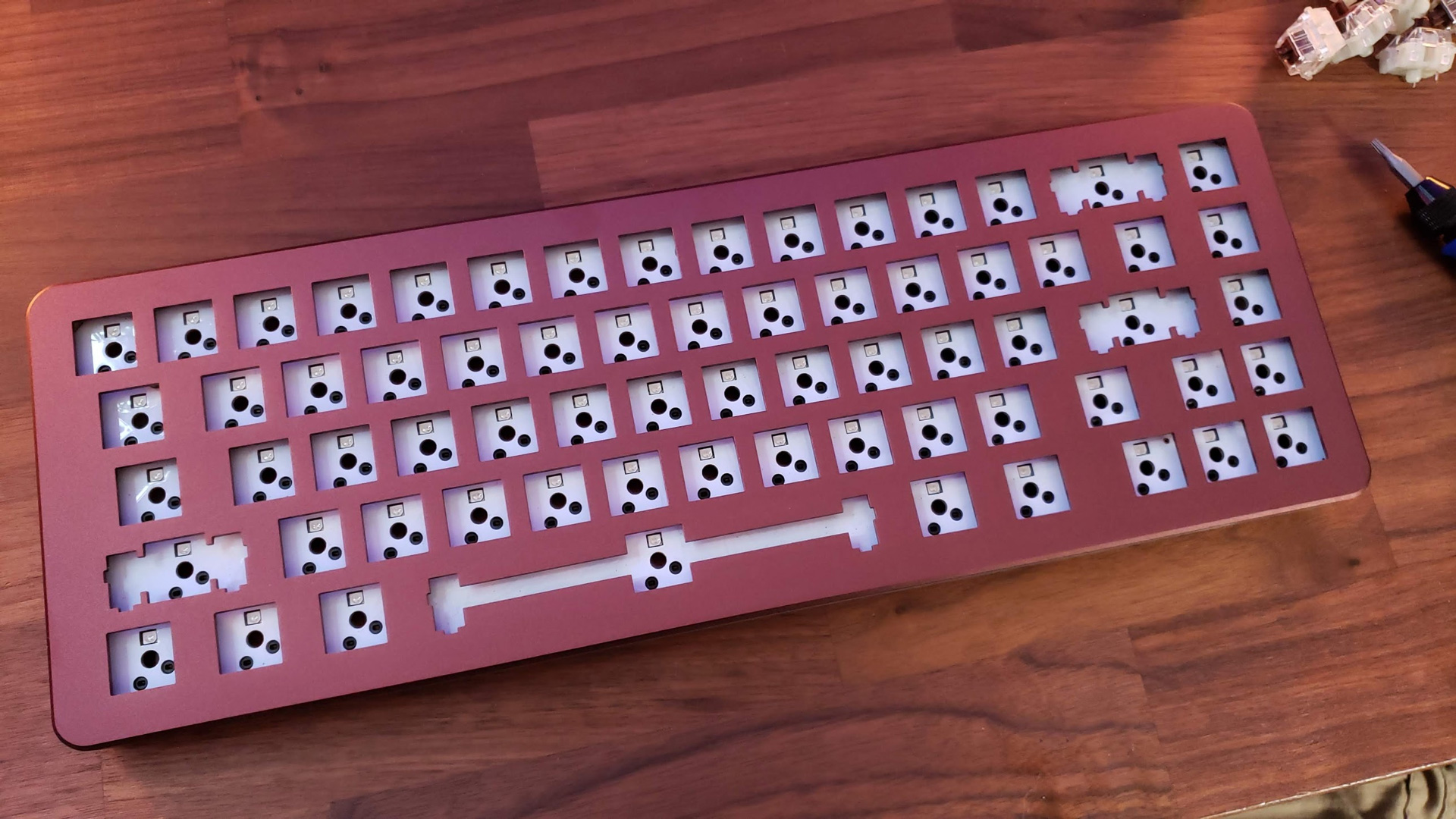 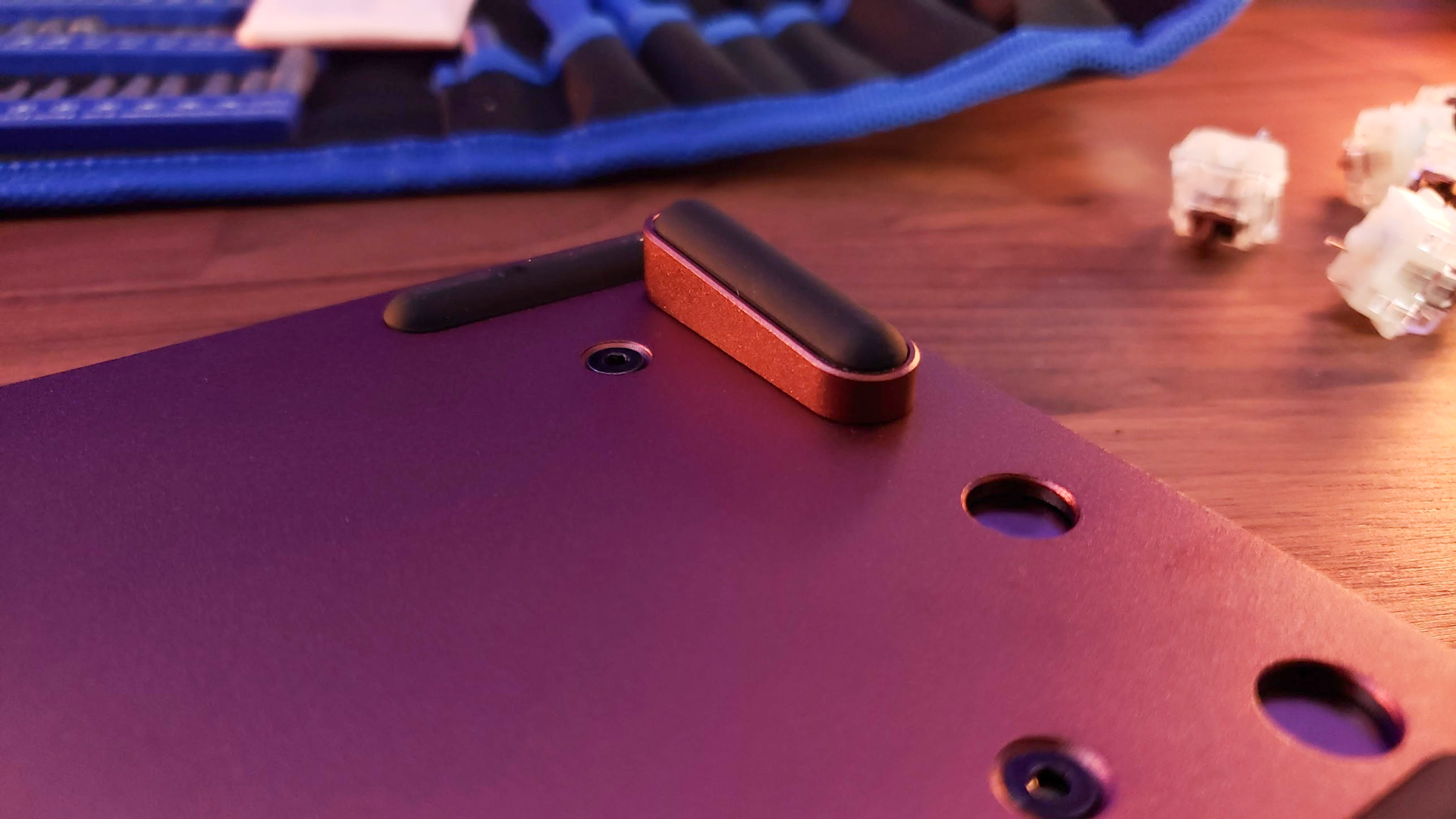 Here we can see the completed case swap and the tilt feet put in place. This whole process took about 20 minutes, at least half of which was just pulling keycaps and switches. After this, it was time to pull the stabilizers out of the old case and fit them into the slots here. They’re plate-mounted and simply clip in and out, so moving them over only took a moment. If you haven’t yet, this is a great time to add some lubrication to those stabilizer bars. 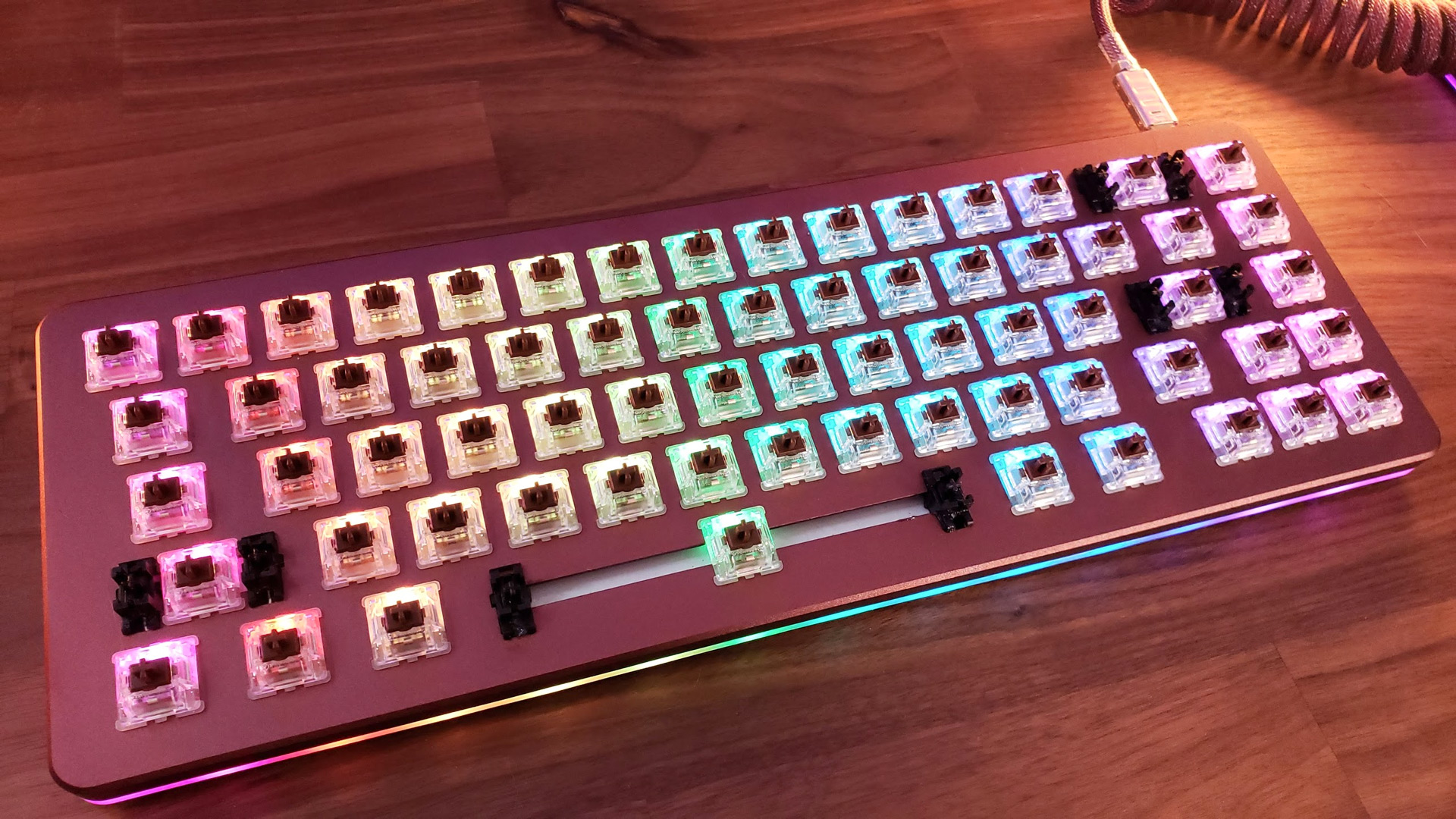 And thus begins the longest part of the process: replacing switches and keycaps. This is easy since the hotswap sockets only require that you line up the pins and press down, but there are still 67 keys that need to be aligned and pressed. I got lucky and didn’t bend any pins, but if a key doesn’t work, you just pull it out, straighten the bent pin, and press it back in. This is almost bound to happen but this was my lucky day.

After you’ve tested each key with a program like AquaKeyTester, it’s time to replace keycaps and you’re done!

Now, I chose Burgundy for my colorway because I’ve been sitting on a set of Drop + RedSuns GMK Red Samurai keycaps that I thought would look great. Here’s the final product: 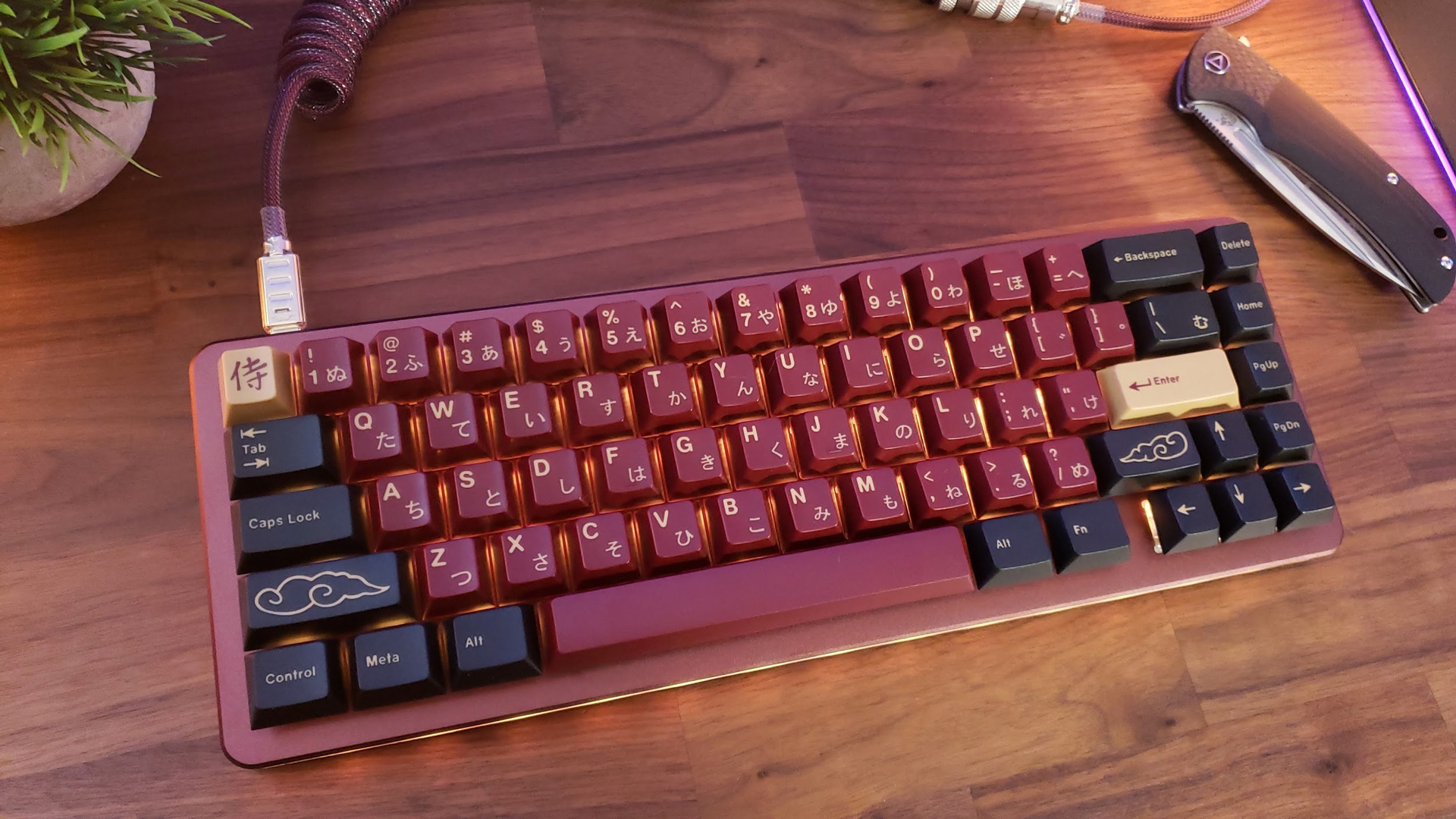 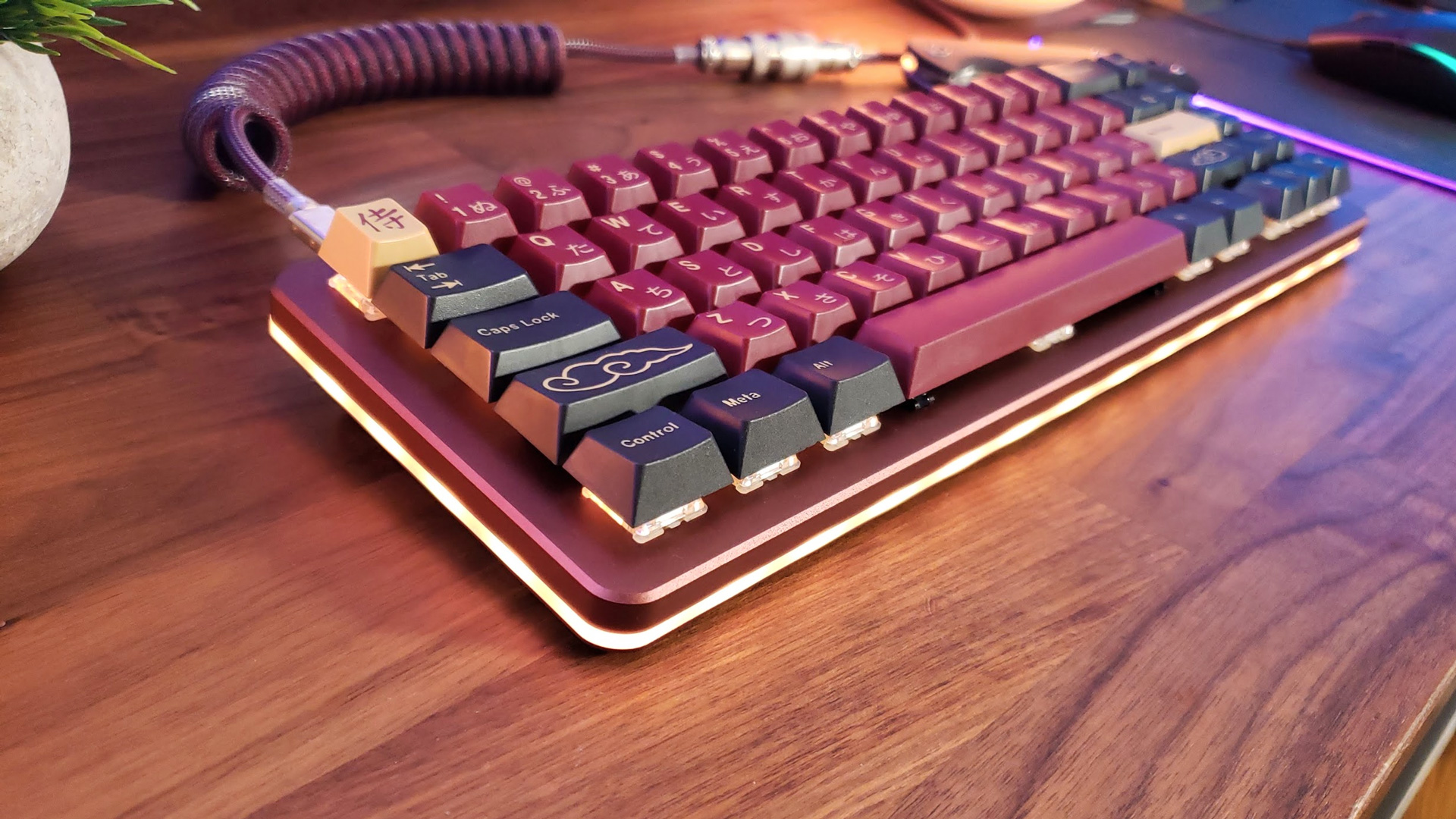 I used Drop’s online QMK Configurator to set the backlight and underglow to an amber hue and I think the results came out great. I also have a custom cable that I used here to match. I really couldn’t be happier with how this came together!

Swapping out a keyboard case isn’t something many of us do, but this is a genuinely cool option to have for a keyboard that’s as highly customizable as this. The entire process was easy and would honestly be difficult to make a mistake with. You’ll already need to own an ALT or CTRL to take advantage of it, but if you’re shopping for a pre-built, these are some of the very best keyboards you can find. With the addition of these cases and the wide availability of custom keysets and switches, the Drop ALT and Drop CTRL are some of the best choices on the market today. 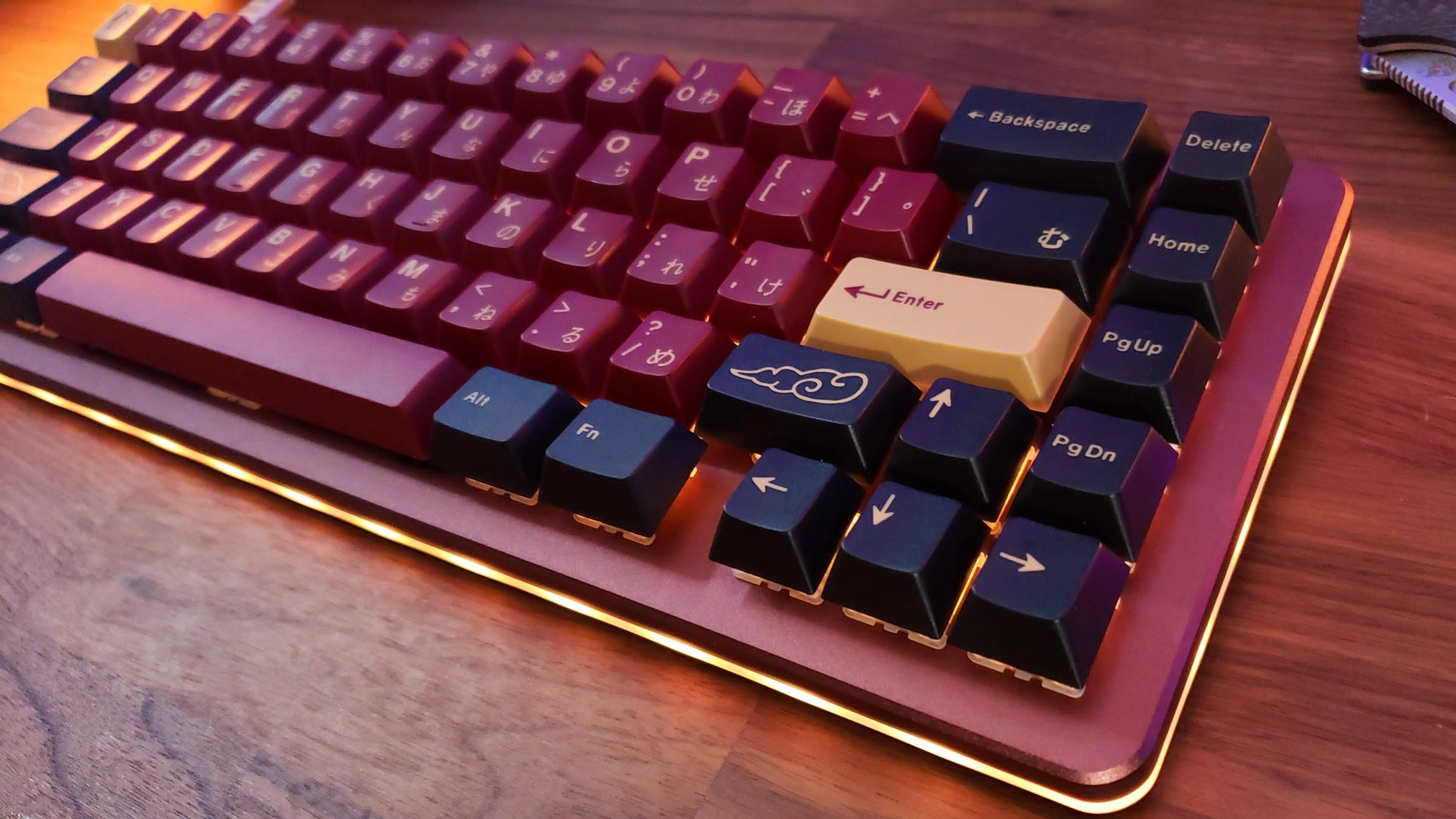 The product described in this article was provided by Drop for evaluation purposes.
Tags
Mechanical Keyboards
Peripherals