When it comes to audio quality and an immersive experience, the Steel Series Arctis 9 Wireless Headset has been widely acclaimed to set the bar on form and function. However, the Arctis 9 is a headset meant to work not just for the PC, but for the PlayStation 5, utilizing the systems’ 3D audio and Tempest Engine to make the virtual worlds we inhabit more immersive. It’s hard to sell audio fidelity as a premiere experience, but with the right games, the Steel Series Arctis 9 made me a believer.

If you’ve missed out on the features and performance of the Arctis 9, our review that hit late last year will undoubtedly answer any questions related to general functionality, features and comfort. As one of the few, but growing number of PS5 owners, questions remained as to what powers the next-gen consoles dedicated audio processor holds, and whether you really needed a Pulse 3D Wireless headset to unlock them.

In short, after several hours of shooting and web-slinging in various test scenarios, the Steel Series Arctis 9 once again proves that it’s an industry leading headset, but when it comes to the PS5 and 3D Audio, there are some caveats. Before we really get down to the dynamic audio and how it changes some of the games you’ll play, let’s rewind to the initial steps of setting up the Arctis 9, and how a little preparation can go a long way. 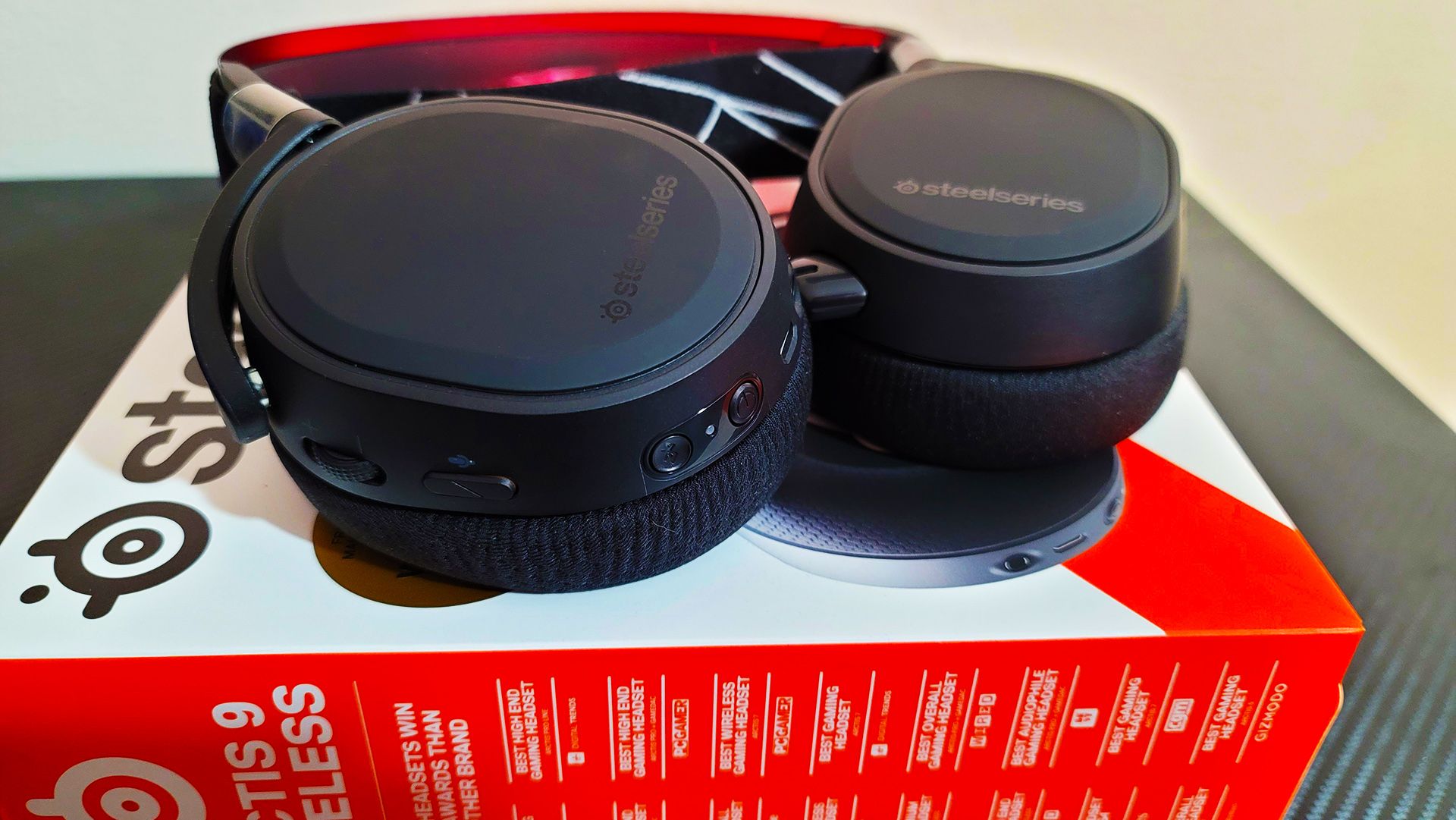 For starters, the Arctis 9 will require that you use a wireless transmitter setup in PlayStation mode in order for the headset to connect wirelessly. While technically you could utilize a 3.5mm cable to connect the Arctis directly to your PS5 controller (more on that later), you would likely want your initial setup to revolve around the use of the headset as purely wireless. Luckily, once the 2.4ghz transmitter is plugged in, the Steel Series will connect without having to pair it manually.

The next part of the setup is actually more focused on the software end – the PlayStation 5. 3D Audio is generally selected as default in the settings, but you may want to double check, as that isn’t the only option you may want to toy with before your immersive audio excursion. Under Settings > Sound you’ll be able to confirm that your headset is connect, enable 3D Audio, and actually change your 3D Audio Profile. This profile will essentially allow you to customize what your experience will sound like, after choosing one of several profiles. In most cases, you’ll hear a simple change of pitch, but the ability for a more resonant tone if that’s your desire is a nice touch. 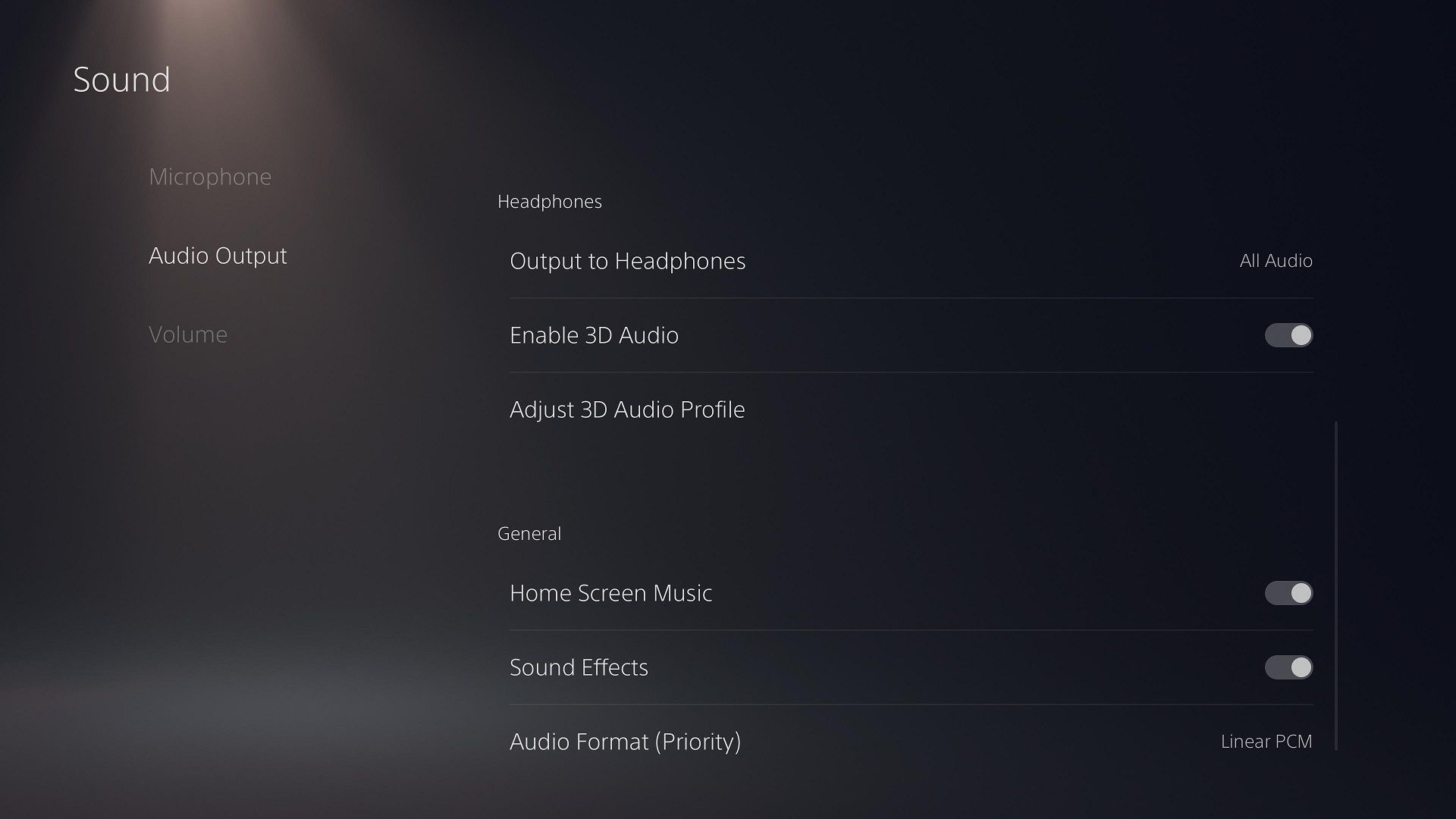 You have your headset ready to go, and now you’ve set it up to your personal preference. The only thing left is to choose your preferred game. You may ask, what games will work with 3D audio and the Arctis 9 Headset? It may surprise you when you find out, a lot more than you think. While there are particular games that tout their compatibility with Tempest Audio, the Tempest Engine will actually map an abundance of 3D games that support 5.1 or 7.1 surround sound to 3D audio. It is also important to note that the Arctis 9 is not specifically designed for Tempest Audio like the Arctis 7p is.

Fortunately, the Arctis 9 still performs exceptionally well when it comes to spatial awareness audio. I tested the game extensively with several titles. Two that really impressed me were Fallout 76 and Marvel’s Spider-Man: Miles Morales. Of the two, Miles Morales was the only one listed as releasing with full compatibility with Tempest 3D Audio. The Arctis 9 was able to coax out a lot of the immersive audio that is easily missed when playing on my TV and sound bar that supports Dolby Atmos.

Sure, you can hear the rush of the wind as you swing through the city, and the satisfying thump as you pummel some law-breaking punks, but what I didn’t expect is the call of birds flying beneath you as sit perched atop a high rise. This was actually compounded on ten-fold when I logged into Fallout 76. With my favorite haunt, Whitesprings, filled to the brim with ghoulish wanderers as normal, I took to the roof of the Golf House and crept towards some of the enemies rustling through the building. To my surprise, the audio was exceptionally accurate in depicting where exactly they were. 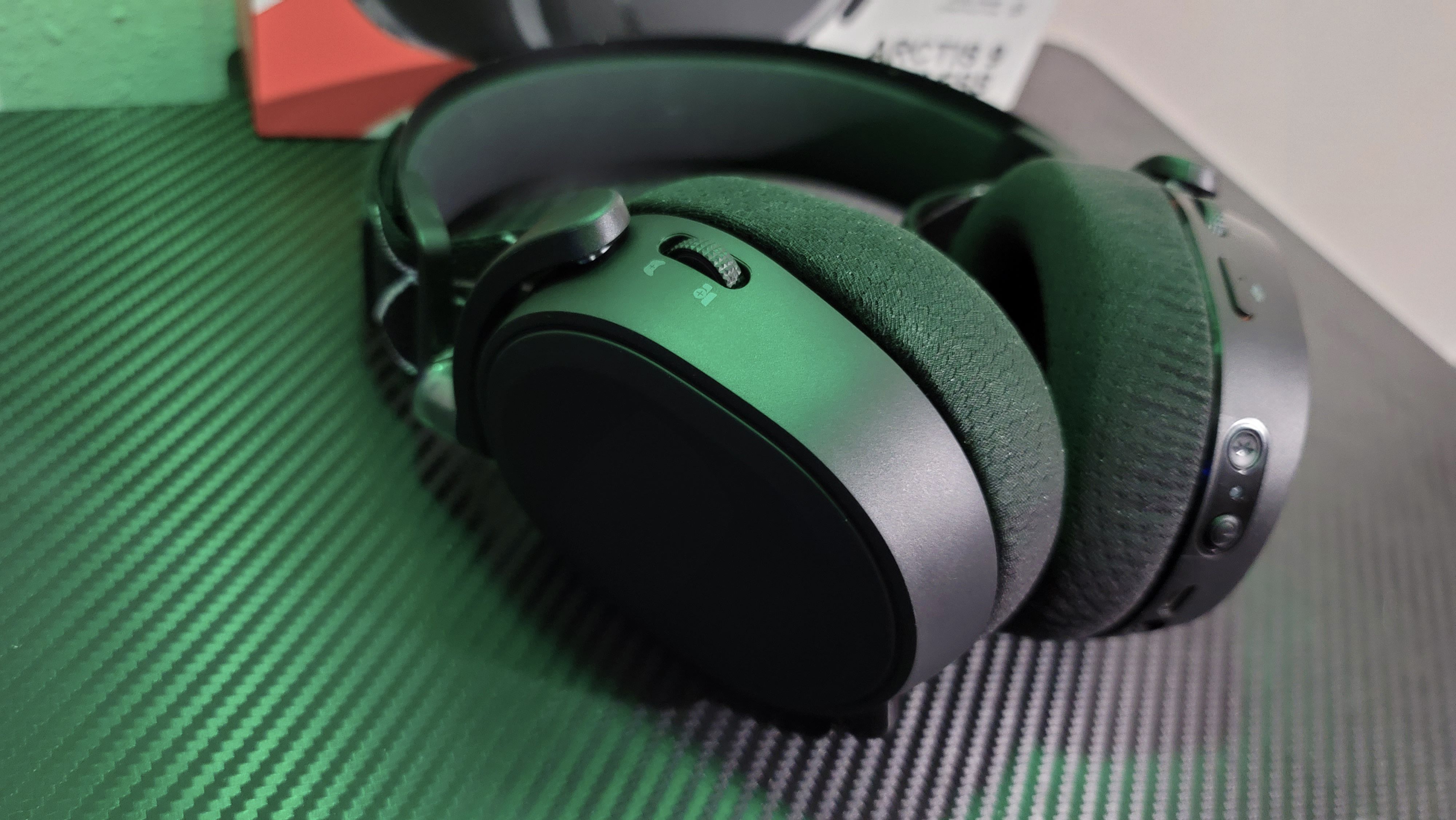 When I finally crept inside, and was eventually chased away by more than a dozen ghouls, I had a clear and horrifying mental picture of the ghouls chasing behind me. I could hear them to my left and right, and I could even hear them from below, charging up the stairs. The Tempest Audio system managed to turn a previously, run-of-the-mill ghoul slaughter into an exhilarating experience through the Arctis 9. While the ghouls themselves were more an annoyance than a valid threat to my Super Sledge wielding supremacy, the unease of hearing them surround you is a testament to what good audio can do for immersion.

The Steel Series Arctis 9 impressed me in a number of ways, but that doesn’t mean that everything was completely rosy. The Tempest Audio system is supposed to work while the Headset is connected to the 3.5mm audio jack as well as through wireless. In my testing, connecting a 3.5mm audio cable into the PlayStation controller did allow for 3D audio to a degree. The issue I experienced stemmed from the audio to seemingly not map correctly. Yes, I could still hear enemies in a dynamic spatial setting, but in most cases the sounds were faint, and harder to hear. Turning up the audio on the headset wasn’t enough to channel the same impact I received when playing with the Arctis 9 completely wirelessly. The issue was not experienced when I plugged the 3.5mm cable directly into the wireless received that was plugged directly into the PlayStation 5. 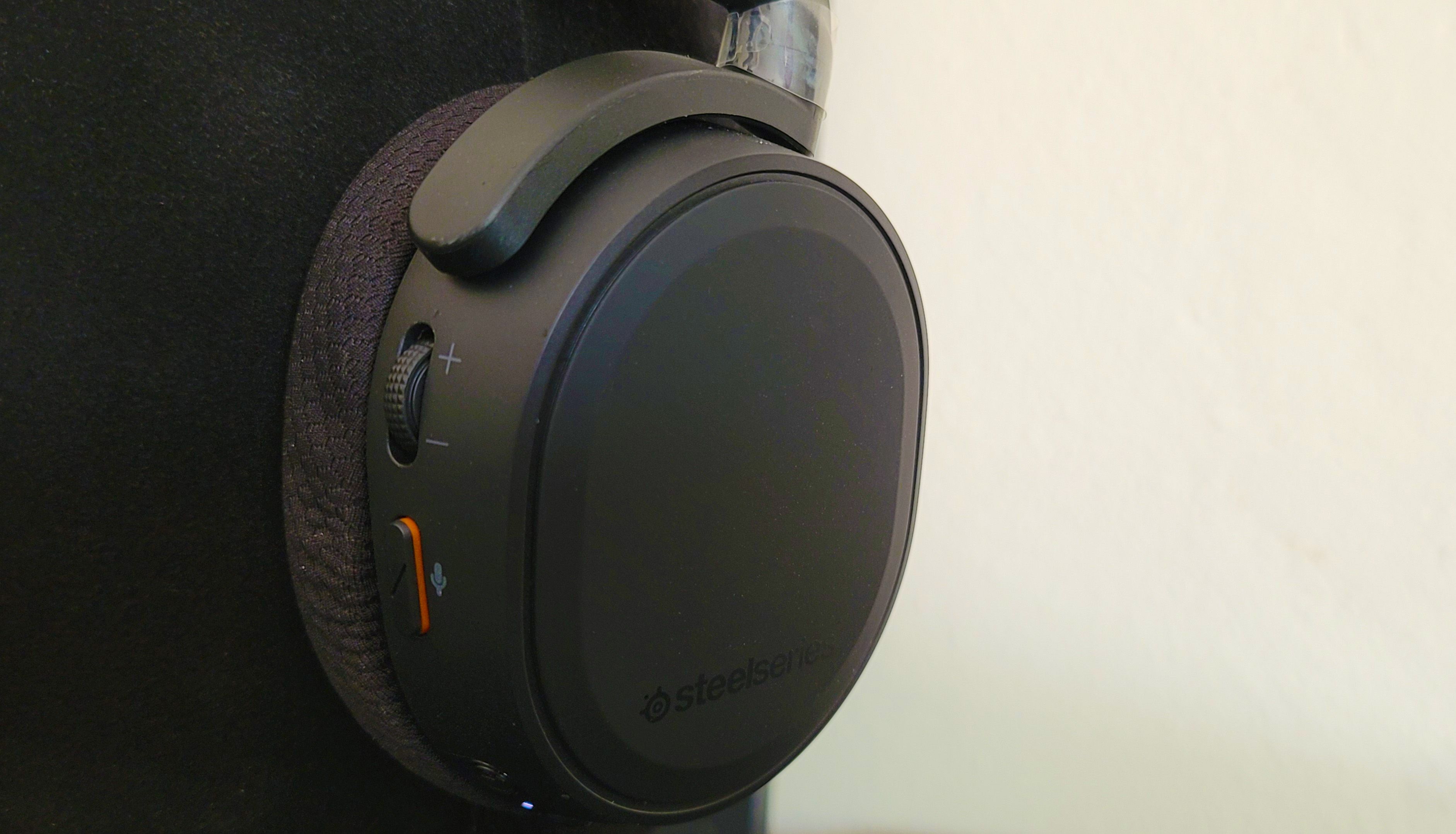 The Arctis 9 is a fantastic, full featured headset that manages to seduce the audiophile out of me, with the help of PlayStation 5’s Tempest 3D Audio. There are few games that fully make use of Tempest 3D, but the engine, when coupled with the right headset, makes a great case if you’re looking to enhance your audio experience. The Arctis 9 currently retails for $199.00 right now, while the Arctis 7P (if you can find it) will run you about $150.00 directly from Steel Series. While these are both slightly more expensive than the Sony Pulse 3D, which is built specifically for the PS5, owning an award-winning headset from Steel Series shouldn’t be overlooked when you’re looking for something that will last for hundreds of hours of gaming. Steel Series has definitely made me a believer.