At the outset of EVO 2022, this year’s major offline fighting game tournament here in Las Vegas, peripheral company Victrix announced a revision to their outstanding Pro FS fightstick. Notably, though, they announced a new contender to bring to the ring, reminiscent of the stickless pads that had started to dominate the pro scene: a 12-button, stickless…erm…fightstick.

Dubbed the Victrix Pro FS-12, this new offering from Victrix retains the look and feel of its iconic fightstick that has catapulted into the hands of some of the FGC’s top players. Using the same methodology of creating the highest quality pad with no compromises, the new  Pro FS-12 utilizes the same machined chassis as the Pro FS, iconic Sanwa Denshi buttons and switches, and an updated PCB that allows the stick to work on PS5, PS4, and PC with the flip of a switch. And, to the relief of fans everywhere, X-Input support.

As to why the team has decided to release a pro model of a stickless fight pad, Victrix’s Director of Product Development, Trevor Lehr told us at EVO effectively, why not?

“People have been wanting this for a long time,” Lehr says about the Pro FS-12 at EVO. “They love the layout, they want our build quality - our metal and all of that. So I think we’re just happy it’s finally here.” 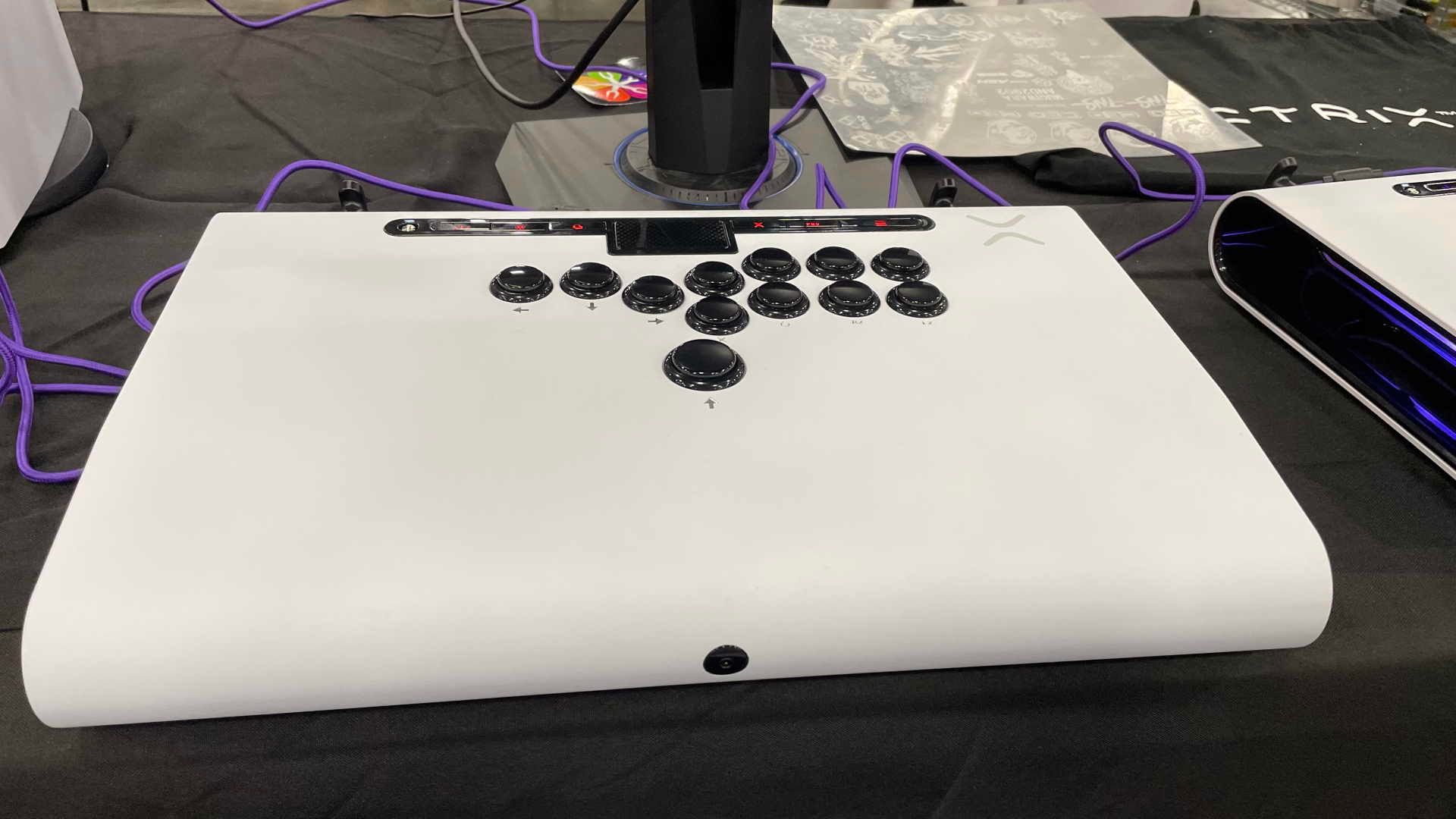 As to why this layout is getting more popular in the FGC, Lehr chalks it up to the fact that, for many, it’s simply more ergonomic than a traditional arcade stick. It also helps that many pro players have adopted the layout, most notably Street Fighter God Diago Umehara, and this year's Street Fighter V Evo Champion, Kawano.

“It’s a new way to play. I think it’s more ergonomic, you’re not making wrist motions.It’s just better [for] faster inputs. I still think that the joystick is going to live on forever just from the psychology from a traditional arcade.”

I have to agree, personally. Sitting down to play Guilty Gear Strive for the first time ever, I hopped on the new white finish Pro-FS (Which the PR images Victrix dropped will never do how beautiful this thing is in person justice). Getting used to the fact that the inputs for up and down are swapped  - the idea being that you can use the up input as a “spacebar” style input to jump with either thumb - I have to say it’s hard to go back to a traditional stick.

Complicated inputs, such as reverse sweeps which I struggle with all the time on a stick, were rather easy to consistently pull off once I got used to it. Honestly, it felt like typing, which comes as naturally to me as breathing at this point. I lost the first match, a warming-up period, if you will, but got the hang of it about halfway through our second match.

Being able to pull of anti-airs quickly, following up with quick punishes and combo strings of my own seemed to come easily once I got used to the lack of a joystick. Buffering commands, something I can never properly do on my regular Pro FS stick, seemed easier as well, allowing me to string together combos once I learned them.

It helps too that the Pro FS-12 uses the same body as the standard Pro FS. Victrix have built a comfortable, sturdy stick that feels great to use, and, thankfully, doesn’t cut into my arms like the hard corners of a Qanba or Razer stick.

The Victrix Pro FS-12 retains all the same modularity as the standard Pro FS, meaning players can swap out the switches, buttons, and more to whatever they feel, and it’s going to be rather straightforward. I do find it funny, though, that inside the chassis the company still has a slot for a joystick to be stored on a joystick-less pad.

The Pro FS-12 also screams quality just like the brand has come to be known, whether its its fight sticks, gamepads or headphones. The finish options - either a powdered white or the Victrix purple - both look outstanding and feel 100% durable, something that is key for a product that is going to come into contact with arms and hands covered in sweat and body oils over the years (FGC events can get intense - and hot when they are in a desert, okay?). The subtle slope of the stick itself makes it so easy to hold and the weight keeps it firmly placed on the table or in my lap.

The Pro-FS isn’t just being left in the cold here, though, in favor of the new button-only layout. The Pro-FS itself is getting the same under-the-hood upgrades as the new stick, with an improved PCB, native PS5 support, and more. It’s also being sold in the new finishes as well, giving more options to potential buyers should they decide to drop the $399 on the stick (also the price on the new Victrix Pro FS-12). 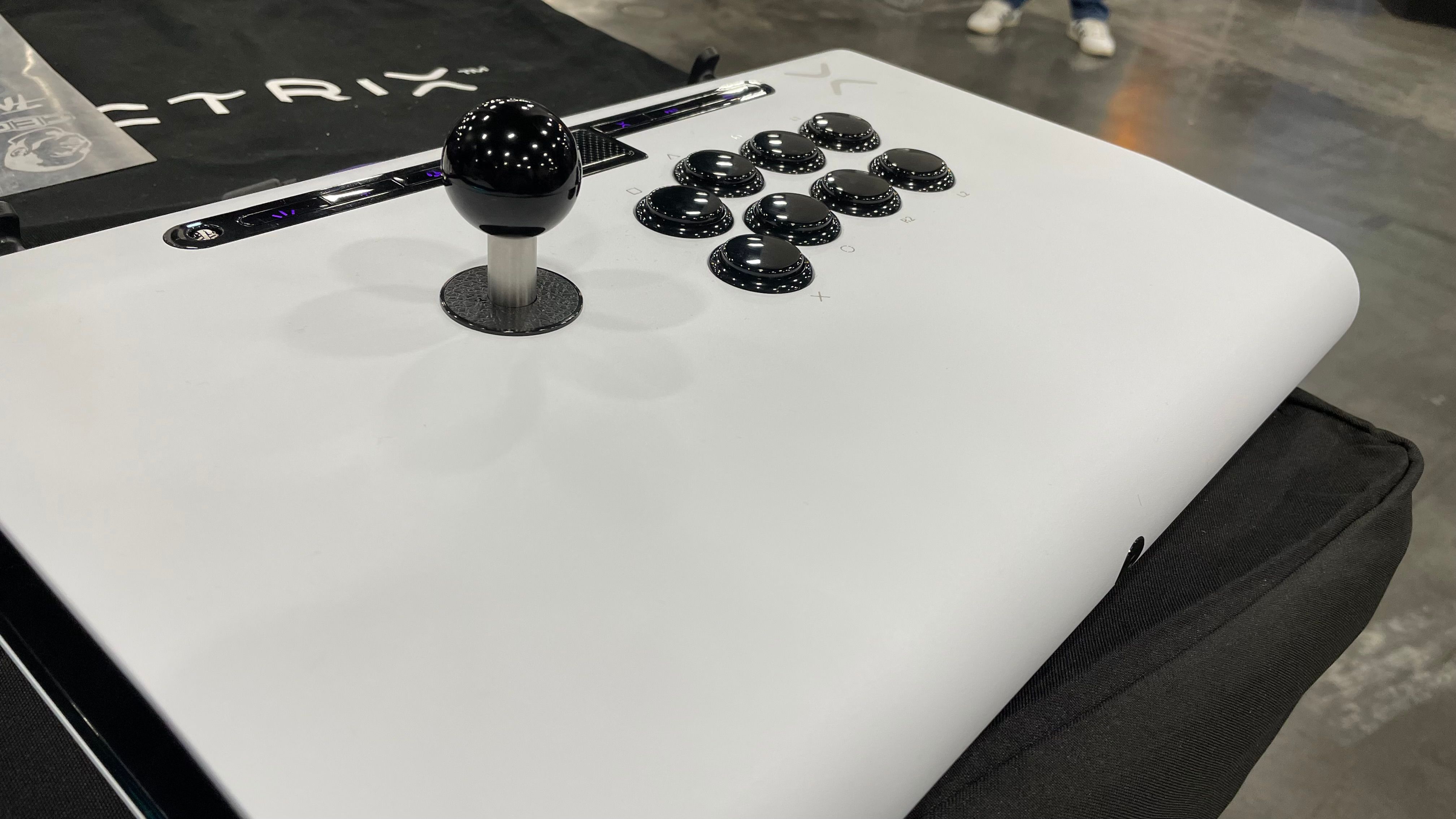 Another Victrix stick caught the eye of pretty much every EVO attendee and viewer: the gold Pro FS sticks the team brought to the show. These were absolutely beautiful to behold, made even more unique when you consider the team has created a limited run on them. Twenty-seven of the sticks were handed out as trophies to the top three placements in each of the main tournament games throughout the weekend. It’s an interesting opportunity, one that Trevor states Victrix just couldn’t pass up.

“It’s EVO, we’re back. We’re happy to be back. It’s a new PS5 stick for us and we just wanted to partner with them. And it’s great, they only do it every five years or so. The last one was in 2015. We have the new stick, just announced on the day here. So it just made sense to work out this partnership with them. There are nine games, and twenty-seven gold sticks. They’re going to be handed out to the winners. They each have the game logo engraved and then “Champion” under it.”

The stick is beautiful in person. The team even made a gold stick to use at the show, which for some reason they let me touch. I was so afraid of scratching it, damaging it - yet I won my match on it, so maybe it’s good luck.

I kept coming back to the Victrix booth throughout my time at EVO 2022, and came back the next day with my daughter (who was cosplaying as Jiro from My Hero Academia, so already having a stellar time). Who knows too, given how badly my kid beat me down in Tekken 7, the Pro FS-12 may make you better too?