The new RTX-30 series GPUs require a lot of power. In fact, the recommended power supply for the Founders Editions tops out at 750 watts. If you’re also planning on a high-end CPU and other components to flesh out your system, that may not be enough. That’s the case I found myself in. In this article, I’ll be sharing why I decided to upgrade and help you understand whether you should as well.

First things first, knowing whether or not you have enough power doesn’t begin and end with the recommended power supply provided by Nvidia. At the top end, Nvidia recommends 750 watts for its own Founders Edition cards, yet, there are two things to keep in mind with that. First of all, the cards won’t be drawing that much power on their own. The 3090 is only specced to draw 350 watts and the RTX 3080 even less at 320. The flipside to that is that how much power either card draws depends on what you’re doing at the time, whether you’ve overclocked and adjusted the power limit, and, if you’re using an aftermarket card, how much additional power that model is going to draw for it’s own factory overclock.

And let’s be honest, TDP isn’t something you should place a lot of stock in anyway. Companies have a tendency to downplay the electricity requirements of their cards. Instead, you should put your system through a reputable power supply calculator to get a better idea of how many watts you will actually wind up needing. And then, if you’re like me, overshoot slightly. Headroom, to a degree, is a good thing and provides room for expansion so long as you don’t go overboard (power supplies can be less efficient if you’re using them far under their rated spec).

As a tech enthusiast, I like to keep a powerful PC. That by itself wouldn’t necessarily require that you upgrade your power supply if you’re already running 750-watts. It’s when you start pairing components that things get dicey. With the upcoming Ryzen 5000 series hitting the market soon, that may describe you. And, if you're like me and go overboard on RGB, each of those LEDs add up.

In fact, you might recall the PC I’ve been using from my RGB Overkill PC feature. Since that time, I’ve upgraded it further, bring me to a spec list that’s something like this: 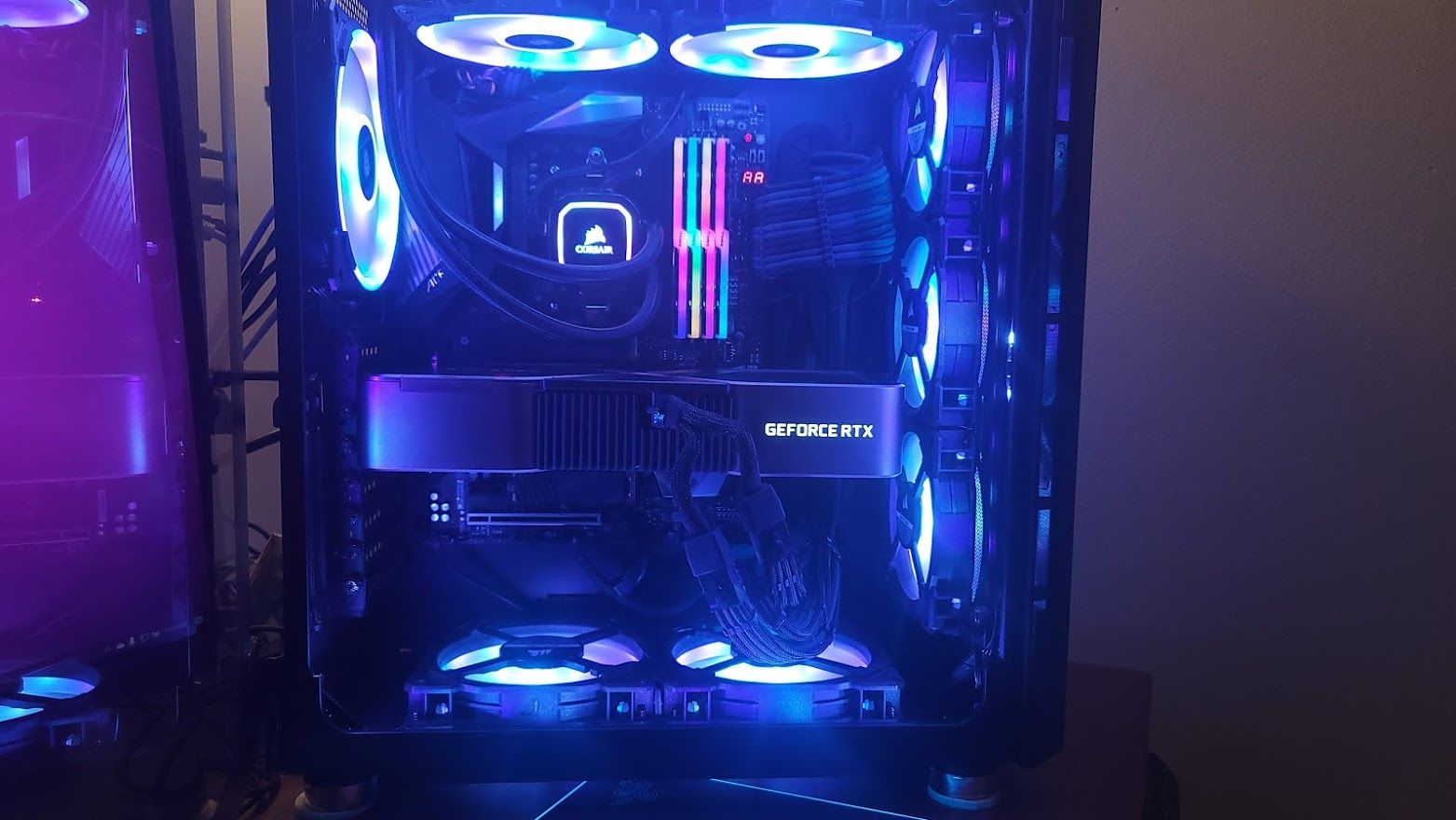 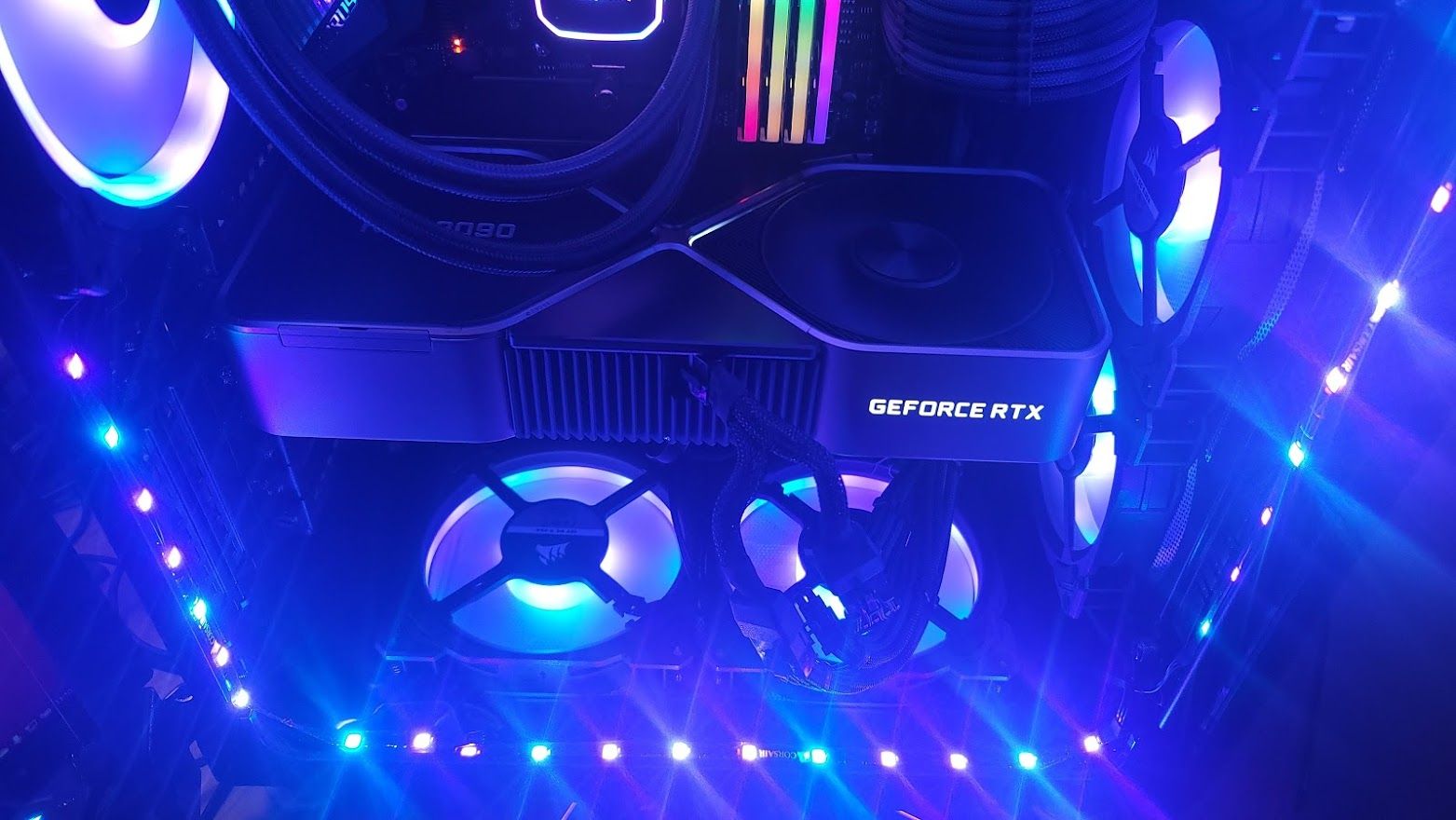 They say a picture is worth a thousand words, so here’s two. All told, this system is powering 216 addressable LEDs, which substantially increases power draw. Add to that a dozen USB devices, including another 150 or so LEDs with the RGB keyboard, mouse, and mousepad.

I’ll be honest — I really didn’t know how much extra power all of this lighting and connectivity was going to draw, so I reached out to the experts at Corsair to see if my prior 850-watt power supply was going to cut it. The answer was maybe.

Given the overall cost of the components inside the machine, I wasn’t comfortable resting on a maybe, and neither should you. The power supply is one of the most important components in your PC and skimping on it can have disastrous results. I know from personal experience: the first PC I ever built used a bargain-basement PSU that lasted a month before repeatedly shutting down my PC. I can only figure that before it shut down, my components experience some kind of brown out. Another two months later, that same power supply shot sparks out the back of it when my friend asked to use it in a budget build (we were new builders and didn’t know better). We were both lucky our systems didn’t get destroyed.

The first power supply I bought after that experience was a Corsair 650-watt to power my BFG GTX 260. I never had another issue and have used Corsair in every personal PC I’ve built since. In fact, I have the HX1050 in my Intel machine right now running the i9-10900K and an RTX 2080 Ti. In the six or so years since I bought it, it hasn’t hiccuped once. Seeing that I was planning on buying one in the middle of price gouging season, Corsair offered to send me one to power my new build. 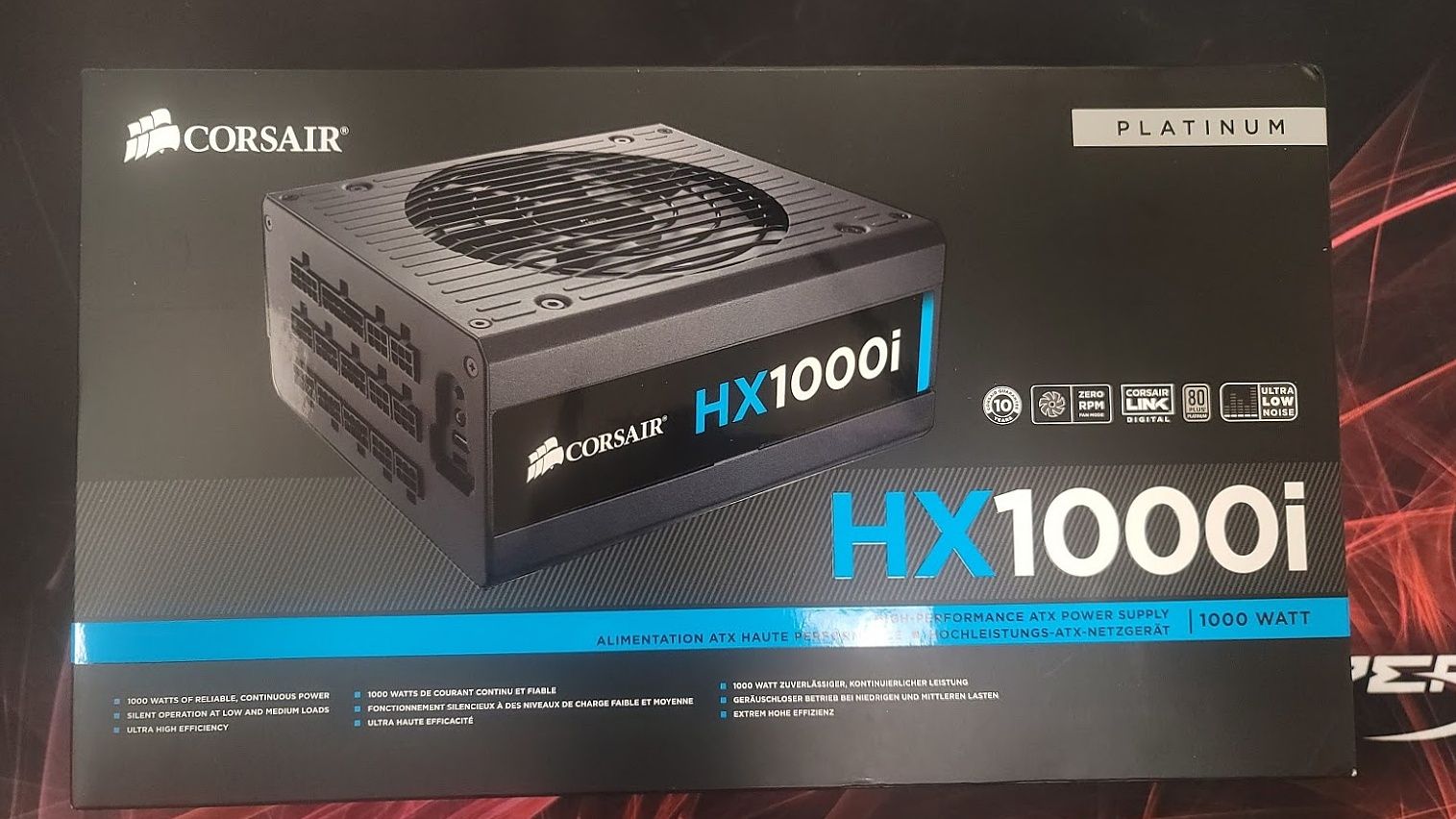 And look what arrived, the new version of the exact PSU I’ve been using for so long. The HX1000i takes everything I liked about the original and adds onto it. I’ll break down why this is the exact model I was looking at, but first here’s the spec rundown: 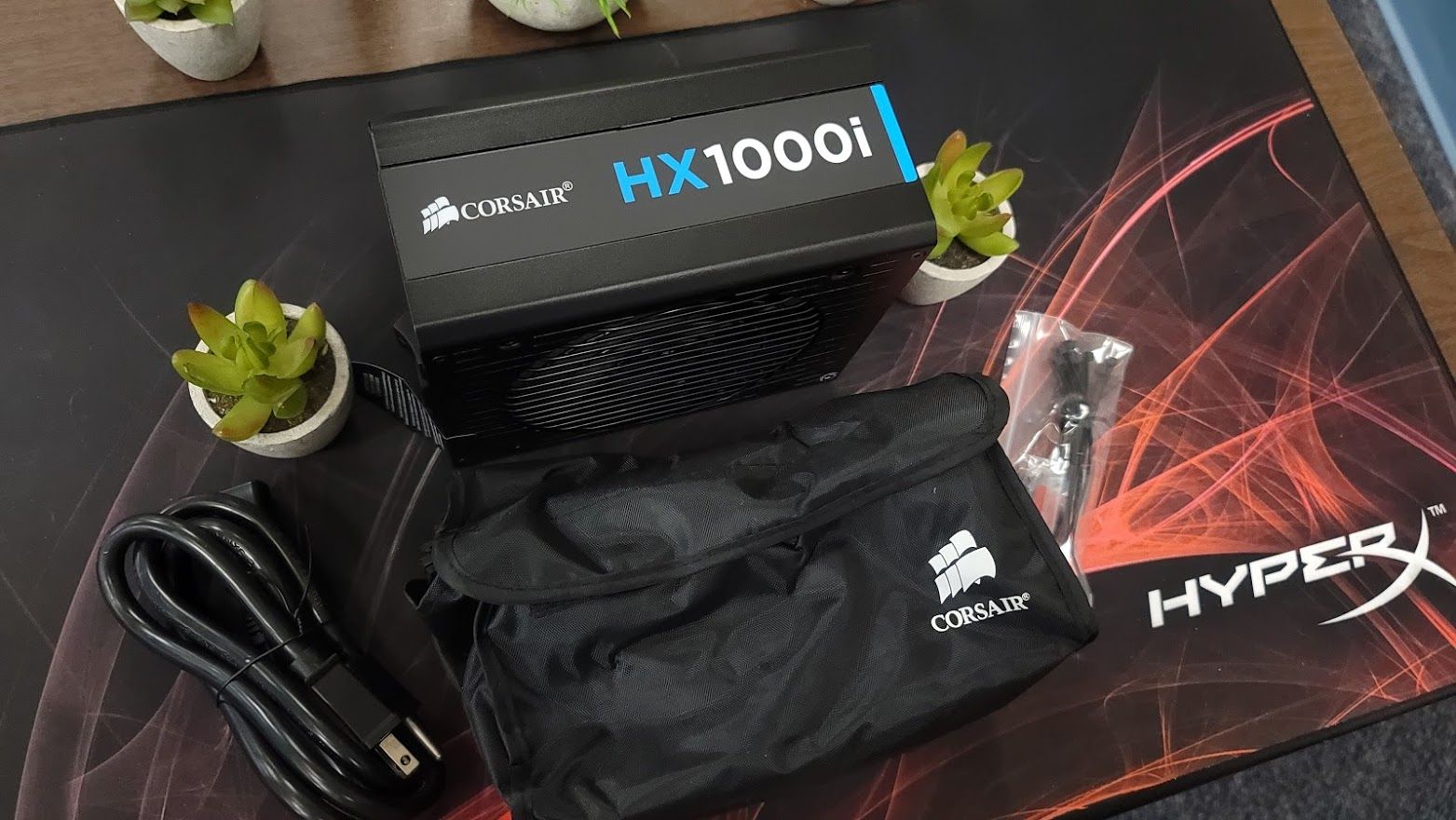 So, compared to the original, then — which is also what I really like about it. Number one: it’s fully modular. Even that 24-pin is a removable line and each and every one of them is low profile for easier routing. Even compared to a semi-modular power supply, fully modular is nice because you can remove any power line you’re not actively using, which makes system building faster and cable management easier, leading to better-looking builds. 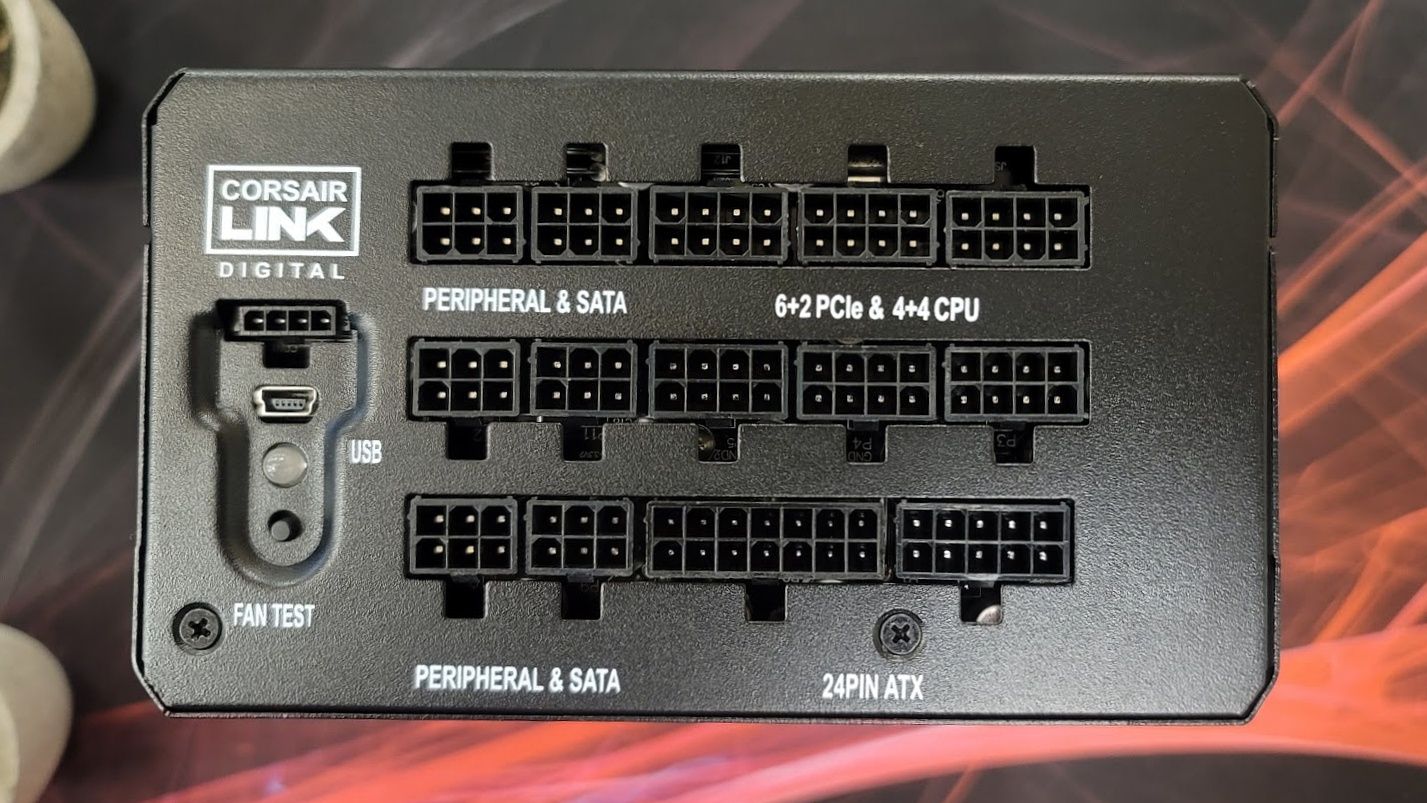 Next, it’s now Platinum rated instead of Gold. This means its power delivery under load is more efficient, leading to less wasted power. Returning to my earlier point about not buying a power supply that way over target, the HX1000i runs at about 93% efficiency at 50% load. At a full 1000-watt load, that efficiency only drops to about 90%, which means that gaming is going to land right in the sweet spot for efficient power delivery. 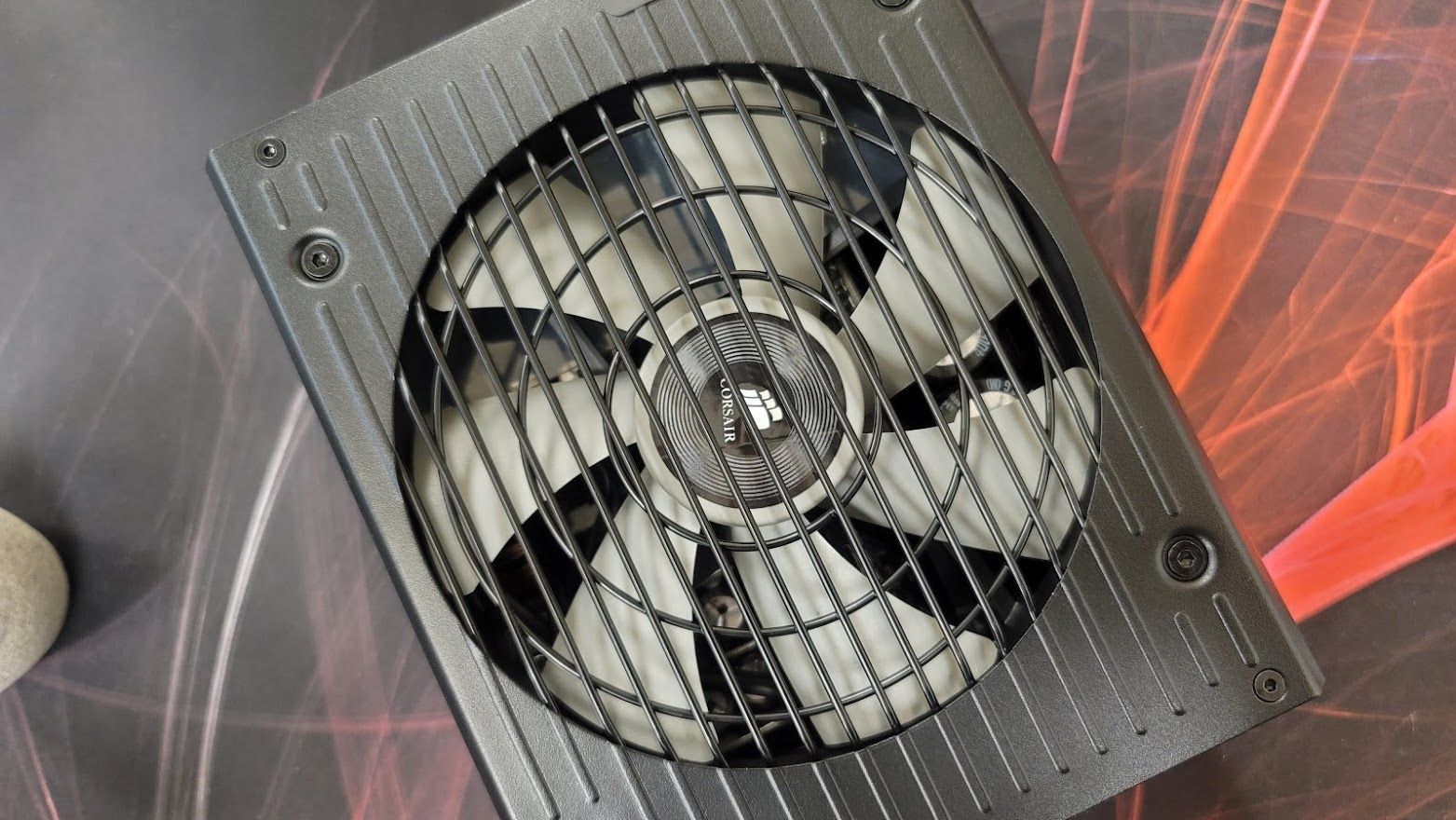 This model also features a very quiet fan with a zero-RPM mode. At anything under 400 watts, the fan won’t spin up at all. Above that, it has a gentle ramp all the way up to 1000 watts where it peaks at 24dB. At that level of power draw, it’s likely that every other fan in your PC will be at full blow anyhow and you won’t hear the HX1000i at all. 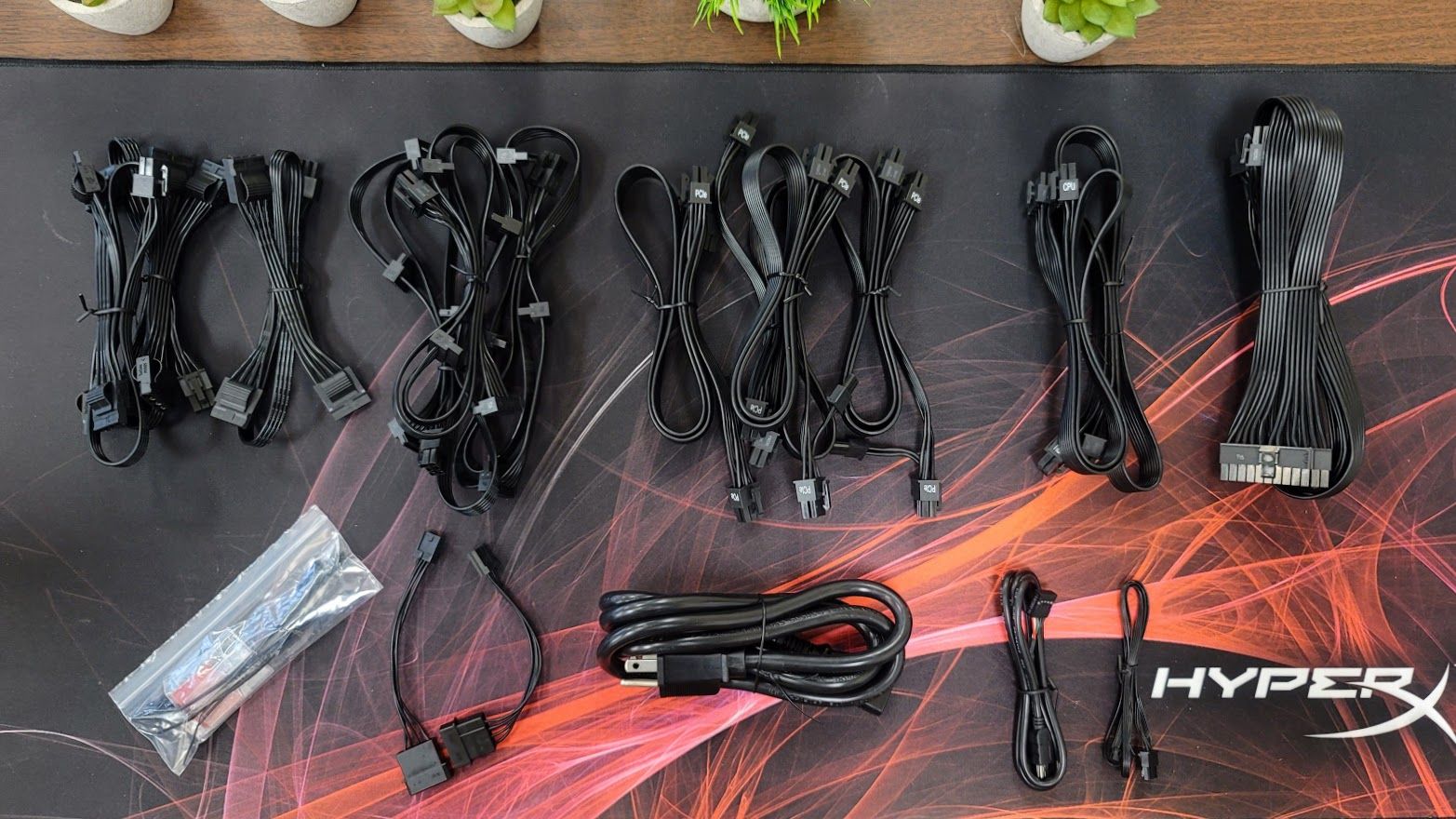 It also has smart features - hence the “i” in its name. After connecting it via USB and to Corsair’s digital interface cable, you’re able to monitor the power delivery of your system in real time. You’re able to view power delivery across its different rails, output, enable single or multi-rail mode, enable/disable Over Current Protection, and adjust the fan speed. While I don’t like having to connect another device to an internal USB header, I appreciate being able to see my power draw and efficiency.

Most importantly, it has a 10-year warranty. Ever since that first experience where the cheap power supply died and nearly took out two systems with it, I have been extra conscious of warranties and ten years of protection is a solid reassurance when connecting it to thousands of dollars of equipment.

Back to the original question: do you need to upgrade your power supply? If you have a reasonable gaming rig and have at least 750 watts, probably not. I’m in the unique position of connecting lots of gear in addition to running power-hungry gear. Do yourself a favor and run your rig through the OuterVision Power Supply calculator. If you’re coming close, it’s time to upgrade. If you do, Corsair has served me well for most of a decade. But whether you buy the PSU I used or any other, don’t cheap out. Your PC will thank you.