Previously, I discussed the very beginnings of playing MMOs on Valve’s new Steam Deck. The portable PC definitely has some potential, which will explore more in-depth at a later time, but one area where millions of people play games, including MMOs, are already built-out ecosystems.

Yes, I mean our phones.

Mobile MMORPGs come in all forms, from auto-battlers that require little to no input from the player, to fully mobile versions of PC MMOs and RPGs. While these games are optimized for touchscreens, making controlling them pretty simple, what if you wanted to expand beyond that and have a more console-like experience in the palm of your hand?

With the advent of streaming services as well, such as Nvidia’s GeForce Now, Xbox’s Cloud Game Streaming and even Google Stadia, there are new ways to play full, fat MMORPGs in the palm of your hand.

The question is what is the best way?

We’re taking a look at a few options in this article, from the Google Stadia controller to bespoke controllers made for phones such as the Razer Kishi and Backbone One

While Google Stadia looks like it’s not doing to well, the controller itself is not actually terrible. Since launch, the controller has become compatible with iOS and Android devices wirelessly through the Stadia app, which makes functionality a bit easier.

Playing Stadia, though, is still hit or miss depending on your connection. I found playing The Elder Scrolls Online to be a mostly enjoyable experience at first, though only when I was connected to a strong WiFi network. If you’re on the go, you won’t be able to take advantage of the wireless connectivity of the Stadia controller unless that controller has been previously connected to the WiFi separately. 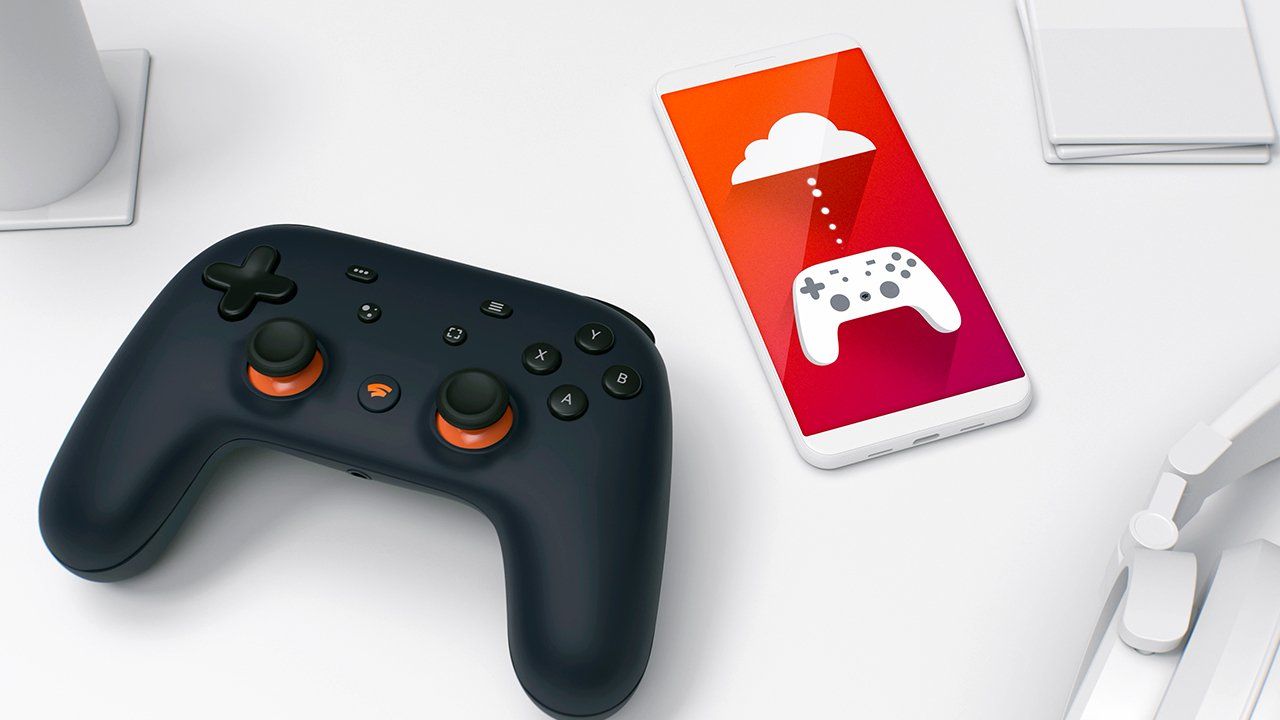 This makes it a bit of a hassle to connect to the phone unless you can do a wired connection, which on an iPhone isn’t an option thanks to the USB-C connector the controller requires.

The size of the controller also makes it a little bit of a hassle, though it’s still portable. However, I found it cumbersome to pack easily when heading to my parent's house for an afternoon or to a coffee shop to enjoy gaming out of the house for a little while.

It’s also a little cumbersome since the controller only really works on Stadia’s app. I can’t, say, play Genshin Impact or Black Desert when streaming using GeForce Now, at least on iOS. It limits the options you have when opting only to use the Stadia controller as your input method.

Thankfully, many controllers have Bluetooth. 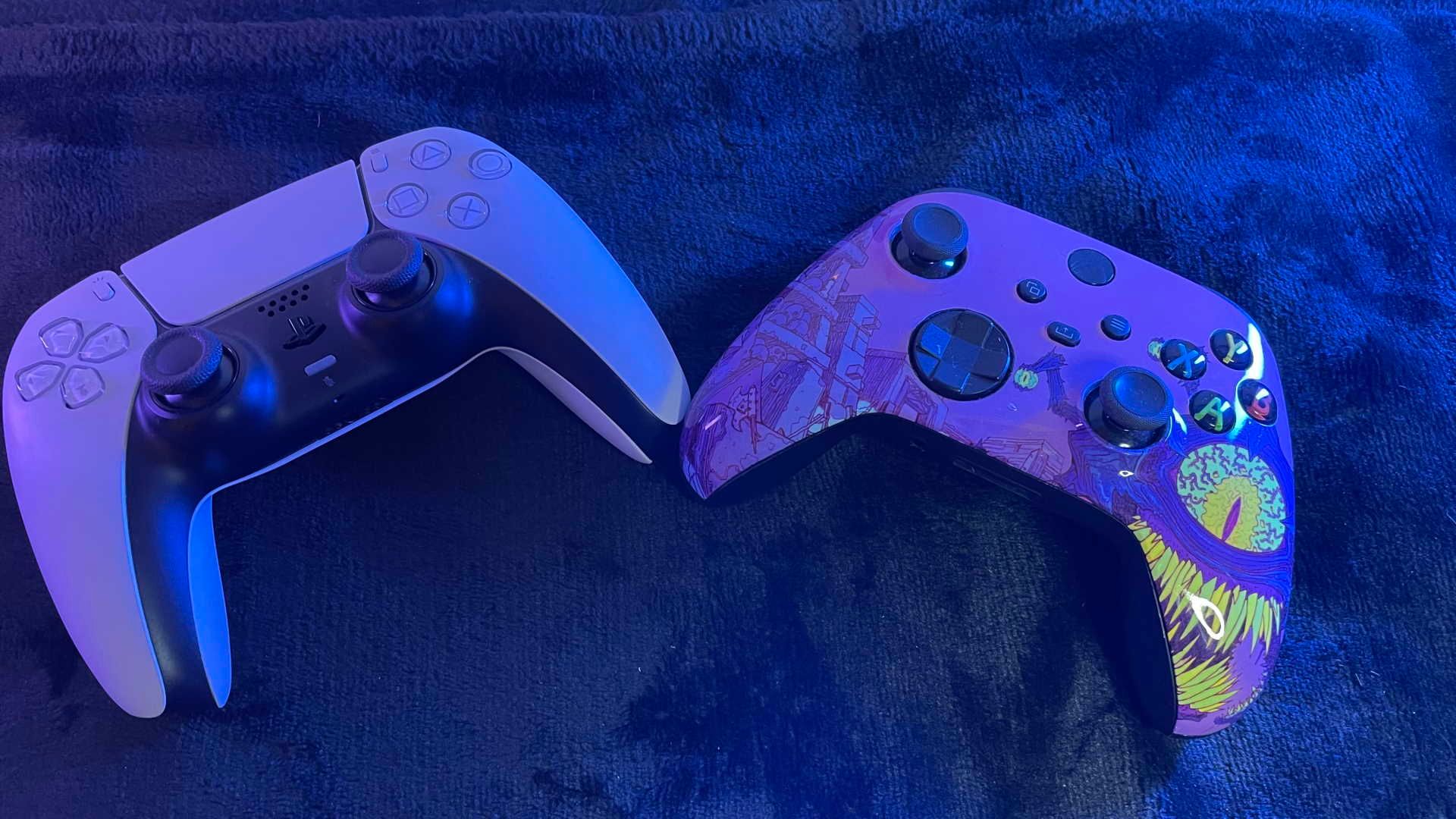 These options are available to the vast majority of players out there relatively easily. PlayStation’s Dual Sense (as well as the Dual Shock 4) sync easily to both Android and iOS devices, with Xbox’s controllers also sporting Bluetooth functionality. Thankfully too, these controllers are simply relegated to a single app, but work in games with native controller support, as well as when using one of the various streaming apps available to players.

Playing ESO on my Xbox Game Streaming app with the Xbox controller while at a coffee shop was a pretty cool feeling, as well as being able to check in with my Steam Library using GeForce Now with the Dual Sense. Even Stadia supports these other controllers, unlocking that whole library to a better experience than touch screen controls.

Unfortunately, these also have the same issue as the Stadia controller – it’s not the most portable of devices. Sure, they are small, and even my Xbox Elite 2 controller comes with a case. But they can be cumbersome to transport and without a controller clip to hold the phone, it’s a little hard to use easily.

Razer solved this issue to a degree by creating a setup that reminds one of the Nintendo Switch. Hooking up their Kishi controller is rather simple, though you’ll need to ensure you have the correct one for your device. Since I use iPhone, I actually had a hard time finding the Kishi in my local electronics store. More often than not I was finding the Android version.

I was able to snag one for $99 on Amazon, and within a day it was in my hands, ready to go. The Kishi requires no real setup: just insert your phone and launch the game you want to play.

The controller is laid out like an Xbox One controller with offset thumbsticks (I actually hate inline sticks, so this worked out beautifully). Each button is easy to reach as well, making it feel rather comfortable while playing. The Razer Kishi expands out to fit your phone as well, making it easy to use whether you’re sporting an iPhone 12 Mini or an iPhone 13 and so on. 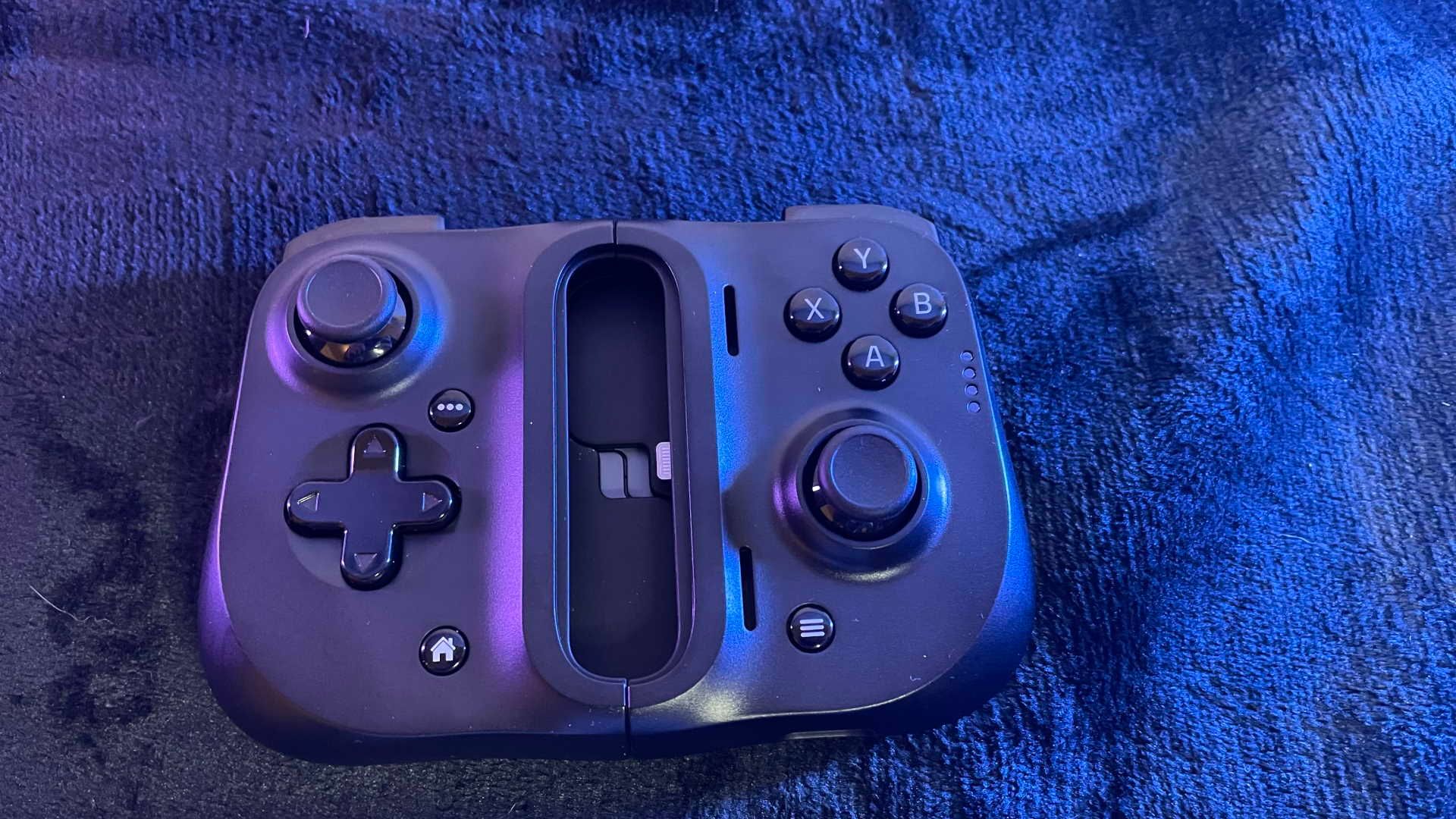 One plugged into the phone iOS immediately recognized the device and it was functional in any game I threw at it – provided the game also had controller support. MMOs like RuneScape weren’t good fits, but thankfully streaming Warframe using Steam Link worked like a charm. Genshin Impact also works with this controller, though you’ll need to reenable controller support in the settings menu each time you launch the title.

There is an iPhone app that checks to make sure your firmware is up to date, though it’s lacking some of the features of its nearest competitor, the Backbone. You can’t launch games, check compatibility, and more through the Razer Kishi app – it’s simply a firmware updater.

I do appreciate that there is a charge-through port on the bottom of the controller. However, I also wish there were a headphone jack, giving people another option other than Bluetooth headphones.

All in all, the Razer Kishi is a good option if you want a straightforward mobile controller to play your favorite MMOs or RPGs on the go.

The Backbone One is probably my favorite way to play on this list. It’s also a controller that turns your phone into a mini-Switch, with the gamepads on either side of the device. It has both a charging port as well as a headphone jack for those who want the option.

First of all, the Backbone One has incredibly clicky face buttons, something I love in a small form factor like this. The DPad leaves a lot to be desired, unfortunately, as it’s incredibly mushy and doesn’t feel precise at all. However, the shoulder and triggers are snappy and responsive, which for many titles is more impactful than a mushy DPad.

The Backbone is compatible with pretty much any app on the store that supports controllers, and the Backbone One app also provides compatibility information to ensure that you know going into a download whether or not it will work natively. It also works beautifully with every major streaming app, from Stadia to Amazon’s Luna. Playing Cyberpunk 2077 on Stadia with the Backbone felt incredible, each shot of my pistol feeling snappy and precise. Running around Black Desert on Xbox Cloud Streaming felt really natural as well, the controller perfectly comfortable in my hand. 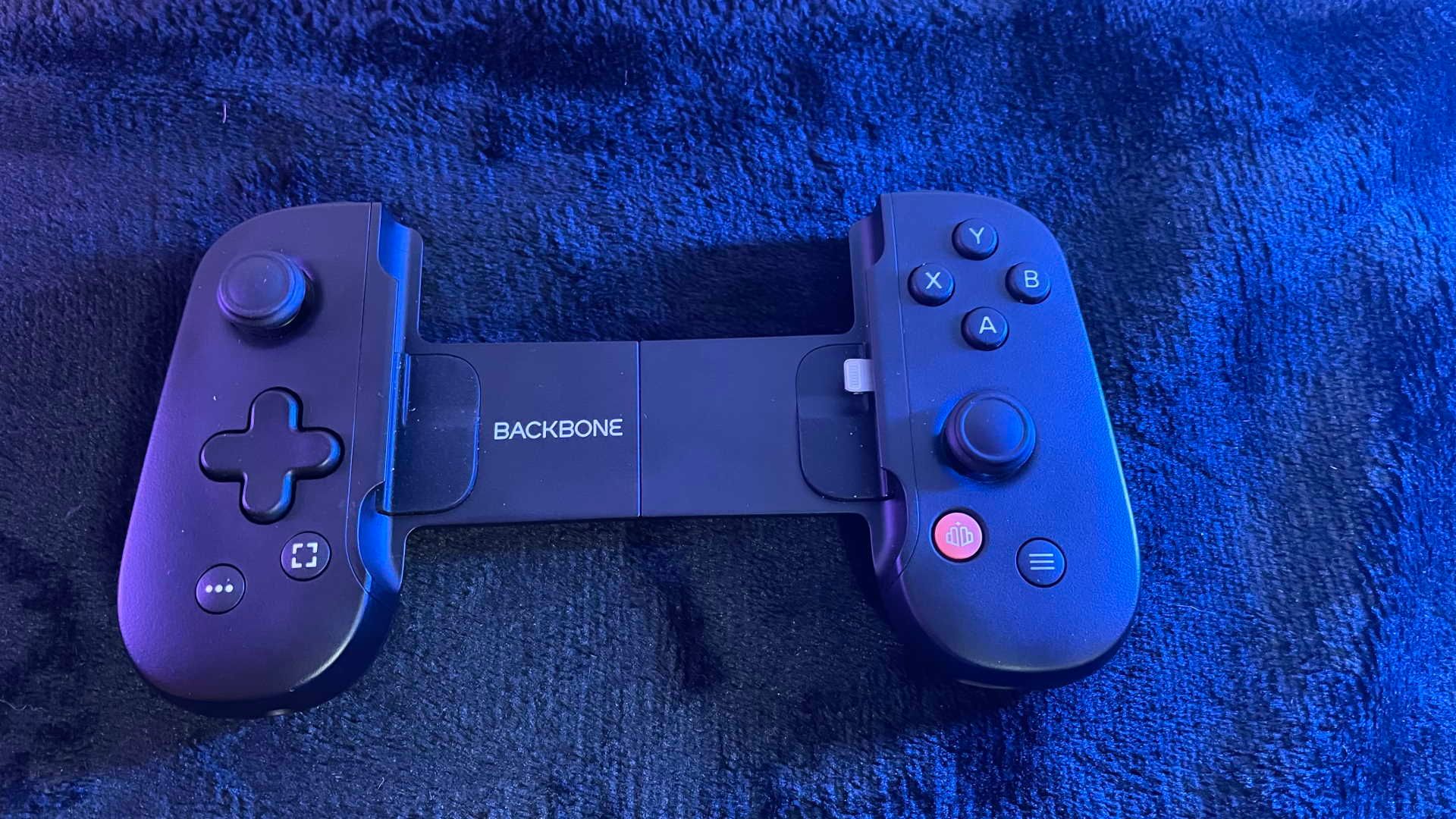 However, the device comes into its own with the Backbone App. Providing a full library of games to explore across all the supported apps (whether the app is installed or not), the Backbone app gives plenty of options for those who are looking for them. Additionally, each Backbone One comes with a year subscription to their premium service, Backbone+. This service gives features such as the ability to capture, edit and share gameplay using the Backbone itself, the ability to party with friends who also have the Backbone One controller, and much more.

Being able to quickly take a screenshot with the Backbone helps as well. Instead of having to grab the phone by the sides and screenshot like normal, there is a dedicated button on the controller. This can also record gameplay to edit and share later. Additionally, the Backbone can connect to Twitch, allowing you to easily stream your gameplay to the service, assuming that’s what you want.

At the same price as the Razer Kishi, it feels like a better deal (though I have seen the Kishi for less than its listed MSRP in stores, so your mileage there might vary). The device itself feels incredible to use, and the suite of features makes it much more than a simple game controller for your phone. Assuming you like how it feels, you can also hook this up to an iPad or even your PC and use it as a regular controller there, assuming you have a USB-C equipped cable.

Each one of these options will work as well. It really just depends on your use case. Simply playing Stadia? That controller is just fine, especially now that it works wirelessly. Regular Xbox and PlayStation controllers are always great, as are aftermarket Bluetooth controllers. Personally, though, I find myself leaning towards either the Kishi or the Backbone One, and between the two of them, the latter is my go-to right now.  No matter which way you go, though, it’s never been easier to play full MMOs and RPGs on your phone without the need to struggle with clunky touchscreen controls.

Left off this list are two of the most obvious ones: the newly released Steam Deck and the Nintendo Switch, though the latter is a bit scant on MMORPGs. However, we’ll explore those in a separate article more in-depth next week.