One of the most exciting features of the now-current generation consoles like the Xbox Series X|S and PS5 is their inclusion of SSDs. With Firmware 2.0 for the PS5, we now have the ability to install third party M.2 drives. And, well, I did exactly that.

Sony in particular put in considerable engineering effort towards creating a super-fast SSD with a custom controller resulting in a blistering 5.5 GB/s (that’s gigaBYTES) bandwidth. The result is experiences which simply cannot be attained on platter disk drives like those found in old PCs and notably the last generation consoles. Ratchet & Clank Rift Apart is a brilliant example of what this storage technology enables in terms of both visuals and gameplay.

With the release of Firmware 2.0, Sony made it possible to install third party M.2 SSDs as long as they meet a minimum set of requirements. Today, we’re taking a look at the Adata XPG GAMMIX S70 BLADE SSD which Adata explicitly states, “Works with PS5”. I’ll show you how to install a new SSD in your PS5, and we’ll also take a look at some benchmarks.

First up, here are the specs of the Adata XPG GAMMIX S70 BLADE SSD: 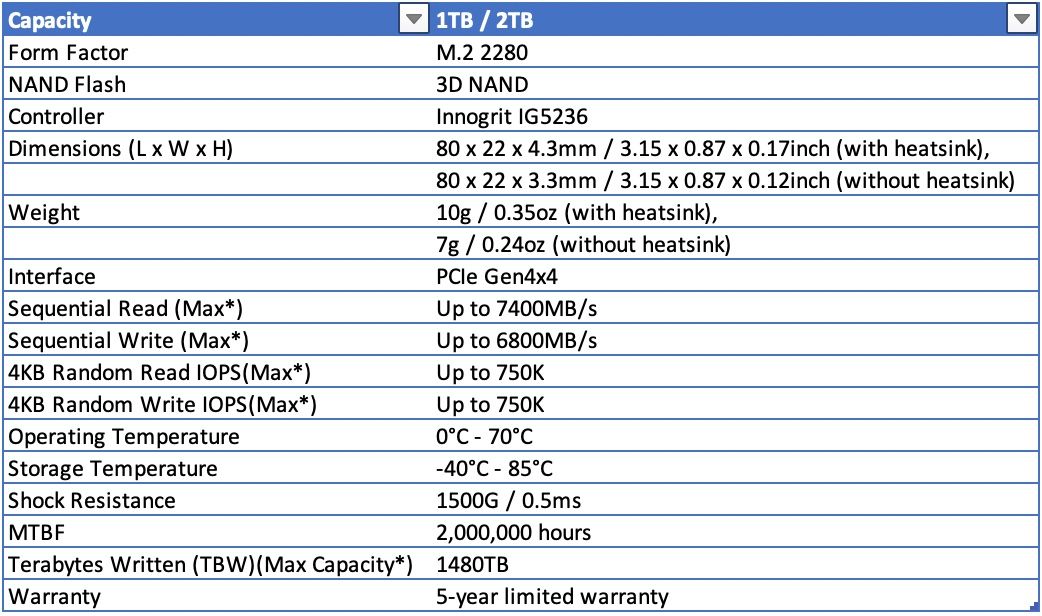 It’s actually quite a bit easier than you think to install an M.2 drive in your PS5. We’ve got images to guide you through this process so feel free to click through them at your pace.

First, be sure to remove the base of your PS5 if you have your PS5 in the vertical layout. Next, lay your PS5 on its left side. From this position, grab the top left corner and lift up. Don’t worry, you won’t break it. Then, slide the casing to the right. You’ll feel it detach and reveal the innards.

You’ll see a flat gray plate. Unscrew the screw holding this plate in place and set if off to one side. Inside, you’ll see the M.2 drive bay addition to another screw. Unscrew this as well, taking care to remove the standoff to which its attached. This is not a washer. You’ll need this later.

Carefully insert the M.2 drive into your PS5, taking care to install this at an angle as pictured. Next, grab the screw and standoff you removed from the M.2 drive bay. First place the standoff at the appropriate length. The Adata XPG GAMMIX S70 BLADE measures at 80mm so place this standoff in the 80mm hole. Next, gently push down on the M.2 drive to hold it in place while you screw the…uhh…screw.

And that’s it! You installed the Adata XPG GAMMIX S70 BLADE M.2 drive into your PS5! Congratulations. Here are some internet points. Now simply cover the drive bay with the gray plate, reattach your PS5 side covering, and plug in your console to a display and power.

Upon booting up your PS5, it’ll go through a formatting check and provide you a diagnostic on your M.2 drive’s Read Speed. Sony rated the Adata XPG GAMMIX S70 BLADE’s Read Speed at 6198.896 MB/s. Interestingly, this is below Adata's own rating of 7400 MB/s, but well above Sony’s internal drive.

You can confirm the correct installation of your new drive by heading over to the Storage menu in Settings. You’ll see Console Storage along with M.2 SSD Storage. 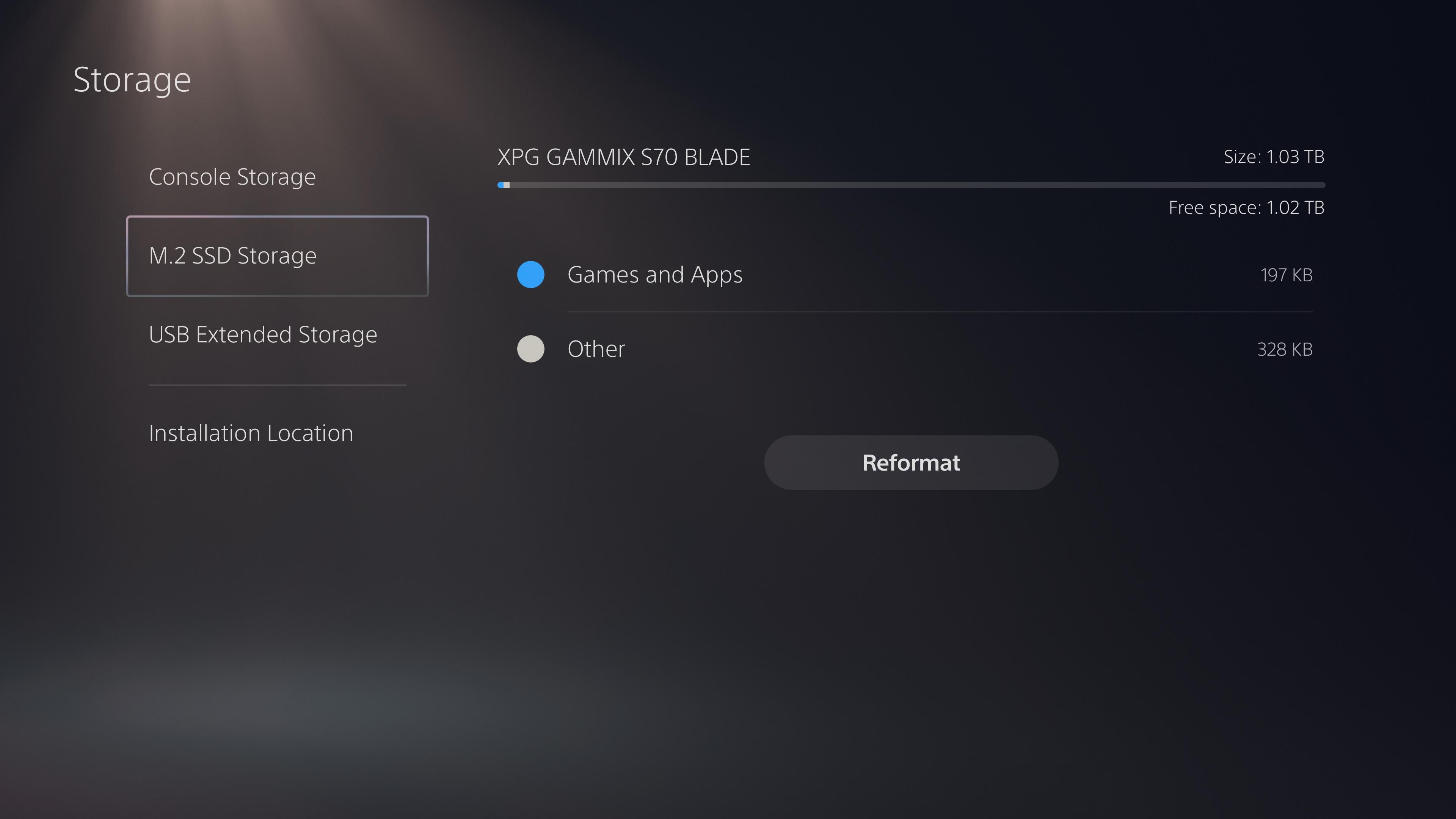 From here, you can even select onto which drive you’d like games to install by default. 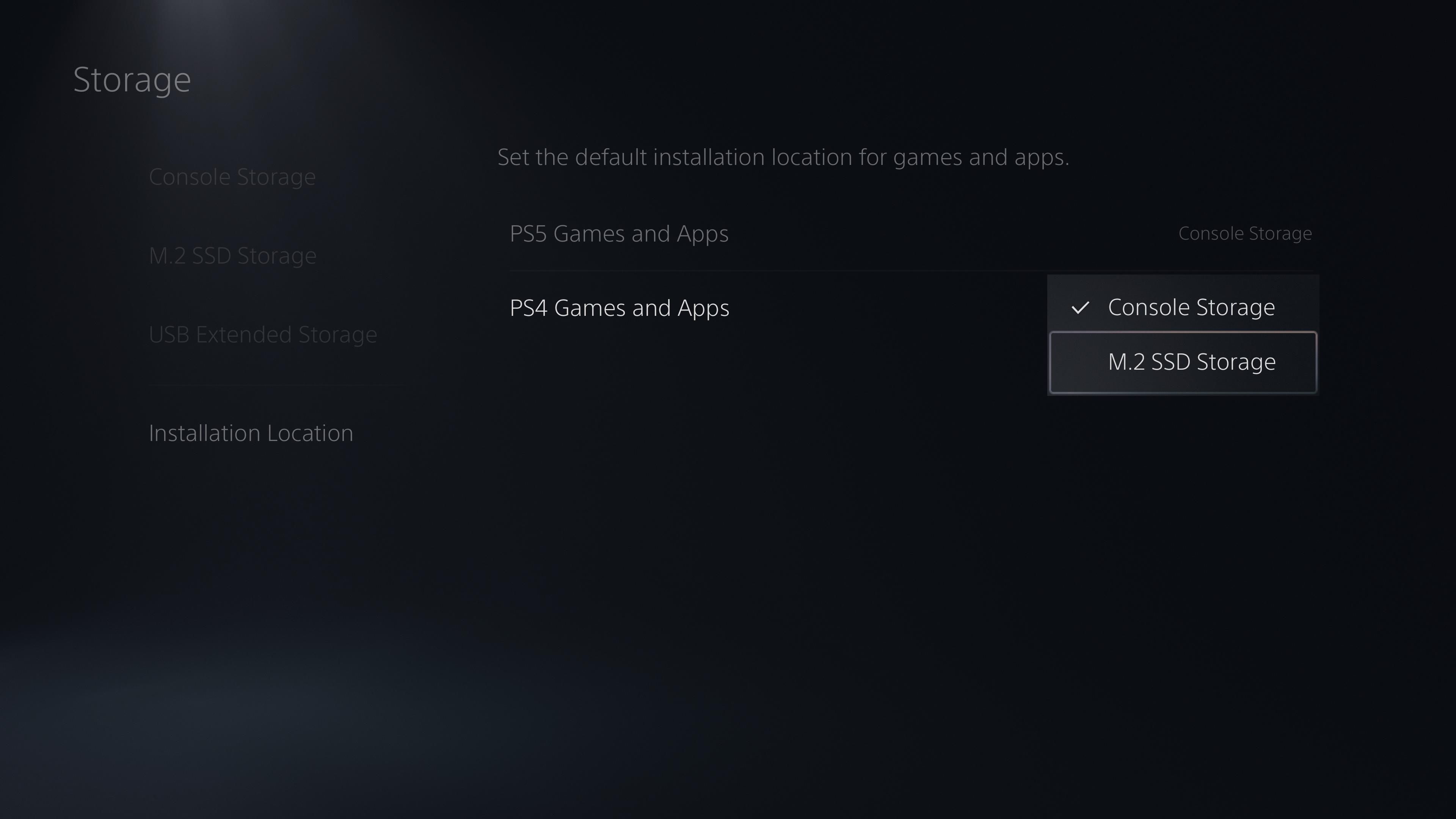 For our testing, I wanted to understand if load times were different for games installed on Sony’s internal PS5 drive versus the Adata XPG GAMMIX S70 BLADE installed drive. For this, I looked at three games: Ghost of Tushima Director’s Cut, Horizon Zero Dawn, and Killzone Shadow Fall.

I selected these titles deliberately to ensure a wider representation of varying degrees of native support from Sony’s developers. Ghost of Tushima Director’s Cut is a native PS5 app. Horizon Zero Dawn is a PS4 app which has been patched to work in an enhanced backwards compatibility mode. And Killzone Shadow Fall is a PS4 app which, surprisingly, hasn’t seen any such PS5 update. It is effectively the same game from 2013. But given the game shipped with an unlocked framerate, you can now enjoy this gorgeous shooter from Guerrilla Games at a rock solid 60fps. It’s really special stuff.

I tested load times as an average of three runs loading from the main menu into a save file. The times are provided in seconds.

As you can see, both the internal PS5 drive and the Adata XPG GAMMIX S70 BLADE produced nigh on identical load times. Any differences here are within margin of error. For all intents and purposes, these drives produce the same results.

Next, let’s look at transfer times. Using Sony’s Storage menu, you can transfer games across drives, thus freeing up space for you to use on other games or media. The process here is quite straightforward. You simply select the game, select the option to move it to your target drive, and confirm the subsequent message.

Here is how long each transfer took, again measured in seconds.

Immediately, we can see transferring games from the internal PS5 drive to the Adata XPG GAMMIX S70 BLADE M.2 is significantly faster than the reverse, sometimes up to six times faster in the case of Horizon Zero Dawn. I’m honestly not sure why this discrepancy exists. However, the takeaway here is despite the differences in transfer times, the actual gameplay experience – that is, loading into the title and playing the game – is nigh on identical across both drives. And ultimately, that’s what matters most. A lack of disruption is key to providing and indeed sustaining a consistent experience. And to that end, Sony’s implementation does what it says on the tin.

Ultimately, I came away impressed. I was impressed with Sony’s implementation of third-party drive support, ensuring consistent experiences. I was equally impressed by the Adata XPG GAMMIX S70 BLADE and the ease of install and its performance.

If you’re thinking of expanding your own PS5’s storage with a compatible M.2 drive, I hope you found this guide and analysis useful. It’s clear Sony’s vision to help answer the question, “what is next generation,” is rooted in providing gameplay experiences that were hitherto not possible. Their embrace of a modular and open approach to expandability only enables this vision. And ultimately, I believe this more PC-like mentality is the correct one.