Overlooked and underserved, the modern PC Power Supply is possibly one of the most important buys for any gaming rig, so when Gigabyte dropped the new P750GM on our door we couldn’t help but take a look.

The Gigabyte P750GM power supply is a fully modular 750 Watt Gigabyte branded power supply that seems set to manage a balance of features, reliability, and performance metrics that should suit the increasingly popular small form systems that nestle in many front rooms today.

Unboxing a brand new P750GM for the first time, it is instantly clear where this compact line up of PSUs sit in Gigabyte’s arsenal. While the Aorus branded power supplies, such as the Aorus P750W, house a sizable 135mm fan, the P750GM manages to pack in a similar feature set with a reduced footprint.

Unboxing the P705GM reveals a rather unassuming power supply. With just a smattering of Gigabyte branding around the relatively straightforward metal chassis, this power supply is hardly looking for attention. However, the functional exterior houses a ton of features and supports a wealth of connections for almost any build you’re looking to put together. At the heart of the P750GM lies Japanese capacitors, generally assumed to be a good investment if you want longevity in your PC's power house. This is all cooled by a 120mm smart fan which adjusts based on power consumption, the way you’d expect any modern cooling component to do. The inclusion of a hydraulic bearing fan and sold Japanese capacitors don’t just talk to the overall construction approach, they provide some definitive assurance that the P750GM should at least make it through the 5 year warranty that Gigabyte provides, all while Shaving 2cm off the dimensions that make up larger Aorus range of gaming power supplies. 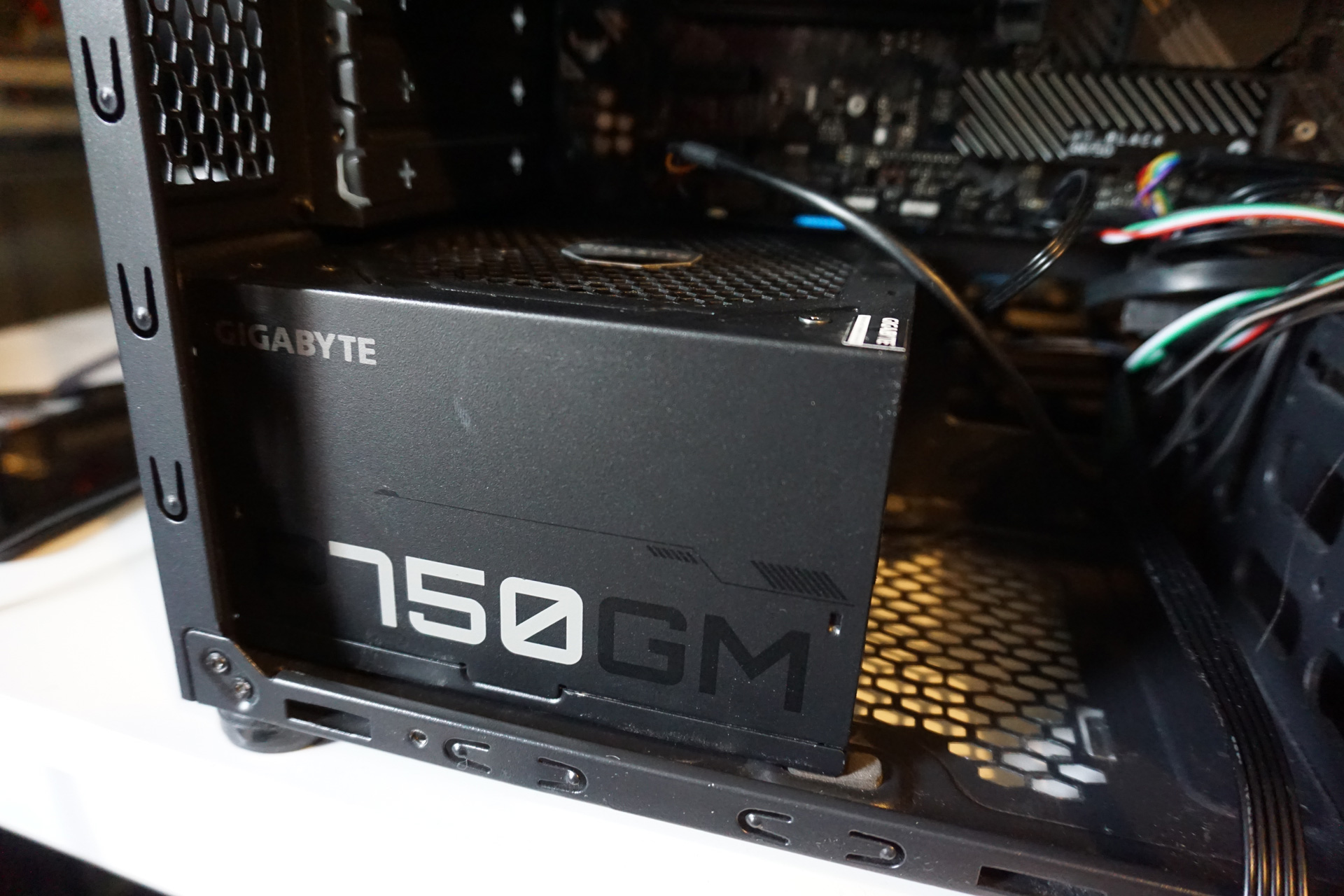 While solid construction can’t always protect you from the worst-case scenario, the P750GM comes utterly chocked full of protection. OCP, OTP, OVP, OPP, UVP and SCP protection come as part of the package and while that doesn’t mean that we’d go it alone without any further protection from electrical mishaps, it’s very gratifying to see that this is all crammed into a such a small package.

The Gigabyte P750GM is clearly looking to find a space in the market that finds it squeezing into a range of cases. Even with the smaller form factor designs that tend to hide away in the front room, or on a dorm shelf, the P750Gm should fit nicely in larger units too. The fully modular construction avoids wasted space, prevents airflow issues, and will keep your cable management in check. With all of the following connections available at the end of the included flat form connectors, the P750GM is unlikely to come with unnecessary clutter.

We have made it quite clear that this isn't a full review, but a first look at this power supply includes taking it for a quick spin. As described above, the P750GM isn’t one for ceremony. Like any decent power supply, it simply slots in place. The space-saving the P750GM has over larger power supplies makes a massive difference in just getting around a mid-sized tower, and this is only going to be an even greater benefit when downsizing further. The smaller form factor and reduced fan size do raise the question of cooling and when we decided to reorientate the P750GM to make use of the bottom vent on this system, disconnecting the PSU side cabling and swivelling everything around took mere minutes.

Despite my initial concerns regarding cooling, we ran the above system through some initial stress tests using 3DMark and OCCT and while these artificial loads are far from a fully conclusive result, our initial impressions found that the P750GM didn’t introduce any issues. Under load, this volunteer system reached 85 degrees celsius with both the P750GM slotted in place and a Kolink branded 700W supply, with its own 120mm fan, for a quick comparison.

While the temperature variables under load don’t seem to be too different from an equivalent full sized power supply units that the P750GM might compete with, the Gigabyte’s hydraulic fan bearings do bear out a difference in noise when under load. While we ran some checks inside this case, it’s unlikely that anybody is going to aim for an open-air case behind the entertainment system. Instead, it is worth noting that against the aforementioned Kolink and its sleeve bearings, the P750GM managed to clock in a measurable 5 dB reduction in external noise after repeated stress tests.