Aggressive aesthetics, oodles of aerials, and totally unnecessary lighting. It’s hard to mistake the Xiaomi Mi Router AX9000 for anything other than a piece of gaming hardware, but beyond the intimidating facade of this sleek-looking bit of networking kit, does it justify jumping up from the default ISP hand-me-down in the corner?

The Mi Router AX9000 is a new piece of home networking hardware designed by Xiaomi to bring some seriously top-end networking capability to your home. It comes in near the top end of the market, competing against other devices like the Netgear Nighthawk range, but looks like it could pack in just as much performance with the budget-friendly proposition that is Xiaomi's hallmark.

Getting the Mi Router AX9000 out of the box, it’s very quickly evident that this router comes with some serious horsepower under the hood. While you might be more accustomed to slipping something out the box, the Mi Router AX9000 is a beast of a device. thumping on the desk it stamps its authority at 2.15 kg. If that isn’t enough, the angled black antennas and ventilation fins give this a menacing presence. When turned on for the first time the red glowing LEDs atop the Mi Router AX9000 almost seems like a warning to the rest of the routers on the street that it has arrived.

It might be understating the matter to say that the Mi Router AX9000 is a formidable device. The core of this router is designed to take on anything that consumers can throw at it without ever compromising the integrity of your gaming experience. A plethora of potential connectivity is integrated into the base of the device, including 5 ethernet ports, two 2.5Gbps, and three 1Gbps connections. The wireless adds a monstrous 160 Mhz bandwidth thanks to WiFi 6 compatibility and a total of 12 independent antennas are clustered across three separate bands.

The WiFi 6 certification means that there are plenty of new tricks that the latest ISP drones won’t be able to beat. The tri-band connectivity provides two 5Ghz connections, rated at 4804Mbps and 2402Mbp, as well as one 2.5Ghz wireless connection, running at 1148Mbps. MU-MIMO and OFDMA tech allows for stable connectivity and minimized latency by breaking the available bandwidth down and serving devices without queuing up on a first-come-first-served basis. While beamforming allows automatic detection of device location, directional enhancement of signal, and all-around better coverage. 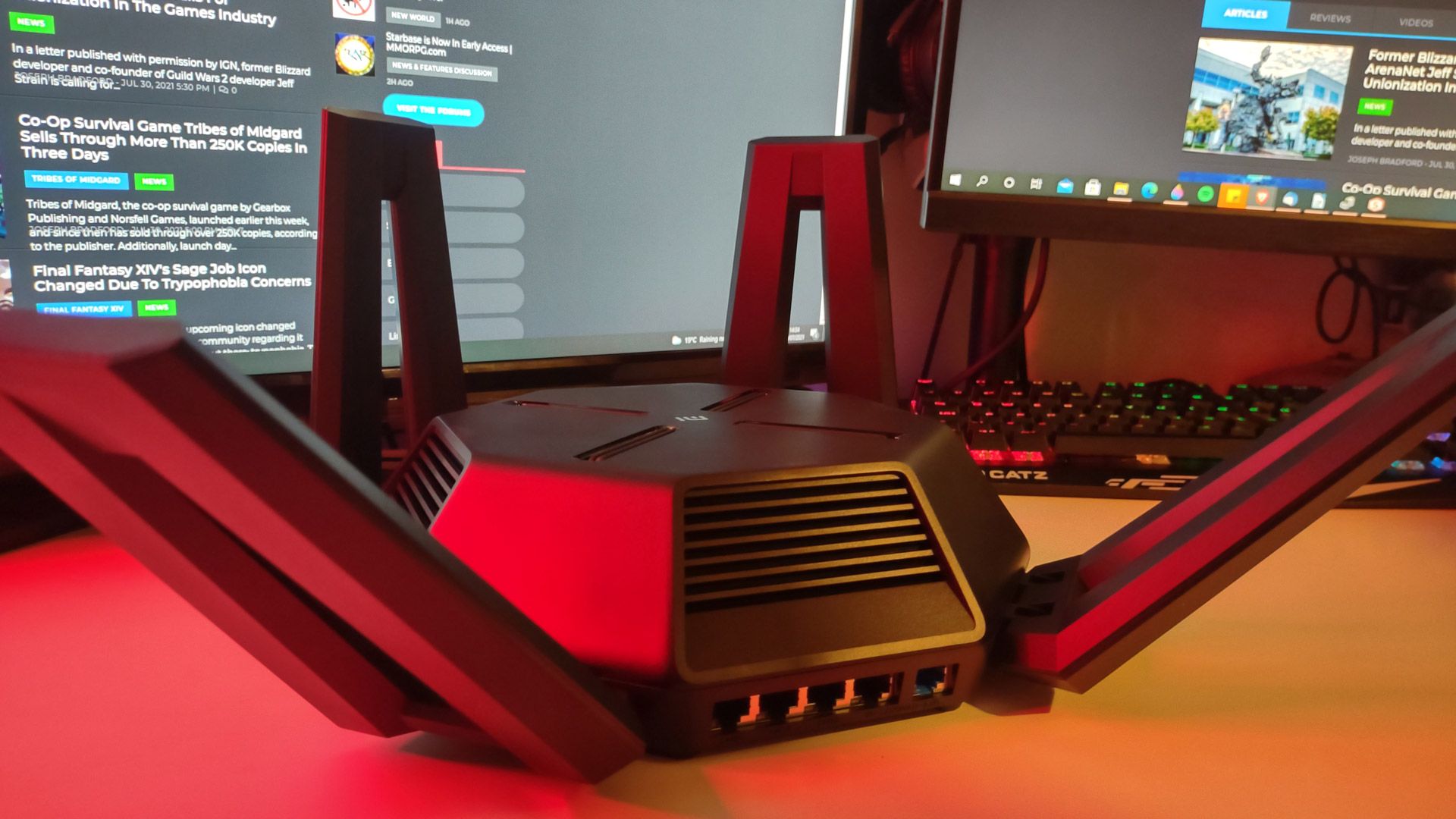 Housed behind the four very obvious air vents is the heart of the Mi Router AX9000, a Qualcomm IPQ8072E. Actively cooled, this 14nm chip comes split between a quad-core 2.2Ghz and a dual-core NPU clocking in at 1.7Ghz, allowing the Mi Router AX9000 to control and coordinate three discrete network bands and advertised throughput speeds of 9000Mbps across the onboard connections. The 1GB of onboard memory provides plenty of room for detailed configurations and over 200 simultaneous connections, because why not. There’s also a USB 3.0 high-speed port nestled near the bottom of this base station that can open up the option of easy private network storage thanks to SAMBA compatibility.

How Do You Setup the Xiaomi Mi Router AX9000?

With so much going on at once, you’d imagine that the Mi Router AX9000 is likely to require some specialized training to set up. Thankfully this is far from the case. I can confess that I read the first two pages of the manual before setting up and then simply ran with it.

The Mi Router AX9000 can be configured in several ways using a WiFi portal, a web interface, or the Xiaomi Home app. Each provides its own benefits, but some things are generally consistent. In most situations, outside of mesh and wireless-only configurations, you’ll need to use the included cabling to connect the WAN port to an outgoing modem or router.

After plugging in and powering on, I found the captive portal-styled WiFi setup the quickest option out the gate. If you want to get online with minimal fuss then simply connecting a smartphone to the default device SSID and entering the requested information will result in a connection within minutes.

While there are some presets for potential popular connections, the Mi Router AX9000 is surprisingly intuitive at searching for and setting up an internet connection without any direction. If it fails to route traffic or find an active internet connection on its own then the following setup screen provides options for Access Point config, Mesh Networking, and other more advanced options.

For anybody that requires a might more configuration, connecting via a fully-fledged web portal provides plenty of boxes to tick, including the aforementioned AP settings, bridging modes, and mesh network setup. The advanced settings, as expected, provide plenty of customization, traffic management, filtering, and QoS capability that you’d expect from any modern router.

The smart home app, while likely a great addition for anybody jumping into the Xiaomi ecosystem, was less impressive during the initial setup for us, sending us in circles and generally not working as fluidly as we would have liked. Honestly, just avoid the app.

How Fast is the Xiaomi Mi Router AX9000?

Let’s be clear, as powerful as this is, it will absolutely not make your internet go faster. Both my own branded ISP router and the Mi Router AX9000 both managed the same sub 60 MB speed test and that dial will not creep up any further for you either. It is likely that old-school copper internet connections will bottleneck this router for some time. However, that story changes somewhat when it comes to your internal networks.

While wired connectivity is solid with plenty of 1Gbps ports, I would have loved a 2.5Gbps port that wasn't sacrificed as the WAN connection. WiFi speed, however, is an entirely more complex affair. This isn't an in-depth dive and mostly more of a first look. To test the speed and stability of this router’s WiFi we first connected to my existing ISP box and compared it against the Mi AX9000’s top tier 5Ghz Gaming channel.

Iperf3 was used to test the bandwidth during this quick comparison, running 8 distinct times and averaging out the bandwidth. The server for this test was wired up to the AX900 via the 1Gbps port using the onboard 2.5Gbps adaptor on an Asus TUF B550 board. 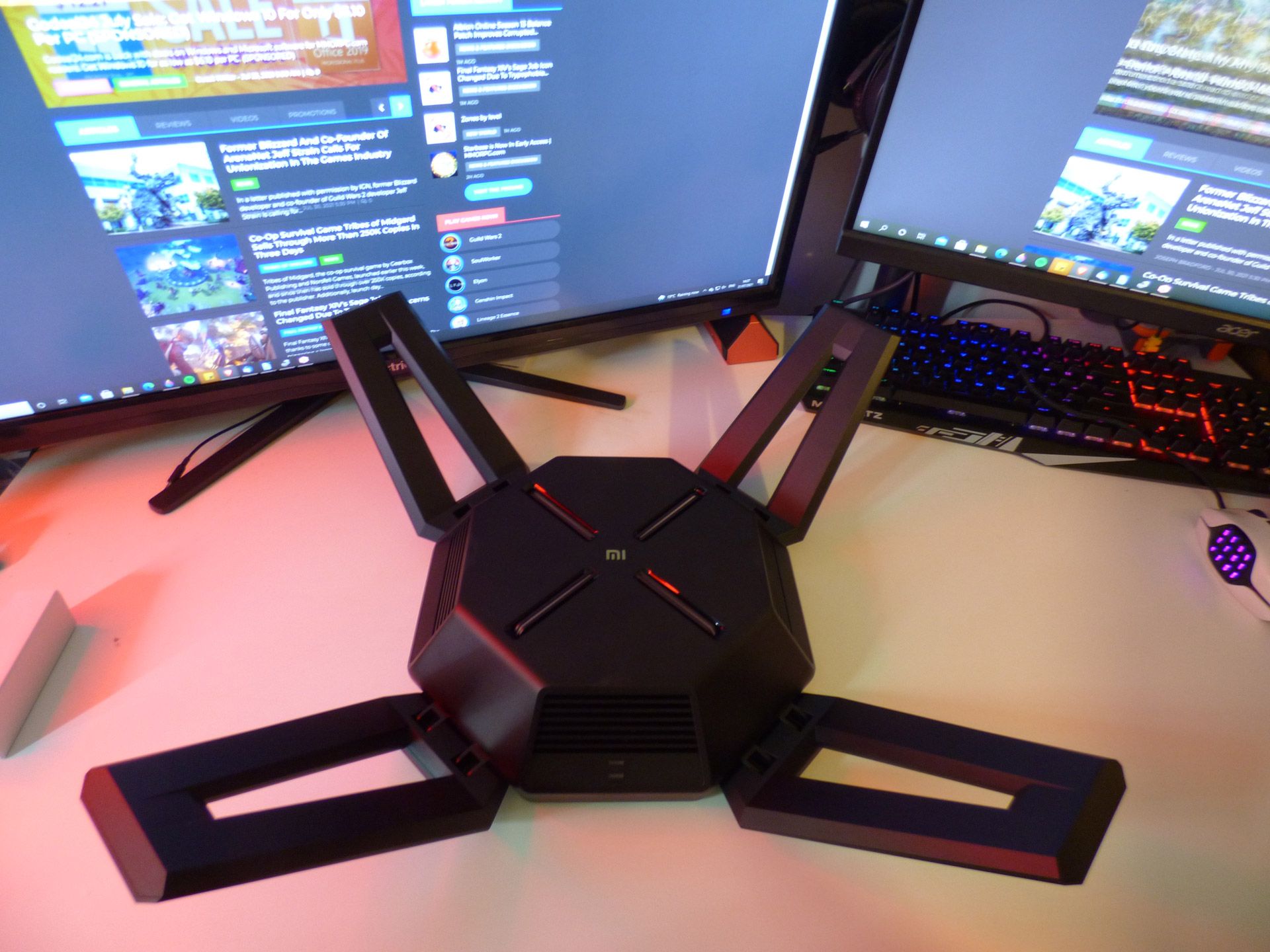 In real-world tests, the ISP’s own router managed a baseline average of 399 Mbits/sec, 145Mbps out into another room, and the dreaded dead spot was a no-go.

The new Mi router managed a baseline of 837 Mbps which while might be slower than the 1Gbs ceiling we were hoping for but can’t account for dodgy cabling, odd interference, and real-world connectivity trouble. It also still managed to crush the ISP's own branded device.

When pushed a bit further out into another room, the WiFi 6 standards came out tops with a solid average of 637 Mbs and even brought life to a dead spot I’ve had with a slim 72Mbs. While that doesn’t sound like much, I’ve had to use a range extender in a one-bedroom apartment for the last few years and the ridiculousness of it isn’t lost on me.

What is most audacious about the Mi Router AX9000 is its stability under pressure. If you thought that active cooling was just for speed then you’d be flat wrong. The ridiculous number of potential active connections this device can handle is a testament to the way it manages the bandwidth we measured a moment ago. With a tri-band system in place and 12 antennas, the latest gaming router from Xiaomi can prioritize, manage, and deliver to the same steady speeds to an astounding number of machines. While we couldn’t artificially load this device we threw some real-world tests at it by transferring a 4K movie between computers, downloading the Steam release of Horizon Zero Dawn, Updating Genshin Impact and trying to stream from Netflix. While our poor underpowered internet was crushed under the weight, testing network bandwidth just on the secondary 5Ghz bandwidth showed a minimal downtick in speeds. Yes, it’s hardly scientific but it was more than enough to discern that the Mi Router AX9000 is entirely overpowered for even a 2 person tech household.

Despite its incredible capabilities, starting at $259, the Mi Router AX9000 is still a fairly expensive device. Plenty of perfectly capable routers come in at under $100, so you'll still want to consider if you need all this power. That processing power also comes with active cooling, which means accommodating extra power consumption, heat, and noise. Even if the fans in the new Mi router aren't particularly overwhelming, they are always present.

The Mi Router AX9000 is undoubtedly a huge step up for anybody who is sick of lagging behind their housemates and family for a low latency gaming experience. It provides all the configuration options that we would expect from a top-end network device and a light touch setup experience that gets things moving in minutes. If you've got an expansive internet connection and a fight to get to the front of the queue on your hands then the Mi Router AX9000 could prove to be a solid investment that won't send your bank balance down into the bronze tier.

You can find out more over on the official Mi website now.