The Razer Leviathan V2 is already a great soundbar for your PC set up, and the Leviathan V2 Pro aims to take it up a notch. Featuring more drivers and a larger subwoofer, the V2 Pro is also the world's first PC soundbar that utilizes AI-head tracking and adaptive beamforming technology to literally envelop your ears with sound.

At the Razer booth at CES here in Las Vegas over the weekend, I was able to check out a demo of the new soundbar, seeing what the new technology brings to the table. At first glance, the soundbar's larger size made me think that the shortcomings of the original V2's soundstage, especially in a wider room, but once I sat down and started to listen to the Spotify playlist that Razer had prepared, I really found myself marveling at what the technology brings to the table.

The Razer Leviathan V2 Pro sports five full-trange drivers in the bar itself, as well as the down-firing subwoofer, all of which connects to your PC via USB-C. Like the Leviathan V2 before it, this is designed for PC, so you're not going to find any optical in or other audio ports you might use to connect it to a console or a TV. Rather, as Razer explained it to me at CES, this is designed for the best PC audio in your computer room.

Aside from the larger body size of the soundbar itself, the Razer Leviathan V2 itself has a new volume dial right on the top, a dedicated equalizer button, a source button to swap between PC and Bluetooth, a Chroma Mode button for that all important RGB as well as a button to swap the 3D audio mode you have selected.

The front of the bar also houses the new IR camera, which tracks your head and enables the beamformed sound to accurately place your position in space. The new 3D audio modes on the device utilize this data to deliver the best sound quality to you, whether you're taking in a movie or playing an incredibly high-end game.

The THX Spatial Audio Virtual Headset mode does just what it sounds like: it simulates a virutal headset around your ears using the headtracking to effectively direct the sound to your ears. It sounds insane, but it's equally insane when using the feature. While sitting in the Razer booth, I could physicaly feel the sound enveloping my ears, as if i was literally wearing a headset. It was eerie, yet incredibly cool at the same time. The clarity was incredible as well, not feeling muffled or muddled when using the mode, even with the noise of CES happening all around us. 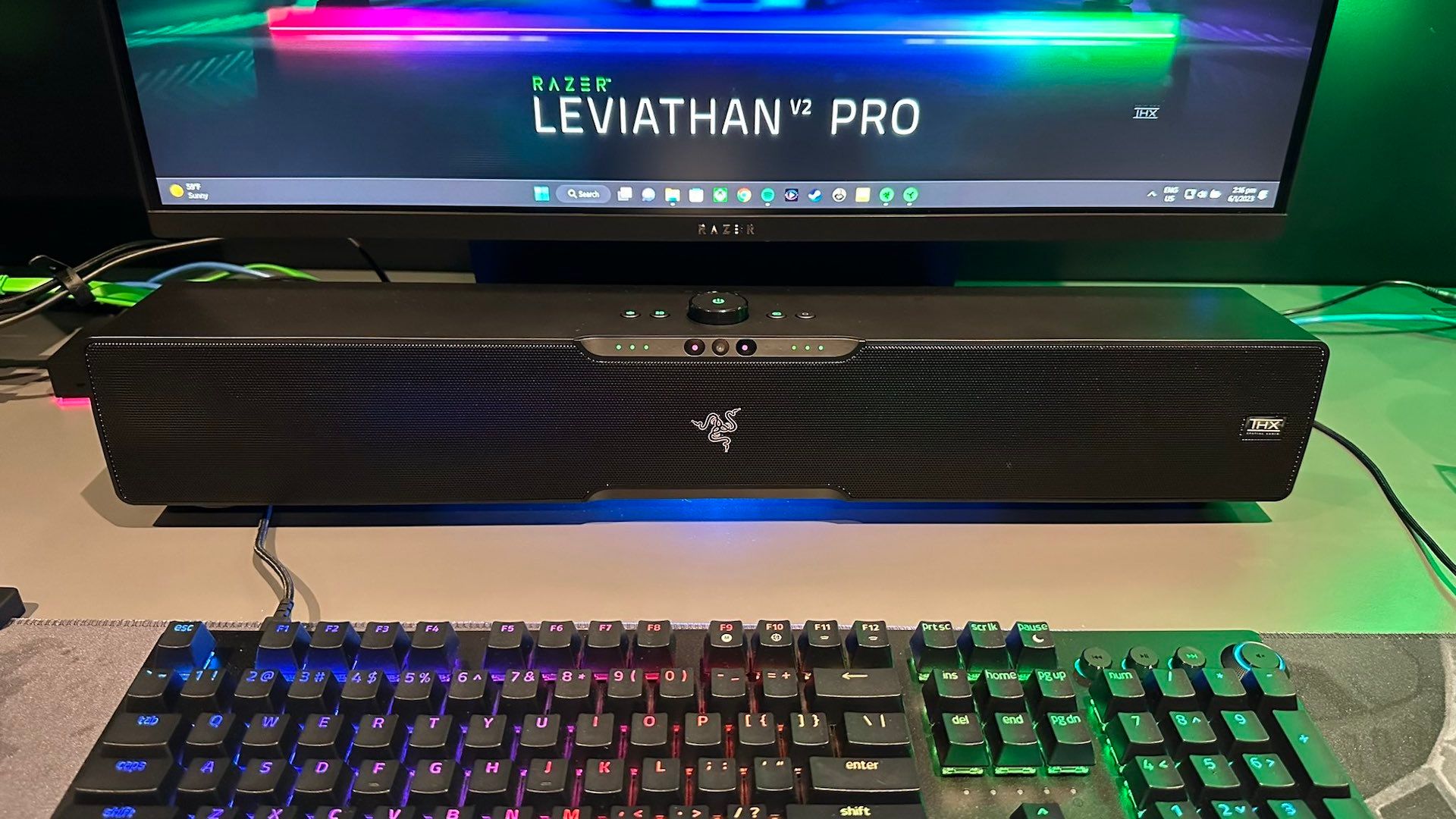 The Spatial Audio also allows Razer to simulate 7.1 surround sound speakers around the user, giving a full multi-channel experience with just the bar in front of you. The original Leviathan V2 attempted this to some success, really depending on the room you're in, but here it felt like I had physical speakers placed around me. I actually looked as I was leaving the demo booth to see if maybe Razer had snuck one in there. Nope, it was all happening thanks to the IR camera tracking me and the beamforming sound encapsulating my head. That said, if you're hosting a few people in your house and your computer is nearby, the room fill could come in handy when playing that latest Apple Music playlist from your phone.

There is also a mode that us just a pure stereo speaker setting, as well as a full-room setting that seeks to encapsulate the whole space with audio. But none felt nearly as impactful as when that pair of virtual headsets were place on my ears.

I have to say, the tech on display was incredible. It's got me excited for how this could be utilized in a setting that isn't highly curated to show off the device. Will this be as impactful back in my own home office as it was in Razer's booth? Time will tell. I can imagine myself walking down the streets of Night City in Cyberpunk 2077, using the Spatial Audio Virtual Speakers mode and hearing clearly the rancor of the Cyberpunk city all around me. Or maybe in the middle of a Final Fantasy XIV trial and listening in for an audio cue that will help me dodge a boss attack or follow up a skill with a proc. Hell, what is Weatherstock going to sound like when using this soundbar?

It's exciting stuff, but at $399 it might be a hard sell for some, especially given that it's limited to PC. But the tech on display might be enough to get hold-outs who didn't pick up the early iteration of the soundbar to finally drop the money on one when the Leviathan V2 Pro ships this year. We'll definitely be interested in putting it through its paces ourselves when it does.