I have been on a bit of a journey over the past few years and I’d like you to join me. But, take my advice: bring a sword… a Katana, to be exact; it will prove quite most useful.

Okay, that introduction sounded more dramatic than it had any right to, but my point is this: sound (and the gear you use to experience it) can either enhance or detract from the experience itself. Good sound delivery creates space for the right notes and effects to cut through the mix, providing articulate, immersive details to the gaming experience.

A good pair of headphones can do this (and we have reviewed a number of them here at MMORPG.com) but, is it possible to get this kind of sound out of speakers? If so, what if you are working within the confines of limited desktop real estate or, no matter how creative you get, you don’t have room for multiple satellite speakers? Does something else need to be sacrificed for audio quality?

This is the journey I have been on, a journey that led me to the Sound Blaster Katana V2 from Creative Technology.

(Just a little housekeeping before we dive in: This article is not an in-depth review of the Sound Blaster Katana V2 though we will be covering some of the information provided within that review. You can find it here. Also, full disclosure: Creative Technology did send us a unit for this article.)

While I wouldn’t call myself nomadic, my wife and I have moved quite a bit in the past few years. Some of those moves were intended while others… not so much. Each new location has presented both new challenges and opportunities, but sometimes, despite careful packing, there are casualties in a move or some items just don’t make the cut. In one of our more recent moves - a move that took us half way across the country, my surround sound PC speakers didn’t quite make it.

Rest in peace, Creative Inspire 4.1 4400… you are gone, but not forgotten. You served me well.

Fast forward a few years and another move and we found ourselves in a lovely new home, but with a much smaller office space. Not ideal, but it was the compromise we needed to make, assuring ourselves that we could make it work. What “it” needed to be made to work?

This was a space that needed to accommodate both of our workstations and all their associated gear. It also needed to have enough space for the work that I do with MMORPG.com, which often requires a workbench of sorts.

Back to the speakers…

While I had a lovely pair of headphones, I didn’t want to isolate myself in those moments when I'm sharing the space. So, I replaced my previous sound system with a lovely pair of speakers for these moments, but fitting them alongside monitors, mics, and mixers needed for creative tasks became a challenge. Something had to change, but what?

I tried a few different things - monitor stands, monitor arms, different mic/lighting/camera mounts, moving my PC on and off the desktop, different audio controllers/mixers… you name it. With every iteration, the speakers got shoved behind things or moved into odd spaces. As you can imagine, my audio quality wasn’t the greatest. Getting a bigger desk was out of the question and everything on the desk needed to stay… except the speakers.

This brings us to the present and a product category made for such a task: soundbars… but not just any, the Sound Blaster Katana V2. Before we jump into my experiences with it, I want to give you some details about the Katana V2 - what it is and what it offers. 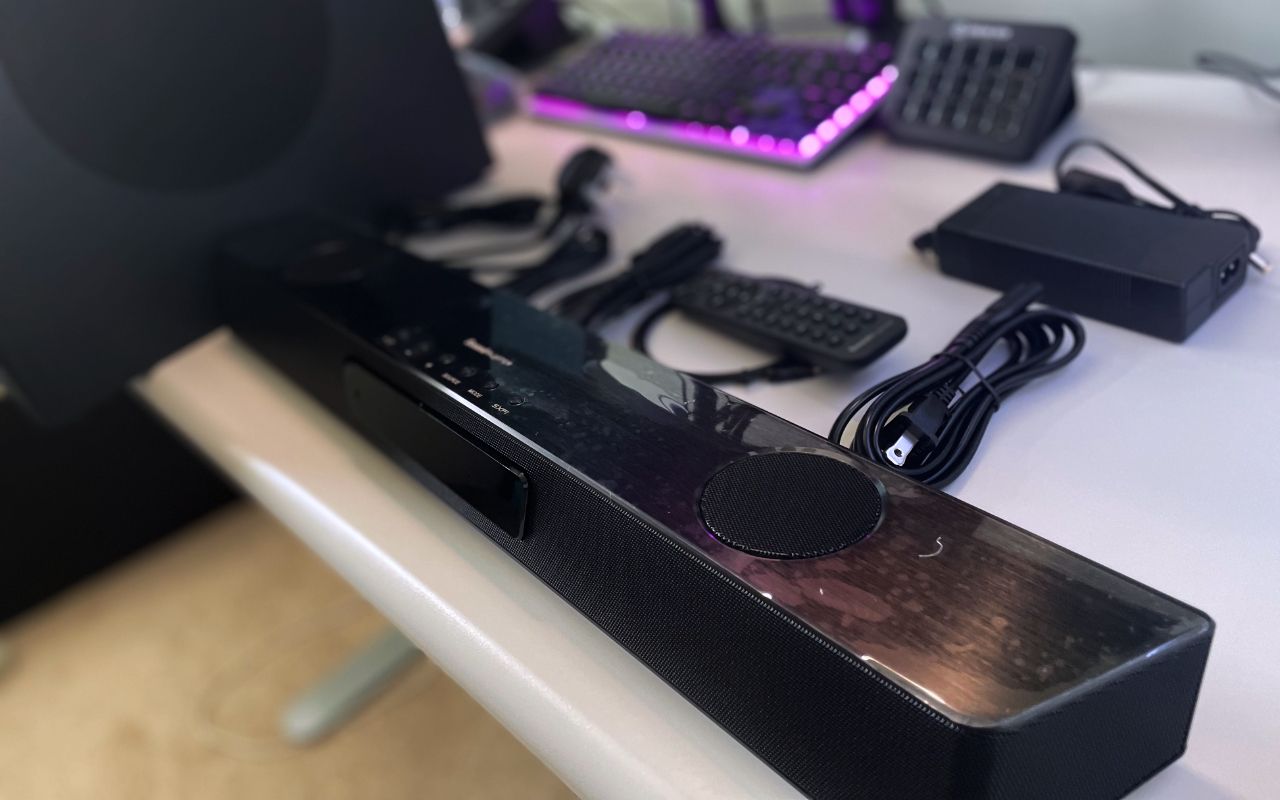 The Sound Blast Katana V2 consists of a soundbar containing two 63mm (2.5 inch) mid-range drivers and two 19mm (¾ inch) tweeters handling the higher frequencies as well as a subwoofer equipped with a 165mm (6.5 inch) driver. From a footprint standpoint, the Katana V2’s soundbar measures in at slightly under 24 inches long (23.6 inches or 600mm), allowing it to live comfortably under a 27-inch monitor.

As far as power goes, the Katana V2  provides up to 126W RMS (or Root Means Squared - the average output a speaker can operate at over time without damaging the device) with a peak at 252W. That’s an incredible amount of headroom between average use (which I assure you is ample) and what the system is capable of delivering. I’ll talk more about this when I share my experiences.

Raw power and compact size are only two parts of the equation that make the Katana V2 such a fantastic choice. It can also handle a modest frequency range (50Hz - 20kHz) while offering users a variety of presets for gaming, music, and movies alongside of the tools to hone the Katana V2 to your personal use cases. For example, the Katana V2 is also equipped with a Scout Mode for FPS players. This setting helps players that are attempting to pin-point movement through grass or where enemy fire is coming with a greater degree of detail.

For more fine adjustments, users can take advantage of Creative’s companion app. This app allows users to adjust Creative’s Acoustic Engine which includes settings for depth of surround sound, audio Crystalizer to add dynamic depth of sound to music, dialogue enhancement, and a Smart Volume setting which intelligently lowers volume as needed. There are six preset user banks that can be saved to the system and recalled utilizing the Katana V2’s remote or the companion app.

The Katana V2 system also has versatile connection options. This includes audio through USB Type-C, optical-in, analog auxiliary, Bluetooth 5.0, Creative’s SXFI-out, and HDMI ARC. This is great news for people interested in utilizing their soundbar with multiple inputs, such as console and TV use. It also has a headphone jack in the front of the soundbar in case you need to take things in a more personally immersive space.

And, yes, the Katana V2 does have programmable RGB. 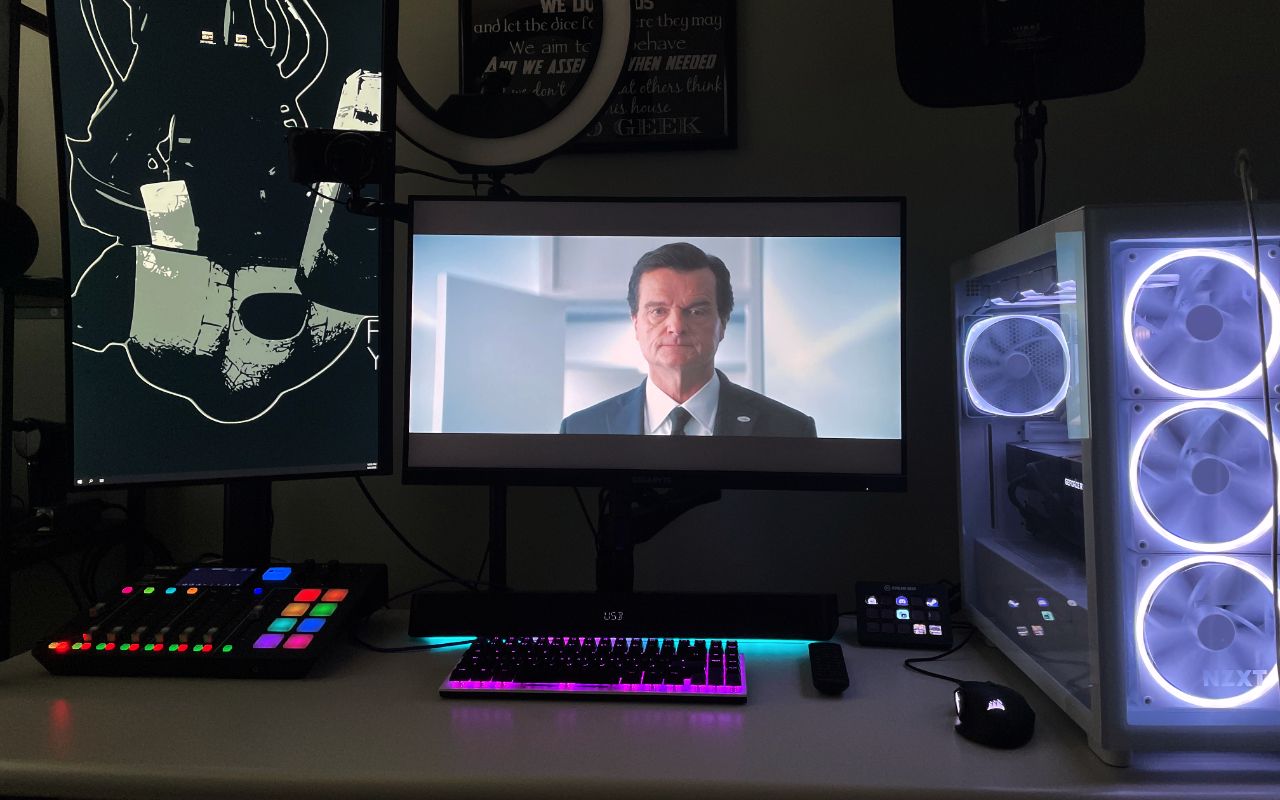 My Experience Wielding the Katana: Putting it All Together

So, was the Katana V2 what I needed to solve my spacial needs? Am I done hiding speakers to make space?

Friends, it did so much more.

As mentioned earlier, the dimensions of the soundbar allow it to fit comfortably under a 27-inch monitor, which is exactly what it did! Everything else fits on the desk without compromise or without feeling too awkward in its arrangement. But more than space, it created a broader listening and gaming experience without being too loud. Remember: this is a shared space, so I try to be as conscientious as possible ESPECIALLY when I’m sharing it.

What I noticed while using the Katana V2 was that I could fill the room with sound without it feeling loud, overpowering conversations, or just being inconsiderate. I wanted to give this a test, so, one Saturday while we were both gaming in the same room, I set up a Dolby surround sound test. While I am experiencing the full, theatrical soundscape, my wife is unphased. This would have been the point where I would have anticipated a response of “hey, that’s a bit loud… mind clicking it down a notch or two…” but, nothing. When asked, she thought it sounded great without feeling like it was anywhere near uncomfortable in the room. This is a huge win!

This is achieved through the incredible power and headroom the Katana V2 has at its disposal. Like a young Luke Skywalker measuring up Master Yoda for the first time, I was tempted to judge the Katana V2 by its demure size, but, rest assured, there is a whole heap of power packed into this small setup… and it isn’t just ear-assaulting audio, it’s a beautiful, full soundscape that you can really get caught up in.

Now, it’s not perfect. I found a couple of quirks that are more minor annoyances than dealbreakers.

The Katana V2 does have an energy-saving mode, but the “time-to-wake” is a bit long. If you are someone who is back and forth between tasks long enough for your PC and soundbar to fall asleep, just be prepared that it will take the Katana longer to be ready than your system.

The second quirk is a bit more a personal fussy thing… because the Katana sits directly under my monitor, it puts it in the immediate path of my keyboard’s USB cable. This is… semi-fine… considering that the channel underneath the soundbar is tall enough to allow the cable to fit within it, but it wraps around awkwardly while blocking the underglow of the RGB. Having optional feet might have been a nice touch, however, I understand the sleek aesthetic. I do, I am so inclined, have the option to wall mount the soundbar as the Katana V2 does come with the hardware to make it happen.

The journey to the Sound Blaster Katana V2 has been many years in the making. While it won’t replace my headphones for late night gaming, it does provide an incredibly immersive depth of sound without dominating the desktop or the room itself.

A few months back, MMORPG’s Chris Coke had one word to describe the Creative Katana V2 and, after talking with him at length about my own experience, it remains the same: 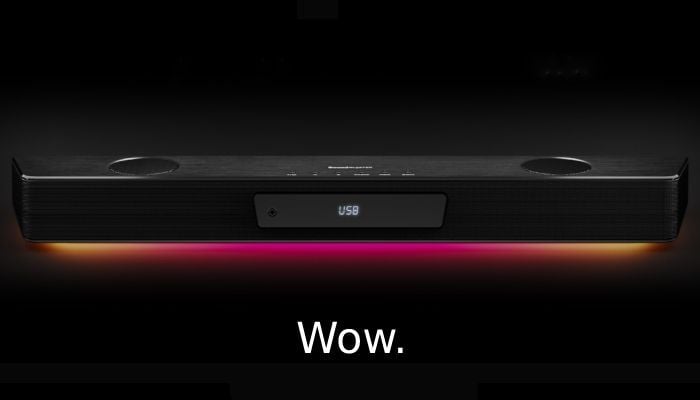 I couldn’t agree more. This is truly an “end game” audio device.

Coming in at $329.99, the Sound Blaster Katana V2 is a bit of an investment, but it provides enough modern amenities, presets, and user control that it could be the last soundbar you buy for a while.