AMD took to the Las Vegas Strip to officially unveil their latest architecture in the Radeon graphics pipeline: RDNA 3. Alongside the RDNA 3 coming out party was the official announcement of the Rx 7900 XTX and the Rx 7900 XT, both coming December 13th.

Let's not bury the lede: the Rx 7900 XTX and Rx 7900 XT will release simultaneously on December 13th at $999 and $899, respectively. AIB boards are also expected to launch on the same day. The new GPUs take advantage of the latest RDNA 3 architecture, with the  following:

RDNA 3 is the world's first chiplet gaming GPU, with the company announcing that the RDNA 3 GPU will feature both a 5nm Graphics Compute Die and a 6nm Memory Cache Die. The chiplet approach mirrors what AMD has been doing in the CPU space for some time now, and the company has engineered a way to bring the benefits of the modular design to make the most of their silicon here with RNDA 3. 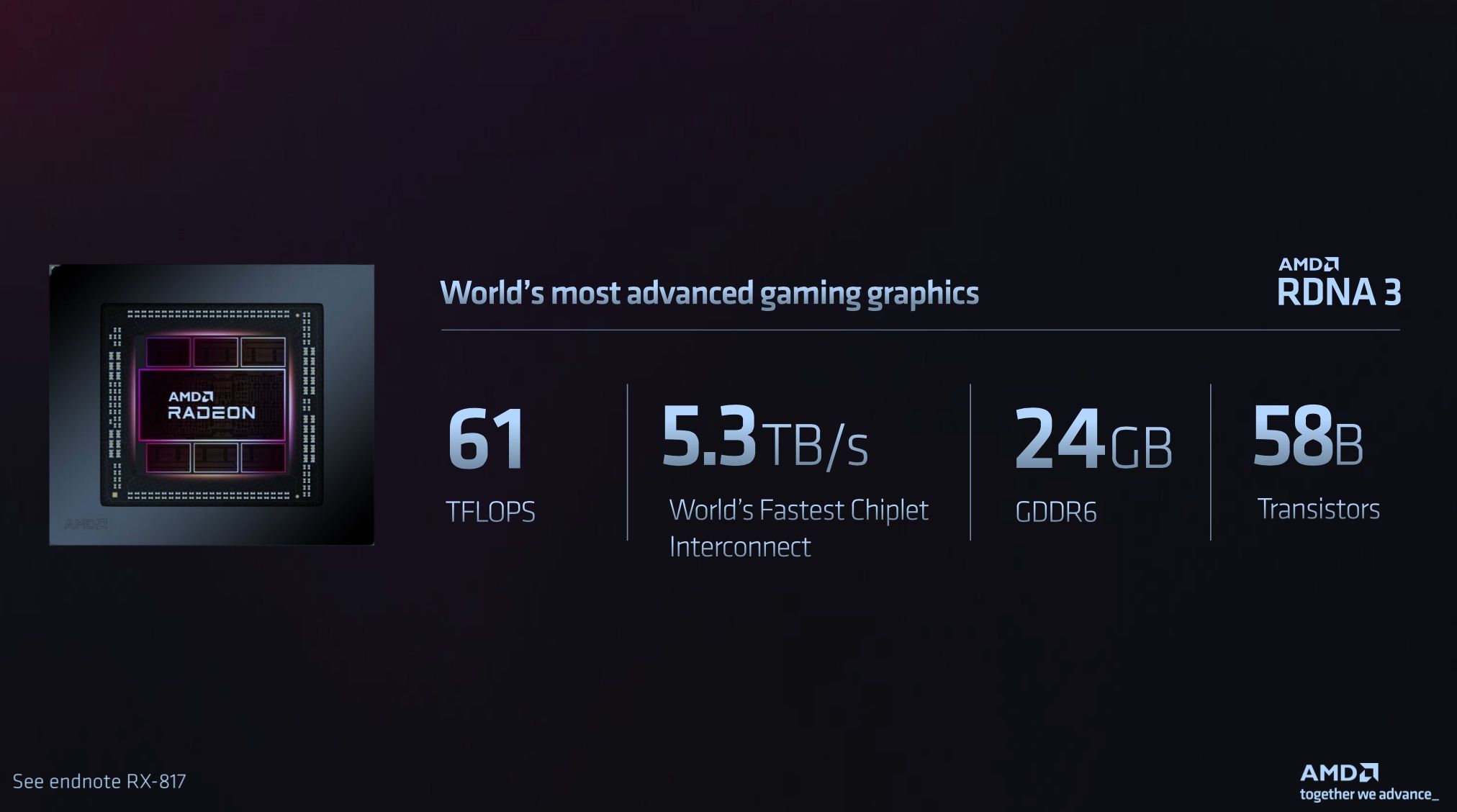 As such, the RNDA 3 GPU sees, according to AMD's own internal numbers so take them with a grain of salt here until independent testing is out, a 54% increase in performance gen on gen versus the RDNA 2 line of GPUs. This continues the trend line of each successive RDNA generation providing at least 50% more performance per watt over the previous.

With AMD's RDNA 3, the two chiplets work together, with the gaming die making the most of the 5nm silicon, which powers the shader engine, as well as the new display and a new dual media engine which allows for both encode and decode AV1. Meanwhile, the memory die uses the 6nm silicon die and powers the 96MB of 2nd Generation of Infinity Cache, as well as the 64-bit memory controller that allows up to 5.3TB/s.

The new Radiance Display Engine helps to power the DisplayPort 2.1 connection, allowing for bandwidth speeds of up to 54 Gbps on display links, while the new dual media engine on the GCU allows for simultaneous Encode and Decode on the GPU when using AVC or HEVC, as well as 8K60 AV1 encode and decode for high-end content creators.

RDNA 3 has 58 billion transistors, with AMD stating that it has 165% more transistors per mm squared than the previous generation, all to better power gaming performance. The new die features 1.5x Vector General Purpose Register file (VGPR) performance, as well as 64 Dual Issue Stream Processors, new AI accelerators, and 2nd Gen RT cores to power intense ray tracing applications. The new SMID units offer 2 times the instruction issue rate over previous gen, while the AI accelerators are two per compute unit and allow for up to 2.7 times the performance of AI applications. 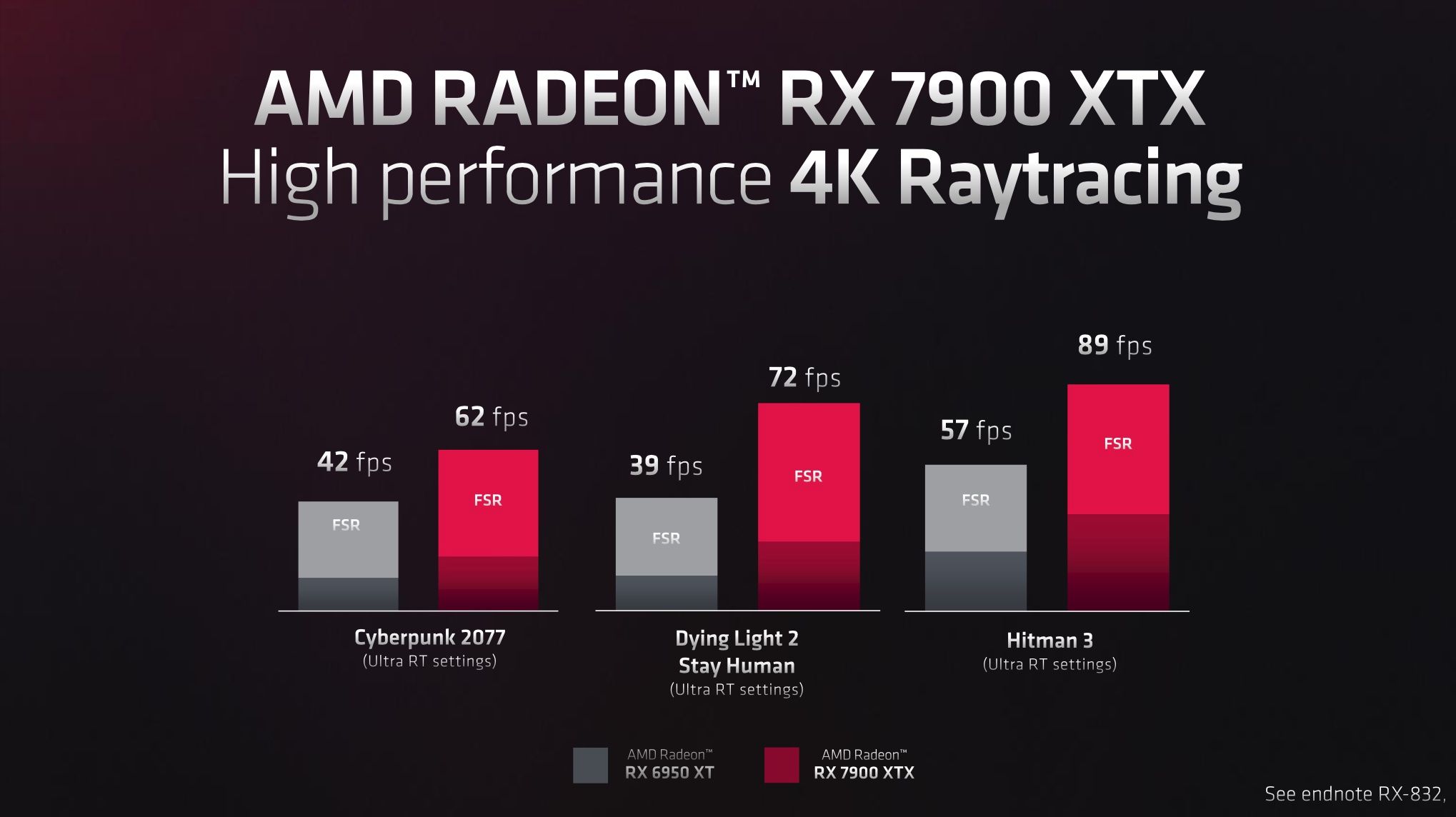 Ray tracing is obviously a hot-button topic for gamers, especially those looking at the most advanced gaming applications with AMD touting 50% more performance per CU in RDNA 3. During the presentation, AMD showed internal framerate numbers (again, take them with a grain of salt while independent numbers come later on), seeing games like Cyberpunk 2077 have an increase in performance, with 4K rendering using FSR, at 4K Ultra Ray Tracing hitting over 60FPS average. 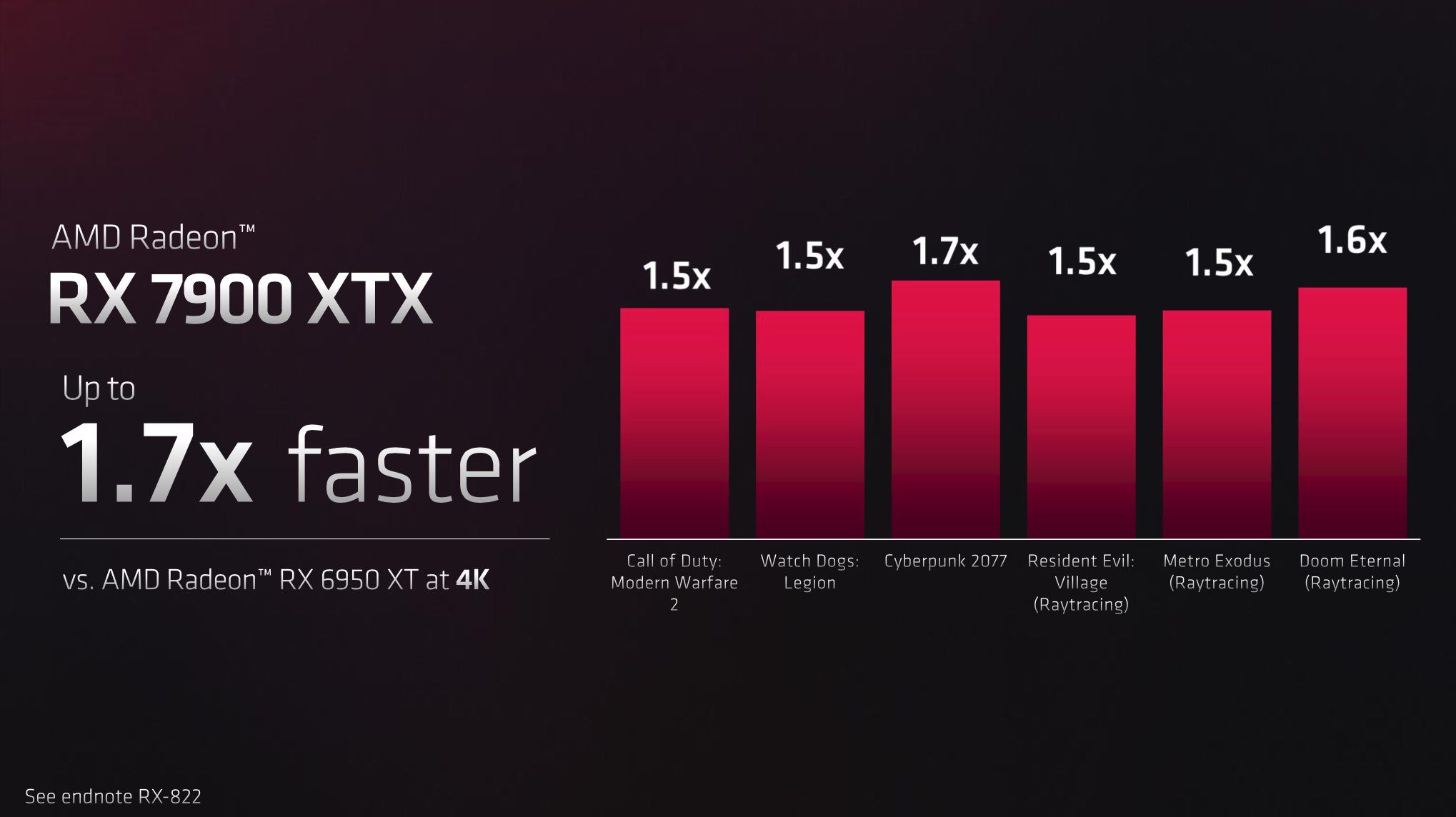 AMD shows in their internals the Rx 7900 XTX hitting up to 1.7 times faster performance over the RX 6950 XT, the RDNA 2 flagship card, at 4K. Games like Resident Evil: Village, Metro Exodus and Doom Eternal show a 1.5 to 1.6 times increase when raytracing, according to AMD.

During the presentation, AMD made a big deal over the fact that the RX 7000 series is "easy upgrade," very obviously taking a swipe at competitor Nvidia's massive RTX 4090 GPU that has necessitated in many the need to upgrade to larger cases or newer power supplies. The Rx 7900 XTX and XT will feature standard 8-pin PSU connectors, hopefully avoiding the same fate as many of the adapter connectors on the Nvidia GPU, while also being only slightly larger (at least the reference board) than the 6950 XT. 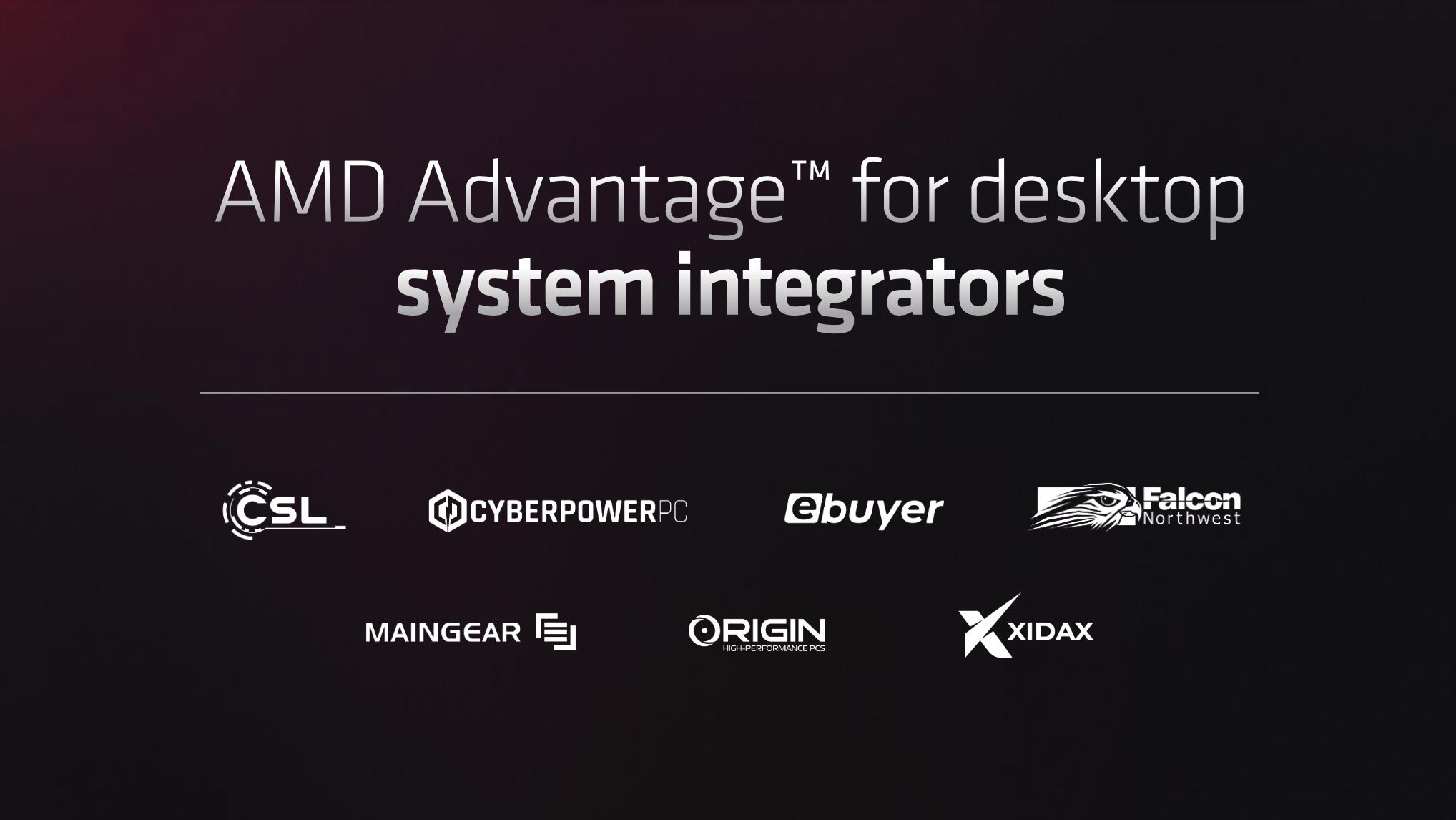 AMD also announced it's expanding its AMD Advantage line of laptops, as well as launching AMD Advantage desktop with liquid-cooled Ryzen CPUs, 2TB+ NVMe Storage, and more. The company is working with system integrators like Falcon Northwest, Origin, Maingear, and more to bring these new desktop options to consumers who just want to buy a rig and go versus building their own. 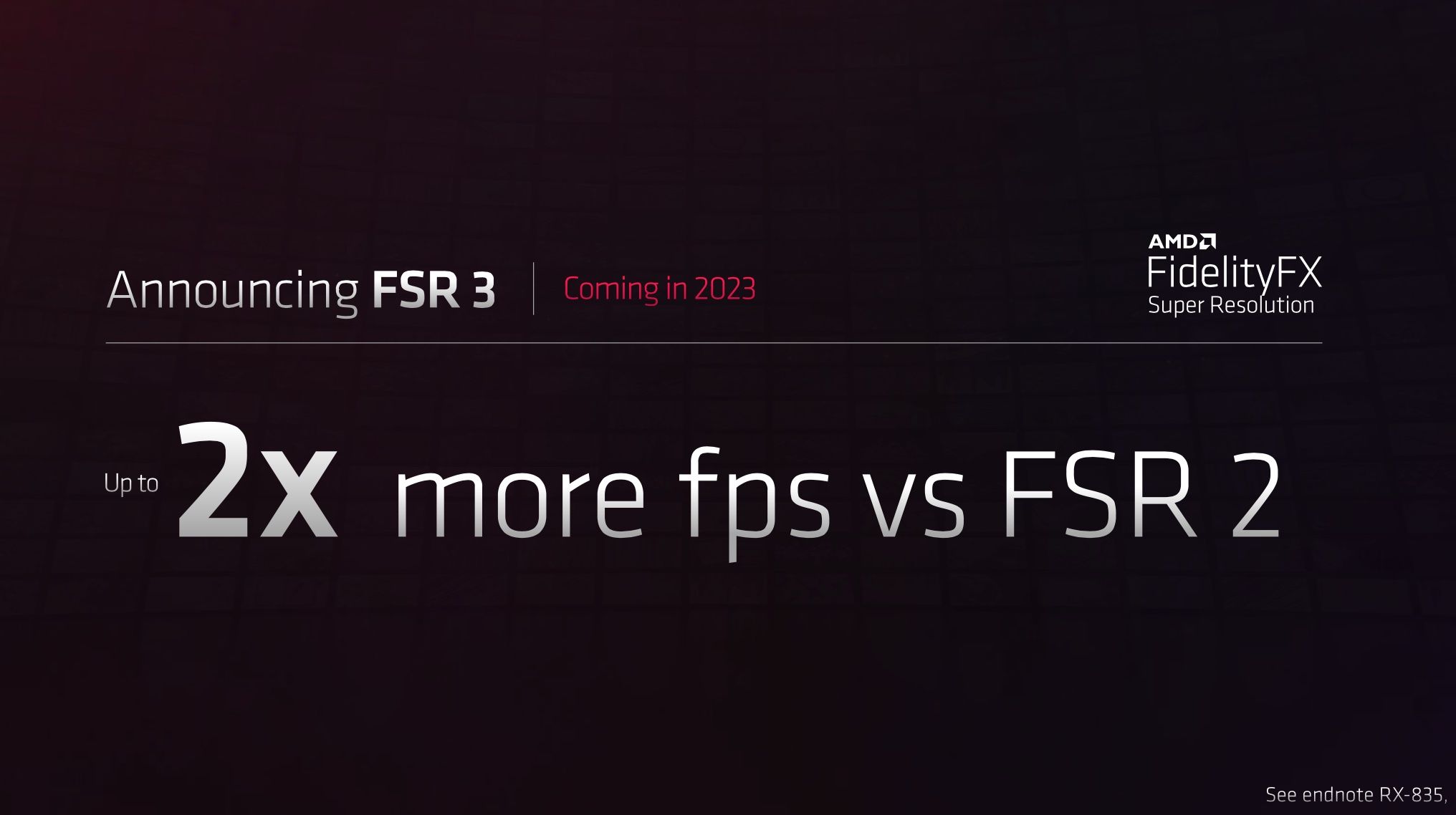 FSR 3 was also touched on, albeit briefly, with AMD stating that the next evolution in its FidelityFX Super Resolution offering is coming in 2023 and will offer up to two times the performance versus the current FSR 2 standard. During a Q&A, AMD also confirmed FSR 3 will feature a new Fluid Motion Frames technology,  confirmed to be frame generation, though they weren't ready to dive into the specifics of what exactly they were doing or whether they were leveraging the AI Accelerators on the RDNA silicon.

A new feature called HYPR-RX was also announced, seeing a unified way for games to easily toggle a host of AMD features, including Super Resolution, Anti-Lag, and Boost in-game, assuming it supports all of these features. 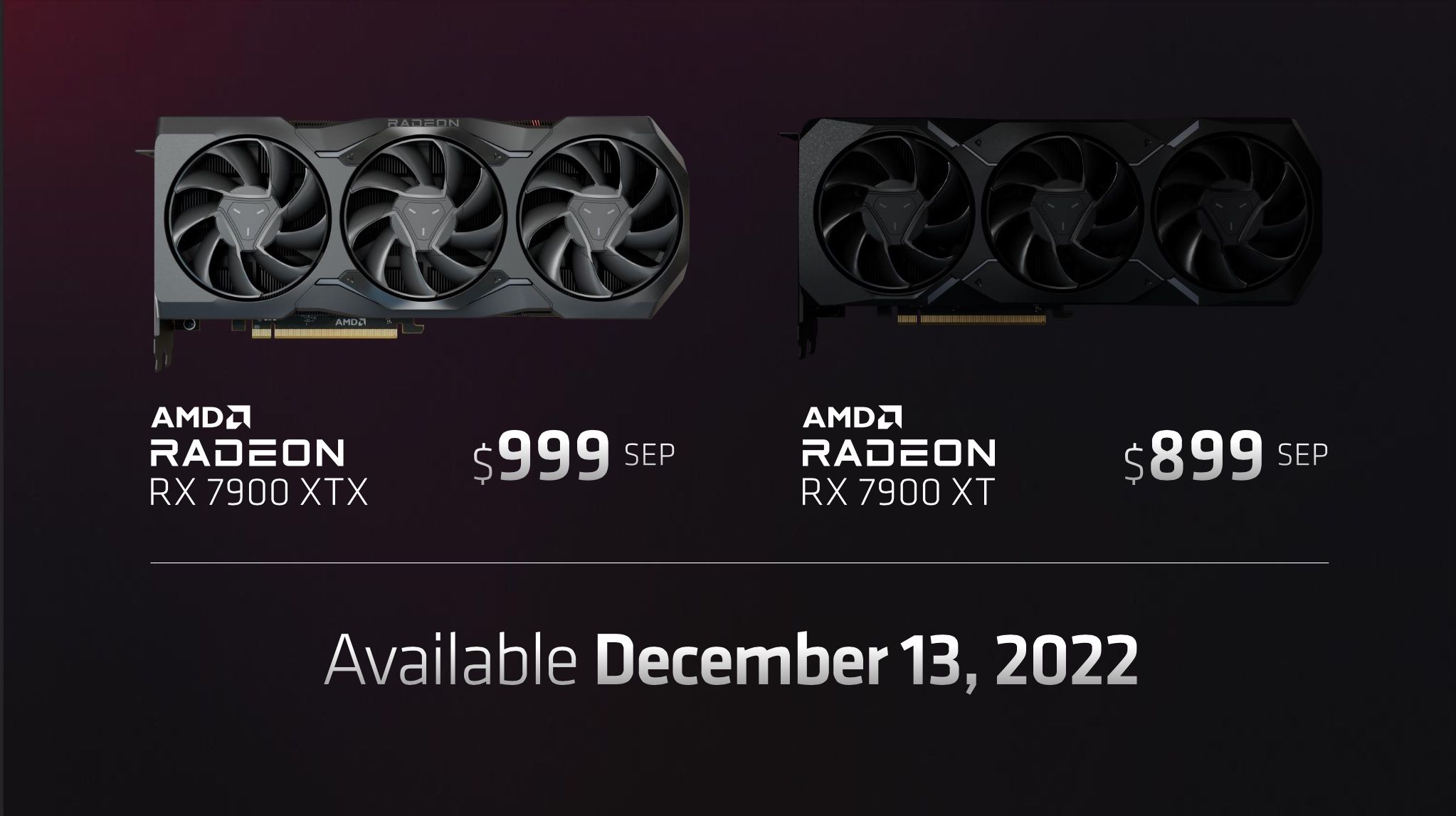 The Rx 7900 XTX and 7900 Xt will be available on December 13th, and AMD also states they hope to have a stable supply chain, but note that with the world still recovering from the pandemic that disrupted shipping and supply chains around the world, but they are potential buyers will have the ability to purchase all through December and into 2023.

You can check out the full presentation in the embed below.