With promises of low temperatures to keep your precious CPU safe from heat’s harm, AiO (or All-in-One) cooling solutions are becoming the ubiquitous choice for CPU cooling. As more and more consumers are dipping their toes into the world of PC building, AiOs are becoming just as commonplace within in home-built rigs as RGB lighting. Into this market, ZADAK introduces the 240mm SPARK AiO Liquid Cooler. We are got our hands on this rarity for today’s review.

The ZADAK name has only been floating around for about five years now. Born out of a passion for design and PC modding, this branch of Apacer set out to share a passion for water-cooled computers and cases with the world. With a commitment to pursue this goal through bold ideas and exploring the curious edges of possibility with clever attention to detail, ZADAK releases the SPARK line of products.

You read that right: the ZADAK SPARK isn’t just an AiO, it is intended to be a series of products designed to tell a story together, but fully capable of assimilating into any system individually. You may spot it within some of the product pictures, but we will be reviewing the ZADAK SPARK RGB DDR4 RAM kit in the near future.

Included with the AiO are a variety of mounting rings and the associated hardware to make mounting happen along with two ZADAK-branded fans. There is also an internal controller hub for the fans and AiO to connect to. Extension cables for the RGB system to interface with the controller and a cable to connect the controller to a 5V motherboard header are also in the box, as well. But before we go too far, I want to talk about the fans for a moment.

The AiO is clearly the star of this show, but the fans play a decent supporting role. They may not be the strongest fans on the market, but they are fairly quiet and they look really sharp. They have an RGB ring around the core fan housing to provide a little extra bling to your machine. The lighting effects are smooth and present, but they aren’t gaudy. What makes these fans a bit more intriguing is that besides the fan header, they have a split 3-pin ARGB cable with both a male and female header, respectively. This means that you can chain 5V RGB recipes together on a single connection if you wanted their appearance to be controlled simultaneously. A neat feature for a little bit more control. 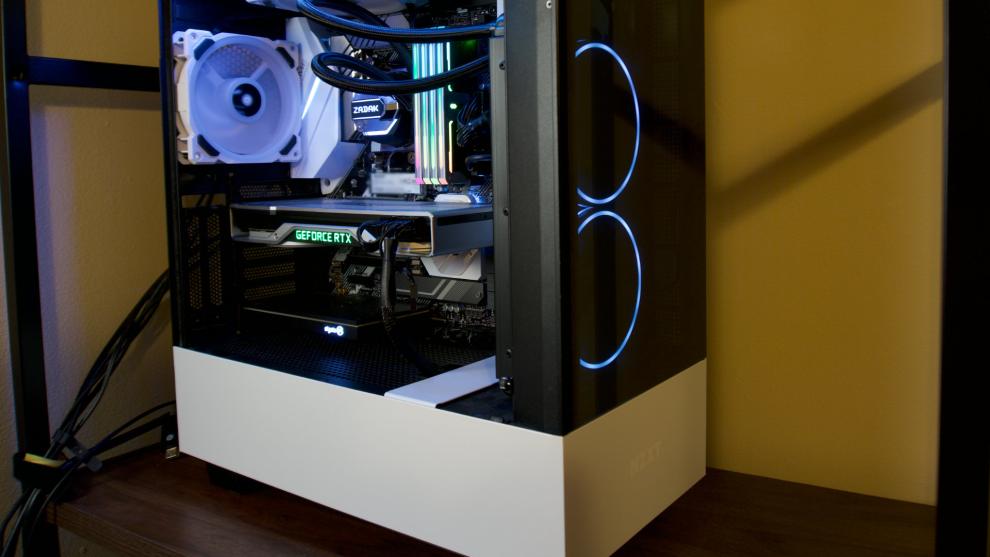 Installing the SPARK AiO was pretty simple thanks to the Asetek pump’s design and interchangeable mounting rings. I did have to remove the ring it was shipped with to replace it with the one designed for an AM4 socket, but that is as simple as turning it the appropriate direction, removing it, and then clicking the correct ring into place, making sure the ZADAK branding was upright.

Once that was done, a series of mounting studs were affixed to my motherboard’s backplate, replacing the stock AM4 mounting brackets. With thermal paste applied, the AiO was set straight down atop these studs and thumb screws were tightened down to secure the CPU cooler in place. Thanks to the removable front panel bracket in the NZXT H510 Elite PC Case, the radiator and fan mountings were a breeze.

It was a fairly simple process… for the most part (more to come on that in the conclusion), albeit, removing one AiO to replace with another is a bit more cumbersome when dealing with all of the cabling. For a fresh install, it’s hard to beat a system that is both tool-less and enables you to slide the AiO straight down onto the processor.

Our cooler testing looks closely at comparative temperature while idle as well as under heavy load. The testing environment is a controlled 22 degrees celsius with coolers set to their highest performance capacity. We are collecting load temperatures from the CPU after a twenty minute test via Prime95. This gives the fluid within the AiO a chance to warm up. The temperatures charted believe show the temperature increase over ambient.

Here is how the SPARK AiO looks compared to other AiOs on the market:

(It is important to note that the testing benches used to collect the comparative data was different. However, the conditions of the testing were meticulous replicated as best as possible)

Before I talk about the numbers, I have to go back to my earlier statement about installation. If the SPARK AiO has a fatal flaw it is that there is not a fan splitter cable included in the box. That doesn’t sound like a fatal error until the fan cables fail to reach the headers on your motherboard or if your motherboard does not have enough headers to support radiator fans alongside any other case fans. Fortunately, this wasn’t an issue for me - I had a splitter. However, this could be a setback for a new system builder.

When it comes to the results of our testing, despite having one of the coolest comparative temperatures while idle, the SPARK struggled a little under load. While it still held a 4 degree Celsius lead over the Noctua air cooler and edged ahead of the Cooler Master Master Liquid Pro, we did not see temperatures as low as we would have liked to.

That being said, Prime95 is brutal to CPUs and indiscriminately unforgiving to coolers. The conditions it throws at both are not anywhere near “normal conditions” for average users. The numbers we got could have less to do with the pump itself and more to do with included fans. The airflow that they provide are far inferior to those found in one of our more recent AiO reviews.

The Prime95 wasn’t the only consideration when looking at operational temperatures. We kept a close eye on the SPARK AiO while gaming and the performance we saw there told a much different story. At its highest, we only saw CPU temperatures spike up to 44 degrees Celsius. That was more of what we wanted to see and it delivered!

While the ZADAK SPARK AiO is not quite available yet in a North American market, it may be worth a look once it officially lands. While ZADAK’s included fans are not the most powerful pairing for this AiO, for us, the performance we saw and the low noise we experienced from them make the compromise worth the consideration - especially in environments where system noise can be a factor. At the end of the day, the ZADAK SPARK AiO delivers just enough cooling support to keep your CPU going.