Phones, routers, monitors, and now home projectors. Chinese tech giant Xiaomi is bringing its Mi Smart Projector to your home and we decided it was time to go large and have a look at this new big picture offering.

When console gaming on the latest monitor is uninspiring and stream at home cinema experiences don't quite compete with the real thing, it might be time to think about ditching the realms of QLED, Nanocell, and IPS paneling for something that brings some real scale to home entertainment. With the arrival of the Xiaomi Mi Smart Projector, the Chinese tech manufacturer is aiming to move media from your phone screen to a much bigger format.

The Mi Smart Projector is a 1080p LED projector that, on initial inspection, looks likely to bring the benefits of a huge high def TV to anywhere that might have the space to host it. Weighing only 1.3kg and measuring only 15cm tall, the Mi Smart Projector is something of a compact upgrade to more mainstream fixed displays that might very well ratchet up the immersion to another level thanks to the following specifications.

The compact configuration of the Mi Smart Projector is evident before even opening up the box. Designed to fit into even a small living space, the Mi Smart Projector barely takes up much more than its advertised width when still unopened. Slipped out of a cardboard case and a plastic sheath there is, thankfully, little more here than what is required to get up and running. The projector itself is accompanied by a power cord, a very thorough set of documentation, a warranty card, a remote control, and no batteries. 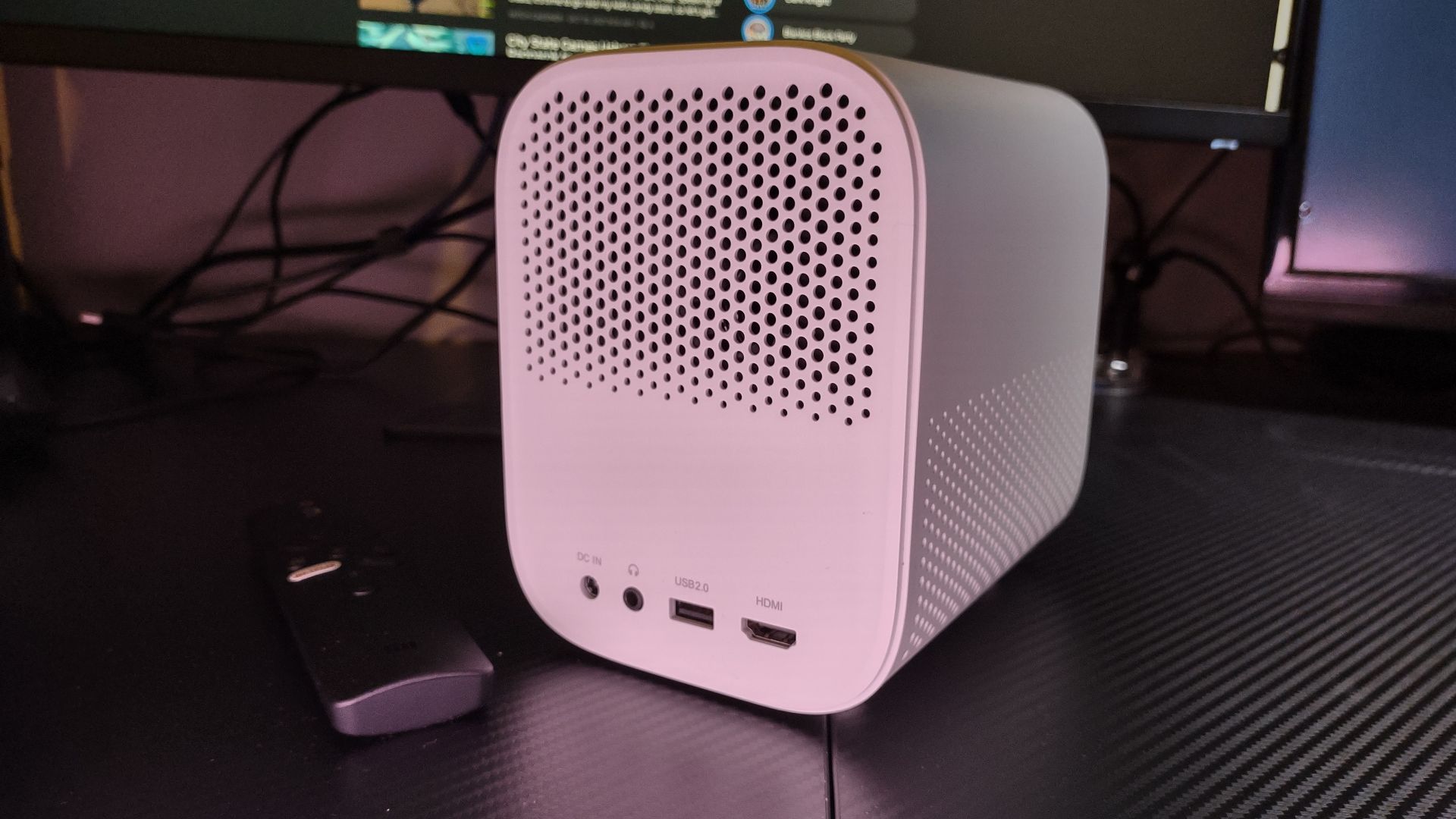 While there is still some serious audio design inside, a minimalist plastic exterior leaves just a twin set of perforations on either side of the white case to announce the speakers. The other exterior holes on this smart projector can be found at the back of the box, where the input ports are aligned, and on the bottom, where a single mounting thread is situated. The rest of the other shell is simple rounded edges and not even a hint of flashy branding. The front face of the Mi Smart Projector is a slightly different aesthetic. Instead of a solid plastic shell dressed in white, the grey fabric front of the Mi Smart Projector screams everyday living and understated design. This isn't meant to one-up the latest gaming monitor. Instead, the Mi Smart Projector will modestly blend in among any Swedish lounge combo or atop your Uppspel side drawers.

Intruding Into The Front Room 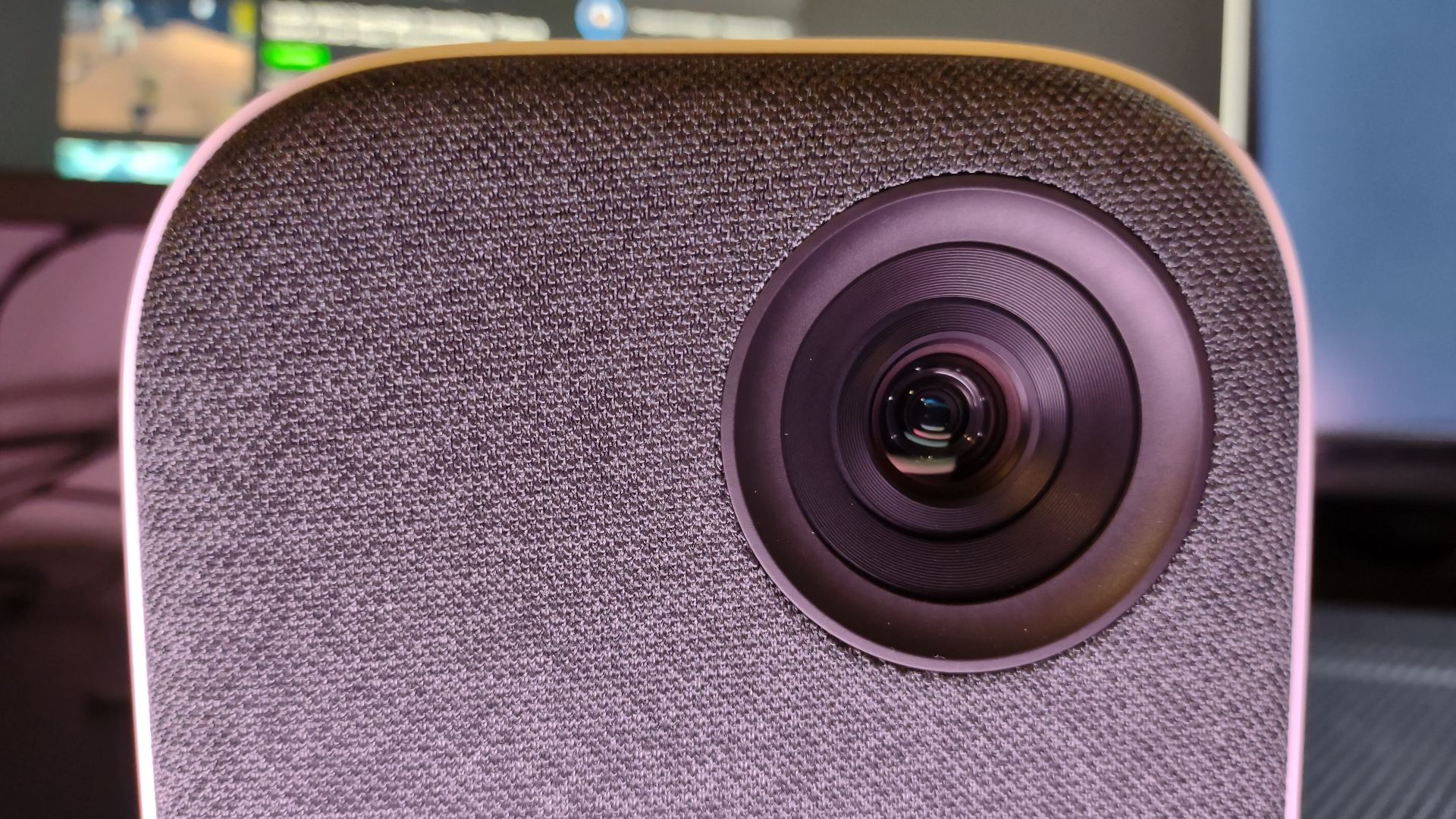 In every essence, the Mi Smart Projector is an effort to integrate a big view into home spaces, rather than home cinemas. Getting through the initial config is a few steps and from the moment the Mi Smart Projector is turned on it’s clear that swapping from a TV to a projector is designed to be easy. While things can be a little sluggish on starting, getting anything up to a 200-inch picture configured is barely a few minutes of work.

The integrated power button begins a warm-up that takes seconds and an audible, but just about perceptible, fan spins up. The Mi Smart Projector will step through a set of autofocus and sizing tests to find and fit the space it’s in. While the success of this process is somewhat down to the environment and angle of the device, just throwing this kit up against a set of wardrobes resulted in a watchable picture without any manual intervention. Tweaking changes are possible, and the Android TV OS provides manual adjustment of tilt, screen size, and focus with just a few button presses of the included remote, even when the incremental change felt somewhat slow.

The size of this projector gives it plenty of flexibility in form, allowing you to deploy it mounted on a wall or ceiling, or simply throw it on a tabletop across the room. The position of the lens at the top of this device allows it to sit nicely atop a side table and shouldn't require any serious hardware to get started, substantially lowering the barrier to entry for an everyday consumer. The space required for configuration is impressively small too. The Mi Smart Protector has a 1.2:1 throw ratio meaning that with just a couple of meters of distance, you’ll be able to fill a wall anywhere from 60–120 inches. In reality, that means that we introduced the Mi Smart Projector into a bedroom with just barely 2 meters in length and easily accommodated a picture that would have cost thousands with a TV frame. 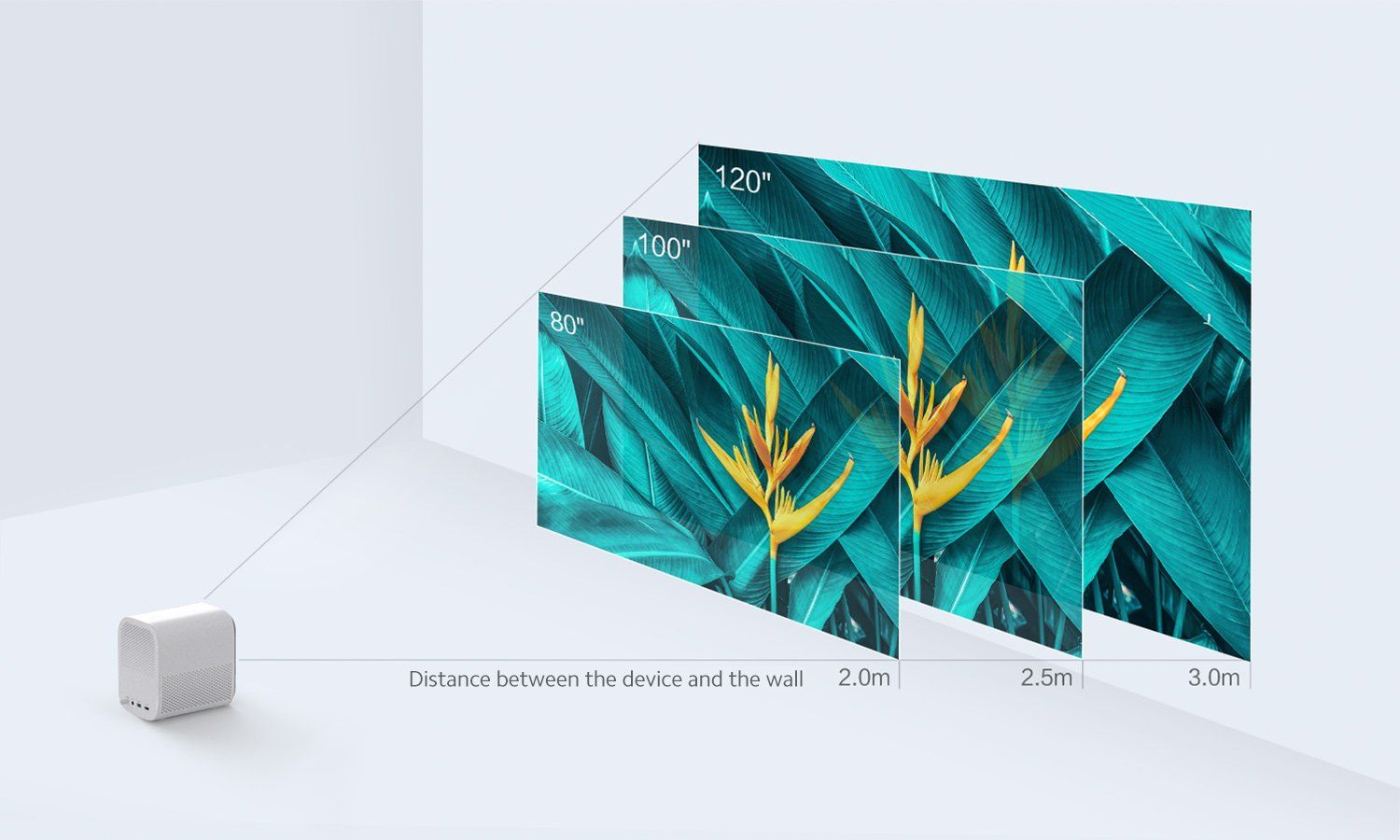 Once set up, navigating the Mi Smart Projector is simple enough. It comes pre-loaded with Android TV, meaning sign-in and synch of preferences is seamless. Hooking into Google Home and connecting the integrated Chromecast capability is effortless. It also ensures all major Play Store apps are available immediately, meaning there’s no delay on a big night in.

After a weekend with Geralt both on Netflix and in-game, I’m genuinely impressed by this tiny tabletop option. While this Xiaomi device can be mounted thanks to threads on the underside, it’s really best placed on a shelf or tabletop, acting as a flexible entertainment center that can do everything on its own. The Mi Smart Projector does a wonderful job at recreating on-screen action, and while Xiaomi doesn’t advertise the color reproduction I’d happily say it’s close to any major name monitor brand we would normally review.

The LED brightness managed well almost all of the time, except when light started to intrude, thanks to the four-channel RGB and Blue Light path output of this device. Don’t expect the Mi Smart Projector to be revolutionary. It will need a decent level of darkness to provide an optimal result, but the solid HDR10 support that is on board is worth closing the curtains for and the Mi Smart Projector easily avoids many of the patchy alternatives that more inexpensive 4K televisions offer up.

When perusing Netflix or picking from the Google Play library, the Mi Smart Projector is astounding viewing. When gaming, there are some caveats. AOC, Asus, and even Xiaomi make displays that will render the world across 27 inches of glorious 4K, but this isn’t quite the same scenario. Strewn across 90 inches of 1080 High Definition, gaming is utterly immersive, and thanks to the Texas Instruments TRP square pixel architecture there are no odd angles here either. A massive play space makes for some great experiences, and the bustling edges of Midgar seem set to swallow you into the action when playing through Final Fantasy VII Remake. However, don’t expect this to hold up in highly competitive situations. For local LAN play or a friendly punch up this projector might be fine. Even mid-tier ladder matches could cope without a worry, but without a dedicated Game Mode to bring latency down, this might present a higher than acceptable delay for some of you and could cost crucial competitive moments.

Audio, much like video, has some limitations but does a fantastic all-around job. The ambient fan once warmed up kicks things off at around 25 dB at a 45 cm distance from the device. Watching the odd movie, we brought human conversation in at anything from 30dB right up to nearly 90dB fully cranked and the neighbors aren’t going to accept anything louder, even for science.

Despite the loud noises, crystal clear audio is the focus of the Mi Smart Projector rather than adding an imposing presence. The Mi Smart Projector houses two highly sensitive 5W speakers and an integrated sound chamber that runs the length of the internal casing. This makes for a final product that is far more than the sum of its parts, giving a rich and full reproduction of the in-game or out of sight activities than I expected. The spatial position is, again something I was not expecting. The addition of dual-track virtual surround sound stereo, as well as Dolby and DTS decoding, make this a truly enjoyable experience. The one caveat comes in the form of bass power. The Mi Smart Projector lacks some presence and that is down to the bass. Understandably, Xiaomi chose to lean more towards mid-range and human vocal clarity, so if you’re expecting to feel the intensity of Dunkirk or the crashing metal of two mechanical giants as they stomp across your home this is worth considering. There isn’t really a way to solve this either, the Mi Smart Projector is an all-in-one package, meaning that adding or expanding upon the basic build is not an option. Sure integrated ability to turn into a Bluetooth speaker is great and google assistant is always useful, but a wider range of audio outputs would also be appreciated.

Taken as the package it is intended to be, the Mi Smart Projector is an astounding piece of kit and a great first step into a more immersive entertainment world. If you worry that you’ll be making a downgrade to High Definition from the latest budget 4K 50-inch model, then forget your expectations. This projector isn’t going to change your world and I will be keeping my monitors right where they are for desktop gaming, but if you’ve got the space and don’t want a great plastic behemoth taking over the front room, then the Mi Smart Projector is a well priced, stylish, and compact option that is casually entertaining of a grand scale. Find out more about the Mi Smart Projector on the official website now.