After an impressive start back in August, Xiaomi is out to upgrade your home networks once again with the AX3000 Mesh Wifi system, a potential accompaniment to the blisteringly fast AX9000 router rather than an outright replacement.

Having the best internet on the block is all very well and good but it’s not going to overcome your lag if you're in-home access is bronze tier. For many of us, that means tackling the ethernet jungle or just simply putting up with patchy wifi capability when away from your main modem. For those moments where slow spots throw your PUBG play into the dark ages or wretch you out of Teyvat, mesh wifi could be the answer. Now, Xiaomi’s newest arrival looks likely to bring the amazing pace of Wi-Fi 6 and the coverage of a seriously competent mesh system together at a pretty reasonable price. 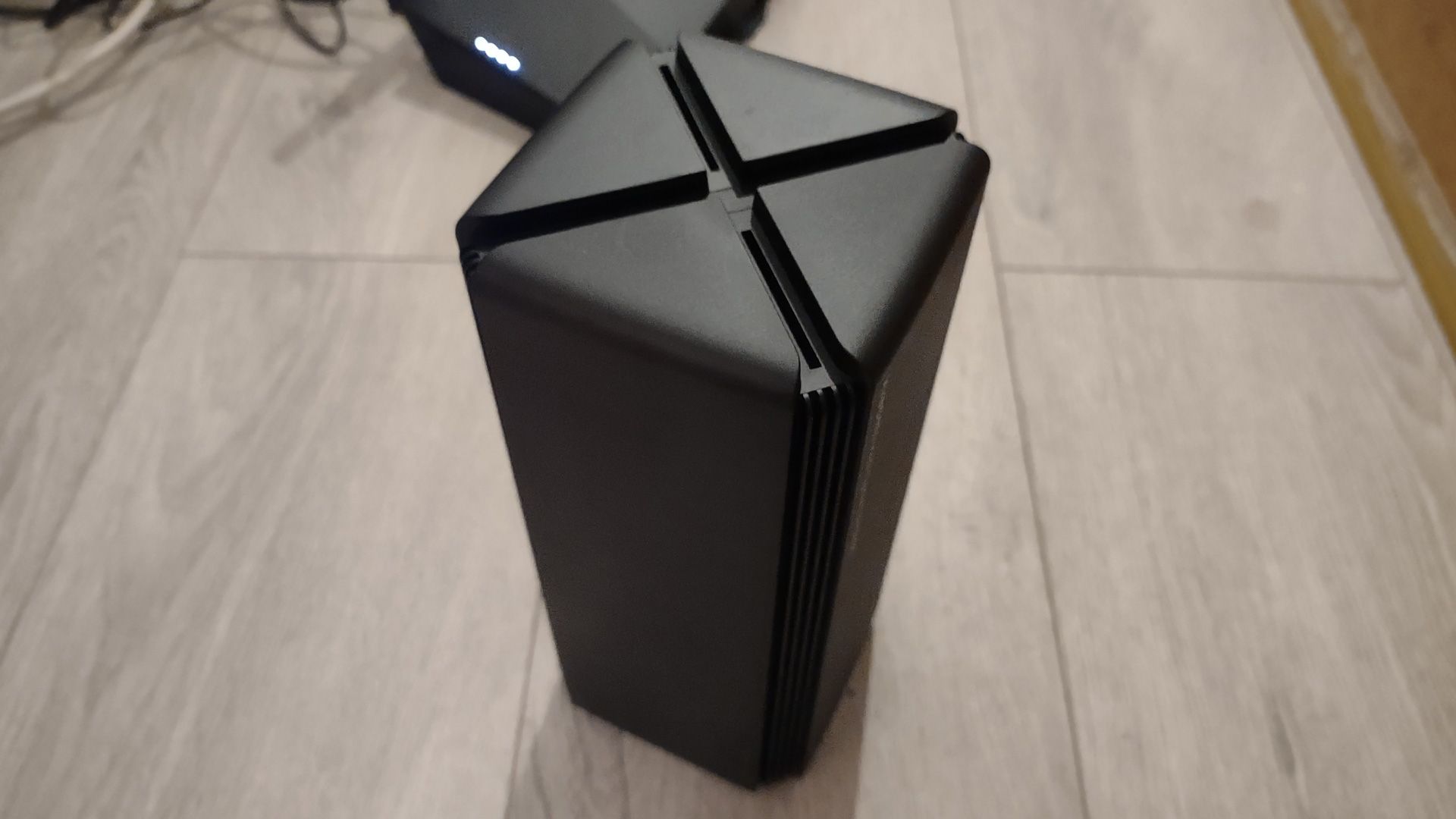 Getting the AX3000 Mesh system out of the box is a straightforward job. So much so, we didn’t even bother with an unboxing video this time around. The cardboard containing the AX3000 kit slips open with little fanfare and it's pleasing to see that Xiaomi has decided there’s no need to fill this carton with plastic waste. Instead, it gets right to the core of this review, two sleek-looking black boxes. These two towering bits of network kit defiantly stand apart when placed around the home. Taking some inspiration from the AX9000, but looking a tiny bit less aggressive, their angular forms cut into a room with a mix of tall radiator fins and matt black panels. Segmented into four sections by a crossed set of fins, the black plastic shell seems to entirely surround a pair of boxes that aren’t going for a placid facade. These two scream speed, with a little modern cyberpunk inspiration. This might put off anybody looking for a more subdued aesthetic, but there's nothing unnecessary about the AX3000 units, with just two LEDs on the front of the repeaters, a set of network ports, and a power cable at the back.

Thankfully the setup for this brand new mesh wifi system is equally sublime. You can expect to plug the WAN port of an AX3000 into your existing router’s LAN port to pickup network connectivity over ethernet, then it’s all about configuration. Just like the AX9000, there are many routes to the end goal, but here I found connecting to the default SSID and using the web interface is the simplest avenue. The benefit of the alternative Xiaomi branded home app is a fully connected ecosystem, and with space on your network for 254 devices at once that’s a lot of smart in your home. For anybody just wanting to plug a hole or simply append an existing system like mine, the web interface works wonders. Connect to the default SSID, skip through a couple of setup screens and you’ll have a newly configured network in your house in under a couple of minutes. Adding extra AX3000 devices is even easier, with a push-button on each of these devices that automagically pairs newly added nodes in seconds. Additionally, if you happen to have a spare AX9000 router lying around and you’re looking to expand your territory then both the AX9000 and the AX3000 nodes can be paired the same way without any fuss. If nothing else, the AX3000 Mesh Wifi system is a breeze to set up.

While the Xiaomi AX3000 system seamlessly connects to an existing network with ease, that doesn’t mean that the hardware inside is just as simple. There’s clearly a lot of work gone into balancing cost and performance and it does show. A set of concealed dual-band high-performance antennas is packed away at the top of each tower providing plenty of data across multiple channels. A 2.4 and 5ghz band are available for different devices and the 160Mhz capability that WiFi 6 affords means much more consistent bandwidth than most standard ISP routers provide. This is, of course, backed by the same OFDMA, MU-MIMO, and 1024 QAM features that we mentioned in the AX9000 review, even if you lose some of the more advanced processing features and range here. Based on Xiaomi’s documentation, the AX 3000 is likely to add plenty of functionality when it appears on the home app upon full release. Until then anybody looking to utilize these devices will either have to lean on the impressive and very intuitive smart repair and routing tech built into the AX3000 mesh system or dive right into the admin console, which is pretty consistent with the AX9000.

If you’re just looking for the bar numbers, then let’s get down to them. The main aim of our testing was to confirm whether the AX3000 built in any bandwidth issues and if the addition of the second factory paired twin made any difference in our worst-performing region. To make this as unreasonable as possible, the AX9000 was ditched in favor of an ASUS RT-AX82U 5400. A server was connected over wifi to the network running iperf 3 and a baseline was taken. We then connected the first AX3000 and checked the comparative bandwidth around the house. Finally, the second AX3000 unit was paired, with the push of a button, and dropped off a floor above the first device.

Do note total scores here are not as important as the comparison as this is largely going to be limited by our server, the iPerf settings, and the performance of the Asus router. You’ll note that the front room remains almost unchanged, while the introduction of the second AX3000 in the weakest “room 2” has a marked improvement on available bandwidth. For anybody worried that these seemingly diminutive numbers might mean a slow signal. We still managed to rack up 587Mbps down on the Cloudflare speed test across these.

For anybody with a Wifi 6 connected household who doesn’t want to shell out a ton of time or money covering the bleaker areas of the office or basement, the Xiaomi AX3000 provides an impressively quick and reliable way to fill in the gaps. These might not be ready to take over from your home router, but they will stop you from having to log out while you’re on a winning streak, all the way down the front lawn.