Over the past few months, we have had an opportunity to check out two different iterations of AMD’s Radeon RX 5600XT - one from ASRock, the other from SAPPHIRE. While this GPU has beed touted as the new hotness for 1080p gaming, we have expressed a bit of concern as far as pricing goes. Well, we got our hands on a piece that slashes the budget without drastically impacting performance: the XFX Radeon RX 5600 XT THICC II Pro. Let’s see how it shakes things up.

Introduced back in January, the RX 5600XT had its sights on the mid-tier market of GPUs. This is no small task for AMD considering what it’s up against. Within this bracket lives NVIDIA’s 16-series of GPUs and the most used GPU for 1080p gaming: the NVIDIA GTX 1060. AMD’s plan has been to create an upgrade path for users looking for that next step in performance without breaking the bank.

Since their release, we have had our hands on a couple variations on the 5600 XT platform, including the SAPPHIRE PUSLE and the ASRock Phantom Gaming D3. What we discovered were two things:

The first is that the Radeon RX 5600XT offered a true successor to AMD’s former Polaris-based (RX 500 series) GPUs in frames per second, power consumption, and thermal performance. This is great new for AMD since the only real successor that we have seen for the RX 580 has been the RX 590… and that was not a major jump ahead for them.

The second thing that we have observed is pricing. The RX 5600XT has been in a very odd position. At the inception of the RX 5600XT, NVIDIA announced a price reduction on the RTX 2060 with a slimmed down offering coming in under $300. With some of the extras AMD’s board partners added to their RX 5600ST GPUs (including last-minute BIOS updates), the value proposition for the RX 5600 XT really came down to features set and preference. This doesn’t even take into account that the higher end RX 5600XTs start to get into RX 5700 (non-XT) GPUs.

What XFX is offering with their THICC II Pro is an RX 5600XT that pears down some of the extras to focus on value. It sacrifices a little bit on frequency clocks and sheds the need for RGB for a sleek, black shroud that can slide into just about any build. Let’s check out how it runs.

Here are the system specifications for our test bench:

We will be focusing much of our test numbers within the 1080p range since the RX 5600XT is advertised as the new GPU for no-compromise 1080p gaming. Alongside of XFX offering, we will be showing numbers from both ASRock Phantom Gaming and SAPPHIRE Pulse iterations of the RX 5600XT. For comparison within the Navi product stack, we will include scores from the RX 5700XT and RX 5500XT in MSI’s Gaming X series. For benchmarks from its predecessor, we will be using PowerColor Red Devil RX 580. We will also be testing these GPUs in 1440p to see how these numbers split the difference between the 5500XT and 5700XT as well as to highlight improvements over the RX 580.

You may notice in a few of our test, we include numbers collected from the RTX 2080. This is to show the higher end of the current market. You will also see numbers from the GTX Titan X (Maxwell). While the numbers collected from the Titan are purely anecdotal, as they were pulls from a previous system build, they are still valuable numbers. Here is why: the Maxwell-based Titan X in gaming performance serves as a performance proxy for the GTX 1070 - what would have been a step up from the GTX 1060.

Our first synthetic benchmark comes from 3DMark Time Spy Extreme. This benchmark shows three of the RX 5600XTs take a massive stride ahead of the 5500XT. As mentioned earlier, this is great news for the 5600XT and represents a true succession over the previous generation. If you notice, in both of out 1080p and 1440p tests, the 5500XT was nearly neck and neck with the RX 580. While the 5500XT is an overall improvement in efficiency, the 5600XT is the truest leap in both architecture and performance over the previous generation.

You will, however, notice that the XFX THICC II Pro does fall slightly behind its counterparts. While the memory clock speeds are the same with the improved BIOS updates, the game clock (1560 MHz) and boost clock (1620 MHz) on XFX’s offering are a bit more slender than the others at 1615 MHz and 1750 MHz, respectively. Our gaming tests show just how this impacts everyday gaming performance.

Fortunately, the answer to that question is this: not a whole lot. During our tests, we used the highest settings available for most titles to capture as close a comparison as possible between GPUs. With these numbers, remember: we are pushing the RX 5600XT to put AMD’s claims to the test about this GPU being the upgrade path for 1080p gamers. Here is a look at the numbers:

Much like its ASRock and SAPPHIRE counterparts, we see XFX’s iteration of the Radeon RX 5600XT strut knockout performance in the 1080p range. With a few exceptions, our tests show stable FPS numbers within the triple digits, not to mention that, in most cases, our tests showed the GPU achieving 60 FPS or more at 1440p! Even in a title that favors NVIDIA GPUs, Shadow of the Tomb Raider, the XFX THICC II Pro Radeon RX 5600XT kept it rocksteady around 70 FPS. 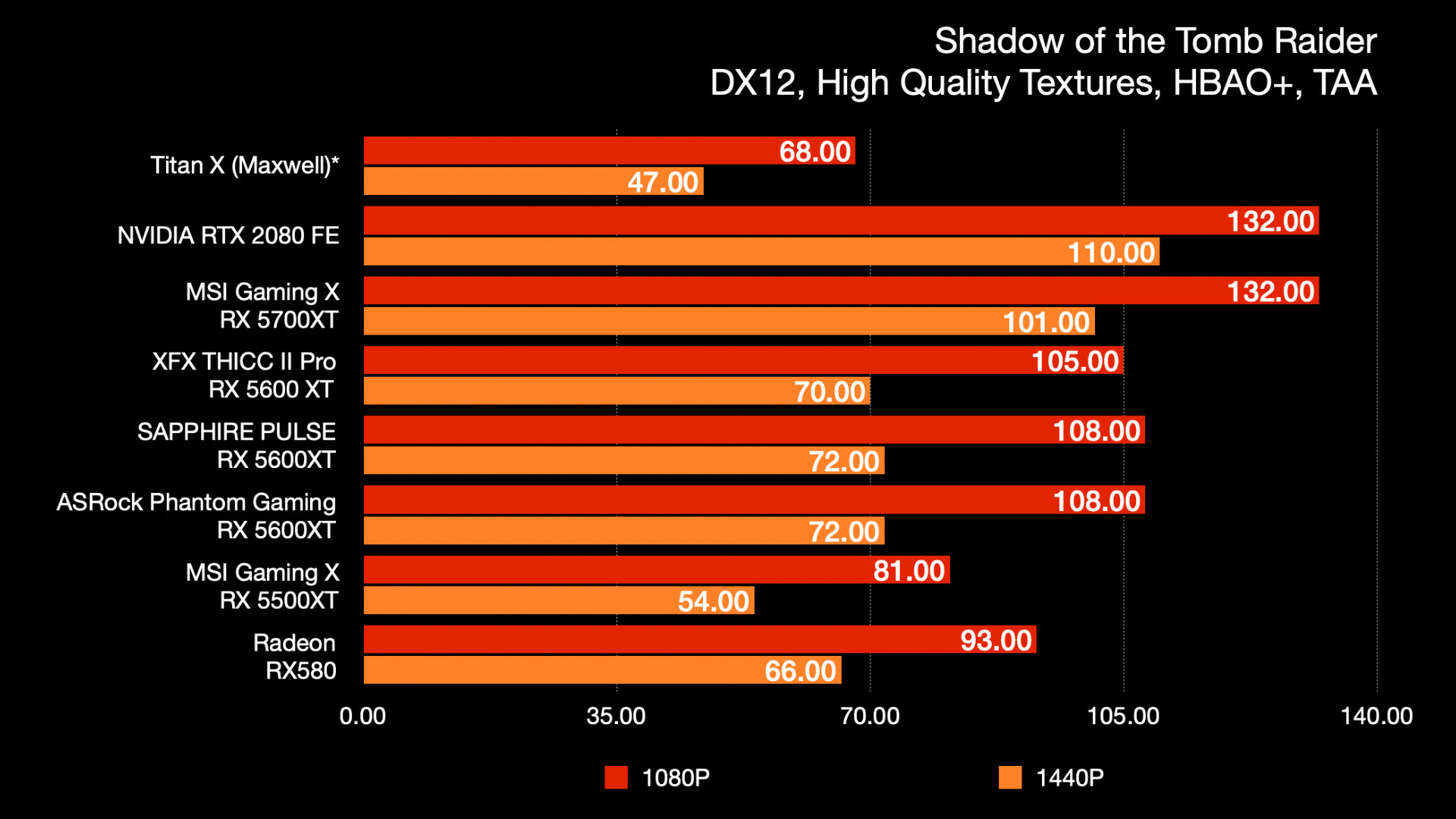 In the Final Fantasy XIV: Shadowbringers benchmark, the RX 5600XT showed off just what it is working with. While both the RX 580 and RX 5500XT are comparable (and lagging behind the pack), the XFX THICC II Pro showed that it, too, can hang with high performance in an MMO setting. This benchmark is a great test for us because of the high saturation of spell effects within it. Even though the combat sequences are littered with barrages of colorful spells, we saw numbers in the high digits in both 1080p and 1440p out of XFX’s offering.

However, this next test is one where we have seen the mid- and lower end RDNA cards struggle. Both the RX 5500XT and each iteration of the RX 5600XT  saw some of our lowest scores in the Final Fantasy XV Benchmark. This is another test that we like for its spell effects and the diversity of the scenes within it. Contextually, this test does favor NVIDIA GPUs and this performance loss has been a verifiable trend within this particular test. We do see the higher end RX 5700XT push beyond the 60 FPS mark at 1440p, but the mid- and lower- end cards just cannot hang.

In Warhammer: Vermintide 2 and Far Cry 5, we see more improvements over the previous RX500-series. Where the Polaris-based GPU targeting the 1080p range struggled, the RX 5600XT cards have shown marked improvement.

Even with a slightly lower game clock and boost clock, we see the XFX RX 5600XT  THICC II Pro pushing its weight around. It only falls slightly behind the competition in performance. It is worth remembering that while both ASRock and SAPPHIRE require the end user to update the BIOS on their GPU, XFX is offering the GPU with the BIOS already updated. However, this update only improves the memory core clock speed.

Thermal performance and power consumption remain king when it comes to AMD’s 7nm process, Navi-based GPUs. From the very beginning, Navi promised to deliver powerful performance without sacrificing efficiency. AMD has no better example of that promise than the RX 5600 XT.

Looking purely at thermal performance, we have seen a steady trend with the RX 5000 series of sustained temperatures in the low 70’s during testing without major fan ramping. The fan tachometer on the XFX RX 5600XT only saw highs around 1600 RPMs while temperatures stayed low.

Looking at this in a gaming setting, in our benchmark that was the most brutal to AMD, Final Fantasy XV, we saw the RX 580 hit 83C with fans blazing at 3,000RPMs. In this same scenario, the XFX RX 5600XT THICC II Pro only hit 72C with fan speeds running - at their peak - a meager 1604 RPMs. Keep in mind: we ran these tests without employing any of AMD thermal management software!

While the fan speeds of the XFX THICC II were not as low as the SAPPHIRE PULSE, its temperatures stayed lower on par with its counterpart. When we look at it from a generational standpoint, versus Power Color’s RX580, the THICC II says around 10C cooler in every application.

In the words of The Commodore’s hit Brick House, this card is built and knows how to please. It is simple in design and even though it identifies as “THICC,” the GPU has a slim, 2-slot design that knows exactly what its purpose is: to deliver powerful performance.

That isn’t to say that XFX made an ugly GPU; its elegancy is found in its simplicity. The copper composite heatsink underneath is teased from the sides of the black shroud and matching backplate. While XFX branding is all over the card, it is neither garish or gaudy. The logos are in glossy-on-matte black tones with the only deviation being the copper logo found at the center of the fans. And for those who looking to avoid a colorsplosion from your PC parts: there is no RGB to found on this GPU.

While this is not a PC component that sees a lot of movement, there are a few places on the shroud that stick out which makes me wonder about their purpose, beyond aesthetic. One of those pieces is near the power connection, making an already awkward piece to reach even more awkward.

If the Radeon RX 5600XT series represents a true leap forward for AMD over their previous generation of GPUs, XFX’s THICC II Pro is the first foot down from that leap. It is one of the least expensive RX 5600XTs on the market today, making it a good entry point for a mid-tier budget build or as a sensible direction for an upgrade from a previous generation of GPU. This no-nonsense card shirks the flashy to focus on providing high frame-rates at 1080p.

It does, however, sacrifice marginal performance compared to its counterparts within the RX 5600XT lineup. It is also worth noting that XFX has multiple SKUs within the THICC II line up with variations of memory clock speed. For reference, the GPU that we reviewed was the RX-56XT6DF46. There is also a triple-fan version as well, but the pricing on that begins to push the GPU into competition with higher tier GPUs.

All points considered, the price point of the XFX RX 5600XT THICC II Pro places it within the Goldie Locks zone. With just the right performance for the dollar as well as a wide enough margin between the competition, if you are looking at the RX 5600XT line-up and you don’t mind a few concessions for the ability to jump up to this tier of GPUs, the XFX THICC II Pro has a winning hand worth consideration.

The product discussed in this review as provided by the manufacturer for evaluation purposes.