Last month, we looked at the Womier K66 and were impressed by its one-of-a-kind light show. Taking it beyond aesthetics, it proved to be a solidly built board that felt great to type on. Today, we have the K87 up for review. It features the same RGB-centric design but it a more user-friendly TKL format, as well as improved double-shot keycaps. Coming in at $79.99, should you choose it over the K66? 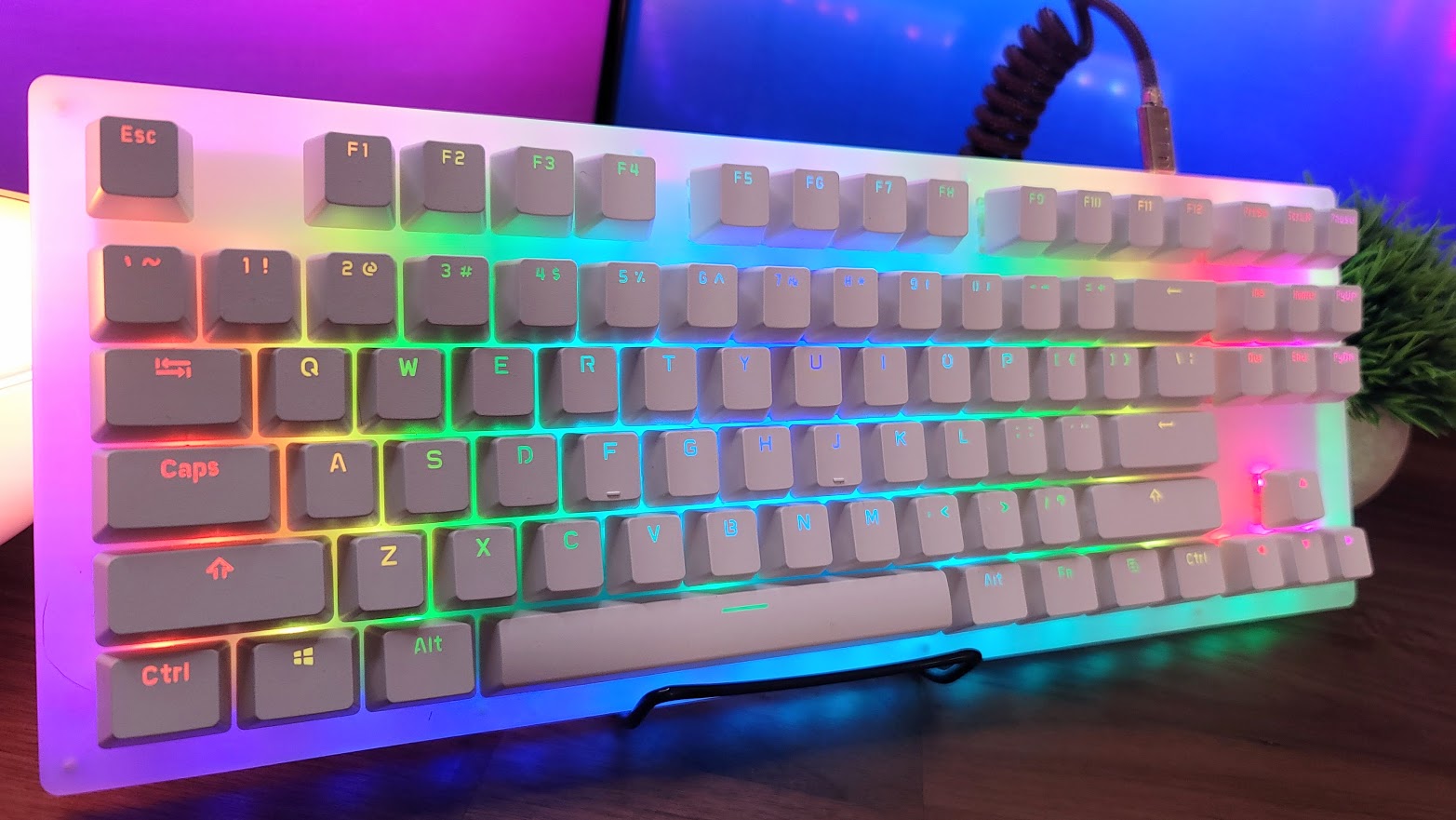 First things first, if you haven’t checked out my review of the K66, you definitely should. For all intents and purposes, these are very similar keyboards, so I won’t be rehashing the same ground in quite as much depth. That said, let’s fire off the basics: 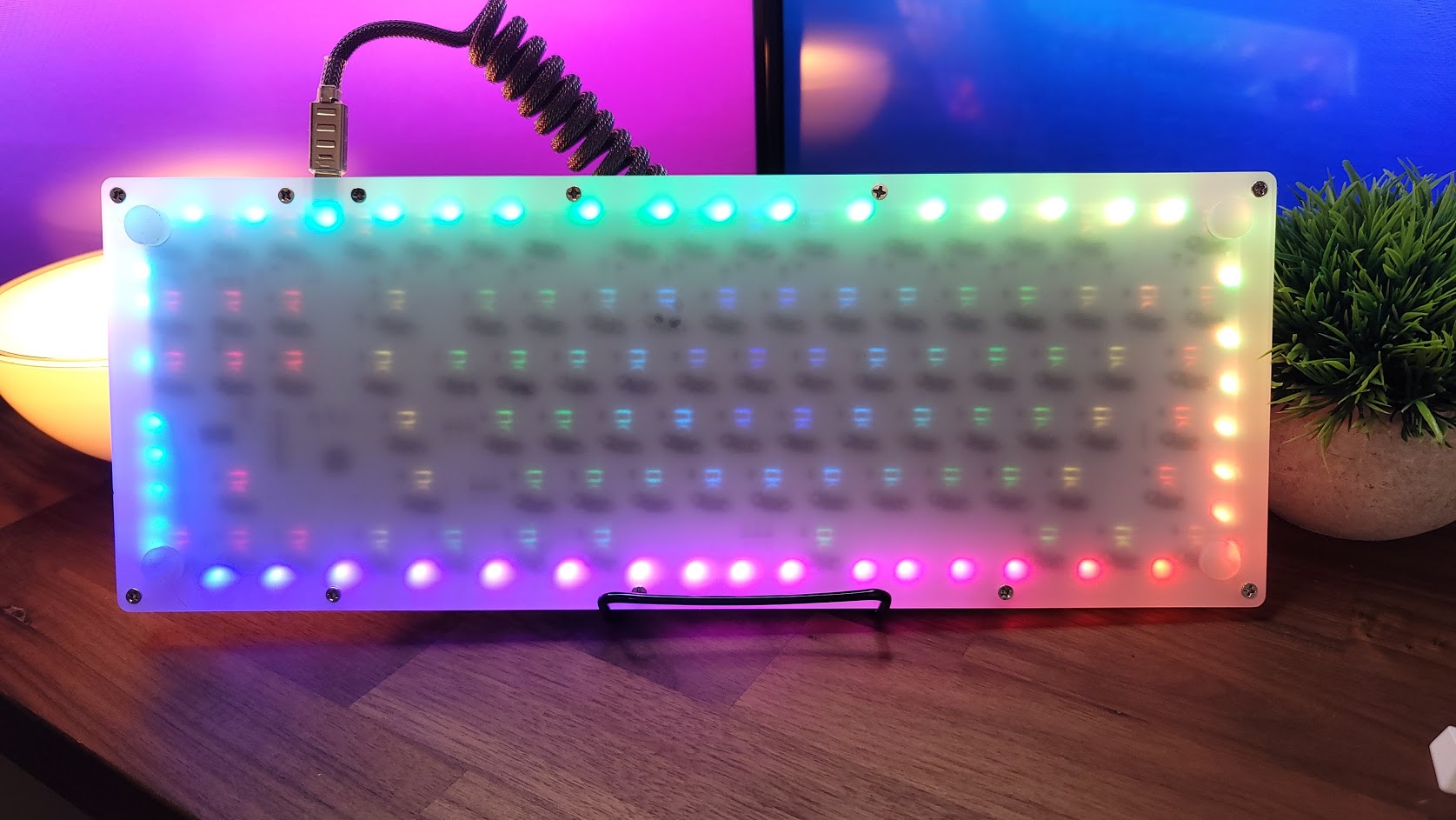 Got all that? Perfect. Let’s go on to what’s new with this board, starting with the layout. The K66 featured a 65% layout whereas this keyboard is a traditional TKL. That addresses one of the biggest concerns I had with the K66: missing keys. That was a confounding decision and is completely fixed here. If you need a full keyset (sans number pad), the K87 is a much safer bet that should accommodate many more people.

This version also adds hot-swap sockets. With the K66 I tested, the switches were soldered in place, so you were stuck with your first choice unless you wanted to desolder which, let’s be honest, very few of us will ever do. On this board, changing switches is as easy as popping out the included switch puller, pulling out one switch and pressing in another. 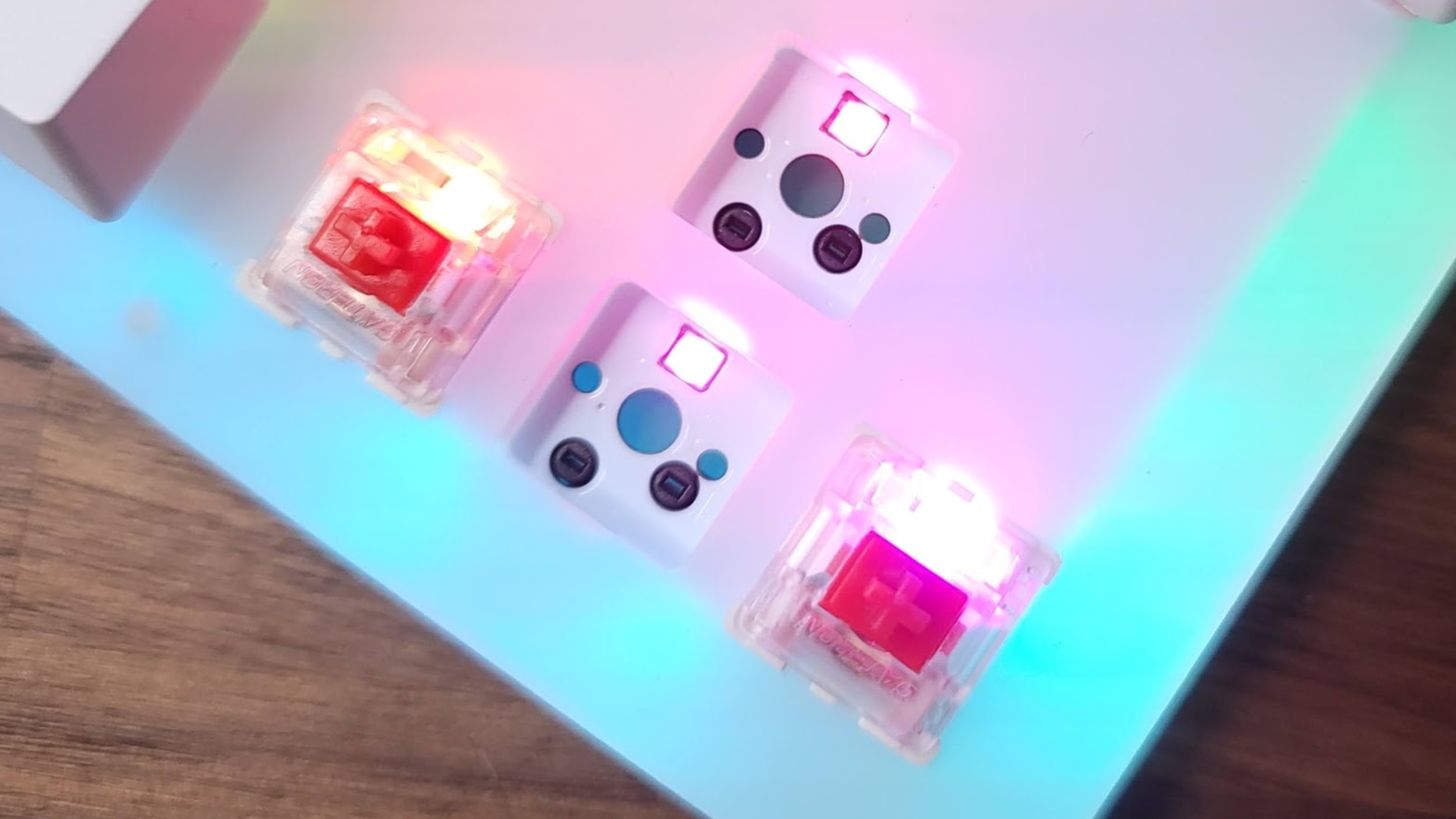 This is a great feature for many reasons and one more keyboards need to support. If you’re new to mechanical keyboards or just want the freedom to try out new switches, the K87 allows you to do that with ease. And believe me, you want to try out new switches. There is a wide world of switches beyond the usual brown, red, and blue found on most premade keyboards, which means you can tailor your gaming experience to exactly your tastes. It’s also very useful if a switch should ever die: you don’t need to throw out your whole keyboard, just buy a switch pack (usually for less than $7) and only replace what you need. Likewise, if you ever want to give your keyboard a facelift, you can make it feel brand new again without investing in an entirely new board. 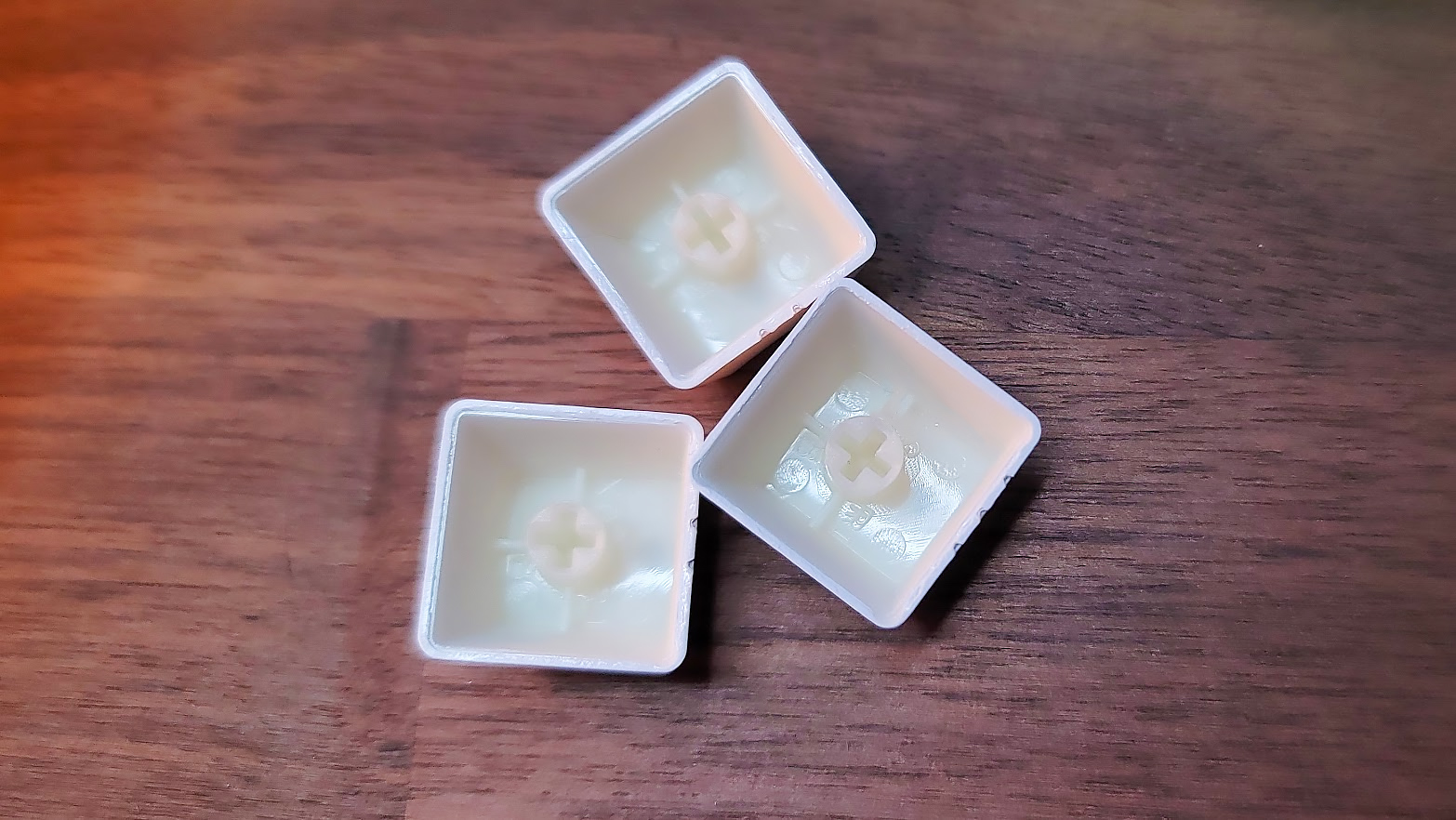 Along with this, we have new keycaps. These caps are officially double-shot, which means the legends are made of a second piece of plastic and won’t fade. That added layer also made them feel just slightly more solid under my fingers. The legends are now at the top to accommodate the north-facing switches and the font has been changed and has a slightly more gamer-y look that I’m not huge on. There are also no more side legends to indicate secondary functions like lighting control (which now live on the arrows and editing/nav cluster).

I was also very happy to find that the K87 now has software! If you can find it, you’ll be able to quickly customize your lighting, record macros, remap keys, or assign media controls. I say “if you can find it” because there’s no mention of it on the product page or manual. In fact, the only reason I found it is because the tech specs mentioned onboard memory. It’s odd that Womier wouldn’t be promoting this. Odder still, they don’t even seem to host the file. I had to Google the software, which took me to KPRepublic, a dead link, and eventually to a Reddit thread where someone linked to a Google Drive link. Sketchy, but I downloaded it, virus scanned it, and can say it seems to be safe. Don’t go through all that. Download it here. 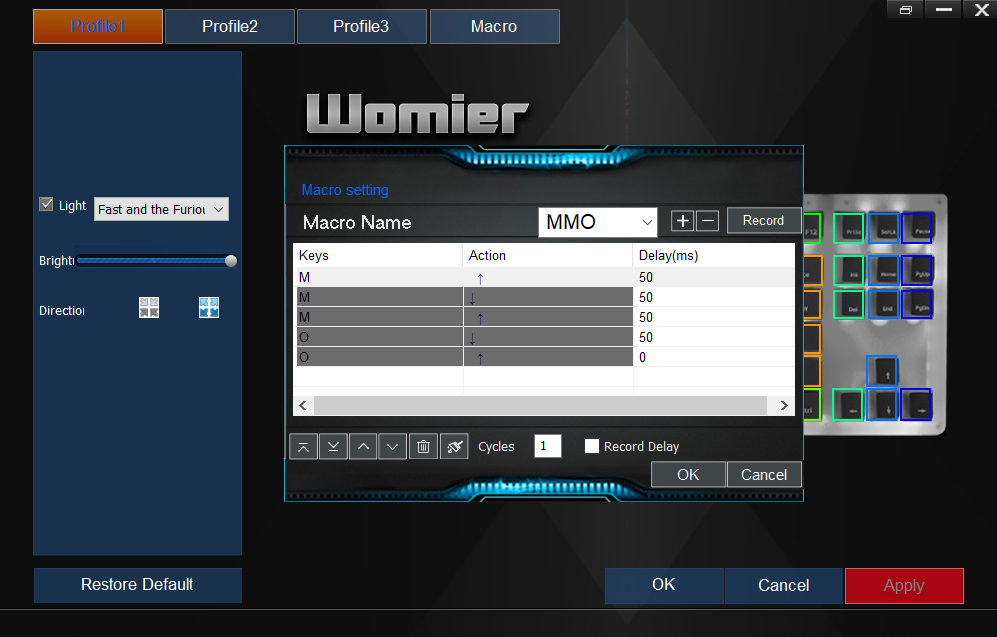 With that out of the way, what’s it like to actually use? It’s just as good as the first one, which is to say, far better than you would expect from a $79.99 keyboard from a brand you’ve probably never heard of. The acrylic case does an excellent job of deadening out typing sounds and lending the keyboard a very solid feel. The Gateron Reds I tested were as smooth as ever and gave the keyboard a light sound profile right out of the box. There was no spring ping that I could hear and key wobble was very low.

The stabilizers, though… they needed some TLC. I won’t sugar coat it: out of the box, they were terrible. They were rattly enough to drag down the whole typing experience. Since the switches can easily be removed, taking each stabilizer out to clip the feet and add a bit of dielectric grease was easy and worked wonders. I could have left it there, but I added a touch of lube to the inside of each and completely changed their sound. It took about 15 minutes to remove and lube them all and it was well worth it. 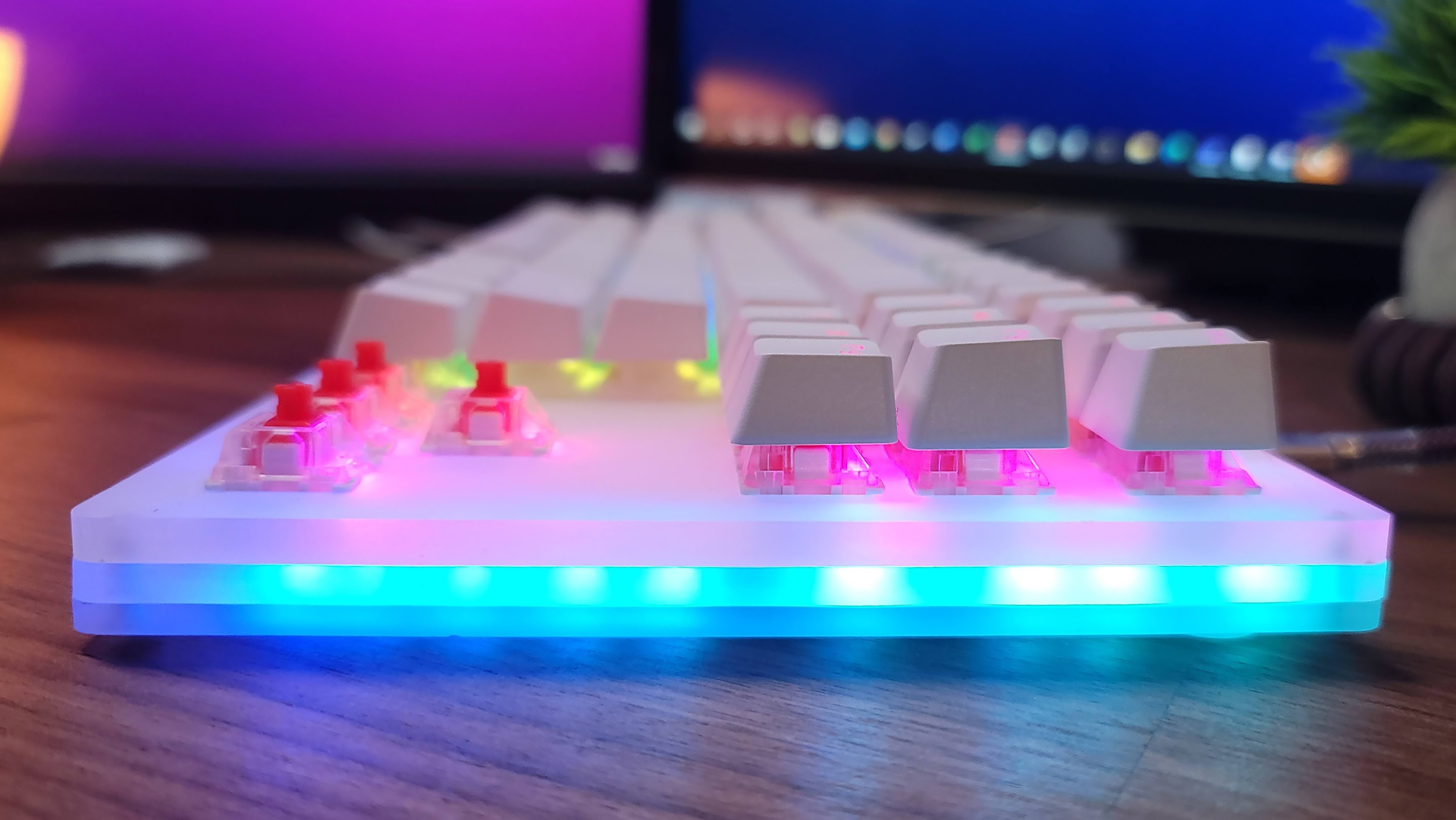 With the added programmability and N-Key Rollover, the K87 becomes a full-fledged gaming keyboard. It was just as responsive in Battlefield V as my Corsair K95 RGB Platinum or HyperX Alloy Elite. That said, the typing angle was much too flat for my taste, so I had to use a separate foot to find a more comfortable angle.

But, honestly, if you’re buying this keyboard, it’s going to be for the RGB and it just delivers. It is by far the brightest, showiest keyboard I’ve ever used. Indeed, there are other keyboards like it out there, like the new Drop Carina kit, but you won’t find one for this price or nearly as good for what Banggood is asking — and the K87 supports 5-pin switches while the Carina is stuck with 3-pin. It’s a showpiece keyboard and a conversation starter.

Behold: the RGB King on an RGB desk pad: 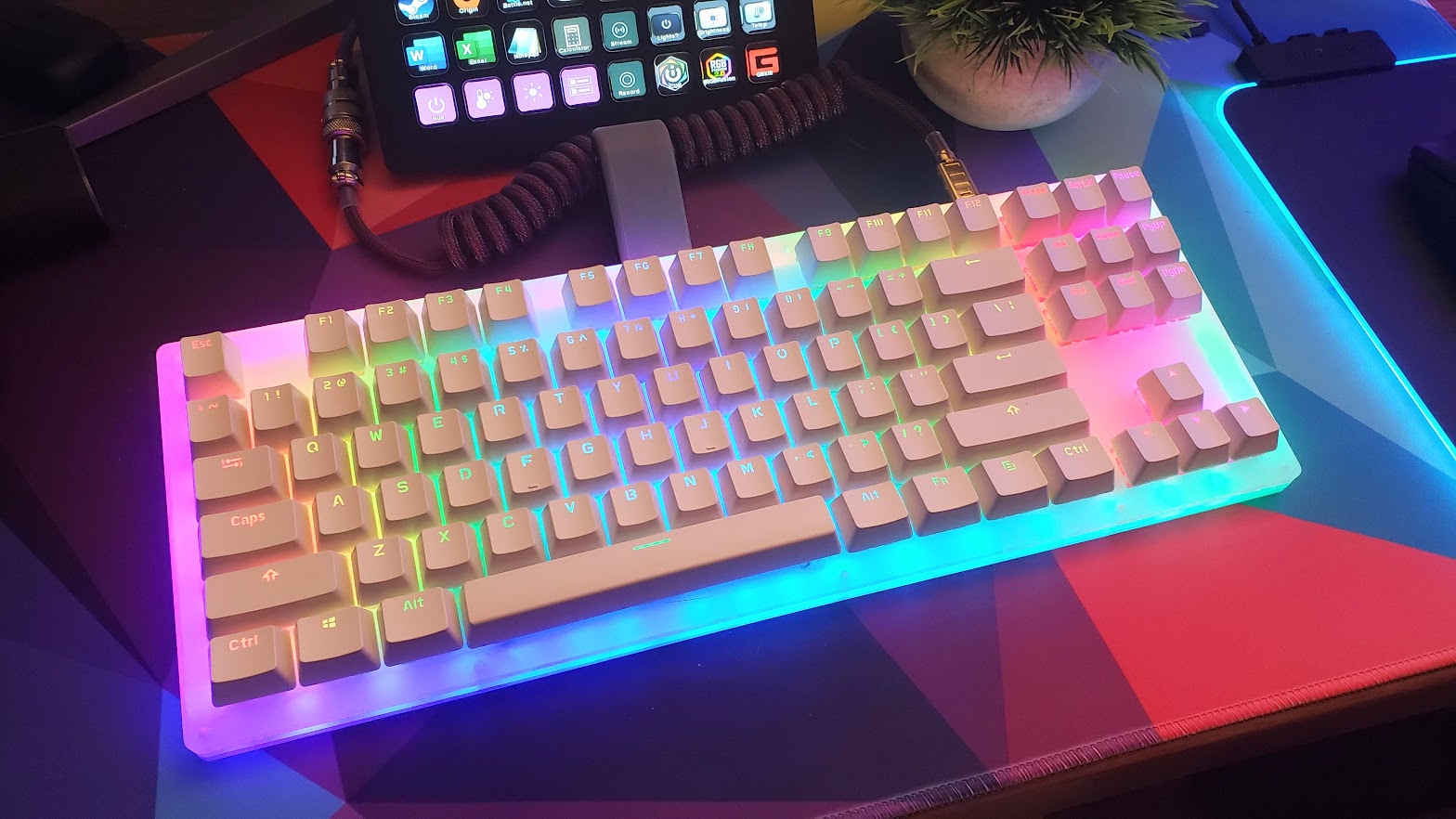 Like the K66, the Womier K87 isn’t going to be for everybody. A commenter made the remark that I wouldn’t actually buy a keyboard like this if it weren’t sent in for review. Well, actually, I would. I fall in that demographic that a) loves keyboards and b) loves RGB. If that describes you, the K87 is going to be quite the appealing keyboard. That said, it has its quirks. The stabilizers need attention, the software is functional but pretty basic, and no one should have to hunt download links from random Reddit threads. If you can get past those, however, you’ll find a unique keyboard that genuinely feels like it should cost more than it actually does. If you’re interested in finding out more, you can find it at Banggood here.

Disclaimer: The product described in this review was provided by the manufacturer for evaluation purposes. This article contains an affiliate link to monitor tracking. Purchasing through our link will generate a small commission and is a requirement for reviews from products provided by Banggood.