Are you in the market for a cutting edge external SSD? Western Digital may just have the answer you’ve been looking for. Today, we’re looking at the WD Black P50 Game Drive. It’s an external NVME SSD with a cutting edge interface that allows it to achieve incredible speeds up to 2,000 MB/s — but that performance comes at a price. Is the WD Black P50 right for you? Let’s take a closer look and find out. 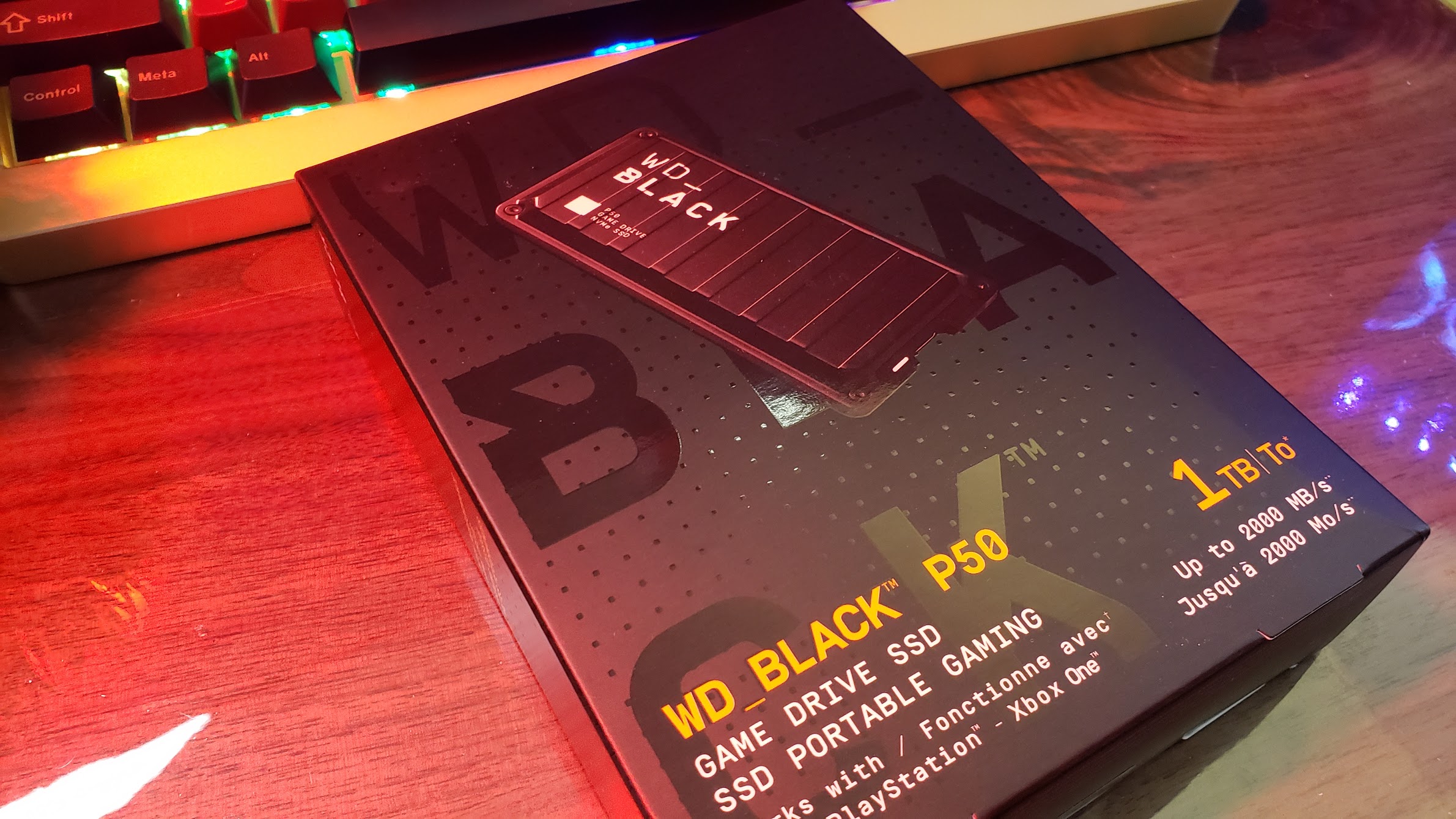 The WD Black P50 joins a growing list of external SSDs targeted at gamers. Not long ago, we looked at the Helix from Oyen Digital. Before that, it was the Crucial X8 and ADATA SE800, and even Samsung tried its hand at targeting gamers with the T5, its external SATA SSD. If it seems like there has been a surge over this past year, you’re right, and with next-gen consoles each offering internal NVME drives, this isn’t a trend that’s going to end soon.

Thankfully, that’s a very good thing. With maximum transfer speeds of up to 2,000 MB/s, these drives are capable of chopping your load times to shreds, even when compared against SATA-based SSDs. This is especially helpful if you don’t have a free M.2 slot or are looking to upgrade a PC whose motherboard may not offer one at all. 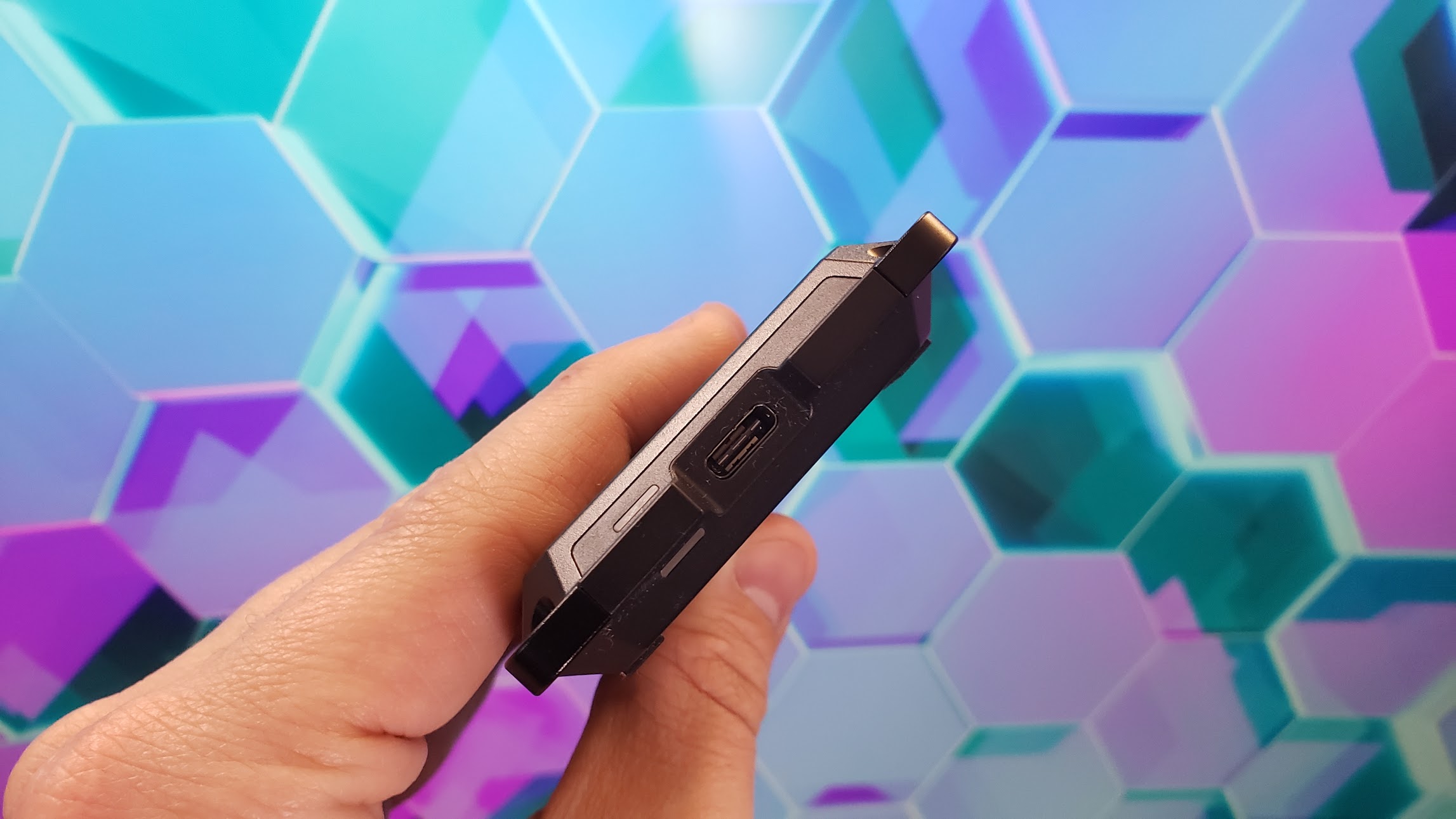 The WD Black P50 is also the fastest non-Thunderbolt external SSD we’ve been able to find — by far. Each of the drives mentioned above (excepting the T5) offered maximum transfer speeds of 1,000 MB/s.  By contrast, the P50 offers double the potential transfer speed. It achieves this by taking advantage of the latest SuperSpeed USB interface, also known as USB 3.2 Gen 2 2x2. This interface doubles the potential bandwidth of the connection, bringing maximum potential speeds up to 20 Gb/s or 2,000 MB/s.

That added potential puts the P50 into a class of its own, at least for the moment. It is also likely why the P50 is quite a bit more expensive than its Gen 1 counterparts. At $249 for the 1TB version, that’s a full $70-80 more expensive than its 1 Gb/s counterparts. For the 2TB version, you’ll be looking at a cool $499. If you don’t have the right connection — and if you’re not using a cutting edge computer, you probably won’t — you’ll be capped at 1,000 MB/s. Gigabyte appears to have an add-in card available for sale, but I’ve only been able to find it in Australia for another $89.99. It’s a fast drive no matter how you cut it, but for many of us, whether it’s worth paying extra for depends entirely on your future upgrade path.

For my part, I did not have the 2x2 connection to test with on either my Intel or AMD system. Even still, the drive provided impressive results. I’ll discuss more in the results discussion, but even without 2x2, it remains one of the fastest external NVME drives currently available. Part of this, I believe, is due to the fantastic heatsink WD has used. The P50 isn’t even close to the smallest external SSD I’ve tested (it’s close to a deck of cards, if a bit thinner), but it features an aluminum heatsink that prevents the drive from thermal throttling, even under consistent load. Here’s how it did.

To test the drive, I used our standard tools, ATTO and CrystalDiskMark, and completed a file transfer test using a Skyrim installation to give a peek at real world copy/paste performance with large files. I also completed two rounds of load time testing on PC and the Playstation 4 Pro to simulate two common use cases. The PC used USB 3.2 Gen 2, whereas the PS4 Pro (like the Xbox One X) was limited to USB 3.0.

I’ve included data for many internal drives as well. Since you’ll need to use the X8 with PC to make use of its faster transfer speeds, it made sense to include internal options for additional context when you’re considering which drive best fits your needs. 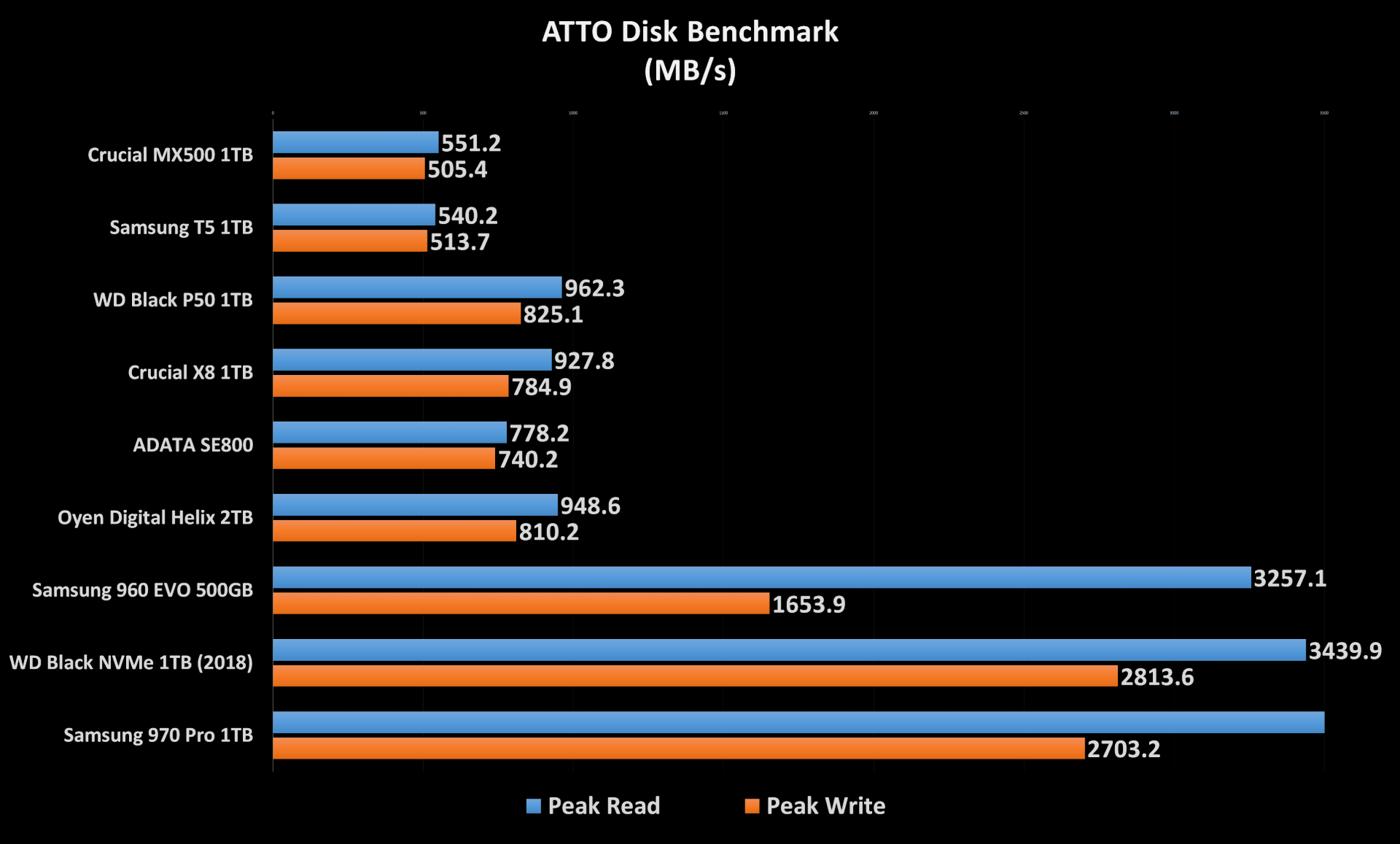 Note: Data for the Crucial X8 and ADATA SE800 should be considered anecdotal since it was not available for testing in the same system. It is provided here for additional context but you should be in mind that there may be slight differences based upon the testing system.

Beginning with ATTO, this synthetic benchmark is used to cross-check manufacturer’s claims about speed. It’s a synthetic test that provides a “best-case scenario” for possible transfer speeds using sequential data that the drive is able to anticipate. The P50 did a good job here considering it was handicapped by the USB 3.2 Gen 2 interface. In fact, it is our top performing external SSD so far, even compared against “native” 1000 MB/s drives. 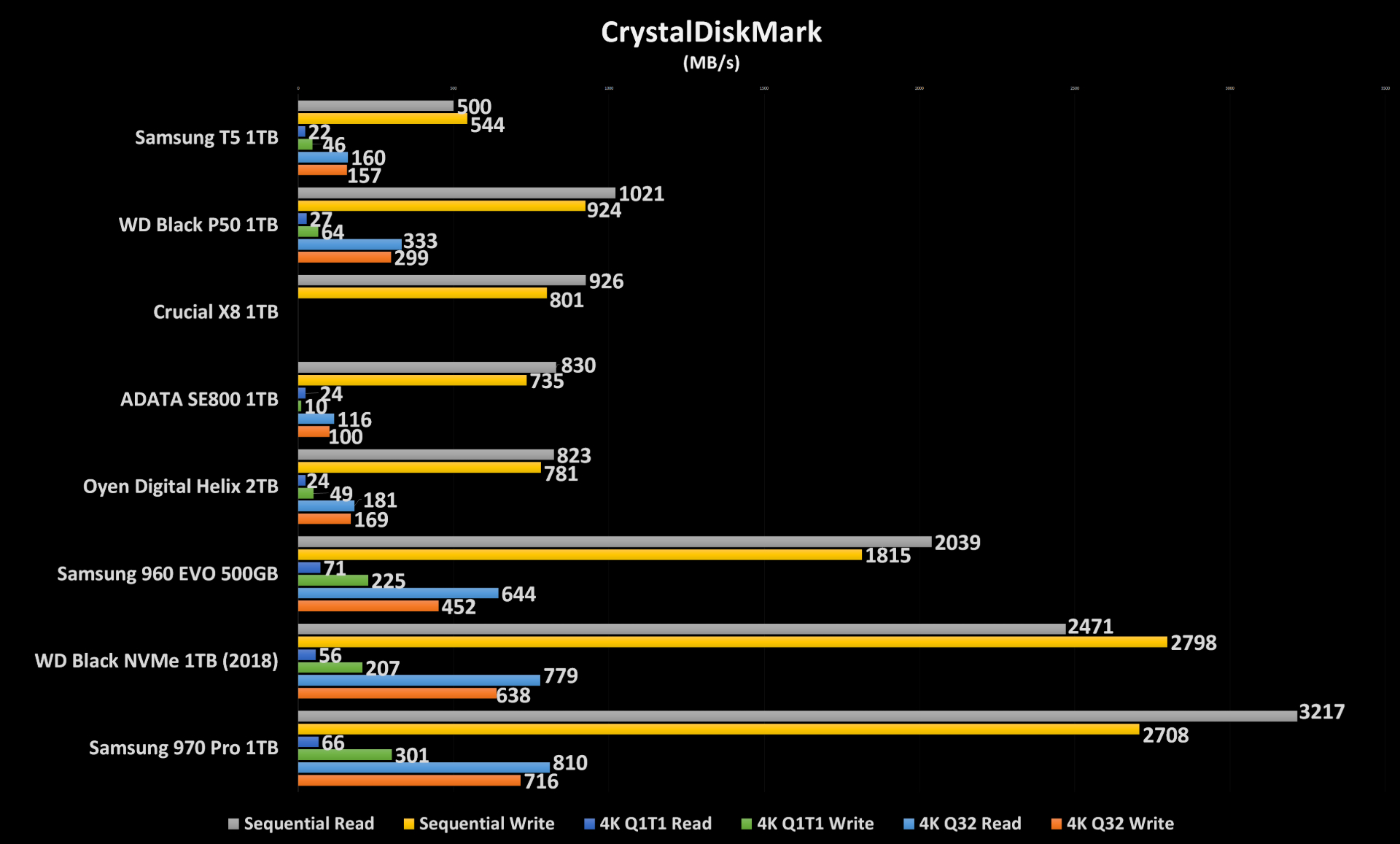 Note: Data for the Crucial X8 and ADATA SE800 should be considered anecdotal since it was not available for testing in the same system. It is provided here for additional context but you should be in mind that there may be slight differences based upon the testing system.

Next, we move on to CrystalDiskMark. This is still a synthetic assessment but comes closer to real world speeds thanks to its barrages of random data. It is very common to see speeds drop off some here. Again, the P50 takes the lead. With USB 3.2 Gen 2x2, it would assuredly spread that lead much further. 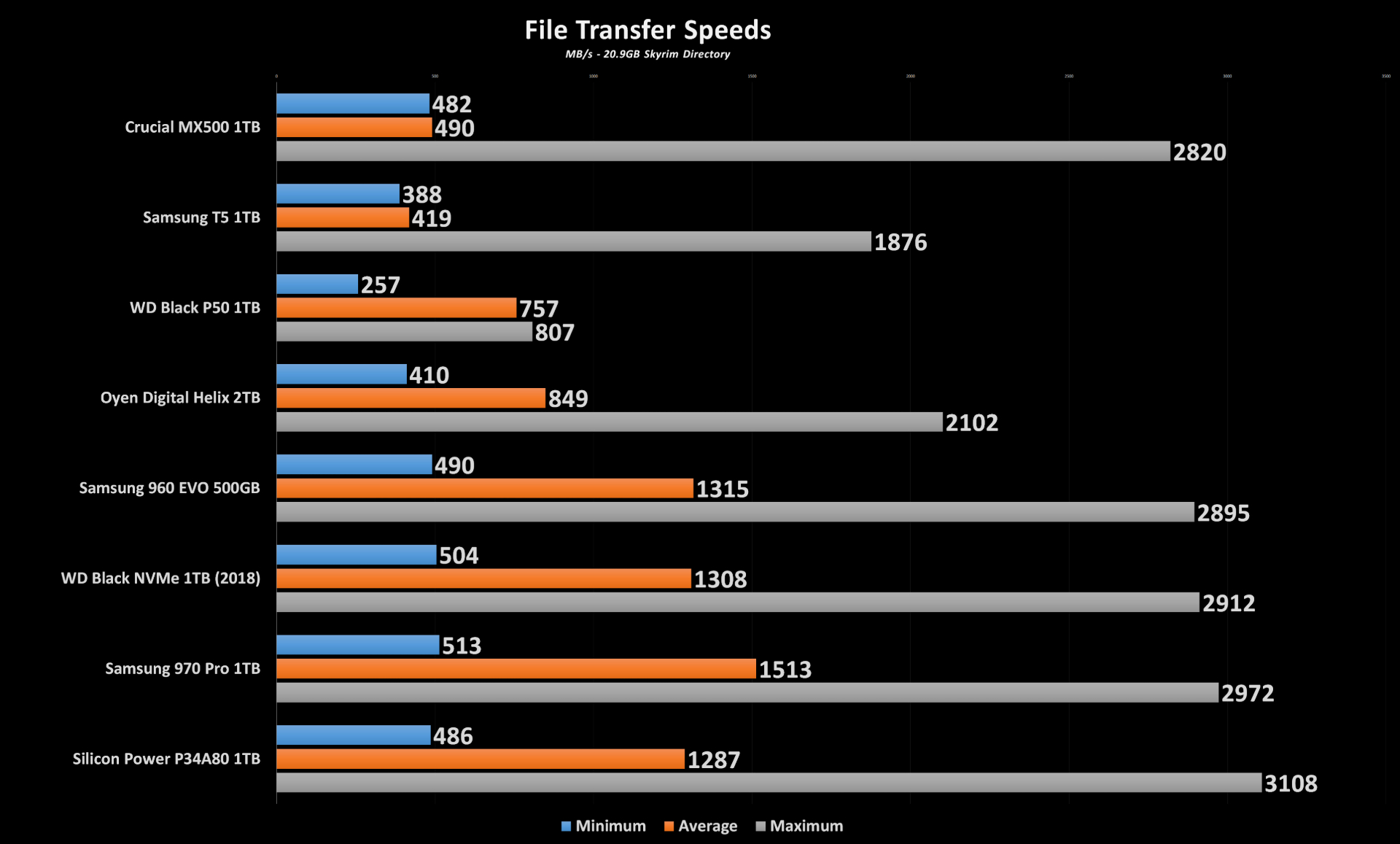 When it comes to real world file transfers under USB 3.2 Gen 2, the P50 fell short of the other NVME options I had available to test against. The most notable comparison here is against the Oyen Digital Helix, whose 1TB model retails for $169, that actually offered better real world transfer performance. Over 2x2 these results could, and likely would, be substantially different. What we can see here makes it clear that yes, it’s faster than a normal external SSD, but without the advanced interface, you’re not really seeing the results you’re paying for.

It’s also worth noting that these speeds varied quite widely depending on what I was transferring. Here you can see the comparative results with a Skyrim directory. Yet, transferring Overwatch was substantially worse, topping out at only 603 MB/s. Transferring a 1.4 GB video file peaked at 557 MB/s. Likewise, there was no initial speed burst like we commonly observe on solid state drives. In fact, in many transfers, the drive would ramp up over the first few seconds. These results are puzzling and not what I expected.

When it comes to game load speeds, we can observe a moderate speed improvement over our comparison drives. The results are expectedly minor on both PC and console. Looking at the PS4 Pro in particular, the bandwidth limitation of USB 3.0 makes it clear that this is not the drive to purchase just for use on console. That said, if you’re someone who travels or moves the drive between devices, there’s the potential that you could make use of its advanced speeds elsewhere.

The WD Black P50 is an aspirational drive. It’s pushing the envelope on potential speed, and it deserves credit for being first out of the gate. It may be a little bit too early, because many gamers will likely be paying for speeds they can’t take advantage of yet. The transfer speed test is also concerning in its inconsistency. When it’s performing at its peak, it’s one of the fastest external SSDs consumers can buy, but unless you’re planning on upgrading in the near future, it may be best to wait for a sale.