One of the monitor brands I’ve always been interested in trying myself has been Viotek. I’ve been fascinated by the brand as it offers many of the features of higher cost monitors: low response times, high refresh rates, variable refresh rate and more at much lower costs. As someone who is always looking for a bargain for cost to performance, and as we see so many gaming accessory companies leaning into the sweet spot of 1440p, 144Hz gameplay, could the Viotek GFV27DAB be worth consideration if you’re looking for the right monitor at an affordable price?

At first glance, the Viotek GFV27DAB doesn’t look all that impressive. The stand base looks like it won’t be all that stable, though that can be deceiving at first. Once assembled (which requires screwing the stand into the back of the monitor versus convenient tabs competition uses), the stand itself is incredibly stable and over the last two weeks I’ve not felt as though the monitor would crumble to the desk top as my work station rises up and down throughout the day.

Visually the screen is clear and bright, though its colors are somewhat muted compared to the BENQ BL Series or my Acer Predator IPS panels I’ve come from. While VA panels are going to have superior viewing angles compared to TN panels, as well as faster response times versus IPS panels, the latter of which traditionally offer a wider and more accurate color gamut. For someone doing content creation, color accuracy is going to be key, and I feel the color settings are something that I spent quite a while tweaking to get right. Even after that, however, looking at the same image on my 24” BenQ, which cost about $70 less, the image noticeably pops on the lower cost monitor, though the VA panel on the Viotek has deeper blacks. 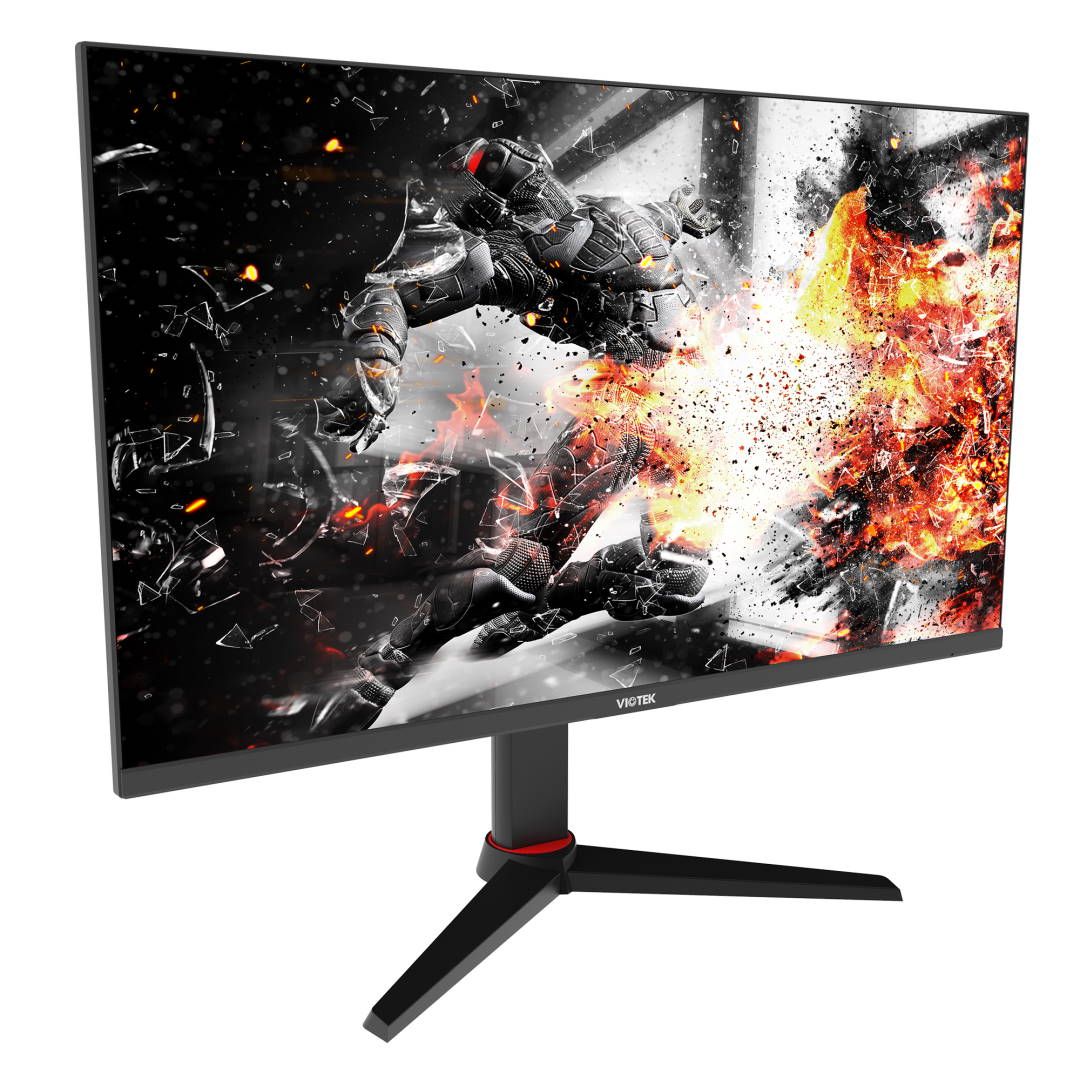 The monitor itself has an RGB light ring on the back, which is a nice touch though it’s not customizable. Though, if you’re in a dark enough room it is a cool flair to see the colors bouncing off the wall behind the monitor itself. It’s a feature that you can toggle on and off in the monitor’s OSD, and while it’s cool it does fee like it’s just crammed in there to “gamify” the Viotek panel.

The OSD is pretty easy to navigate as well, with a tiny dongle on the back you can press to bring up the full menu, or just push from one side to another to bring up quick adjustments, like moving the dongle upwards to select a different input or down to change the volume on the built in speakers. The OSD gives settings such as turning on FreeSync, HDR, the monitor’s Overdrive system. The OSD can also give you granular control over the monitor’s color settings, as well as enable the blue light filter to help ease the strain on your eyes.

It’s worth going through and setting the color settings to your liking, as well as sharpness, gamma or to take advantage of the good contrast provided by the VA panel.

But, at the end of the day, how does the Viotek GFV27DAB monitor perform? Well, rather well, actually. Once I got the picture settings where I wanted them and enabled VRR, I loaded up a few games that made me feel constrained a bit at 60FPS, which is what all my other monitors max out at.

Games like Spellbreak, PlayerUnknown’s Battlegrounds, League of Legends all benefited from the framerate increase. Camera movement felt silky smooth, and I didn’t feel like there was any ghosting, which is a common issue with VA panels over the cheaper TN counterparts. It was transformative, once again reaffirming my personal preference of framerate over resolution as what I want to prioritize in my gaming.

Even games that aren’t that graphically intense compared to modern AAA titles, like EVE Online or the recently released Kingdom Hearts 1.5 + 2.5 HD ReMIX on PC benefitted from the higher framerate. Running around Traverse Town with Donald and Goofy fighting the Heartless was always fun at 60fps, but it’s even more silky smooth at 144 FPS. 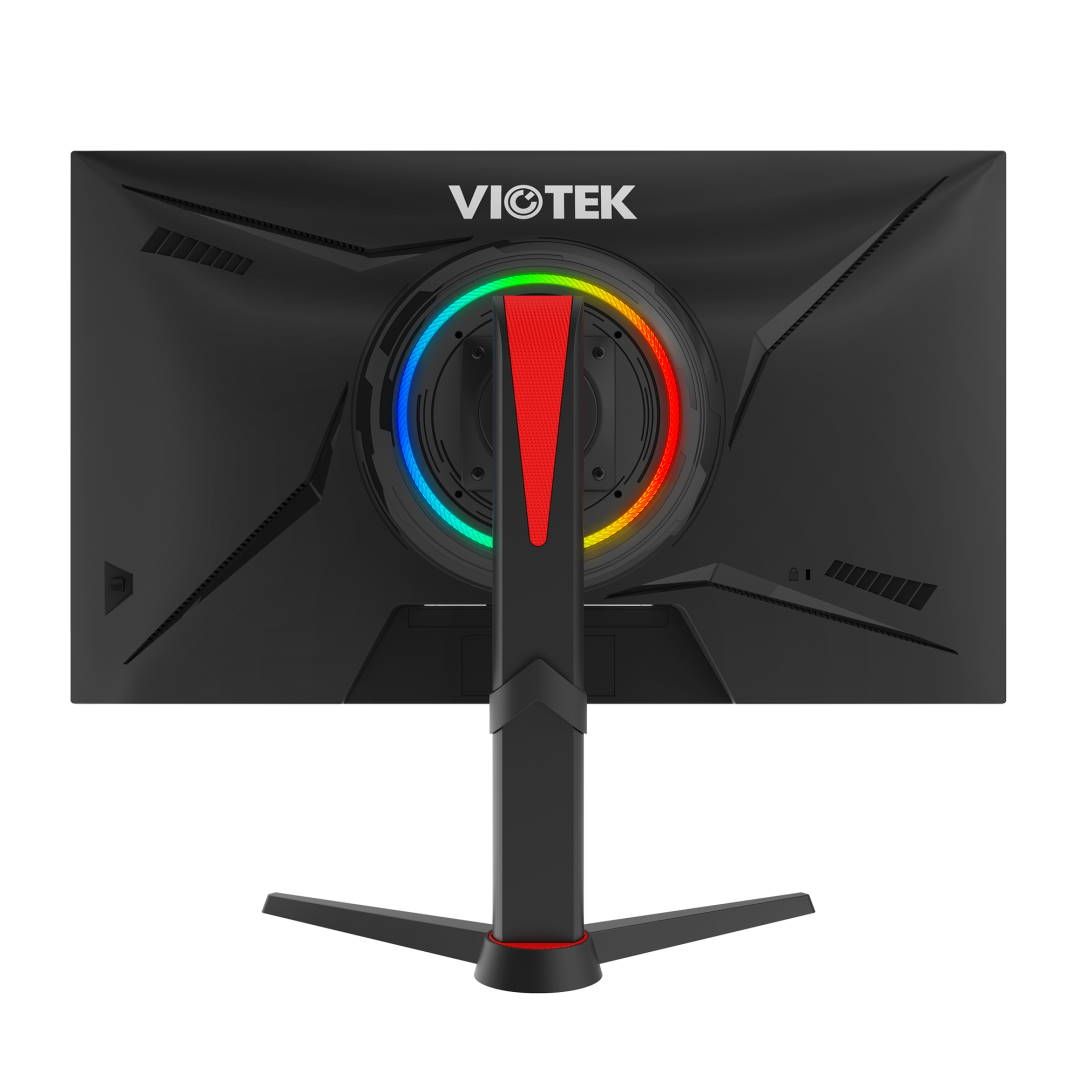 This isn’t the first time I’ve used a high refresh monitor, by the way. My Asus ROG Zephyrus laptop has a 240hz screen, but most games never get close to that on my laptops now aging RTX 2070. The 1440p, 144hz target really does feel like a sweet spot for gaming right now – especially as GPUs that could do high performance 4K gaming like the RTX 3080 or the AMD 6800 XT just don’t exist right now (though, even GPUs like the AMD Rx 6700 XT, which is built with this resolution and framerate target also are hard to come by).

It’s also an affordable display that takes advantage of variable refresh rate technology, namely using AMD’s FreeSync tech. The FreeSync range goes from 48Hz through 144Hz, with Viotek claiming it also makes use of AMD’s Low Framerate Compensation feature in FreeSync to make lower framerates feel smoother. Thankfully too, with Nvidia finally opening GSync up on their GPUs, this panel is GSync-Compatible, and I didn’t notice any real difference going from my Acer Predator 4K GSync monitor to this one, other than the higher refresh rate on the Viotek. I remember for the longest time GSync being something that priced me out of higher quality monitors, and with FreeSync now working with Nvidia cards, it just opens up so many more quality panels at a lower cost for consumers.

The Viotek GFV27DAB also has HDR, though it needs to be stressed that this is not an HDR-rated display. This is one setting I would highly recommend leaving turned off. HDR on this monitor is just not good, even through tweaking. The display just doesn’t get bright enough, and games like Assassin’s Creed Valhalla look over-saturated. If you’re looking for a good HDR display, unfortunately the GFV27DAB isn’t a good affordable option.

The monitor comes in two sizes – 27” and 29”. Personally, coming from a large 32” 4K display, this felt a little small and I would have likely enjoyed the 29” more, though that feeling lessened as I used this monitor more. I got used to the change in size, though programs like Premiere Pro felt a bit more constrained when working on video timelines. That said, I was feeling the same even on the 32” 4K screen, so a smaller monitor was obviously going to exacerbate that.

It is also able to adjust vertically, and while it has height adjustment, I found I was having to pick the monitor up, turn the screen vertically and put it back down as the corner of the screen would hit my desktop. The monitor, for me, just doesn’t get tall enough. Thankfully I can compensate for this some with a standing desk, but I still felt like I was looking downwards to see the screen in front of me to a degree, something that could be alleviated with just a slightly taller stand.

The Viotek GFV27DAB is a great monitor for the price. 1440p, 144hz, Variable Refresh Rate – it ticks many of the boxes consumers are looking for in their monitors right now without breaking the bank. While the color settings will require some tweaking to suit your own personal needs, the image quality of the monitor is outstanding – so long as you don’t have HDR enabled.

Many of the issues I have with VA panels, especially ghosting at high refresh rates, really didn’t crop up here with the GFV27DAB. Being able to experience high-framerate gameplay without those issues sold me on the quality of the Viotek panel overall. The OSD is easy to navigate and read as well, something I can’t say for every monitor brand in my house.

While personally I feel like the monitor could stand to be a little taller, the smaller stand doesn’t take nearly as much real estate up on my desk, which is nice in the end compared to my Acer Predator. The RGB ring in the back, while functionally useless, is a nice touch and homage to PC gaming’s need to shove RGB into everything.

All in all, this is a great 1440p, 144Hz monitor for the price, especially as the name brand varieties typically run upwards of $300. For those looking for what is being called the “sweet spot” in gaming performance, the Viotek should be on your radar when deciding on the monitor for your mid-range rig.