Victrix entered the game with its fantastic Pro AF ANC headset a couple years ago, and has since gone on to release fight sticks, controllers and console headsets. The latest headset from the company, its Gambit line, aims to provide superior audio quality with long-lasting comfort. How does it stack up?

Victrix, for me, has long been known for premium, well-built products. What attracted me to the Pro AF was its metal frame and incredibly comfortable design - despite being made from metal materials it was lightweight and fit my ears perfectly. I was thankfully happy to see that the Gambit Wireless headset continued at least the lightweight part.

The sleek design evokes an elegance that I feel Victrix is known for, even if I'm a bit disappointed the headset's plastics feel a bit cheap. The large, 50mm Neodymium drivers are shrouded in large, accented earcups that sport the Victrix logo, and I'm a sucker for the purple trim all over the headset. While blue is my personal favorite color, I should probably start considering whether Victrix purple is right there competing with it.

The headset is lightweight, the plastics smoothly moving to adjust the fit, though with as much flex as there is in the headband I wonder how long it will last till it starts to show some wear. I'm incredibly thankful for the earcups, however. I hate felt or cloth earcups - they always tend to make my head feel scratchy. Not only did Victrix opt for a leather earcup, they went a step further and are using sustainable vegan leather, which I appreciate immensely.

The earcups themselves are incredibly comfortable around my ears and, unlike headsets like the Astros or even my Corsair HS80 RGB headset recently, which over time can make my ears feel hot. The weight of each can feels equally dispersed around my head, meaning there aren't any points where I feel the headset is stressing me unevenly. Despite not having the ear-cup vents of its Pro AF brother, in extended use, my ears never felt too hot or sweaty. Then again, it is winter, so that could change when the Vegas summer heats start oppressively slamming into my house again 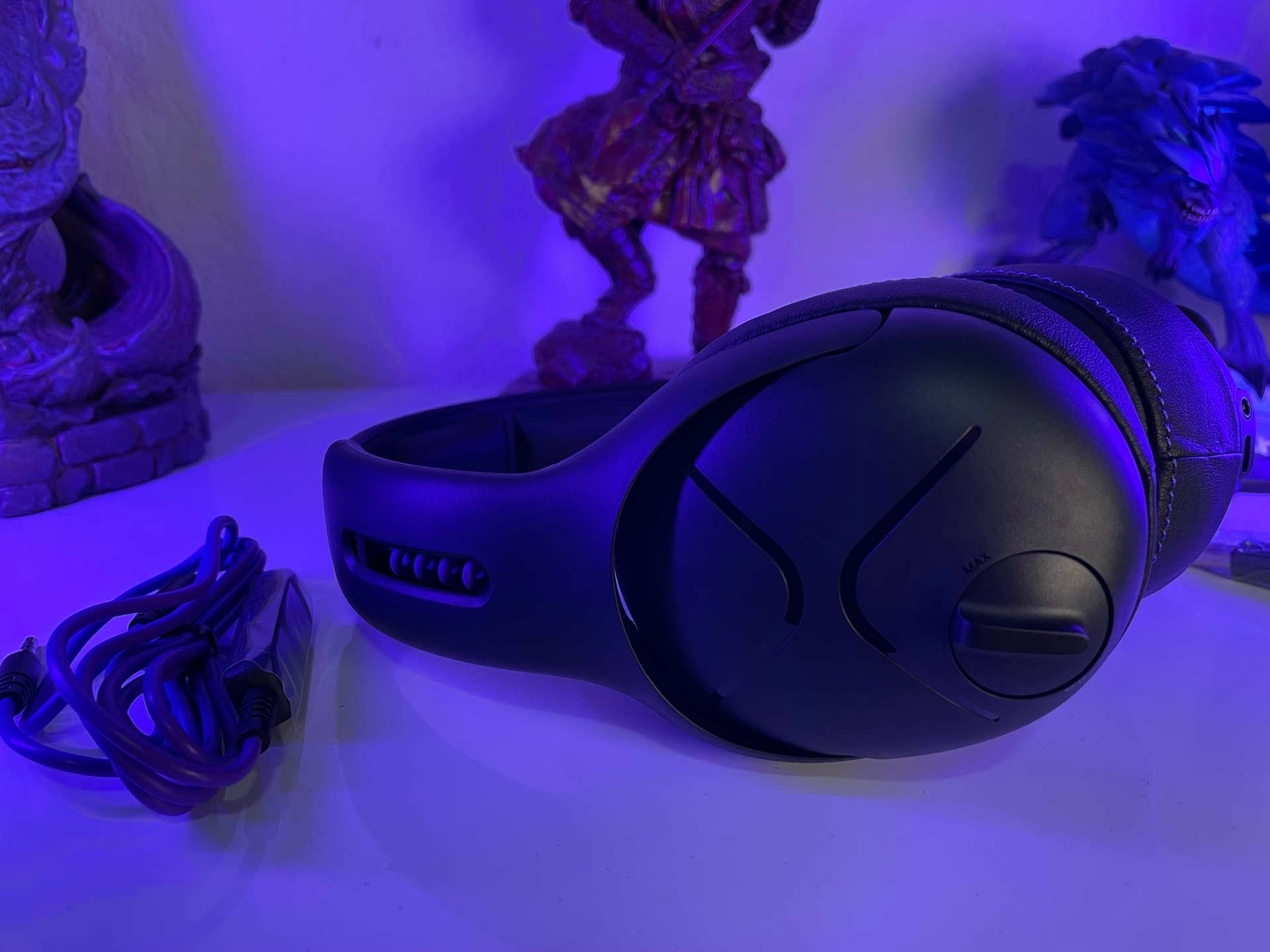 Built into the headset is the same style of microphone Victrix used with the Pro AF: a tournament-grade mic that was originally designed to be used on the US military's Cobra attack helicopters. The idea here is to use a microphone that is designed to cut out as much noise as possible in order to ensure that only the speaker's voice comes through. The headset itself has on-ear controls to adjust the microphone as well, though if you're using it in wired mode there is an in-line controller as well.

The headset is wireless, unlike the Pro AF, which is incredibly convenient for console players (there is both a PlayStaion and Xbox variant of the Gambit Wireless headset), though they needn't simply be used as a wireless headset. The Gambit comes with a 3.5mm audio cable to effectively set the device into "tournament mode," allowing you to plug it into a source, such as an Xbox controller, for easier use. If you do decide to go wireless, the included dongle is pretty much plug-and-play. Unlike other companies, the Gambit headset doesn't come with any software to tweak your experience - it simply works out of the box as-is.

That is rather convenient, too, as the only real thing I needed to do when setting it up on my PC was enable Dolby Atmos, which the Victrix Gambit comes packaged with a lifetime subscription. This works on PC and Xbox, and it completely transforms the experience. It's a nice addition, though it's far from the only headset on the market to support Dolby Atmos virtual surround sound.

Audio has gotten so good over the years, with game developers pushing the boundaries further with each release. Hardware companies have gotten just as good providing the kit needed to drive those experiences to the player. The Victrix Gambit is no exception to the rule.

The 50mm neodymium drivers don't fail in sending booming audio when needed, though also allow for restraint when the audio calls for it. When listening to music on my PC while working, the Gambit provides clear audio, though the bass might leave some songs sounding muddled. This could be down to the Dolby Atmos implementation, though it was rather consistent, whether I was listening to Mozart's "Requiem in D Minor", Coheed and Cambria's In "Keeping Secrets of Silent Earth: 3" or jamming out to a game soundtrack like the 10th Anniversary of The Lord of the Rings Online.

That said, while in-game the audio itself pops and performs as advertised. The directional surround sound provided by the Dolby Atmos made it quite easy to pinpoint enemies nearby me in games like Halo Infinite's multiplayer, while the ambiance in games like Pillars of Eternity and Baldur's Gate 2 were crystal clear, setting the tone for those games effortlessly.

The sound clarity brought on by the headset made immersing myself in each title eaiser, especially as someone who really needs audio to help set the stage for everything in a game. The sound of Master Chief's pistol popped and cracked like I would expect to hear in real life each time I fired the weapon (hopelessly, I'm still not sure I've ever hit anyone with it). Audio cues in Final Fantasy XIV: Shadowbringers and The Lord of the Rings Online: Fate of Gundabad didn't seem lost as they can in some of my other headsets, allowing me to quickly react with a new skill rotation (or sic my pet familiar with my Loremaster onto an unsuspecting Orc in LotRO).

This should come as no shock, either, as from the very start Victrix has had a knack for driving stellar audioscapes in their headsets. For those who are looking to play competitively, whether it be in the loud arenas of League of Legends or the rousing crowd at an FGC event, you might want to find something a bit better noise canceling, but the Gambit isn't a bad choice if budget is an issue.

That said, while the Cobra microphone does allow for the Victrix to cut through noise like it was designed to do, it does come at the expense of quality. It's just not going to replace a quality USB Condenser microphone or even comparably priced XLR mic like the Rode PodMic.

At the end of the day, the Victrix Gambit Wireless headset fits the brief: it provides a stellar audio experience while remaining comfortable throughout the day. This is a headset that could be used just sitting in bed playing a laptop or console for hours, or in a tournament when you need something to drive clear audio cues at any moment.

When I reviewed the Gambit Xbox controller by Victrix, I was a little let down by the build quality, thinking that Victrix has gotten away from its premium roots, and to a degree, I feel the Gambit headset continues this trend. This is down mainly to the all-plastic build of the headset frame. I seriously question how well this will hold up over continued use, especially with players who have wider heads and can put stress on the headband a bit more than someone with a smaller dome (for reference, I fall in the former camp). Each time I take off the headset I can hear the plastic creaking, reminding me of my LucidSound LS40s, which did finally crack in the frame after about two or three years of continued use.

For $129, many gamers are going to use the Victrix Gambit headset as their main device. While the cost is lower down to the materials being used for sure, it's still a shame that the product, while performing admirably, feels low-cost. Others might be a bit disappointed due to the lack of RGB, though I think Victrix's design aesthetic lets them get away with not including this, as the sharp purple is really the only pop of color these need. 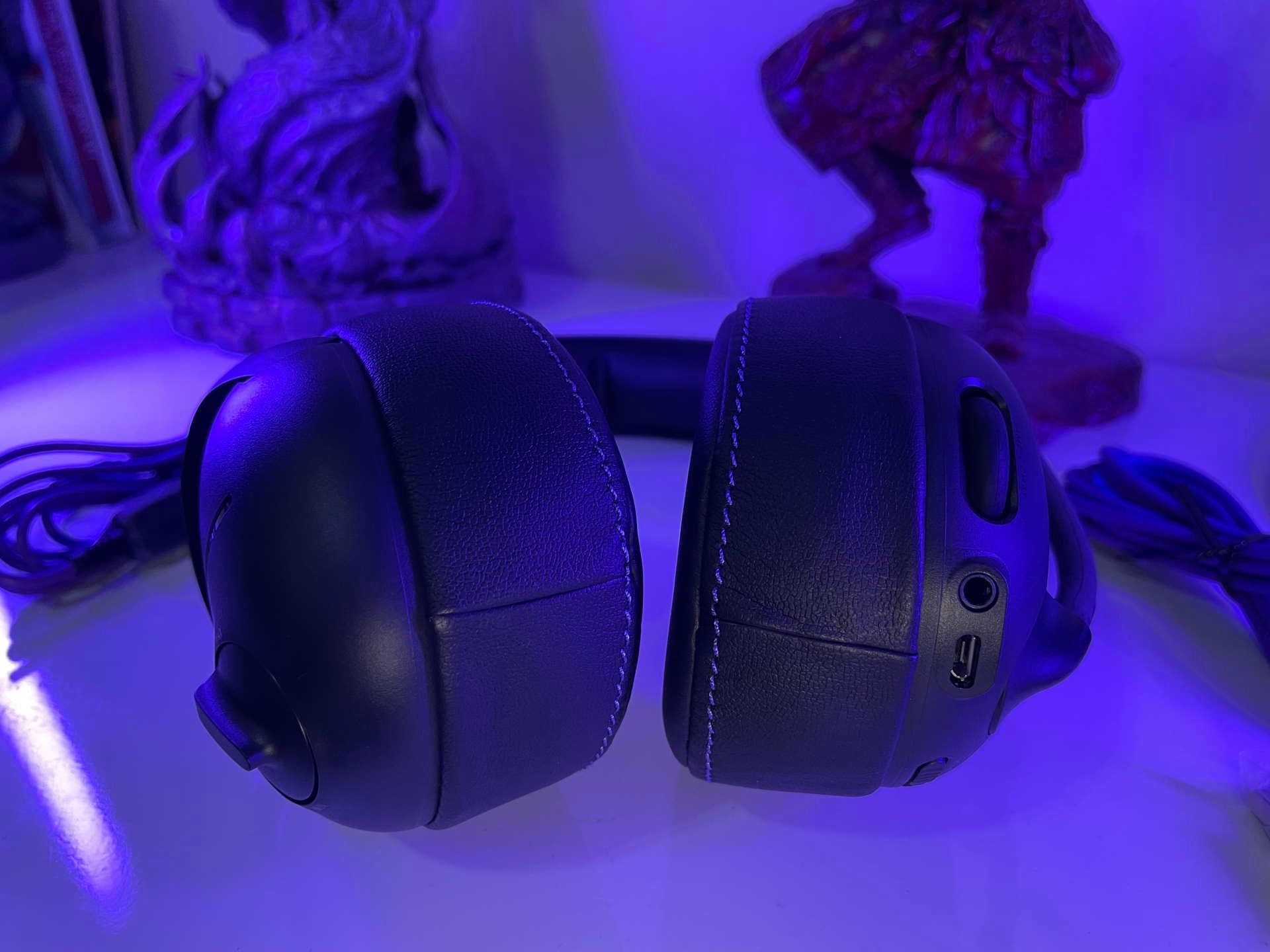 That said, if you're someone who is looking for a great audio experience, the Victrix Gambit headset definitely delivers that with ease. The addition of a lifetime subscription to Dolby Atmos is an incredibly nice touch too, driving even higher quality audio to the headset in pretty much every application. While I do think that the bass might be a bit too high for my liking (and with no software to tweak the EQ, you're pretty much stuck with it unless you have your own solution), I also don't typically turn the bass up in any application, much to the chagrin of my friends.

When it counts, the performance is right up there with my normal go-to headset, the Victrix Pro AF, as well as the few headsets I've reviewed this past year. Being able to hear clearly what is going on around me in the maelstrom that is a Big Team Battle in Halo Infinite, or to easily pick out the direction of the crack of a pickaxe on stone in New World, alerting me to a possible PvP-flagged enemy player never disappointed. Being able to wear the headset all day thanks to its lightweight design and incredibly comfortable ear cups is a treat as well, meaning I could use these all day at work, or during long raid sessions.

All told, the Victrix Gambit Headset is a good headset with some great features. My hope is the next iteration is built with more premium materials, leaning into the high-end aura the purple-laden Victrix has been known for since its inception. But if performance is your only metric, the Gambit certainly does that at a high clip, making it a worthy last-minute addition to any holiday gift list.

The product described in this article was provided by the manufacturer for evaluation purposes.
8.0Great
Pros
Cons
Tags
victrix gambit tournament wireless headset