Since the brand was announced a few years back, Victrix has become known for the premium quality of some of their products. From the exceptional ProAF Headset to the Victrix Pro FightStick, the company has made a name for itself in high-performance gaming. So, when Victrix announced their Gambit line of products, I was interested to see what the next level of peripherals from the company would look like.

Enter the Victrix Xbox Gambit Dual Core Tournament Controller. This $99 controller aims to be a “pro” grade option for players who want something other than the SCUF or even the Xbox-made Elite gamepads, albeit with a more affordable price tag.

Boasting the title of the “world’s fastest licensed Xbox controller,” the Gambit aims to give users incredible customization over the look and feel of the pad itself, as well as tailoring the performance to suit your specific needs. But how does it hold up, and is it worth the $99 price tag?

At a glance, the Victrix Gambit Dual Core Tournament Xbox Controller is an attractive piece of kit. It’s not gaudy like some gaming accessories can be, but it’s not muted or elegant like the company’s more expensive offerings either. It’s a good middle ground, with just enough character to make it interesting, but pared back from the flashy lights and edges that define the “gamer aesthetic.”

It helps that the controller comes with two swappable faceplates: one, white, with textured grips and a smooth purple plate that evokes more of the aesthetic of Victrix’s other offerings. Personally, I prefer the purple – I’ve always adored the purple trim that Victrix uses on their ProAF headset and branding, as it’s one of the more unique things about how the brand presents itself. 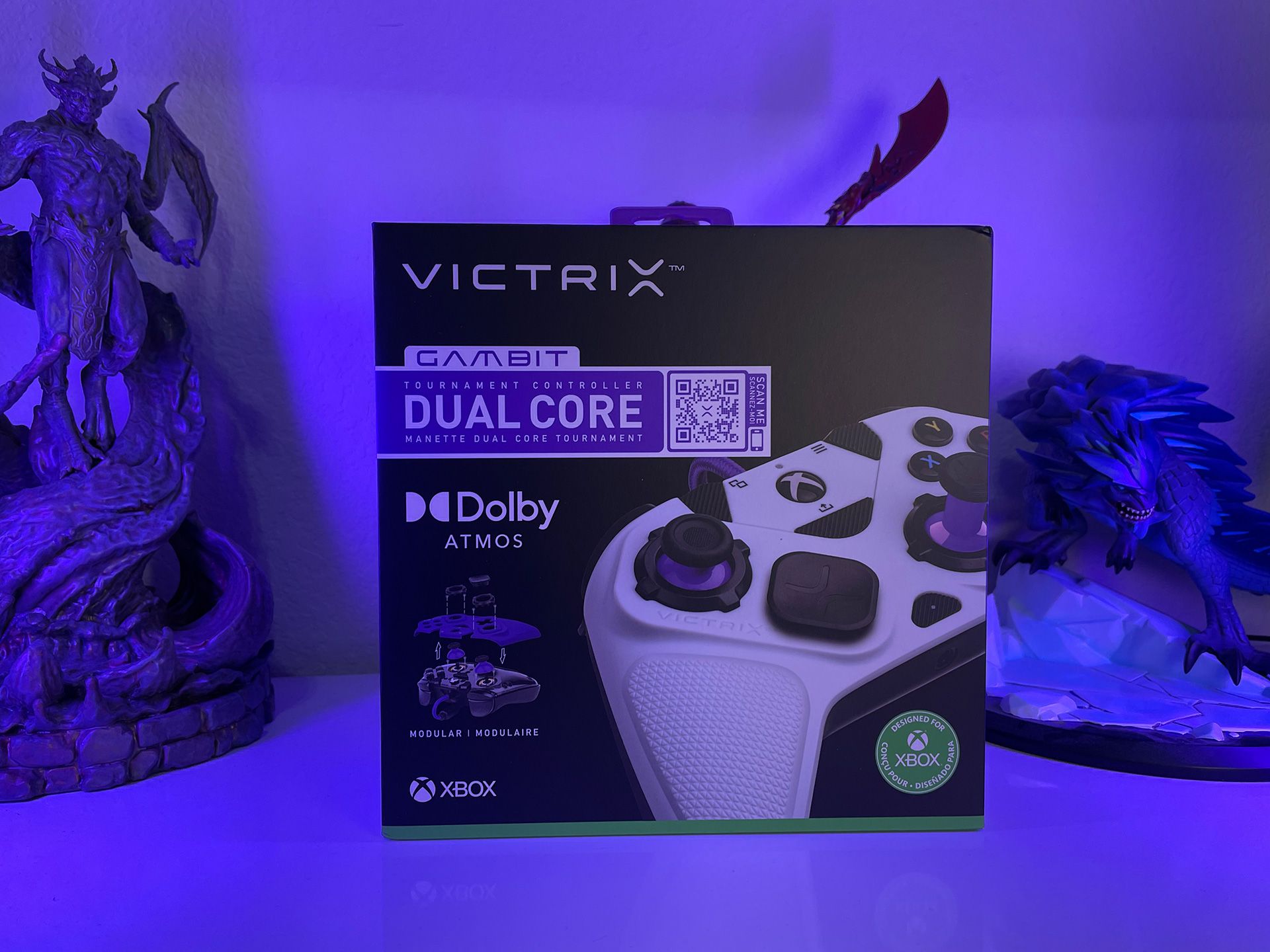 Nearly every aspect of this controller is customizable as well, from being able to swap the thumbsticks and D-Pad, down to the gates around the sticks themselves. The Gambit controller also features rear buttons with two paddles to choose from depending on your preferred feel. To store everything, the controller comes with a padded case reminiscent of those seen with the Xbox Elite 2 Controller.

One major drawback is that it is wired only. It’s a shame too, as less expensive controllers on the market can be both, and while in a tournament setting you might want a wired connection to be safe, at home or sitting at a PC it’s not necessary. I would just prefer the option.

It’s also disappointing that the entire body of the controller is built from rather cheap feeling plastic. With the metal accents of the Victrix ProAF headset and the premium-feeling metal chassis of the FightStick, I was hoping to see something similar here but no such luck. Spending $99 on a premium controller might be too much to ask if the build quality doesn’t feel premium, and it’s here where the Victrix most suffers in my opinion.

It doesn’t help that the actual buttons feel cheap as well. It feels like they’re made from the same molded plastic. The thumbsticks move effortlessly but compared to the metal sticks on the Elite Controller, I wonder just how long the plastics will hold up. The triggers and shoulder buttons are comfortable enough, though I don’t like the positioning of the paddles. Personally, I’m not much of a paddle-fan in general, but do understand why many people would want to use them, especially in racing and shooting games. 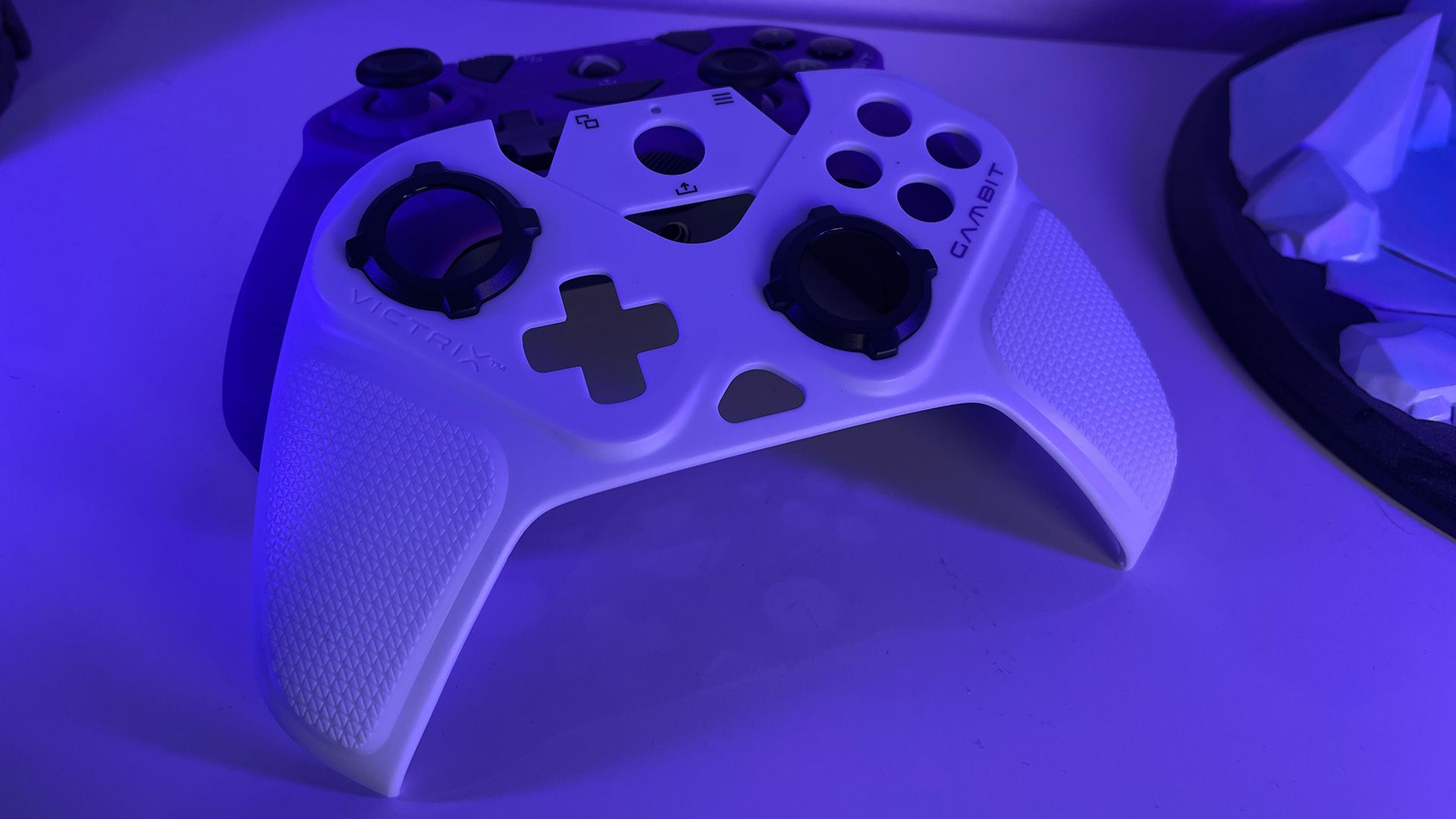 The triggers can be adjusted, as well, and turned into hair triggers. Pulling this off requires adjusting two sliders on the back of the controller. Instead of it being just a toggle, you’ll need to pull the two tabs, push down on the triggers themselves and then let go of the tabs. To reset the hair triggers, you simply pull the tabs. It’s a bit convoluted, but not hard to overcome. However, I did find myself wanting to switch in matches of Halo Infinite’s multiplayer, and not having a simple toggle made that more of a hassle than it should be.

The nice thing about this system is that it allows you to set your triggers into one of five different stops along the way, allowing you to really dial in your sweet spot. Other controllers only have one or two positions, so this level of customization was a nice change once I figured it out.

The Gambit also supports gaming headsets using a 3.5mm jack. Headset audio can be adjusted and customized on the controller using the D-Pad. It comes with Dolby Atmos surround sound support, allowing you to fully hear the soundscape of whatever game you’re engrossed in all around you, which is indeed an superb – and surprising – touch, though hardly exclusive to this product. Since Dolby Atmos is software-based, it can be used with all 3.5mm headsets and enabled with or without the Gambit controller.

But, how does it perform? If you’re coming from a standard controller, there is a lot more customization on offer that might overwhelm you. However, once you find the exact combination of gates, thumbsticks and more, you don’t really need to concern yourself with the extra options. But you can, and that’s a big selling point.

For example, I preferred the diamond D-Pad when playing games like Soul Calibur VI, as I felt I had more control over my sweeps than with the standard pad. The varied thumbsticks were also nice. The raised height Sniper stick became my go to in shooting games such as Halo Infinite as well as Warframe, as it felt much more precise than the standard stick. I just wish there were at least two domed sticks in the case so I could use one for both of my sticks. 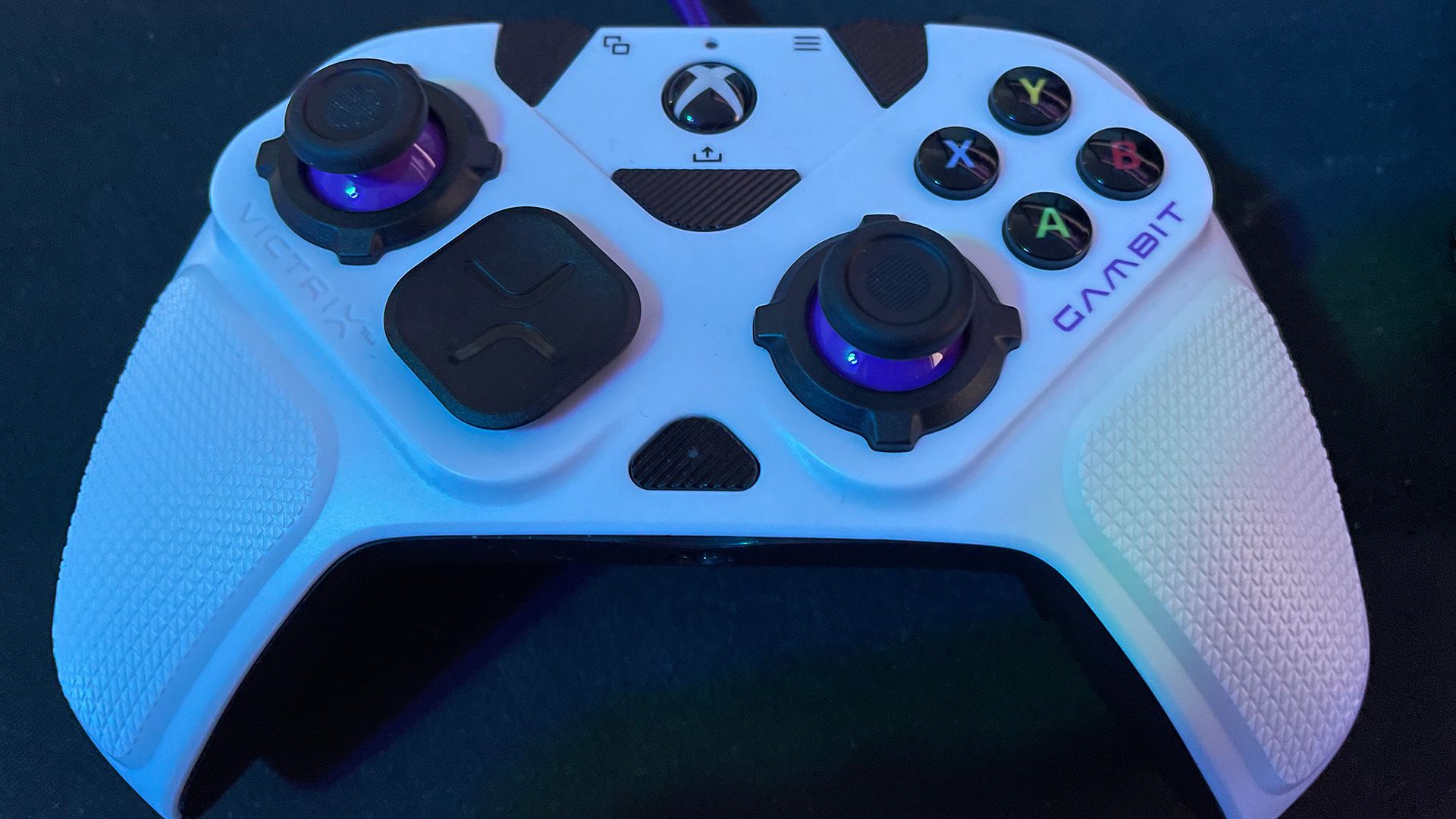 However, throughout all my testing I could not shake how cheap the build quality feels on the controller. When snapping the thumbsticks into place, it sometimes felt like I might crack one of the plastic bases. Everything has such a plasticky feel across the controller itself it’s a bit disappointing to see from a brand that normally screams high build quality.

That said, one of the defining features of the Gambit Dual Core Tournament controllers is the performance and precision of the device itself. And in that it held up admirably. Response felt instantaneous when pulling off shots in Warframe or when I needed to rush in and get that final melee on an enemy in Halo. One might even say the controls, especially the back paddle, are a bit too precise, as even the lightest touch during a hectic moment could cause the controller to read an input and fire off a round, or jump when I didn’t mean to. For high level players who are aiming to be pro, this type of hair-trigger responsiveness is likely what you’re looking for. As a journeyman myself, it might be a little too sensitive.

If you thought customizing the controller via swappable buttons and faceplates wasn’t enough, thankfully Victrix has you covered with its Victrix Control Hub app. This app is available on Windows 10 and Xbox consoles, allowing you to further hone the controller to your liking. 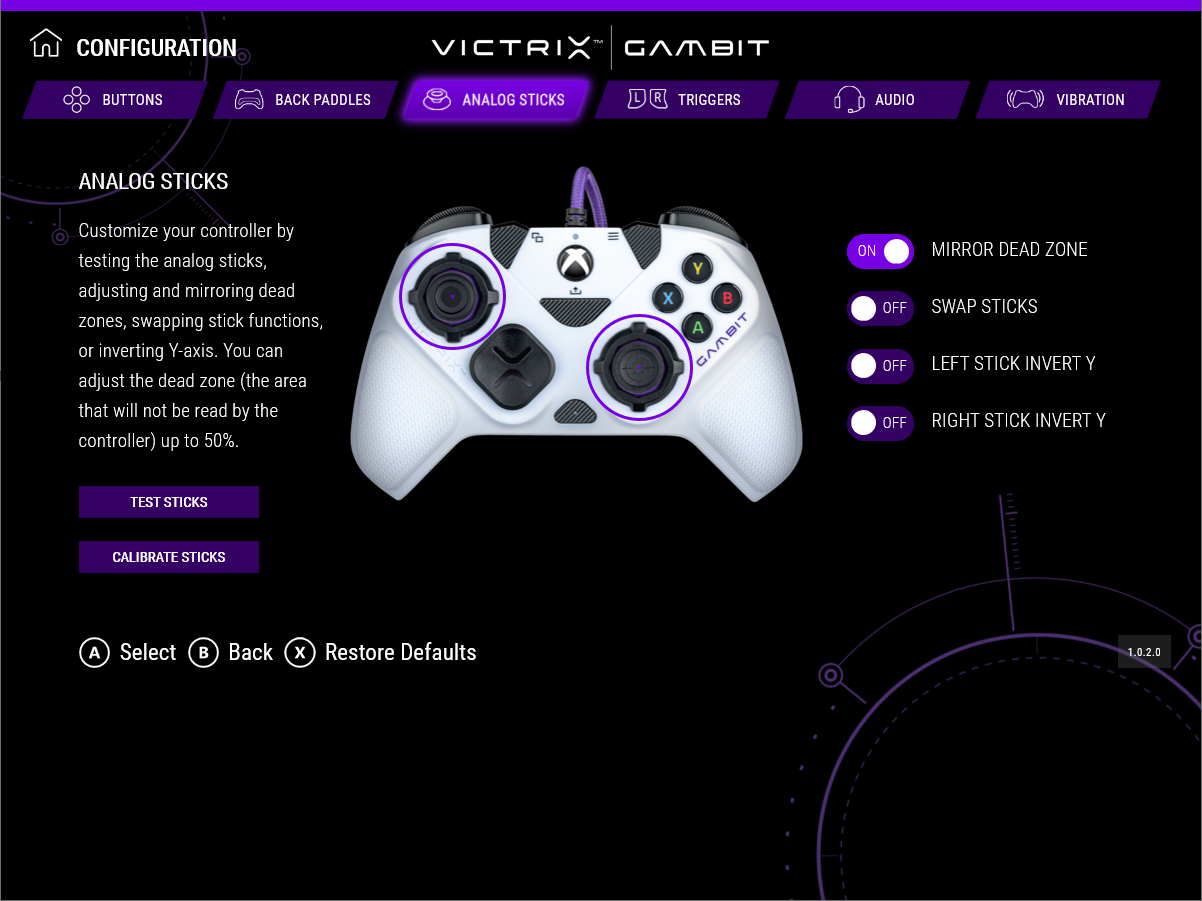 Want to remap the buttons entirely on the controller itself? You can do that. Feel like dialing in the deadzone on your thumbsticks or triggers? Check. Need to recalibrate the sticks themselves? You can do that. It’s all available in the app. It’s here where you’ll be able to download new firmware updates for the controller itself as Victrix tunes its performance, especially the Dual Core input processing even further.

The Victrix Gambit Dual Core Tournament Controller is a decent piece of kit. It performs under pressure in a way that will satisfy any player looking to up their game with a more “Pro” level device, though I do wonder how well it will hold up over the long haul.

It’s a shame too, as Victrix’s brand initially felt built upon an adherence to building premium, high-quality products in both the performance but also how they were structurally built. While this isn’t as expensive as their other offerings (which likely explains the difference in build quality) it makes me wonder if that desire to lead the charge as a premium brand is giving way to offering an upscaled PDP experience.

At $99, it’s not cheap, especially in this pandemic-fueled world of inflation. While it’s not as expensive as the SCUF or even the Xbox Elite 2 Controller, those feel more premium for the little extra money (and the Xbox Elite 2 is constantly on sale, meaning some buyers might just wait till one can be had for around the same price). Additionally, the fact that the controller is only wired is a huge drawback for me, especially as many players sit far enough away from their consoles to warrant a wireless connection. 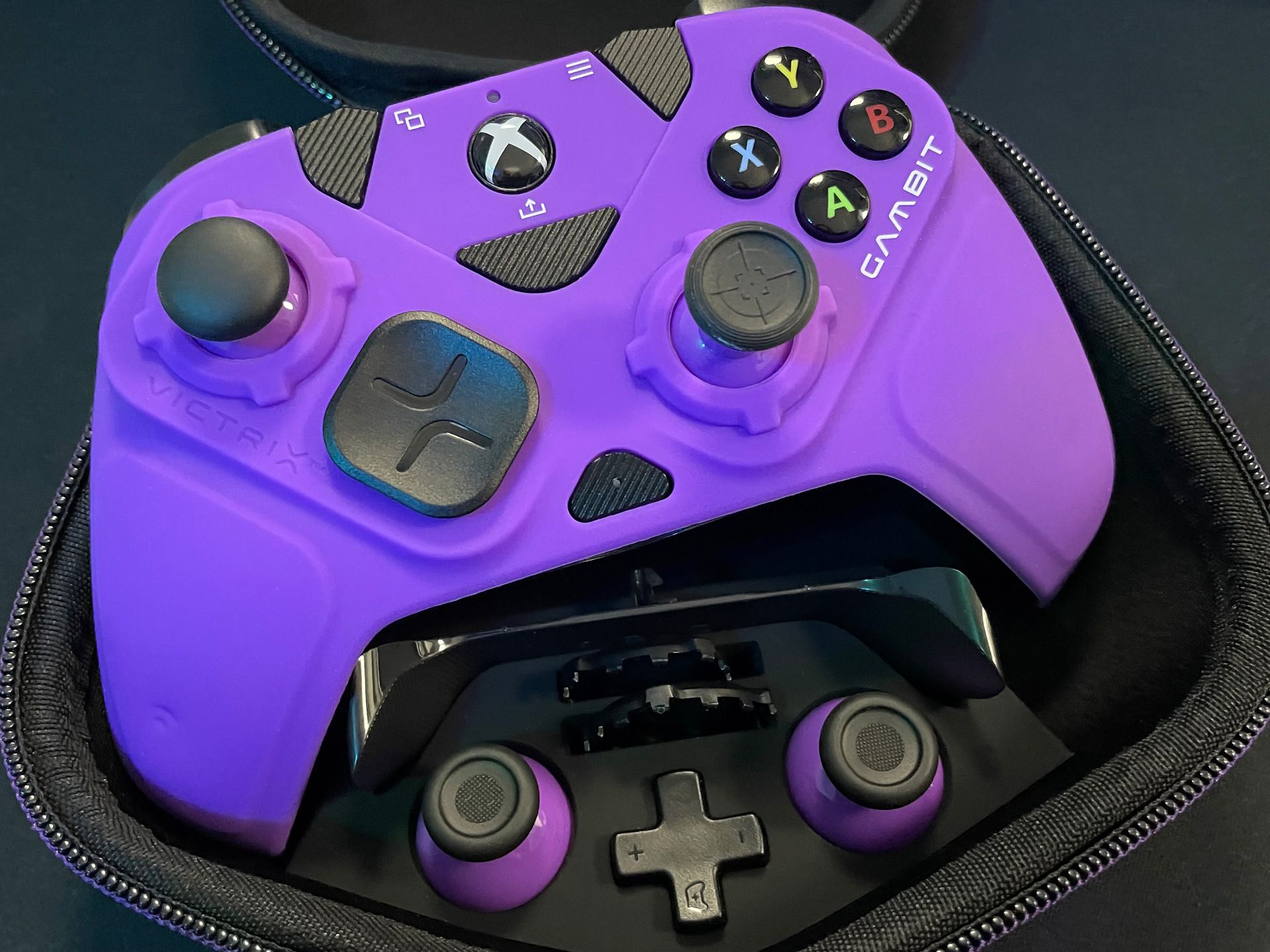 That said, the Dual Core processing does its job – inputs felt instantaneous, especially when using the hair triggers on the device. I do love the customization offered both on the controller itself and through the easy-to-use software, making it possible to completely tune the controller to my specific liking versus just dealing with what I get out of the box.

It is a comfortable controller, and I do like the two faceplate options to give you the choice of what feels best for you at any moment. The addition of built-in Dolby Atmos support is huge and something I hope every manufacturer keeps an eye on in the future, as it adds so much to the experience when pumping the audio through the controller itself (or, say, the Victrix Gambit headset – review incoming there too).

All in all, the Victrix Gambit Dual Core Tournament Controller has become one of my most used controllers over the last month I’ve been using it. It feels good to use and performs admirably when under pressure. It’s allowed me to keep a wired controller at my PC and use my wireless ones for my console only – though I would much rather this be wireless too. While I’m disappointed in the overall cheap feel of the controller itself, it does what it’s meant to do: provide precise and impactful performance while in-game, it does well. With the ability to customize everything down to the gates used around the thumbsticks, it allowed me to really hone in on the experience I wanted when gaming. And while I do hope the next installment feels a bit more premium for the price, it’s not a bad option to keep on your wish list for the holidays.