Turtle Beach, best known for its Xbox and PlayStation headphones, has been a leader in gaming headsets for over 15 years. All these years later, and its team is still hard at work refining their design and packing as many features as possible into each new pair. I recently got to spend some time with the Stealth 600 Gen 2 headset designed for Xbox Series X, Xbox One. Are they worthwhile investment for your next-gen console? Let’s dive in and take a closer look to find out.

Turtle Beach takes its original design for the Stealth 600’s and refines it across the board. Aesthetically the generation 2 feels solid to hold and wear. Thick matte black plastic makes up the outer shell of the headphones and mesh-covered foam padding cushions your ears and the sides of your head. The earcups have been designed to be circumaural and completely encapsulate the ear, providing better comfort for long play sessions.

This smart design is also quite accommodating for glasses. Even after a couple of hours of use I still found them comfortable overall. I did notice that during my first day or so the headphones felt a bit tight on my head, but that subsided over time and they have since been quite comfortable since. I note this not as a criticism but rather as something to be aware of when you buy them. 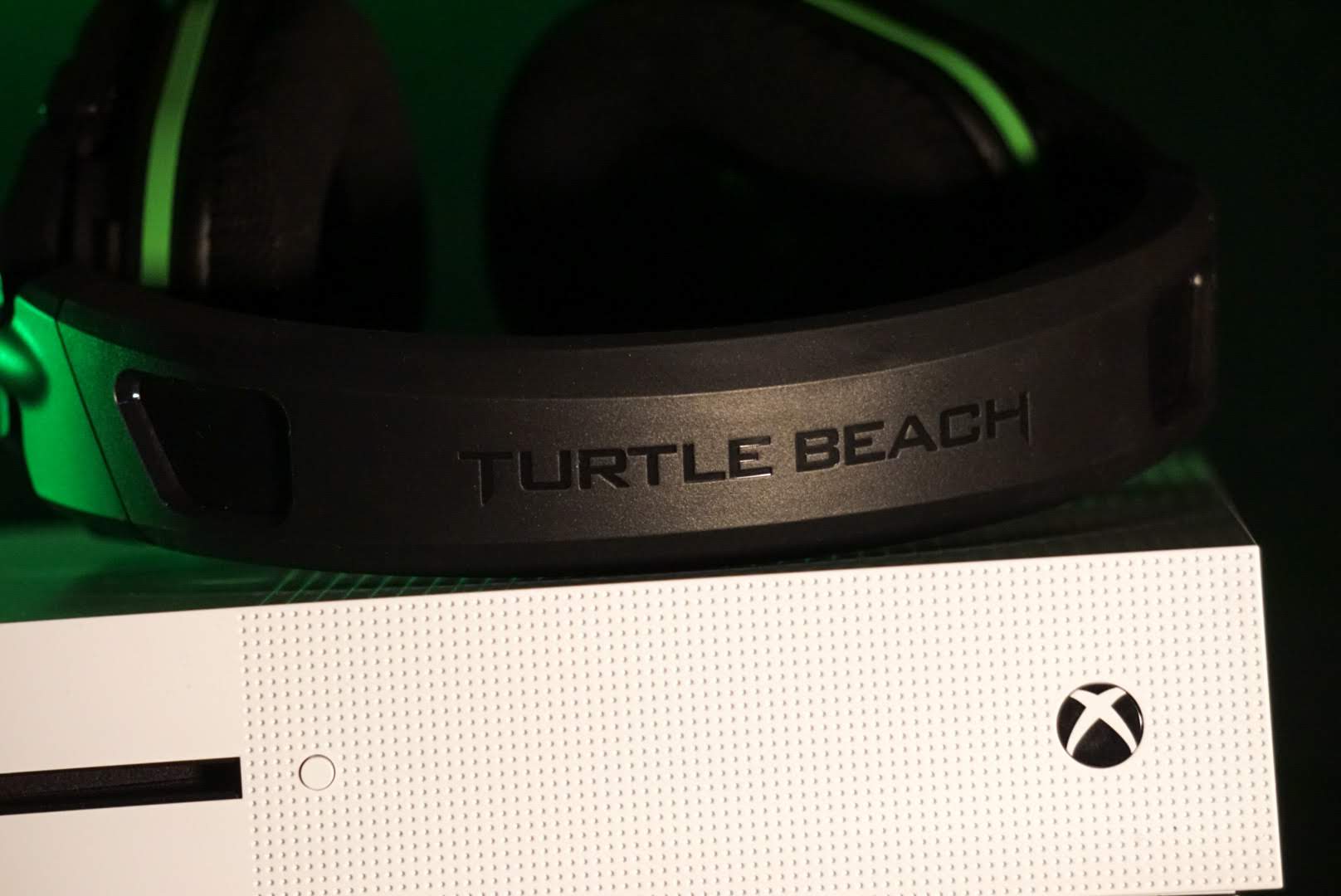 After more than a month of wear, I still find them comfortable. My longest single play session with them to date was a 6 hour Halo Marathon and even after that, I didn’t note any major discomfort. I was impressed at how cool my ears felt after that experience. Generally, long sessions with headphones result in my ears being pretty warm. However, the Stealth’s mesh pads seemed to allow hot air to escape leaving me comfortable and cool.

Stepping away from the headphones and looking at their profile, I appreciate the simple but elegant design. The all-black finish is only accented by two points of color; A small Xbox green stripe that encompasses each earpiece and a small Xbox green logo on each side. It’s clean, it’s simple, but it communicates who makes it and what system it is designed for without having to spell it out.

The 600’s aren’t just a pretty face. The whole control interface has been designed so that you don’t have to take them off to control them. The power button is located along the back edge of the left earpiece along with the audio and chat volume as well as the Turtle Beach EQ button. This nifty little button allows you to switch between four signature audio presets on the fly so you can find that perfect audio mix. In practice it works well, is responsive and offers four fairly distinct audio experiences. 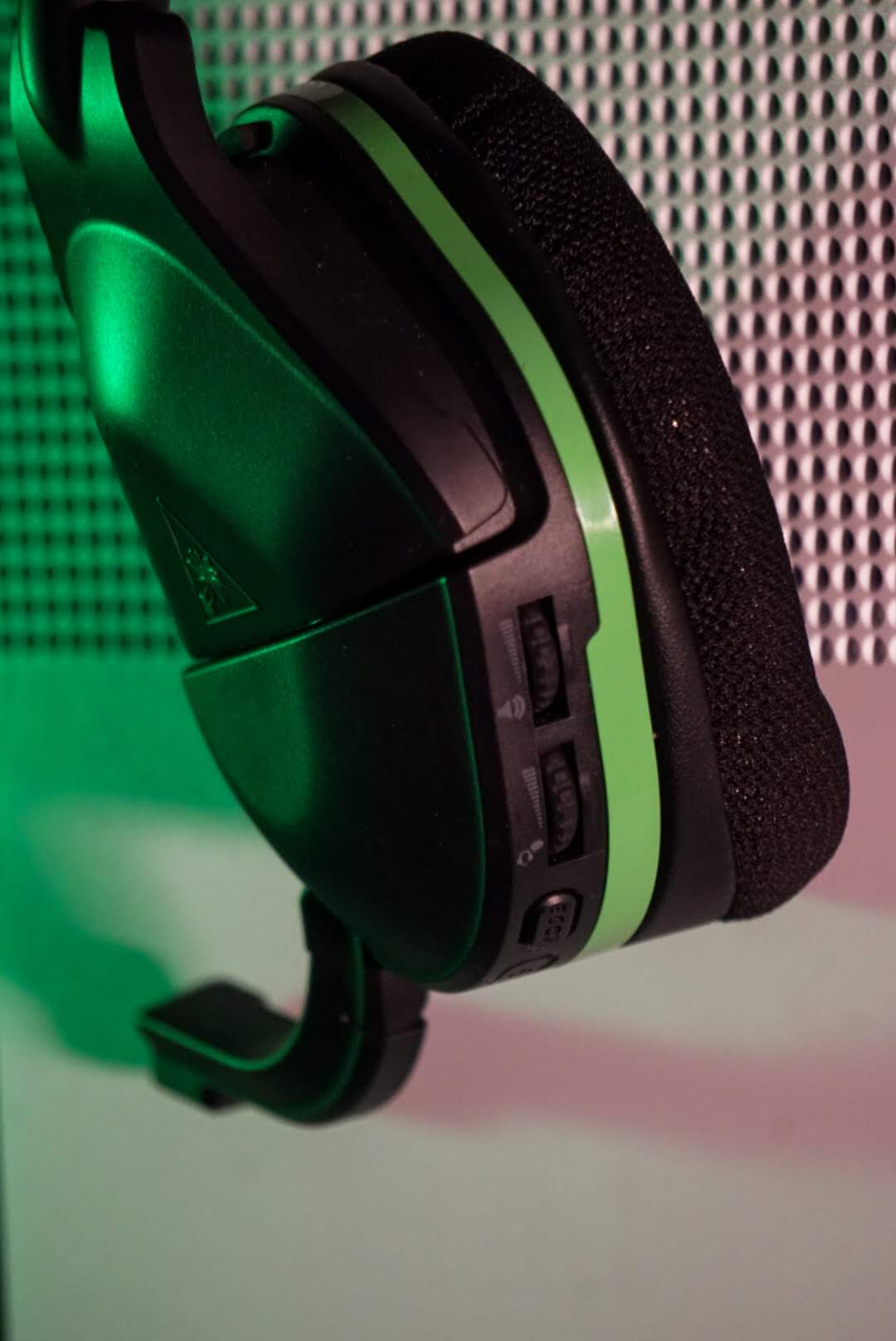 Underneath the four control buttons is a USB C port for chagrin as well as a connecting button for syncing with devices. The Stealth 600’s have been designed for quick, no fuss connection for an easy ‘plug’ and play experience. On my Xbox One, it was as simple as hitting the connect button on the headphones and my Xbox. Within a couple of seconds, it was linked and I was gaming. Connecting to my Windows 10 PC was a similar experience. It did, however, require the Xbox Wireless Adaptor for PC. Once I plugged in the adaptor and clicked “connect” the PC registered it without issue.

The final design feature I wanted to highlight is the Turtle Beach Gen 2 Flip-to-Mute Mic. This design feature is one of my favorite things about the Stealth 600 headphones. The mic is attached and embedded in the left earpiece. It works on a swivel so that when not in use it can be flipped up and essentially blends into the rest of the earpiece profile.

What makes this so great isn’t just the aesthetics of a hidden mic but that when it is flipped up the mic mutes itself. It’s the best muting system I’ve seen. It allowed me more than once to quickly mute the mic to take phone calls or answer a question from my children who were on another floor yelling down to me. When the mic is down and in use it has a second hinge that allows you to pull the mic closer to your mouth for better pick up. The whole system is sleek and sturdy.

The Stealth also comes with a great holding stand and boasts a 15-hour battery life. The stand has a simple but solid metal design that displays the headphones nicely. The battery is charged via the aforementioned USB-C cable. I ran the headphone through its paces and on a full charge got just over the 15-hour mark. Overall I was impressed with the length of battery life.

Not as impressive, however, was the distance at which the signal strength began to break down. I ran a few tests and found that I couldn’t go more than 7 feet away from the Xbox before the audio began to cut out. Now generally I don’t game more than 7 feet away from my system but on those couple of occasions where I was chatting with teammates and wanted to run to the next room to grab another coffee, I was let down a bit. 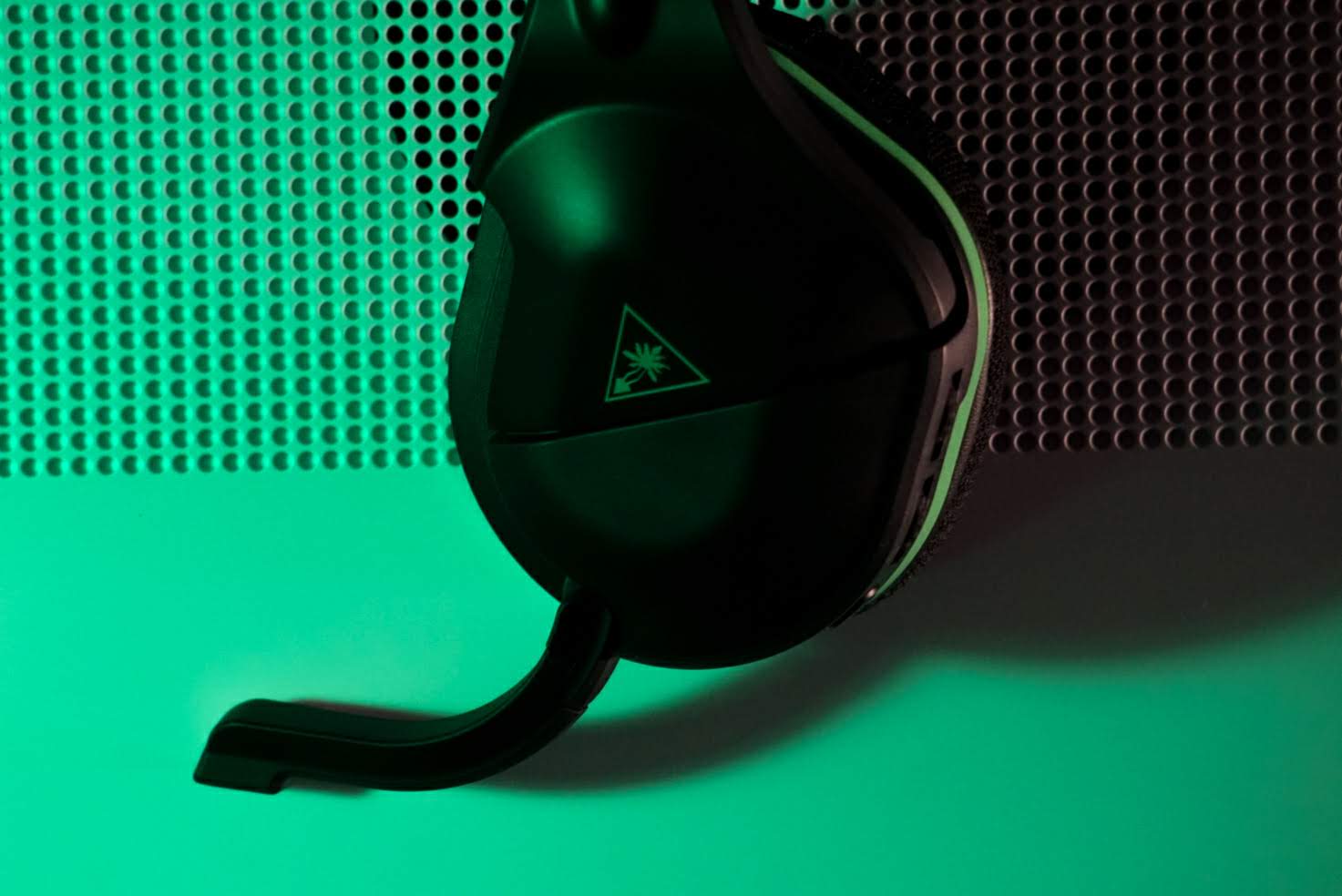 Aside from aesthetics, the 600’s work hard to create a better sounding gaming experience. Driven by 50mm speakers, supported by Windows Sonic software and refined with TB’s very own SuperHuman Hearing system, you’ll hear a pin drop at your 3 o’clock while spinning around to face off against the enemy that is trailing at your 6 o’clock.

I tried these fancy features out in a few matches of Halo 5 to see just how much it improved my game. I have to confess that while my aim is still terrible, I did find that the extra sensitive audio ques did make it a lot easier for me to be aware of my surroundings. I was quite impressed at how much I began to rely on audio cues to navigate the maps and hunt down enemies.

In regards to the overall sound quality of the TB Stealth, it’s a solid experience. The earpieces have been designed to better trap sound waves and thus create a fuller, richer sound for your ears. In practice, it sounds better than I expected if I’m being honest. The 600’s provided some solid sound and helped bolster the feeling of immersion during gameplay. 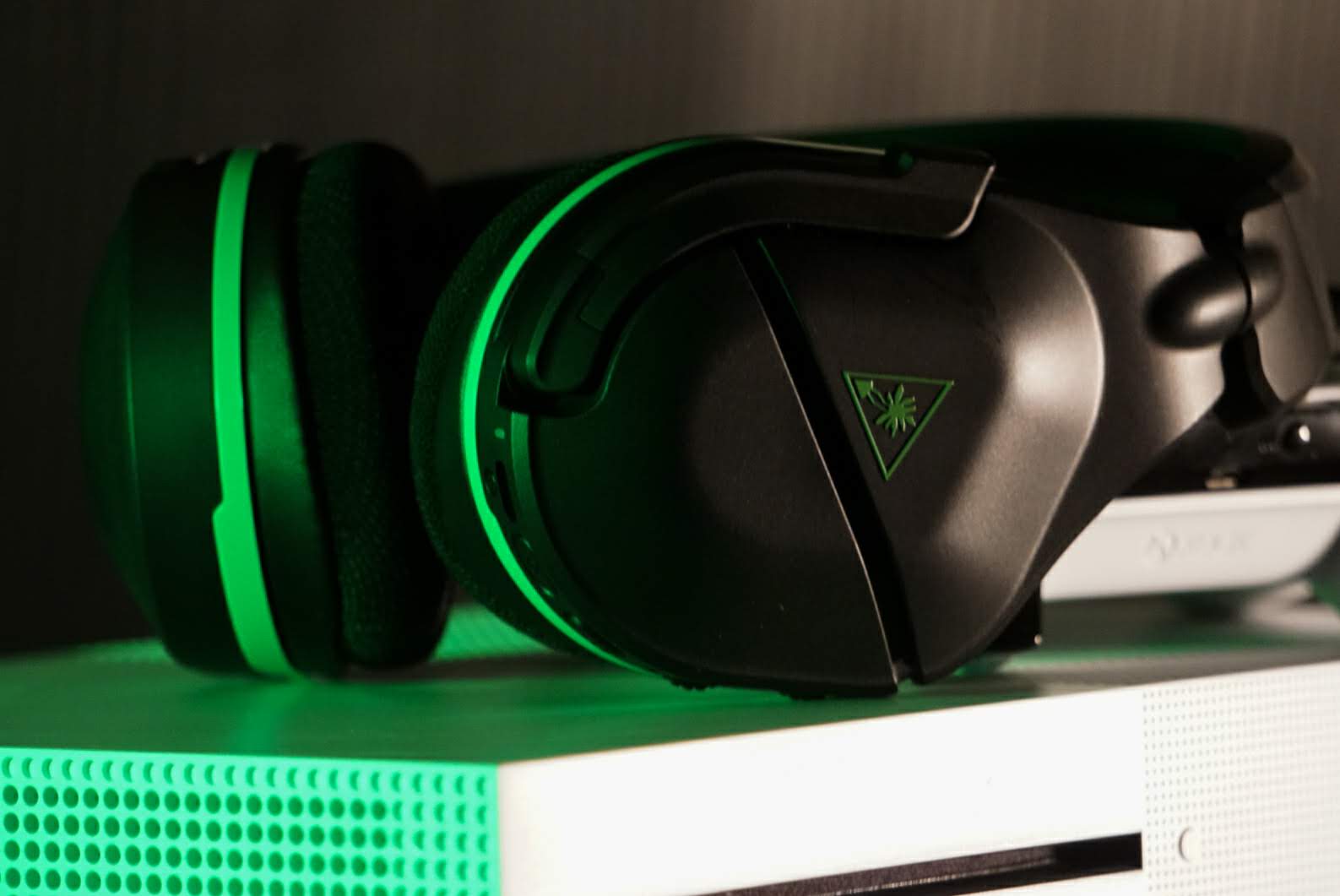 I spent quite some time cycling through the aforementioned EQ presets and was pretty happy with the overall quality. I did note that the high-end treble is a bit muffled when I had the headphones turned up but it wasn’t dramatic or distracting. The bass boosted mode was clean as well which I’ve found over the years isn’t typically the case with gaming headsets.

The microphone that comes with the Stealth 600’s is another quality piece of hardware. This compact omnidirectional mic is exceptionally sensitive and had no trouble picking up my voice. Additionally, the audio it did pick up was clean. I didn’t note any distortions during test recordings and when gaming with friends on Xbox they all commented on how crisp it was for a headset mic.

On the PC side, Audacity and Cubase had no problem using the mic as an audio source during my PC tests. However, I did struggle to get the mic to work using Discord which leads me to believe that it may be a software compatibility issue on PC.

The Turtle Beach Stealth 600 Gen 2 Gaming headset is an incredibly solid peripheral. Its sleek and smart design coupled with its no-hassle setup and great sound quality should make it a go-to for console gamers. Retailing at $99.95, its a great price point for a solid piece of equipment.