Tin HiFi is a brand that made its name on delivering excellent sound quality for a competitively low price. The new Tin HiFi T5 comes in at $109 which is quite the crowded category when it comes to in-ear headphones. Featuring a brand new DOC diamond diaphragm dynamic driver and titanium housings, it’s out to impress but can it compete? Find out in our review.

Tin HiFi always seems to punch above its class and that’s definitely true here. Over the last two years, we’ve seen the company aim higher in the caliber of products it’s delivering. The planar-driven P1 ($149) and P2 ($339) come to mind. The T5 approaches a different space coming in at $109 at launch — that price is set to increase to $129 at some point in the future, however, and will ultimately be more expensive than impressive mid-fi sets like the Moondrop Starfield or ThieAudio Legacy 3 ($119). That means the T5 really needs to impress to make it worth picking up over some of the other options out there.

It seems the company is out to impress, however, using a brand new DOC diaphragm dynamic driver. This driver is an evolution of the diamond-like carbon diaphragms we’ve seen on a wide array of headphones over the last several years. It evolves the design of the traditional DLC diaphragm by adding extra rigidity, making it even more like diamond than before. Here’s how Linsoul describes it:

The new 10mm DOC driver features an enhanced molecular carbon atom structure and composition that more closely mirrors that of diamond. The new structural design allows the DOC diaphragm to be thinner, while being 60% stronger and more rigid than that of traditional DLC diaphragms. Furthermore, due the closer proximity of the carbon atoms to each other, the DOC driver is 5 times harder than that of typical ceramic diaphragms.

The added rigidity allows for better response and detail across the frequency spectrum but particularly in the upper registers. Just as importantly, the bass is also improved with faster response. The characteristics of the DOC driver allow it to (theoretically) have more punch and faster decay in the low end, which can result in a sound that is more realistic, detailed, and fun. Tin also claims that the new DOC driver allows the frequencies to scale linearly which enhances the detail and texture you can hear in the mids where vocals and guitars live.

The new drivers work in conjunction with a refined internal design. The Tin T5 uses multiple internal acoustic chambers to further tune the sound that makes its way to your ears. This is but one strategy manufacturers use in the tuning process. Altering the walls of these chambers impacts sound reflection and can dampen certain frequencies. For a gaming perspective, you might recall the HyperX Cloud Alpha applied the same philosophy with its dual-chamber driver system to preserve the mids and highs while still delivering excellent bass. 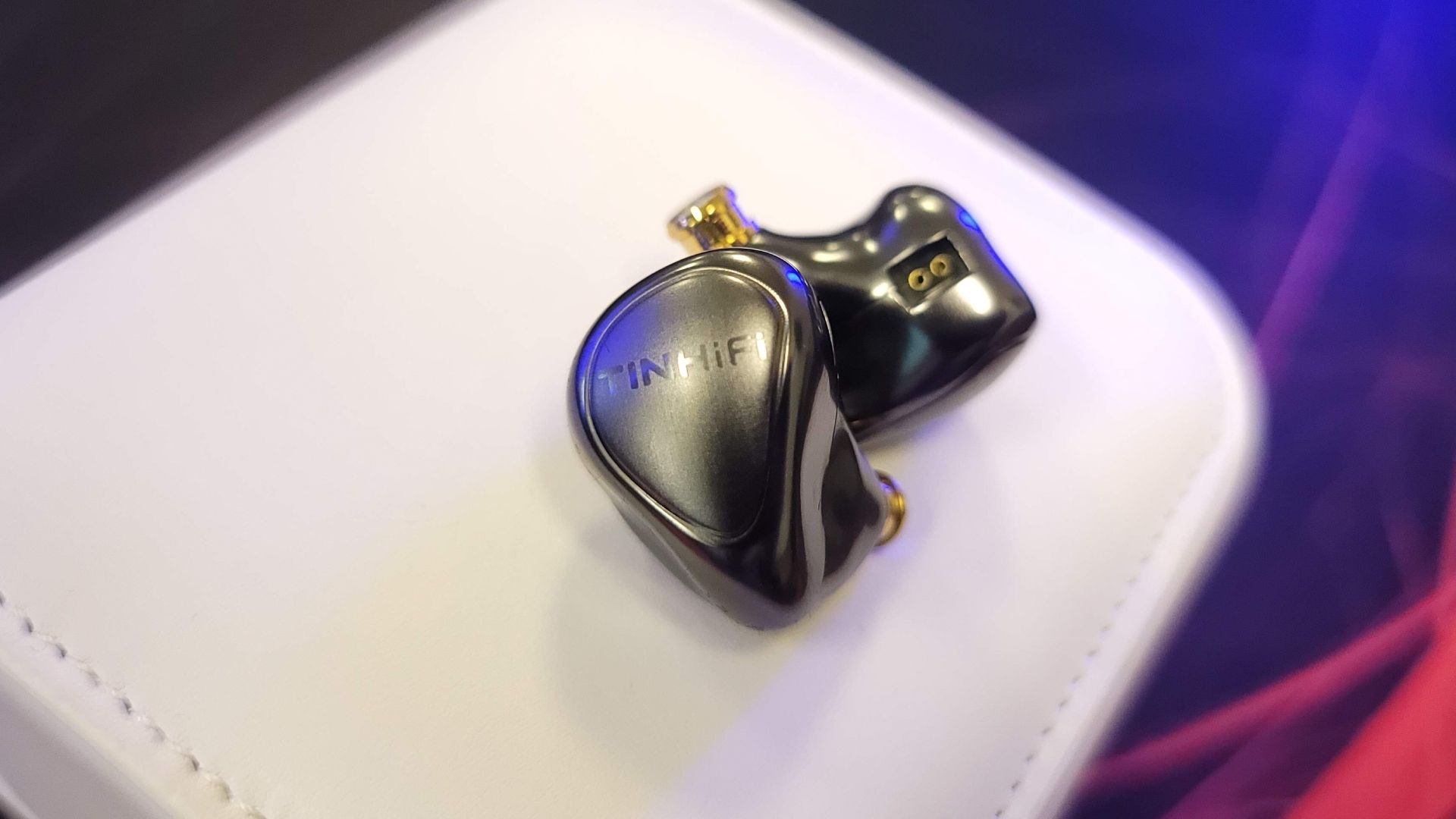 Moving to the outside, the T5s use a titanium shell that looks great, as long as you’re not looking for a fashion accessory like the SeeAudio Yume. It’s a dark, gunmetal gray with brushed faceplates to prevent fingerprints. The design is much more like a traditional IEM than most of Tin Audio’s last fare and I think it’s better for it. The company also moved to a two-pin detachable cable design, which I’m grateful to see. MMCX is a needlessly annoying connector that’s difficult to remove. Here, you can swap cables quickly and easily with no fear of damaging the IEM. 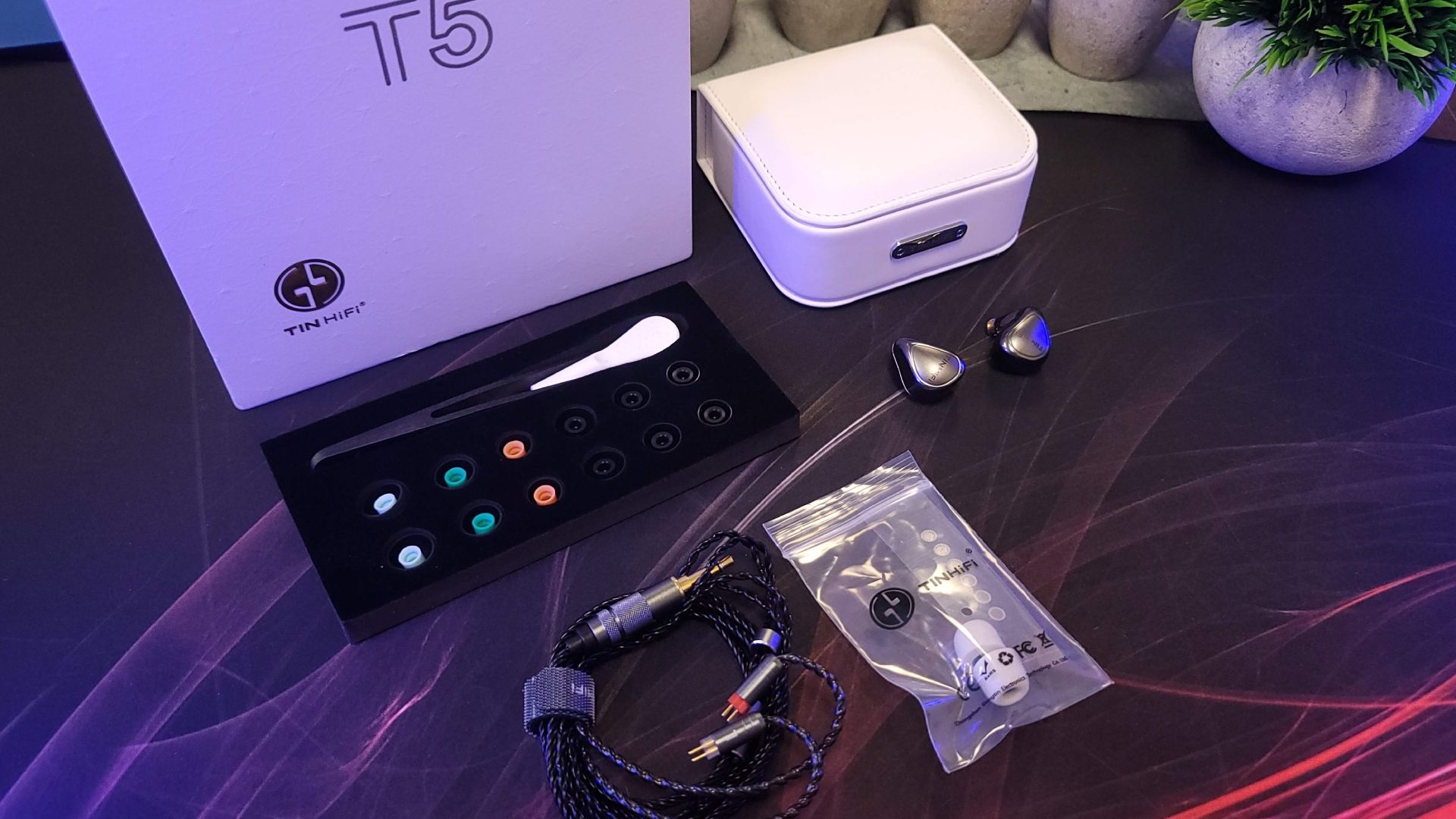 The unboxing experience was impressive. I don’t put much stock in packaging since it tends to get thrown out anyway but Tin did a nice job of making this feel like a premium product. The earphones come with one of the nicest cases I’ve received with an earphone — white synthetic leather with a magnetic clasp and plenty of room to store the earphones and some accessories. It also came with six sets of silicone tips, one pair of foam tips, three sets of replacement nozzle filters, a detachable braided cable, tweezers, and a cleaning brush. All told, it’s a nice package for $109 or even $129.

First impressions are positive overall. I really like the case and the buds themselves. The earbuds are a bit heavy but are very comfortable, which I’ll discuss more in the next section. The only thing I don’t really like is the stock cable. It’s fine — it has nice metal bits at the end and on the y-split and isn’t microphonic, but I don’t like the plasticky coating Tin used. It’s prone to tangling and getting hung up on clothes, so I plan to swap it out. 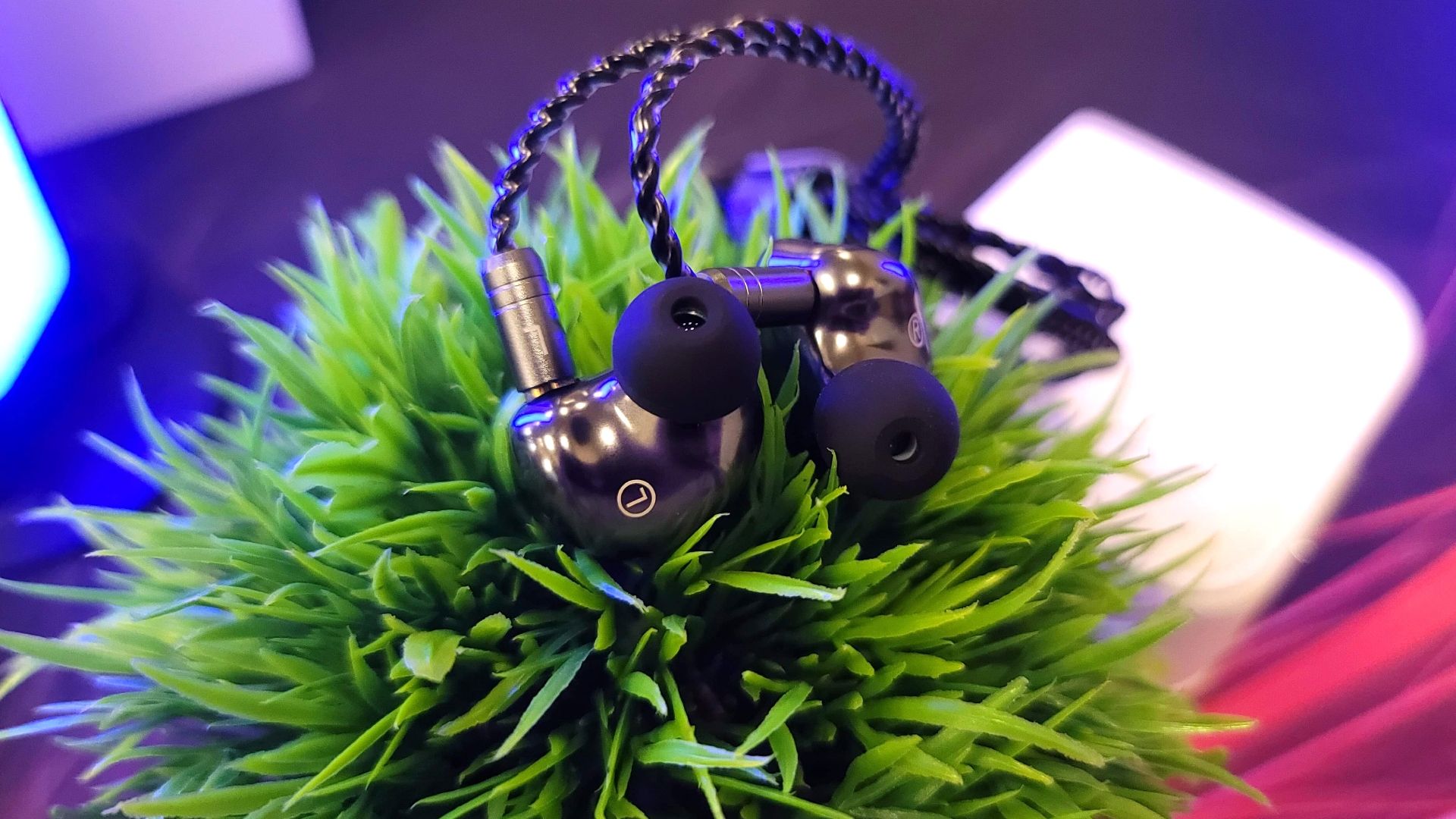 Tin HiFi claims to have applied machine learning strategies in the design of its titanium shells to “match every curvature of the typical human ear.” That strategy has paid off, at least for my ear shape. With the appropriate-sized tip, I was able to find a comfortable, secure fit almost right away. The curves on the inner portion of the shell really did match my ear well and allowed me to wear them for upwards of four hours without any soreness whatsoever. Given the weight of the buds, I did find that they were more likely to come loose when running, so using them for exercise may not be the best choice. They are on the larger side, however, so users with smaller ears may have a harder time finding a fit.

It’s worth noting that these tend to feel pretty cold on first use. I’ve used many metal earphones but the T5s have more surface area making contact with your skin, so the temperature difference stands out more than any other I’ve tried. They warm up quickly, so it’s a minor issue overall.

Enough with the background - how does it sound? For my style of music, these are probably my favorite Tin HiFi IEM. They have good bass extension, though it’s not quite as defined as I would have hoped from the described characteristics of the new driver. To my ear, there’s more sub-bass, so these IEMs can offer a good rumble and slam, but it sounds softer than the DOC driver led me to expect.

A good example of this is in Against Me!’s Cliche Guevara. The bass is certainly presented and accounted for but lacked the texture a quality beryllium-coated diaphragm could deliver. For pop, Billie Eilish’s Bad Guy was much the same. The kick drum had punch and thump but the walking bass line wasn’t as defined as a higher-end dynamic driver IEM like the Fiio FD5. Now, the FD5 is also triple the price, so I would expect it to be more defined. What’s here isn’t bad or unenjoyable, especially if you enjoy rock or pop where that thump overwhelms texture anyway, but is definitely something to bear in mind. 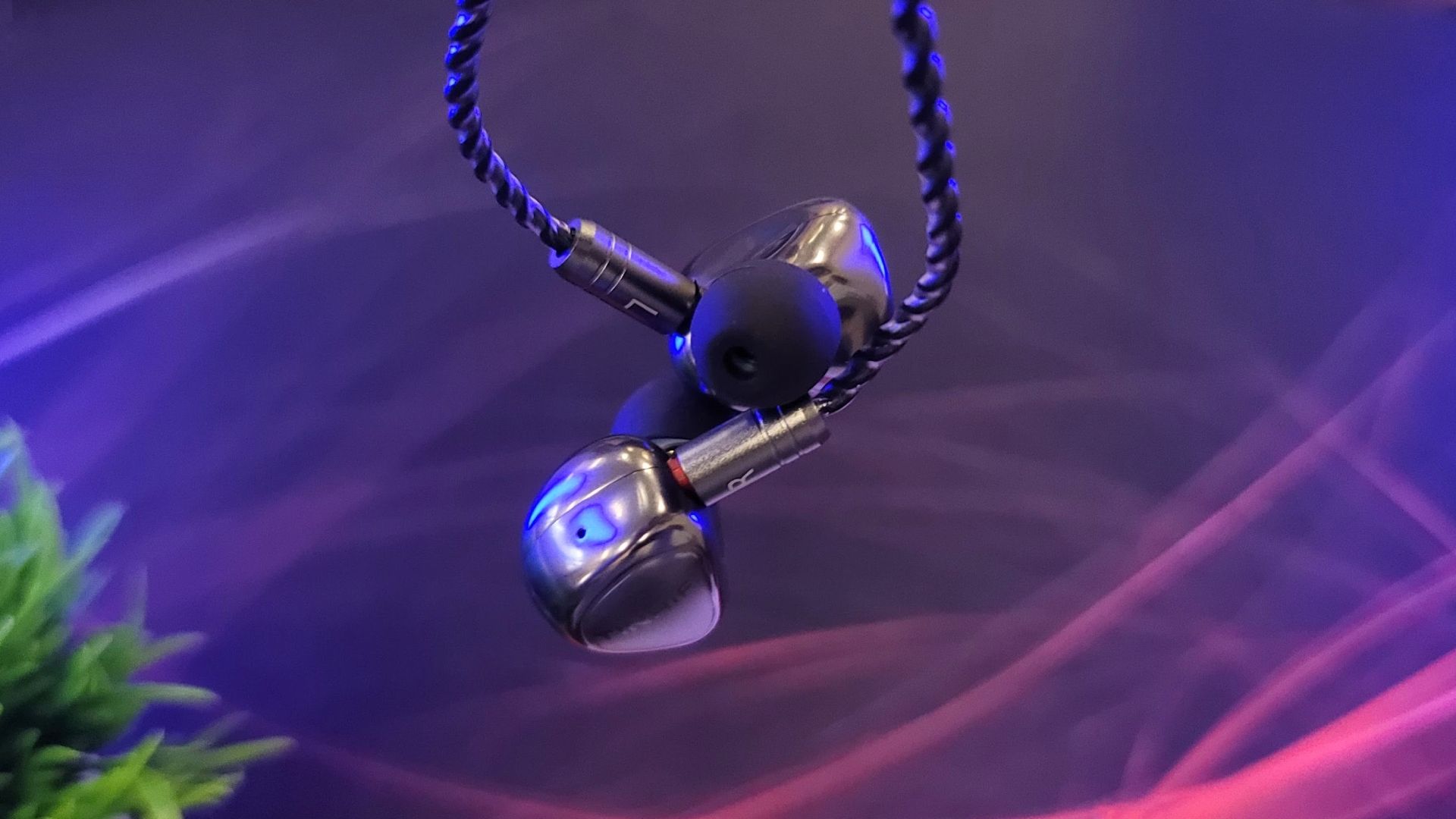 The star of the show here is absolute the mids and middle-highs. Vocals sound are intimate and come right forward in the mix and present with clarity and detail without ever sounding sharp or piercing. Whatever detail is lacking in the bass guitar comes right out in electric and acoustic guitars. Angel Vivaldi’s Without Words album was a joy to listen to. The machine gun double-bass drum slam injected drive and energy to the overdriven guitars. Angel’s guitars have a tendency to sound sharp on sibilant earphones and can be fatiguing but here I just relished the texture it was the T5s were able to draw out.

The soundstage is also better than I expected going in. The new drivers and acoustic chamber design is able to pull sounds apart more than either the Starfields or Legacy 3s. The T5s still have the closer “IEM sound” about them but offer a better than average sense of space to my ear. They also worked well for some light gaming though of course won’t compete with a dedicated gaming headset in soundscape and spatial awareness.

Soundstage aside, these earphones actually worked very well for gaming. Their comfort allowed me to play with them for extended sessions and the bass punch made cinematic moments really pop. The elevated middle-highs also did a great job of drawing out details like footsteps and atmospherics like breaking class or magic summons. 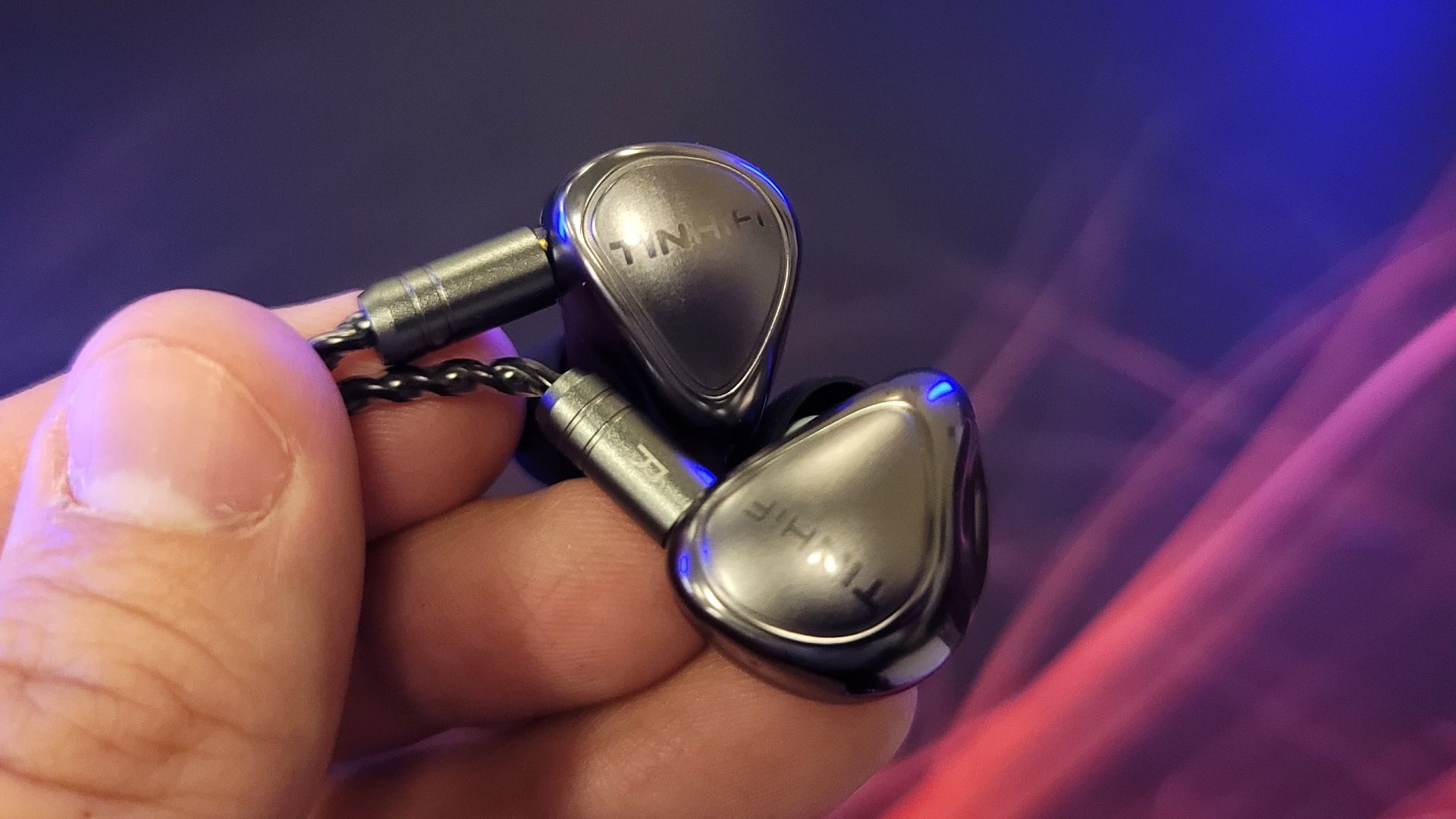 The Tin HiFi T5s may not offer the same kind of detail extension as more expensive earphones, but for rock and pop, they’re great. Compared to the Moondrop Starfields, the T5 has the edge in these genres with some of that mid-range detail but they fall short of the ThieAudio Legacy 3s in low-end detail and texture. The T5s trump both in durability and comfort, however. Compared to Tin’s other dynamic headphones, these are a high water point.

In conclusion, whether these will be a good fit is likely to depend on what you plan to listen to and what you value most in your listening. These are unquestionably a fun listen for rock, pop, and gaming. If you’re a detail enthusiast, they may leave you reaching for the P1s or P2s. If these sound like they’re up your alley, head over to Linsoul to pick up a pair before the price bumps to $129.99.