BLON is best known for its in-ear headphones but it’s breaking new ground this year with two over-ear headphones. Today, we’re looking at the BL-B60s, a pair of headphones designed to deliver pounding bass and wide soundstage, and look good doing it with its dark walnut earcups. Are they worth the $155 cost of entry? Find out in our review!

The BLON B60s are quite nice-looking headphones. They feature dark walnut earcups, finished so the natural grain shows through, giving them an earthy, natural look. They’re available in either silver or black frames to suit your taste. I was sent the black frame version and love the look.

The headphones are driven by a pair of large 50mm dynamic drivers. They’re composed of a four-layer composite and finished with a beryllium coating to improve low-end response, speed, and detail. Large dynamic drivers often excel in bass performance but poor tuning and/or poor quality can leave the bass sounding bloated and undefined. Here, the beryllium coating is applied to add rigidity to the driver, increasing its responsiveness and clarity. 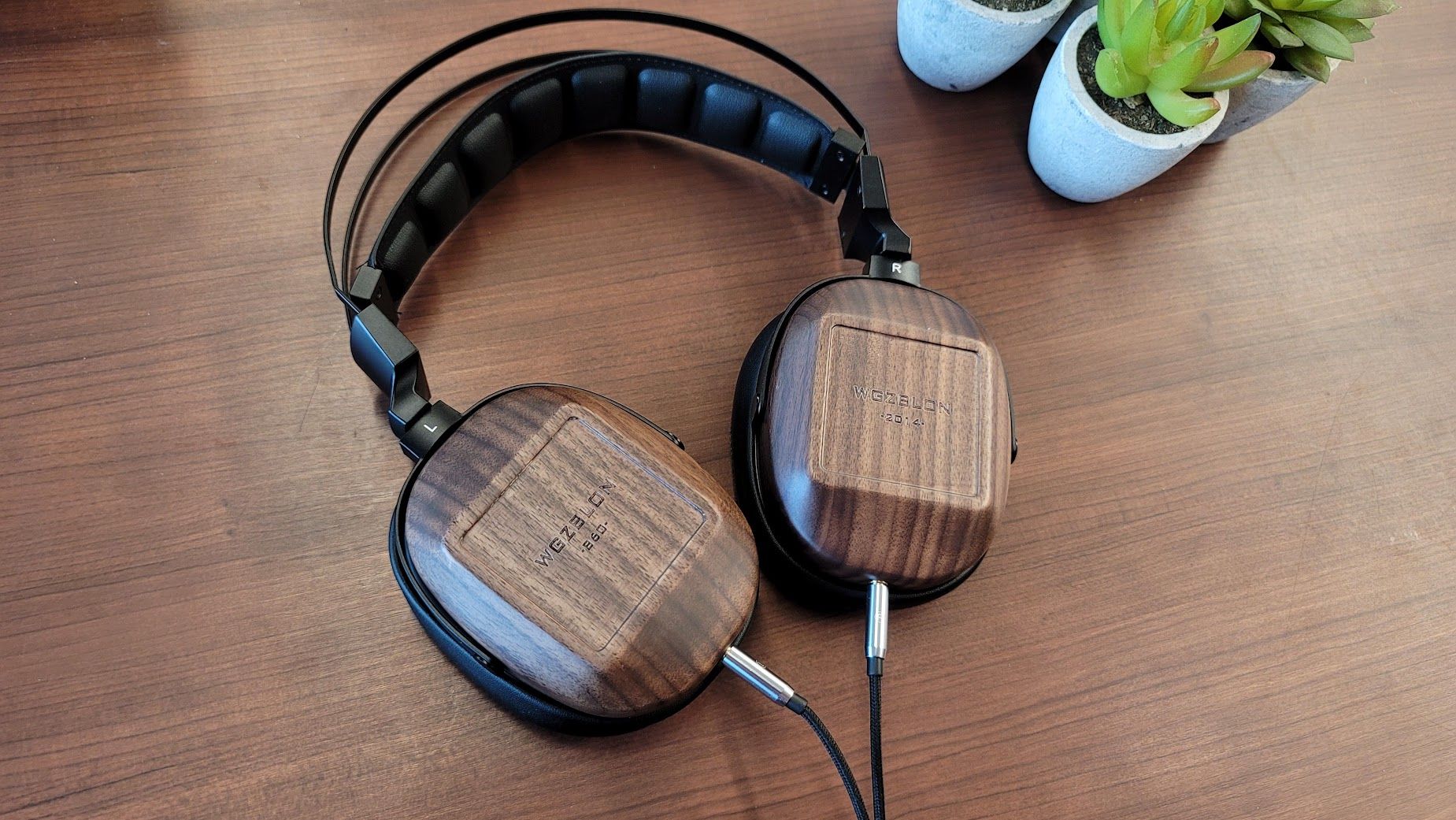 The drivers are rated for 20-20kHz, covering the span of human hearing. There was no distortion that I could hear, even at loud volumes and through a sine sweep, so the quality it quite good. They’re not difficult to drive (a normal dongle DAC will do it) and there is a bit of scaling that occurs with more power, but it’s not exceptional. You’re going to get the same performance from these from a high-powered amp as a dongle, as long as it’s not exceptionally weak.

The headphones are quite comfortable (which I’ll get to shortly), thanks to well-done pads and a suspension headband made of protein leather. The pads are hybrids, with fabric on their faces and leather around their sides and inner ring. This helps them avoid sweating while also maintaining bass performance. The headband is made of protein leather but works well to sit comfortably on the top of the head.

Finally, we have the cable, which is also quite nice. The B60s use a detachable cable that connects independently to each earcup with 2.5mm mono jacks. The cable is nicely braided and flexible. The cable ends are all metal and there’s good strain relief at the 3.5mm termination. It’s a high point in this package! 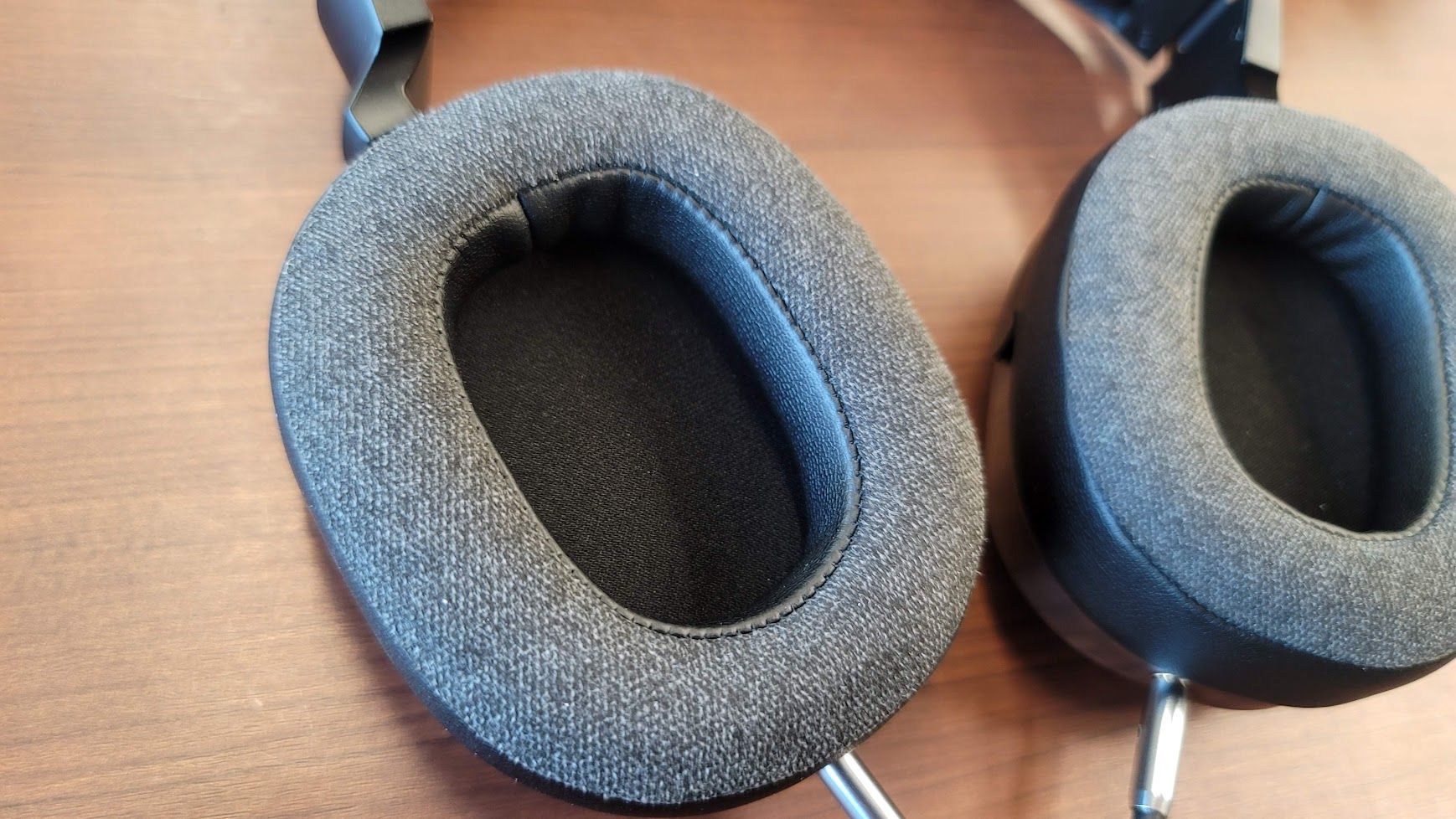 The B60s are a reasonably comfortable headphone. They’re light at only 264 grams and the suspension band is well done, effectively distributing its weight and keeping hot spots away for 1-2 hour listening sessions. The pads are also comfortable with the fabric feeling nice on my skin. Heat build-up is an issue, however, so mini-breaks were necessary in the warmer rooms of my house. 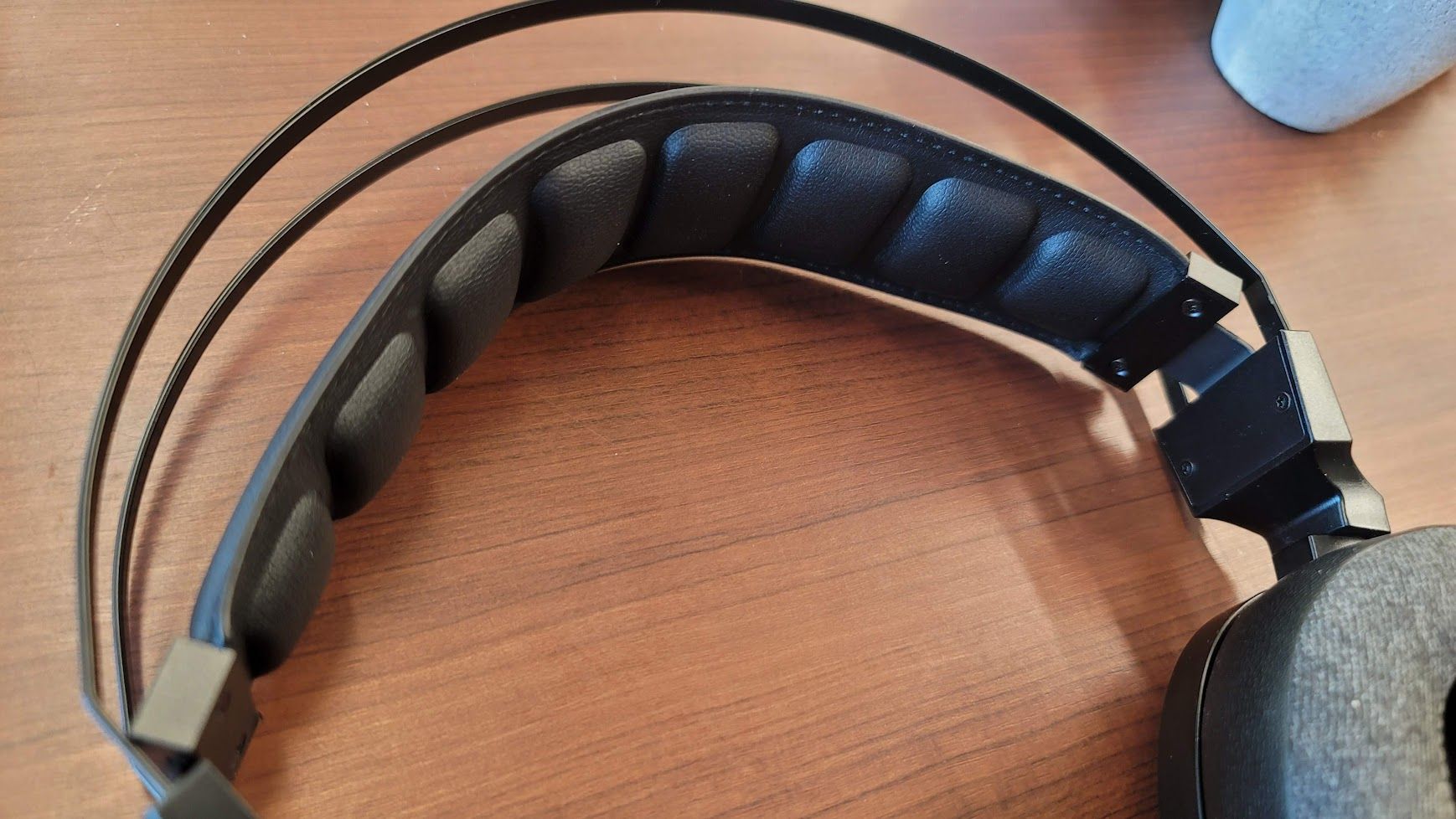 Comfort isn’t the big issue with the design of the earphones, it’s the terrible headband. Above the leather suspension band is a steel frame that rings like a tuning fork anytime it’s tapped. The ringing travels straight through the earcups and into your ears. A simple rubber damper would have greatly reduced this issue, but this is really an issue that should have been caught and corrected in the design process.

The B60s are an interesting headphone in more ways than one. Over the last week, I’ve been able to spend a good amount of time listening to them with different genres of music and even for some gaming. BLON’s bass-heavy tuning makes its return here, bigger and bolder than ever, with a nice rise in the upper mids and highs to create a V-shaped tuning.. For pop and hip-hop, it can be darn good. For other tracks, like guitar-driven metal, not so much. This is a headphone that is going to lean heavily on the music and games you plan on listening to.

Let’s start with the positives. The bass has thump — or more correctly, the sub-bass has thump. I was surprised at how deep, wide, resonant the sub-bass is. This is definitely bass you can feel, even on tracks that may not have big pounding bass in the first place. Coheed and Cambria’s Pearl of the Stars encapsulates this. On neutral headphones, the bass line hangs in the back but the B60s push it right to the front. I’ve never heard the song sound so big and cinematic. 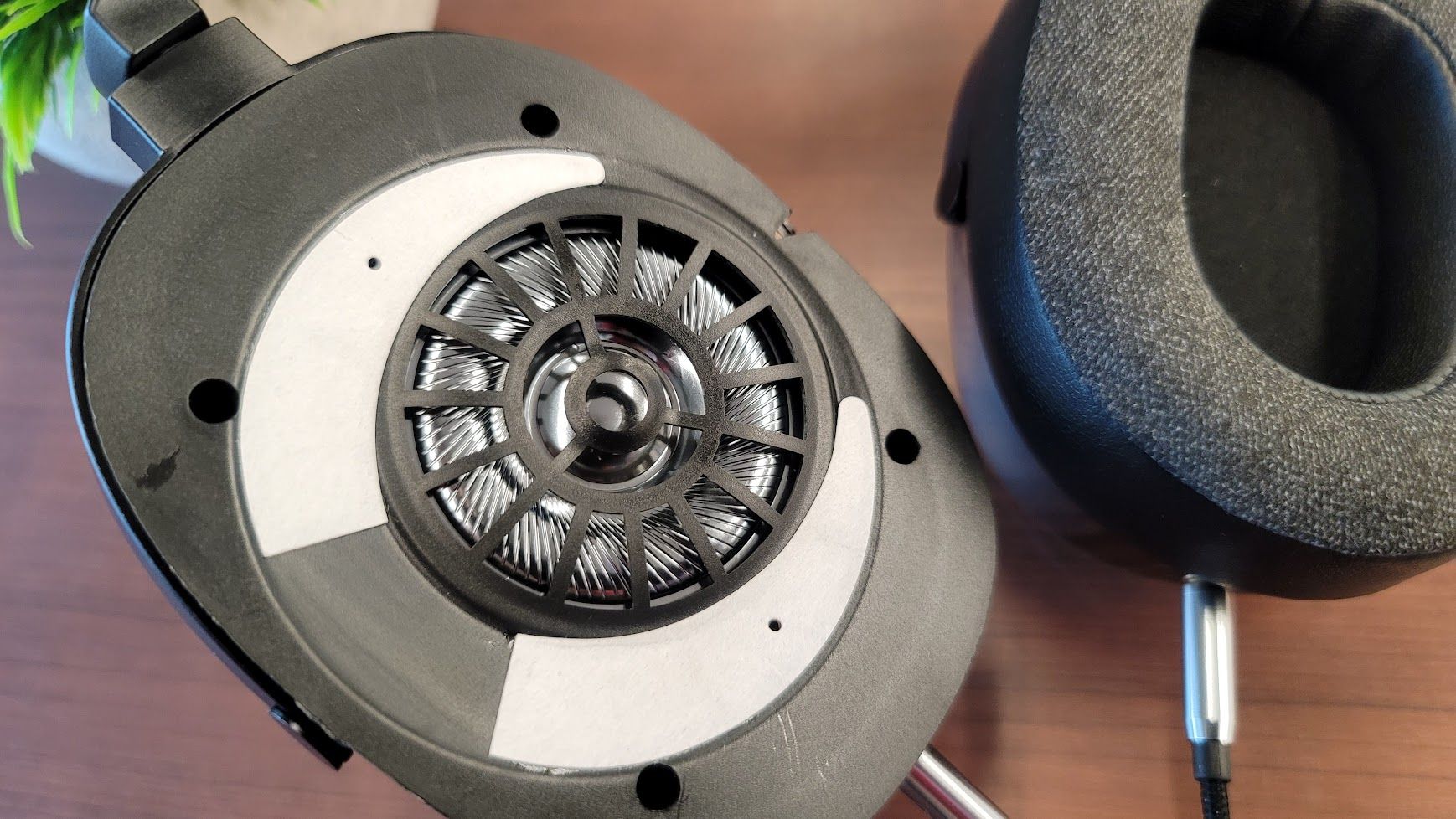 At the same time, there are times the strong sub-bass can become overwhelming. The resonance is wide enough that it crowds out the mids, especially in songs where the other instruments are less prominent (like acoustic tracks that also have a solid bass line). It’s not bad enough to make those tracks unlistenable but did have me craving an EQ to dial it back a touch.

At the same time, there’s a good amount of pop and sparkle in the upper mids and highs. Cymbals, snares, and hats pop right out of the mix. If you like hip-hop, songs thump, snares and high-hats crack, and other instruments like acoustic guitars are clear and detailed. Love the Way You Lie by Rihanna and Eminem perfectly encapsulated what this headphone does well. On the EDM front, Shadows by Seven Lions is an absolute showcase of bass slam, layering, and texturing with the powerful synths. The sub-bass rumble makes these headphones sound big.

For other types of tracks, like guitar-driven metal, it’s a mixed bag. Angel Vivaldi’s Dopamine sounded hollowed out. The scoop in the mids makes it hard to hear the detail and layering in the rhythm guitars. This was also true in Atreyu’s Bleeding Mascara: the opening was great with the machine gun double-bass pound but once the song got started properly, the body — those chunky, chucking guitars — was too far back to sound great. 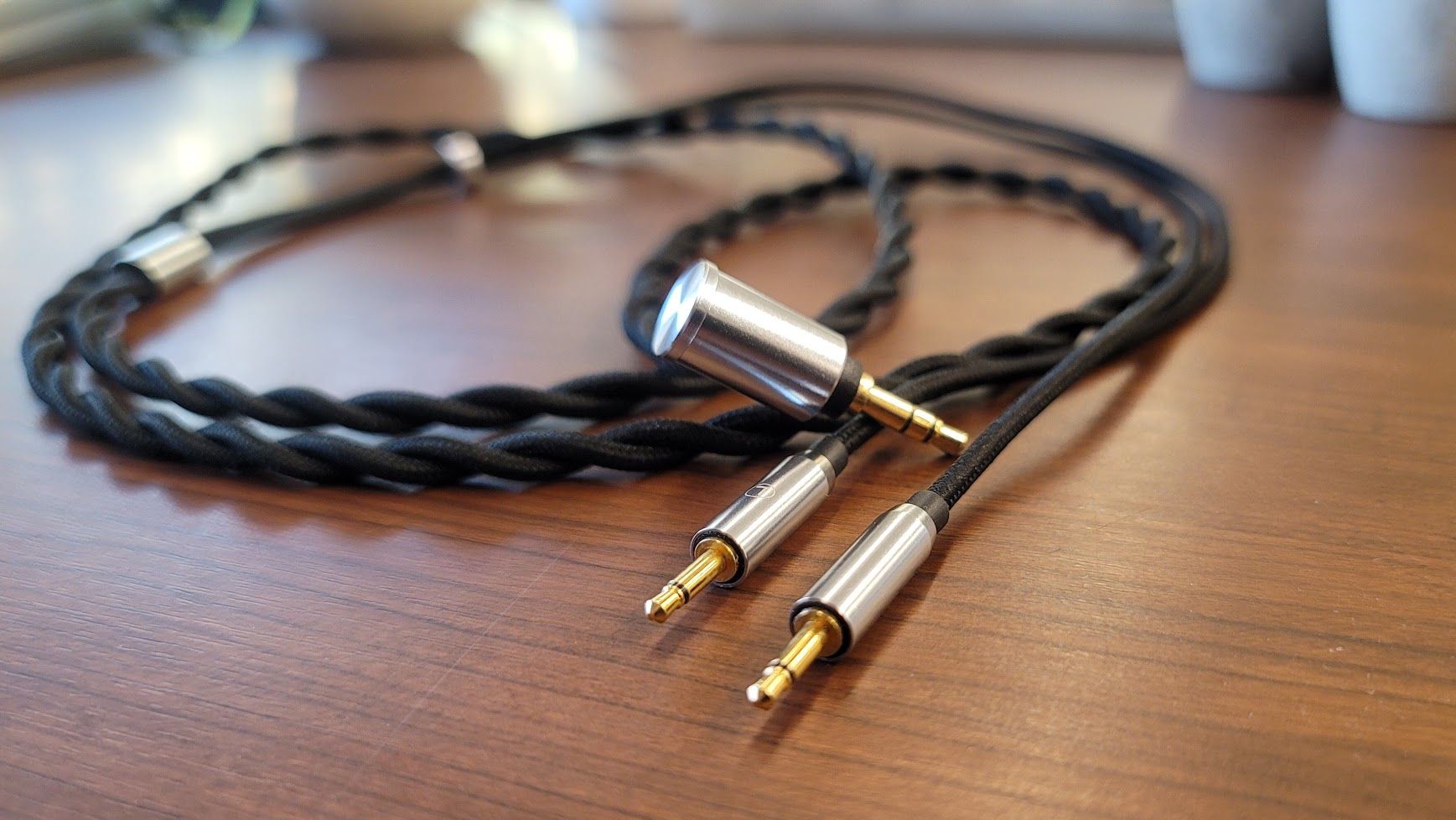 Vocals, on the other hand, are free of the scoop. They’re lush and detailed, popping to the front of the mix, closer than the instruments. Whether it was a male or female vocalist, I thought these sounded very good.

The other high point is the surprisingly large soundstage. For being a closed-back, these sound spacious. They’re not quite at the level of a good open-back headphone, but these over-perform for being closed backs at this price.

Given their tuning, these seems like an especially good fit for mainstream listeners and non-competitive gamers alike. The low-end thump and mid-treble sparkle mean that explosions, cinematics, and sweeping scores will sound bigger than ever. Unfortunately, one of the things that gets lost with the mid-scoop is enemy footsteps. If there’s any kind of action, they become very hard to hear, so stick with single-player only. 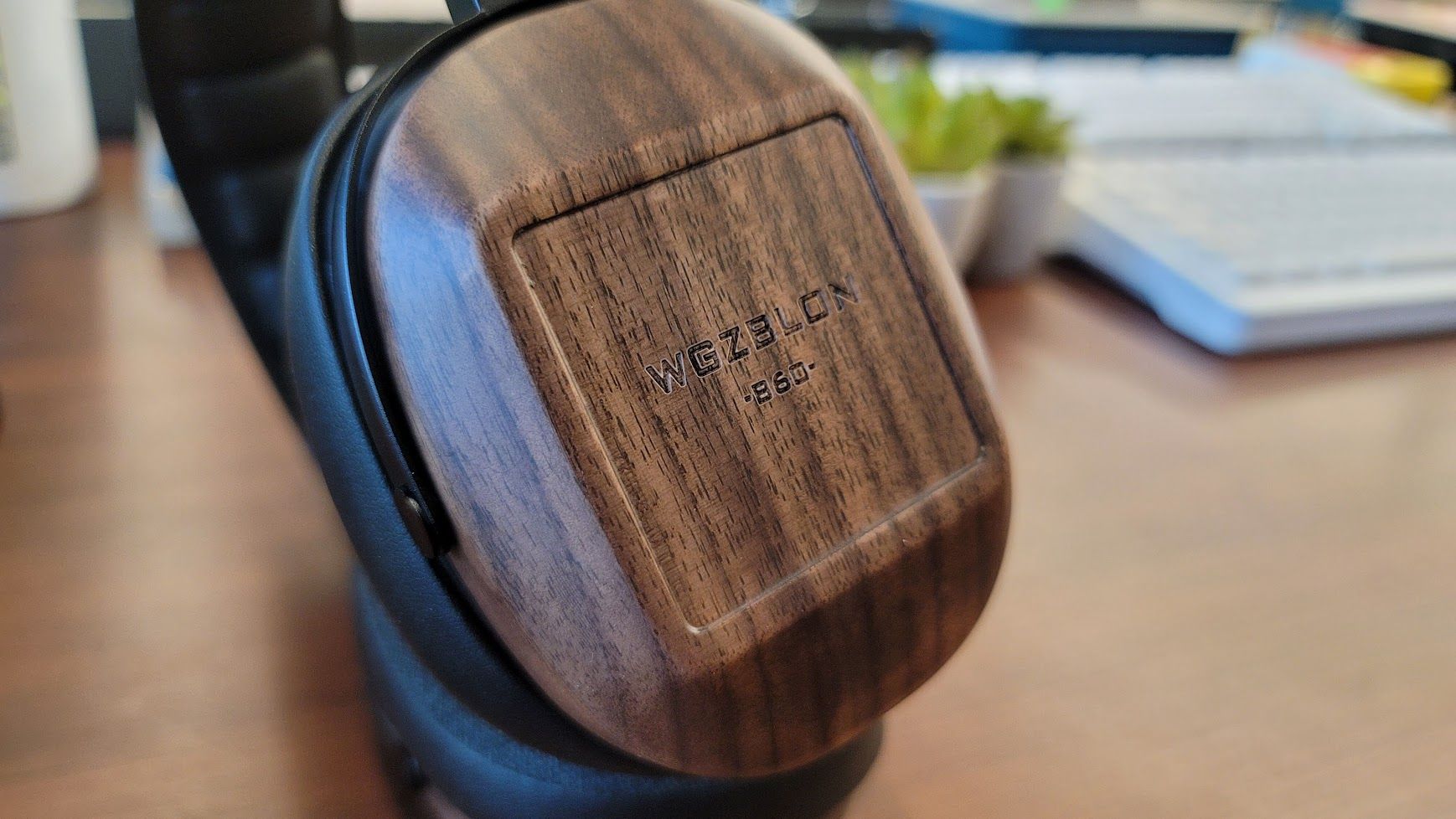 So, the takeaway: the driver BLON used here seems more than capable of big bass and great detail. It’s just tuned in such a way that the mids fall back a bit too much for certain kinds of music and sub-bass can occasionally become overpowering. If you’re a fan of the guitar-driven music with heavy rhythm guitars backing up leads and vocals, you may want to add you own EQ to make the most of them.

But, then there’s the issue of price. They’re just too expensive for what they are. Consider: for $25 dollars less, you can pick up the HIFIMAN HE-400SE, a widely regarded detail monster that doesn’t suffer from the same tuning issues and offers and even more spacious soundstage. It’s not a 1-to-1, because that’s a planar, doesn’t have the same level of bass (even if you were to roll back the B60 and bring it in line), and requires more power to drive. Still, it puts it in perspective how pricey the B60s actually are.

And then there’s the headband. Good gravy, it’s bad. What’s worse is that this is an issue that is 1) easy to solve; and 2) impossible to miss in any kind of testing. Headphones have had this figured out for years, so there’s really no excuse for a steel frame that rings like a tuning fork straight into your brain.

Still, when the B60s hit, they hit hard. For pop and hip-hop, they’re great. Pros and cons with this one, but while some people will love them, others will find them simultaneously too much and too little.