Synido is a fairly new company in the audio interface business. Their goal is to create a professional-level capture device at a beginner's level price point. In the last year they have released two audio controllers designed specifically for live streamers; the Voice 100 and the new Live 100.

With full control over EQ profiles, noise gate and allowing for multiple mics, instruments and PC/Phone inputs, the Live 100 attempts to pack everything into one controller. How well does it deliver on this hefty goal? Grab that coffee, kick back and check out our review of the Synido Live 100.

The Synido Live 100 is nothing if not unique. Most Audio controllers in this weight class attempt to do one thing; capture and output your audio to a PC or Mac. The Live 100 on the other hand attempts to create an entire audio production studio in a compact, if not slightly convoluted format.

The design and construction of the unit on the surface feel fairly premium with an aluminum body and hard plastic control knobs. Rubberized buttons compliment the build and give the whole unit a professional look and feel. Though I’m not personally a fan of the color choice of purple and orange for the brushed aluminum finish, I do like the choice to feature the exposed screw heads on the sides, the paint finish, and themed indicator lighting. 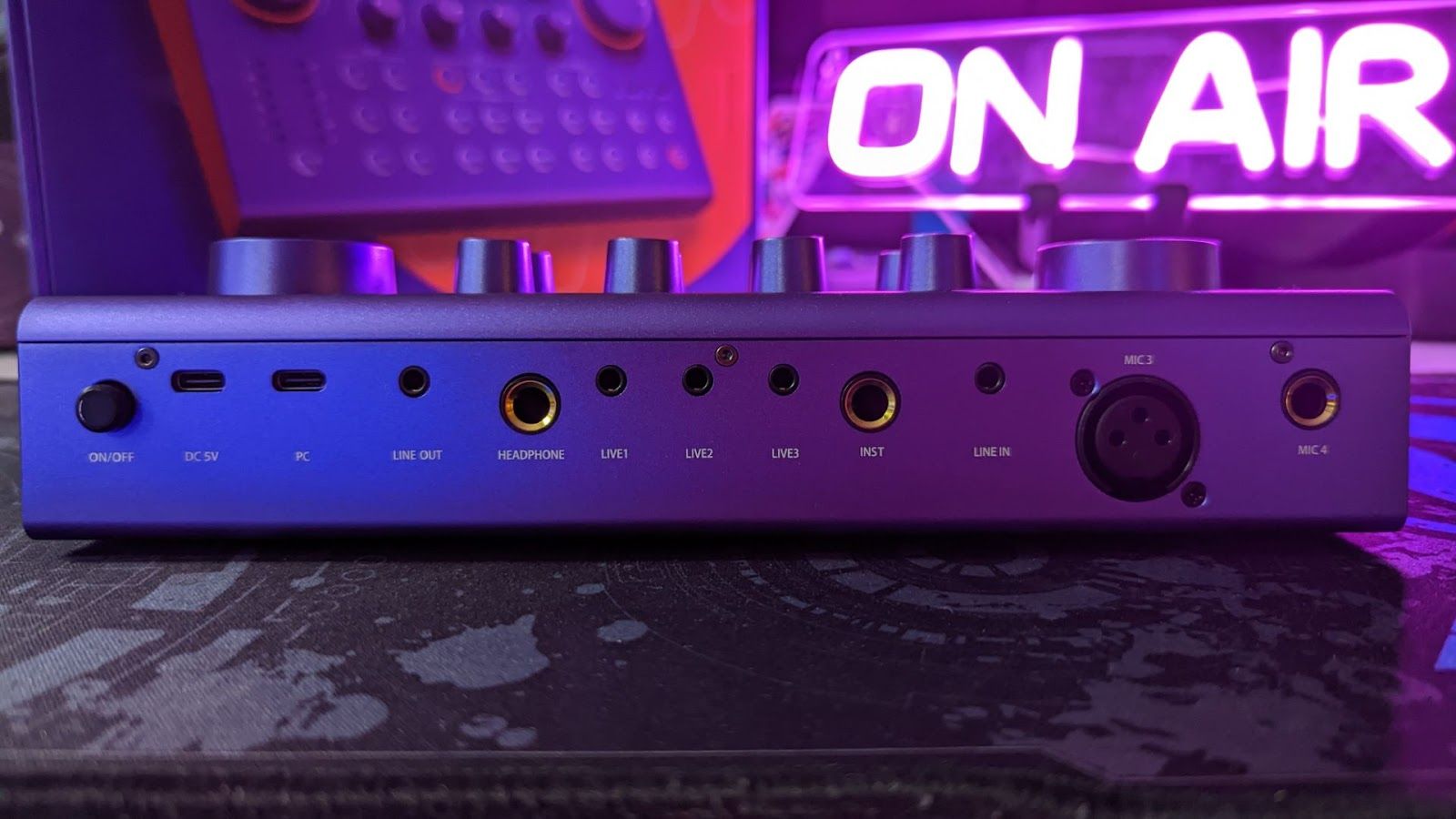 The various knobs feel sturdy to use and don’t wiggle when being used. However, I did note some lag when adjusting volume while monitoring. There is a delay when turning the knob which results in the volume actually jumping when being adjusted. It's a bit disappointing as it prevented me from creating smooth fade in and outs during testing.

The rubberized buttons, likewise, feel sturdy but do require a bit more force to activate. This was a bit of an issue while testing as more than once I would have to press the button more than once as I apparently wasn’t applying enough focused pressure on the switch. This resulted in missed cues and a couple of awkward seconds of silence while I mashed the button repeatedly until it registered.

The Synido Live 100 supports four microphone inputs though two are via an XLR to 3.5 adaptor cable, one is XLR and one is ¼ inch. The Live 100 also supports up to four additional 3.5mm inputs for such things as computers, phones, or tablets as well as one additional ¼-inch port for an instrument. There are two headphone jacks for monitoring with one supporting a headset with Microphone. Finally, two USB-C ports support connection to a PC/Mac/tablet that will also power the device. If you simply need power, you can use the second port and run it to a power USB power supply.

Moving from connections, the Live 100 is divided into sections along the face to help make it easier to control while streaming. Interestingly while there are a lot of features present, such as preset EQ profiles and BGM (Background Music) effects, some feel mislabeled or slightly confusing to understand what they do. For instance, in the case of the various volume controls, things like live volume and record volume don’t do what I expected them to do. There seems to be a bit of confusion with labeling and the user manual isn’t the most helpful for giving direction. 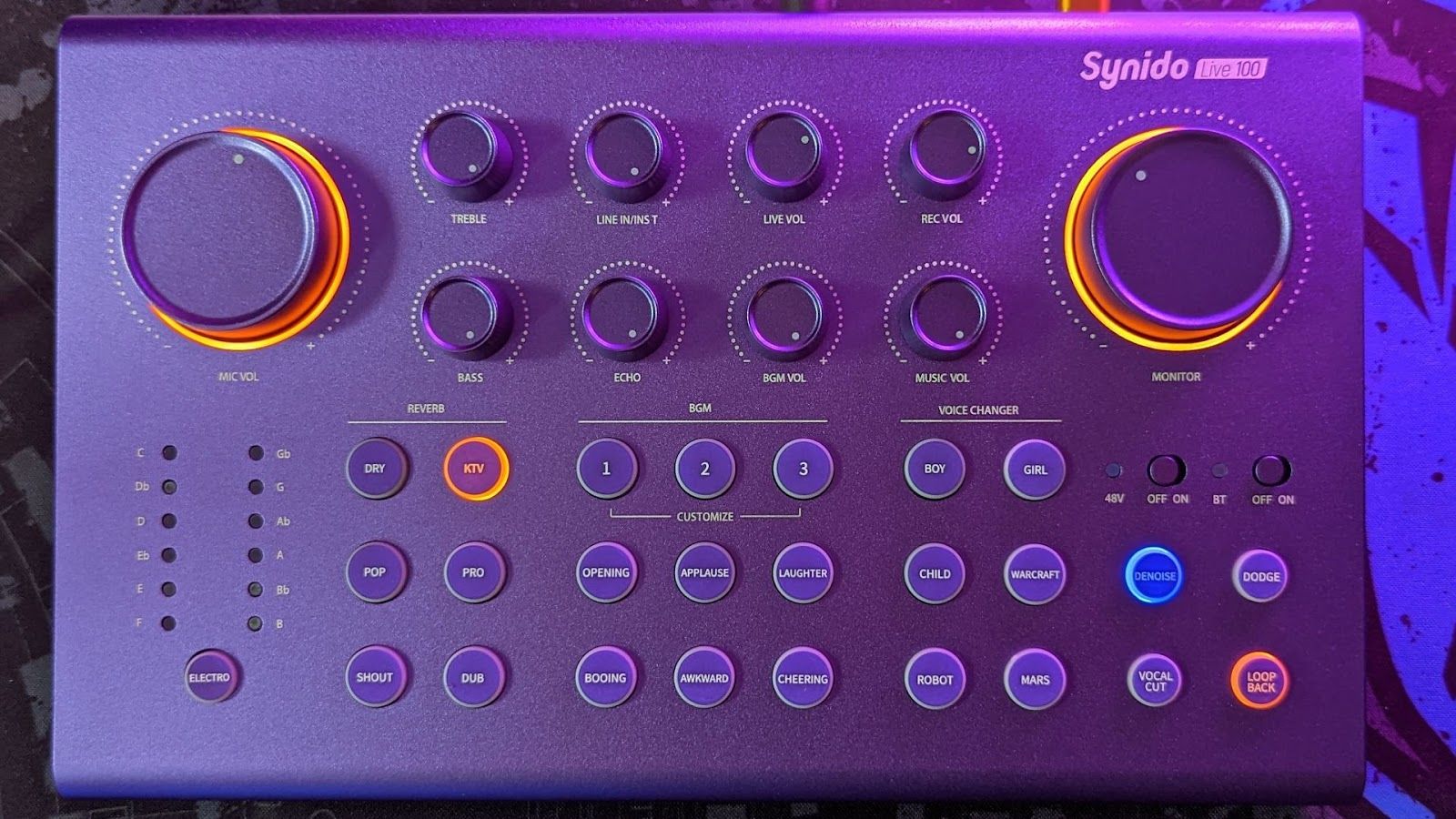 The design has a lot of great ideas but the execution of those ideas, things like the aforementioned volume knobs and switches, prevent it from executing those ideas well. It's a bit disappointing as some elements of the design such as the hard aluminum casing, hard plastic knobs, and rubberized buttons make the Live 100 feel like a premium device.

Some Great Ideas That Struggle To Deliver

The Synido Live 100 aims to be the all-in-one solution for streamers. Included features like built-in controllable noise gates, audio dodge function, and even echo and EQ profiles offer some great options for streamers. The aforementioned four included mic inputs as well as an additional ¼ port for instruments is a big step up at the Live 100’s 199.99 price range.

All of this should offer some amazing customization and options for streamers, and to a degree it does. Things like Bluetooth allow you to stream music to the Live 100 while the built-in dodge function automatically lowers the music volume when it recognizes that a mic input is in use. I was actually quite impressed at how well the dodge worked. It had no problem picking up mic input and automatically adjusting the music volume appropriately.

The built-in noise gate offers four progressively more aggressive levels of gating from off to full noise gate control. A quick switch of the button adjusts this on the fly. It works fairly well too, even with a cheap condenser mic I had laying around it did a fairly good job cleaning up the audio. However, it also seems to distort my vocals slightly. I did have better success with a more expensive Dynamic microphone but even with the assistance of built-in gating and adjustable gain on the side of the mic, the noise gate still managed to distort the vocals more than I would have liked.

As mentioned, having the four mic inputs with phantom power is a pretty amazing feature. However, having them use different input methods is both a blessing and a curse. On the one hand, it allows for a wide range of mics to be used. This is great for those scraping together any gear they can get to put together a podcast or stream. The preamps aren’t overly impressive but functionally get the job done if you have a decent mic to work with.

The downside to this is the lack of consistency in audio quality. Using XLR to 3.5mm conversion cables will produce a different sound than a straight XLR cable. The same is true for XLR to ¼-inch cables. Additionally, you then have to be conscious of balance vs unbalanced cables when finding the right cables. For a streamer or podcaster starting out, this feels like an extra layer of convolution. 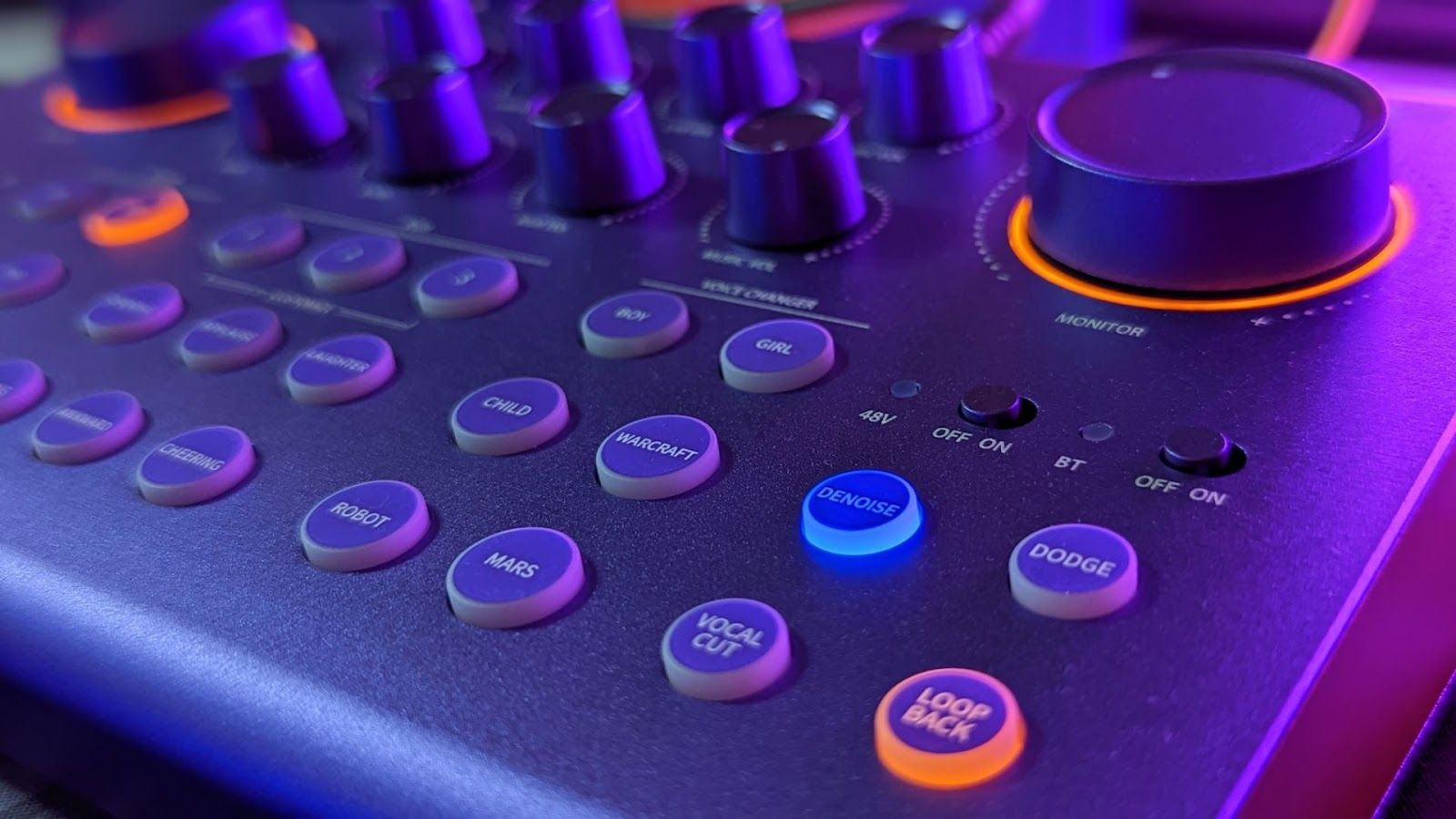 The other issue I ran into when using multiple microphones was that there is only one microphone volume control for all four microphones. This renders the mix useless if you don’t have four people with exactly the same microphones and volume levels when they speak. This results in a final mix that isn’t balanced or EQ’d well.

Things like PCs and phones that are plugged into the additional line in ports have one volume control which leaves you mixing multiple sources from the individual devices, not the audio controller. This can get pretty complicated when trying to leverage the whole device. In some ways having so many ports ends up being overwhelming because there is so little direct control from the Audio controller to manage it all. This goes against the principle purpose of the Live 100, to create an all-in-one interface for a streamer or podcaster.

Another concern that I noted has to do with recording to a PC or Mac. I ran the Live 100 into both OBS and Reaper and wasn’t able to separate the various audio channels. This means that it’s impossible to record individual channels and EQ in post making it fairly difficult to use for a recorded podcast. It seems odd considering some of the promotional material is aimed at podcasters.

There are some additional features that offer some fun additions to the Live 100. The inclusion of the BGM system offers a nice quality of life to the interface. Pre-programmed effects like a laugh track, applause, and cheer allow for some fun additions to your live stream. Three programable BGM buttons are also present allowing you to capture your own tracks to use.

There is a section called reverb that essentially is a series of six eq profiles to apply to your voice. While there is no real customizable EQ available the presets did offer a decent array of EQ profiles to work with. I should qualify that statement by noting that there are bass and treble knobs but once again they impact the whole mic mix and cannot be isolated to one channel.

Additionally, there is a voice changer module with six distinct voice modifiers to choose from. All of these are fun additions but nothing that really raises the overall quality of life for the Live 100. It would have been nice to see some of these additional features swapped out for better control and function of the unit itself. There are so many potentially great things about the Live 100 but it fails to really succeed well at any one of them. 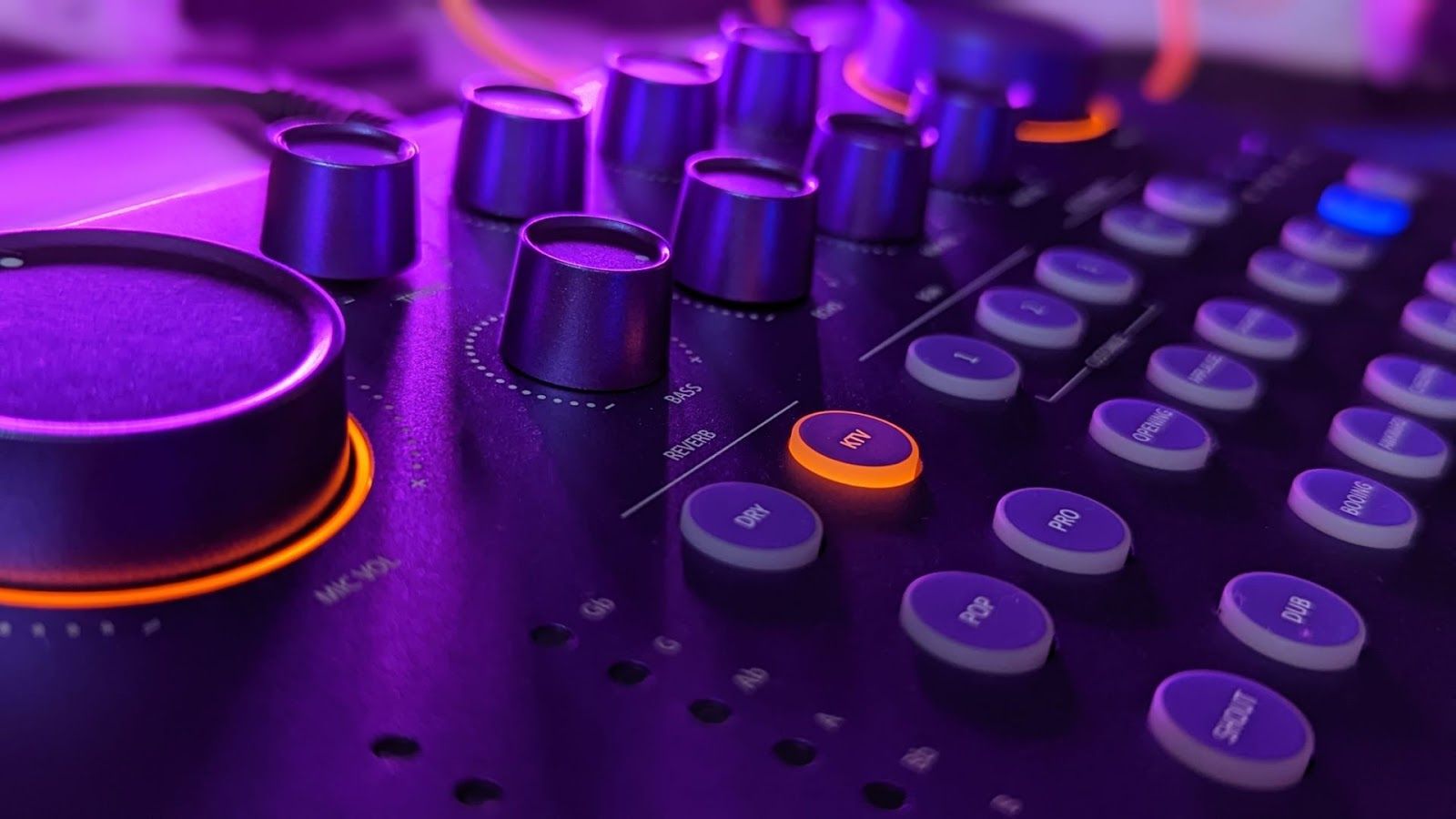 The concept of the Synido Live 100 is something I was excited about. The idea of a pro-level audio interface at a more reasonable price with four microphone inputs is something to get excited about. However, there is something to be said about trying to do everything. If Synido had focused more on implementing a couple of its great ideas instead of attempting to implement them all The Live 100 would have been better for it. Unfortunately, none of the ideas work well enough to recommend it.

Some gimmicky features, issues with volume (and channel) control, buttons that don’t engage properly and lacklustre preamps, just to name a few concerns, keep the Live 100 from really breaking new ground. In fact with the host of issues I’ve run into it's not even one that can compete with some of the easier-to-use and simpler-to-run audio controllers out there. Priced at $119.95 USD it's just too much for too little.