As a game journalist, interviews and travel is the name of the game. More than once I’ve found myself lugging gear from country to country, working again on refining and simplifying my set up. One of the biggest struggles is making sure I have what I need for interviews and on the fly voice-over while covering press events. Most of my recording gear requires a lot of set up, serious accessories, and way more room in my carry-on then I’m willing to give. Enter the Samson Satellite Broadcast Mic. It’s one of the most compact, versatile mics I’ve ever worked with and one taking a closer look at if you need a mic to take on-the-go. 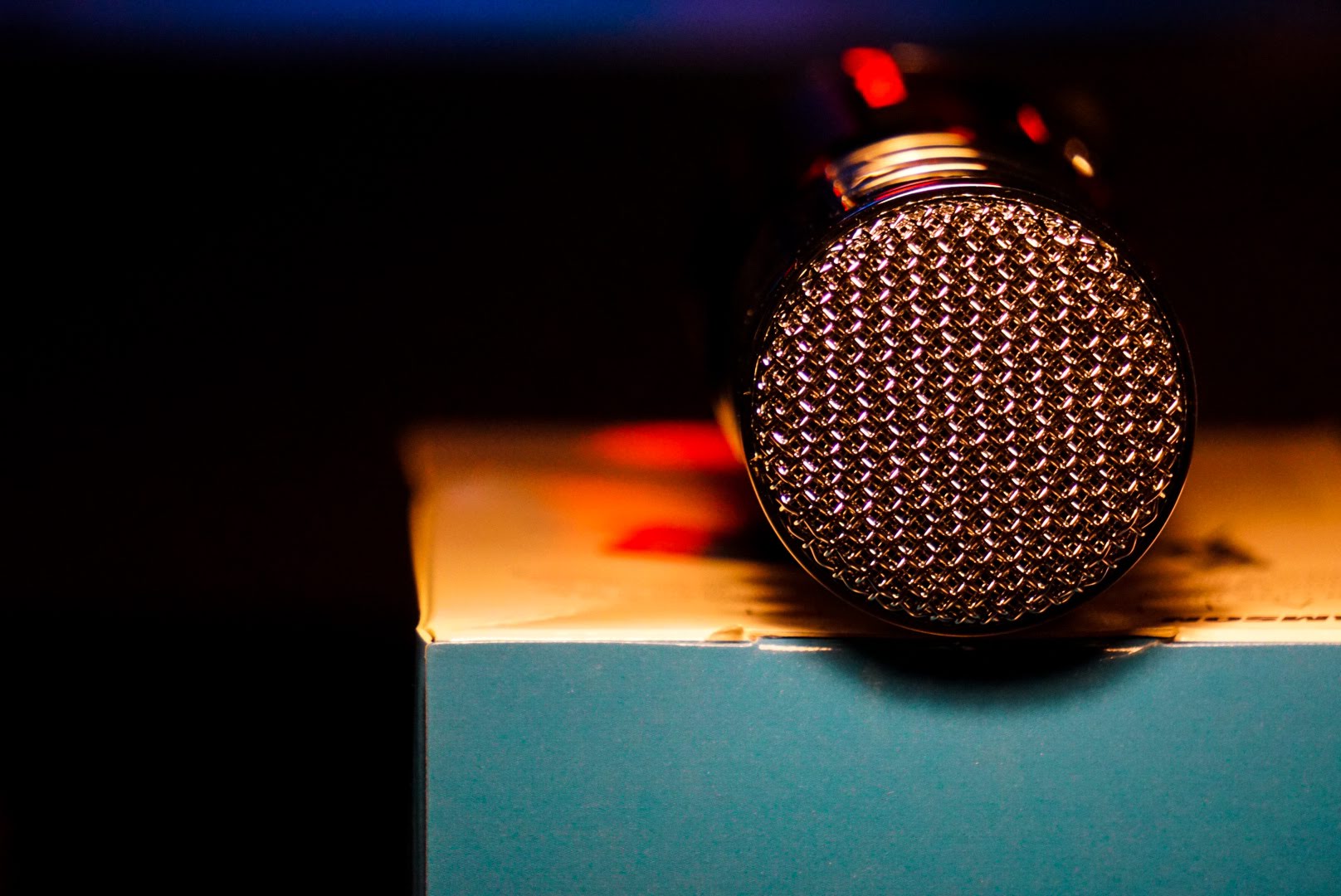 Condenser and Dynamic: What does it all mean?

The Samson Satellite is, at its core, a solid condenser microphone. For those new to microphones, there are two basic types, dynamic and condenser. The short version is that condensers are the ideal mic for studio settings as they have excel at picking up a wide frequency range. If you’re a streamer, they can be especially great if you like keeping your mic out of frame.

The flip side of this is that they can pick up all of the sounds in your space. Typically, a good condenser is going to require setting up your room, really dialing in settings, or some fun work in post to get the best possible result. The plus is that there is some great recording software (free and paid) that can help with that.

By contrast, dynamic mics are designed with a very limited pickup range. This is great for clean, crisp vocal recordings but requires close proximity and generally a more robust set up (e.g. audio interface, XLR cables, sometimes phantom power) to get up and running. Although this can be great for long term stationary recording sessions it can also mean a much more cumbersome arrangement.

If, like me, you find yourself needing a more flexible, portable mic set up then I would like to introduce you to my good friend, the Samson Satellite Broadcast Mic. Its sleek, portable, and exceptionally user-friendly. 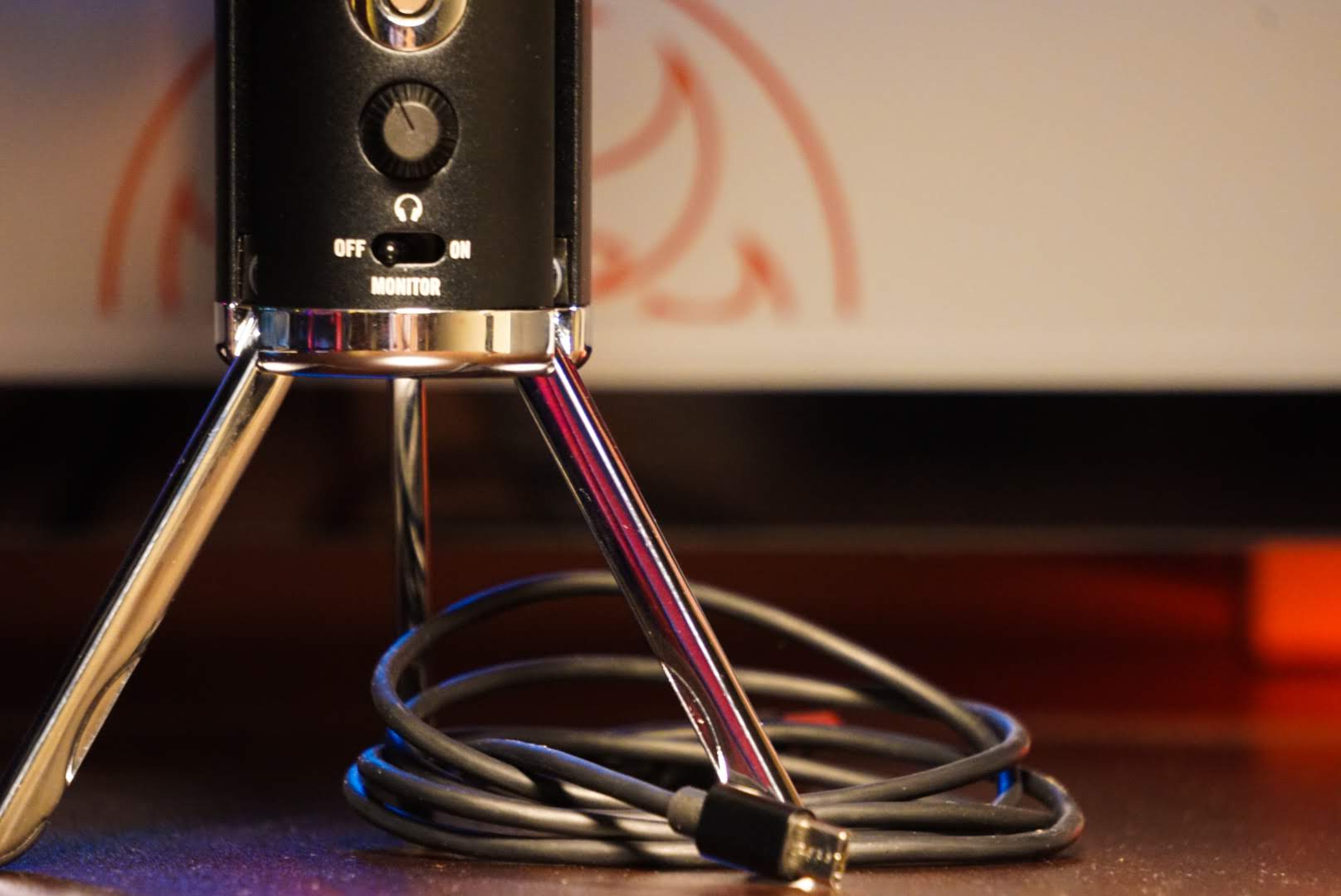 A Mic for Every Situation

Samson had one focus in mind when creating the Satellite; mobile broadcast. From the ground up the Satellite is built to adapt to situations on the fly. With three polar patterns (the direction in which the mic captures sound waves) the Samson can easily work as a cardioid (one focused direction) mic for podcasting, a bi-directional (two distinct and opposite directions) for interviews or as an omnidirectional (360 directional capture) mic for group table talks. This three-in-one build makes it ideal for travel, portable setups and impromptu recording sessions.

The mic itself is has a sleek, clean design. The top of the mic is crested with a chrome grille while the bottom enclosure contrasts exceptionally well with a deep blue metal finish. Three small folding legs extend out from the sides to create a tripod for the mic to prop up on making it ideal for portable situations. The bottom of the mic also has a 5/8” threaded stand mount for those times when you do have a boom arm or mic stand handy.

The Satellite has some basic function controls right on the mic itself. A multicoloured LED indicates the state of the mic while directly below it is a three-point toggle switch that allows you to easily switch between the aforementioned polar modes. It should be noted that switching between the modes is instantaneous and requires no setting adjustments in the recording software for it to take effect. A mute button is also accessible from the same location allowing for quick muting if needed.

Finally, below all of these controls sits one of my personal favourite controls; the onboard monitoring volume and switch for direct monitoring. As an audio editor, this is absolutely one of the best features of the Samson mic. If offers real-time monitoring through the mic via a 1/8” headphone hack on the backside of the mic. Being able to hear exactly what the mic does is an incredible bonus, especially when setting up for interviews, as it cuts down on setup time.

Finally, the Samson Satellite comes with both a micro USB to USB cable for computer input as well as a micro USB to lightning adaptor for iOS device input (sorry android users). It should be noted that both are plug and play. The latter is a seriously welcome feature for me as it means not having to lug a laptop to events. Instead, I can walk in armed with an iPhone or iPad making my kit that much smaller and easy to pack. With the aforementioned plug and play access, you can be recording on your phone in literal seconds. This Mic is really built to be a jack of all trades. 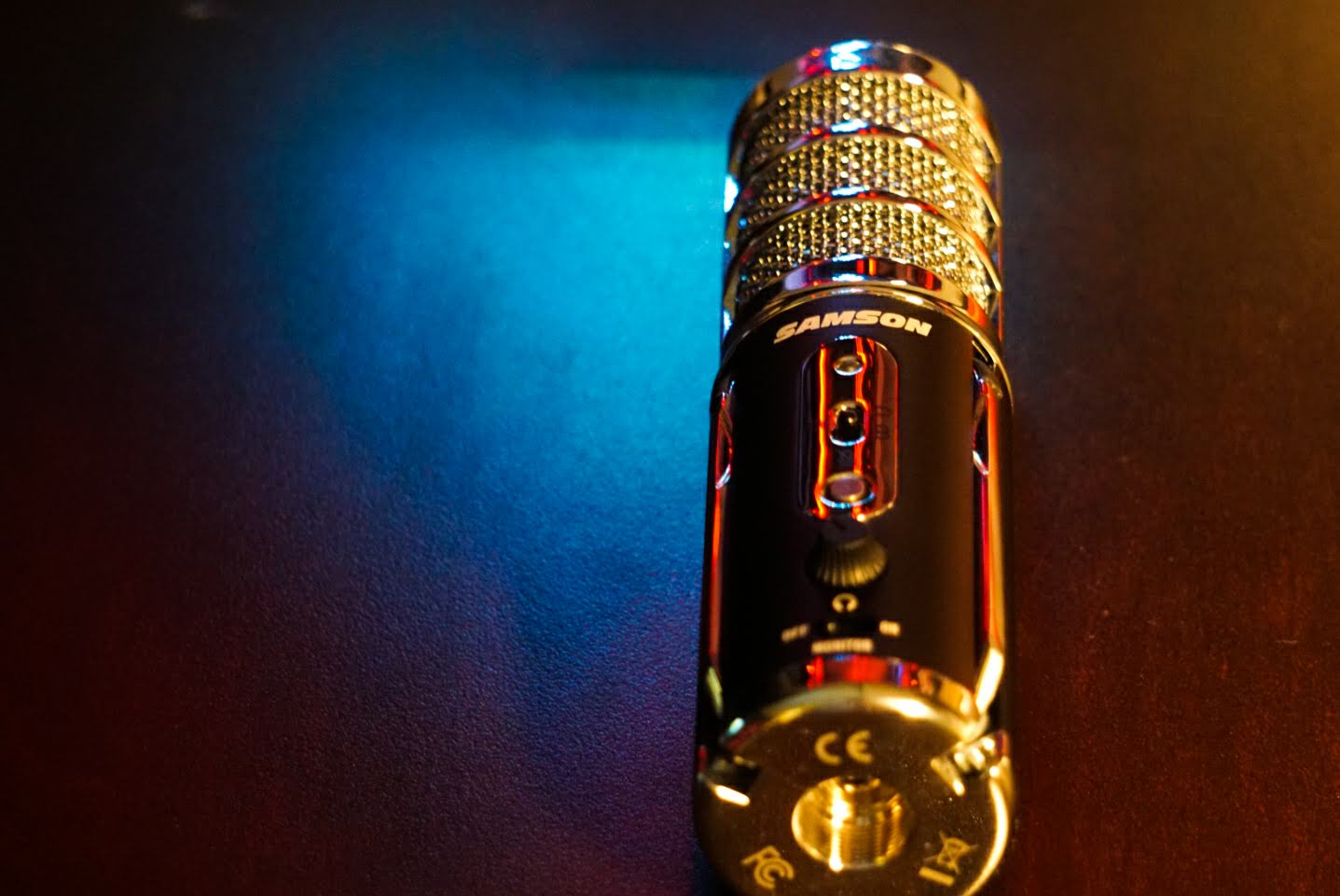 Can You Hear Me Now?

As mentioned, the Samson Satellite is a seriously versatile mic designed to get you up and running fast. With two high quality 16 mm condenser capsules at its core, the Satellite is capable of capturing both vocal tone and clarity exceptionally well. During the cardioid testing, I noted that the mic was quite capable of capturing the full range of my voice with distinct clarity.

This is impressive considering that my voice tends to garble the low-end of the frequency band. This essentially makes my voice sound muddled when recording. With the Satellite, I found the low end to be quite clean and crisp without a lot of work in post.

This, of course, does have some drawbacks. Although the audio you intend to capture comes in clear and clean, so does every other sound in the recording space. In the case Cardioid test, this was easily offset by pulling the gain back in the capture software. It does require closer proximity to the mic but offers a nice balance of clean audio without all the noise. It worked fairly well even in a room with PC fans, mechanical keyboards and the sound of foot traffic overhead pouring into the room.

Adjusting gain in bidirectional mode will generally achieve the same positive results but it does get much more difficult in the case of the Omnidirectional setting. This is where the environment becomes increasingly important. This is the reality of working with any condenser and in the case of the Satellite, it actually handled the space much better than most condenser mics I’ve worked with. 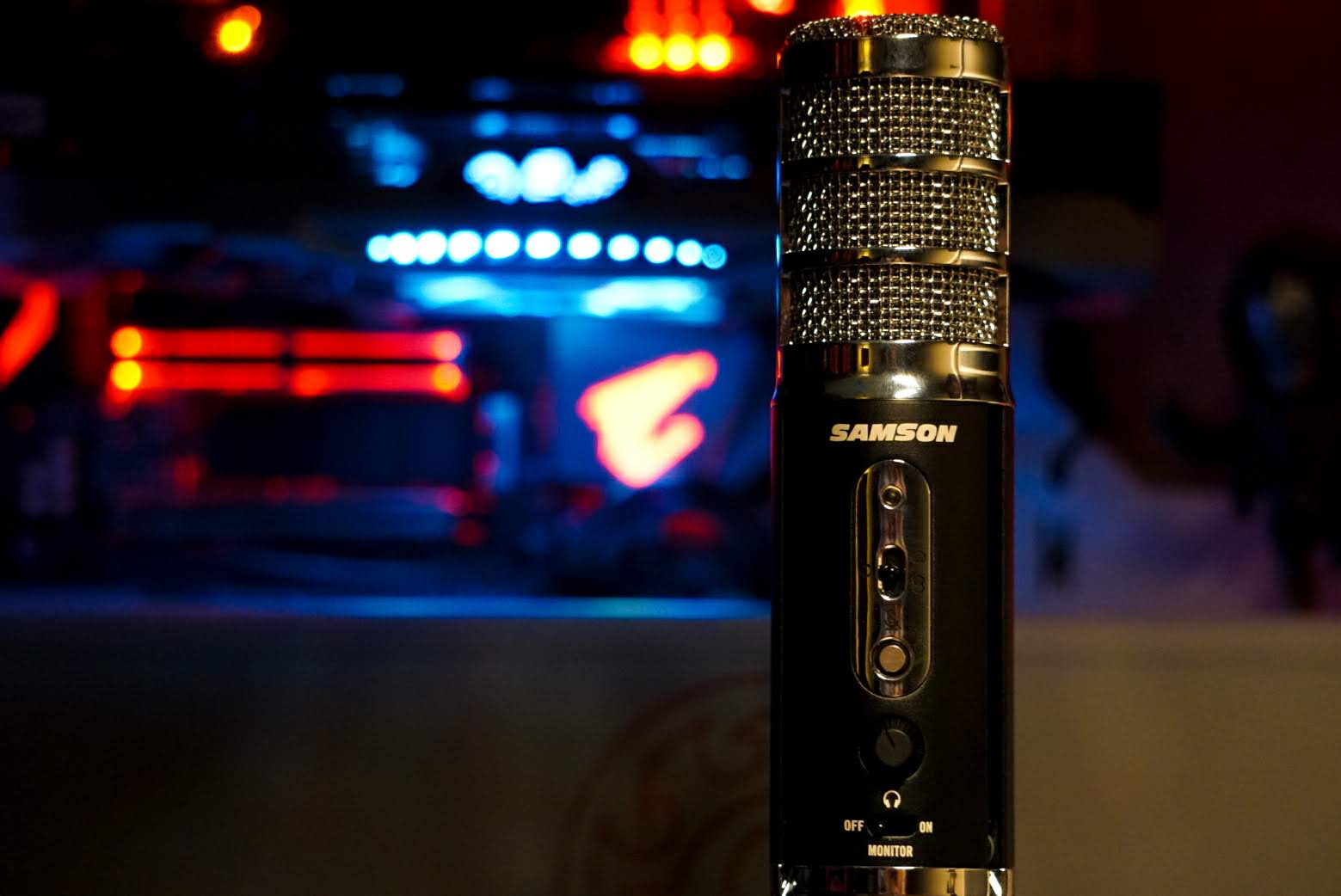 Another impressive feature of the Satellite is the built-in shock mount that absorbs quite a bit of noise generated from handling and table rumble. According to Samsontech.com, the shock mount works to isolate the condenser capsules from the body thus eliminating much of the accidental noise generated from moving the mic. During testing, we took turns shaking the table, bumping the mic and at one point, while the mic was suspended from a boom arm, kicked the arms base. The Samson handled it like a champ.

The Samson’s built-in monitoring is another feature that really boosts up the mics value for quick set up and go type settings. The monitoring is done in real-time with no noticeable latency effects. In layman terms, there was no delay between what was being recorded and what I was hearing in the monitor. This is exceptionally helpful when in group or noisy settings as it allowed for quick soundchecks without the need to review captures.

The Samson Satellite is a great mic to have in a travel kit but also as an all in one mic for podcasters, streamers and content creators. The sheer versatility of it, from the different polar patterns, rich condenser capsules, built-in shock mount, direct monitoring, and ease of use make it a great offering for those looking for a flexible audio piece for their creation kit. If you’re in the market for a flexible USB condenser microphone and can’t spend more than a hundred dollars, the Samson Satellite will offers great bang for the buck.