I have a question for the content creators and steamers out there:

Have you ever wished your input device could do more than input? Have you ever wished for more control and deeper customization? Have you ever wanted to create content in a different location than your typical set up? If you have had any combination of those thoughts, chances are, the options and costs have been prohibitive, to say the least… and that doesn’t even cover the idea of shooting on location.

In an era where the mantra of “work smarter, not harder” is realized by advancements in technology, pro audio and video juggernaut Roland wants to unshackle your ideas and hand over more creative control with the V-02HD Mk II Streaming Video Mixer.

Let’s see if this video mixer is the missing piece to your content creation arsenal.

If you are not familiar with the brand, Roland has a legacy of innovation within the production space. From providing audio and video solutions for concert halls and houses of worship to creating some of the most iconic synthesizers and drum machines, Roland has been in the game since the 1970s. Out of this expertise, Roland Professional A/V released the V-02HD Mk II - a multi-format, multi-input video mixer to provide powerful, professional video production potential within a small form factor.

Equipped with two HDMI inputs capable of capturing up a 1080p60 signal and two HDMI outputs to match, the V-02HD Mk II is so much more than a video interface. Connected via USB 3.0 Type-C, the V-02HD Mk II serves as a low latency desktop console for controlling your content creation as you are creating it. And, that, is exactly the way Roland likes it: technology that enhances the creative process and frees creators up to create. 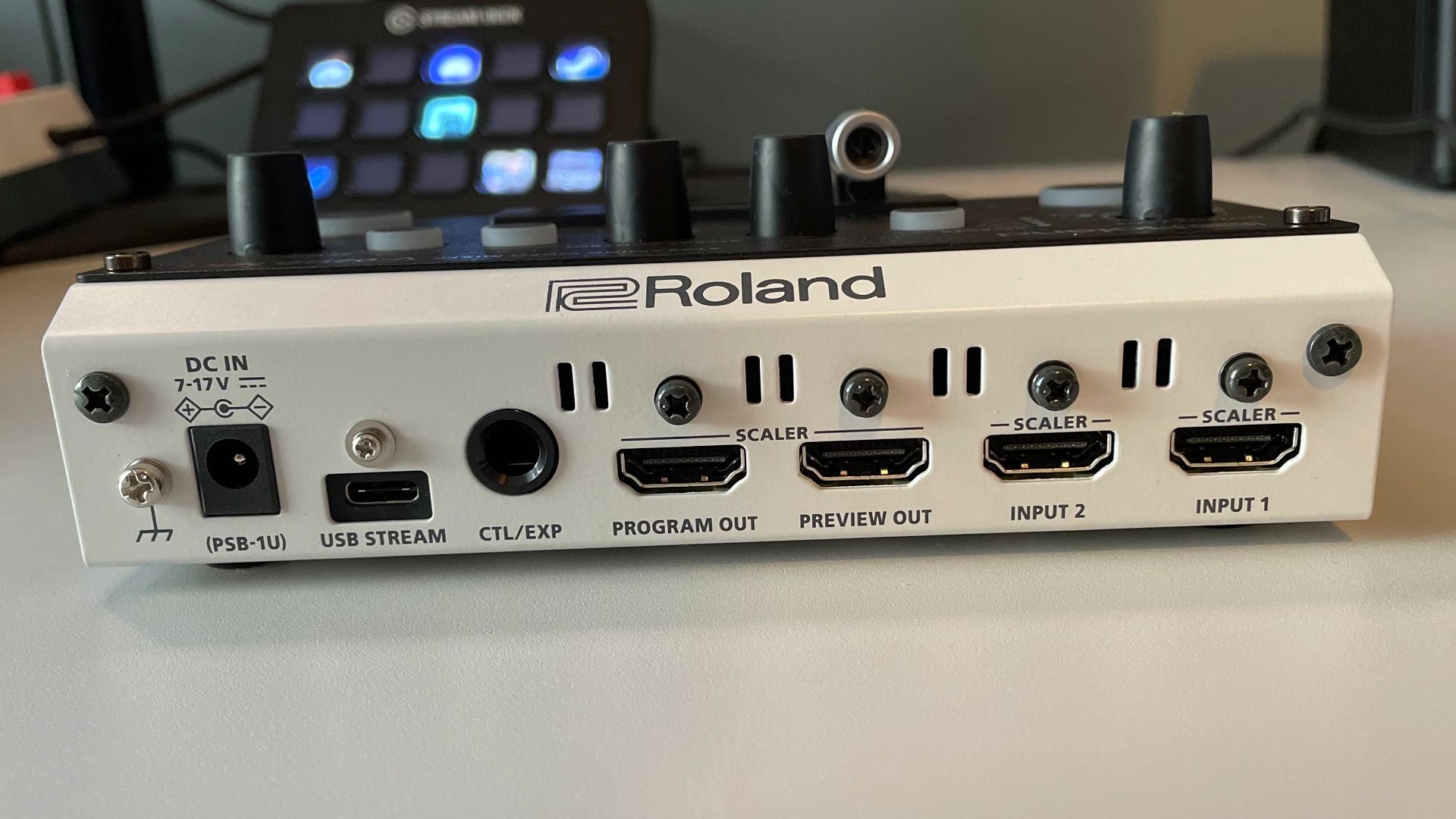 To achieve this lofty goal, the V-02HD Mk II has a number of built-in features to assist creators… and the layers go DEEP. Beginning with video effects, the V-02HD Mk II has four main built-in effects with layers of control. On the surface, it has transitions to mix signals sources or wipe in between, a customizable Picture-in-Picture mode, a powerful keyer, but there is also a full menu of visual effects. From censor blocks to colorization, the V-02 HD Mk II takes these options which might otherwise use valuable system resources to assist in making the picture you are capturing the best it can be.

And, that’s just the video. Roland leverages its experience in the pro audio space by including two audio inputs alongside a myriad of audio effects such as limiters, compression, de-essers, and reverb per channel. Did I also mention the V-02HD Mk II can store up to 8 system presets for on-the-fly adjustments? Oh yeah, it can utilize a footswitch (sold separately) to control the unit as well. 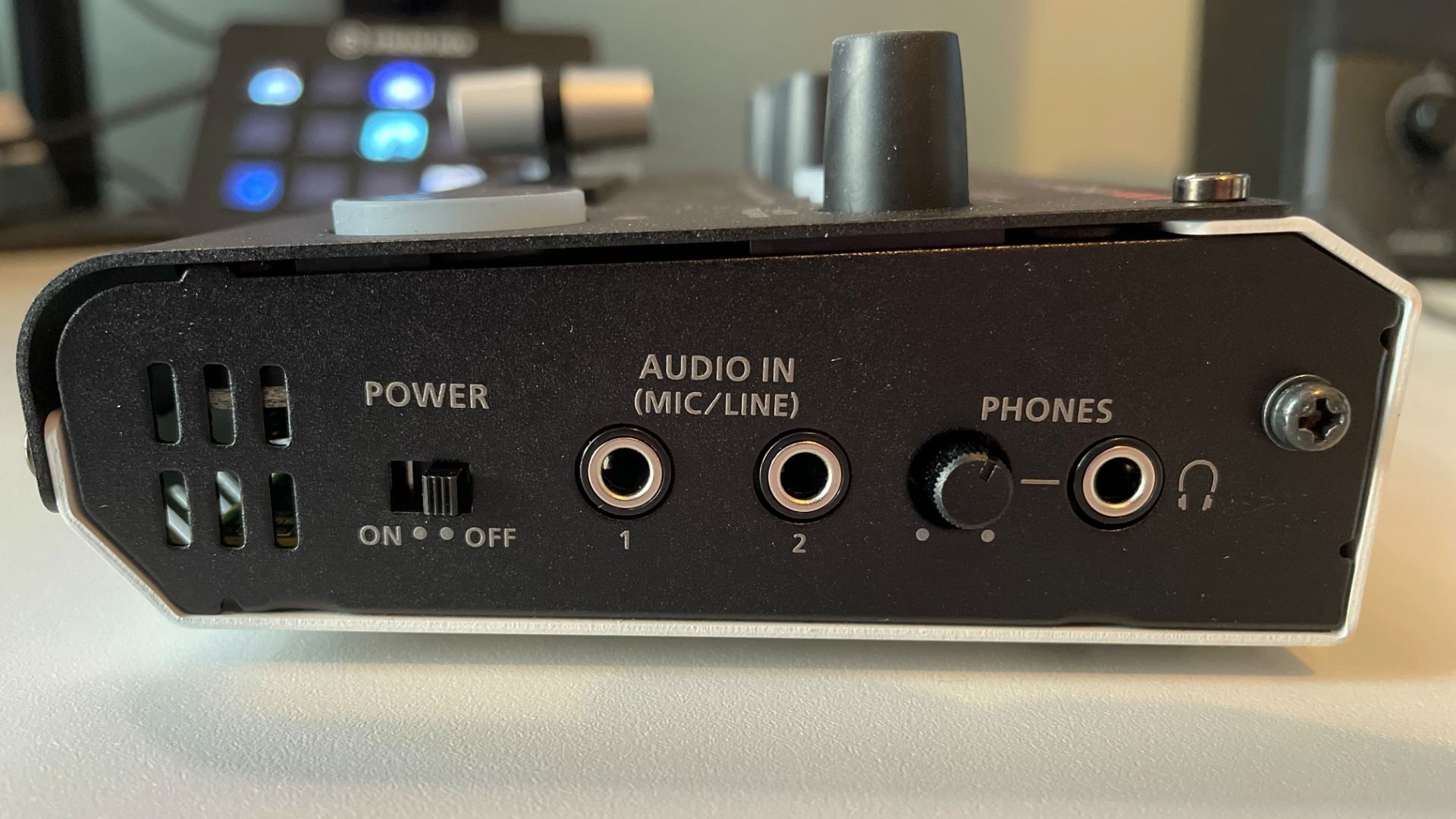 If that wasn’t enough, enter AeroCaster Switcher: Roland’s solution to add even more cameras into the mix. Utilizing one of the unit’s HDMI inputs, this powerful iOS app can connect up to four iPhones via WiFi to the V-02HD Mk II, increasing its potential for video capture. Within AeroCaster Switcher, users can create templates for how video sources work together, preview what a video source is doing when it is not live, and much, much more.

While we have only scratched the surface of what the V-02HD Mk II is and what it can do, let’s take a minute to talk about the experience of using it.

Setting up and Streaming with the V-02HD Mk. II

Out of the box, the setup for the Roland V-02HD Mk II was a bit interesting. And, by interesting, I mean it took me longer than it should have to ensure the device was performing properly. The one crucial piece of gear necessary for its proper operation was not in the box with it: a USB 3.0 cable. Fortunately, after testing a number of USB Type-C cables, I found one in my stash that was rated for SuperSpeed. After that, the rest was, from a signal chain standpoint, pretty straightforward.

Before doing anything else, I wanted to explore the system menu to see how each adjustment worked. Navigating the menu system is very simple once I had a monitor hooked up to the preview output; by utilizing a single knob, you can select and edit the settings to meet your needs. I did discover late on that this could be done through an iOS app as well. The user interface is a touch more up-to-date and user-friendly on the app, but it is not terribly unwieldy to dig through the menus. And then, I just had to go hands-free.

As a novice musician, I happened to have in my collection of gear a Boss FS-5U expression pedal - one of the footswitches that is confirmed to work with the V-02HD Mk II. Getting that to work correctly required a bit of digging into Roland’s knowledge base and by scouring YouTube tutorials, but once I had it working, the option to switch inputs on the fly was wonderfully freeing!

With a few hours of tinkering and some creative connections run, I took to Twitch to see how it would work. Largely, the V-02HD Mk II worked as intended. I had to change a few of my templates in Streamlabs to make it work, but it was not a terrible experience! There was no noticeable capture latency from my camera or Nintendo Switch to the software, but I could have chosen a better title to play; the Picture-in-Picture mode couldn’t account for text boxes on the screen or items that needed to be interacted with. That, however, is more “user error” than an issue with the device! 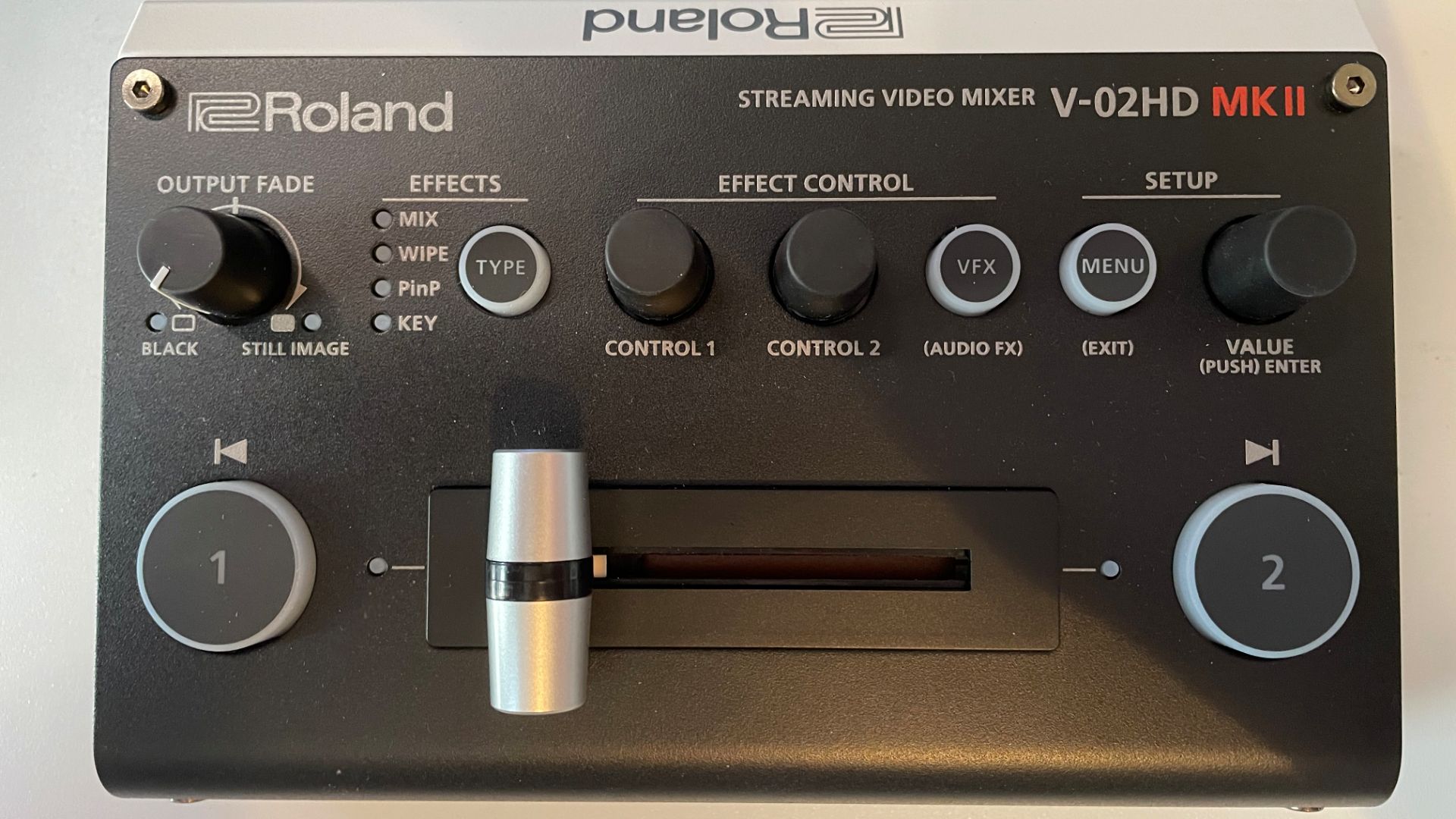 The V-02HD Mk II from Roland Profession A/V is a powerhouse of a content creation device that offers a ton of control for multi-input capture. With a variety of effects and tweakable options to improve the captured signal, it is a Swiss Army knife for video production. All of this does, however, come at a premium price, with a learning curve, and with some limitations.

While the current landscape for streaming is locked in at 1080p60, many of the V-02HD Mk II’s competitors offer passthrough options for HDR, 4K, and higher refresh rates. The absence of these in an ever-moving technological landscape could be a deterrent if you are looking at future-proofing your content creation kit. Hopefully, we will see these options in future iterations of the V-02 lineup or that Roland will take what it has learned within this generation to build onto the next.

So, the big question comes down to this: who is the Roland V-02HD Mk II for, and is it worth it? Let’s start off by talking about the price.

Coming in at $395, the V-02HD Mk. II is quite a few pennies more than its competition, if we are comparing it dollar-to-dollar with something like the Elgato HD60. However, when you throw in the layers of control, the options for multiple input, and the on-board effects, the scales start to tip in favor of the V-02HD Mk II. While many of the on-board transitions and effects on the V-02HD Mk II can be programmed into most modern broadcast software, the option to free up system resources is always a nice one.

So, who is this for? The Roland V-02HD Mk II is for the content creator looking for a device that can handle multiple FHD signals at once while maintaining a small footprint. It is the perfect pairing for capturing video from systems like the Nintendo Switch and for reducing the workload on your streaming PC. Combined with Roland’s AeroCaster Switcher app, the V-02HD Mk II opens up the possibilities of shooting on location with minimal gear, taking away the barriers between the conceptual and the actual.

For me, I can’t wait to see what possibilities have yet to be created with it!