The ROCCAT Kone XP Air Gaming Mouse is a highly adaptive mouse that offers 29 customizable inputs to cater to all of your gaming needs. Cut from the same cloth as the Kone XP, the Air offers a wireless option to the already impressive Kone XP gaming mouse. Having just finished testing out the Kone XP in our last review, I’ve been eager to see how well the wireless version fairs by comparison.

ROCCAT has been producing some solid gaming peripherals over the last few years and the Kone XP series has been one of their most creative and feature-heavy offerings to date. The Air promises superior ergonomic comfort, pro-level accuracy and precision and aims to take on the competition in the competitive gaming circuit. How well will the Kone XP Air actually fair though? Can it hit the mark? Grab that coffee, kick back and check out our review of the Kone XP Air provided to us by the good folks over at ROCCAT.

ROCCAT has never been afraid to venture out from the standard design when it comes to its gaming peripherals and the Kone XP Air is no exception. Leaning into that ergonomic design, the Air is one of the most comfortable mice I’ve ever used. Though I tend to find wider mice to fit my hand better, the Kone XP Air manages to create a comfortable experience for my hand that I don’t generally find in a slimmer mouse.

Button placement as well offers a lot of functional access for the index finger and thumb to leverage during gaming sessions. 10 programable buttons and a 4D scroll wheel mean you’ll have lots of options for input. Like its predecessor, the Kone XP Air offers 3D lighting effects in the form of five LED panels under a translucent shell. This is a slight variance from the Kone XP which had eight lighting zones available. Regardless it does offer some unique lighting options for the RGB enthusiasts out there.

The scroll wheel, also illuminated, is rubberized and offers what ROCCAT describes as a 4D input experience. Leveraging not only a vertical scroll but also a horizontal click, the scroll wheel gives you advanced input options to consider when configuring your layout. 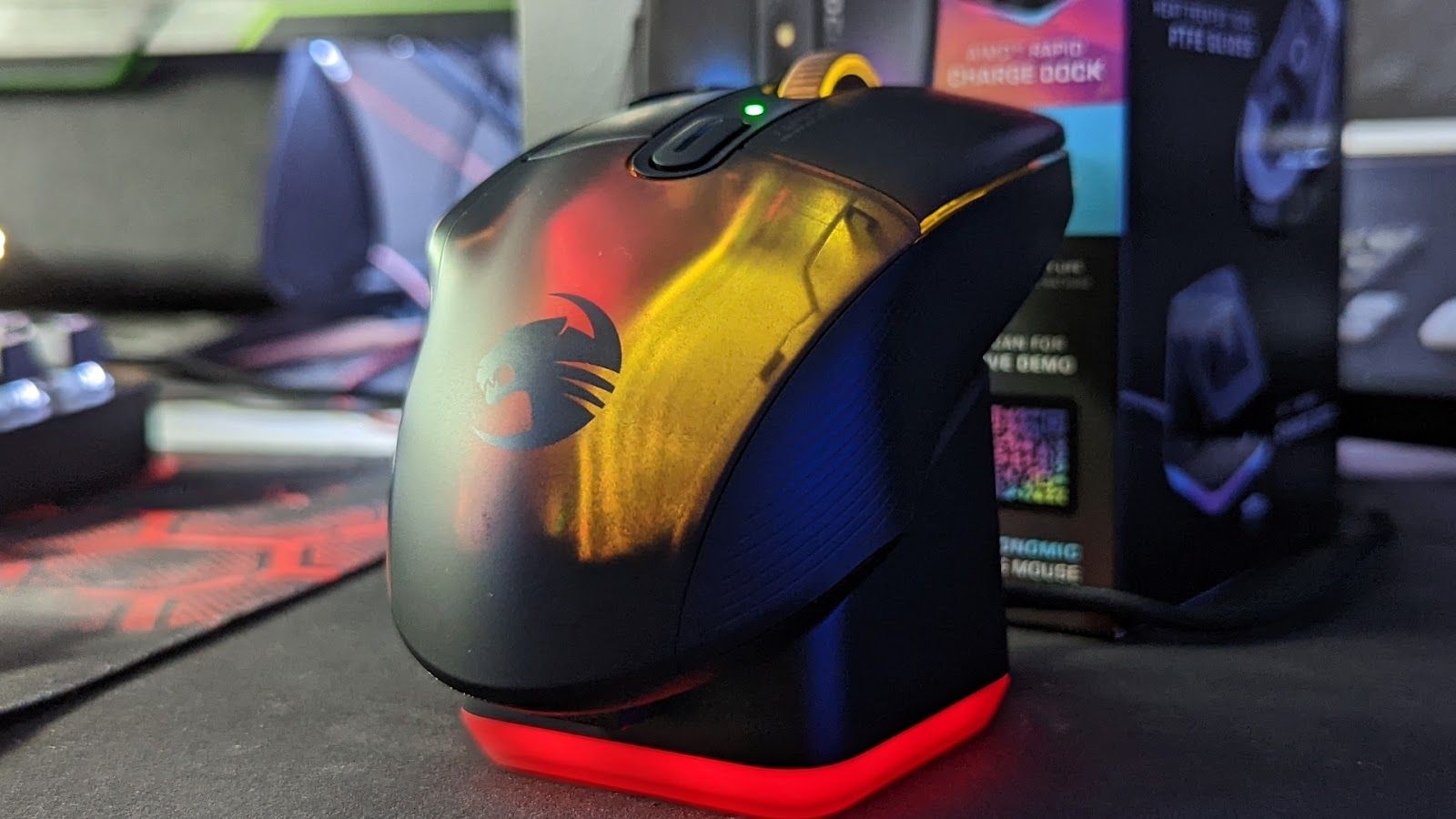 The Kone XP Air also comes with a quick charge station, PhantomFlex USB-C charging cable and USB-A dongle. The Mouse can be charged directly via the provided cable or from the charger itself. Communication is handled via the USB-C Cable, Bluetooth or USB-A WiFi dongle that can either be plugged into the computer directly or into the dock, thus freeing up a USB port on your system. The dock itself comes fully equipped with its own RGB lighting to work with which is a nice little aesthetic touch. When charging, the Air sits atop the charger at a 45-degree angle giving the whole kit a sleek, illuminated look.

It's a clean setup that looks great on the desk. The mouse is comprised of hard plastic with PTFE (Polytetrafluoroethylene) gliders on the bottom of the mouse. PTFE is a special plastic known for its non-stick properties. When applied to a glider it creates a low friction glider that increases the smoothness at which the mouse moves across a surface.

The mouse contains Titan Switch Optical switches specifically designed by ROCCAT to give a tactical response but with an optical response time. In essence, you’ll get the responsive feel you want while producing light-speed input results. The Air also houses a ROCCAT Owl-Eye 19K DPI sensor that allows for a huge range of DPI speeds for users to choose from. As previously stated, the Kone XP Air is here to challenge the competition in the competitive gaming space and it isn’t messing around. ROCCAT holds nothing back when it comes to performance on the Kone XP Air.

As stated, the Kone XP Air is built for performance. In my testing I found both the Titan Optical Switches and the Owl-Eye sensor to perform exceptionally well. I didn’t note any input lag while running the mouse wirelessly either. I really enjoy the tactile response of the mouse clicks on the Air. While I’ve not been able to fully test the 100 million click life cycle (I’m clicking it as fast as I can) I will say that the Air had no problem keeping up with my excessive clicking while gaming. 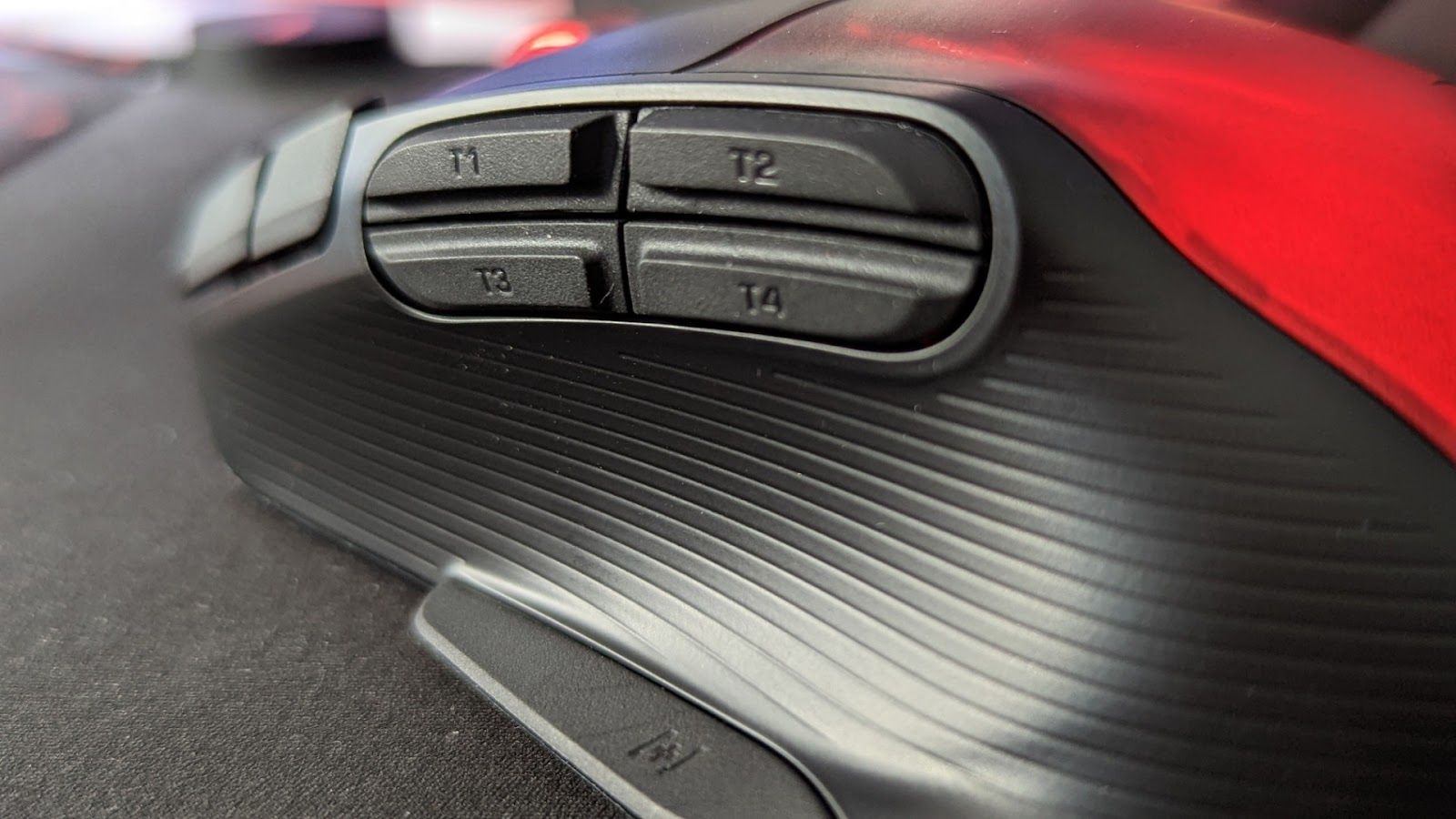 While the Titan Optical Switches are impressive, what impressed me more was how smooth the Owl-Eye sensor is. I actually tested it on my MacBook Pro (note that the Kone XP Air isn’t designed for Mac but I did it for science). I’ve generally run any mouse I review on the Mac simply to see how they perform. Interestingly most gaming mice I run through this test struggle with movement smoothness on Mac. My guess is that because they do not have properly supported drivers in this environment they use Mac’s generic ones.

However, I was impressed to discover that, while not supported, the Owl-Eye sensor still managed to create a smooth mouse experience. I believe this is due to the Air’s onboard memory that stores locally any profiles you save to it. Back on PC, the mouse sensor performed wonderfully and felt responsive and perciese in my hand.

The Kone XP Air also includes ROCCAT’s trademarked Easy-Shift duplicator technology. The Easy-Shift technology allows you to have two active button profiles assigned to the mouse at once. Holding down the assigned Easy-Shift key flips the mouse to the second profile allowing it to perform other tasks on the fly. Like the Kone XP, the Air handles this transition between profiles with ease and speed.

In gaming situations, I found it helpful to map functions like reload and my “E” function to the left and right mouse buttons. I was able to quickly perform those functions without ever taking my left hand off A, W, S and D or moving my index and middle finger of my right hand from their normal mouse buttons. In productivity or even media settings everything from cut, copy and paste to media control can be mapped to the mouse via Easy-Shift. 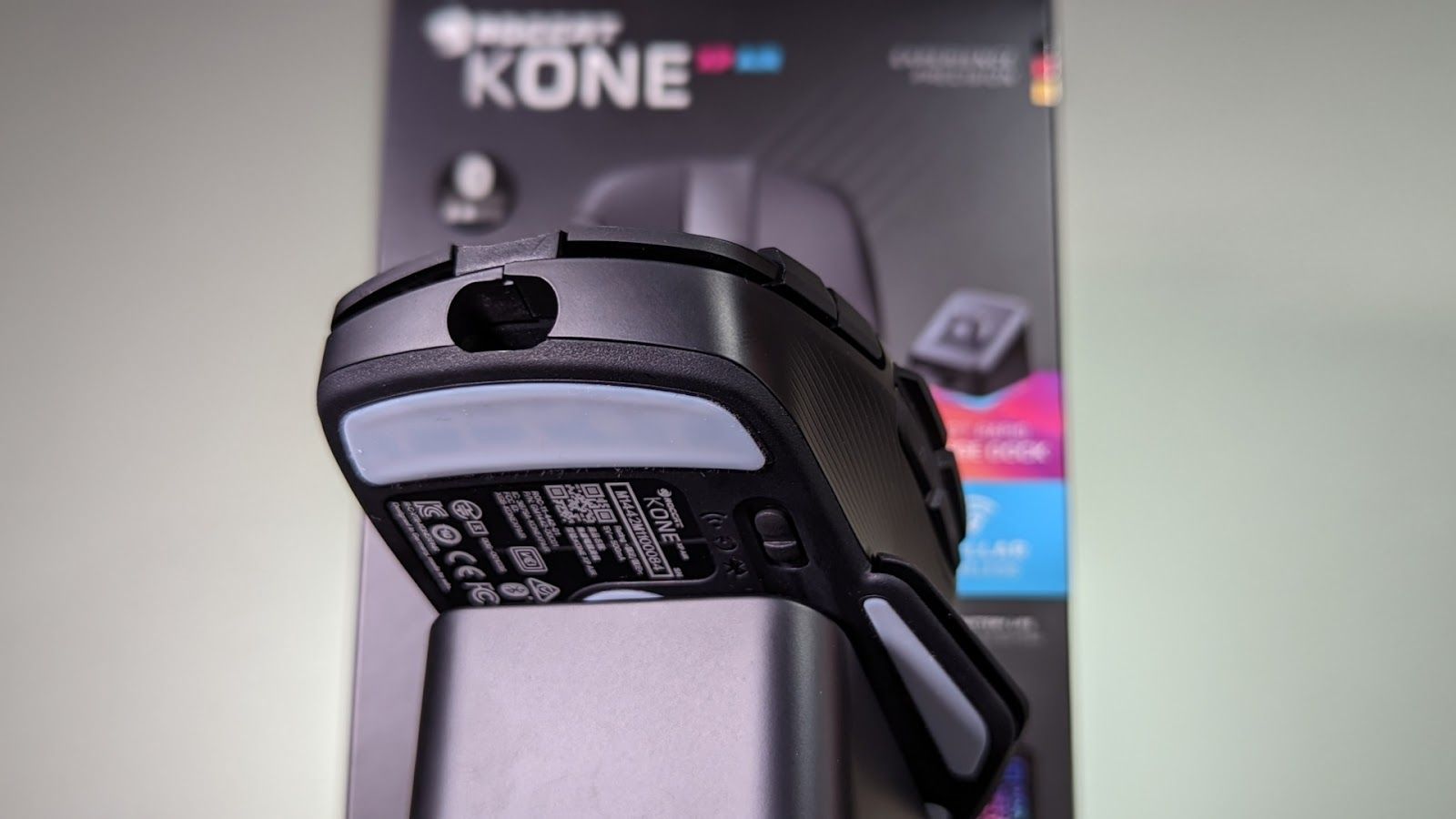 The only caveat with the Easy-Shift technology on the Air is that there is no great button to assign Easy-Shift to. The most reasonable location is found in the button that naturally rests under your thumb and while it is convenient it also means losing easy access to the four other buttons on the side of the mouse. This still does offer a lot of additional functionality but doesn’t allow you to fully leverage all of the buttons in your second profile. It's a bit of a disappointment considering how well the technology itself performs and responds.

The final note on performance is in regards to the quick charger dock that comes with the Air. I ran some basic charging tests and found them to be in line with the 10-minute charge equates to about 5 hours of charge. This wasn’t an exact measurement as the charge is represented in percentage but using the power of math I was able to convert the percentage to time. The mouse charged 5% in the 10 minutes I had it on the charger. According to my math, that equals roughly five hours of use. As mentioned earlier you can also charge the mouse via the USB-C cable in case you do find yourself forgetting to place the Air on the dock.

A Complex and Complete Software Solution

ROCCAT’s in-house software, SWARM, is an all-in-one package that manages all aspects of the Kone XP Air experience. There are a host of customizable features included with the Air. Everything from scroll speeds to DPI settings can be found here. Button assignments and illumination are also programmed and sent over to the mouse’s onboard memory via SWARM. It also comes with some great customization options for advanced control such as polling rate, distance control, and angle snapping, the latter of which actually allows the mouse to predict pathing based on your general movement ignoring micro fluctuations in the pathing.

There is a lot here to leverage and while it's great to have this level of control it might be overwhelming for those new to gaming mouse software. Thankfully the Kone XP Air is completely usable plug and play so you won’t spend hours trying to get it functional. Illumination is handled in SWARM as well and allows you to tweak and adjust the five zones on the Air as well as the four zones on the Dock. They can be controlled independently or synced for a unified experience. Overall the software is robust, useful, and will allow you to create the exact experience you want for very specific situations.

The Kone XP Air from ROCCAT is an excellent wireless gaming mouse. It offers a host of features, is comfortable to use and its Easy-Shift Technology gives it a leg up on a lot of the competition. Competitively priced at USD $169.99, the Air is a solid mouse for gamers wanting to really hone in on the experience they want. The fact that four buttons essentially become unusable when Easy-Shift is engaged and software that can feel overwhelming are the only drawbacks I’ve experienced while using this mouse. Overall, I would recommend this mouse to gamers looking for a highly customizable, feature-rich, precision wireless mouse.