Last year, RHA released the original TrueConnect true wireless earbuds. They were acclaimed for their sound quality but a handful of small issues held them back from greatness. Now, they’re back again with the TrueConnect 2. They feature the same style but with improved battery life, connectivity, and call quality, RHA seems to have taken the feedback to heart. Are the TrueConnect 2s a worthy buy in a marketplace that’s more crowded than ever? Join us as we find out. 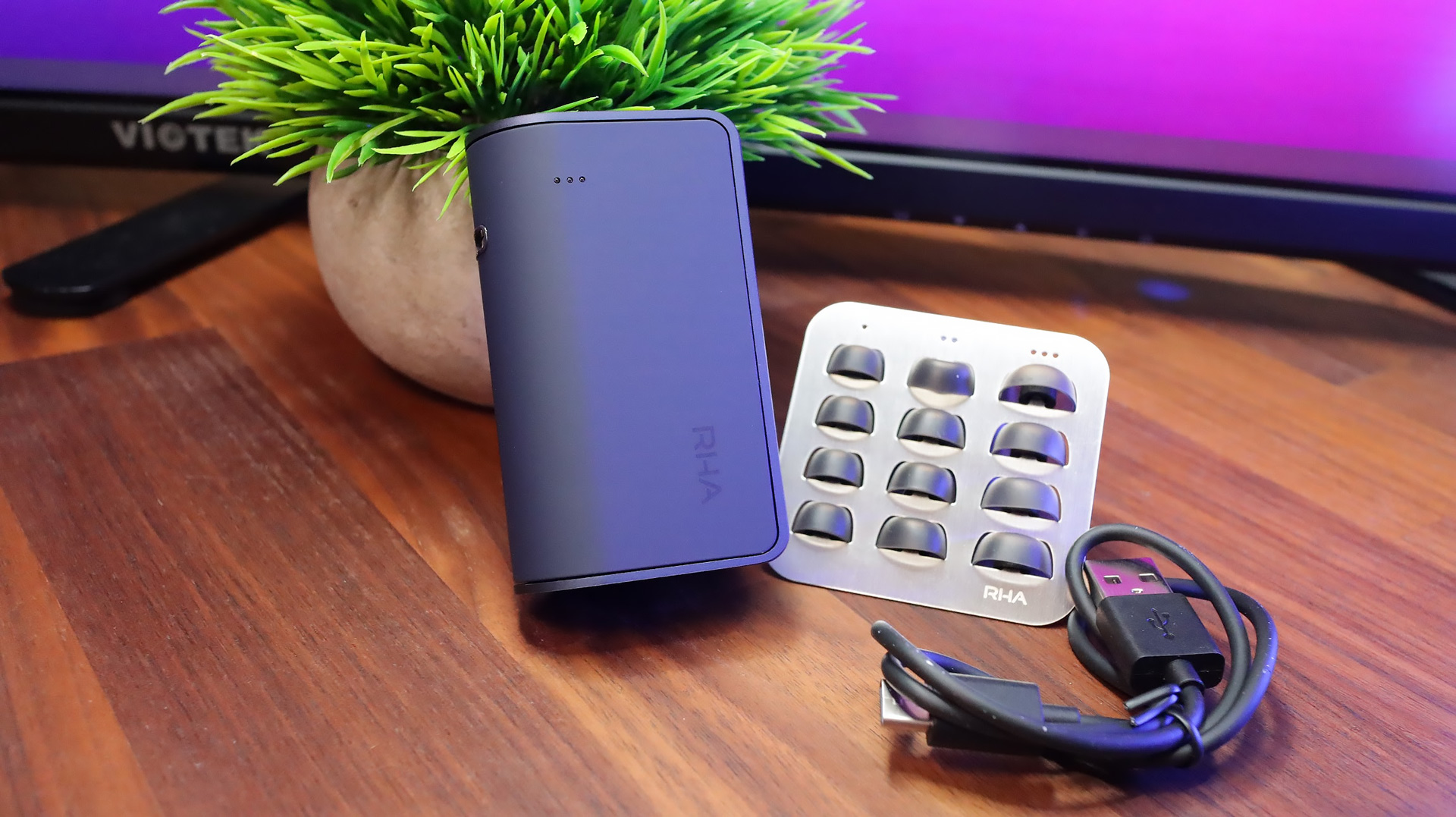 RHA is one of those brands that’s existed a step above the mainstream. Operating out of the U.K. since 2011, its products are marked by their refinement and, dare I say, elegance. The focus, thus far, has been on in-ear headphones and they’re marked by their metal shells, graceful contours, and the overwhelming sense that each model is a cut above what you would expect at the price. I’ve been lucky enough to try half a dozen pairs at this point and there’s a consideration and attention to detail here that’s not common — and that’s before getting to the sound which has always been great.

Take something as simple as the charging case. Instead of opting for the plastic egg used by what seems like everyone making true wireless earbuds today, the TrueConnect 2’s case uses a metal frame on a hinge to protect the earbuds. This is the same system RHA used on the original TrueConnects and it’s just as handsome here. The outside is coated in a soft-touch finish. It attracts fingerprints but isn’t slippery and feels very durable. I’ve dropped the original’s case multiple times without the buds spilling out and that’s not something I can say about most other brands I’ve drop tested. 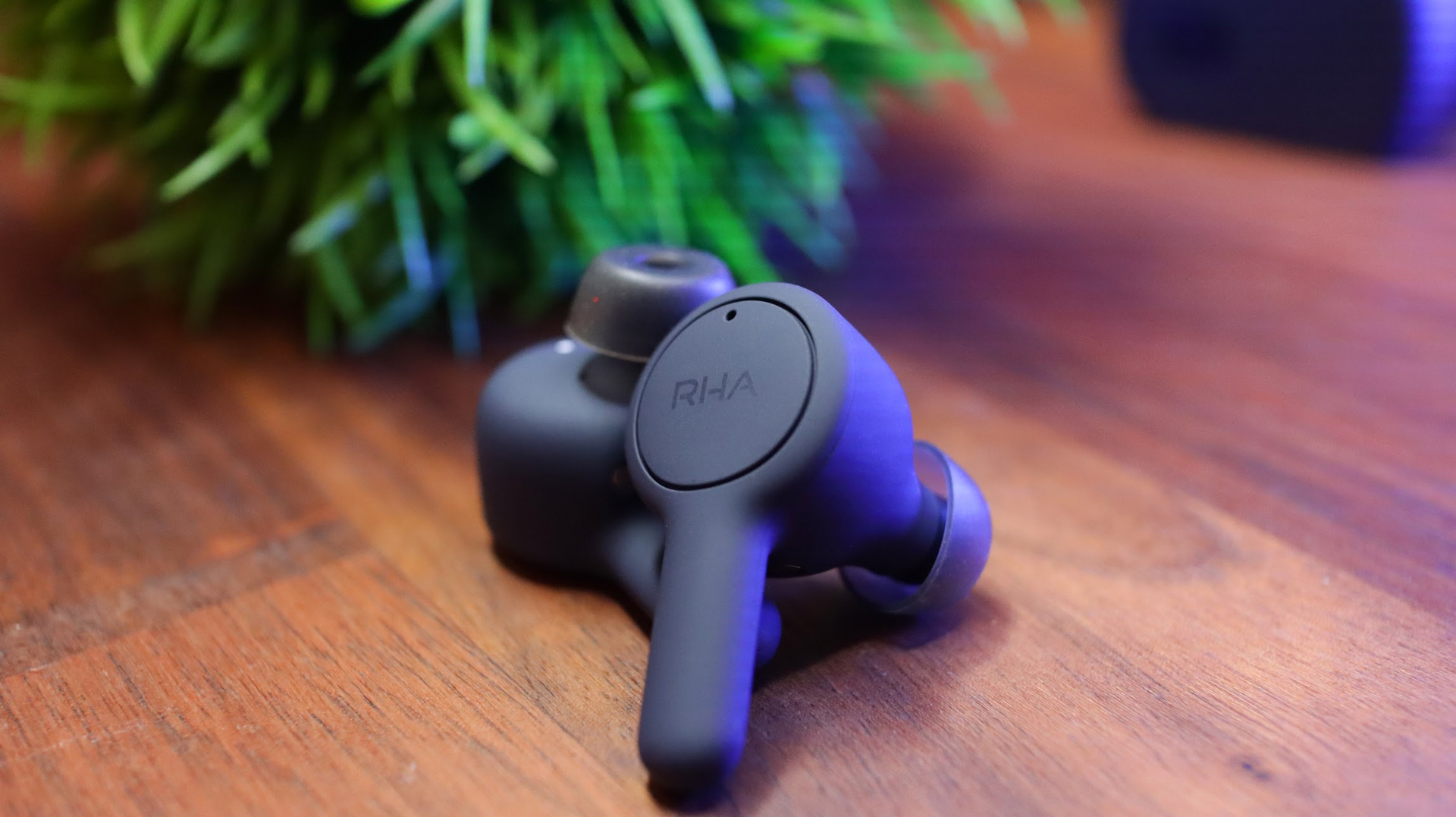 Then there are the earbuds themselves. They take inspiration from Apple’s earpods but have a larger, more circular enclosure. They’re also covered in a soft touch finish, so are easy to grab and adjust, and the logo blends into the colorway to make the branding subtle. Usually, circular earbuds are uncomfortable in my ears, but the nozzles are angled to match the ear canal and are long enough to keep the larger shell from pressing uncomfortably on my ear. They stay in place exceptionally well, even through vigorous shakes, making them a good fit for running or a trip to the gym. 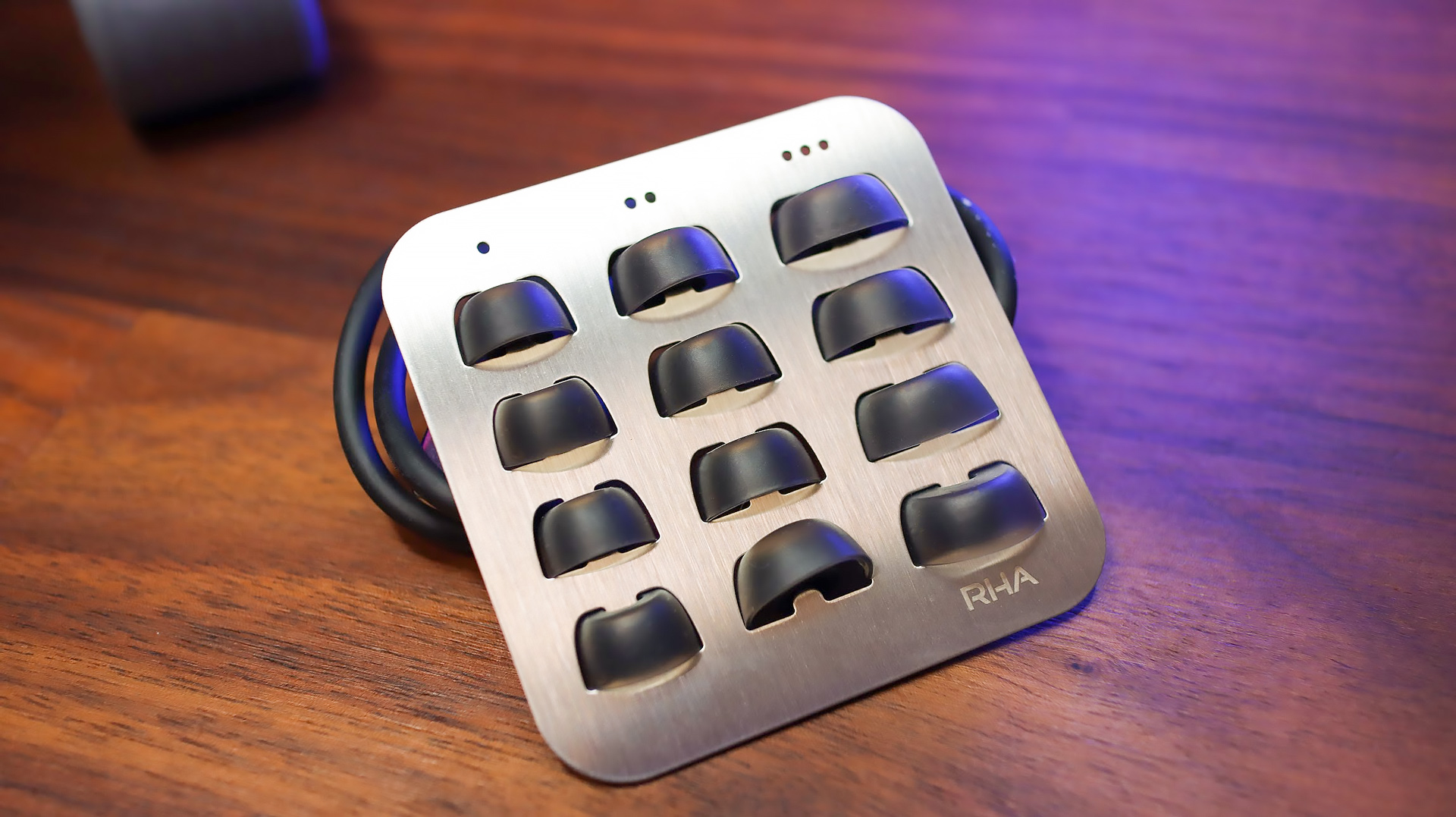 Also included in the box are a selection of silicone ear tips. The tips come on a brushed aluminum plate, which exemplifies RHA’s propensity for taking the extra step to make their products feel a cut above. A ear tip plate, in the grand scheme of things is small. Finding a specially printed metal sheet when you expected a half-penny plastic bag is a pleasant surprise that makes you feel like you’re getting more for your investment.

To my eye, the TrueConnect 2 are identical to their forebears. They’re the same size and shape, they have the same pleasant snugness in my ear. To my finger, the soft-touch finish feels a bit softer but that might be because it’s newer. The case is the same. You still drop the buds in stem first, which guides them right onto the charging pins. It still charges over USB Type-C and has the three tiny indicator lights to show its remaining battery.

RHA definitely took user feedback to heart with the TrueConnect 2s. They’re less about reinvention and more about refinement, and it’s a wholesale success. Let’s start with battery life. Each bud can now run for nine and half hours, instead of the original’s five. The case will give your four full recharges, leading to a total battery life of over 44 hours; the original was only 25 hours total. I’ve tested these measurements and found that they’re not that overstated, either. At 75% volume, I was able to run the earbuds for just over eight hours each. Easily enough for a whole day without dropping them back in the case, but if you do, 15 minutes will provide three hours of listening and just over an hour will recharge the buds completely. 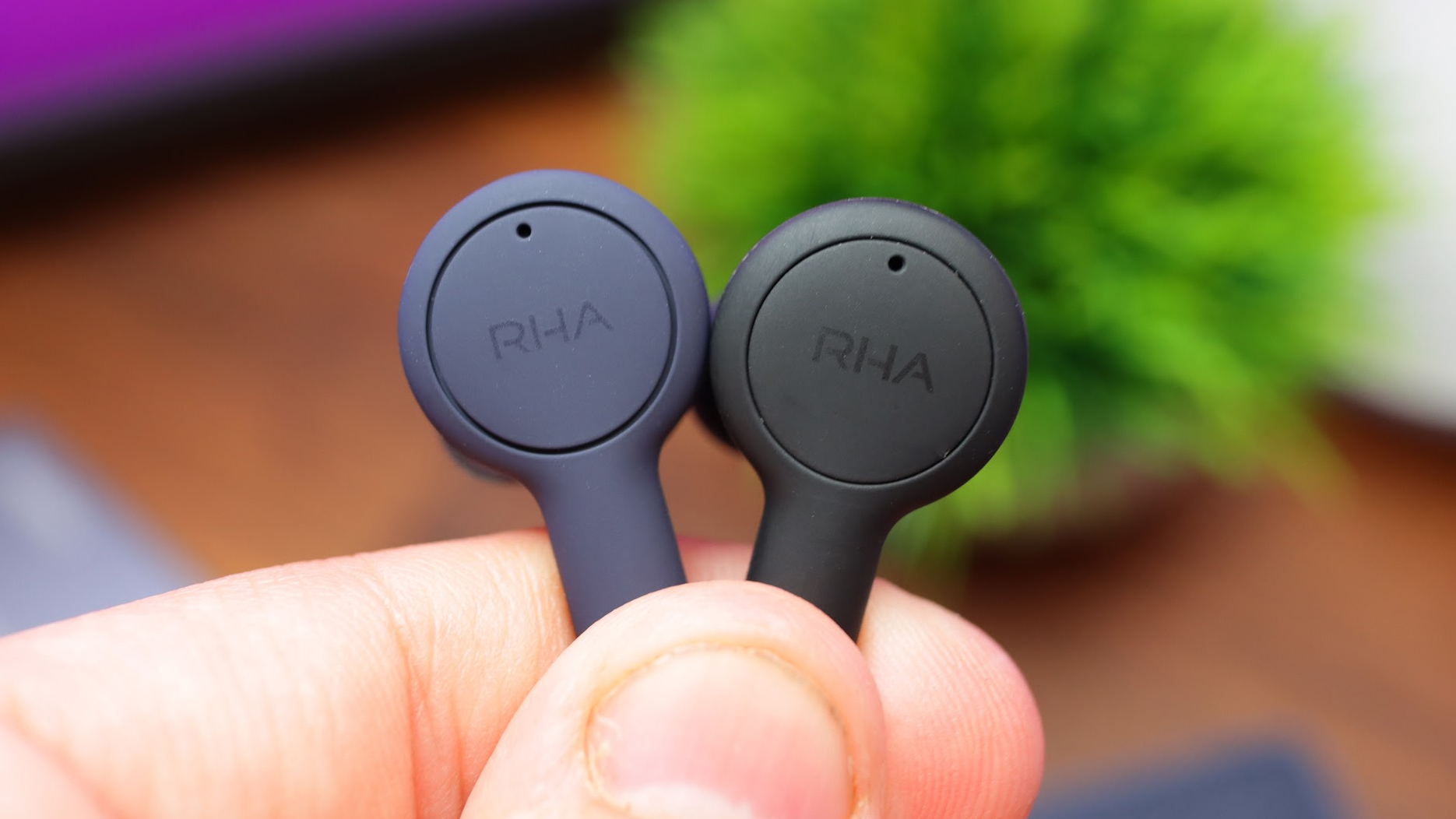 Yes, each. The hardware inside each bud has also been upgraded, allowing each bud to be used independently. As someone who listens to a lot of podcasts and audiobooks in one ear, this is a godsend feature.  They again connect over Bluetooth 5 but range and reliability have both been improved. The original TrueConnects had an awful tendency to skip when obstructed, even when adjusting them in your ear. That problem has been completely solved, and I’m not able to walk multiple rooms away, through two walls, before the signal thins. The only trouble I had with connectivity was when using the earbuds with my PC. Then, so much as turning my head would cause the signal to cut, but I think this is more likely the result of the motherboard than the earbuds.

Call quality has also received a major bump. While the original worked well enough for calls, sometimes people reported me sounding more muffled on the TrueConnects than my other headsets. Again, problem raised, problem solved. The TrueConnect 2s have added a second microphone to each earbud. It now features one on the bottom of the stem, to pick up your voice, and one rear microphone to monitor and cancel background noise. Background noise rejection seemed to depend on how constant it was, but overall clarity was much improved and on par with most premium true wireless earbuds.

Finally, in a surprising move, the single button on each earbud has now been shifted to capacitive touch. It works well, but takes some getting used to. With a combination of taps and holds, you’re able to control your media, take calls, and summon your virtual assistant. Be prepared to spend a couple days acclimating, though. Capacitive touch requires more care to prevent accidental adjustments, so instead of tapping to answer and end a call, hanging up now requires a short hold, for example. This shift may also be related to the improved IP55 rating over the original’s IPX5, which means it now protects against dust ingress and jets of water.

Improvements all around, but that doesn’t mean there aren’t areas where these buds could still improve. IP55 is okay but still falls short of some of the compelling competition. I would also love to see some kind of transparency mode to quickly hear your surroundings. If you did take these out for a run, they so effectively block out ambient noise that you would struggle to be aware of your surroundings. 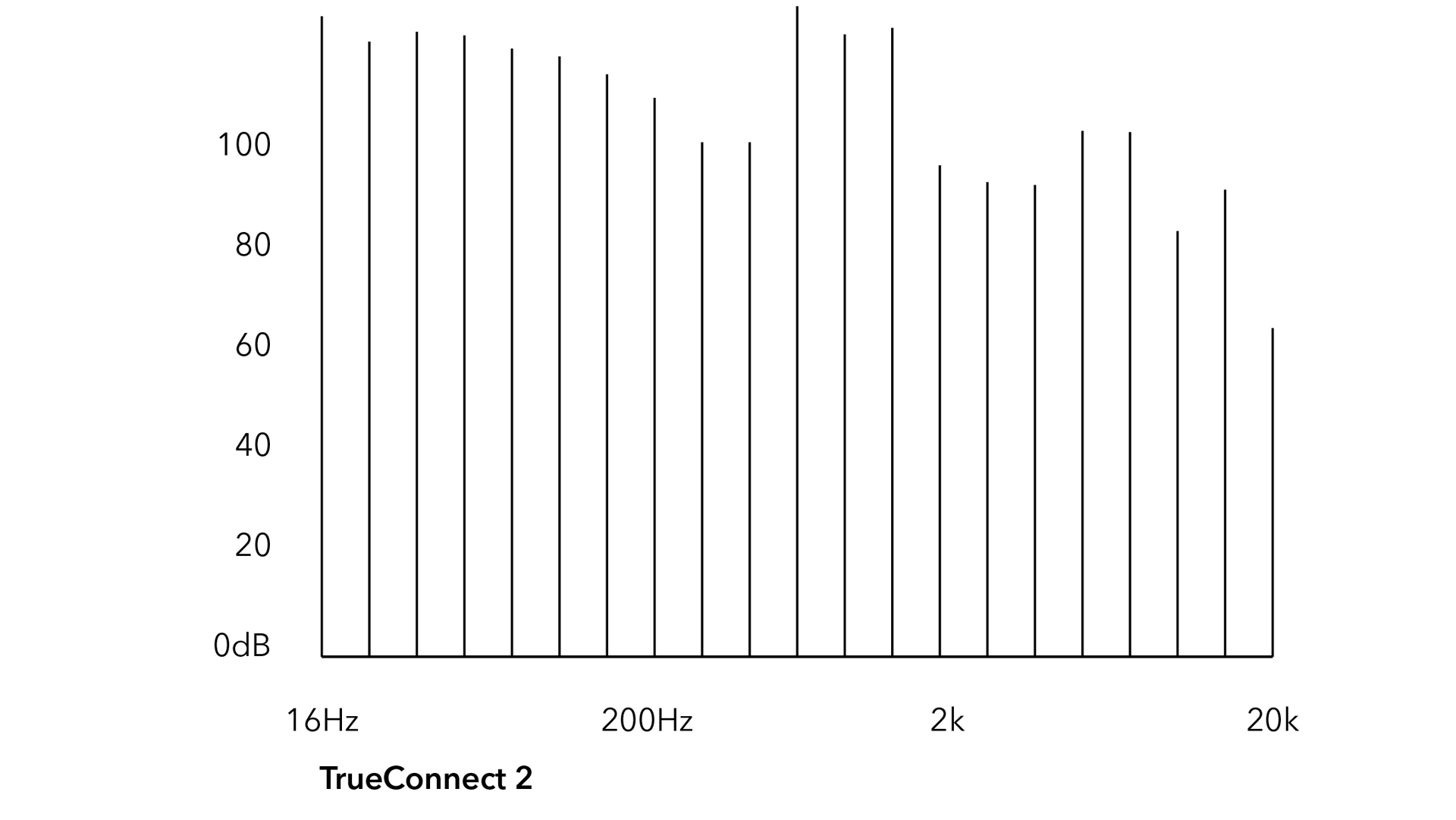 When it comes to sound, the TrueConnect 2s are very similar to the originals. They’re definitely tuned to drive, which again makes them great as an exercise bud. The bass has a big bump and there’s another spike between 1,000-2000Hz, which is where many voices lives and brings males vocals forward in the mix. Treble on the other hand is more gentle. These aren’t a detail oriented headphone, but they’re also not fatiguing.

Listening to Eminem’s Sing for the Moment, the bass guitar/synth made a full bed, deeper than even the kick drum. The TrueConnect 2s didn’t thump but have a good sub-bass thrum. In Tool’s Schism, the middle hump made the chunky, distorted guitars come right to the forefront, even ahead of the vocal. Paring things back with Coheed and Cambria’s Pearl of the Stars live at NAMM 2011, the acoustic guitars came through clean but never piercing, making for an easy and enjoyable listen.

For gaming, they’re less of a fit. Over mobile or connected to the PC, there is a perceptible latency. When watching videos, this isn’t an issue but it’s a delay you can feel in first-person shooters. The soundstage is also fairly close. If don’t play games where tight synchronicity is important, these will get the job done, but for dedicated gaming, it’s probably best to plug in your trusty wired headphones. 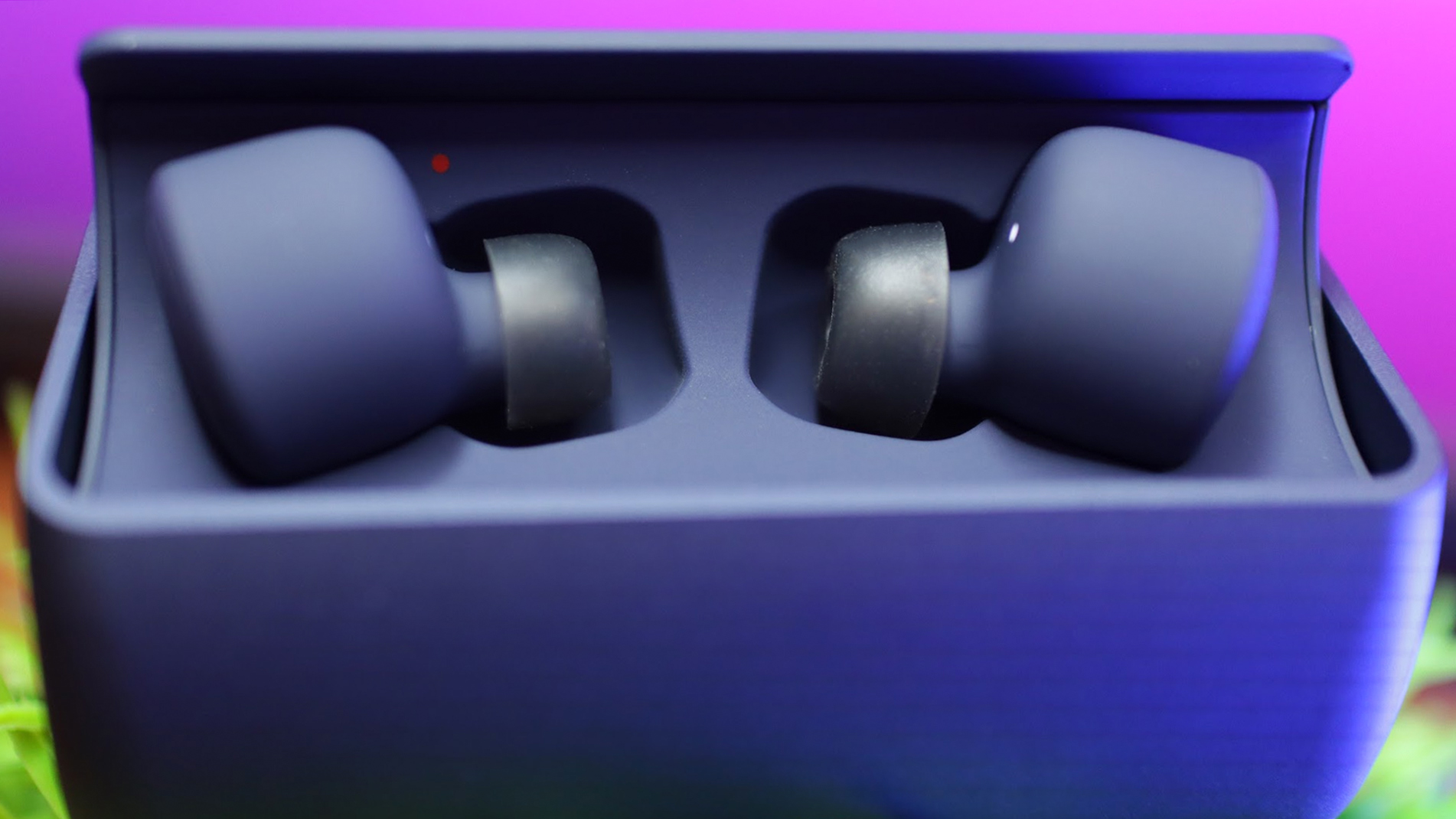 The RHA TrueConnect 2s are a substantial and welcome improvement over the original. Two of the big issues I found with the original, connection stability and call quality, have been completely solved with this model. Improved battery life and the ability to use each independently are also solid upgrades that improve the overall experience. I love their energetic sound, which is great for exercise or really anything where you want to be “pumped up.” There’s still room for improvement, especially for mobile and PC gaming, but at $149, these are a solid choice.

The product described in this article was provided by the manufacturer for evaluation purposes.
8.0Great
Pros
Cons
Tags
audio
Lifestyle Tech
True Wireless