Razer is no slouch when it comes to gaming peripherals, churning out everything from gaming monitors to keyboards and mice to even a cool mask you can wear while you play. The company is knee-deep in an All Chroma Everything phase, inserting as much RGB TLC as they can across their product line. The latest to get the multicolor glow-up? The Wolverine V2 Xbox and PC controller, which just saw a new Chroma version launch for $100. This controller is more than just a rainbow upgrade, however, as there are a few more additions to the controller that make it a fantastic option. 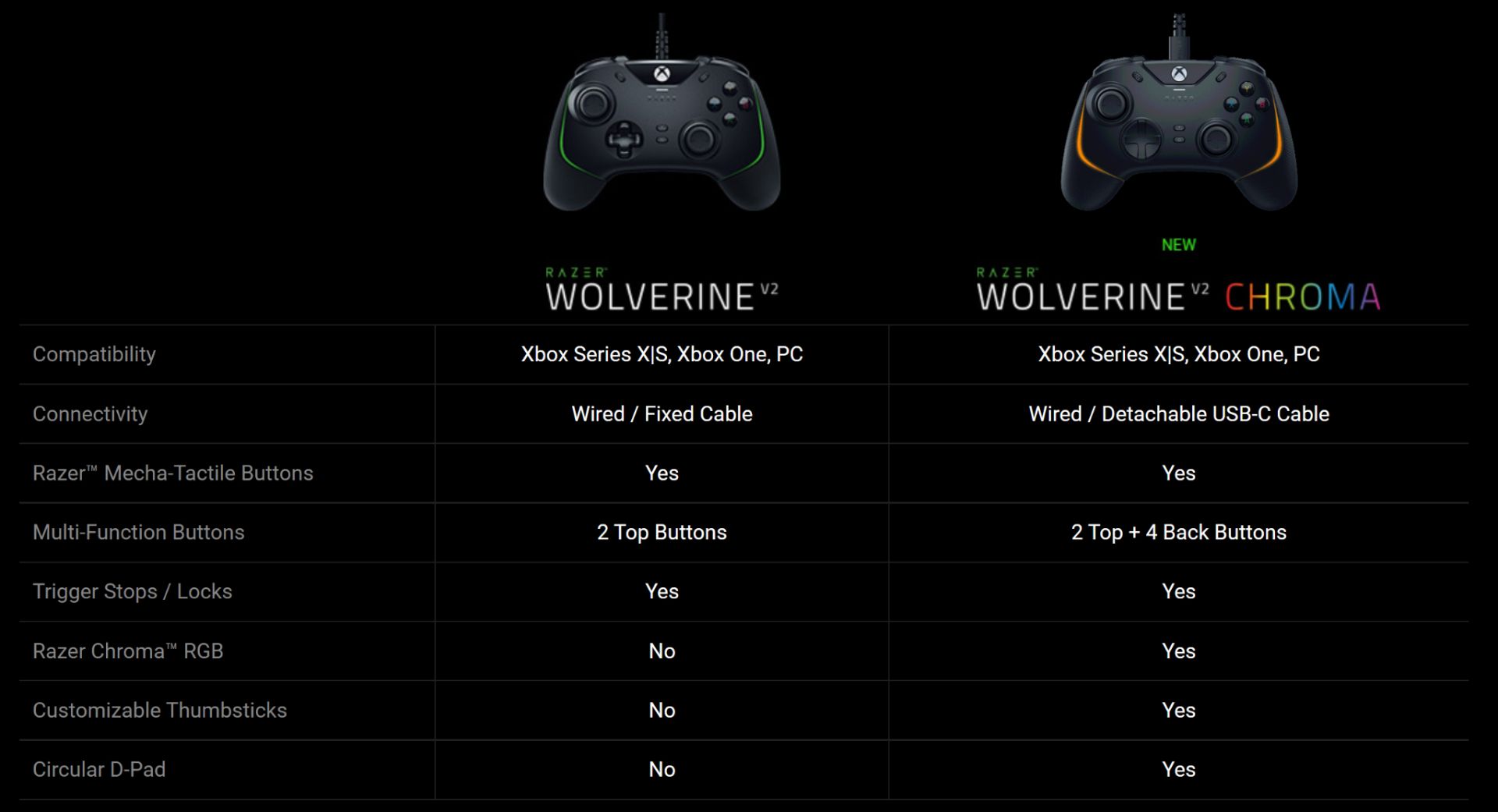 First and foremost, the most noticeable difference between the previous Wolverine V2 and the Chroma is the wire. The Chroma is still wired, yes, but where the original V2 had a fixed wire that never came out the Chroma comes with a detachable USB-C cable. My mind thinks fondly of the original Xbox's breakaway cables designed for those times a random animal or person would walk through the gaming area, ripping the controllers from the consoles with a kick of the foot. This new USB-C cable feels like a design change with that in mind, giving a little more peace to those playing in a high-traffic area. 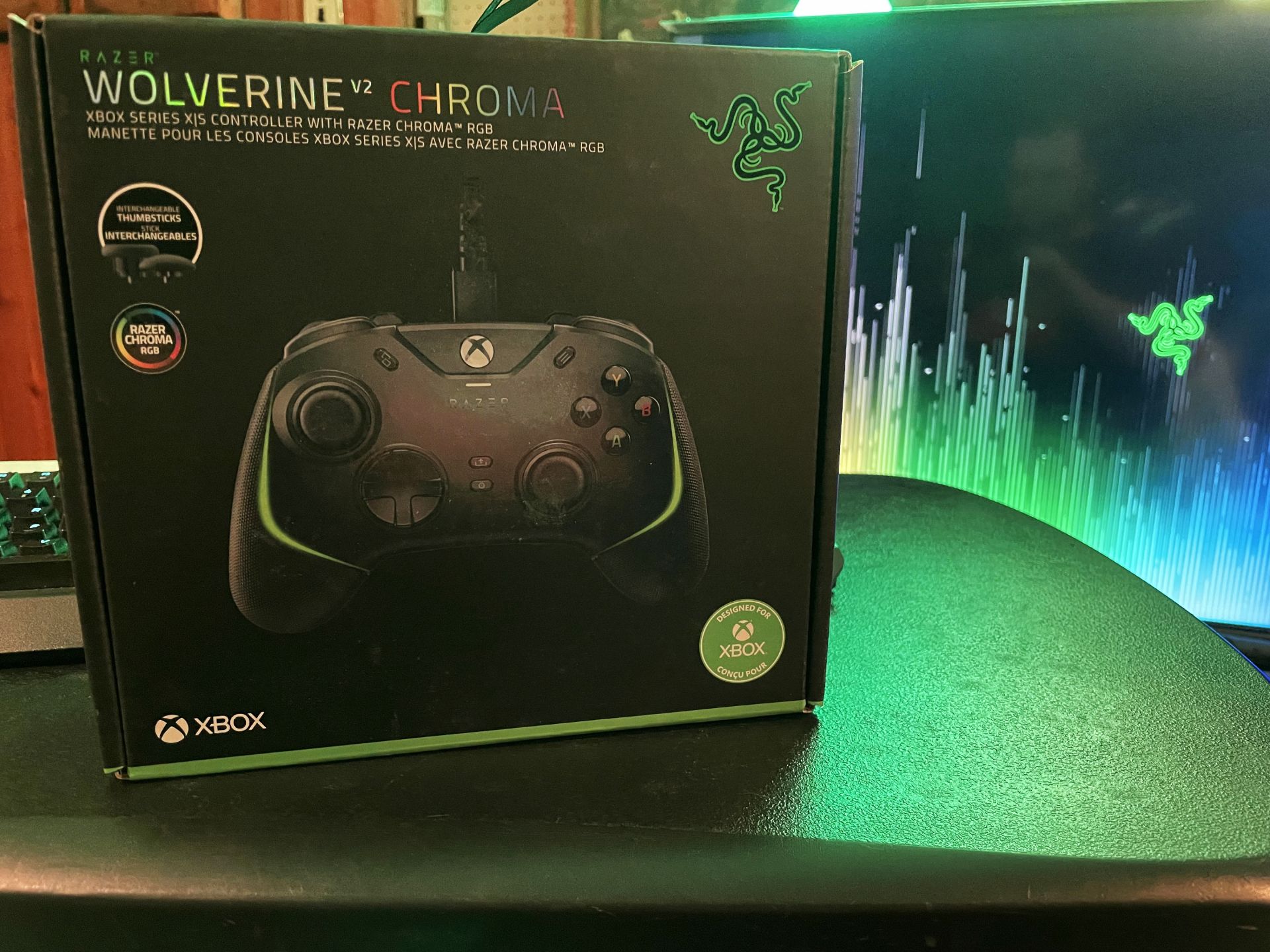 The next big addition is four more buttons added to the back of the controller, buttons that are completely customizable on both PC and Xbox via the corresponding Razer app. This personalization allows me to play any game I want how I want to play it, as well as create multiple profiles so I can set my buttons for different games. The agency I feel in being able to program this controller to be whatever I want makes me appreciate it more than the normal Xbox controller. That one, as classic as it is, is stuck in its ways.

As this is the Chroma version of the Wolverine V2, there are of course RGB customization options as well. The choices are admittedly limited compared to other Razer RGB products--giving me only three options for how I want the RGB to look--but having the choice is still appreciated. I've discovered I'm a "Breathing" RGB user; static is just boring. The controller also comes with separate thumbsticks for even more customization, but the sticks already on the controller are super comfortable on their own. 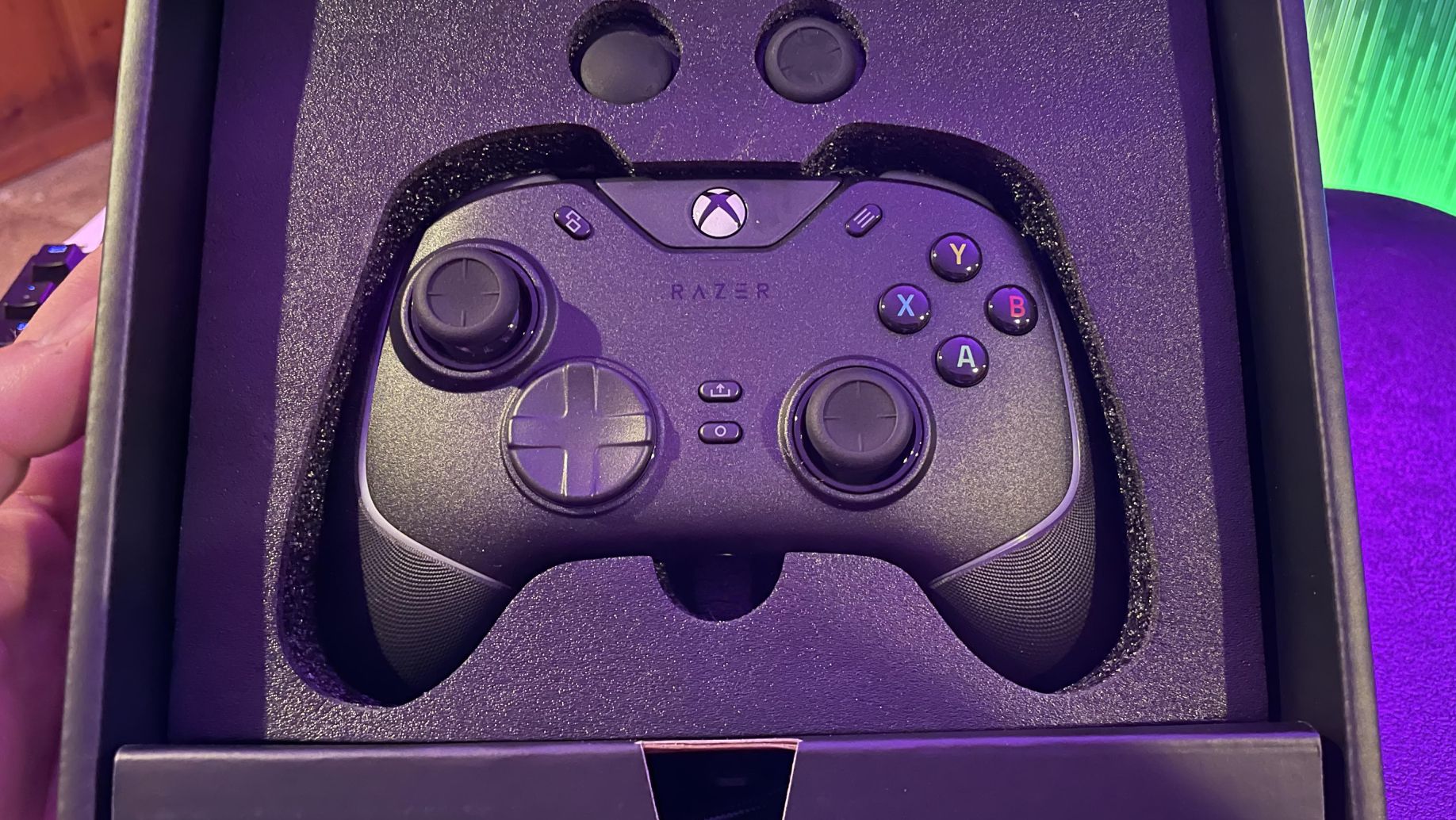 The Wolverine V2 Chroma was tested using multiple games on both PC and console, and with every game, the controller performed incredibly well.

First was the recent Halo Infinite Technical Test over the weekend, where I played multiple Social Arena matches via Steam on PC. The tactile buttons on the Wolverine V2 Chroma made every shot feel weighty, like I was firing the gun itself and not just pressing the button. This applies to the buttons as well, with each button emitting a satisfying "click" every time I press down. There's more resistance than in other controllers, making each button press have more impact. Furthermore, the customizable back controllers were brilliant in these matches, giving me a level of comfort while playing Halo I haven't felt in years. This controller is well-suited for the new Halo based on my time in the test, and I'm hoping that feeling holds true when the game launches. 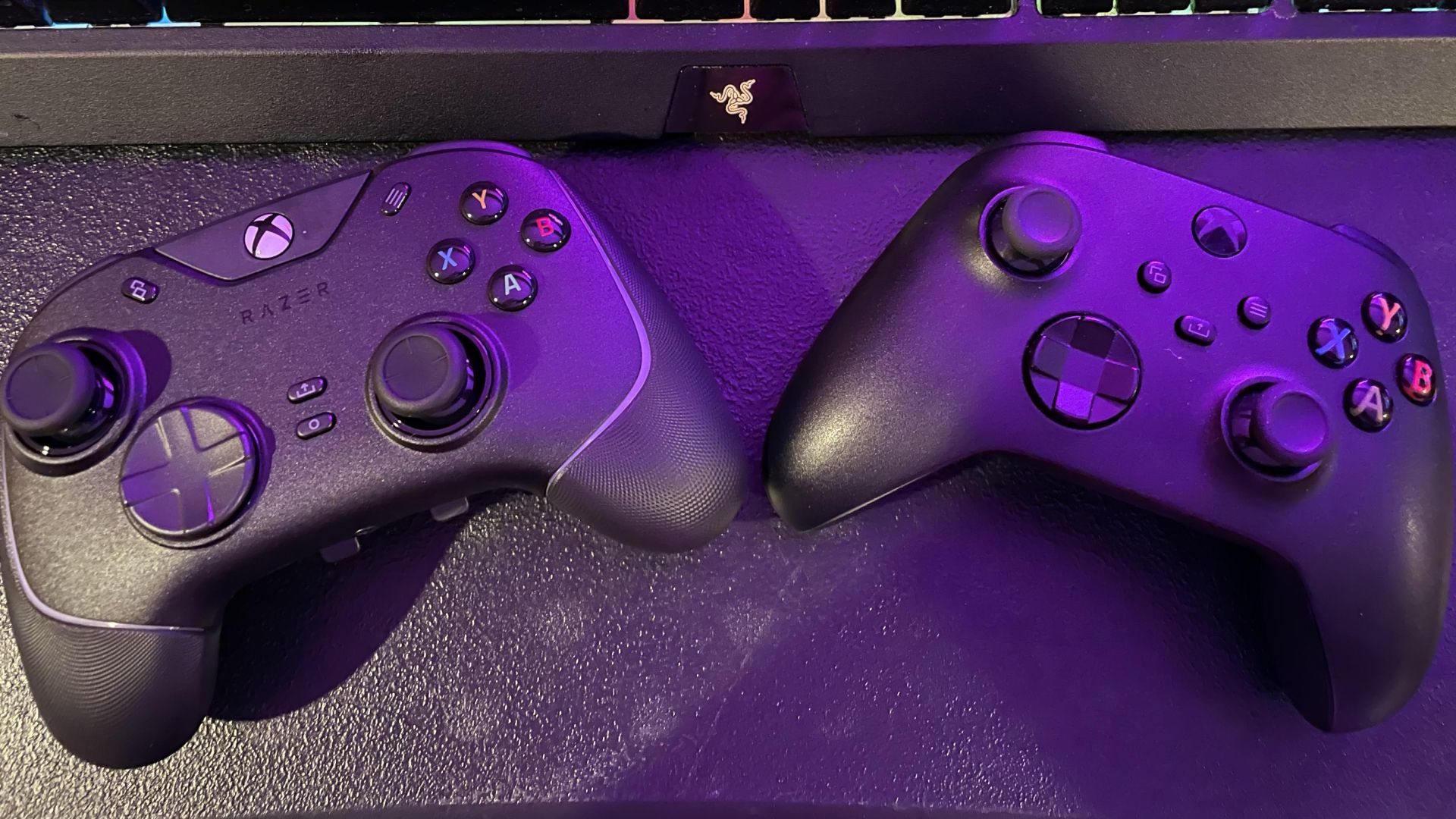 The next game used to test the controller is one far more frenetic: Dragon Ball FighterZ. I play a lot of fighting games, so I wanted to see how these buttons fared while throwing out wild combos in DBFZ. The controller performed...fine, I guess? Maybe it's just me being used to the core Xbox controller, but the extra tactile nature of the buttons on the Chroma which worked well for Halo did not work quite as well for DBFZ. I routinely dropped combos thinking a button was pressed, realizing later that I didn't hear the "click" of the tactile buttons on the controller. This may be a case of just having to get used to a new controller, but in the early going, fast fighting games may not be the Wolverine V2 Chroma's strong suit.

The final game I used to test the controller was Fortnite, this time shifting from the PC to the Xbox Series X. Now Fortnite is a game I've been playing for quite a while--almost exactly a year, to be more specific. I know what Fortnite is supposed to "feel" like on a controller, and here the Wolverine V2 Chroma knocked my expectations out of the park. Similar to Halo, each button press felt like it made an impact, from jumping to avoid fire to firing back at the opponents. The customizable buttons didn't make as much of an impression on me here as they did in Halo, but they did offer some advantages. I wouldn't blame that on the controller though; that's more of an "I'm too used to the normal control scheme" problem. 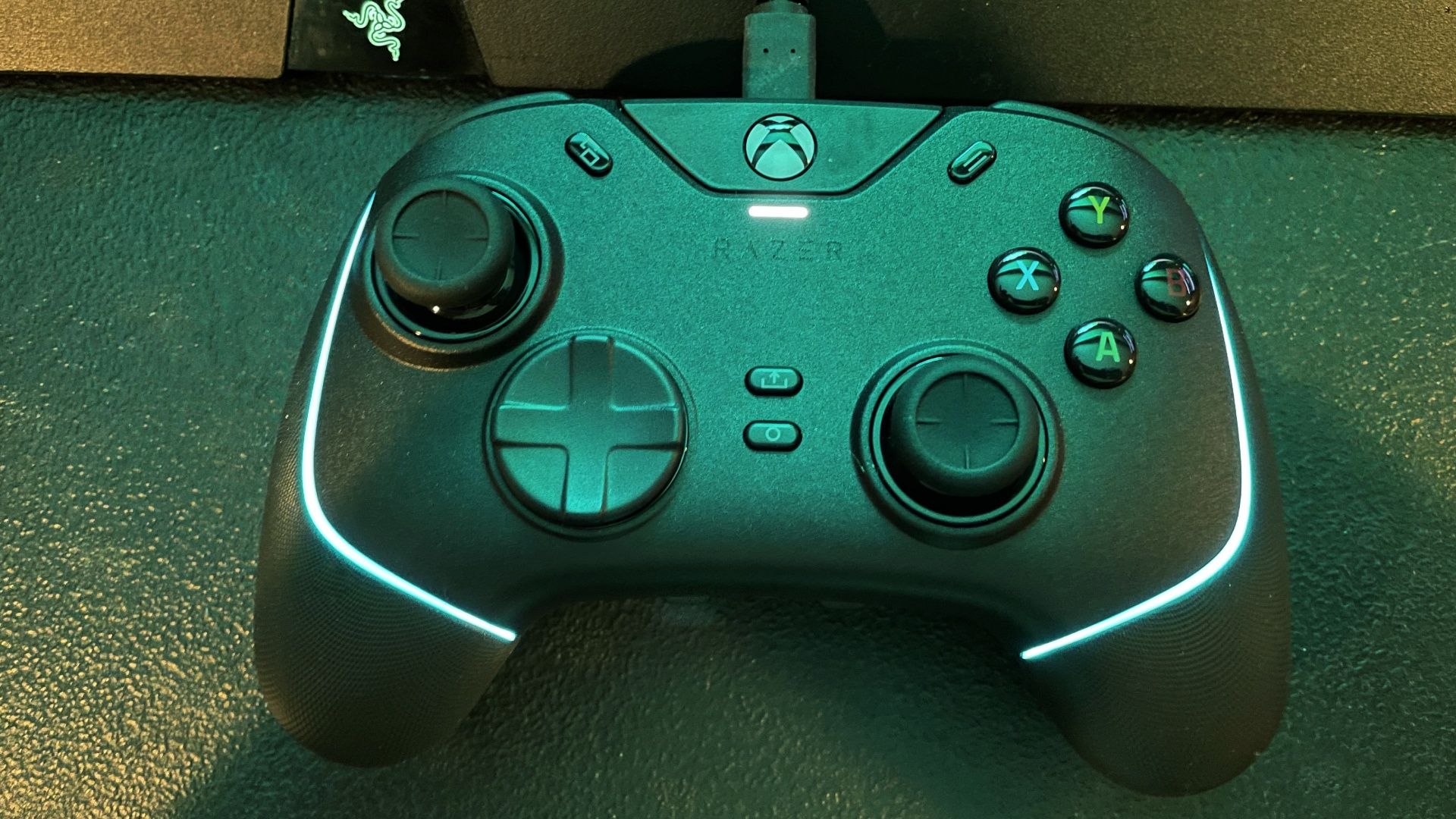 The Razer Wolverine V2 Chroma is a remarkable controller, making a fantastic substitute for the standard Xbox controller. The customization options both in extra button layout and RGB format make it feel more my own, rather than the traditional design that comes with every console. The tactile buttons have some weight to them, though this can be more of a curse than a blessing depending on the game being played. One key thing to remember, though, is that this controller is wired, not wireless, and that could be a problem for some folks. Despite that, this controller certainly has a place in my personal rotation of controllers from here on out, and once you get your hands on it I expect you'll feel the same way.

The product described in this article was provided by the manufacturer for evaluation purposes.
9.0Amazing
Pros
Cons
Tags
razer
controllers
Razer Wolverine V2